Intel’s new flagship Haswell-E platform is finally alive and I can tell you that yes, this is the fastest system we have used to date. READ ME!

Sometimes writing these reviews can be pretty anti-climactic. With all of the official and leaked information released about Haswell-E over the last six to nine months, there isn't much more to divulge that can truly be called revolutionary. Yes, we are looking at the new king of the enthusiast market with an 8-core processor that not only brings a 33% increase in core count over the previous generation Ivy Bridge-E and Sandy Bridge-E platforms, but also includes the adoption of the DDR4 memory specification, which allows for high density and high speed memory subsystems.

And along with the new processor on a modified socket (though still LGA2011) comes a new chipset with some interesting new features. If you were left wanting for USB 3.0 or Thunderbolt on X79, then you are going to love what you see with X99. Did you think you needed some more SATA ports to really liven up your pool of hard drives? Retail boards are going to have you covered.

Again, just like last time, you will find a set of three processors that are coming into the market at the same time. These offerings range from the $999 price point and go down to the much more reasonable cost of $389. But this time there are more interesting decisions to be made based on specification differences in the family. Do the changes that Intel made in the sub-$1000 SKUs make it a better or worse buy for users looking to finally upgrade?

Today's launch of the Intel Core i7-5960X processor continues on the company's path of enthusiast branded parts that are built off of a subset of the workstation and server market. It is no secret that some Xeon branded processors will work in X79 motherboards and the same is true of the upcoming Haswell-EP series (with its X99 platform) launching today. As an enthusiast though, I think we can agree that it doesn't really matter how a processor like this comes about, as long as it continues to occur well into the future. 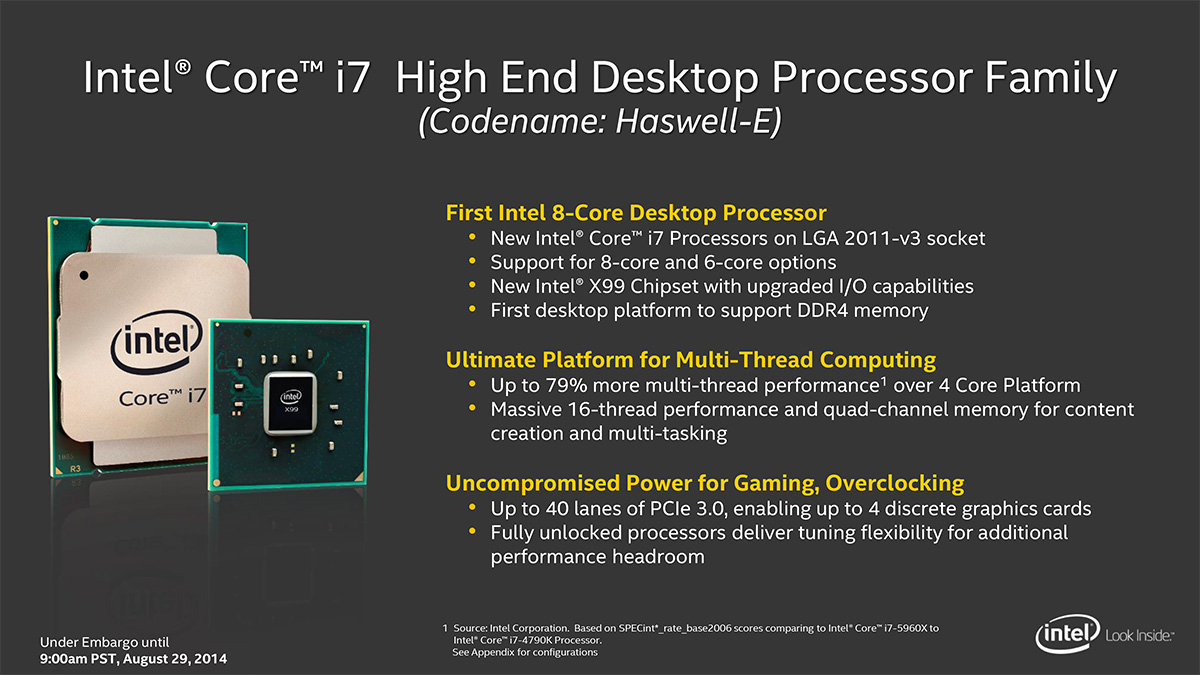 The Core i7-5960X processor is an 8-core, 16-thread design built on what is essentially the same architecture we saw released with the mainstream Haswell parts released in June of 2013. There are some important differences of course, including the lack of integrated graphics and the move from DDR3 to DDR4 for system memory. The underlying microarchitecture remains unchanged, though. Previously known as the Haswell-E platform, the Core i7-5960X continues Intel's trend of releasing enthusiast/workstation grade platforms that are based on an existing mainstream architecture.

With IVB-E platforms maxing out at a 6-core design, and the mainstream Haswell designs peaking at 4 cores, the jump up to 8-cores will instantly result in some impressive performance increases in applications that are heavily multi-threaded. All Haswell-E, Core i7-5000 SKUs are going to be unlocked for easy overclocking. As you'll see in a couple of pages, my results in that area are going to drastically change overall performance comparisons. 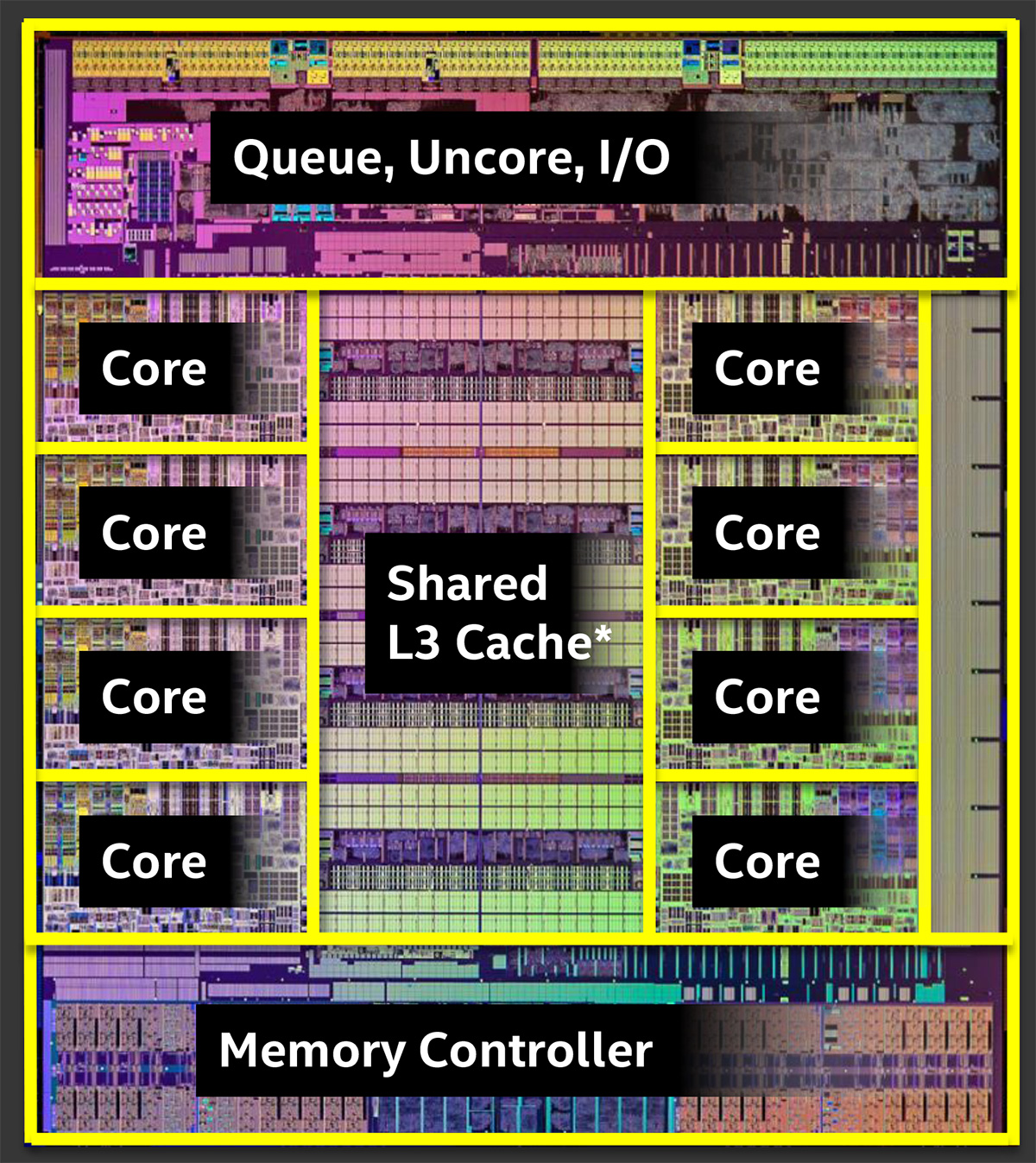 Haswell-E is based on the same 22nm process technology as the standard Haswell CPUs, but with an increase of the transistor count from 1.4 billion to 2.6 billion, thanks to the doubling of processor cores and because of the massive 20MB of last level cache on-board. Die size jumps up to 355 mm2 on Haswell-E compared to 177 mm2 on Haswell. 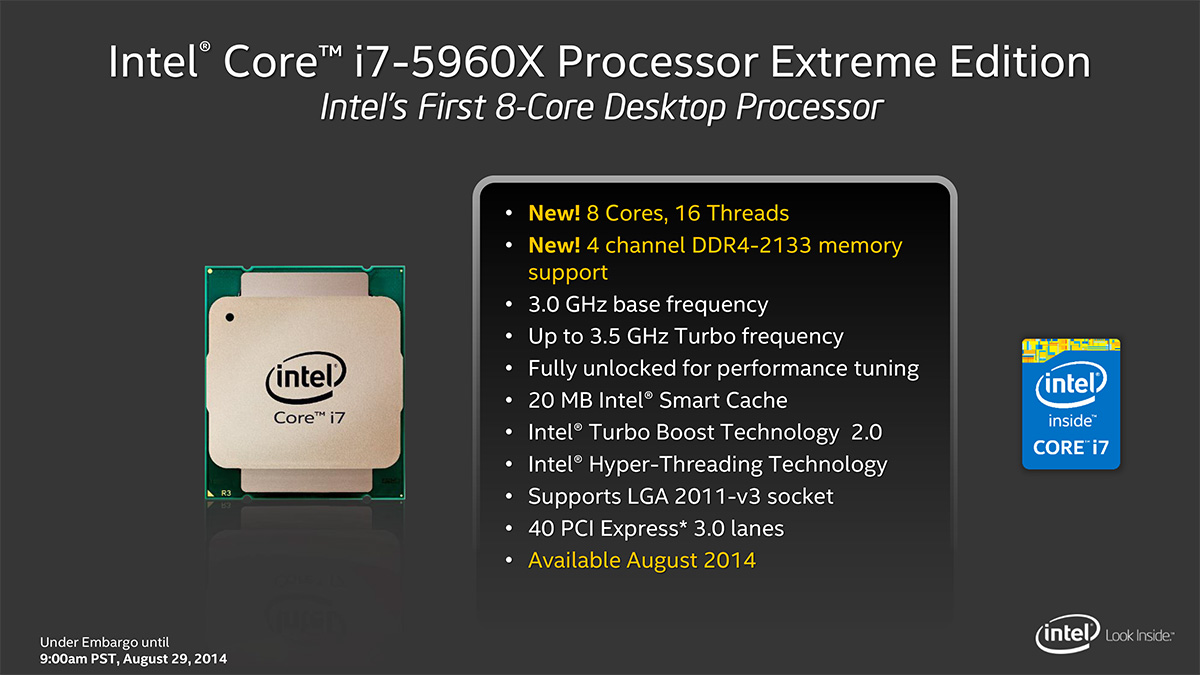 Although there are (officially) three processors launching today, we only really have a single part in for testing, the flagship Core i7-5960X, which marks the return of Intel Extreme Edition CPUs. Unfortunately, that also means a return of the $1000 price tag! The rated specifications are mind blowing though: 8-cores and 16-threads, quad-channel DDR4 memory support and  20MB of LLC. The base clock of the processor is only 3.0 GHz with a peak Turbo Boost of 3.5 GHz, but overclocking beyond that is going to be really easy it seems. As we have seen in previous E-grade processor releases, we have 40 lanes of PCI Express, though fully PCIe 3.0 compliant now.

The other two models being launched by Intel have some different numbers in front of them. The Core i7-5930K drops from 8-cores to 6-cores (still with HyperThreading) and the 20MB of LLC does down to 15MB. You still have DDR4, quad-channel memory support and 40 lanes of PCIe 3.0. The clock speed increases by 500 MHz on the base clock and 200 MHz on the Turbo Boost speed, resulting in better performance for single threaded applications.

But let's not forget the recently released Devil's Canyon CPUs. With a price tag that is $50 under the cost of the Core i7-5820K, the Core i7-4790K only has a 4-core design and DDR3 memory support, but those cores are running 700-800 MHz faster than the lowest priced Haswell-E. For buyers that are concerned about single threaded performance, a 4.0 GHz base clock speed could look pretty tempting over the 3.0 GHz base clock of the Core i7-5960X. But buyers more interested in multi-threading have options with both 6-core and 8-core Haswell-E launching today.

Later we'll show you how the Core i7-5960X and the Core i7-4790K compare (as well with many other CPUs) in our benchmarks. Next, let's learn about the new X99 chipset and what the platform brings to the table.