The X99 Platform and Motherboards

When Ivy Bridge-E launched, it was socket drop-in compatible with existing X79 motherboards that launched with the Sandy Bridge-E processor years earlier. Some boards required BIOS updates to work but, for the most part, it was a seamless transition. Companies, like ASUS, MSI and Gigabyte, used the IVB-E launch as an excuse to refresh the X79 platform in some cases with new motherboard models, but for the most part it was business as usual.

That isn't the case with Haswell-E: it requires a new chipset and platform for several reasons. Thus, enter the X99 chipset. 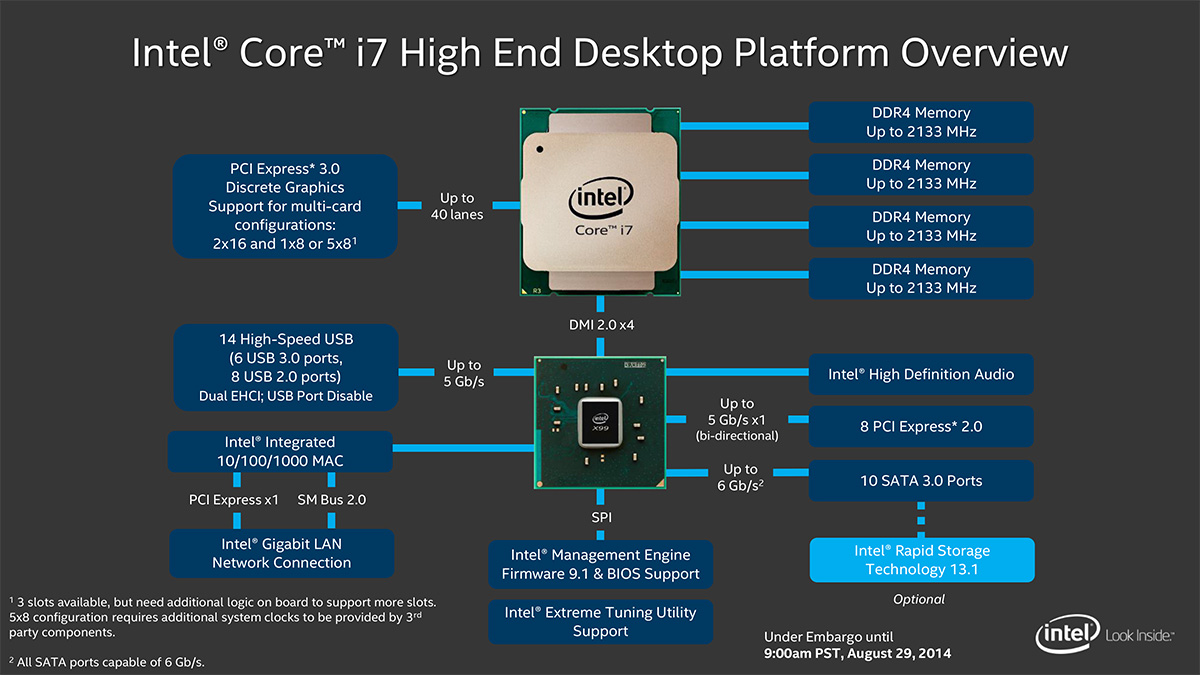 The diagram above shows off the major feature set of the X99 platform. The 40 lanes of PCI Express 3.0 and four channels of DDR4 memory (up to 2133 MHz officially supported) come from the Haswell-E CPU itself, but the X99 chipset offers up some changes as well.

Starting with USB connectivity, X99 offers 14 total USB channels, 6 of which are USB 3.0. All of that funnels into a single 5 Gb/s tunnel back to the chipset, so don't expect to use all of that USB at the same time a peak performance. Intel has integrated a 10/100/1000 NIC for networking and then uses a single lane of PCIe and SM Bus to offer up the Intel Gigabit network controller at high performance levels. Both analog and digital, 8-channel audio remain intact, and there are 8 available lanes of PCIe 2.0 on the chipset as well that board vendors can use to integrate other components. Again, keep in mind that has to converge into a single 5 Gbps connection, so those lanes are more for connectivity than for high performance accessories.

There are 10 SATA connections on X99 as well, all of which can support SATA 6G speeds! The only downside to this is that they are broken up into two "pools" on the chipset – a set of 6 and a set of 4. So while you can run 6-drive RAID configurations on the X99 platform, you cannot run 10-drive arrays on the Intel controller.

It's also a bit of a let down to see DMI 2.0 x4 as the interconnect between all of this I/O and the processor. That connection tops out at 20 Gb/s, well under the theoretical "peak" performance of all the components contained in the X99 chipset.

Comparing the new Haswell-E to Ivy Bridge-E, you can see definite platform and performance improvements. The minimum core count of HSW-E is now 6, rather than 4, and the maximum core count jumps from 6 to 8. Shared cache improves by 25% and the move to DDR4 memory will mean better memory density and better performance (though by how much is debatable). It is great to see the Intel chipset update to support more than two SATA 6G connections, and this also marks the first E-class part to allow BCLK overclocking. 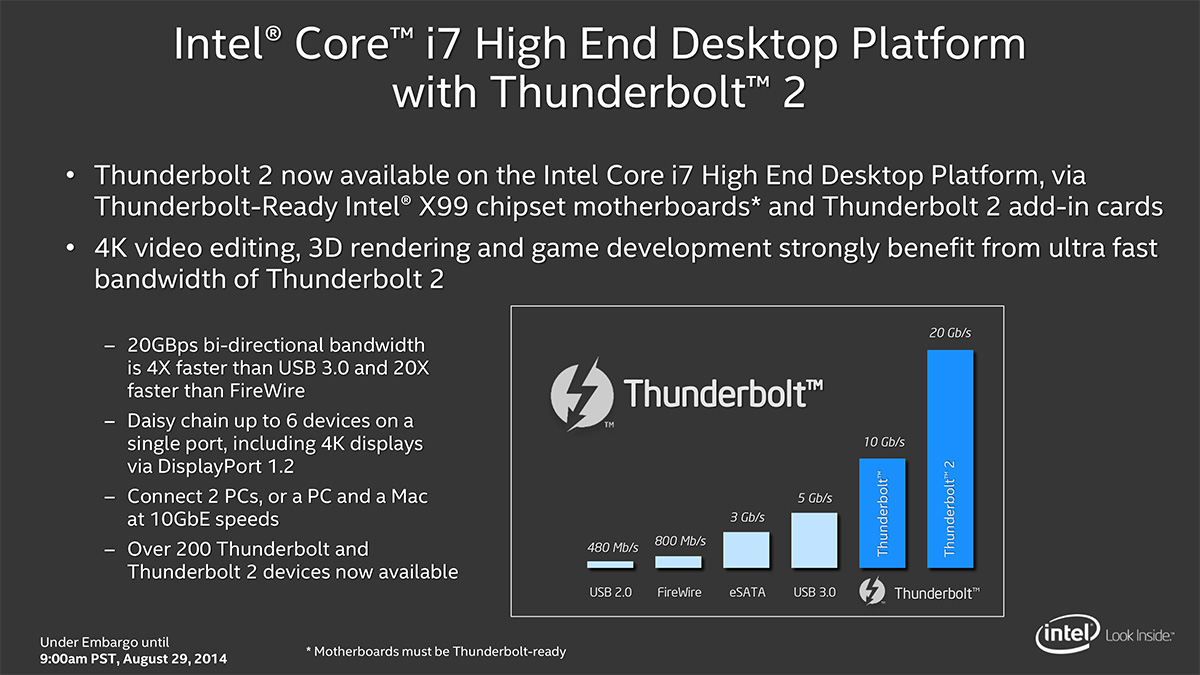 With X99 comes the first time we will see Thunderbolt capability on the E-class platforms, although this is dependent on a Thunderbolt add-in card. ASUS is the only company making Thunderbolt add-on cards currently, and the X99-Deluxe that we used for initial testing does have the necessary header to support the installation of the ThunderboltEX II/Dual two-port controller. This card supports two connections at 20 Gb/s each (bi-directional) and really enhance external connectivity performance for users that have TB accessories or want to dive into that market. I will admit that Thunderbolt build up has been slower than I had wanted but when you see it in action (on say an external RAID array) you'll understand the impact it can have. 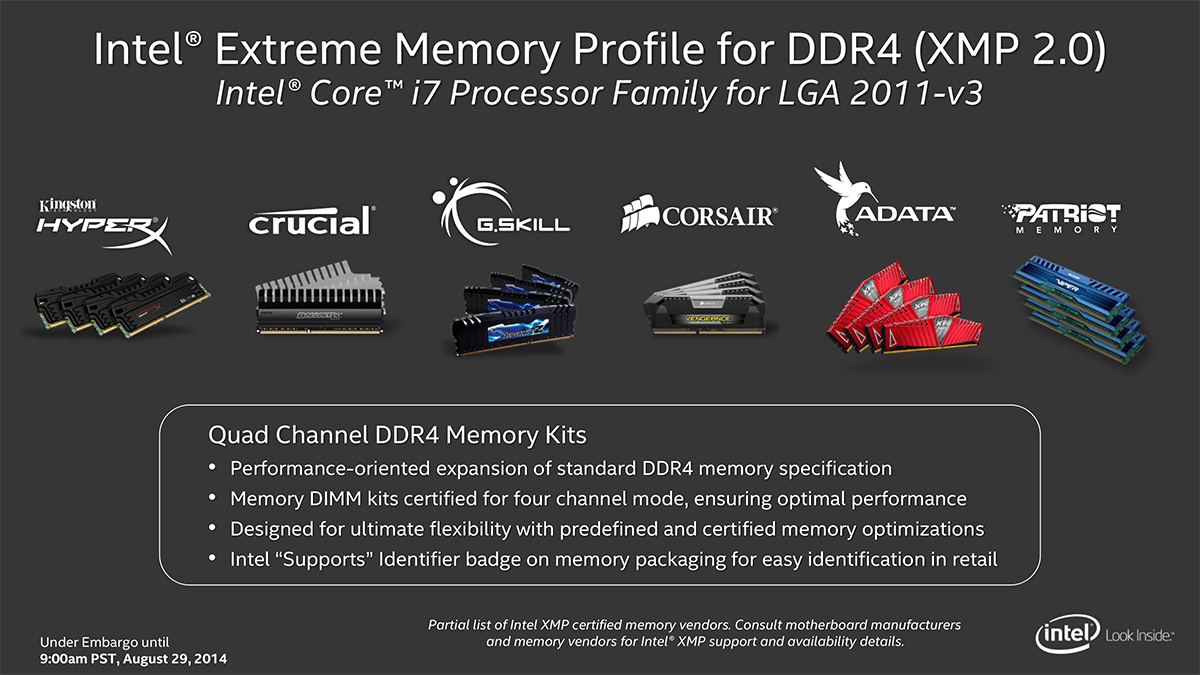 With the X99 chipset and the Haswell-E processor comes the first consumer applications of DDR4 memory. Along with it come questions of performance and cost. As we have seen with other major DDR revisions (DDR to DDR2, DDR2 to DDR3), the initial performance of entry-level DDR4 will likely be slightly slower than that of high-end, overclocked DDR3 modules. Still, the quad-channel nature of the controller in Haswell-E results in impressive bandwidth results (at the expense of latency, slightly) that you'll see in our SiSoft results.

We have already seen memory from vendors like Corsair and Kinsgton online and for sale, but I am hesitant to put any weight behind those prices. We'll see how the market looks over the next 1-2 weeks, but I would expect to be paying a premium for DDR4 for some time. 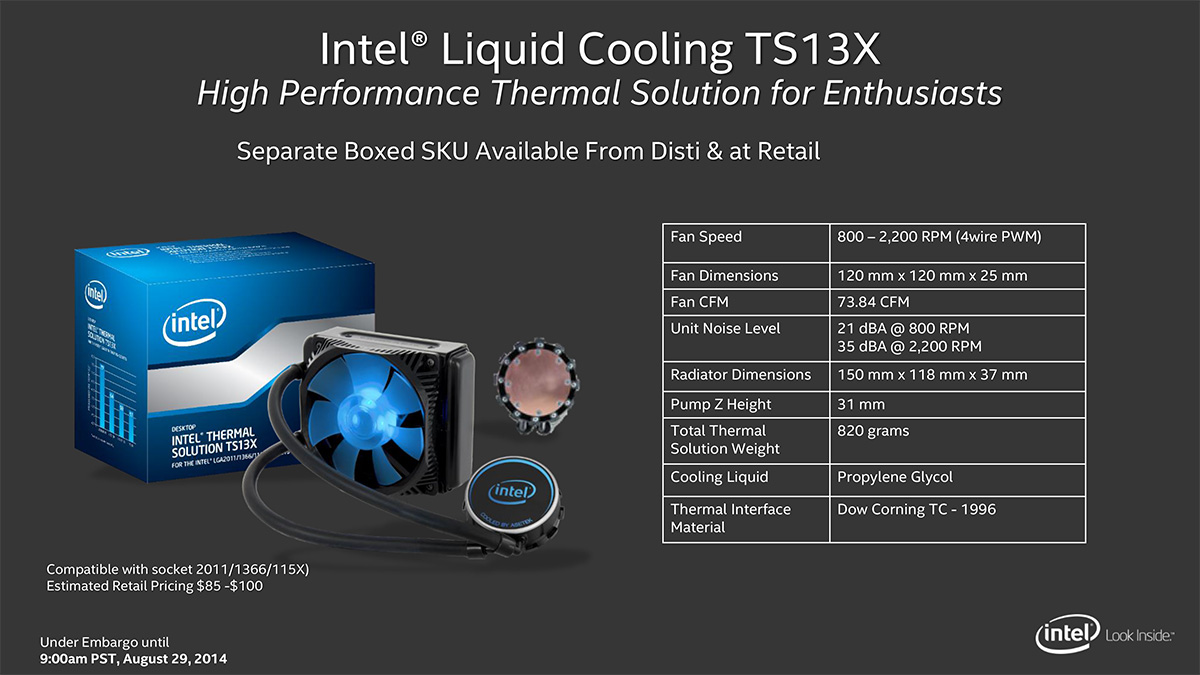 The retail box options of the Core i7-5960X (and the rest of HSW-E) will ship without coolers, which is something that Intel has been doing for enthusiast-targeted CPUs for some time. It just makes sense – more than likely a buyer of part like this has their own cooler or favorite brand they plan on sticking to. If not, Intel will be selling the TS13X self-contained water cooler for just under $100.