One of the key target markets for the new Haswell-E processor and the X99 chipset is high end, enthusiast PC gamers and in particular those of you willing to dive into multi-GPU configurations. For a quick look at how the new Core i7-5960X + X99 compares to other high end options, we ran some games on three different systems, all using a set of three NVIDIA GeForce GTX 780 Ti graphics cards in SLI.

The first system was the ASUS X99-Deluxe motherboard and the Core i7-5960X processor, the target of our review today. The second system is our standard GPU test bed: the Core i7-3960X Sandy Bridge-E processor and ASUS X79 Rampage IV Extreme motherboard. Finally, to get some data for the "conservative crazy PC gamer" I put together a system using the Core i7-4790K on a Z87 motherboard with a PLX bridge chip, enabling 3- and 4-Way SLI configurations. 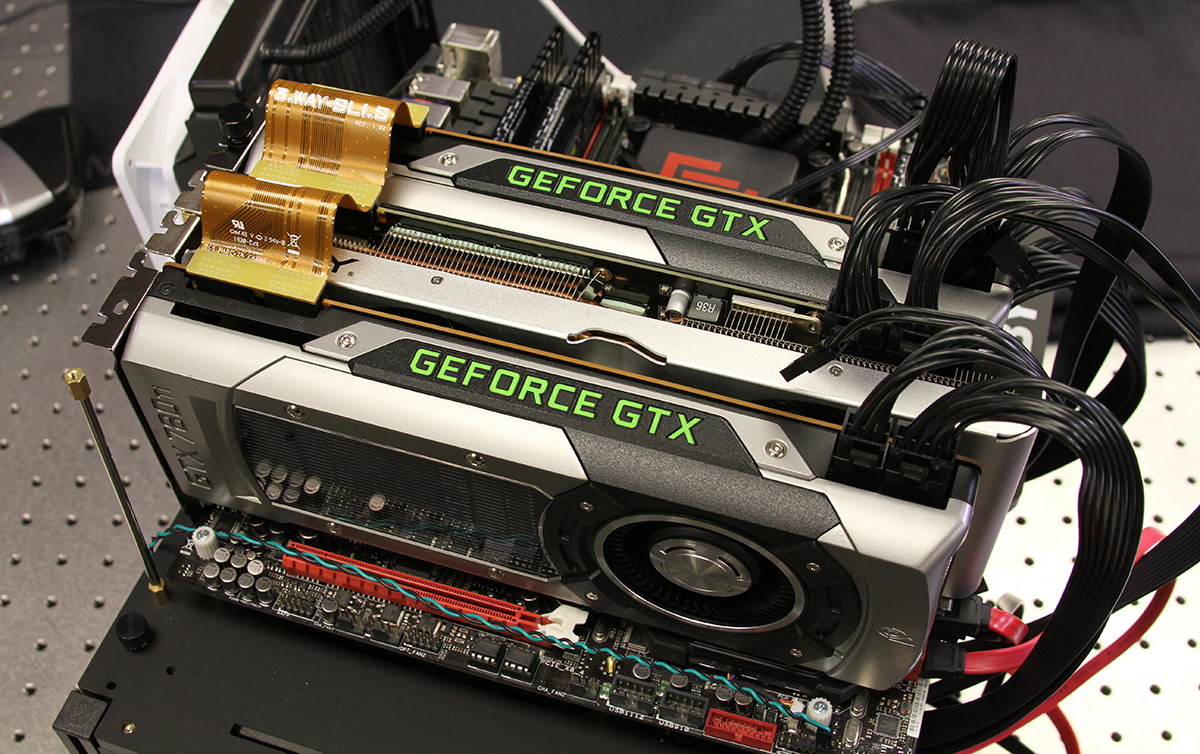 I used the 340.52 driver that was the latest beta from NVIDIA's website. We are looking to see if the X99 platform and the new HSW-E processor can improve on multi-GPU scaling in any way. Or, does the higher single threaded clock speed of the Core i7-4790K still mean more to gaming despite claims that game engines continue to breach into multi-threadedness?

Games were tested at a resolution of 3840×2160, or 4K to really push the GPUs as hard as possible. This also helps approximate performance of multi-display gaming (Eyefinity or Surround) due to the high pixel count.

If you are new to the way we test graphics card and systems, these graphs below are going to be a bit confusing. We use a system I call Frame Rating that uses direct capture of the GPU display output and then uses post processing to measure observed performance. Especially when diving into the world of multiple GPUs in a single system, on-system performance measurements like FRAPS can misrepresent what the gamer sees thanks to micro-stuttering and more. 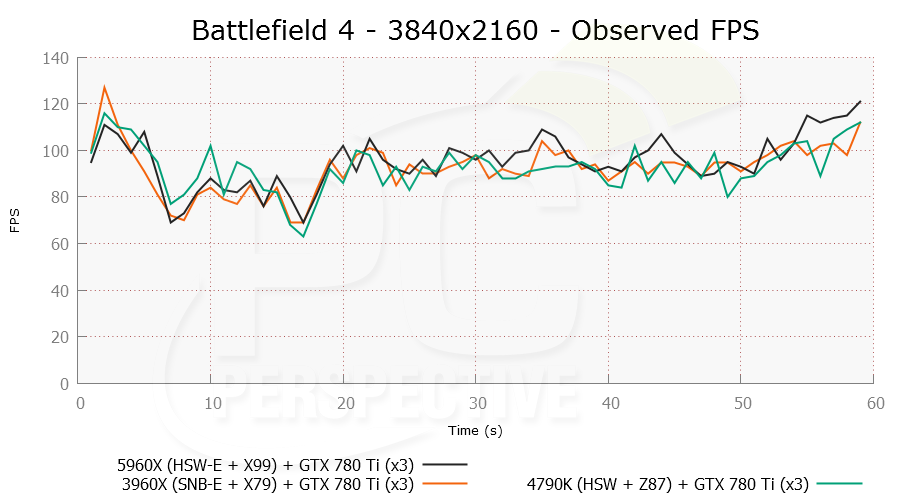 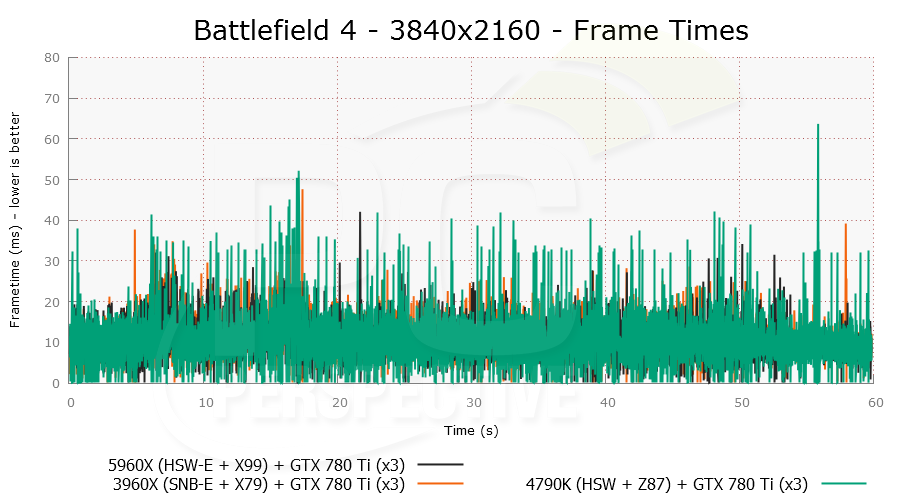 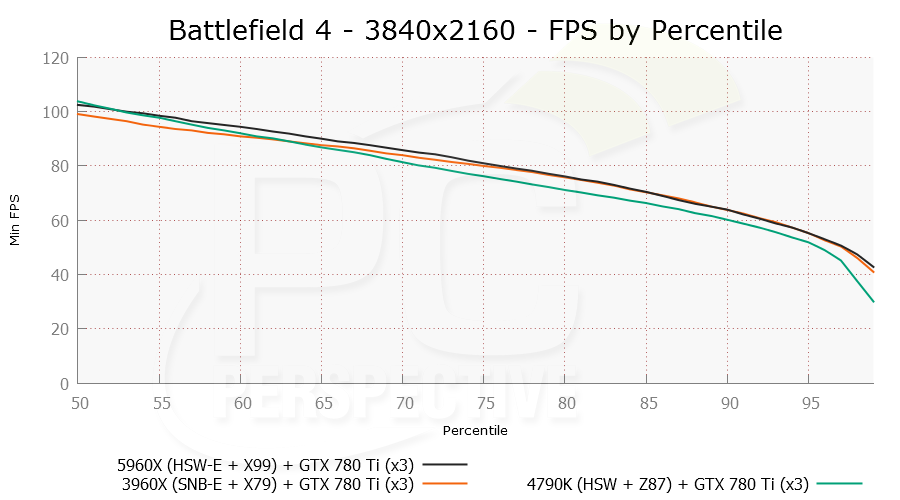 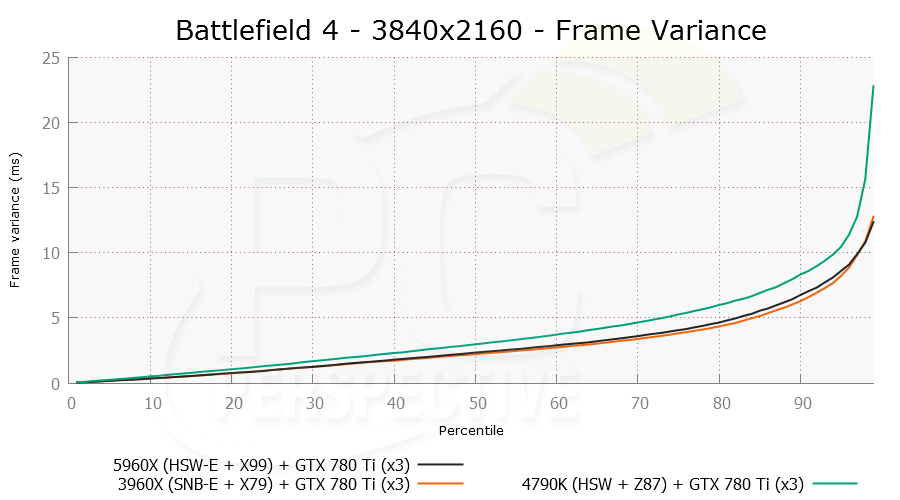 The first thing we notice in the Observed FPS graph is that the performance on all three platforms is very close when looking at average frame rate. All three results range between 99 and 104 FPS on average.

The frame times graph, shows us individual frame times. The wider the line is on the Y-axis, the more frame time variance there is and usually indicates frame stutter. Triple and quad-GPU systems tend to have a lot more issues with delivering consistent frames times, and I see no advantage between any of the three test setups in the case.

A quick glance at the Frame Variance shows that we are seeing more than 5ms of frame time variance (that's noticeable) for 20% of the frames rendered (above the 80th percentile). That's not great, but it does appear that the Core i7-4790K has slightly MORE variance than either SNB-E or HSW-E, telling us that the base Haswell platform is slightly underperforming. 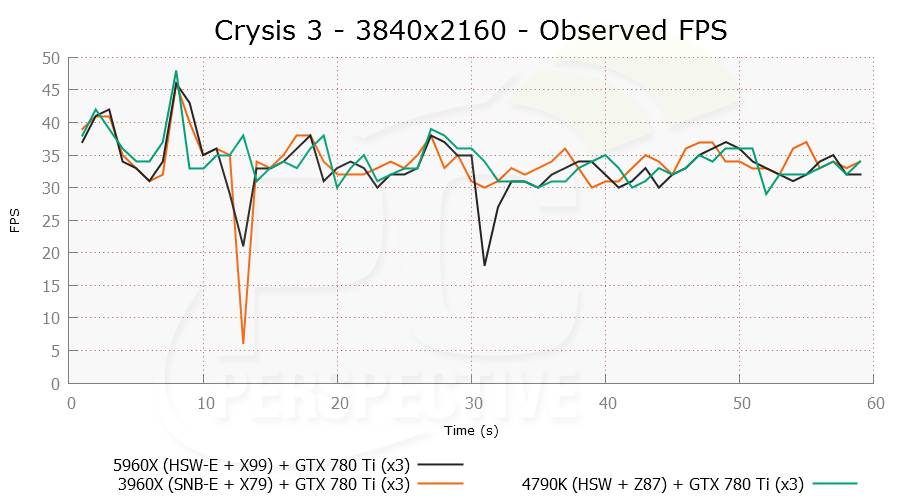 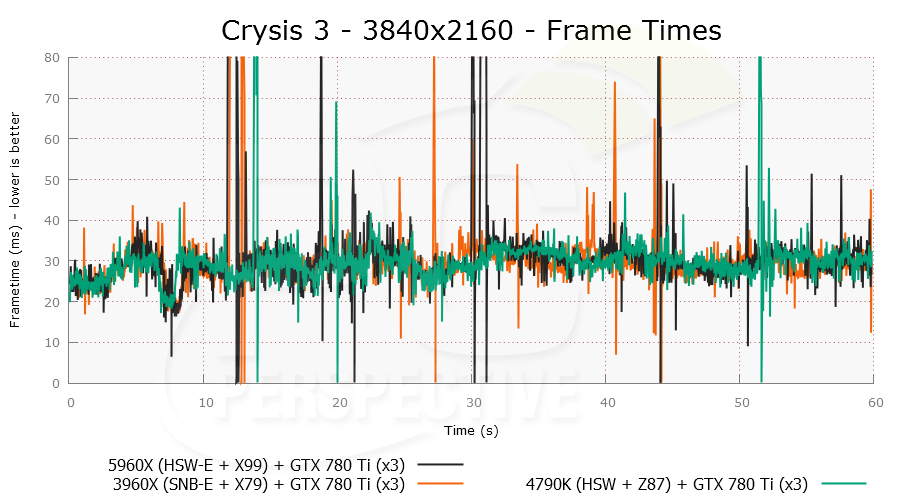 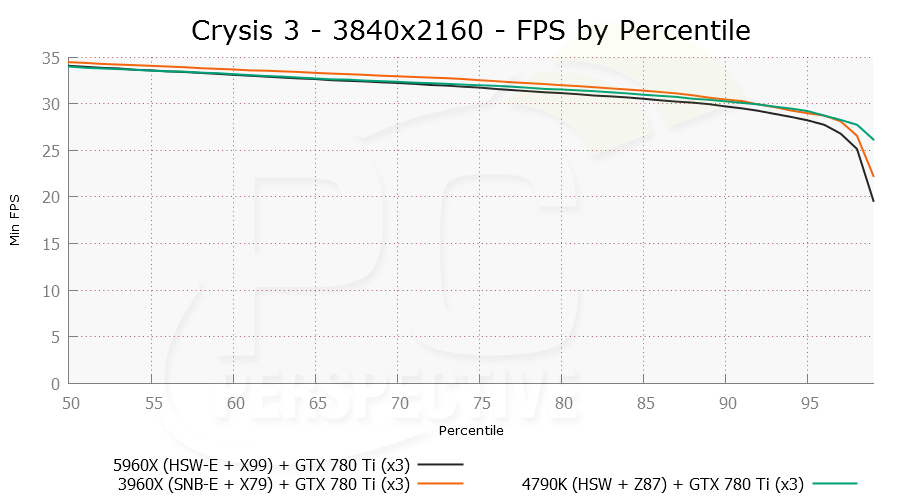 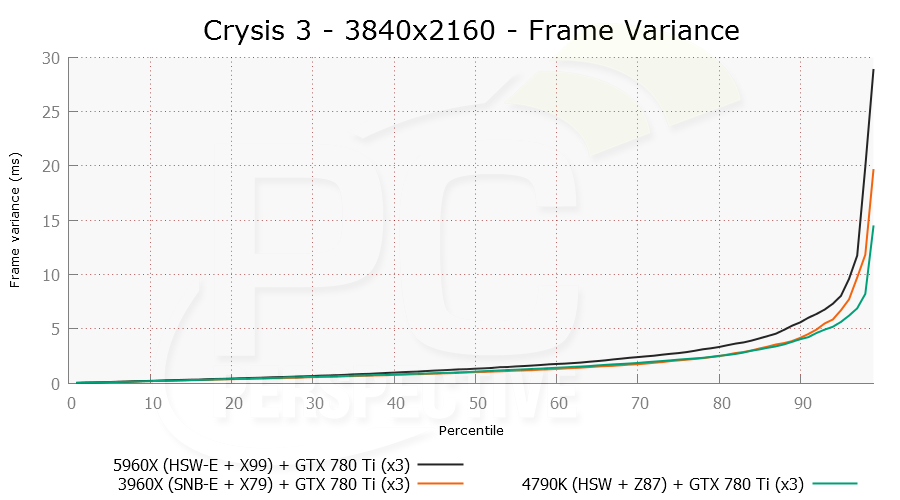 The Frame Time graph of Crysis 3 is quite different than BF4 – the frames are being delivered fairly consistently with low variance, indicating a better overall experience. Average frame rates hover at 34-35 FPS regardless of the processor used. Frame time variance is almost identical as well. 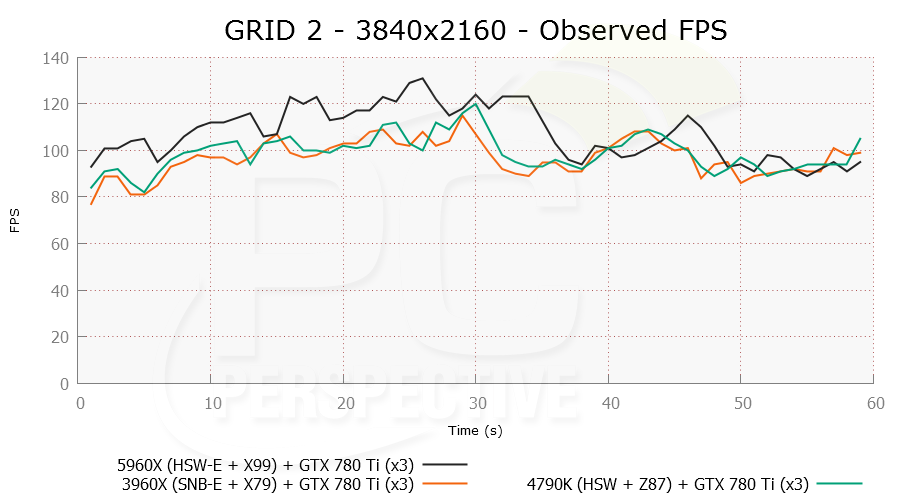 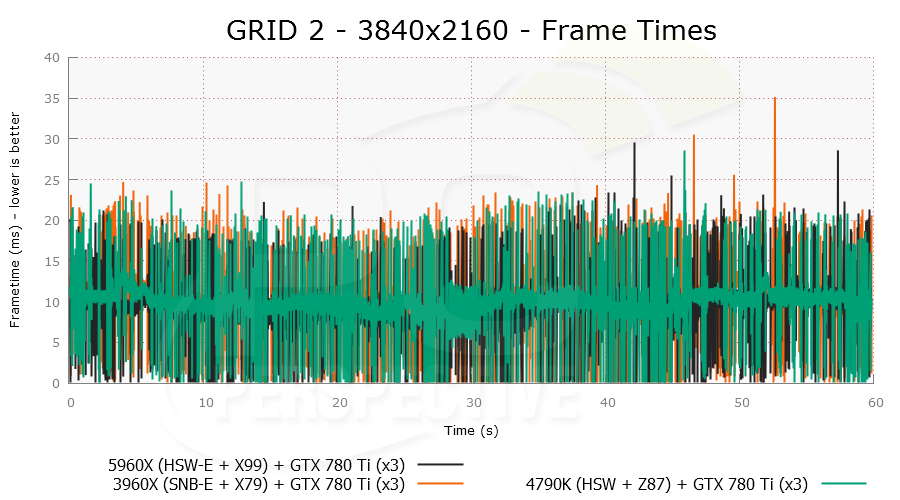 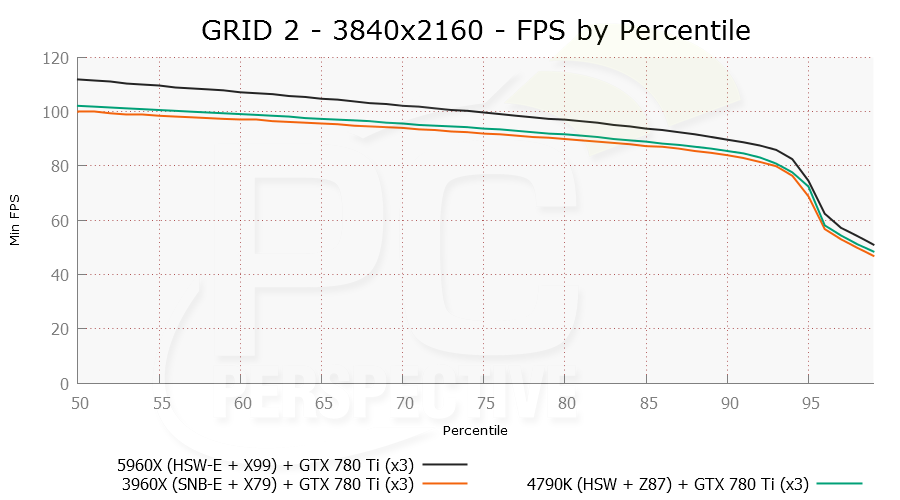 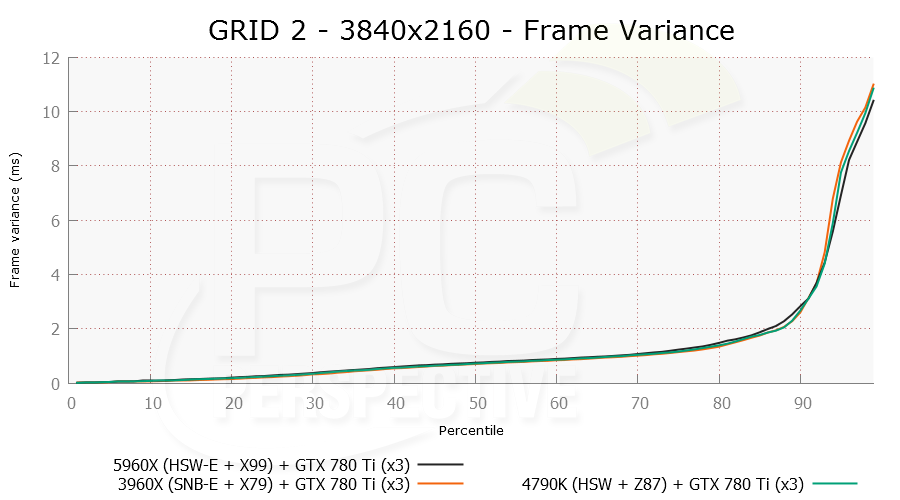 Here is our first indication that Haswell-E, in particular the Core i7-5960X, might have some advantage in multi-GPU gaming. The average frame rate of the 5960X based system is about 10% faster than the frame rate on either the 4790K or 3960X system. Even though there is more frame time variance than we want to see in our games, no single platform stands out from the others as being worse (or better really). 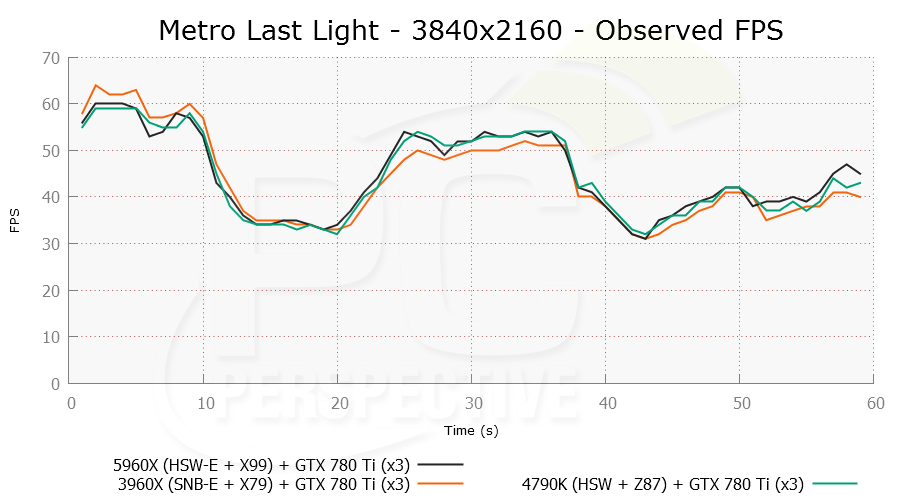 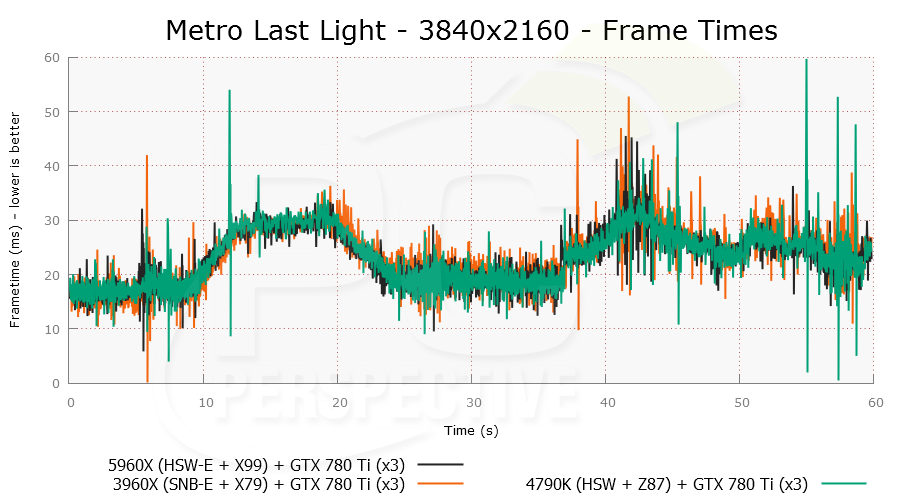 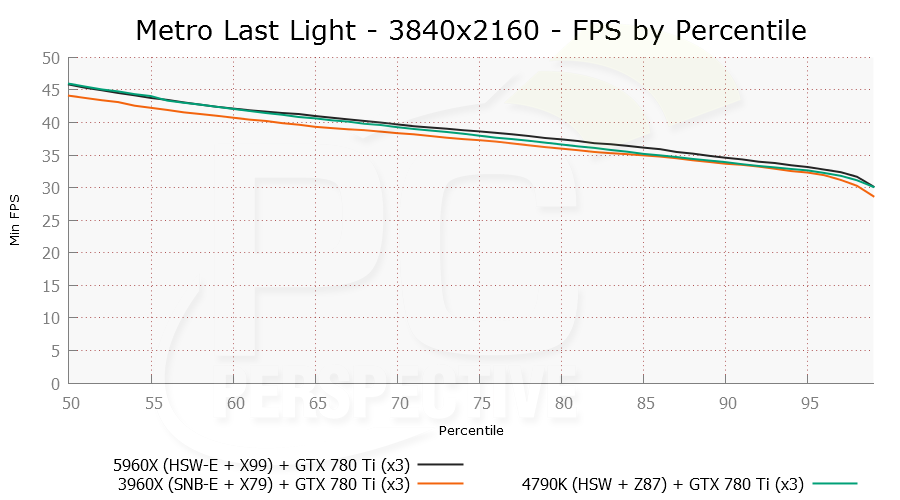 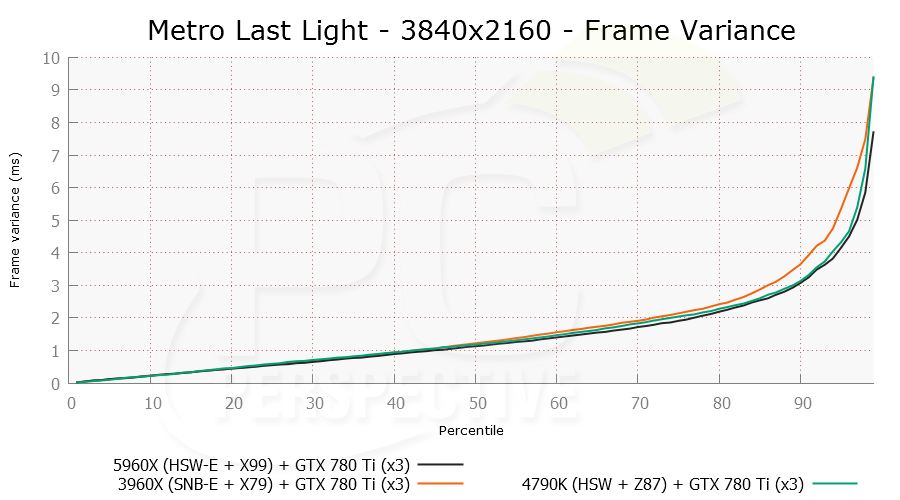 Metro: Last Light is another game that shows almost no differences between multi-GPU scaling performance on these three platforms.

What can you take away from this quick little look at multi-GPU scaling on Haswell-E? Well clearly we have more testing to do and we'd like to include AMD Radeon cards in the mix (if they can solve a dramatic bug we found in testing) to get a clearer picture. But, at least for this short glance, there are very little differences in either average frame rate performance or in frame time variance between the Core i7-5960X, Core i7-3960X and Core i7-4790K. To be honest, I was hoping and expecting something a bit different. 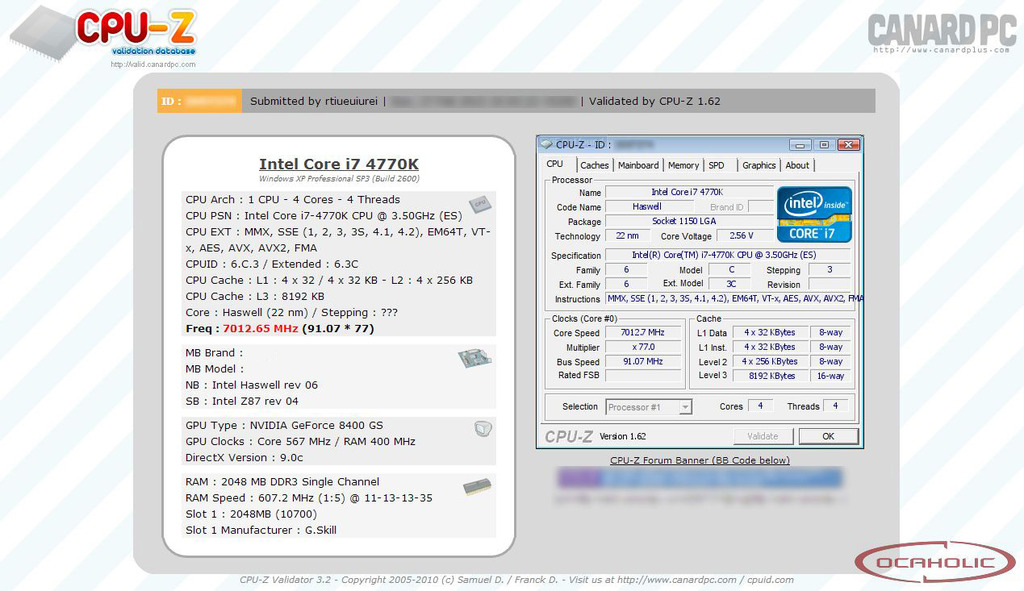