During GTC 2014 NVIDIA launched the Tegra K1, a new mobile SoC that contains a powerful Kepler-based GPU. Initial processors (and the resultant design wins such as the Acer Chromebook 13 and Xiaomi Mi Pad) utilized four ARM Cortex-A15 cores for the CPU side of things, but later this year NVIDIA is deploying a variant of the Tegra K1 SoC that switches out the four A15 cores for two custom (NVIDIA developed) Denver CPU cores.

Today at the Hot Chips conference, NVIDIA revealed most of the juicy details on those new custom cores announced in January which will be used in devices later this year. 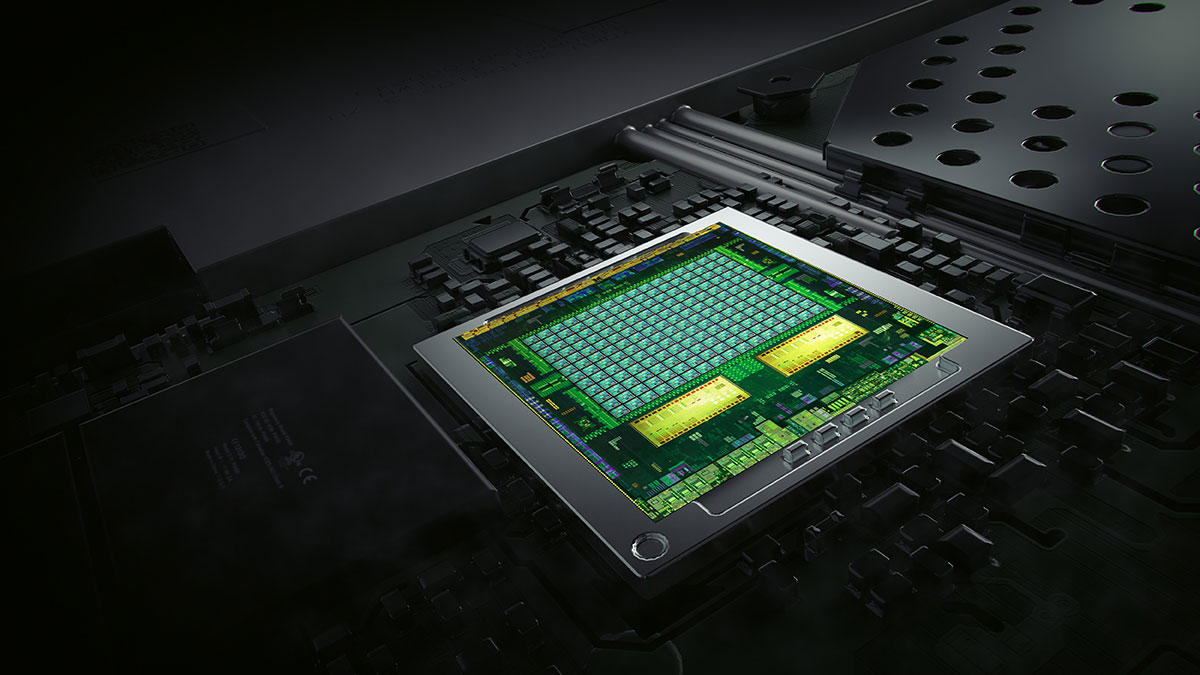 The custom 64-bit Denver CPU cores use a 7-way superscalar design and run a custom instruction set. Denver is a wide but in-order architecture that allows up to seven operations per clock cycle. NVIDIA is using a custom ISA and on-the-fly binary translation to convert ARMv8 instructions to microcode before execution. A software layer and 128MB cache enhance the Dynamic Code Optimization technology by allowing the processor to examine and optimize the ARM code, convert it to the custom instruction set, and further cache the converted microcode of frequently used applications in a cache (which can be bypassed for infrequently processed code). Using the wider execution engine and Dynamic Code Optimization (which is transparent to ARM developers and does not require updated applications), NVIDIA touts the dual Denver core Tegra K1 as being at least as powerful as the quad and octo-core packing competition.

Further, NVIDIA has claimed at at peak throughput (and in specific situations where application code and DCO can take full advantage of the 7-way execution engine) the Denver-based mobile SoC handily outpaces Intel’s Bay Trail, Apple’s A7 Cyclone, and Qualcomm’s Krait 400 CPU cores. In the results of a synthetic benchmark test provided to The Tech Report, the Denver cores were even challenging Intel’s Haswell-based Celeron 2955U processor. Keeping in mind that these are NVIDIA-provided numbers and likely the best results one can expect, Denver is still quite a bit more capable than existing cores. (Note that the Haswell chips would likely pull much farther ahead when presented with applications that cannot be easily executed in-order with limited instruction parallelism).

NVIDIA is ratcheting up mobile CPU performance with its Denver cores, but it is also aiming for an efficient chip and has implemented several power saving tweaks. Beyond the decision to go with an in-order execution engine (with DCO hopefully mostly making up for that), the beefy Denver cores reportedly feature low latency power state transitions (e.g. between active and idle states), power gating, dynamic voltage, and dynamic clock scaling. The company claims that “Denver's performance will rival some mainstream PC-class CPUs at significantly reduced power consumption.” In real terms this should mean that the two Denver cores in place of the quad core A15 design in the Tegra K1 should not result in significantly lower battery life. The two K1 variants are said to be pin compatible such that OEMs and developers can easily bring upgraded models to market with the faster Denver cores. 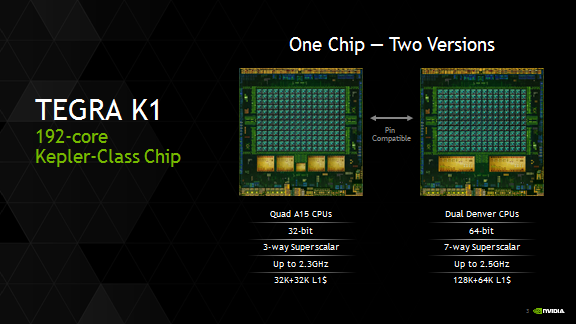 For those curious, In the Tegra K1, the two Denver cores (clocked at up to 2.5GHz) share a 16-way L2 cache and each have 128KB instruction and 64KB data L1 caches to themselves. The 128MB Dynamic Code Optimization cache is held in system memory.

Denver is the first (custom) 64-bit ARM processor for Android (with Apple’s A7 being the first 64-bit smartphone chip), and NVIDIA is working on supporting the next generation Android OS known as Android L.

The dual Denver core Tegra K1 is coming later this year and I am excited to see how it performs. The current K1 chip already has a powerful fully CUDA compliant Kepler-based GPU which has enabled awesome projects such as computer vision and even prototype self-driving cars. With the new Kepler GPU and Denver CPU pairing, I’m looking forward to seeing how NVIDIA’s latest chip is put to work and the kinds of devices it enables.

Are you excited for the new Tegra K1 SoC with NVIDIA’s first fully custom cores?