Here is where things get interesting.  Not only do we get to see exactly how much juice the FX-9590 is pulling from the wall, but we also get to see if the power savings from the 8370e are what we are hoping they will be.  Then we have Intel with their 77 watt i7 3770K. 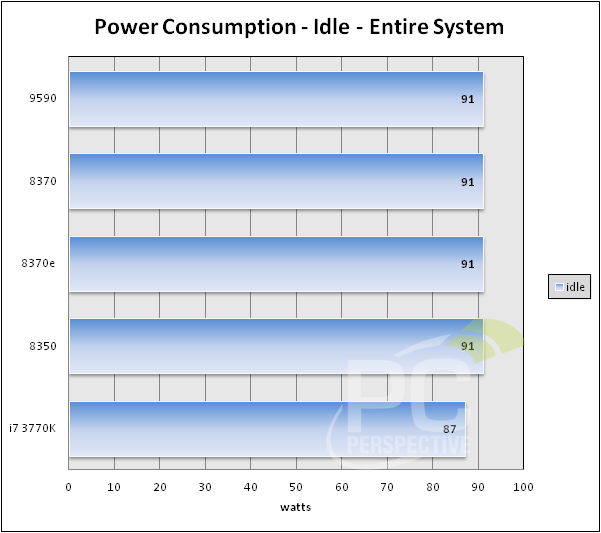 At idle all of the contestants are very close together.  The Intel machine is only 4 watts lower, but it also has a fancier motherboard.  It also does not have a fancy liquid cooling system.  I would imagine those things somewhat balance out. 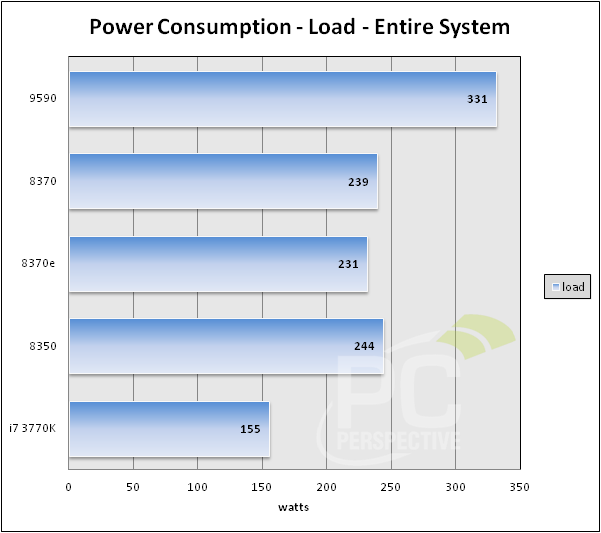 The FX-9590 is already essentially overclocked out of the box.  Running at 4.7 GHz base with a turbo speed up to 5 GHz, it is sitting at the bleeding edge of what AMD silicon can do without going into meltdown.  Hence the reason for the 220 watt TDP.  With the cooler blasting as hard as it could, I was able to hit 5.1 GHz on all cores with a 0.04v offset.  This is toasty territory.

The FX-8370 did not do as good as I was hoping.  This particular sample was able to hit 4.8 GHz with a 0.07v offset.  Temperatures were decent still, but it would become very unstable anywhere above that and temps would then skyrocket with more voltage.  This matches the highest overclock of my previous FX-8350 sample that I procured some years ago. 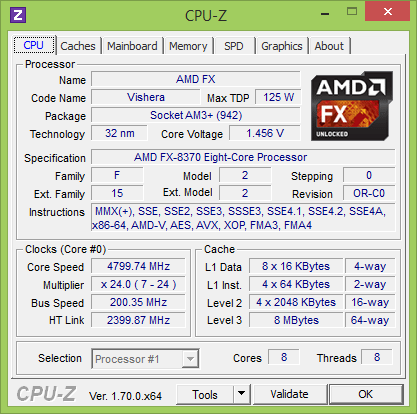 The FX-8370e is a little bit more interesting, but we are hitting the same wall as the regular 8370.  It is a lower voltage device that runs at a base clock of 3.3 GHz.  Taking the voltage up by about 0.03v and it quickly and easily hits 4.5 GHz.  It only hit 4.7 GHz with an extra 0.06v applied.  I believe that the binning process on these chips are not necessarily friendly to high overclocks, but rather more efficient performance with all four modules and reasonable clockspeeds.

I may have been able to achieve better results with a more robust motherboard than the MSI 970 Gaming.  The board proved very stable throughout testing, but I would not doubt that I could have achieved some extra speed with the Asus Crosshair V F-Z.  Still, that board will be a very popular option for those looking for max features at the lowest possible price for the AM3+ socket market.