As is usually the case with these launch articles, I don't get nearly the time that I would like to really go in-depth with overclocking. Still, even with limited time to do so, the results are kind of awesome. Kind of really awesome. 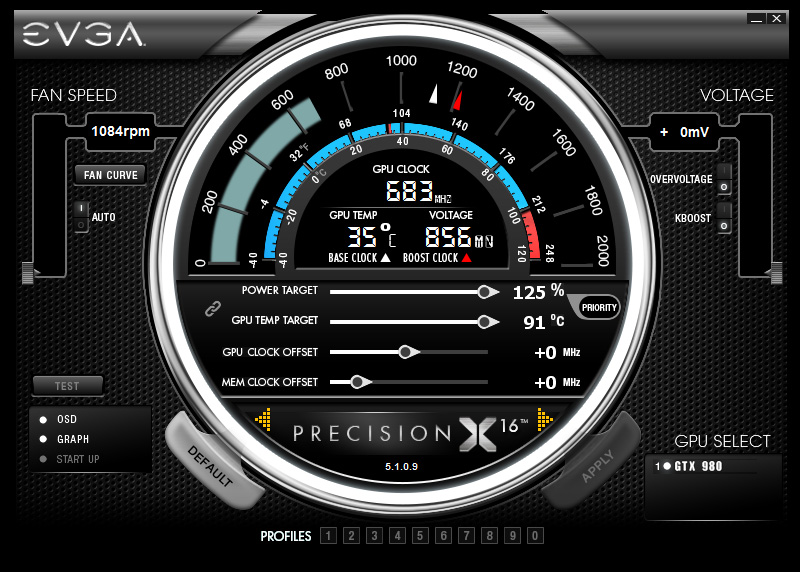 For my testing, I am looking only at the GeForce GTX 980 4GB reference cards NVIDIA sent over. We'll spend more time with the retail cards in the next week or two. I used EVGA's new PrecisionX software to handle all the knobs and dials of overclocking with GPU Boost.

Right away you can see that the power target is able to go up to 125%! Considering we were limited to 109% in most cases with the GTX 780 Ti, this is a big change, and it is the result of NVIDIA's efficient power design.

My GPU was 100% stable at a clock speed offset of 225 MHz, bringing our base clock speed to 1352 MHz and the Boost clock to 1441 MHz. Holy hell, let me wipe this sweat off my forehead. (Note: this also includes upping the voltage to the +0.87 mV maximum provided here.)

So what does that get us in performance? A quick run down in Metro: Last Light shows us. 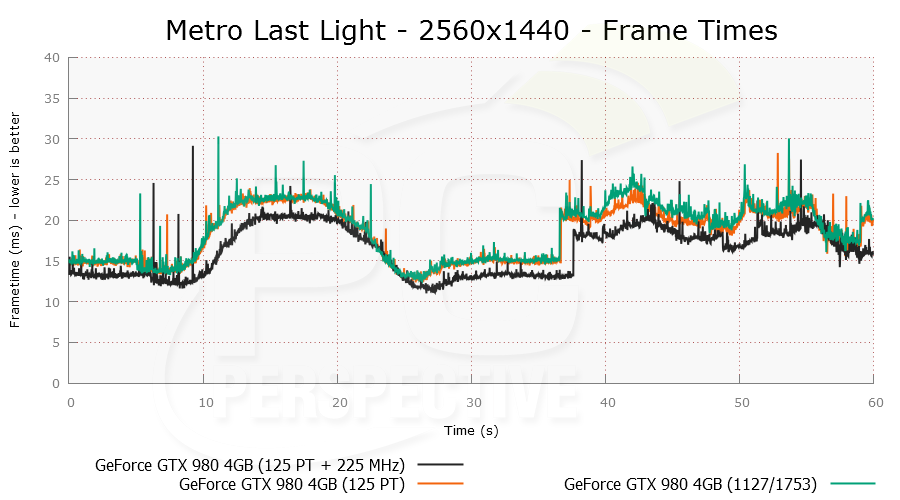 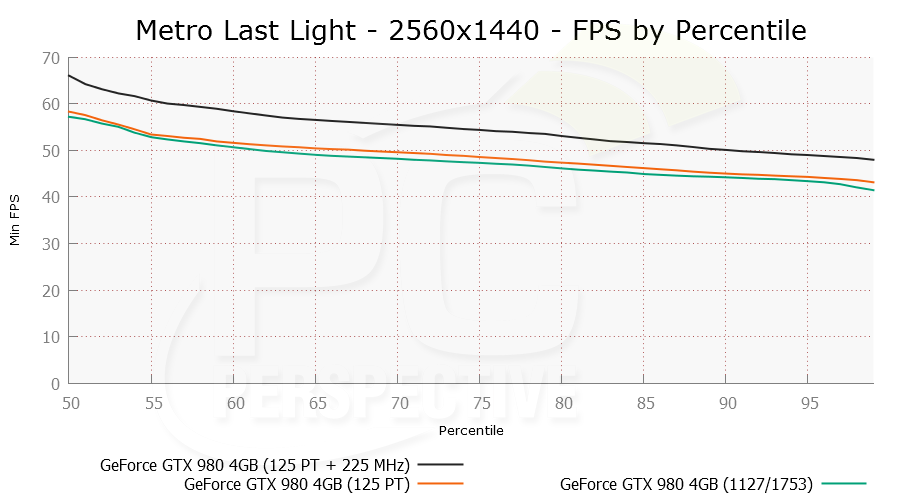 The black line represents our highest overclockable settings while remaining stable. The orange line, labeled with a 125 PT (power target) here, is here to show any gains from just increase the power target without changing a clock offset of any kind. 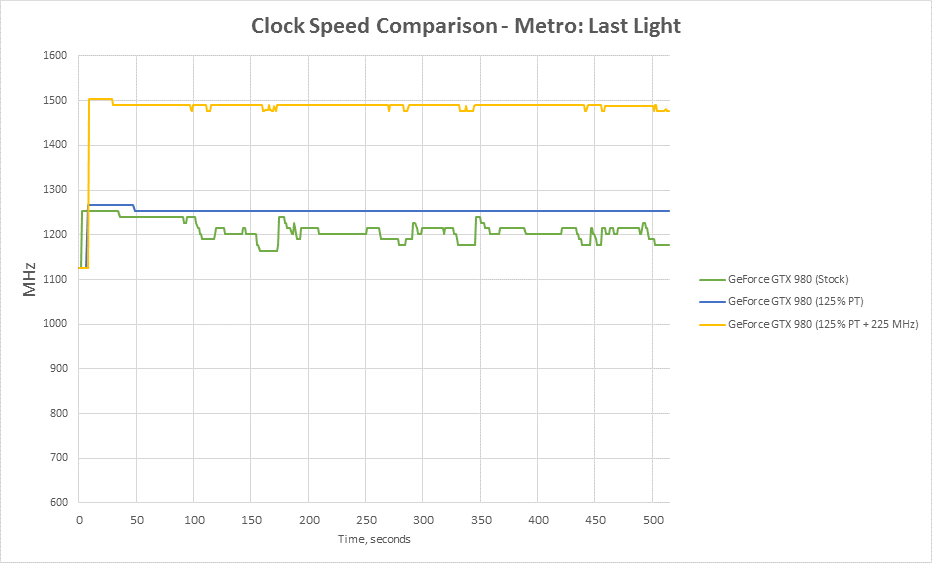 I know we are going to have questions about clock speed variance so I went ahead and addressed it with these few graphs. Here you are seeing the clock variance during our Metro: LL runs. The green line (all stock) shows there is some clock speed changes taking place, in line with what we expect GPU Boost to do, and how it has acted in the past. Nothing I have seen in my testing shows significant drops in clocks over time like we had with the initial wave of R9 290X/290 parts.

The blue line (with power target set to 125%) shows that we are hitting a TDP limit on the GPU and by simply increasing the available power to the card (through that slider) we get a very flat, static clock rate. Of course that means there is room to go up…

And that is what the yellow line shows us. Even overclocked to a 225 MHz offset, the GTX 980 is able to maintain a very consistent clock pattern. 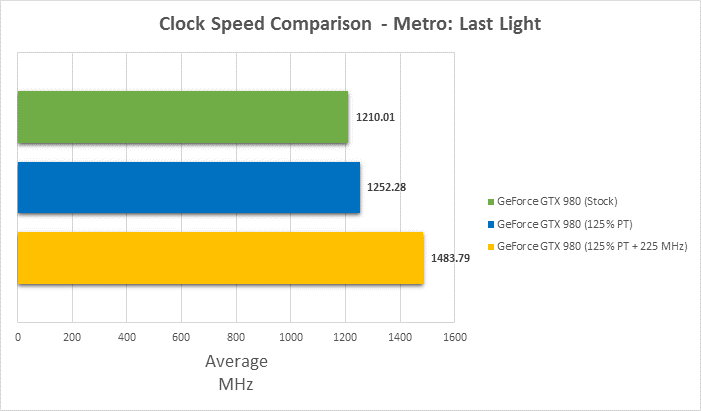 To see those numbers in a different way, here are the average clock speeds over those runs. The stock GTX 980 hits an average clock speed of 1210 MHz, right at the advertised Boost clock. The GTX 980 with only the power target adjustment gets a lift to 1252 MHz. But the really impressive mark here is the yellow bar, showing an average frame rate of 1483 MHz in our overclocked settings; that is 30% higher clocks. 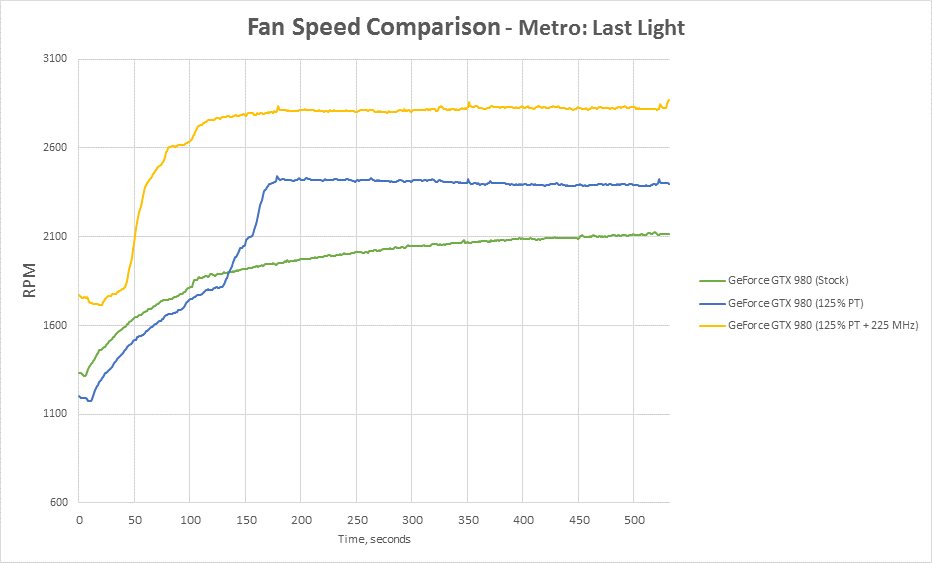 All of this does come at a small price of course – noise from the fan on the GTX 980. This graph shows the ramp up on fan speed and I can tell you from testing that the overclocked card was noticeably louder, hitting nearly 44 dbA using my sound tester. That's about on par with the sound level of the original R9 290X cooler, so not great. But you are overclocked SIGNIFICANTLY here and stock noise levels of the GTX 980 hit only 36.7 dbA. 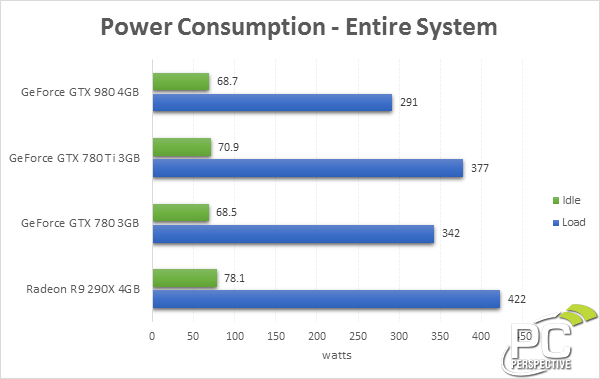 Let's take a look at power consumption, one of the key tenets of the Maxwell architecture. Right away you can tell that something odd is going on – I just showed you a dozen or more pages of the GTX 980 beating the GTX 780 Ti as well as the R9 290X by slim to moderate margins. Yet here I am showing you power consumption that is not just a little lower, but significantly lower than the competition. The GTX 980 draws 131 watts less than the R9 290X and 86 watts less than the GTX 780 Ti.

And, as expected, these results look even better for NVIDIA when we go into multiple cards. In fact, the GTX 980 SLI configuration uses about 30 watts LESS power than a single R9 290X going full bore. 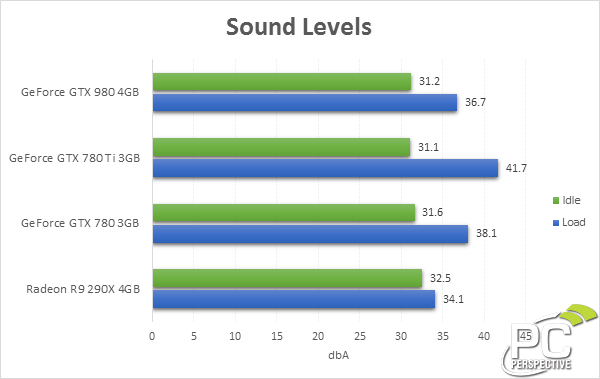 When I first tested the GTX 780 Ti, I knew it was a louder card that NVIDIA would like to make. Here you can see that the new GTX 980 with a reference cooler is able stay at a much lower noise level than the GTX 780 Ti. The Radeon R9 290X number we are showing here is NOT from an original reference card but instead an ASUS DirectCU II after market design, thus it shines incredibly well in our noise testing comparison.

The same is true for the GTX 970 – though we will dive more into with our retail card reviews soon!