We got our hands on the EVGA Hydro Copper water block for a couple of days and did some early performance testing.

While once a very popular way to cool your PC, the art of custom water loops tapered off in the early 2000s as the benefits of better cooling, and overclocking in general, met with diminished returns. In its place grew a host of companies offering closed loop system, individually sealed coolers for processors and even graphics cards that offered some of the benefits of standard water cooling (noise, performance) without the hassle of setting up a water cooling configuration manually.

A bit of a resurgence has occurred in the last year or two though where the art and styling provided by custom water loop cooling is starting to reassert itself into the PC enthusiast mindset. Some companies never left (EVGA being one of them), but it appears that many of the users are returning to it. Consider me part of that crowd. 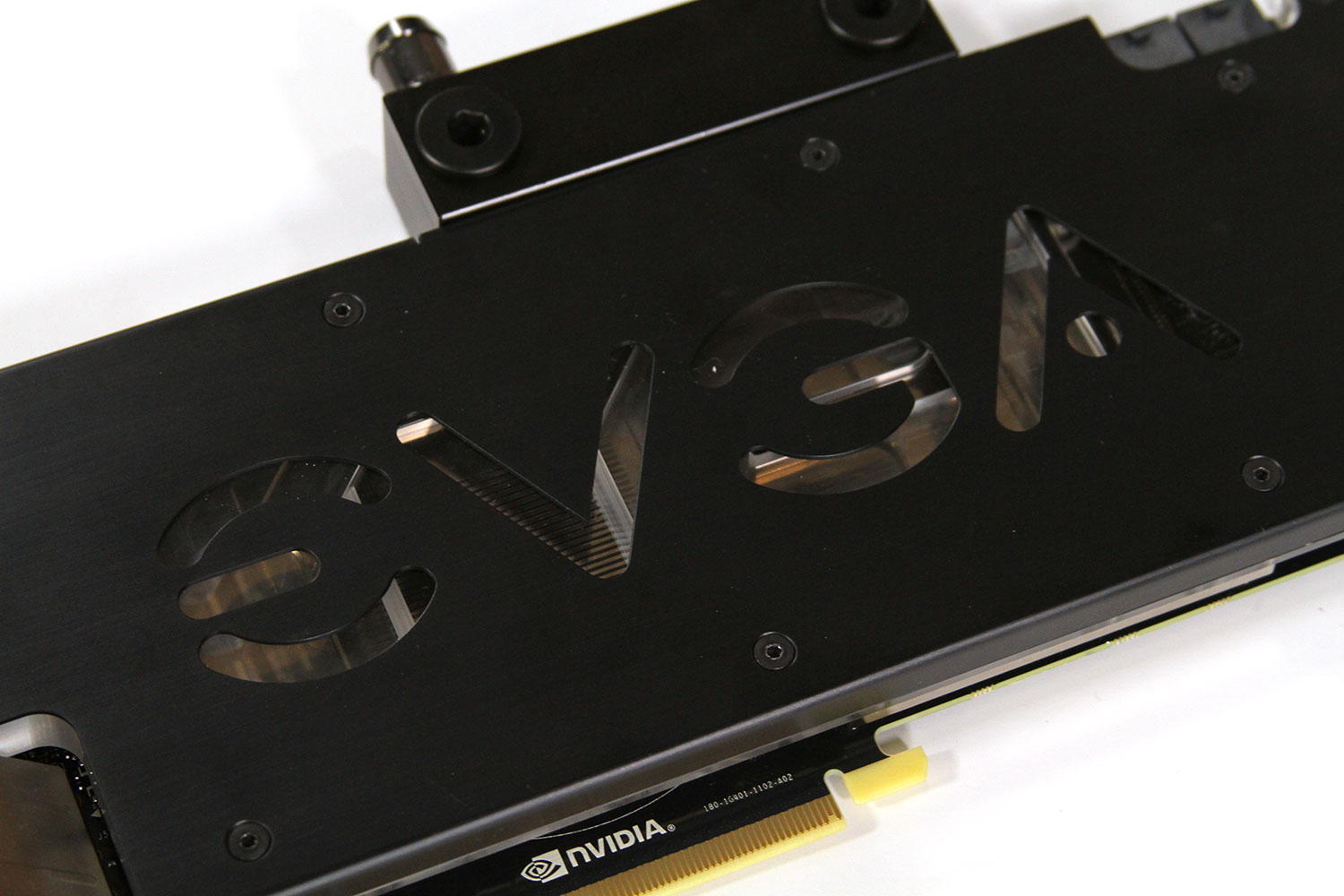 During a live stream we held with EVGA's Jacob Freeman, the very first prototype of the EVGA Hydro Copper was shown and discussed. Lucky for us, I was able to coerce Jacob into leaving the water block with me for a few days to do some of our testing and see just how much capability we could pull out of the GM204 GPU and a GeForce GTX 980.

Our performance preview today will look at the water block itself, installation, performance and temperature control. Keep in mind that this is a very early prototype, the first one to make its way to US shores. There will definitely be some changes and updates (in both the hardware and the software support for overclocking) before final release in mid to late October. Should you consider this ~$150 Hydro Copper water block for your GTX 980?

Earlier in the week we posted a video on our YouTube channel describing the water block installation process. This is pretty straight forward for users that have done any custom water cooling before, but can be intimidating for anyone just starting out in the field.

That video is where all the detail is at so be sure to view that if you want installation details. But let's go over the product at a high level here as well.

Based on the upcoming EK water block for the GTX 980, the EVGA Hydro Copper includes a white LED (not working in our test unit) as well as a slick looking EVGA shield to add some style to the design.

The underside of the unit is where the copper water block hides, with properly raised areas for contact with the GPU, memory and power delivery hardware. The block will of course ship with proper thermal pads to facilitate even contact with all secondary locations and includes thermal paste to apply to the GM204 itself. 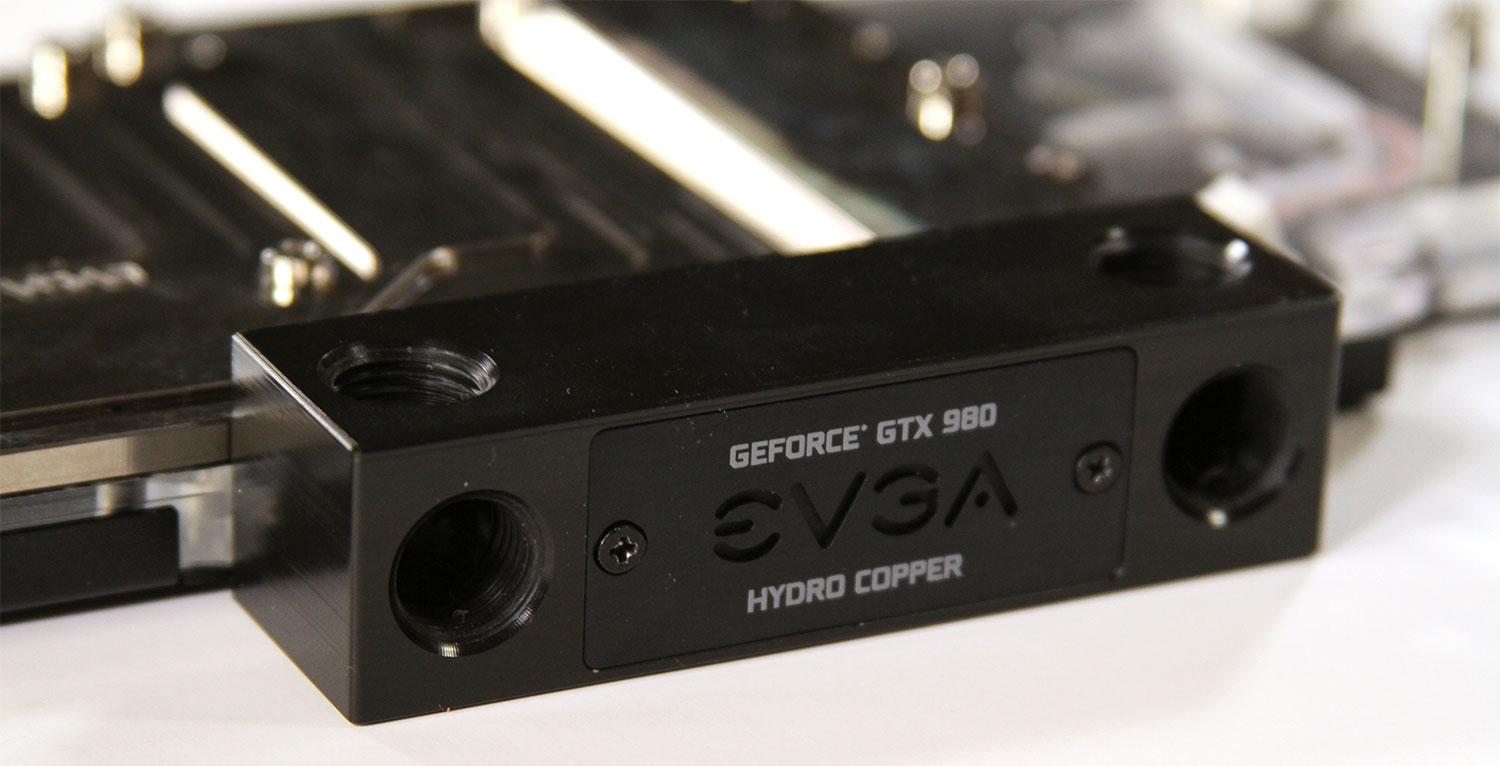 The inlet and outlet block is interesting in that it includes 6 total connection points, allowing a lot of flexibility for installation options. These are great to facilitate the best possible routing for single GPUs setups and make it a lot easier to get multi-GPU SLI rigs up and running too. EVGA includes 4 plugs to fill-in any unused ports. 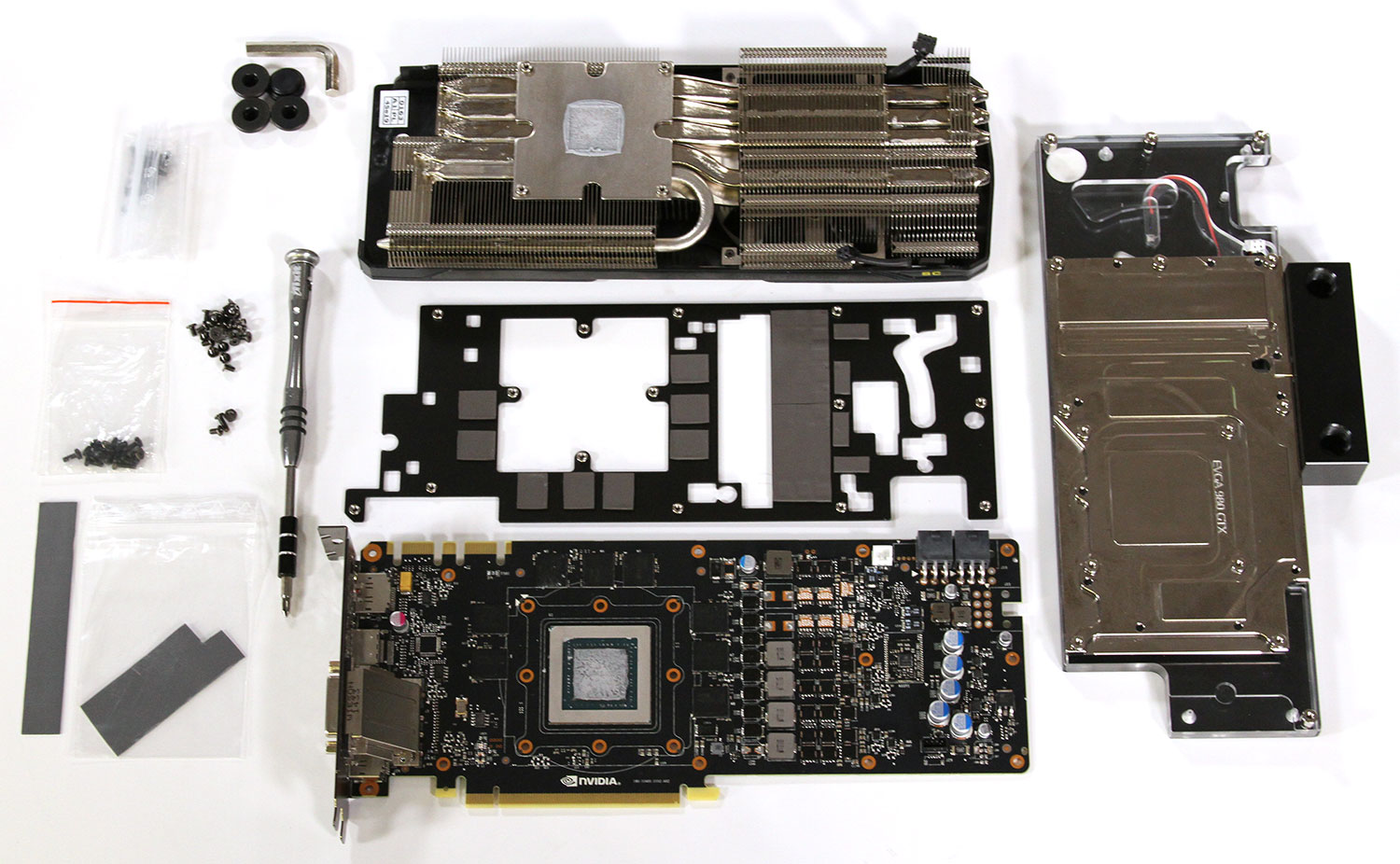 This photo shows the teardown of the EVGA GeForce GTX 980 ACX 2.0 SC card that we are currently testing for review including the ACX 2.0 cooler, the water block and all the screws and assembly parts. 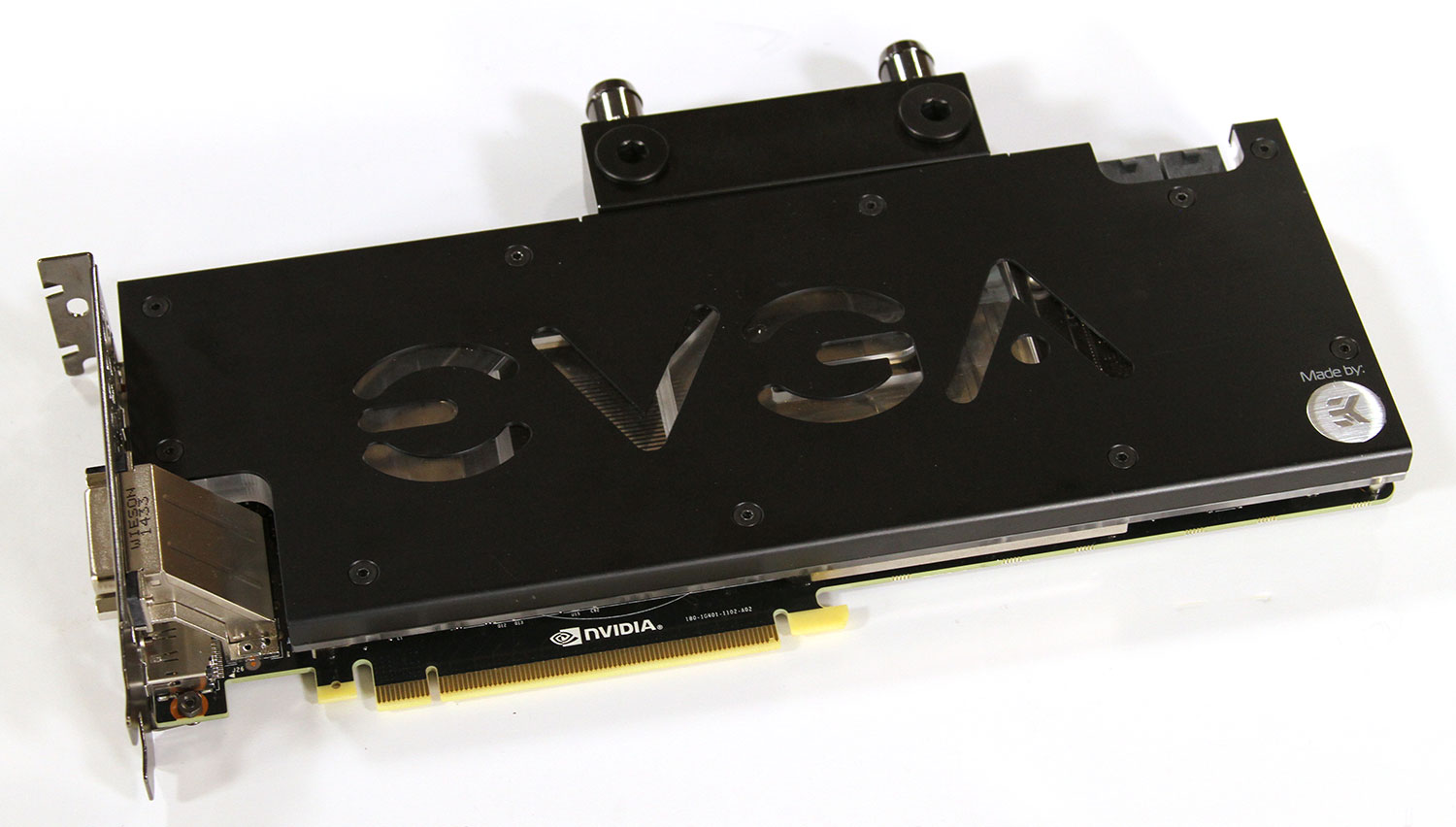 After proper installation with the Hydro Copper, the GTX 980 is a damn sexy piece of hardware! For our testing we installed a pair of barbs up top as it allowed for the easiest access for our testbed-style configuration.

Even though it has slimmed down quite a bit, you will still need two slots of space in your system for the card due to the dual-slot bracket with video display connections. 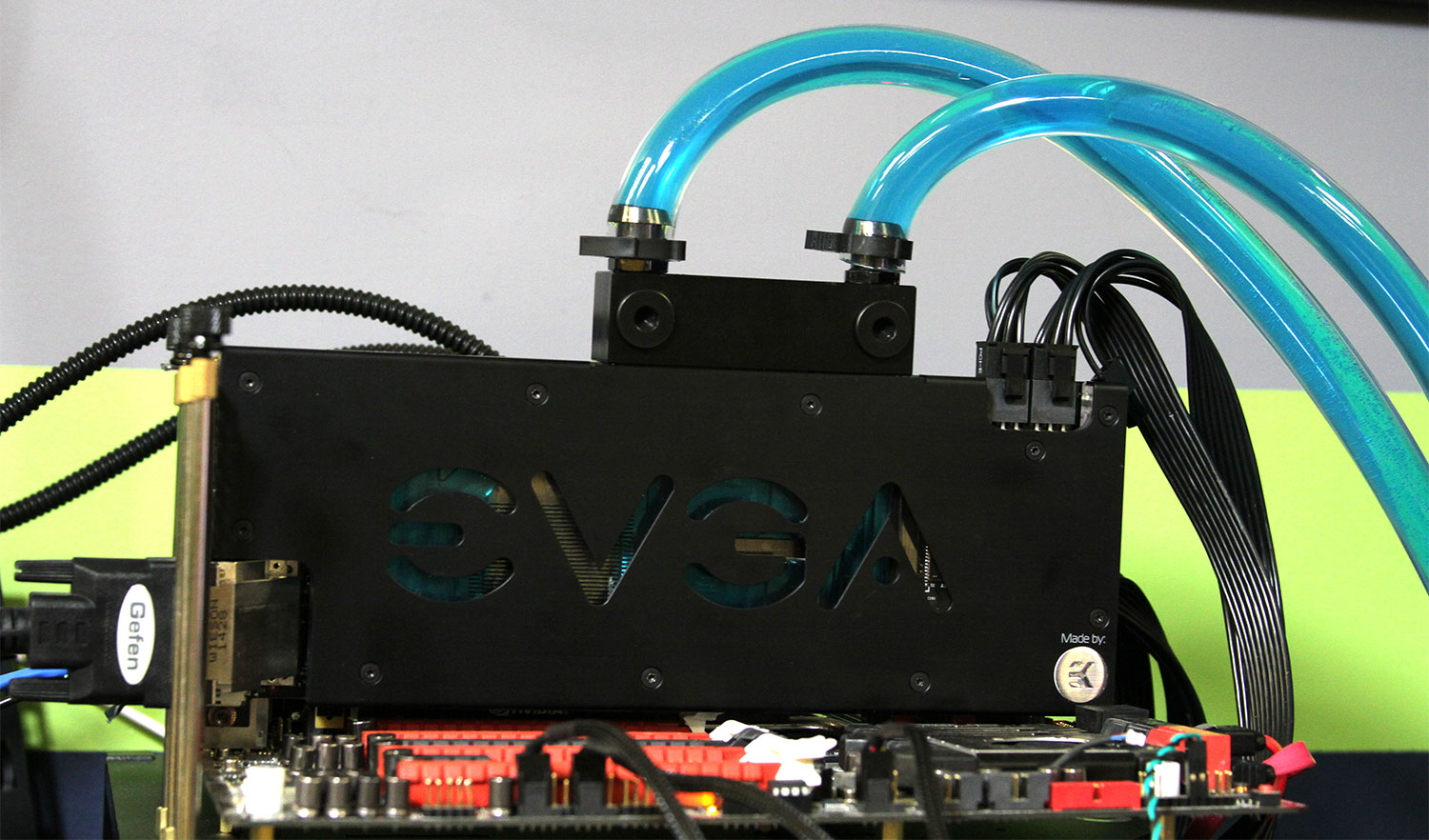 Here it is ready to go! Powered by a Koolance EXT-440 and an additional 360mm radiator, there is more than enough cooling power to give the GTX 980 the best possible chance for overclocking.