If everything holds up in practice as it appears on paper, the Y50 Touch should be a respectable performer. With 8 GB of RAM and a powerful CPU we’ve covered many times in the past (the Intel Core i7-4700HQ), not to mention a very capable NVIDIA GeForce GTX 860M (2 GB GDDR5), the only thing really holding it back is likely the storage device (in our case, a 1 TB SSHD—which is more or less a conventional hard drive with glorified SSD caching). Again, it’s possible to boost the RAM to 16 GB preinstalled alongside a GTX 860M with double the VRAM—4 GB vs. 2 GB—for just an extra $90. Truly, it’s a reasonable asking price for the upgrade; but today, we’ll be testing the 8 GB RAM/2 GB VRAM model we received.

Before we dive into this, let’s have a look at the stress testing results from our time with FurMark. Under heavy CPU stress, we observed all four cores at a stable 2.4 GHz, which is the base clock speed for the i7-4710HQ. Hypothetically under ideal thermal/TDP scenarios this CPU can reach 3.2 GHz for four active cores—but that doesn’t appear to be possible in the Y50 Touch. It’s possible that heat is the limiting factor; the highest recorded temperature we found here was 83°C, which isn’t worrisome by any means. Nevertheless, this still doesn’t qualify as throttling since the base CPU frequency is maintained at all times—just a failure to achieve full Turbo Boost potential (or really, any Turbo Boost potential).

What about GPU? With GPU stress only, we saw stable clock rates with no throttling and maximum temperatures of just 69°C. Meanwhile, the CPU slid back to 800 MHz to conserve power while it wasn’t in use. What if it was in use, you ask? With both GPU and CPU stress applied, we still saw the same stable clock rates for both CPU and GPU, though yet again (naturally) no CPU Turbo Boost was observed. 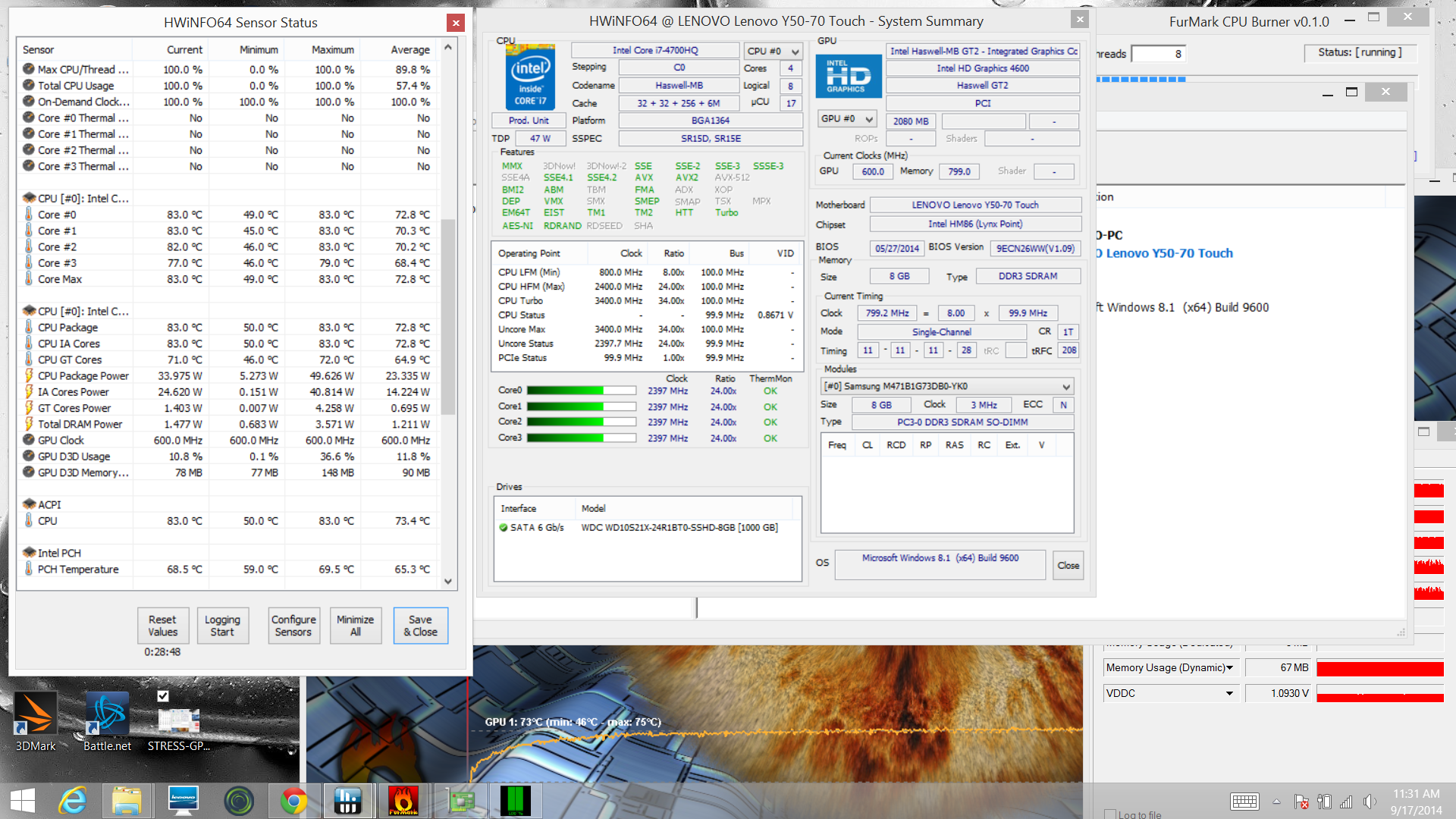 The bottom line is that the Y50 Touch experiences no throttling under even the heaviest of loads applied; however, it also offers little to no benefit in the realm of CPU Turbo Boost potential.

The Intel Core i7-4700HQ is one of the most popular quad-core Haswell models on the market, though—again—the Y50 Touch on Lenovo’s site has already stepped up slightly to an i7-4710HQ (which gains another 100 MHz clock speed). The differences between the two CPUs stop there, however, and the effects on performance are likely negligible at best. The i7-4700HQ we’ll be testing features a base clock rate of 2.4 GHz and a max Turbo Boost frequency of 3.4 GHz. We’ve got plenty of previous results to which we can compare—so let’s see how the Y50 Touch measures up to the field. 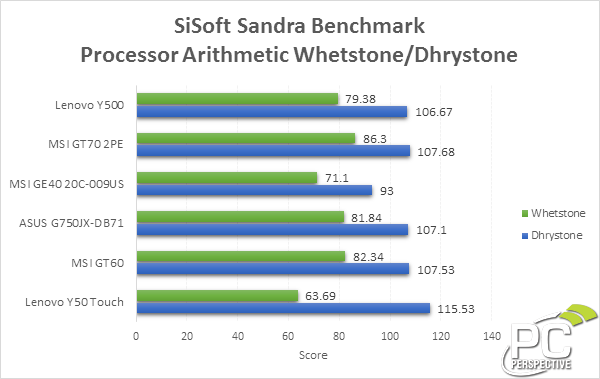 Dhrystone performance here is the best we’ve recorded, which is interesting—as Whetstone is just the opposite. It’s even more interesting when you consider that the CPU is functionally inferior (or at worst equivalent) to that of most other gaming notebooks we’ve reviewed recently, and yet it somehow managed quite different results. 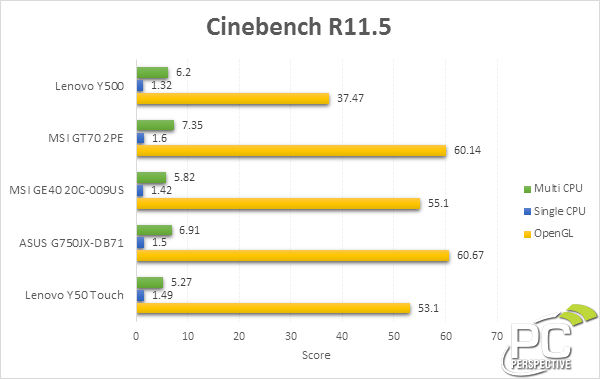 Cinebench provides saner results, with a single-CPU value right where we’d expect it to be. However, the multi-CPU result is lower than the G750JX by a full 24% (5.27 vs. 6.91), and both laptops are packing the same process. Ditto the GT70, whose CPU (i7-4800MQ) is only slightly better than the Y50’s—and yet it manages a 7.35. Could this suggest some degree of throttling is present on the Y50?

We’ll see how much these findings factor into actual system performance next, as well as whether our graphical benchmark results are at all affected by any idiosyncratic thermal or power limitations of the model.

First up, however, we’ll expect to witness the drag of a conventional mechanical hard drive (versus many of its competitors’ solid-state solutions) via a ceremonial run of PC Mark 7. 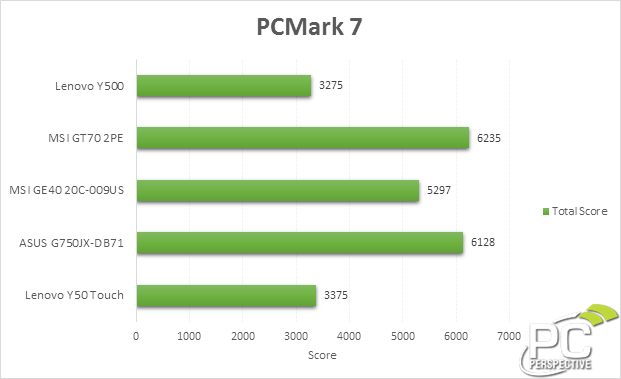 Did we call that or what? Naturally, the Y50’s 5400 RPM hard drive—a Western Digital WD10S21X SSHD—can’t hold a candle to a solid-state drive. That’s in spite of its inclusion of 8 GB of flash memory to assist with active caching (an approach which certainly helps, but not to the extent which a fully solid-state solution would of course). It’s nearly single-handedly responsible for a much lower score of 3375 in PC Mark 7 as compared to its gaming brethren, which routinely post values above the 5000 (and even 6000) mark.

Let’s have a closer look at this drive specifically and how it compares to others. 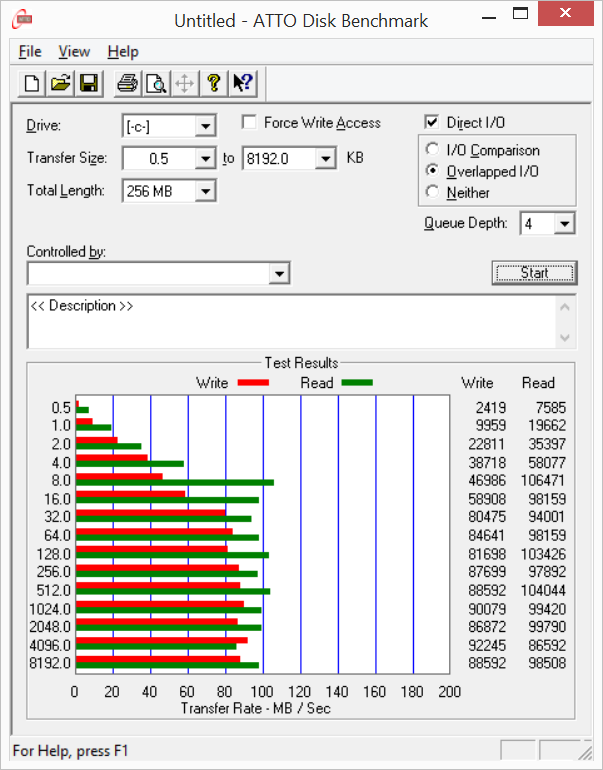 The Y50 Touch’s drive is unfortunately the slowest of the bunch. This is nothing even close to modern solid-state performance, and it’s well below that of even many other 5400 RPM drives. There is no doubt that this is reason behind the lower-than-hoped application performance measurements. 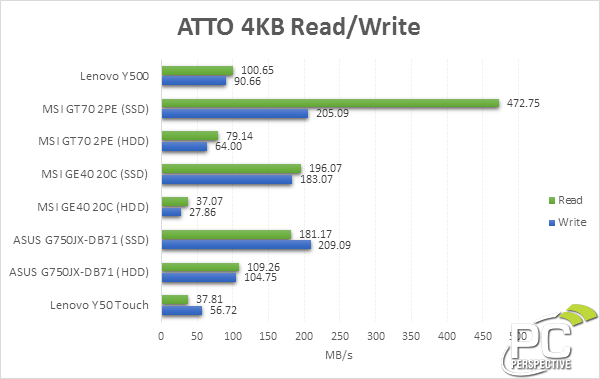 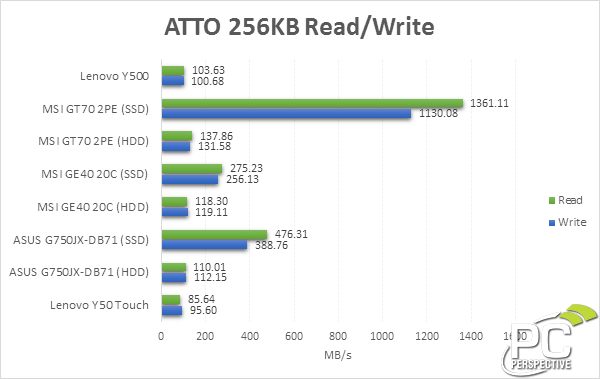 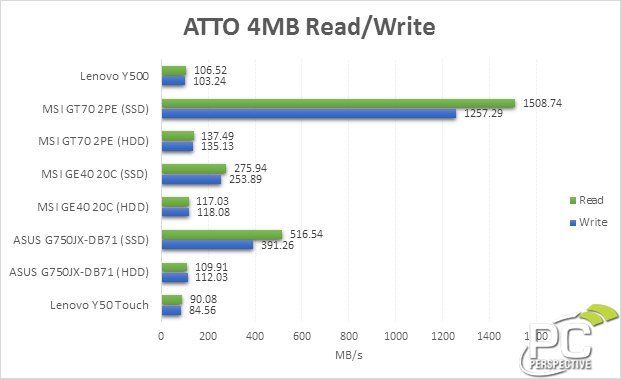 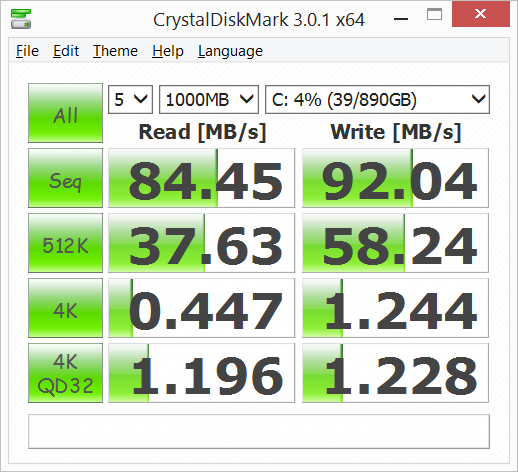 CrystalDiskMark 3.0 reaffirms the existence of such mediocre speeds. Under the circumstances, the very first upgrade most users should make to their Y50 would be the replacement of this drive with an SSD. 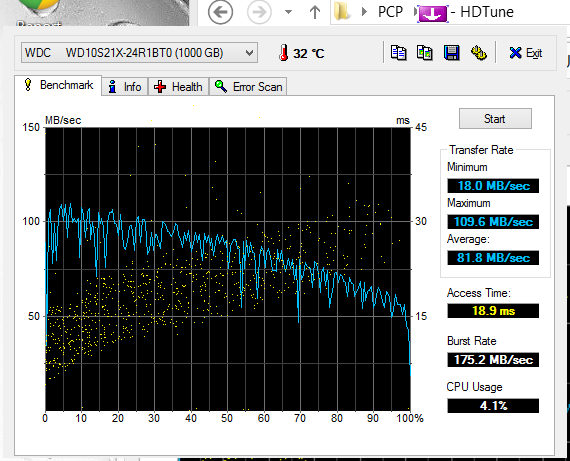 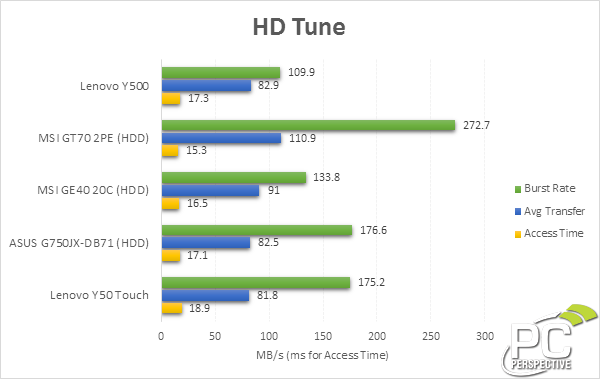 All told, this is perhaps the one area in which the Y50 seriously lacks in comparison to the larger Y500. Even though the Y500 we reviewed also featured a mechanical drive, it was a much faster Seagate model that was a good 15–20% quicker in every measurement.