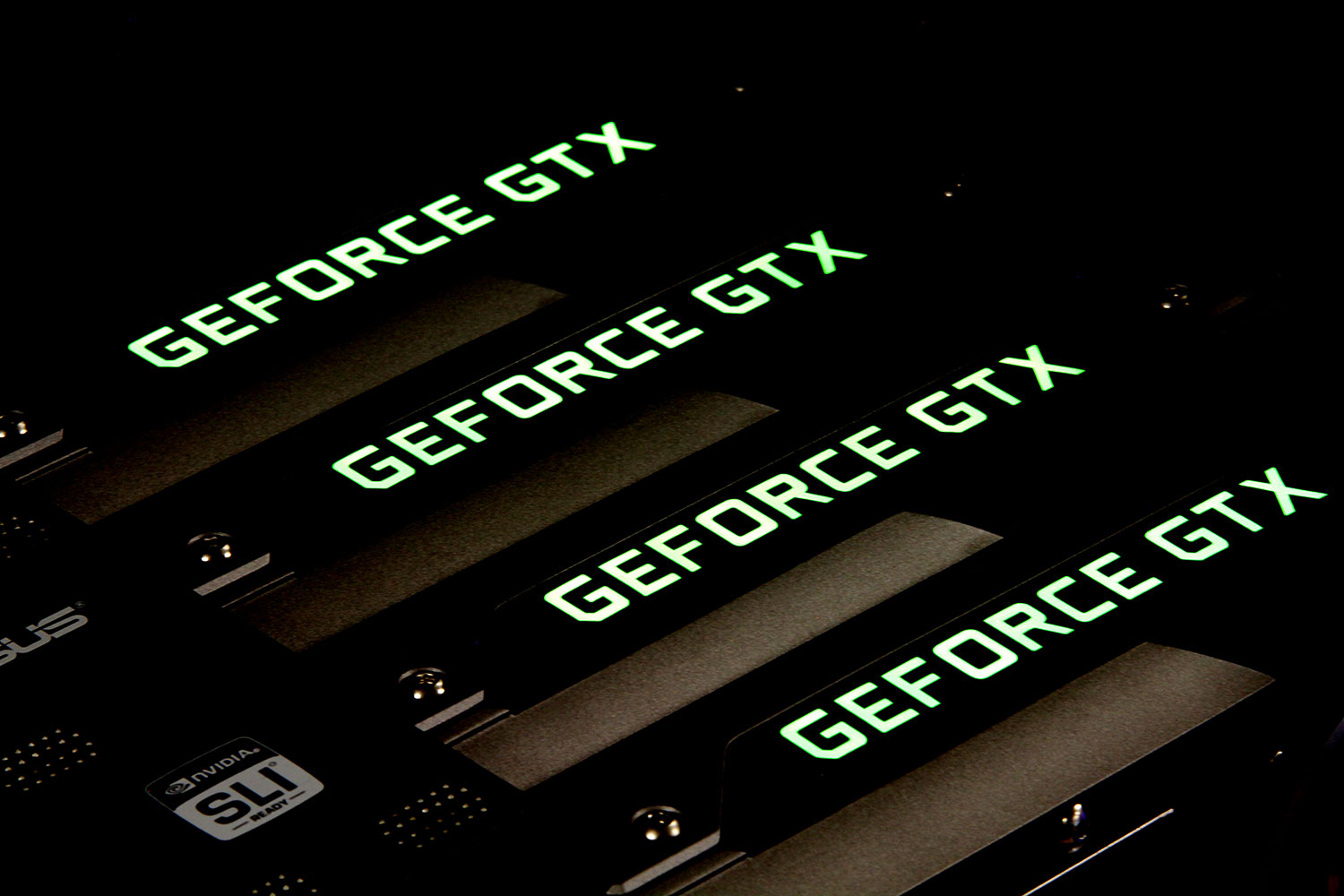 We got our hands on a set of GTX 980 reference cards to run through paces in 3-Way and 4-Way SLI.

The idea of multi-GPU gaming is pretty simple on the surface. By adding another GPU into your gaming PC, the game and the driver are able to divide the workload of the game engine and send half of the work to one GPU and half to another, then combining that work on to your screen in the form of successive frames. This should make the average frame rate much higher, improve smoothness and just basically make the gaming experience better. However, implementation of multi-GPU technologies like NVIDIA SLI and AMD CrossFire are much more difficult than the simply explanation above. We have traveled many steps in this journey and while things have improved in several key areas, there is still plenty of work to be done in others.

As it turns out, support for GPUs beyond two seems to be one of those areas ready for improvement. 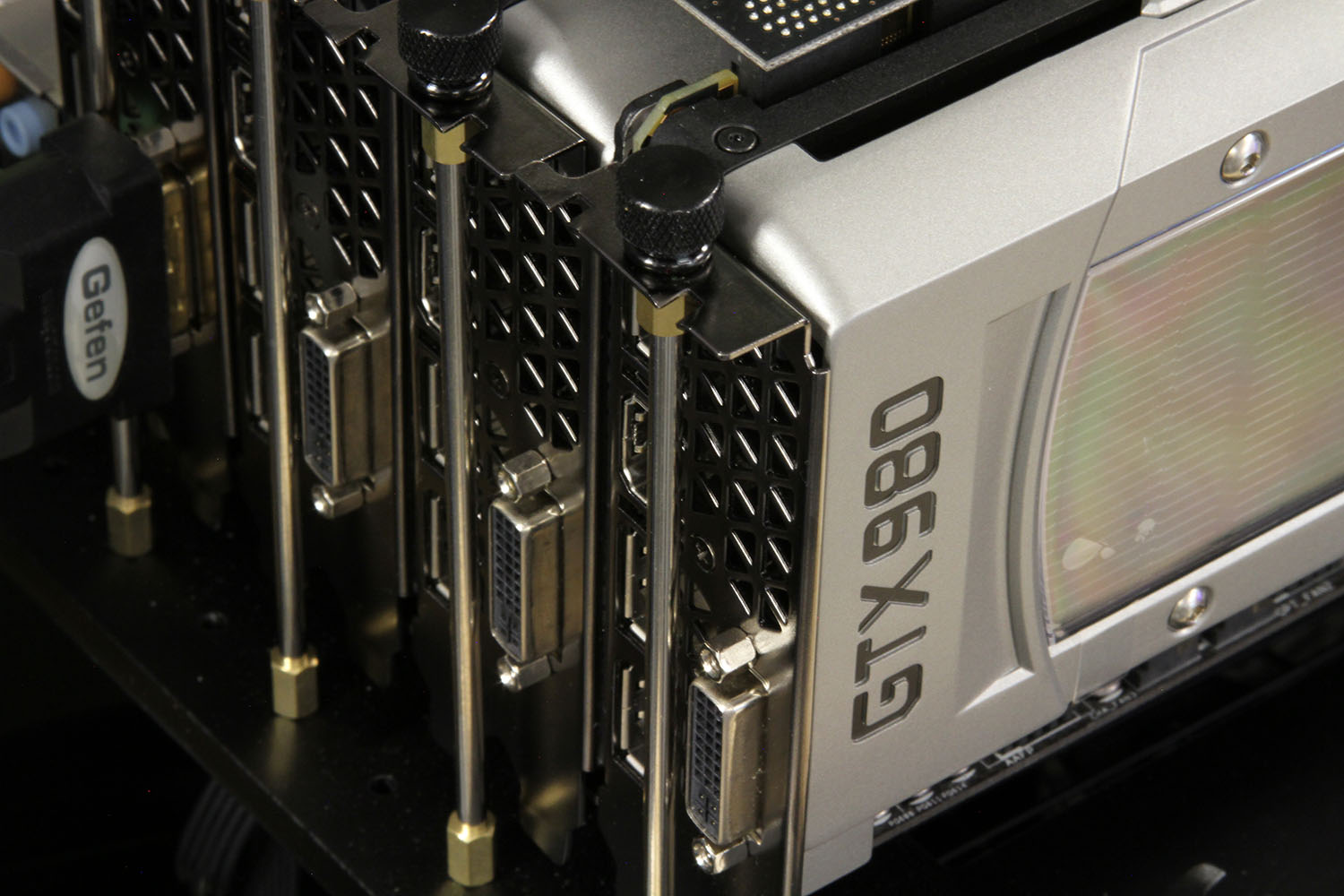 When the new NVIDIA GeForce GTX 980 launched last month my initial review of the product included performance results for GTX 980 cards running in a 2-Way SLI configuration, by far the most common derivative. As it happens though, another set of reference GeForce GTX 980 cards found there way to our office and of course we needed to explore the world of 3-Way and 4-Way SLI support and performance on the new Maxwell GPU.

The dirty secret for 3-Way and 4-Way SLI (and CrossFire for that matter) is that it just doesn't work as well or as smoothly as 2-Way configurations. Much more work is put into standard SLI setups as those are by far the most common and it doesn't help that optimizing for 3-4 GPUs is more complex. Some games will scale well, others will scale poorly; hell some even scale the other direction.

Let's see what the current state of high GPU count SLI is with the GeForce GTX 980 and whether or not you should consider purchasing more than one of these new flagship parts.

Running more than two graphics cards in your system requires a bit more planning than just running SLI. First, if you are targeting 4-Way configurations, and have the standard dual-slot graphics cards, you are going to be limited to a handful of motherboard and platforms that support it. There are Z97 motherboard available today that can run 4-Way SLI but they integrated a third-part PCI Express bridge chip to turn the x16 lanes of PCIe provided by Haswell and allow it to feed four different graphics cards at x8 bandwidth. Kind of like black magic. 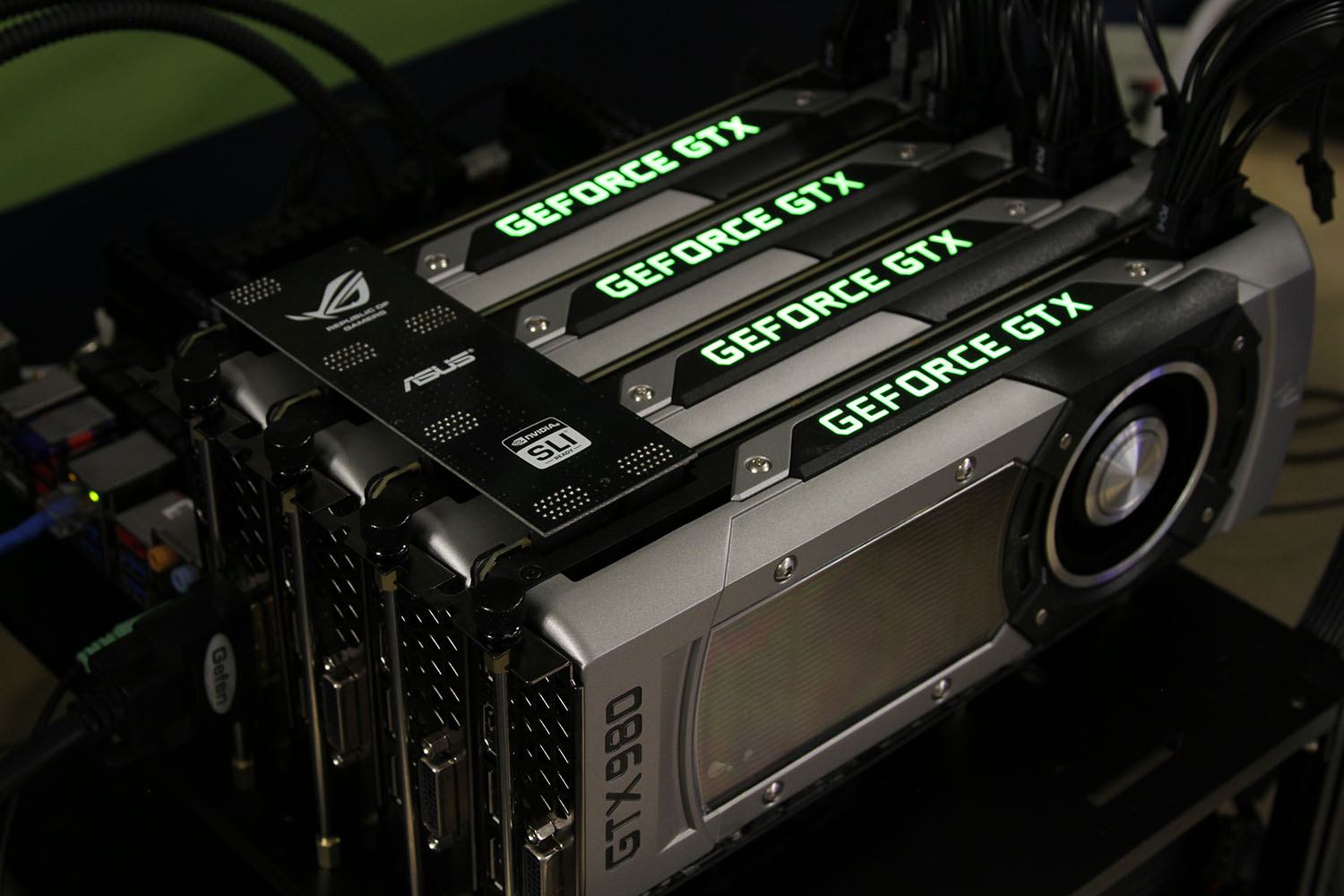 By far the more popular platform for 3-Way and 4-Way GPU users is the Intel E-series of processors. Sandy Bridge-E, Ivy Bridge-E and now Haswell-E. These use the X79 or X99 (HSW-E) chipset and supply much more PCIe bandwidth from the processor, allowing native support for x8 PCI Express 3.0 in most cases. Our testing setup uses an Intel Core i7-3960X along with an ASUS X79 motherboard to support 4-Way SLI, both electrically and physically.

From a software point of view, setting up SLI is really easy, even for lots of GPUs. Once you plug in all the cards are you going to run, and then install the right driver (344.16 in our case), enabling SLI is as simple as selecting a radio button. 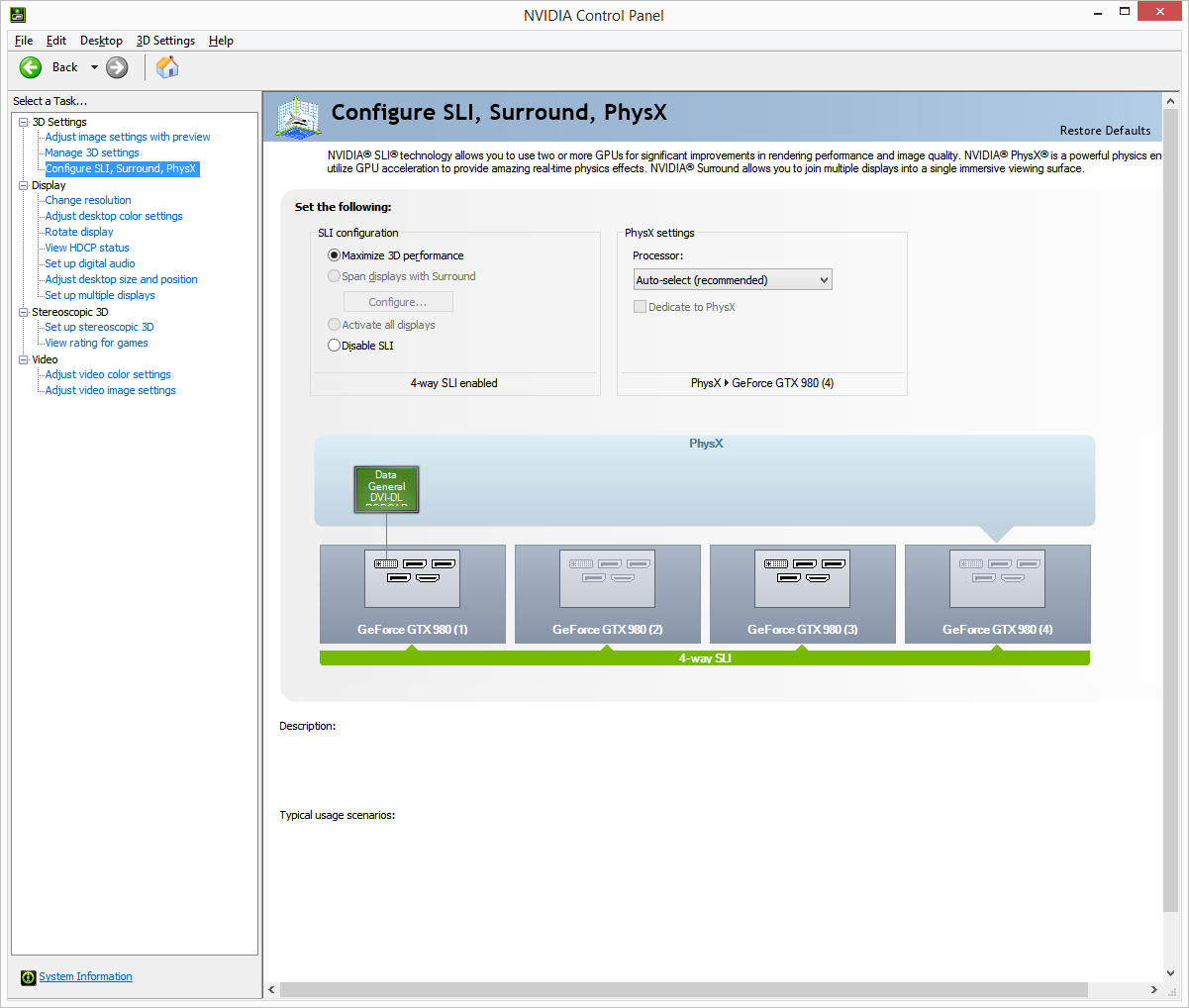 As long as you have the right SLI bridge connecting all of your cards (supplied with your SLI-ready motherboard) you are ready to go.

If you have been following the graphics card and GPU reviews at PC Perspective for any length of time, you likely realize that we do our reviews quite differently. Rather than relying exclusively on something like FRAPs and an average or average + minimum frame rate, our testing process is quite a bit more complex. We capture the actual game footage coming out of the system and run some post-processing on the recording to measure frame rates as well as frame times. This allows us to measure real-world gaming experiences as well as show smoothness and frame time consistency in a far superior way as compared to other software based solutions.

Rather than paste in our entire process here, instead I will link you to our initial GeForce GTX 980 article and it's page that details the PC Perspective Frame Rating process. Give it a read if you are new to the site; it will make the coming pages make a lot more sense.

Our test system remains the same for this 3-Way and 4-Way SLI testing and because of the power efficiency of the GM204 GPU, we didn't have to worry about upgrading our 1200 watt power supply to a 1500 watt unit. In fact, as you'll see on the last page, we barely were able to hit over 800 watts in testing!

Some Thoughts On Scaling Measurement

An astute commenter on this story helped me realize that I had not explained the scaling measurements of the multiple GPUs and how the "optimal" scaling rates would look. In the following pages you'll see discussion of our performance results that mention specific scaling percentages. What is important to realize is that as you add GPUs to your system, the maximum (or optimal) scaling rate changes. For example, going from 1 card to 2 cards, your theoretical maximum performance scaling is 100%. When you go from 2 to the 3 cards though, that maximum is 50%. 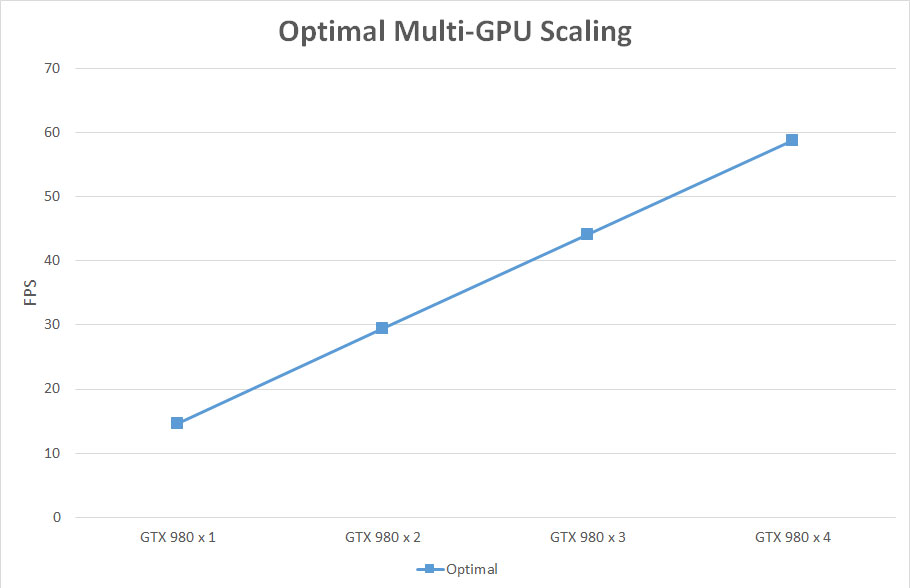 Here is an example of how scaling would work in 4-Way SLI if everything worked perfectly. You are seeing performance of 14.7 FPS (Crysis 3 at 4K) with a single card, 29.4 FPS for two cards, etc. 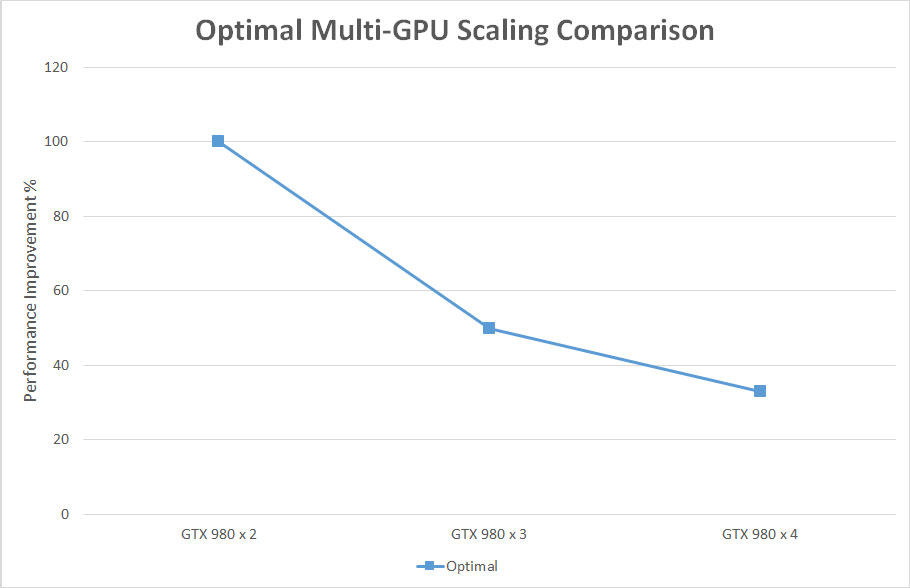 On the following pages, when you see a scaling rate of 20% at the 4-Way SLI level, then you know that is actually decent scaling considering the maximum theoretical level.