We used the latest GPUs from AMD and NVIDIA to compare Sniper Elite 3 after the release of Mantle.

Earlier this week, we posted a brief story that looked at the performance of Middle-earth: Shadow of Mordor on the latest GPUs from both NVIDIA and AMD. Last week also marked the release of the v1.11 patch for Sniper Elite 3 that introduced an integrated benchmark mode as well as support for AMD Mantle.

I decided that this was worth a quick look with the same line up of graphics cards that we used to test Shadow of Mordor. Let's see how the NVIDIA and AMD battle stacks up here.

For those unfamiliar with the Sniper Elite series, the focuses on the impact of an individual sniper on a particular conflict and Sniper Elite 3 doesn't change up that formula much. If you have ever seen video of a bullet slowly going through a body, allowing you to see the bones/muscle of the particular enemy being killed…you've probably been watching the Sniper Elite games. 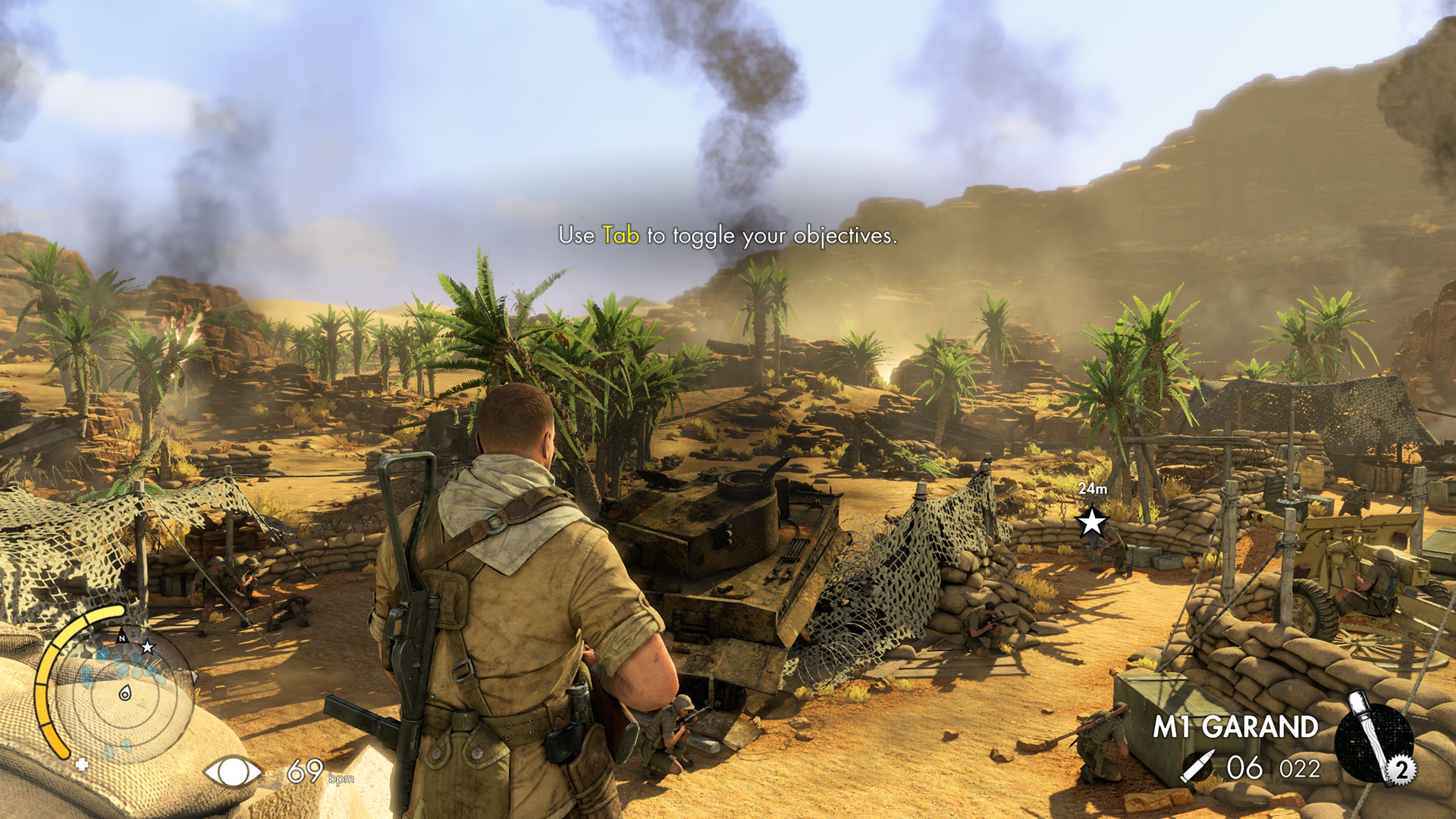 Gore and such aside, the game is fun and combines sniper action with stealth and puzzles. It's worth a shot if you are the kind of gamer that likes to use the sniper rifles in other FPS titles.

But let's jump straight to performance. You'll notice that in this story we are not using our Frame Rating capture performance metrics. That is a direct result of wanting to compare Mantle to DX11 rendering paths – since we have no way to create an overlay for Mantle, we have resorted to using FRAPs and the integrated benchmark mode in Sniper Elite 3. 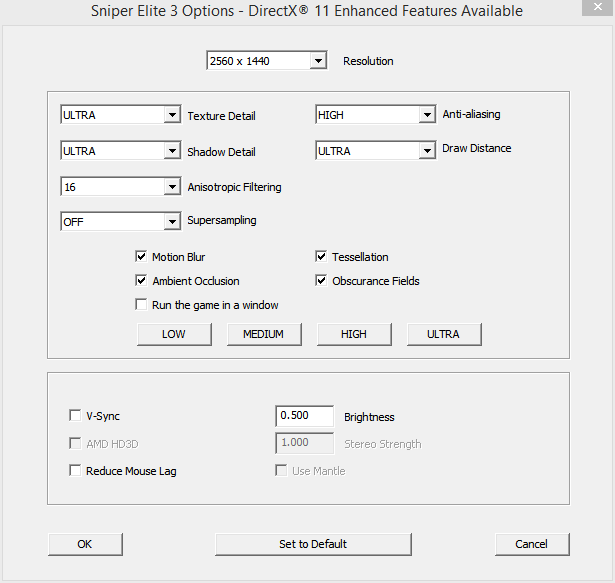 For our testing we used the Ultra in-game preset. 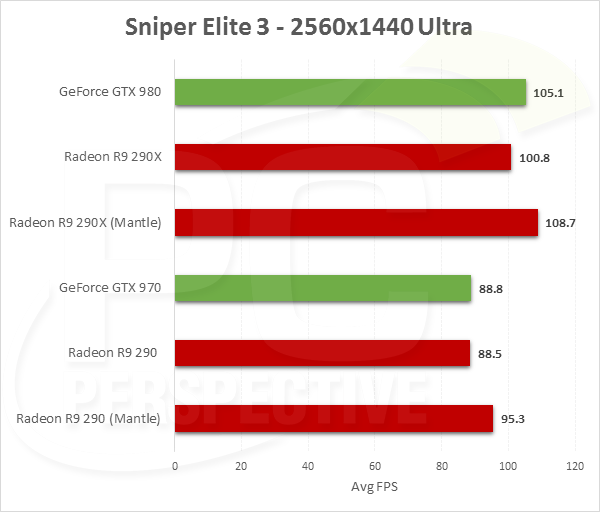 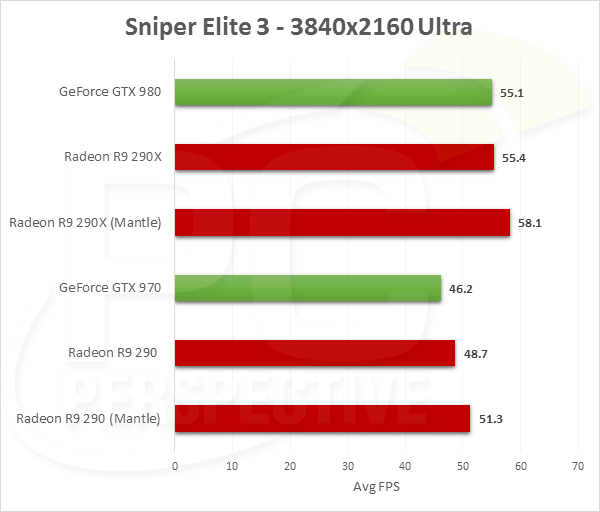 The GeForce GTX 980 is a small margin faster than the R9 290X if we look at the DX11 rendering path on 2560×1440 and matches performance at 3840×2160. But AMD's flagship card is able to gain about 7% performance with the Mantle implementation, helping to put it ahead of the GTX 980. The GTX 970 suffers more or less the same fate: matching or better performance under DX11 but slipping just behind the R9 290 when we enable Mantle in Sniper Elite 3 on the AMD cards. 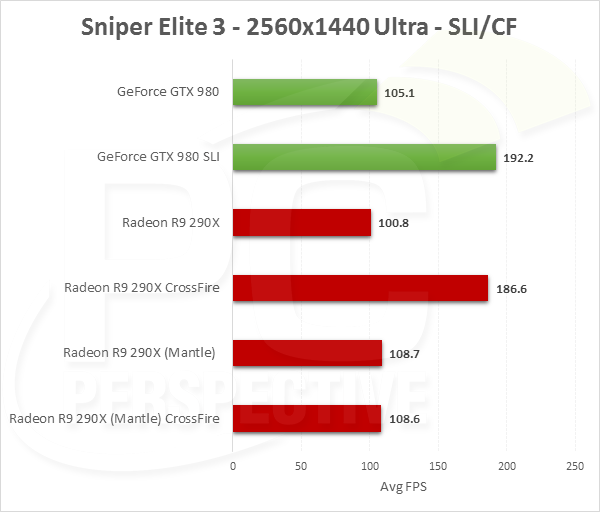 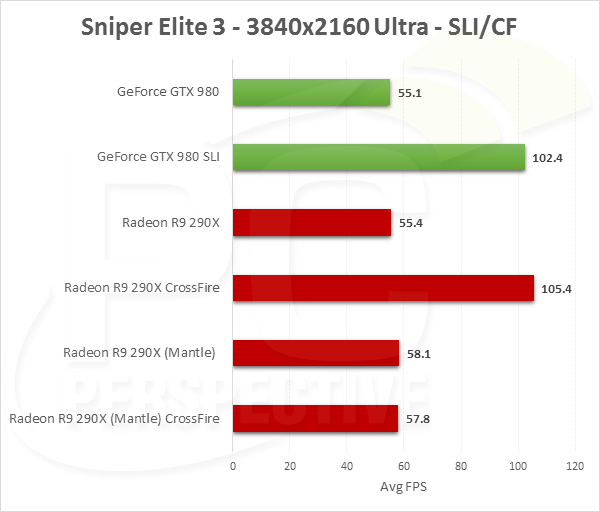 Sniper Elite 3 scales very well on both AMD and NVIDIA hardware with two GPUs, as you can see in the graphics above. At 4K for example, the GTX 980 brings in just over 55 FPS while a pair of GTX 980s is 85% faster, crossing the 100 FPS mark. AMD's R9 290X actually scales a bit better in DirectX 11 mode, 89% or so. However, Mantle doesn't scale at all with our two Radeon R9 290X cards and the second GPU is more less a bust when it comes to performance increases. Despite the benefit we saw in the single GPU performance results the Mantle API does still struggle with CrossFire implementation.

Both NVIDIA and AMD have great performance with maximum in-game image quality settings in Sniper Elite 3. The GTX 980 and GTX 970 have a small advantage at 2560×1440 but the results are nearly dead-even at 3840×2160 for those of you with 4K monitors sitting on your desks. With Mantle though, Rebellion (the game developer) was able to sneak out a bit more performance, ranging from 7.8% at 2560×1440 down to only 4% at 4K. Those changes give AMD's single GPU results the advantage but we aren't talking about enormous gains; at least not with the CPU+GPU combinations we were using here today.

The lack of multi-GPU support in Sniper Elite 3, and some of those lingering CrossFire issues in other games, still make me question the longer term viability of the API for enthusiasts. But with other games like Civilization: Beyond Earth and Dragon Age: Inquisition coming down the pipe with Mantle API support, I continue to be intrigued by AMD's direction.