The first Broadwell-Y processor has started shipping with Ultrabooks like the Yoga 3 Pro. How does it perform?

Back in August of this year, Intel invited me out to Portland, Oregon to talk about the future of processors and process technology. Broadwell is the first microarchitecture to ship on Intel's newest 14nm process technology and the performance and power implications of it are as impressive as they are complex. We finally have the first retail product based on Broadwell-Y in our hands and I am eager to see how this combination of technology is going to be implemented.

If you have not read through my article that dives into the intricacies of the 14nm process and the architectural changes coming with Broadwell, then I would highly recommend that you do so before diving any further into this review. Our Intel Core M Processor: Broadwell Architecture and 14nm Process Reveal story clearly explains the "how" and "why" for many of the decisions that determined the direction the Core M 5Y70 heads in.

As I stated at the time:

"The information provided by Intel about Broadwell-Y today shows me the company is clearly innovating and iterating on its plans set in place years ago with the focus on power efficiency. Broadwell and the 14nm process technology will likely be another substantial leap between Intel and AMD in the x86 tablet space and should make an impact on other tablet markets (like Android) as long as pricing can remain competitive. That 14nm process gives Intel an advantage that no one else in the industry can claim and unless Intel begins fabricating processors for the competition (not completely out of the question), that will remain a house advantage."

With a background on Intel's goals with Broadwell-Y, let's look at the first true implementation.

Newly branded as the Core M line, Broadwell-Y is meant to target the market looking for similar performance of today's ultra-low voltage Haswell processors but with longer battery life and more efficient designs. The Core M 5Y70 is the first, and flagship processor shipping this winter.

The comparison above pits the Core M 5Y70 against the Intel Core i5-4200U, the most popular Haswell processor used in Ultrabooks like the Yoga 2 Pro. Considering that Lenovo used the 5Y70 in the Yoga 3 Pro, it would seem that this is the replacement window that Intel has been trying to setup.

From a specification stand point, the Core M 5Y70 and the Core i5-4200U show some interesting dynamics. For example, while both are dual-core designs with HyperThreading (able to address 2 threads per core), the base clock speed on the 5Y70 is only 1.10 GHz, a full 500 MHz (45%) slower than the 1.6 GHz base clock on the 4200U. Notice however that the maximum Turbo clocks are the same - 2.60 GHz. Intel told us months ago that Broadwell-Y was designed to run at extremely low power and clock speeds when idle but still reach high performance and high clock speeds on demand, when needed, in short bursts. 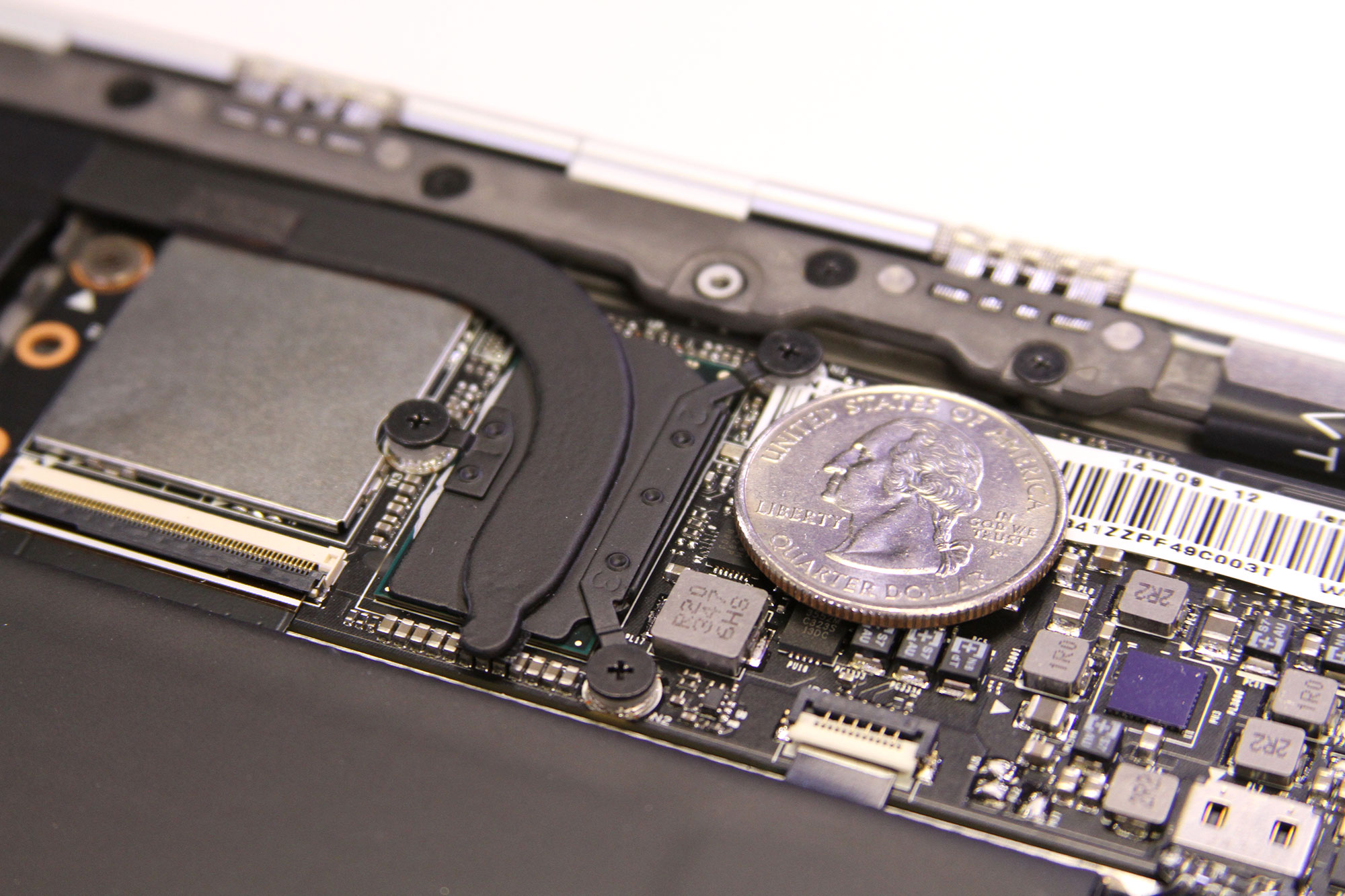 Though I am still working on the ability to accurately log the clock speed of the Core M 5Y70 through Windows Performance Monitor, my experience has shown that a clock speed of 2.5-2.6 GHz for the CPU will only last 10-20 seconds in a best case condition. After that, the processor will throttle down to a lower clock speed (I've seen 2.2 GHz and then 1.8 GHz) to limit power consumption and maintain stability in a system that is incredibly thermally constrained.

The Intel HD 5300 graphics system has more potential compute power with 24 Execution Units (compared to the 20 EUs in the Core i5-4200U) but again the clock speed variance is a major factor in graphics and gaming performance.

Most importantly, note the significant TDP difference between these two processors. The Core M 5Y70 only requires a thermal solution designed for 4.5 watts. The Core i5-4200U required a 15 watt system design - more than 3x the potential heat to dissipate. Suddenly, Intel's claims of seeing similar performance levels on Broadwell-Y as on Haswell-ULT seem much more impressive (if they live up to that).

As an example, take a look at this photo comparing the internals of the Yoga 2 Pro and Yoga 3 Pro, the former of which uses the Core i5-4200U and the latter the Core M 5Y70. 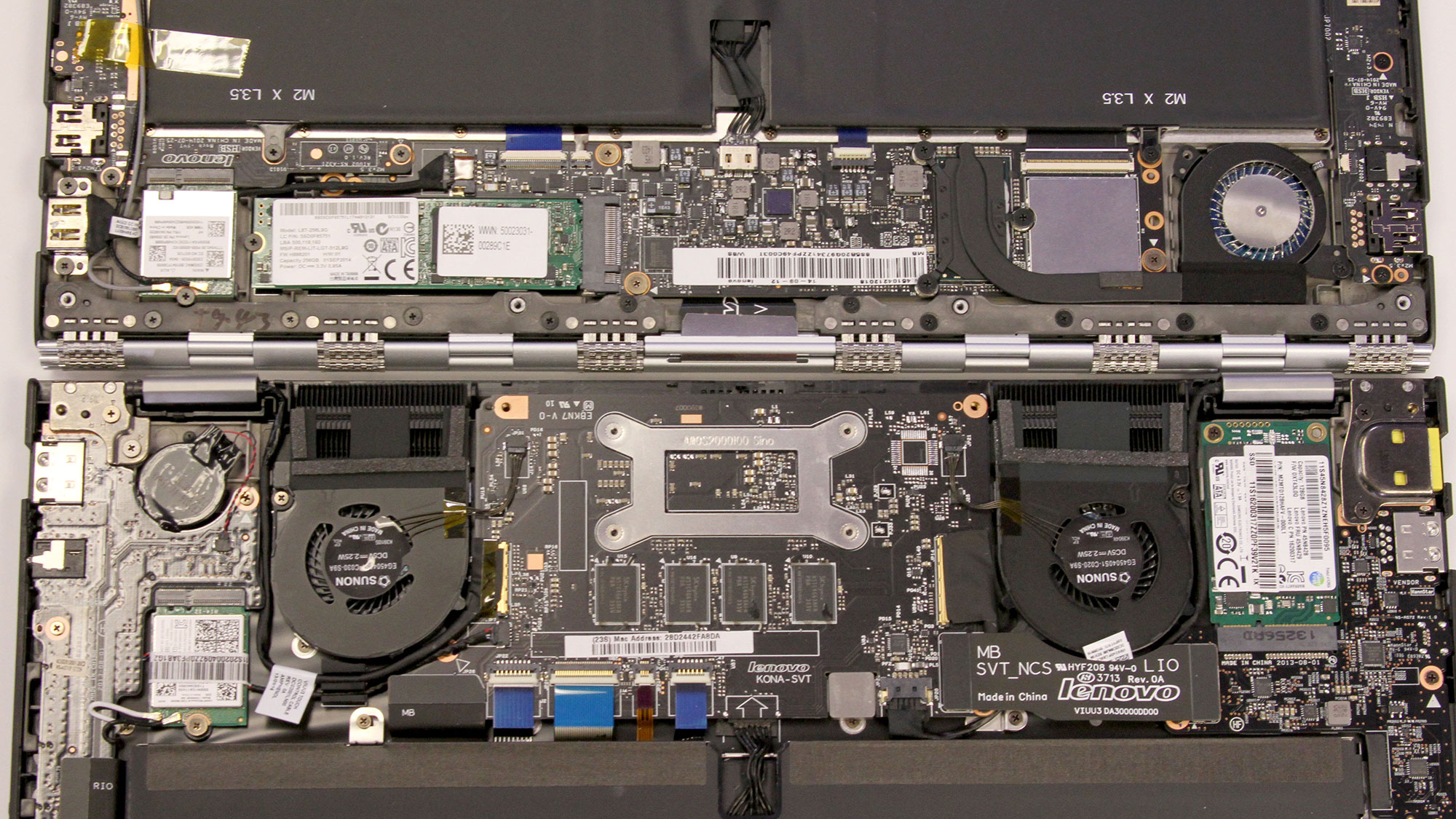 On the Yoga 3 Pro up top, look for the black heatpipe to the left of the silver shielding square - that is the location of the Core M 5Y70; that tiny little package. Now let that gaze move to the right and see the one small fan used for cooling the system. Compare that to the Yoga 2 Pro, with a much larger CPU package (see the centered silver frame outlining it) and the pair of larger fans required to keep the internals at operating temperatures. The amount of space saved, and power consumption lost, with the Core M 5Y70 and Yoga 3 Pro is astonishing.

But this isn't a review of the Yoga 3 Pro (that is coming soon), so let's dive into the specifics of our performance testing and see how the Core M 5Y70 stands up to Intel's claims.