I have spent quite a bit of time with this board and encountered a few issues.  The first was a bit of a showstopping bug that was only solved by a beta firmware that is not yet available to users from MSI.  This issue was that with the FX-9590 setting the memory to DDR-3 2133 speeds using the AMD Gaming memory and AMP timings, it would often fail to boot with two sticks of memory installed.  The beta firmware solved this particular issue so that dual channel configurations can be used at that speed. 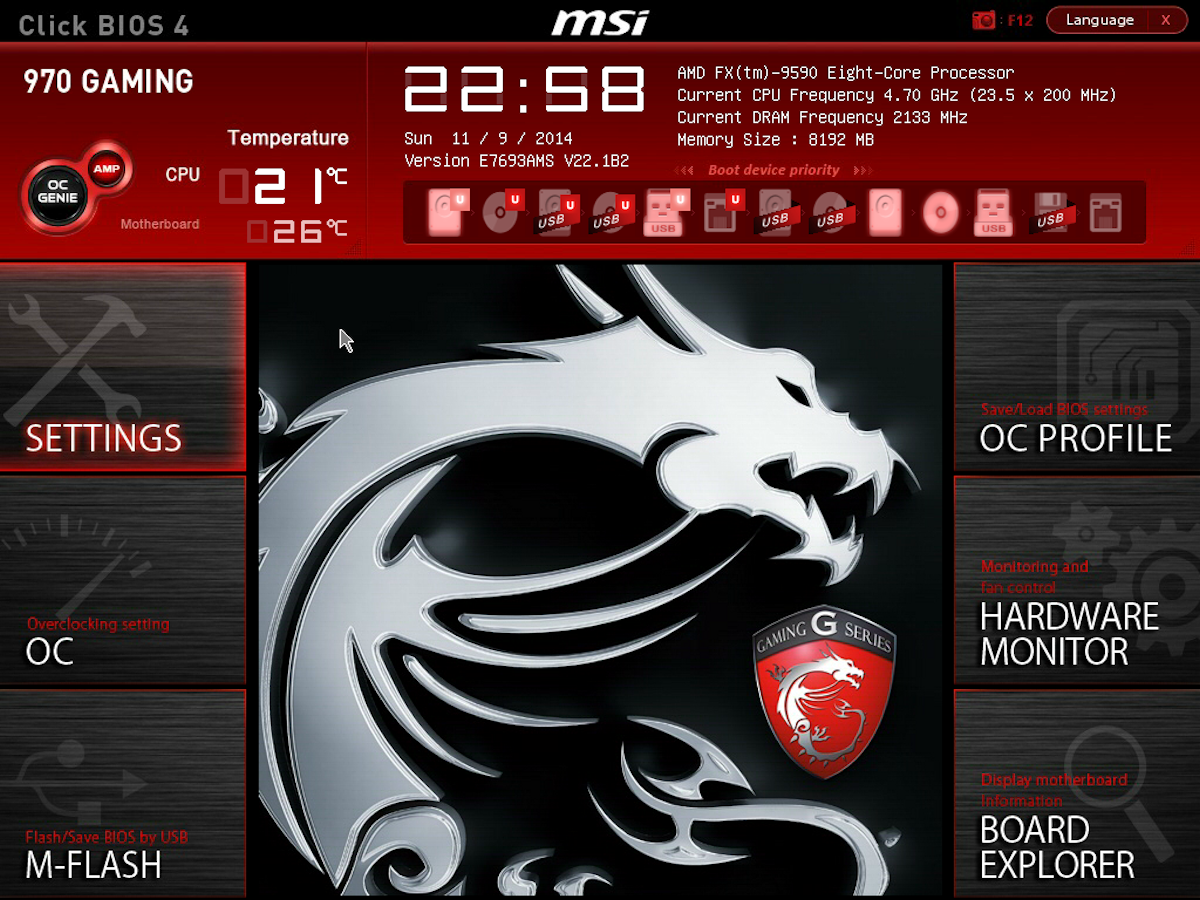 The main firmware menu is a bit busy at first, but the layout turns out to be quite logical and easy to utilize.

The second issue had to do with the audio portion of the board.  This appears to be a software issue, but when a headphone is plugged into the front panel port it would not play sound even though jack autosensing is enabled.  The only work around that I was able to find was to enable “send two streams to headphone and speakers” and disabled “disable speakers when headphones are plugged in”.  My guess is that updated sound drivers will likely fix this issue in the near future.  I was also able to "fix" this solution with a lot of fudging with the settings and plenty of reboots.  I have experienced this before with other Realtek based solutions, so it might not even be the fault of MSI.

Other than those two issues, the board performed near flawlessly.  It has been in continual use for the last two months and was in fact used with the latest FX-8370 release in September.  It has been using the aforementioned FX-9590 for daily use and has not come anywhere near burning out.  It runs relatively cool and so far problem free.

The firmware is a big positive for this particular product with easy access to any system setting one could want to tweak.  The fan control is also a great tool for beginners and experts alike.  The firmware gives plenty of information back to users about the health and performance of their system.  The interface is sharp looking and well laid out.

The audio portion is above average, but so far I do not think that it matches that of the Gigabyte G1.Sniper.A88X or the recently released Asus Crossblade Ranger.  The headphone issue is troubling, but this is again likely a software fix.  Using multiple headphones revealed that the front audio ports seem a little underpowered, which is odd considering that it is supposed to have dual amplifiers for rear output and front panel output.  I again wonder if this is a software issue that can be fixed by an updated driver.  If I find out more, I will post updates. 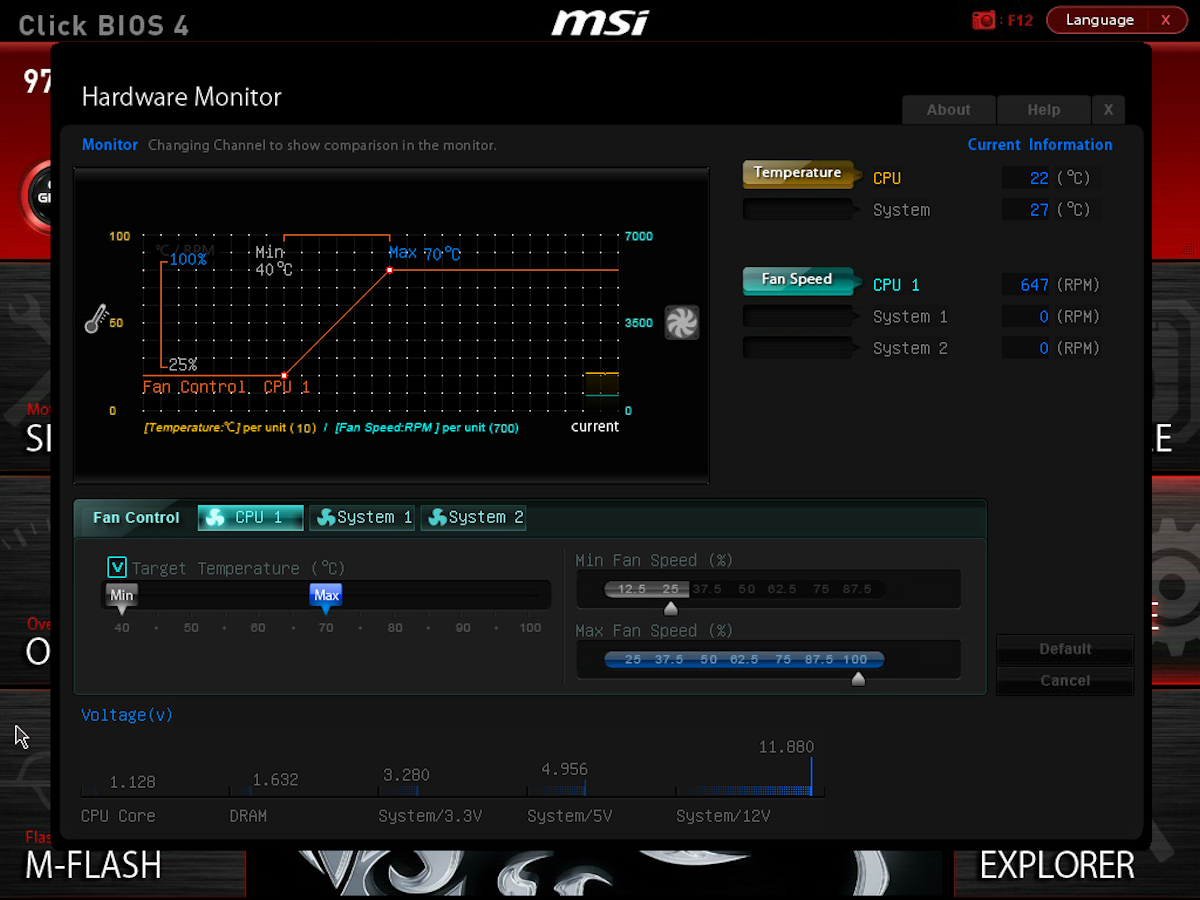 The fan control and monitoring section is easy to access and change around to personal preferences when it comes to cooling and noise.

When the board is running the red accent lights throughout the audio portion make it look really sharp in a windowed case.  It is not too bright, and the effect is more subtle than garish.  The board seems to run without issue, other than the described memory problem above.  I think most users can easily get by with solid DDR-3 1866 memory kits that likely cost a little less than the 2133 kit I was using.  Performance will not take a nosedive with the lower spec memory, and users will likely experience a more stable configuration while waiting for the inevitable firmware upgrade.

The bundle included with the board is not impressive, but it is not bare.  The board comes with the door hanger, the MSI Gaming badge to attach to their case, SATA cables, rear ATX plate, SATA cable labels, manual, quick start sheet, and driver disk.  The bundle may be a little less impressive than other enthusiast grade gear, but we must remember that it only costs around $90 US.  MSI cannot really afford to go all out with a fully featured bundle when they are already pinching pennies to get the motherboard out the door at that price.

Once I solved the memory issue, the board was a dream to work with.  I was able to get the audio to full functionality by playing with different setting combinations.  The Sound Blaster Cinema 2 does the job it is supposed to, but personally I do not like a lot of the effects that it pushes.  I find that the audio takes on some characteristics that I do not appreciate, such as enhanced bass when Crystalizer is enabled.  That setting also tends to produce some higher frequency artifacts that become apparent when using higher end headphones.  Users may feel differently with their tastes and playback setups, but at least MSI gives the user the option of enabling these features if they see fit.  Surround effects do work to a degree, but do not expect fully immersive results without some kind of hardware DSP pushing these effects.  This could take on a different aspect if used with the appropriate AMD video card that supports TrueAudio, but I did not get the chance to test such a setup. 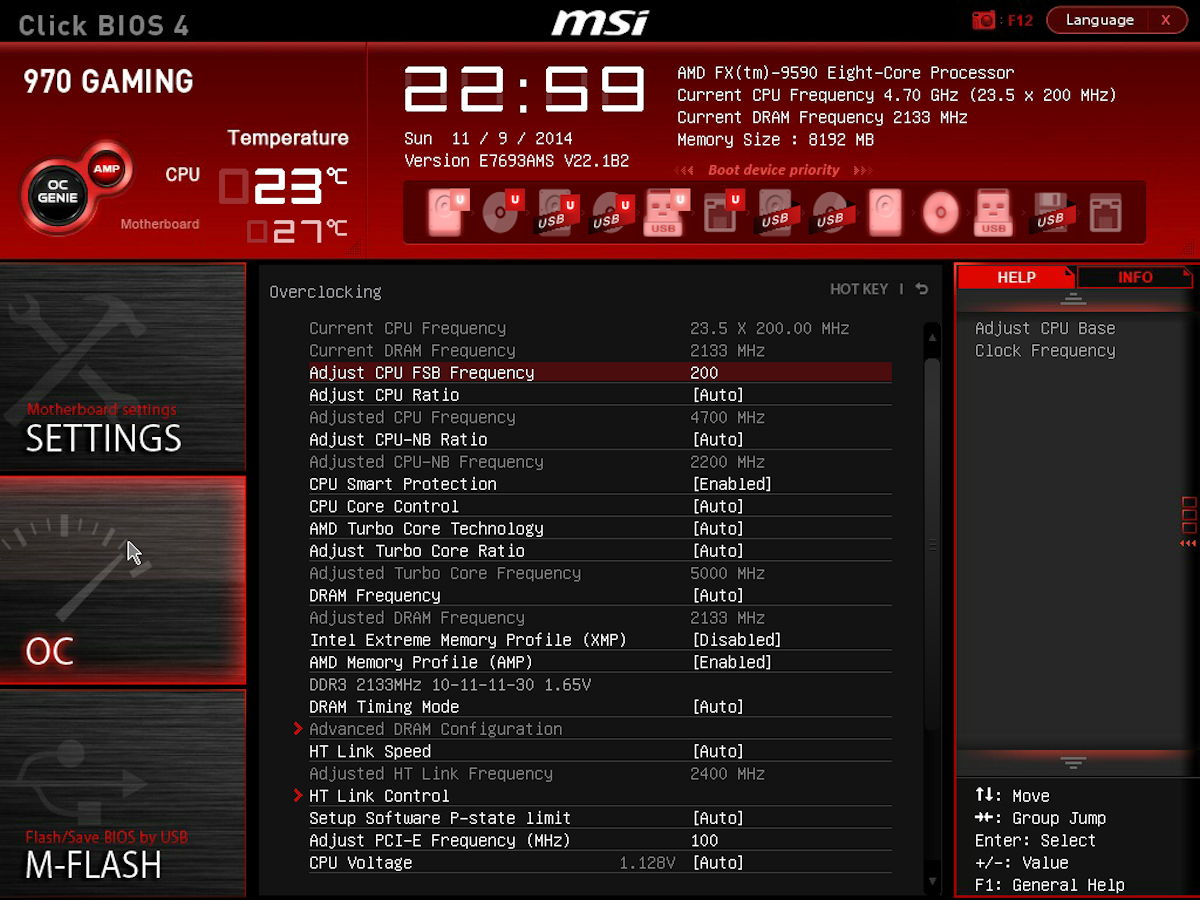 The rest of the system settings are easy to get to and well explained in the firmware.

MSI might not have been planning on me doing a long term review of this product, but that is what they got!  I have used this board with the FX-6350, FX-8350, FX-8370e, FX-8370, and FX-9590 processors.  It ran every single one of them without an issue.  This was of course for the AMD CPU refresh article in early September.  I really could not have asked for a more solid platform for that particular review.

I must admit to a dearth of current AM3+ motherboards to compare this product to.  I believe the last AM3+ review I did before this was the Asus Crosshair V Formula Z way back in early 2013.  Since the Crosshair V FZ is the only board I have in residence, that is the primary product that I am comparing the 970 Gaming to.  The Crosshair board comes in at a significantly higher price, which is in the $225 US range.  When you compare and contrast features, price, and performance, the 970 Gaming holds up very well against the Crosshair V FZ. 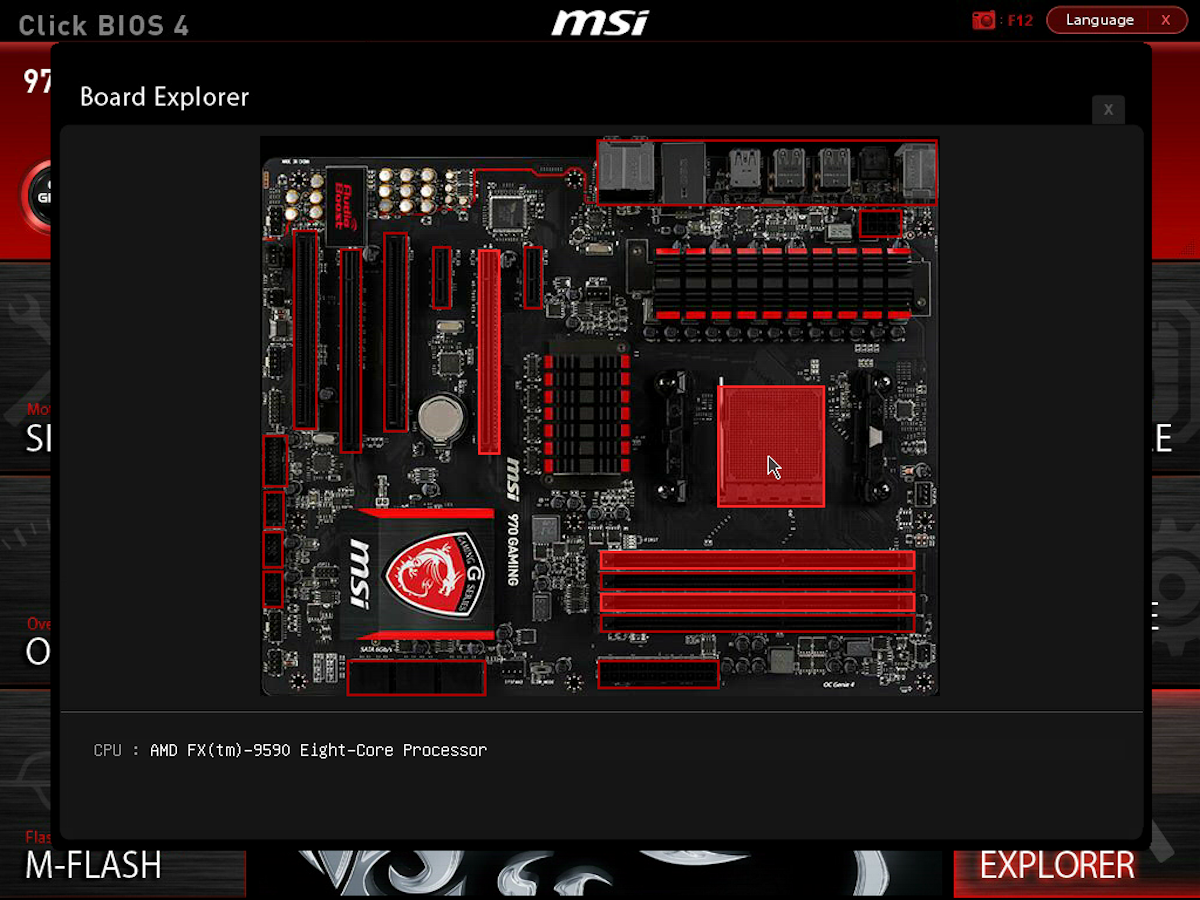 The motherboard explorer function shows off all of the major pieces of the board, as well as give infromation as to what SATA ports and USB ports are plugged in and running.

All of the following results were gathered with the FX-9590 installed.  The 970 Gaming does not officially support this particular processor, but it has run it for months now as a daily use machine without a problem.  The VRMs do not become overly hot when the CPU is at load and the board did not exhibit stability issues with such a high TDP CPU.