Though I only had a short time with the MFAA-enabled driver, I was able to sit down and play some Crysis 3, Battlefield 4 and GRID 2, running all of them through some benchmarking testing as well. Clearly we want to put the performance claims NVIDIA is making about MFAA to the test but image quality claims are important as well. And in this case, they just happen to be a bit more complex to do.

On the last page I mentioned that only direct hardware capture enables you to see the benefits of MFAA as it would appear on the screen – screen grabs and FRAPs won't cut it here. Luckily our Frame Rating performance capture and analysis system already allows to do direct hardware capture of the output from the GTX 980 we used in our testing.

Another problem comes up when you we realize that MFAA is a temporal AA, meaning the sample patterns change over time. NVIDIA tells us that the pattern changes on a frame-to-frame basis, using two samples in frame 1, then two different samples in frame 2, then two different sample locations in frame 3, etc. These are then filtered back together through a custom (and apparently very hush-hush) section of the Maxwell hardware, resulting in the combined, smoother image. However, because these sample patterns are being combined on a frame to frame basis to a composited image, movement on the screen will affect the final output.

During a static scene, where the character is not moving, the alternating pattern of the AA samples in 4xMFAA should be able to create a new perfect match to the visual quality of 4xMSAA. However, as soon as you start to move on the screen, that changes. Imagine a strafing animation in a shooter where the character passes in front of a door. Inside the door is a very dark scene, but outside it's very bright. The edge between that will have clear aliasing and is typically the a location we would use to evaluate AA quality. With MFAA, and other temporal AA methods, issues arise when the pixels on your screen move from the bright part of the scene to the dark; since previous frames are being used to calculate the color of the current frame, there is the potential for degradation.

NVIDIA claims that it's filtering algorithm is intelligent enough to take this into consideration and even in the worst case scenario, the quality of 4xMFAA will never be worse than that of standard 2xMSAA. But you have the potential to see quality nearing that of 4xMSAA.

Does it live up to that? Below I have included screenshots to demonstrate some interesting locations in our BF4, GRID 2 and Crysis 3 test runs. 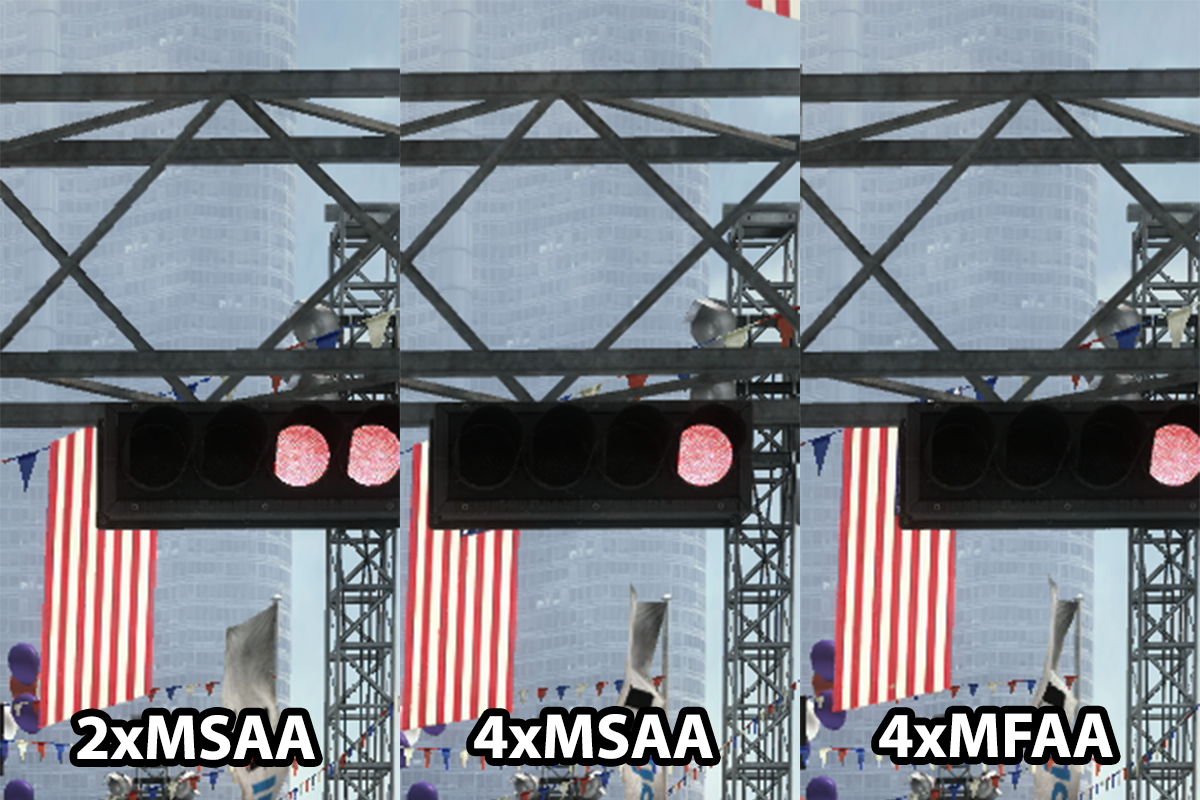 Our first comparison comes from GRID 2 and you can see in the metal frame work of the signage that the MFAA implementation is definitely a step above that of the 2xMSAA screen capture. Here, in a very static portion of the benchmark, the quality of 4xMSAA and 4xMFAA are difficult to distinguish between. 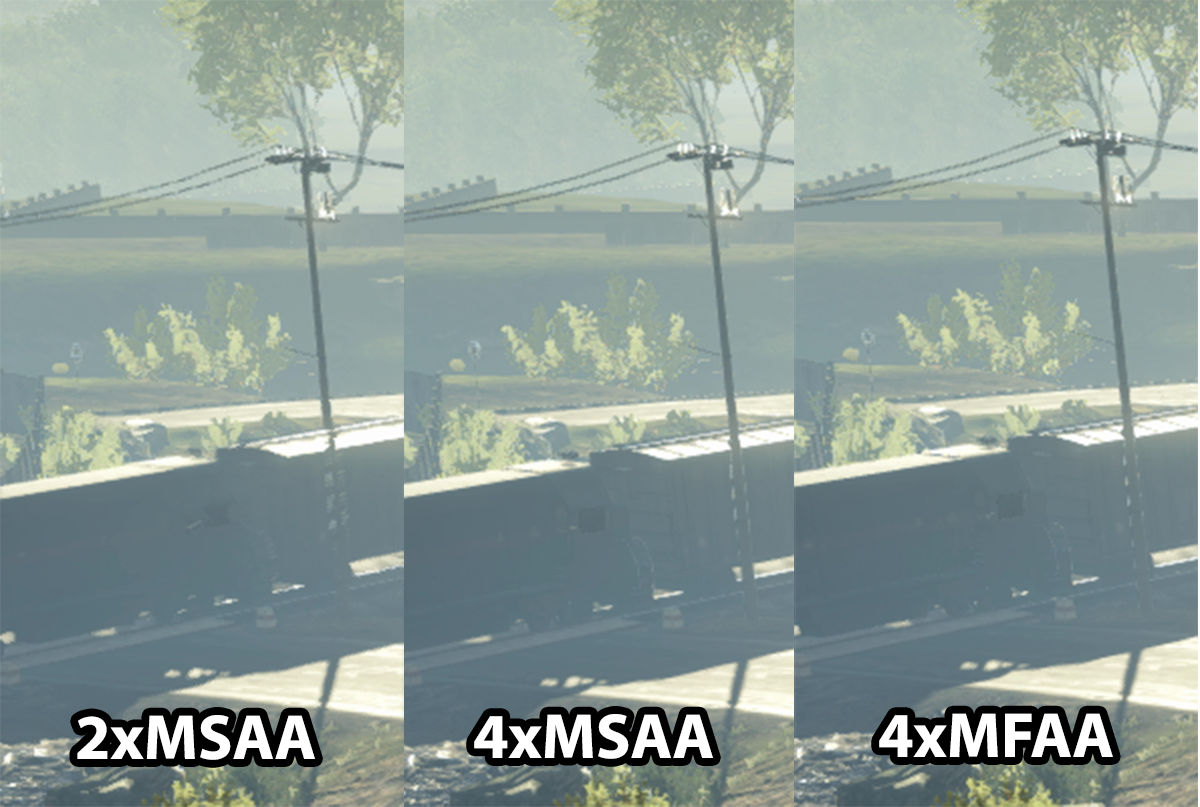 Next up is Battlefield 4 and a look into the distance at a collection of telephone poles. In this case the screen capture comes from a portion of the game that is moving. Once again we see that NVIDIA's MFAA is definitely a quality step above 2xMSAA and nearly identical to the result of the 4xMSAA image. 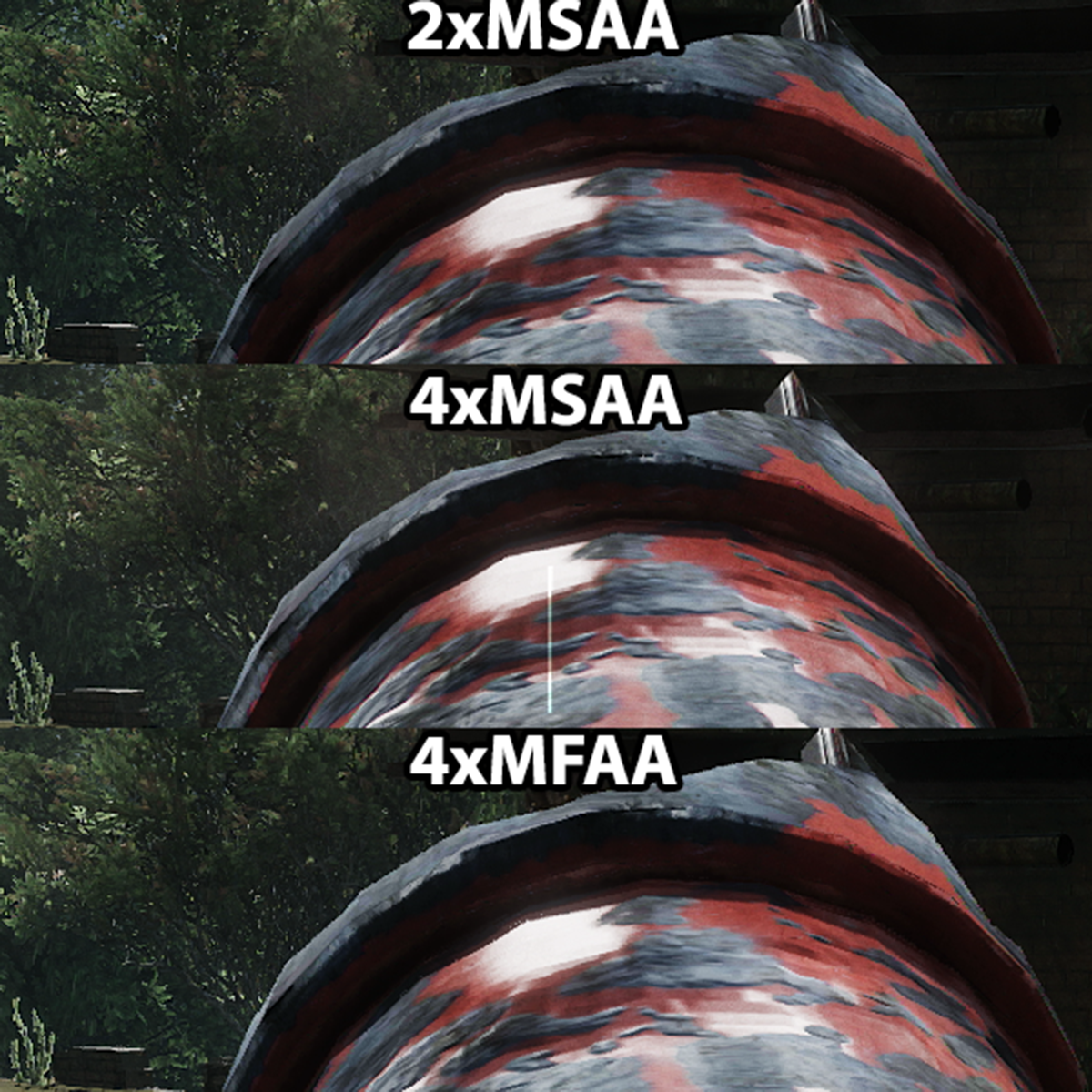 Finally, we have our most difficult comparison in Crysis 3. Look along the top edge of the red pipe we are walking across and notice the jagged edges at 2xMSAA that are mostly gone at 4xMSAA. With 4xMFAA though, the result is better than 2xMSAA but still a clear step behind that of the standard 4xMSAA implementation.

Still frame grabs are one way to look at anti-aliasing performance but really the ideal solution would be to see it in motion. With temporal AA you have the possibility of shimmering along edges as the AA patterns change. We did attempt to make a video showcase this from GRID 2 (again using hardware capture) and though it's difficult to see in the video itself, from my several hours of using MFAA I didn't not see any egregious instances of anomalies.

Though you're mileage will vary from game to game, because NVIDIA is taking the white list approach with the new multi-frame sampled anti-aliasing, we would have to assume that NVIDIA is looking for those exact visual issues and will either attempt to fix the implementation of MFAA for them or just remove the option for MFAA on that game forever.