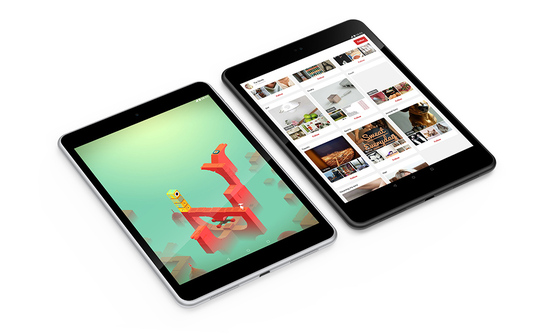 Sticking with the Lollipop theme of today is a comparison of two large tablets which will be competing for the same market, both powered by the 64 bit version of Lollipop.  They are both fairly large, the Nokia N1 is 201 x 139 x 6.1mm (7.9 x 5.4 x 0.25") and a weight of 318g, the Nexus 9 is 228x154x7.9mm (9 x 6 x 0.3") at a weight of 425g.  Both of the tablets have IPS displays with a resolution of 1536 x 2048, obviously the smaller Nokia has a slightly higher pixel density.  It is when you examine the internals that the differences really start, Nokia has gone with a quad-core 2.3GHz Atom Z3580 while the Nexus is powered by a dual-core 2.3GHz Tegra K1.  The Nokia is the tablet of choice for those who take selfies as the front facing camera is 5MP though both have an 8 megapixel camera on the back.  The Nexus will likely last longer on the run with a 6,700mAh battery compared to Nokia's 5,300mAh battery.  The Inquirer has not had a chance to run benchmarks but there is one final statistic worth noting, the Nexus 9 is to retail for $400 while the N1 is planned to sell for about $250.