AMD is releasing a special edition driver that claims to move the bar forward in performance, features and stability.

There are smart people that work at AMD. A quick look at the company's products, including the APU lineup as well as the discrete GPU fields, clearly indicates a lineup of talent in engineering, design, marketing and business. It's not perfect of course, and very few companies can claim to be, but the strengths of AMD are there and easily discernible to those of us on the outside looking in with the correct vision.

Because AMD has smart people working hard to improve the company, they are also aware of its shortcomings. For many years now, the thorn of GPU software has been sticking in AMD's side, tarnishing the name of Radeon and the products it releases. Even though the Catalyst graphics driver has improved substantially year after year, the truth is that NVIDIA's driver team has been keeping ahead of AMD consistently in basically all regards: features, driver installation, driver stability, performance improvements over time. 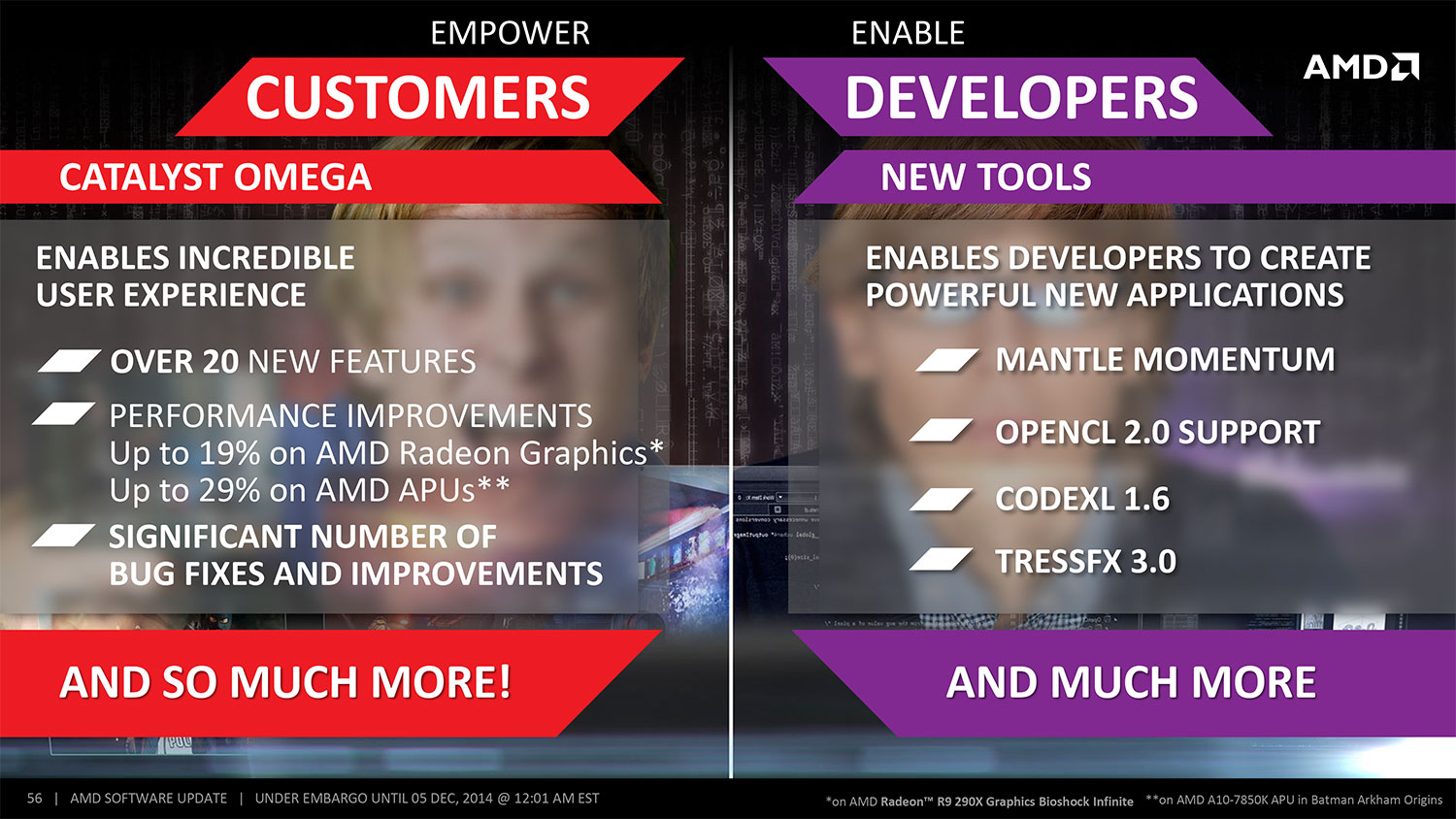 If knowing is half the battle, acting on that knowledge is at least another 49%. AMD is hoping to address driver concerns now and into the future with the release of the Catalyst Omega driver. This driver sets itself apart from previous releases in several different ways, starting with a host of new features, some incremental performance improvements and a drastically amped up testing and validation process. 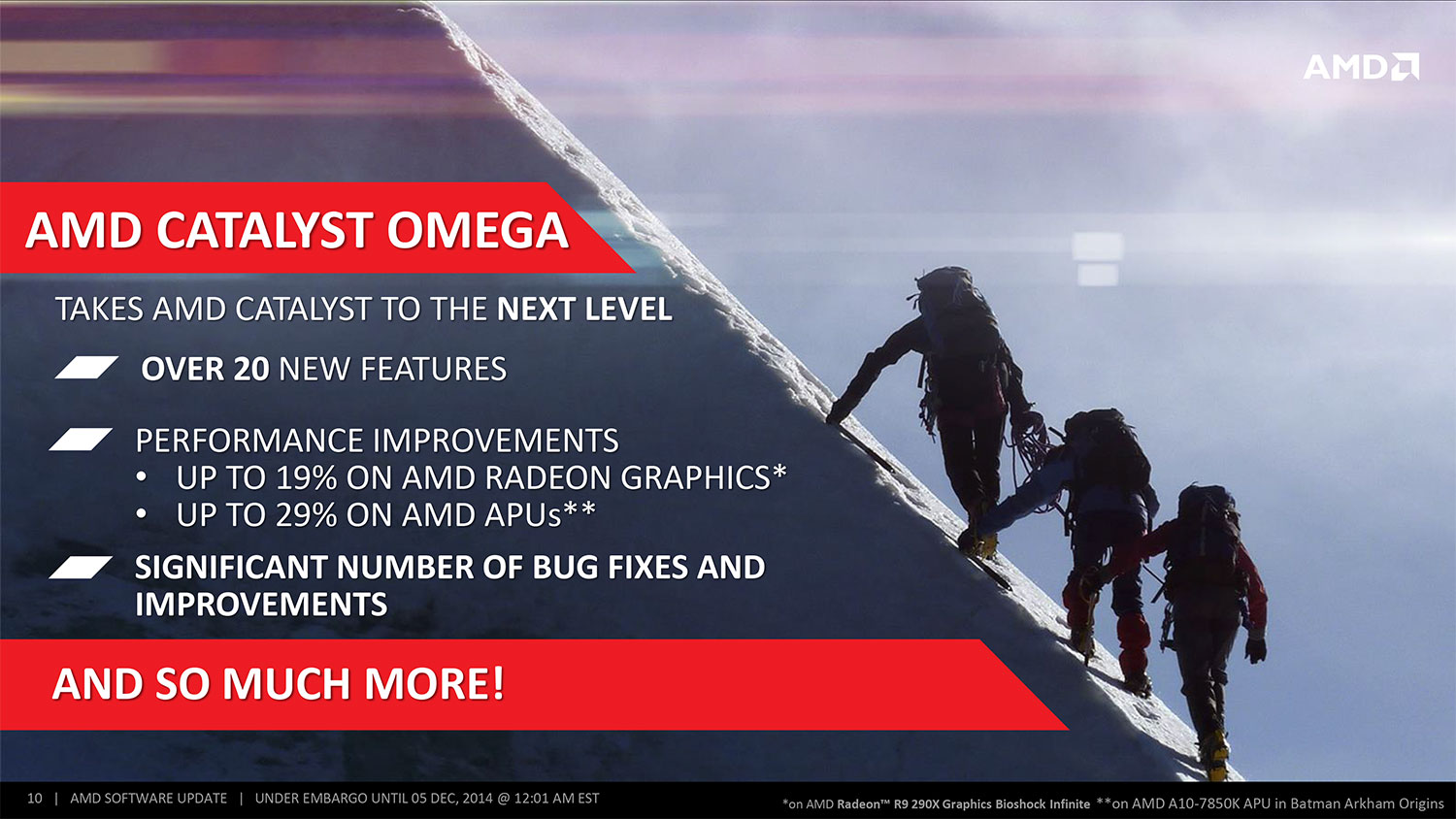 AMD considers this a "special edition" driver and is something that they plan to repeat on a yearly basis. That note in itself is an interesting point – is that often enough to really change the experience and perception of the Catalyst driver program going forward? Though AMD does include some specific numbers of tested cases for its validation of the Omega driver (441,000+ automated test runs, 11,000+ manual test runs) we don't have side by side data from NVIDIA to compare it to. If AMD is only doing a roundup of testing like this once a year, but NVIDIA does it more often, then AMD might soon find itself back in the same position it has been.

UPDATE: There has been some confusion based on this story that I want to correct. AMD informed us that it is still planning on releasing other drivers throughout the year that will address performance updates for specific games and bug fixes for applications and titles released between today and the pending update for the next "special edition." AMD is NOT saying that they will only have a driver drop once a year.

But before we worry about what's going to happen in the future, let's look into what AMD has changed and added to the new Catalyst Omega driver released today.

AMD has put a lot of work into this new driver and there are several interesting new features added that impact both discrete GPU and integrated GPU (APU) users. 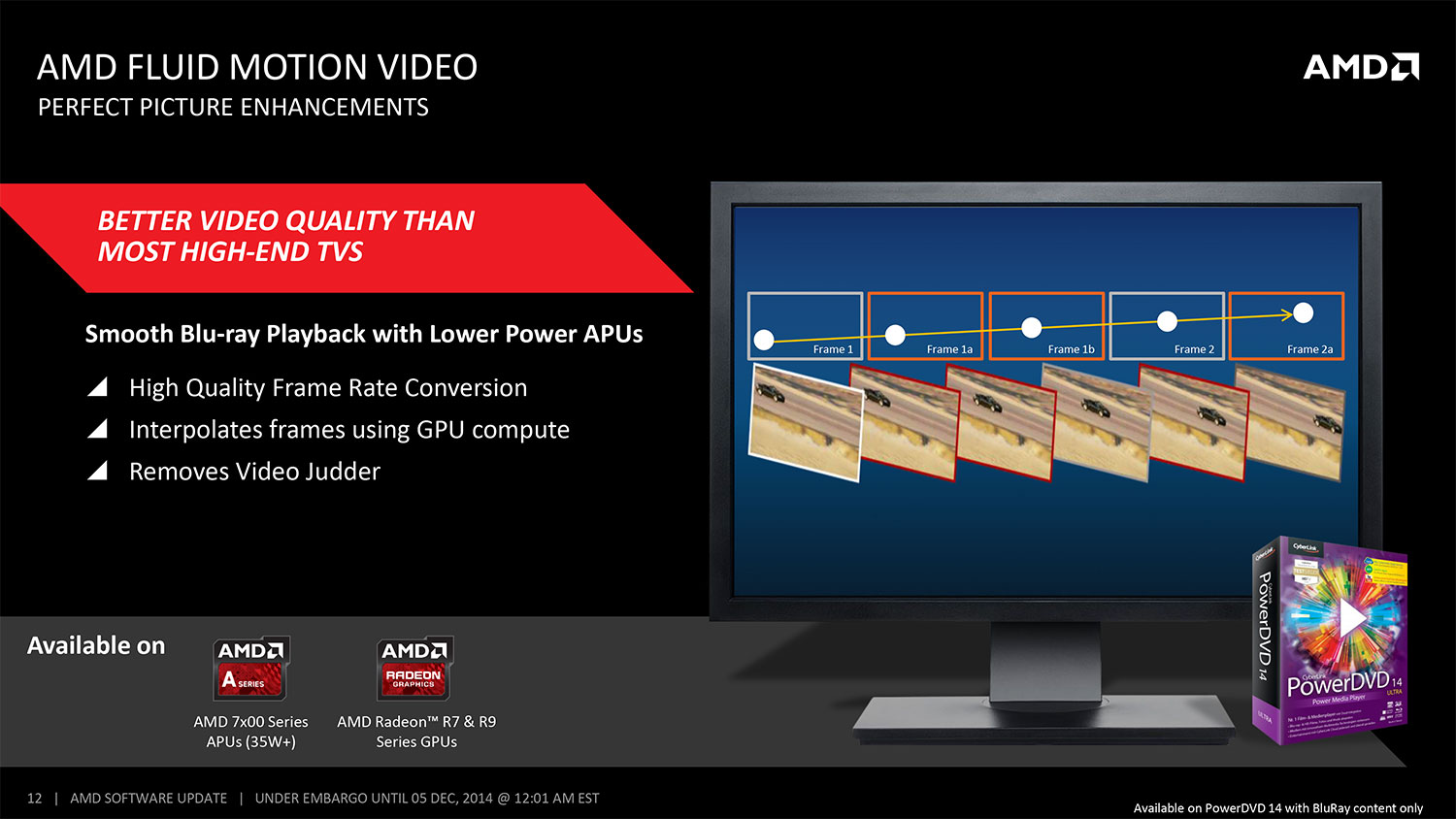 Several of the new features center around improvements to video playback. Take AMD Fluid Motion Video for example, applicable to 35 watt and above APUs and all R7 and R9 discrete GPUs. This feature attempts to smooth out playback of Blu-ray with frame rate conversion and interpolation. Video judder is removed though movie purists might notice some of these changes and wish to disable them. 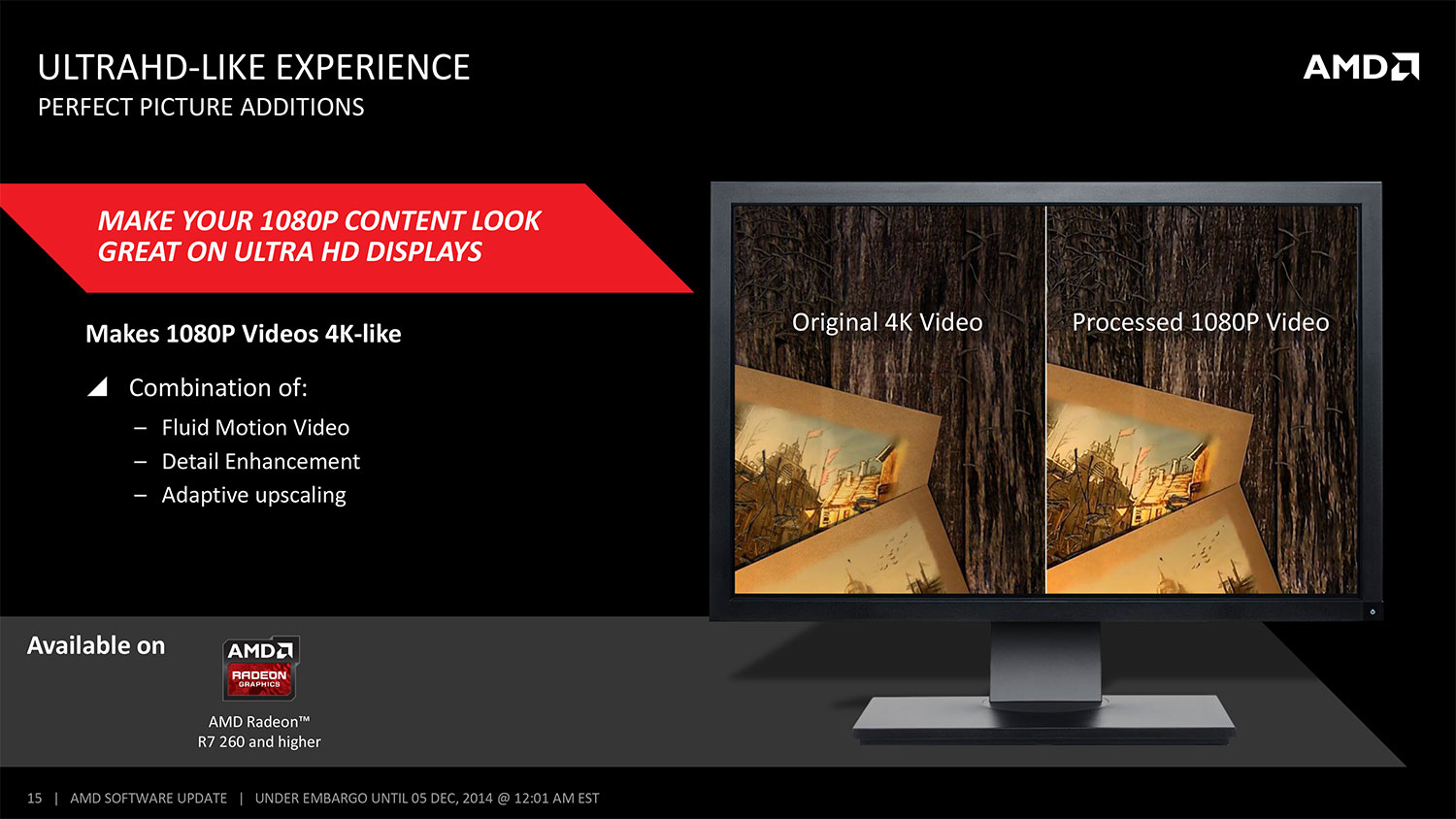 AMD is implementing a new video scaling engine that will upscale 1080p content for users with 4K monitors (that number continues to grow as 4K panels drop in price). While nothing will magically make 1920×1080 content into full 3840×2160 content, using a combination of the Fluid Motion Video, detail enhancements and finely tuned adaptive upscaling can have a substantial improvement in the video experience. In my quick testing here before launch the video quality is definitely improved though that effect is more noticeable and acceptable with some types of content than with others. 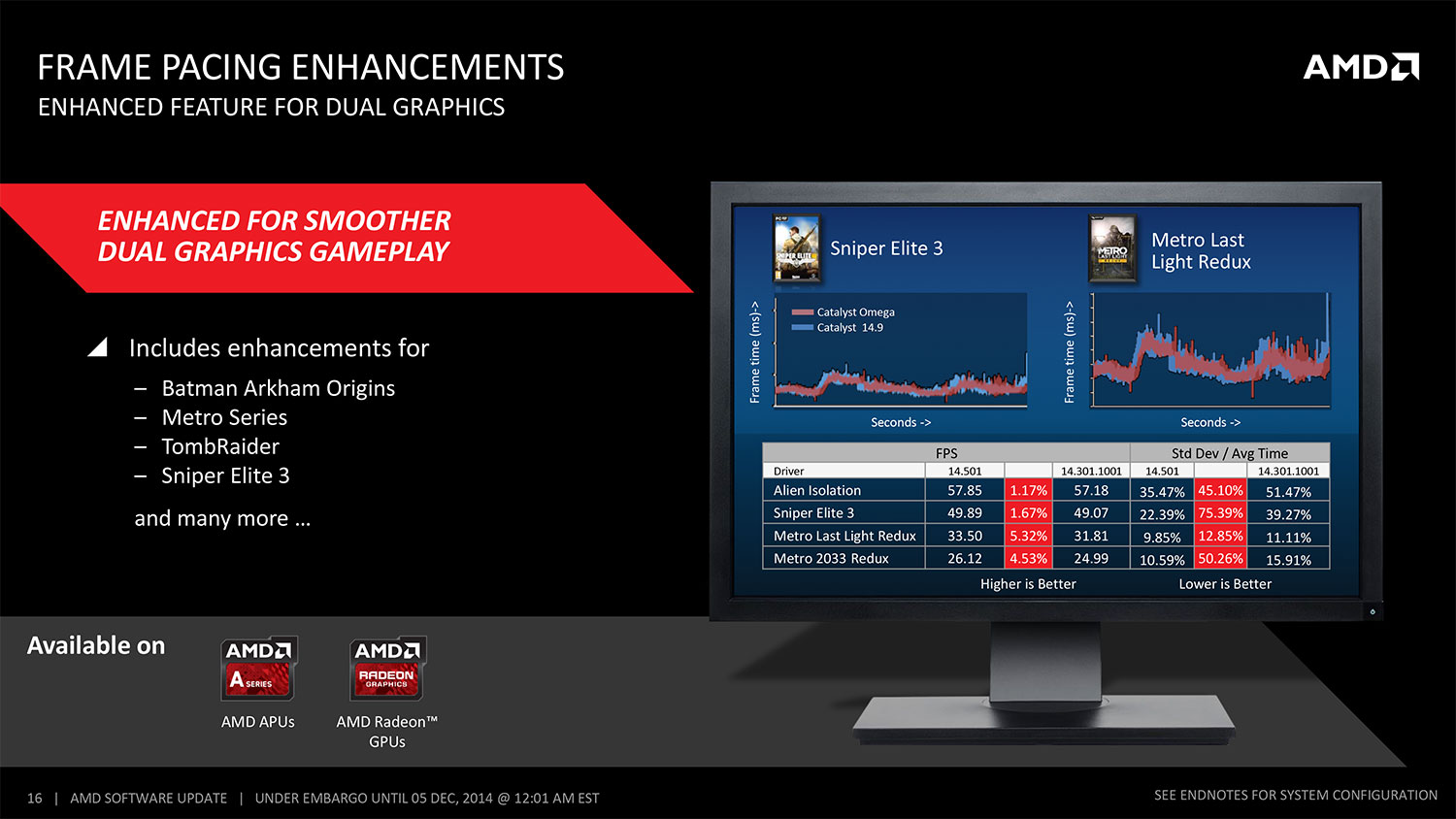 Frame pacing and improved gaming smoothness continues to be a sticking point for AMD's driver team and with the Catalyst Omega release users of AMD Dual Graphics, a combination of an AMD APU and a lower cost discrete GPU, will see improvements. Several games are called out directly here including the Metro series, Tomb Raider and Sniper Elite 3. We'll have more testing on these differences in the very near future, so check back soon. We are glad to see AMD is driving forward with its promise to make gaming smoother and more enjoyable for gamers of all kinds. 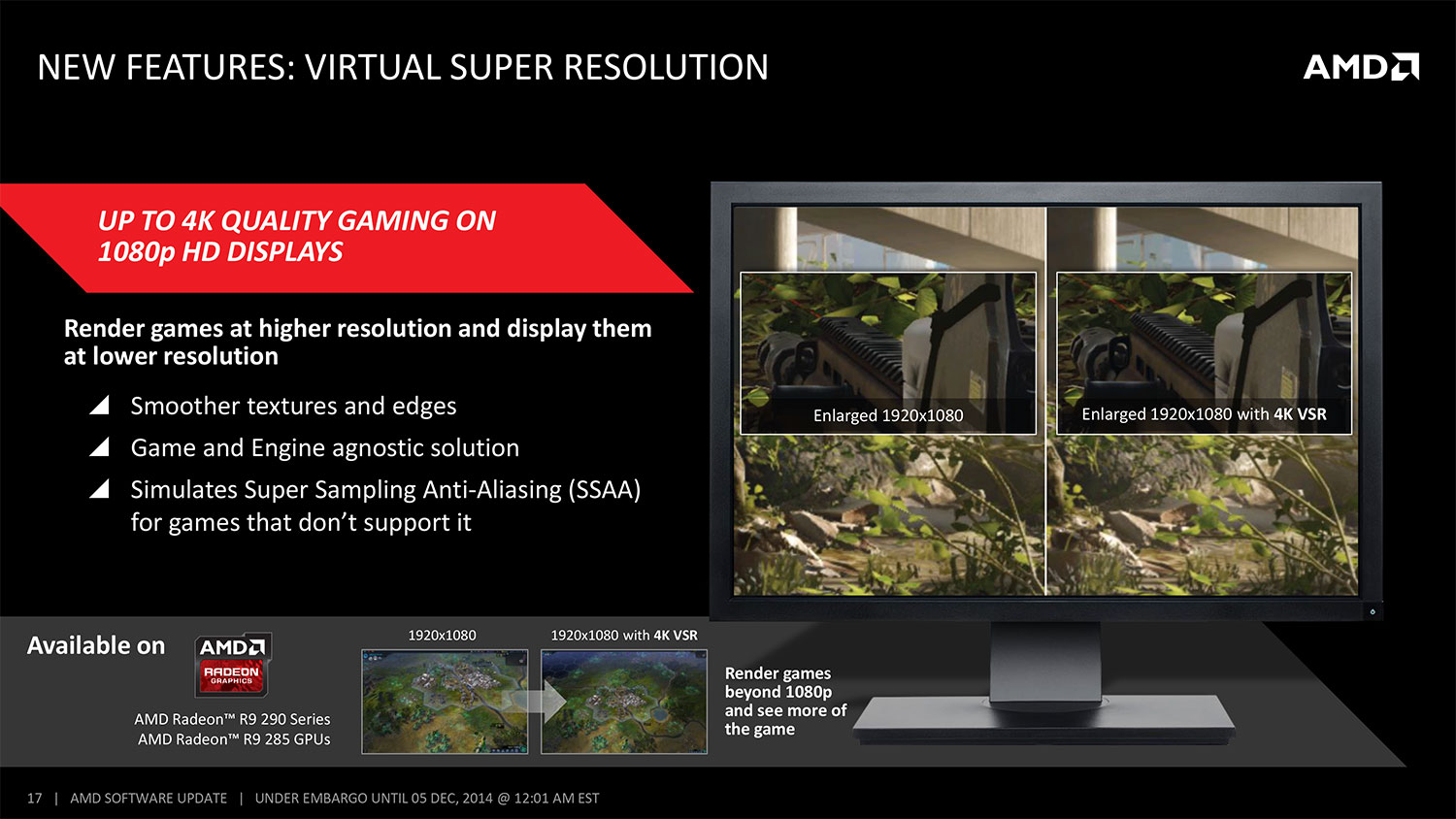 Easily the most interesting feature addition with Catalyst Omega is Virtual Super Resolution, the ability for AMD's driver to present resolutions higher than the installed panel for games (and Windows) to render to. If this sounds familiar it, it should: NVIDIA launched Dynamic Super Resolution (DSR) just this past September with the launch of it's Maxwell desktop GPUs. The idea is essentially the same: render a game at higher resolution than your currently supported display and then filter that image down to the native resolution of your panel. If you have the GPU horsepower available, you can render at game at up to 4K resolution and then filter it down to your 1920×1080 panel, revealing more detail and presenting better imagery than you would be able to get otherwise.

AMD's VSR has more restrictions than NVIDIA's DSR, though it is enabled through exactly the same methods (enable in driver, select in game). You can see in the table above that there are some restrictions to note, including GPU support. For example, only the R9 285 using the Tonga GPU is able support 4K upscaling capability. The R9 290X and R9 290, higher powered GPUs but based on a slightly older GCN architecture, don't have the scalar capability to reliably downsample from 4K to 1080p and thus they are limited to 3200×1800. That will definitely still present a higher quality image than native, it's just a note-worthy hiccup in AMD's implementation

I did ask about other GPU support and AMD stated that it MIGHT be willing to implement VSR for other GPUs but it have to implement a software/shader based version of the scaling process.

Though I have only limited information currently, AMD claims that VSR will have a 0% performance penalty for its scaling process. It appears that AMD has implemented a polyphase multi-tap solution for its scaling; these methods are complex but bring about good image quality while reducing any potential noise in the image. 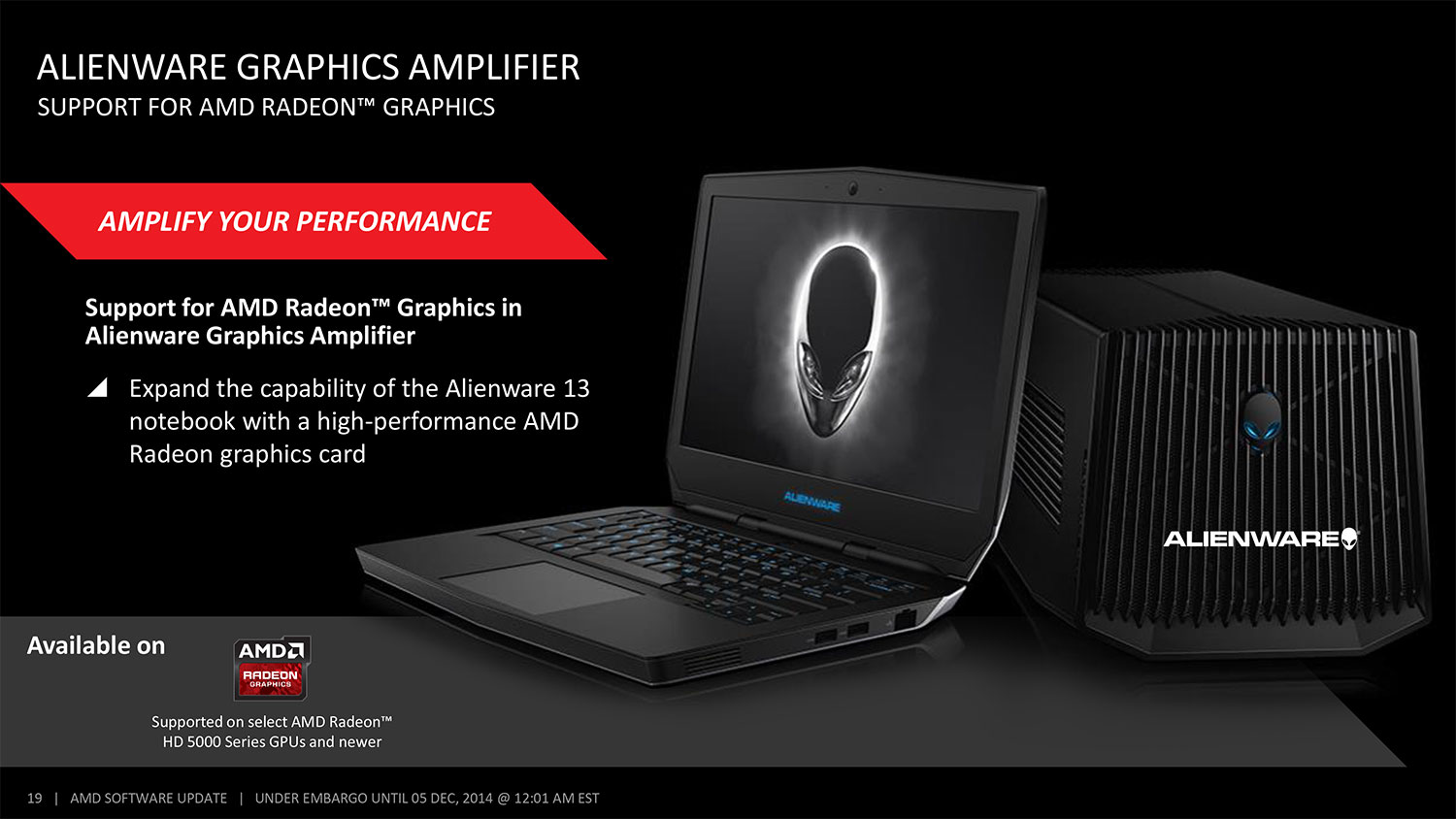 A little over a month ago Alienware announced an external unit, called a Graphics Amplifier, that allowed a discrete graphics card to be used with a specific Alienware gaming notebook. With Catalyst Omega, the unit will now support AMD graphics cards officially with some dramatic performance increases when using high end hardware like the Radeon R9 290X in it. 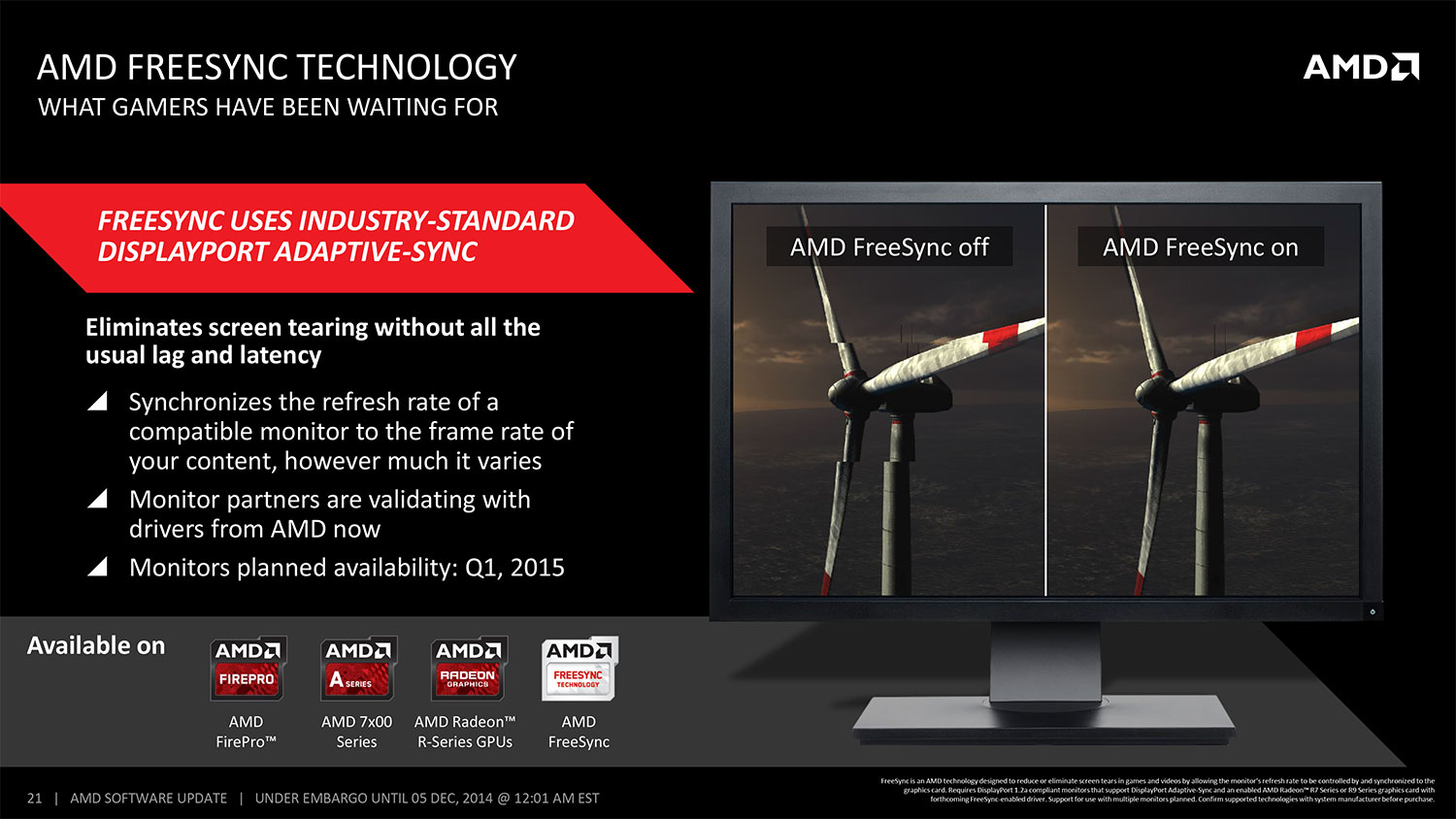 The AMD Catalyst Omega driver adds support for FreeSync, or DisplayPort's Adaptive Sync feature. Now before you get overly excited, this is only a first step for the technology's release as now display vendors and partners with AMD can begin to test and validate any potential displays coming out some time in 2015. In case you missed it, Samsung announced support for FreeSync in several upcoming monitors due in 2015. Trust me, we are still following up with AMD continuously to try to get more information and hands on time with FreeSync. You'll know more when we do! 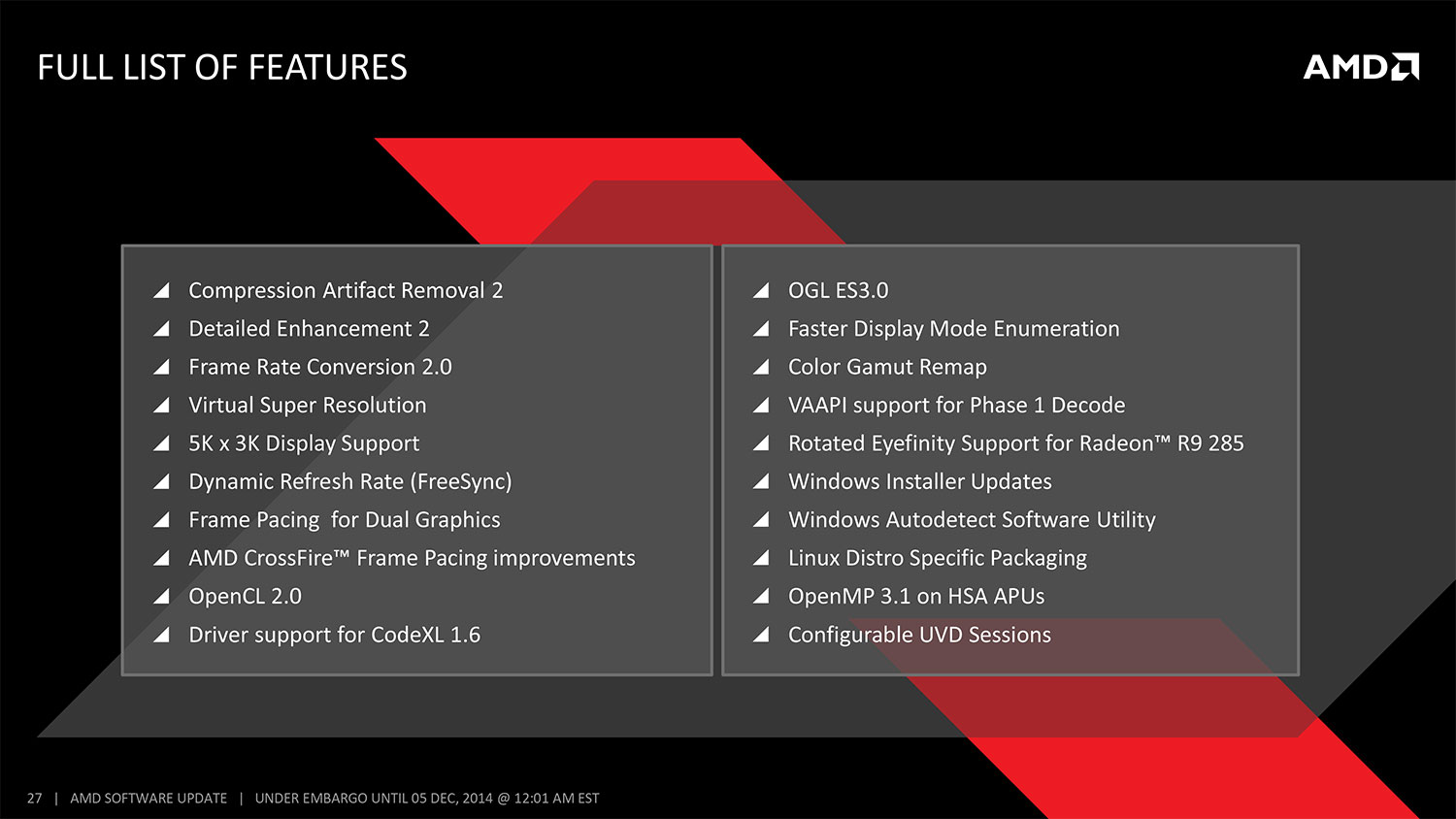 There are even more features than the ones discussed above including slightly more obtuse additions like color gamut remap support, installer updates and Linux distro specific packaging. But what about the world of performance improvements – what does AMD claim to offer with Omega?