While every driver claims to improve performance from one version to the next, the Omega driver is doing the same. 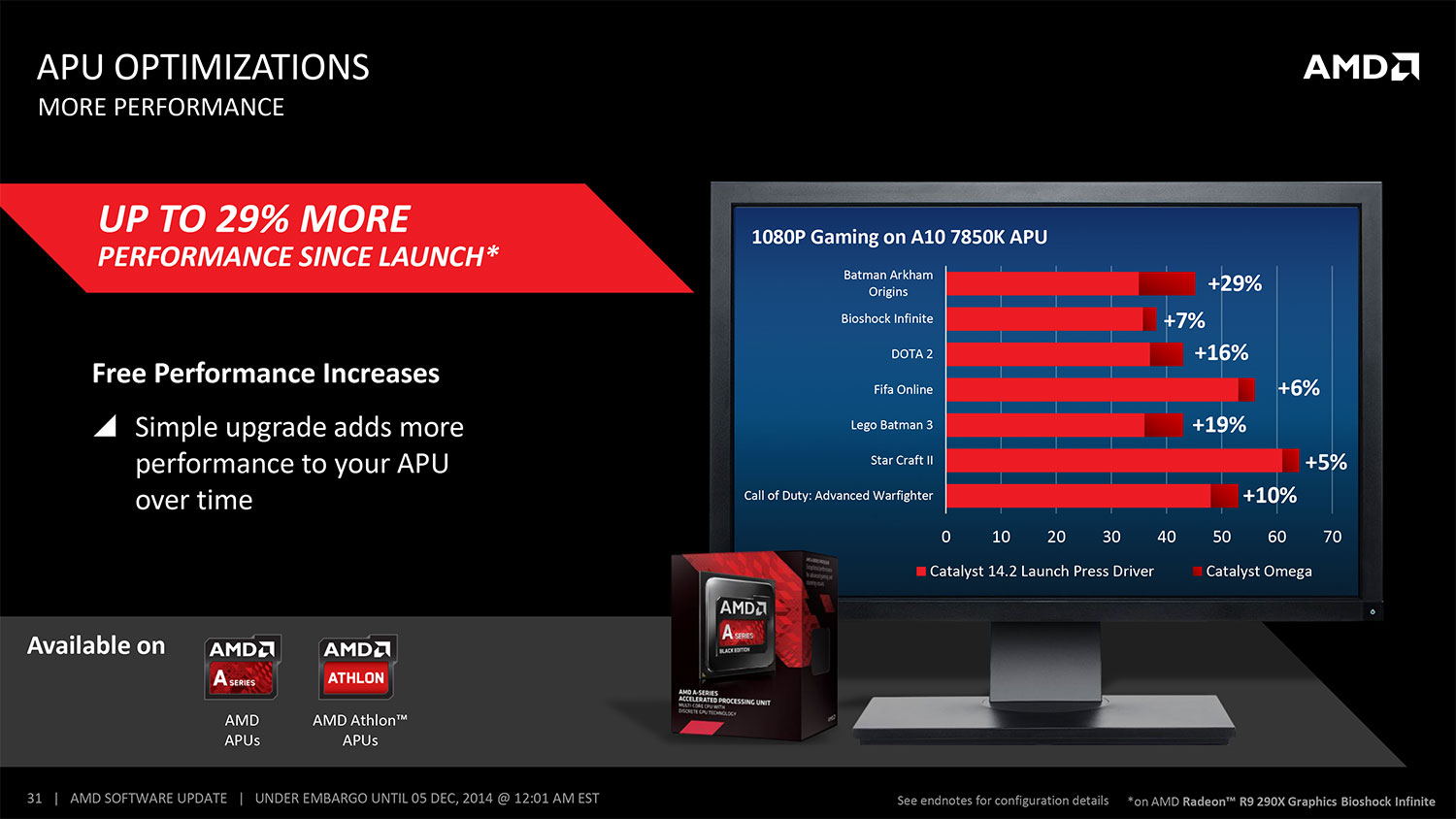 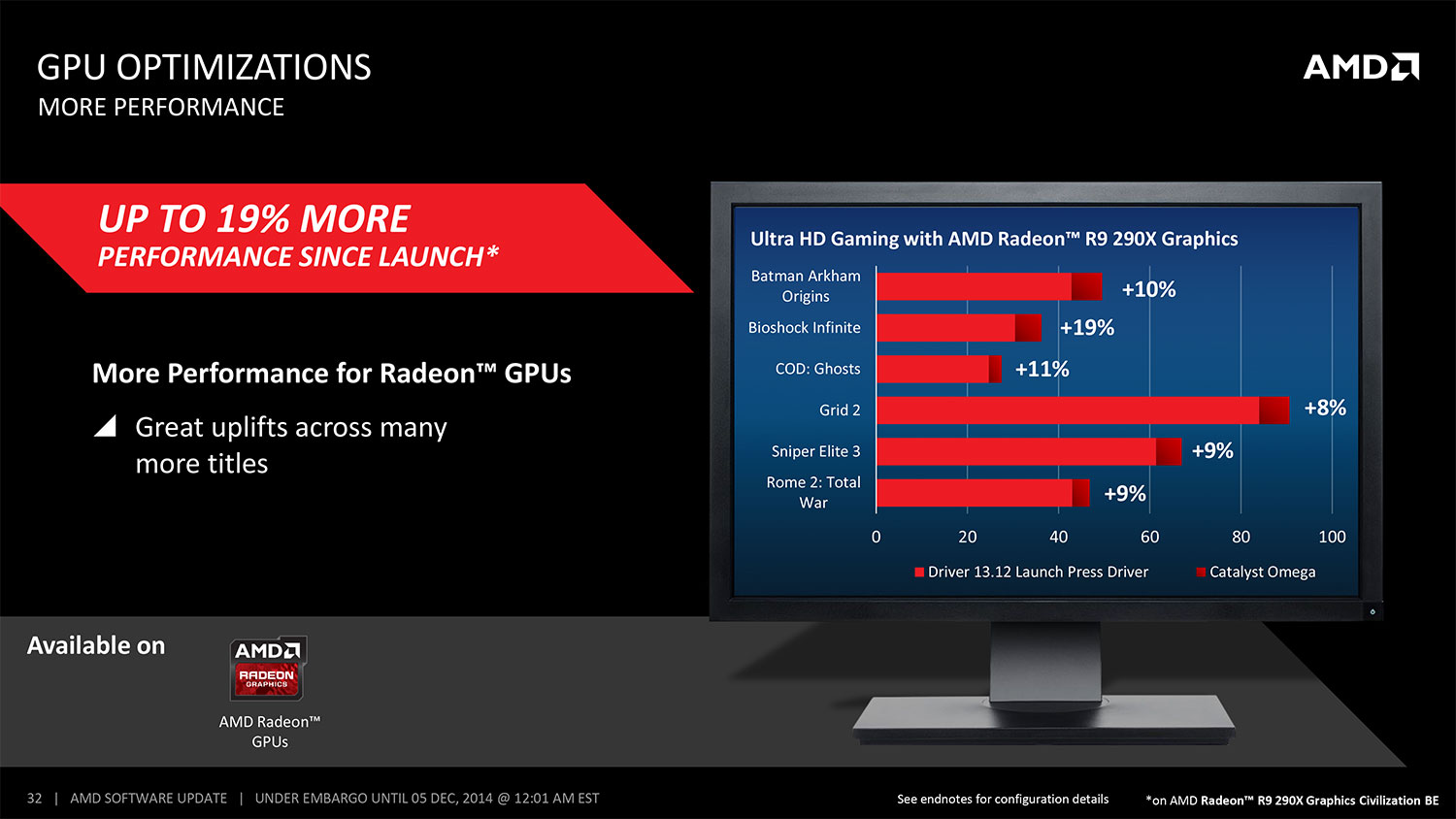 These two slides show performance improvements on the A10-7850K APU and Radeon R9 290X, but keep in mind that they are not comparing Catalyst Omega to the most recent Catalyst beta driver, but instead to the launch driver for each component. For the APU that would be 14.2 and for the R9 290X that is 13.12 – so what you are seeing is year over year performance improvements. These are good – Bioshock Infinite claims 19% and Call of Duty: Ghosts 11% – but consider a 12-month cycle has taken place, most users won't see these as earth shattering as AMD might want us to.

AMD did harness the power of its community (and the AMD Red Team) to get a list of bugs to fix and features to add. While we discussed the feature additions on the previous page, there is a sizeable list of bugs that were addressed and squashed with the Omega release today. 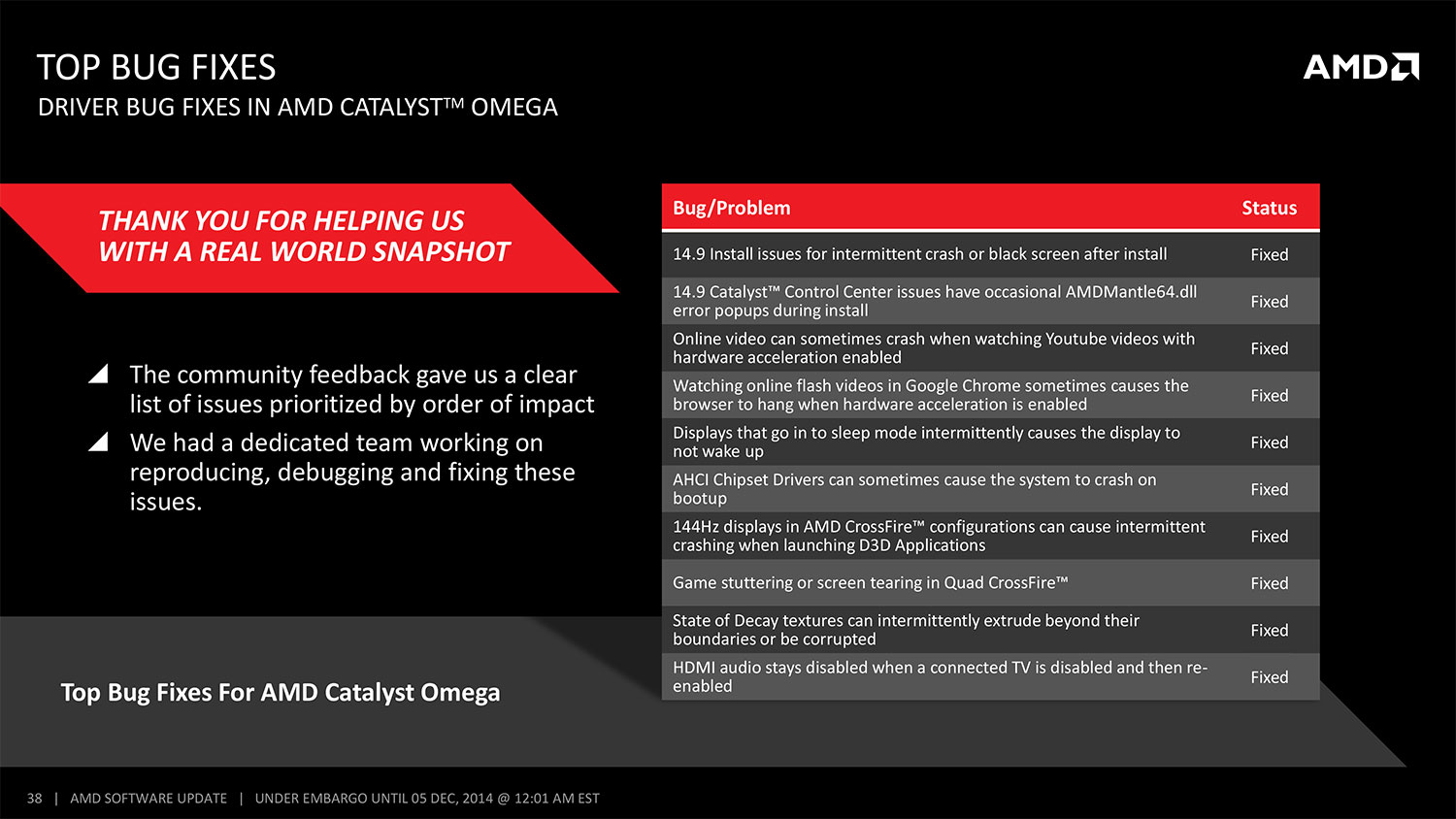 This list is the "top 10" that AMD addressed – the ten most requested fixes. It includes some incredibly specific (but still equally annoying to those affected) bugs like "AHCI chipset drivers causing crash on boot." Others like the HDMI audio staying disabled during a disconnect/reconnect cycle are likely to help users that didn't even know they had a problem – and that's how software QA should work!

I am very interested to test and play with a dual R9 295X2 setup to test and validate AMD's claims of "fixed" stuttering and screen tearing when using a Quad CrossFire configuration. That seems like an incredibly difficult problem and I would have assumed AMD would make a much larger deal of it were the difference found to be very dramatic. 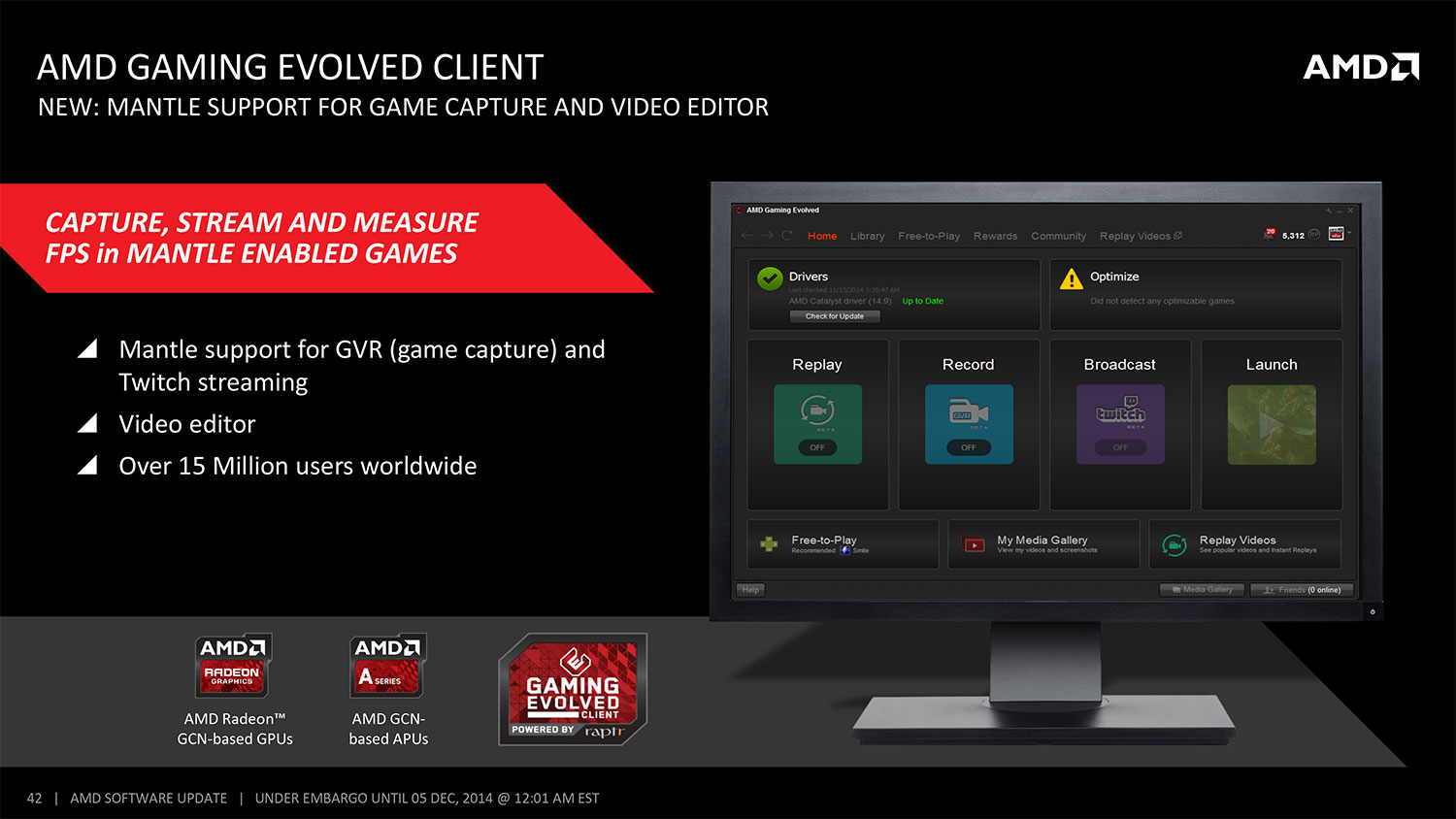 The Catalyst Omega driver also introduces a new Gaming Evolved Client, software that is powered by Raptr. Updates now allow it to support game capture and Twitch streaming with Mantle titles as well as to offer up frame rate monitoring for Mantle games. It's great to see integrated support for AMD's own custom API finally make it into their software but that last point is even more interesting for me – can we finally find a way to measure performance of Mantle-based games accurately? We'll soon see. 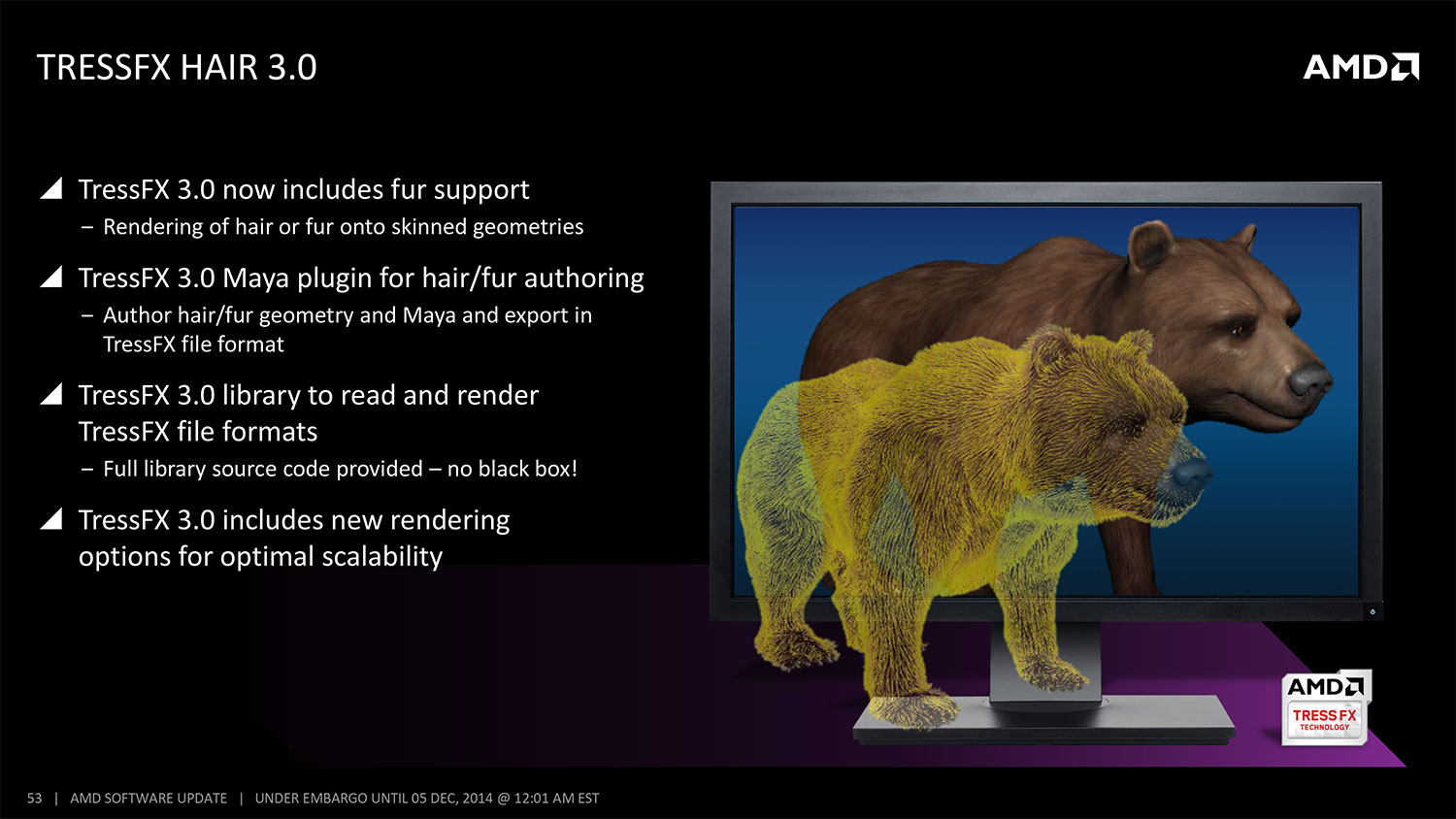 A new iteration of TressFX is supported with this driver (and is now available to developers) that adds support for hair applied to textured geometry. This allows TressFX to support fur on animals. AMD says there are plenty of optimization and performance improvements in TressFX version 3.0 as well and developers will find the Maya plugin useful. 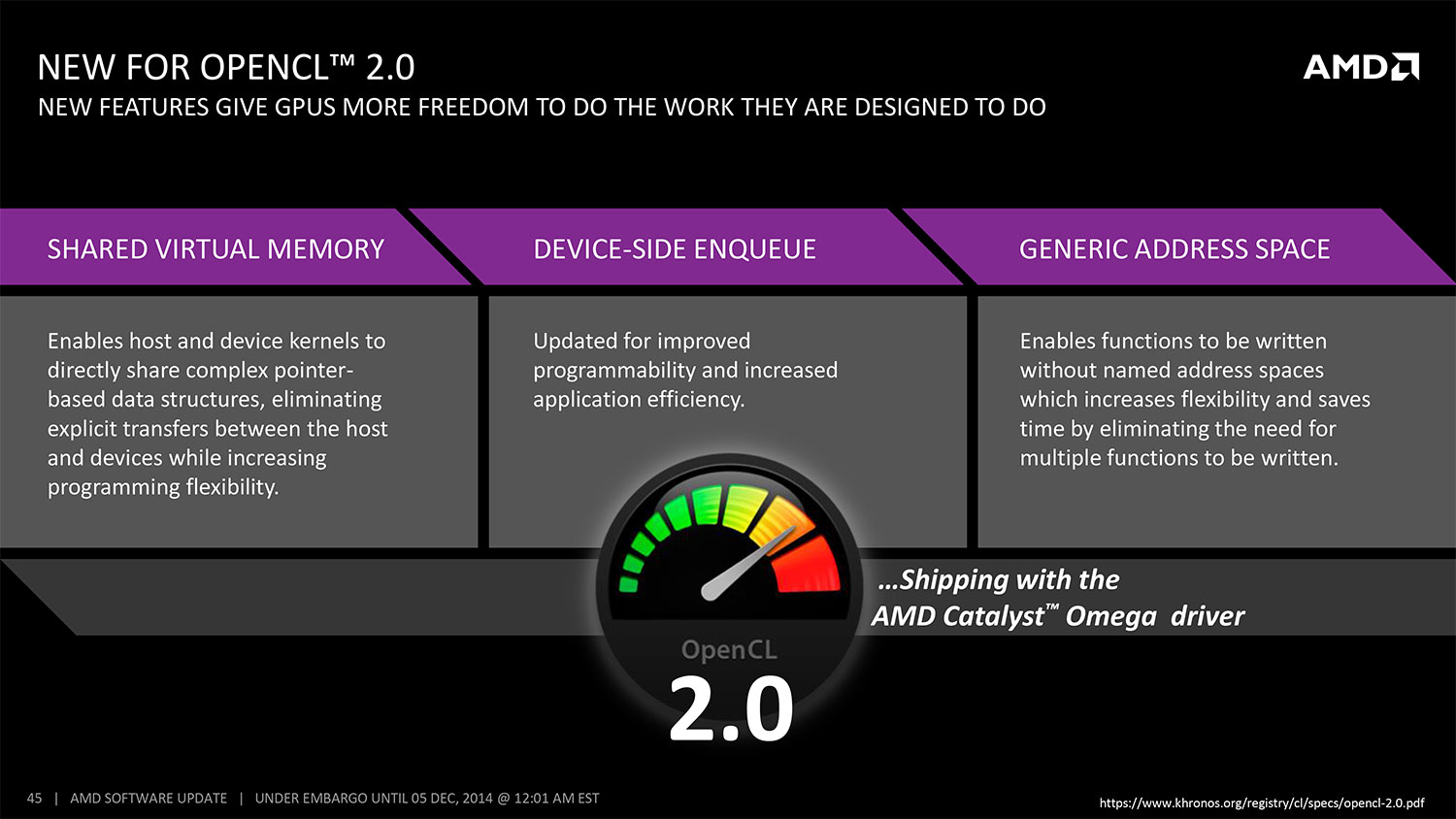 It is clear that AMD has put a lot of effort into the Catalyst Omega driver and it is equally clear that they wanted and needed the word to get out about it. As I mentioned on the first page, NVIDIA is received as being the company with the better driver and feature support for GeForce customers and AMD has always fallen behind. By increasing the company's emphasis on software (with a new CEO and management structure) the Catalyst team is hoping to finally get the resources necessary to turn that around. This first "special edition" driver is an incredible first step and definitely makes the case that AMD is serious about Catalyst and how the company is perceived by the community.

Is it enough though? Though AMD was bragging about the 441,000 automated tests and 11,000 manual tests, I don't really have comparable data from NVIDIA. NVIDIA seemed unwilling to share it on short notice, but NVIDIA has a strong record of releasing frequent WHQL-certified drivers and that inherently requires more stringent testing than beta drivers. NVIDIA claimed that it has been doing global testing on software for years, something that AMD is just starting with the release of Omega. Global testing allows for a triple-work-day bug squashing capability if managed correctly.

I think the direction AMD is taking with Catalyst Omega is perfect – the company just needs to be sure to iterate on the process. It was already stated that AMD was planning on doing a release like this once a year – and in my mind that might be too long of a refractory period. If Radeon users continue to find bugs and NVIDIA continues to offer newer features in the next 3-6 months, then the effect of Omega could be lost well before next December when we get Catalyst Psi (or whatever they call it).

But it's clear that AMD needs this; they need to make sure the community knows it stands behind its hardware with a quality software solution.