Asus fills a big hole in its FM2+ lineup.

I have been impressed by the Asus ROG boards for quite a few years now.  I believe my first encounter was with the Crosshair IV Formula, followed by the CH IV Extreme with that crazy Lucidlogix controller.  These were really outstanding boards at the time, even if one was completely overkill (and not terribly useful for multi-GPU via Lucidlogix).  Build quality, component selections, stability, and top notch features have defined these ROG products.  The Intel side is just as good, if not better, in that they have a wider selection of boards under the ROG flag.

Asus has had a fairly large hole in their offerings that had not been addressed until fairly recently.  The latest AMD APUs based on FM1, FM2, and FM2+ did not have their own ROG member.  This was fixed in late summer of this year.  Asus released the interestingly named Crossblade Ranger FM2+ motherboard for the AMD APU market.

FM2+ motherboards are, as a rule, fairly inexpensive products.  The FM2+ infrastructure does not have to support processors with the 219 watt TDPs that AM3+ does, instead all of the FM2+ based products are 100 watts TDP and below.  There are many examples of barebones motherboards for FM2+ that are $80 and less.  We have a smattering of higher end motherboards from guys like Gigabyte and MSI, but these are hitting max prices of $110 to $120 US.  Asus is offering users in the FM2+ market something a little different from the rest.  Users who purchase an AMD APU will be getting much the same overall experience that the top end Intel based ROG customers if they decide to buy the Crossblade Ranger, but for a much lower price. 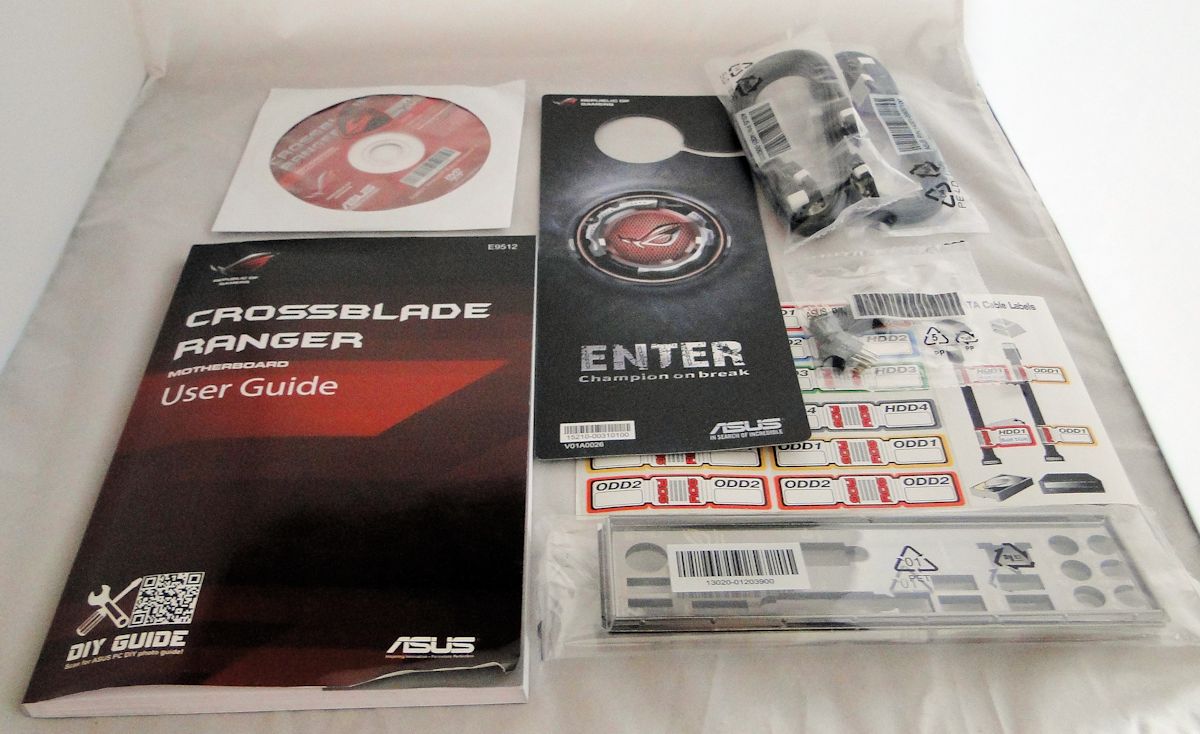 The bundle is functional, but not overly impressive.

Asus has one of the strongest reputations in the motherboard business.  While others will argue that based on personal experiences with problematic motherboards, the general consensus is that Asus does a pretty good job.  They lead the market in sales followed by Gigabyte and MSI.  The Crossblade Ranger features many of the hallmarks that define the Asus motherboard experience.  This board is simply packed with features.

The use of higher end components such as the 10K Black Metallic Caps, over current protection for ports and DIMM slots, as well as more extensive electrostatic protection for the commonly used ports set this board apart from others in its class.  The chokes are the solid, pressed units with slightly better heat dissipation due to the design of the covering plus the elimination of coil whine.  It also features the TI NexFET MOSFET chips to deliver power to the CPU.

Did I mention a FREE MOUSEPAD!?

The power delivery system is the full 6+2 setup that is the higher end option for FM2+ processors.  This is branded the Extreme Engine Digi+ III.  Quite a mouthful for what is essentially a digitally controlled power delivery system for an APU that will run at max some 100 watts TDP (the newer Kaveri desktop APU maxes out at 95 watts).  Future AMD APUs will likely go below that, and we have heard rumors that Carrizo may have a max TDP of some 65 watts on the desktop.  The design looks solid, and the heatsinks covering up these VRMs are substantial.  Heat will not be an issue with this board, even when overclocked.

The memory subsystem is spec’d to go up to DDR-3 2666 speeds, though this is overclocked.  The latest AMD APUs can hit DDR-3 2400 speeds natively.  This gives a little extra headroom for tweaking.  There are two PEG slots that are rated up to PCI-E 3.0 speeds, and these can be used in CrossFire applications.  If two video cards are installed then they both become PCI-E 3.0 x8 connections.  The board is not licensed for SLI from NVIDIA.  There is a third PEG slot that can be utilized for 3 way CrossFire, but it is only a x4 unit and routes the PCI-E lanes from the southbridge.  It really would not be a great option for such an implementation.

The board features a total of 6 USB 3.0 ports.  Four of these are powered by the native controller in the AMD A88X southbridge.  The other two are provided by the ASMedia controller.  The AMD controller powers one set of rear ports as well as the front panel USB 3.0 connection.  The ASMedia controller supports UASP, which in theory should improve overall throughput in data reads and writes.  There are also another 8 available USB 2.0 ports, two of which are located on the back and six on the board via plugs. 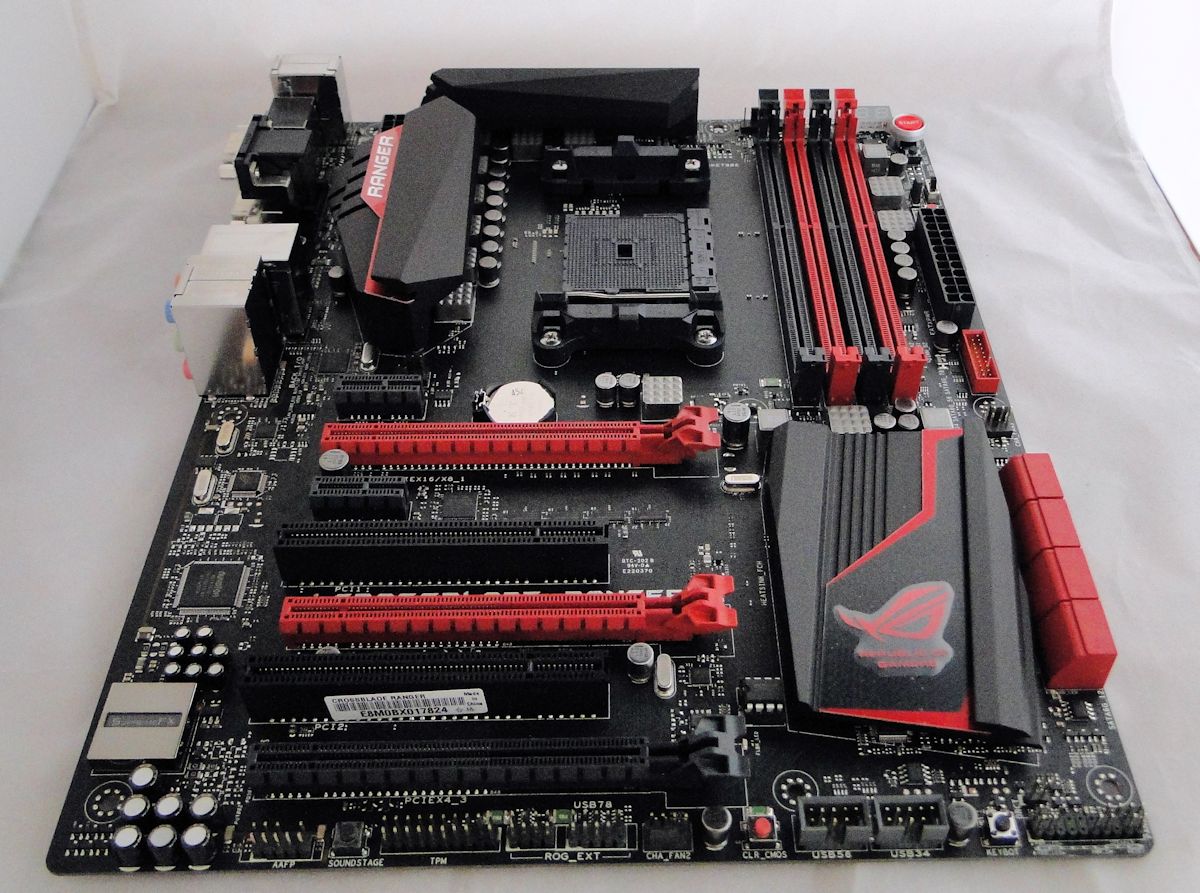 The board features an outstanding layout for multi-GPU setups.  So odd to see two PCI slots.

The AMD A88X chipset natively supports up to 8 SATA-6G connections.  These can be configured to RAID 0, 1, 5, and 10.  AMD’s SATA-6G performance is not as good overall as what Intel offers with the latest Z97 chipset, but it is very close.  Asus makes a wise choice and does not offer e-SATA ports.  I have been in the business a long time and I have yet to utilize e-SATA.

The rear panel sports a single PS/2 connection as well as the two aforementioned USB 2.0 ports.  It has the four USB 3.0 ports, a single optical S/PDIF connection, and the USB BIOS Flashback button.  Video outputs are covered by a single d-sub, a dual link DVI, and a HDMI 1.4 connection.  There is no DisplayPort option on this particular board.  Finally we have the Ethernet port and the 8 channel audio outputs.