More about the Crossblade Ranger

Asus has leaned upon the Intel Gig-E controller and combined it with their GameFirst III software to do QoS work on the packets.  There is a bit more to it than just that.  Ethernet ports are typically the most common point of failure on motherboards due to electrostatic discharge.  Plugging in and out a network cable and not being grounded can lead to a surge heading into the port.  Asus has designed in ESD guards to help lower the likelihood of destroying the onboard Ethernet with a zap of electricity generated by a user’s socks on carpet.  The GameFirst III program not only can provide QoS, but it can graphically display network usage and information.  It also has a built-in bandwidth test to see where potential bottlenecks will lay. 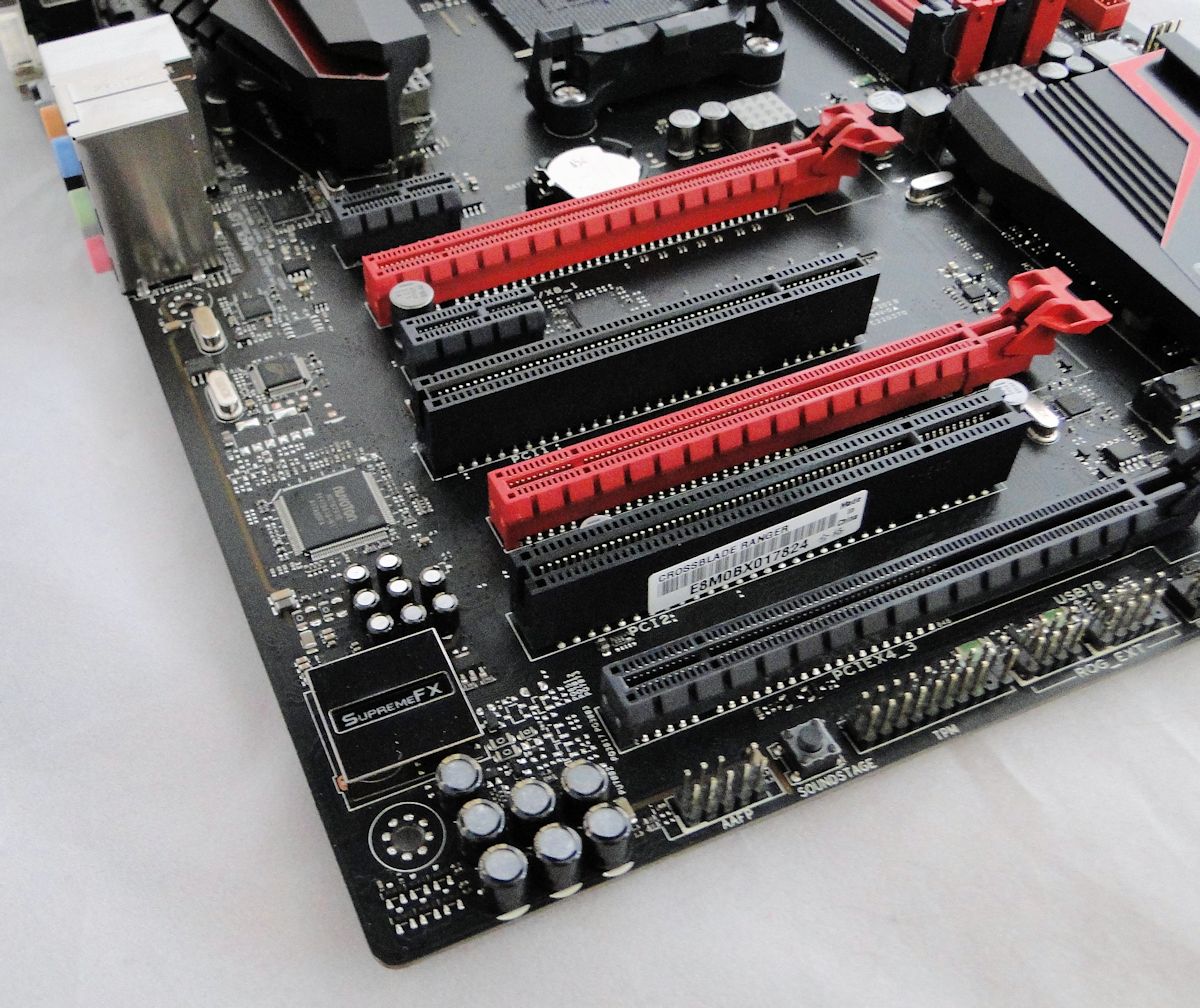 The audio portion looks pretty sharp and functional.  When running it has the red line where the PCB is isolated.

The board has a multitude of buttons throughout that allows users to more directly control many of the functions.  There is a start and reset buttons, the MemOK! button that retards memory timings in case of boot issues, the KeyBot button (a really handy keyboard macro setup program that has gotten rave reviews), the Clear CMOS button, and finally the Sonic SoundStage button.  The SoundStage button cycles through four distinct audio presets which are aimed at different gaming types (FPS, racing, etc.).  Users will have to try the different settings to see if it is to their liking.  I just find it fascinating that Asus would put in a special button just for that functionality.

Monitoring the board is a bit easier with the Q-Code LED display which provides boot and error notifications.  Asus also includes “Probelt” voltage monitoring points for the CPU, memory, and PCI-E connections.  Right next to the Probelt connections are the last two dipswitches that users will likely ever see.  These control the LN2 mode and the Slow Mode settings for the motherboard. 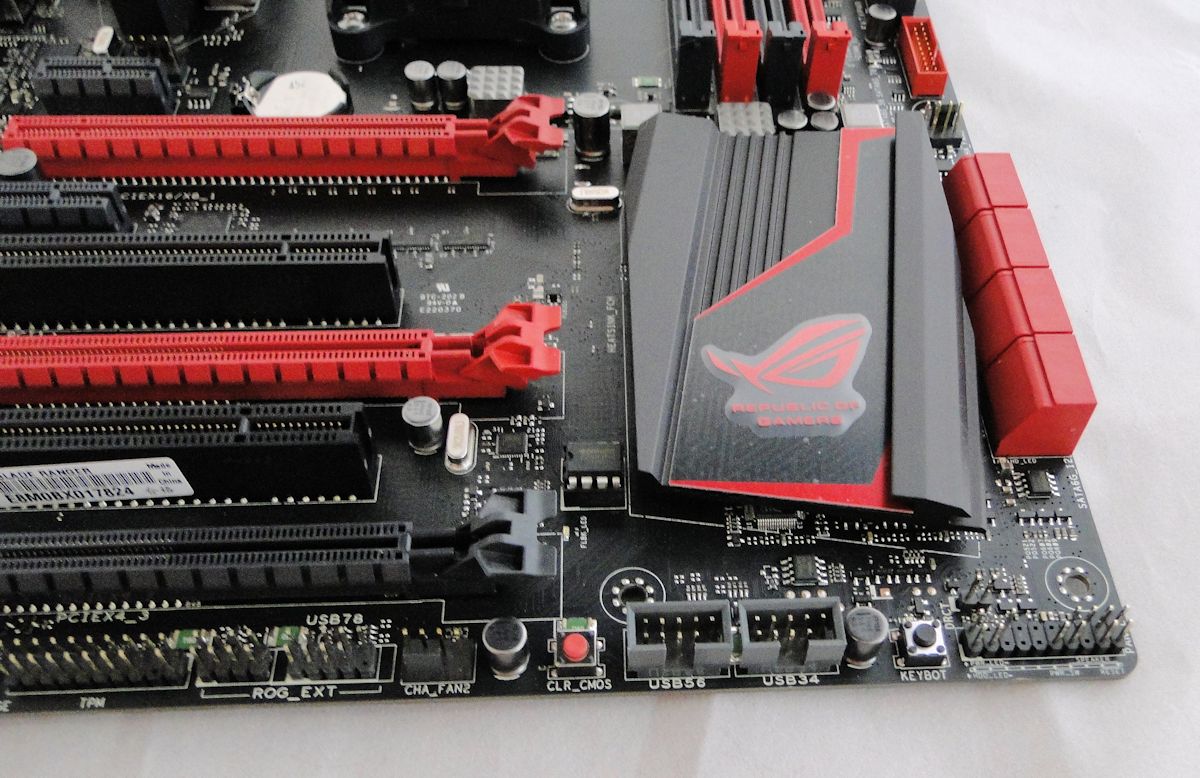 The lower connections are all nicely laid out in a way that results in fairly minimal cable clutter.

The area that looks to have gotten the most attention is of course the audio portion.  It seems that everyone has up rated audio functionality as compared to years past.  I believe that Asus was one of the first to really push this with their ROG boards some years back.  This board has the latest generation of Asus enhancements.  It starts off with the physical isolation of the audio components from the rest of the PCB.  Asus claims it uses the ROG SupremeFX 8-Channel HD Audio CODEC, but does not specify an actual part number.  This looks to be one of the latest Realtek CODECs instead of something more exotic.

The CODEC is of course covered by a stainless-steel, black nickel EMI cover.  Hard to say if this actually provides a cleaner sound, but it certainly will not hurt.  High end capacitors provided by ELNA again work to clean up the signal as well as provide enough power to handle even the most extreme source material (less likelihood of clipping).  The 8-channel audio connectors are all gold plated to improve connectivity and wear.  Asus also includes their Sonic SenseAmp which can determine the resistance of the headphones and adjust the level of amplification.  It correctly identified my Grado SR225e headphones as a sub 35 Ohm set of headphones.  Users can adjust the amount of amplification with the SupremeFX software if they feel the headphones are too quiet with the default amplification applied.  This amplifier only works with the front panel connection and not with the rear.

I had mentioned above the Sonic SoundStage button on the board and how it changes the settings to give a different audio experience depending on the game type.  These changes can be made in software as well.  Unless a user has an open case, it is highly unlikely they are going to reach in there to change the SoundStage settings via the button. 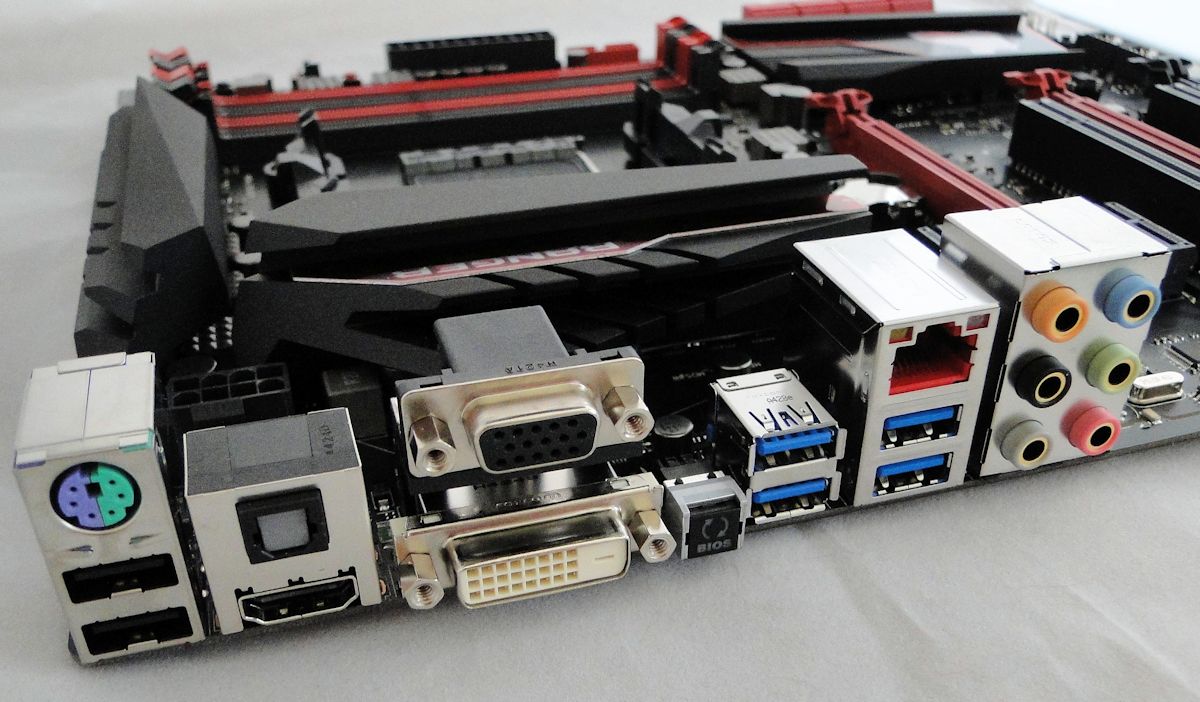 There is a nice selection of ports here, except for of course the lack of DisplayPort.

The software that Asus bundles with their audio portion is pretty impressive.  The Sonic Studio software allows users to further tweak the sound processing.  Perfect Voice improves voice communication by giving finer grained control over audio input.  Sonic Radar 2.0 is a rather questionable application which gives a “radar overlay” in a game on where sound is coming from.  Remember many years back when Asus provided a driver to see through walls during the original Counter Strike years?  This seems awfully familiar.

The UEFI BIOS is a small adventure unto itself.  This firmware has multiple layers of complexity that can cater to the very beginner to the expert tuner.  The fan profile controls are easy to understand and implement.  The graphs are handy, the information page is in-depth, and the ability to tweak nearly any aspect of the board is great.  Firmware updating is very easy, and Asus has a built-in recovery system that apparently works very nicely in case of a bad flash.  For that, just plug in a USB stick with the correct firmware, plug it into one of the USB 2.0 ports, and hit the USB BIOS Flashback button.  The firmware also includes the auto tuning functionality for an instant overclock. 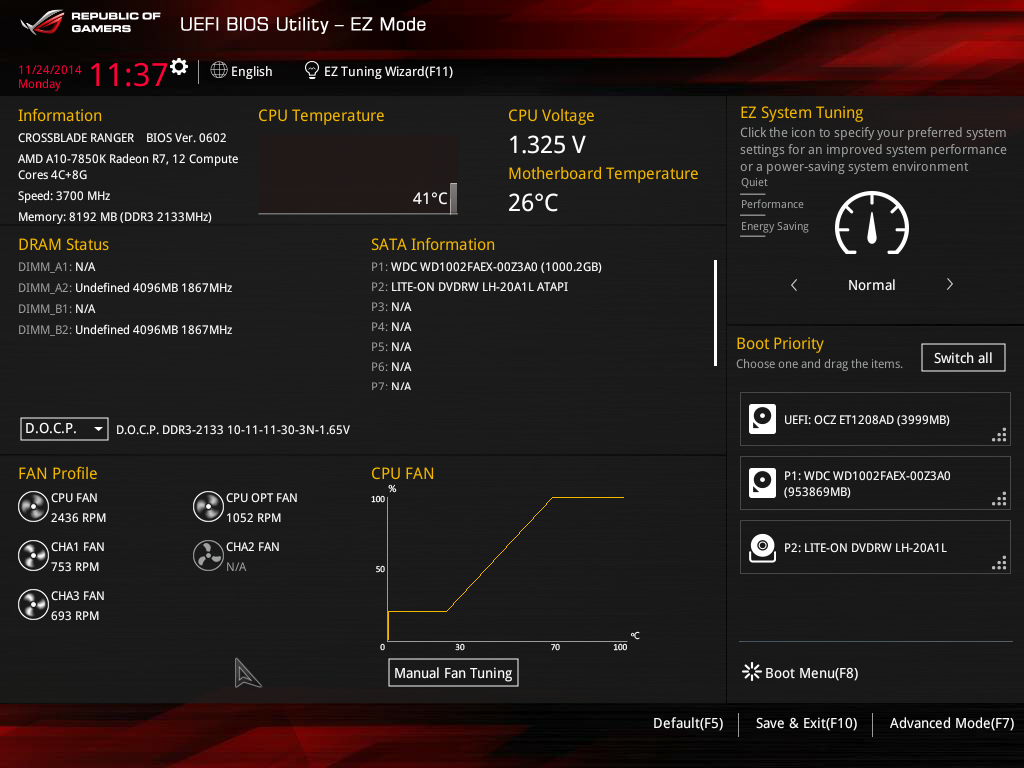 The layout of the UEFI is really nice with a good overview of the health and capabilities of the setup.

Finally we have the AI Suite 3 that comes bundled with a bunch of other software, including a free RAMDisk.  AI Suite is again very full featured and allows users fine grained control over their overclock in a Windows environment.

MSI aims for simplicity with the P55-CD53