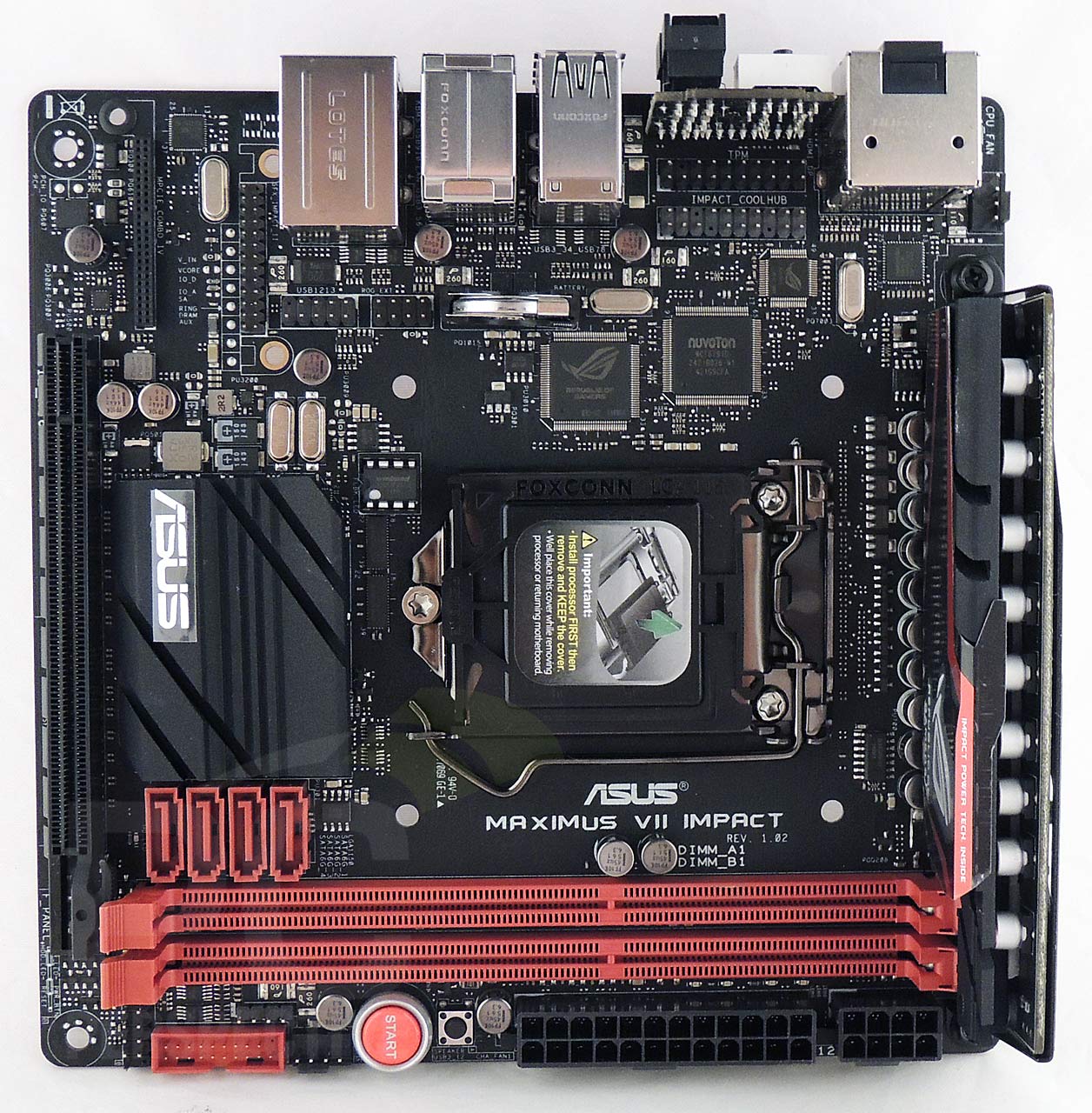 ASUS designed the look of the Maximus VII Impact with the standard ROG-themed red and black coloration. Several of the integrated chipsets and circuity was relocated to the back of the board, allowing for more than adequate room between components. But don't take that statement the wrong way, this board has a whole lot of functionality crammed into its small form factor design. 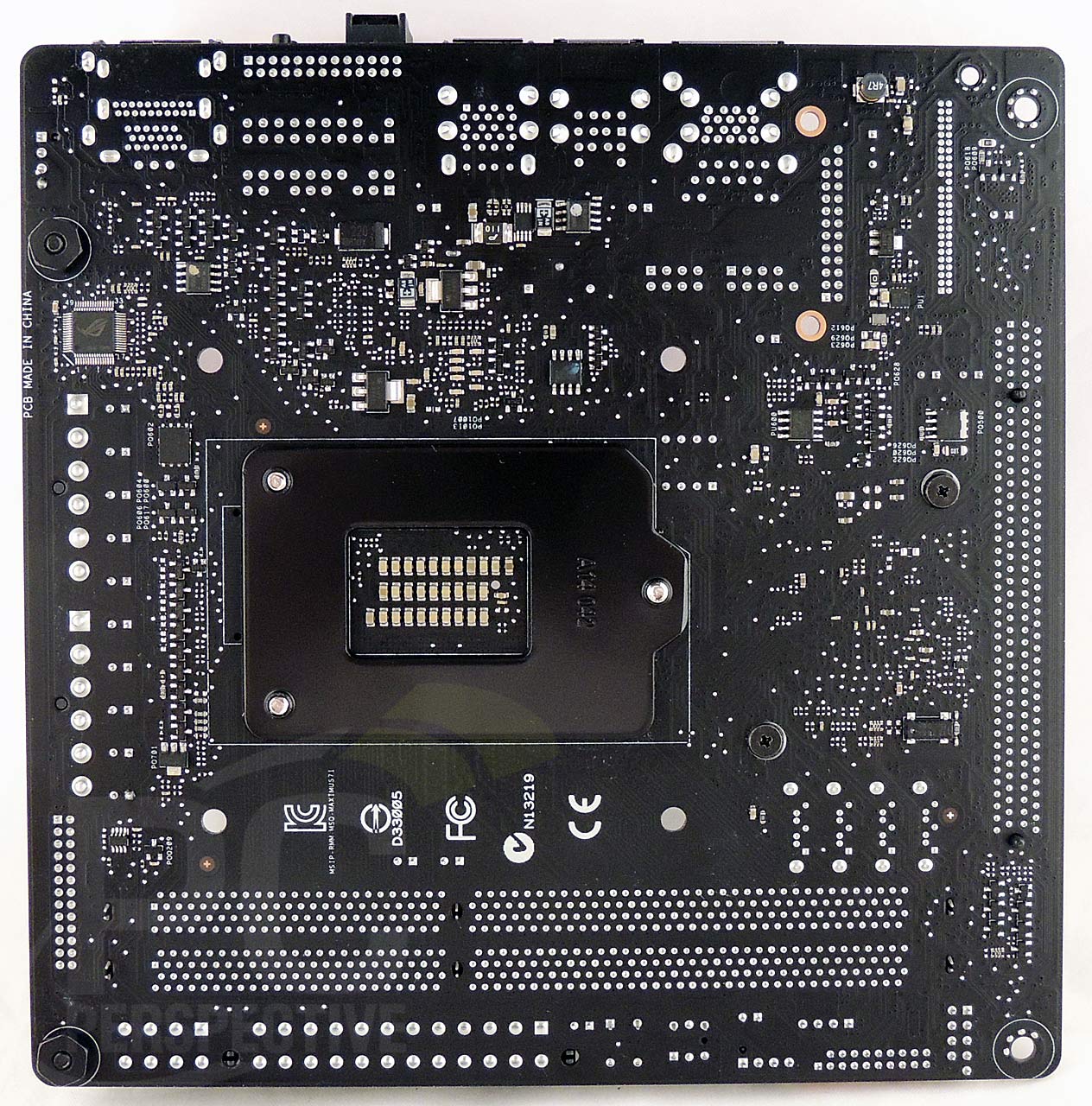 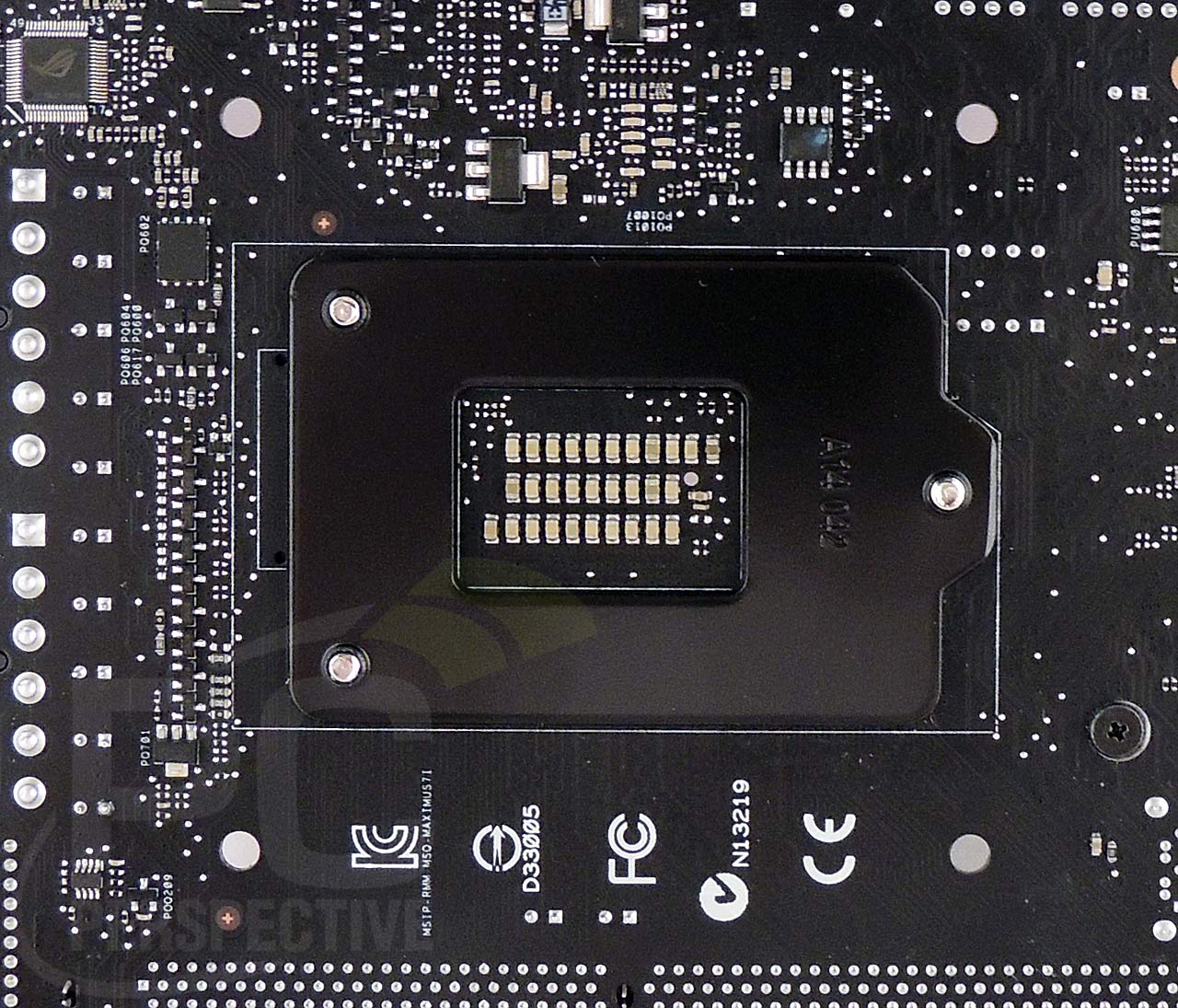 ASUS seemed to put a lot of thought into the placement of components on the backside of the board. However, there are quite a few chips to the top and left of the socket that could risk being damaged or crushed when using specific style backplates for cooler mounting.

The 2-digit diagnostic display can be used for debugging system issues during system initialization. The displayed debug codes can be decoded using the table from the motherboard manual. The KeyBot button activates KeyBot functionality for a keyboard attached to the upper USB 2.0 port (just under the PS/2 port) in the rear panel. The KeyBot LED (to the right of the KeyBot button) also illuminates when the function is active. In conjunction with the KeyBot Windows software, the user to program in-game macros based on programmed key combinations. The Sonic SoundStage button activates preset sound profiles or user created sound profiles for headphones attached to the front panel audio header. The active profile momentarily displays on the debug LED when the button is pressed.

The ROG Connect button can be used to connect the system to a remote system using a dual ended USB cable attached to the lower USB 2.0 port. Once the two systems are connected via USB and the ROG Connect button is pressed, you can change settings on the Maximus VII Impact board from the remote system using the ASUS TweakIt software. You must first install the ASUS TweakIt software on the remote system to change the settings on the Maximus VII Impact board.

The USB BIOS Flashback button can be used to re-flash the BIOS without having to boot the system into the UEFI BIOS interface or DOS. Simply plug in a USB drive containing the proper BIOS file in the root of the drive into the bottom USB 2.0 port (underneath the PS/2 port) and press the button for 3 seconds until the integrated LED begins to flash. As the BIOS is updated, the LED flashing frequency increases. Once the LED goes out, the flash operation is completed and the board can be booted. Note that if the BIOS Flashback LED flashes for 5 seconds and then glows solid, it means that something went wrong with the flashback operation. Check the USB drive for the the BIOS file in the root and make sure that the BIOS file is named correctly. BIOS Flashback looks for a specific filename and file format when attempting to replace the on-board BIOS. According to the user manual, the BIOS file in the root of the flash drive must be named M7I.CAP for the BIOS Flashback applet to successfully re-flash the board's BIOS.

The Maximus VII Impact motherboard comes with a single PCI-Expess x16 device port, offering full x16 bandwidth with a single card populated. The Intel Z97 chipset is located to the right of the PCIe x16 slot, covered by a low profile heat sink to minimize interface with PCIe card seating. The heatsink is matte black in color with the ASUS logo in its upper left corner. 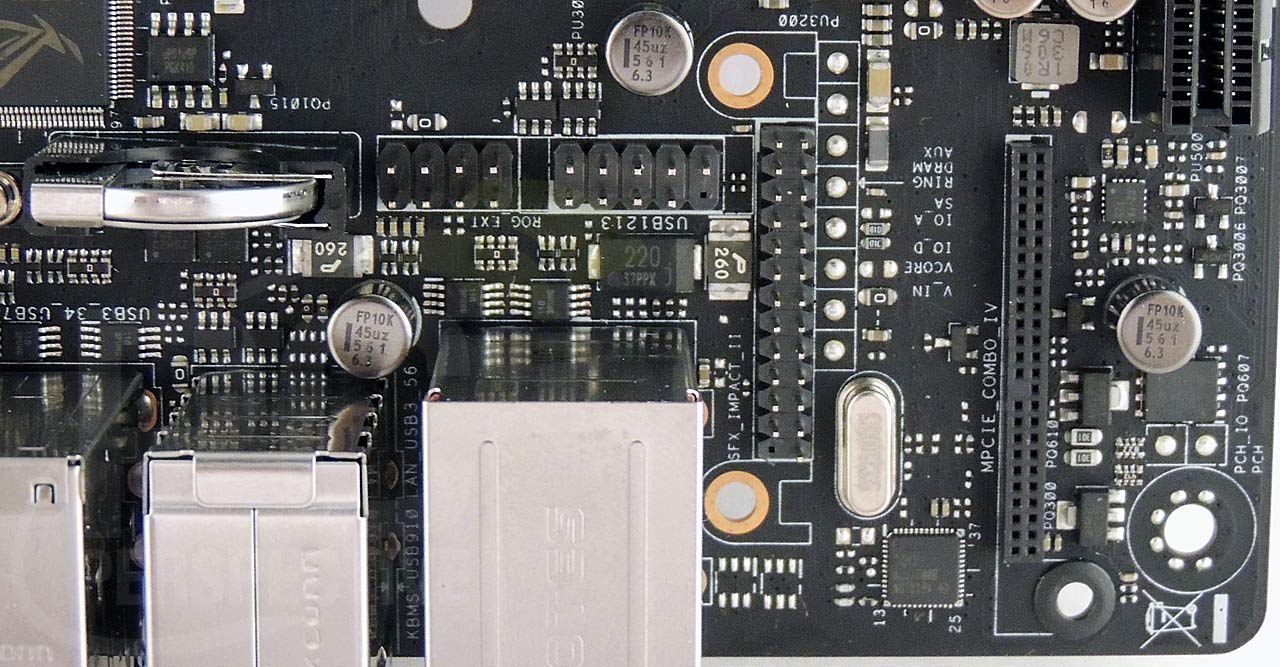 In the upper left corner of the board are the mPCIe slot for the ASUS Combo IV card, the SupremeFX Impact II audio card socket, the Probelt voltage measurement points, a USB 2.0 header, the OC Panel headers (labeled ROG_EXT), and the CMOS battery. The Probelt voltage measurement points allow for direct board voltage measurement using a volt meter. The OC Panel cable connects to the ROG_EXT port and the USB 2.0 port to its left, allowing the optional ROG OC Panel device to interact with the board. The CMOS battery is placed vertically to minimize the space footprint of the holder. 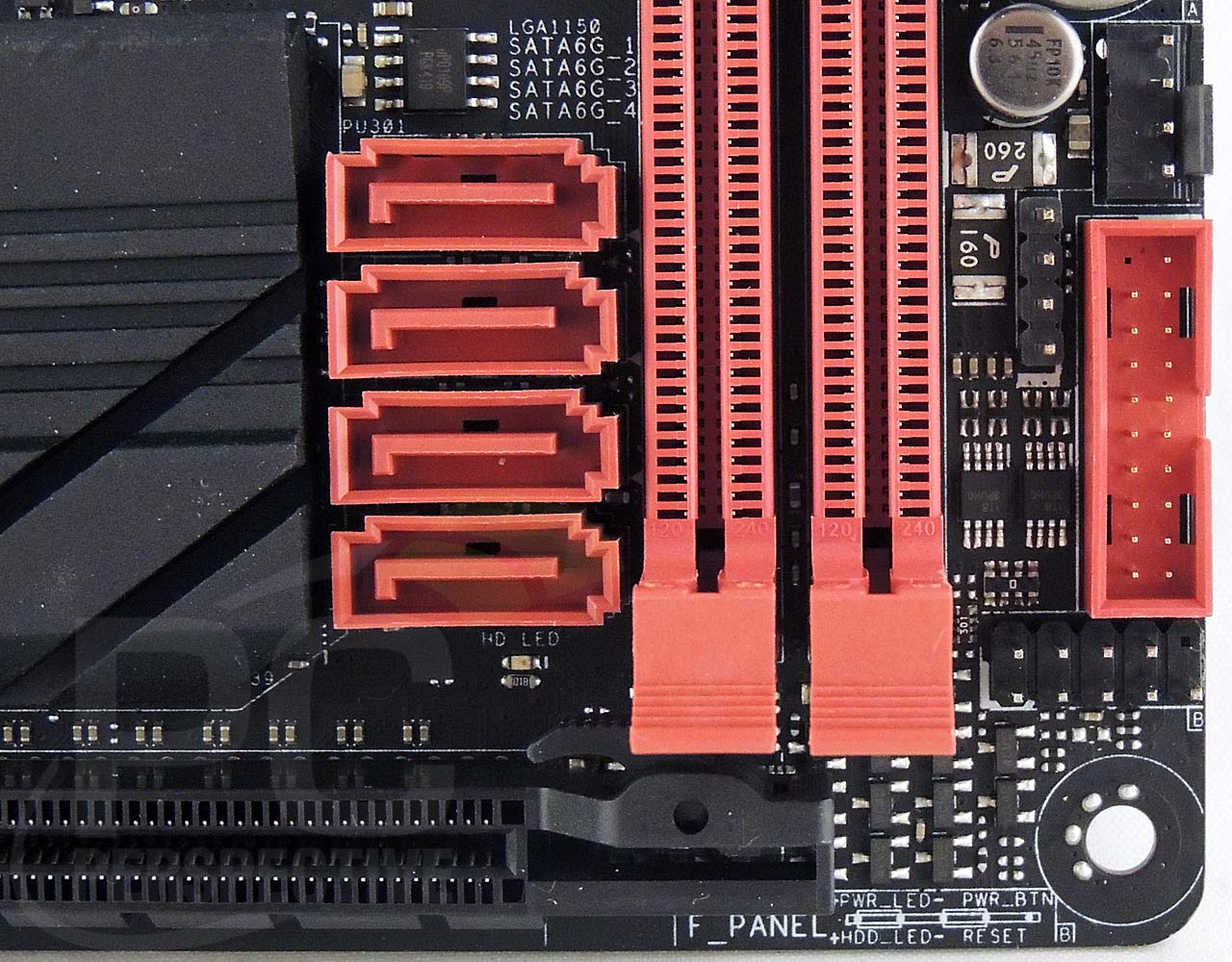 The board comes standard with four SATA III port, located to the lower right of the PCIe slot in between the chipset and memory slots. The slots may be hard to get to with memory and a video card seated in the board, so component plug-in order becomes critical.

The two integrated DDR3 memory slots are located just below the CPU socket. The board supports up to 16GB of memory running at a maximum speed of 3300MHz. Note that memory speeds above 1600MHz are considered overclocked speeds and are outside of the official Intel stock memory speed specifications. 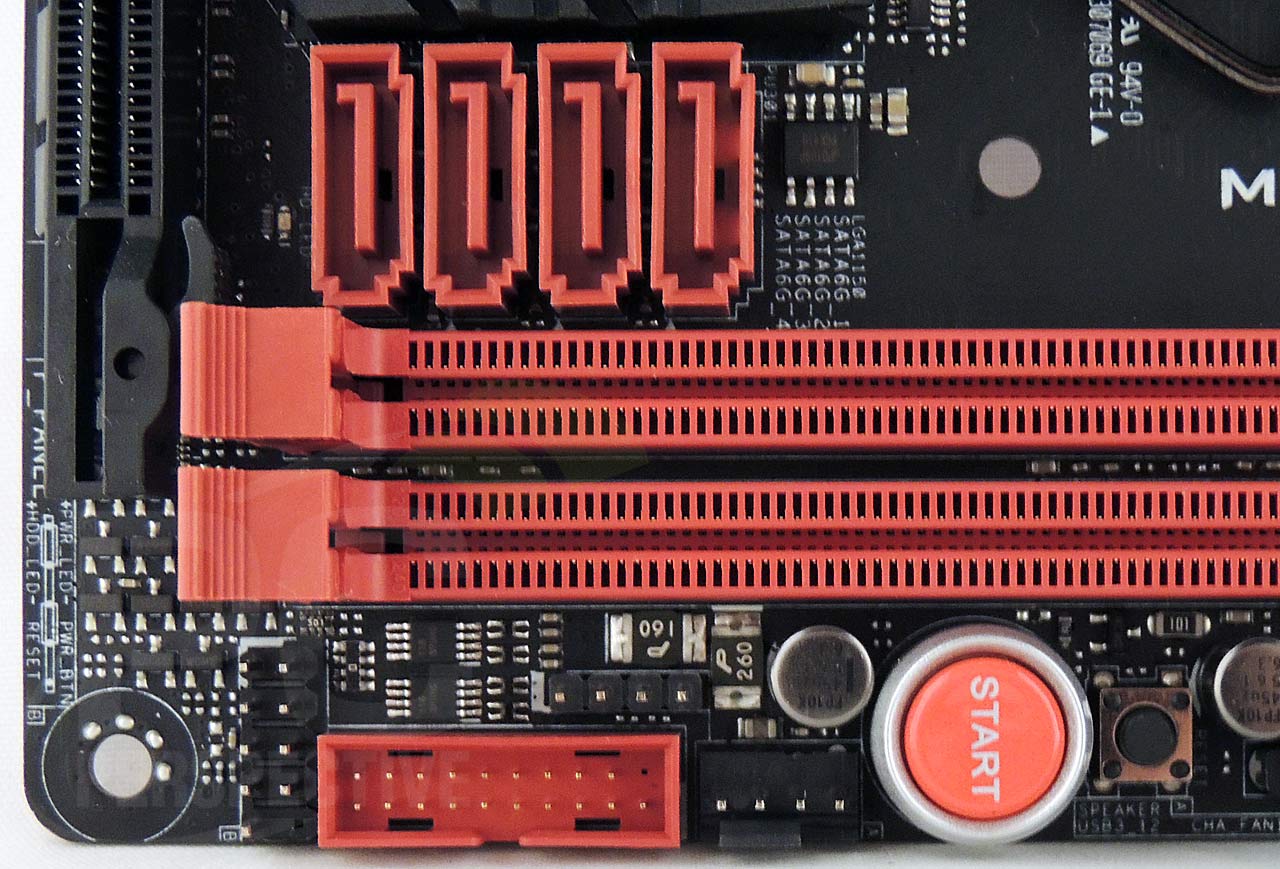 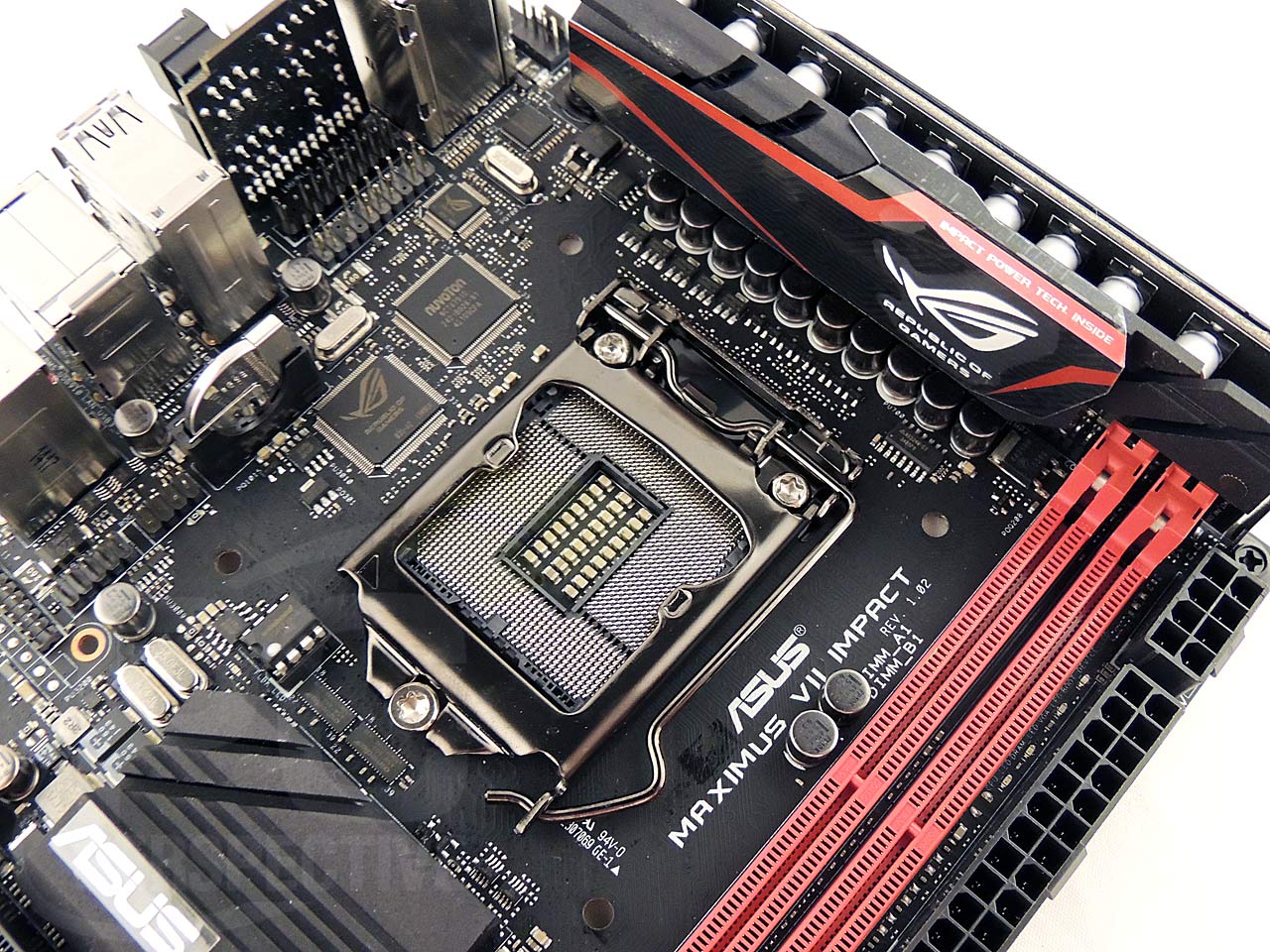 The daughter board to the right of the CPU socket houses all power circuitry for the CPU, including its 8+2 digital power phases, the NexFET MOSFETS, the 60A BlackWing chokes, and 10A black metallic capacitors. ASUS covered the front and back of the daughter card with black aluminum heat sinks for protection and cooling purposes. Notice that the capacitors for the daughter board sit in a line directly under the front sink. 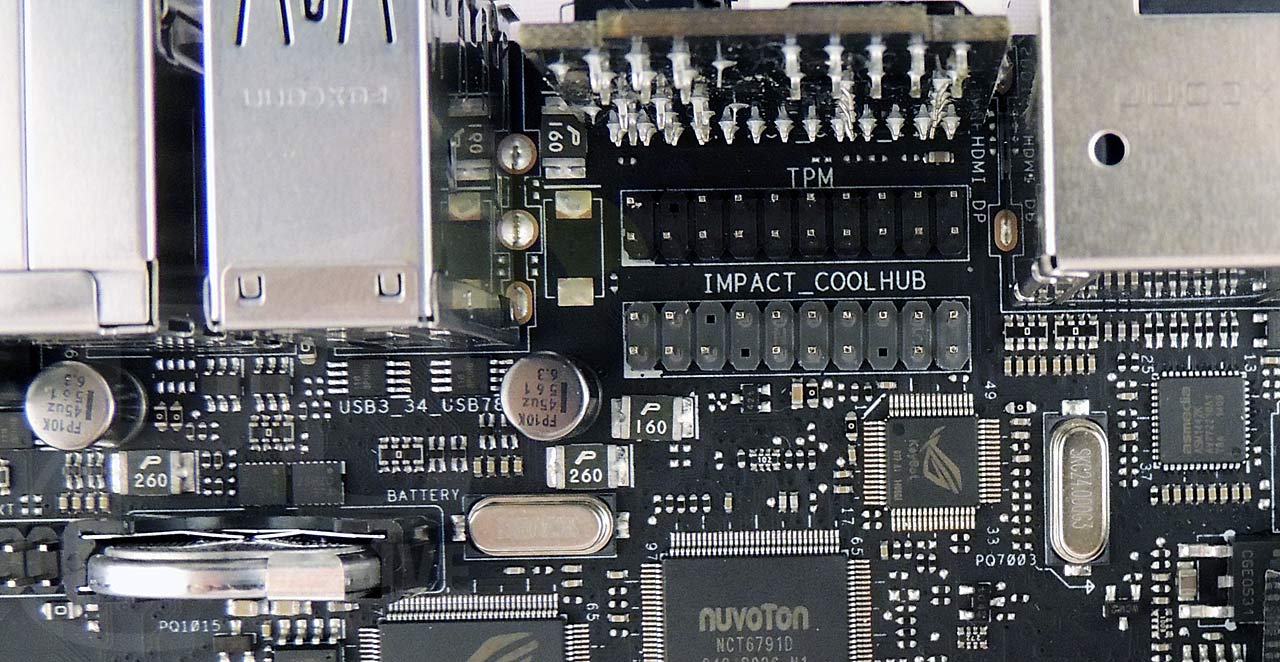 Directly above the CPU socket are the trusted module header and the Impact CoolHub header. The Impact CoolHub card plugs into the header, adding fan headers and LN2-related jumpers to the board. 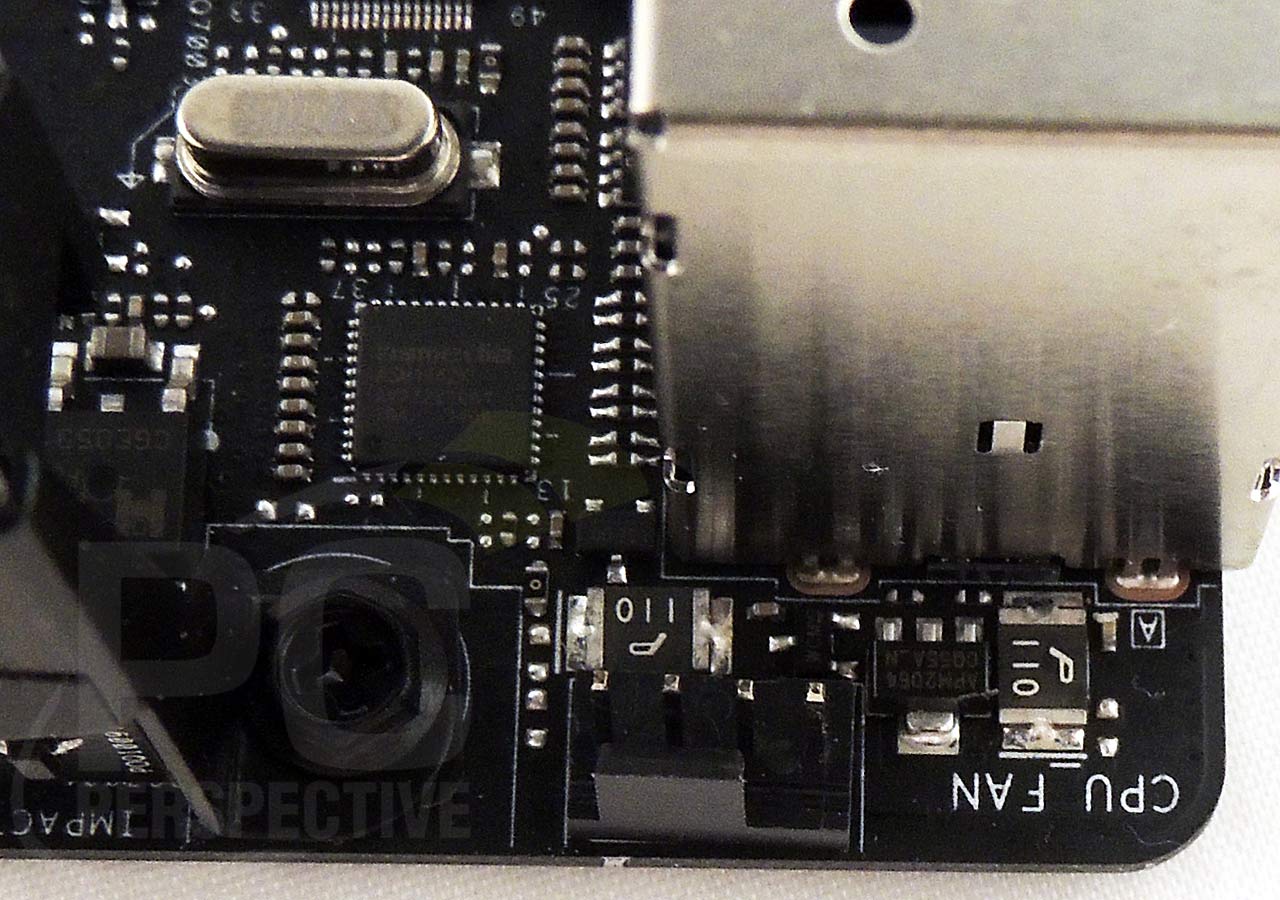 To the upper left of the CPU socket in the 4-pin CPU fan header.