Jim from Tekrevue stops by to discuss the building and configuration of the ultimate Plex Media Server!

If you’re a fan of digital video and music, you’ve likely heard the name “Plex” floating around. Plex (not to be confused with EVE Online’s in-game subscription commodity) is free media center software that lets users manage and stream a wide array of videos, audio files, and pictures to virtually any computer and a growing number of mobile devices and electronics. As a Plex user from the very beginning, I’ve seen the software change and evolve over the years into the versatile and powerful service it is today.

My goal with this article twofold. First, as an avid Plex user, I’d like to introduce the software to users have yet to hear about or try it. Second, for those already using or experimenting with Plex, I hope that I can provide some “best practices” when it comes to configuring your servers, managing your media, or just using the software in general.

Before we dive into the technical aspects of Plex, let’s look at a brief overview of the software’s history and the main components that comprise the Plex ecosystem today.

Although now widely supported on a range of platforms, Plex was born in early 2008 as an OS X fork of the Xbox Media Center project (XBMC). Lovingly named “OSXBMC” (get it?) by its creators, the software was initially a simple media player for Mac, with roughly the same capabilities as the XBMC project from which it was derived. (Note: XBMC changed its name to “Kodi” in August, although you’ll still find plenty of people referring to the software by its original name).

A few months into the project, the OSXBMC team decided to change the name to “Plex” and things really started to take off for the nascent media software. Unlike the XBMC/Kodi community, which focused its efforts primarily on the playback client, the Plex team decided to bifurcate the project with two distinct components: a dedicated media server and a dedicated playback client. 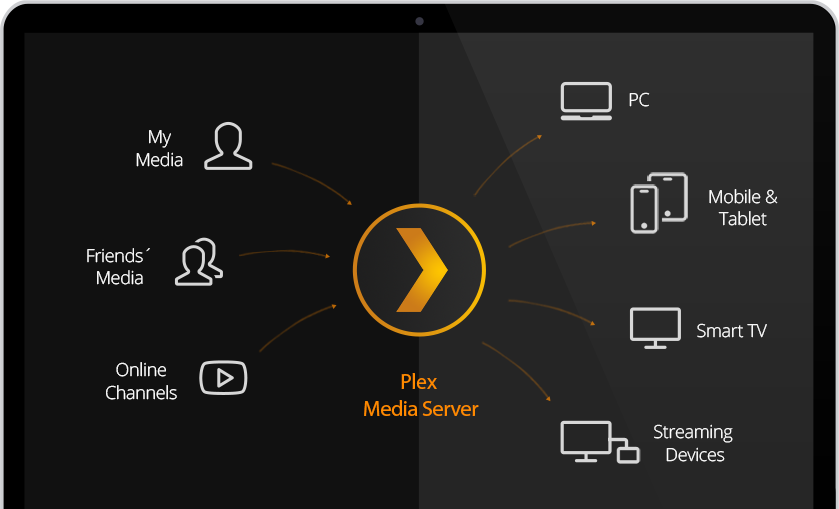 The dedicated media server made Plex unique among its media center peers. Once properly set up, it gave users with very little technical knowledge the ability to maintain a server that was capable of delivering their movies, TV shows, music, and pictures on demand throughout the house and, later, the world. We'll take a more detailed look at each of the Plex components next.

The “brains” behind the entire Plex ecosystem is Plex Media Server (PMS). This software, available for Windows, Linux, and OS X, manages your media database, metadata, and any necessary transcoding, which is one of its best features. Although far from error-free, the PMS encoding engine can convert virtually any video codec and container on the fly to a format requested by a client device. Want to play a high-bitrate 1080p MKV file with a 7.1 DTS-HD MA soundtrack on your Roku? No problem; Plex will seamlessly transcode that high quality source file to the proper format for Roku, as well as your iPad, or your Galaxy S5, and many other devices, all without having to store multiple copies of your video files. 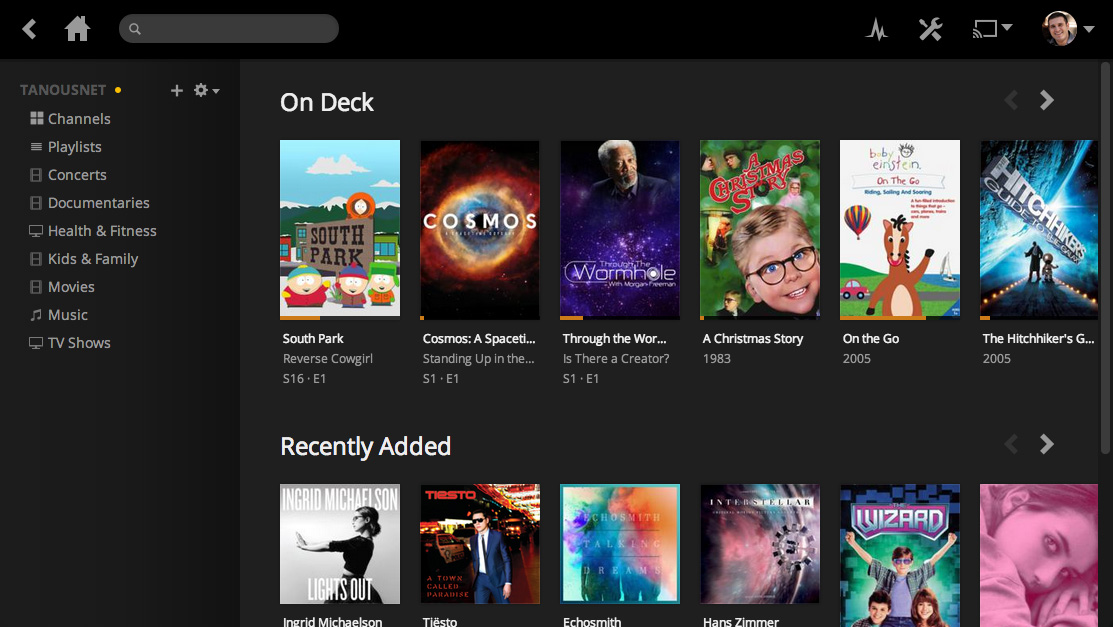 Aside from very limited functionality, all of the Plex clients that we’ll discuss today rely on PMS to function. This is therefore the first app you should install and configure when starting out with Plex. The installation and configuration steps are covered later in this article.

Plex Home Theater (PHT) is the Plex team’s flagship app, and once the only component of Plex. It runs officially on Windows and OS X, and there are some community-supported unofficial Linux builds. As its name implies, PHT was built for the living room, and features a “10-foot interface” that works equally well with remote and keyboard. 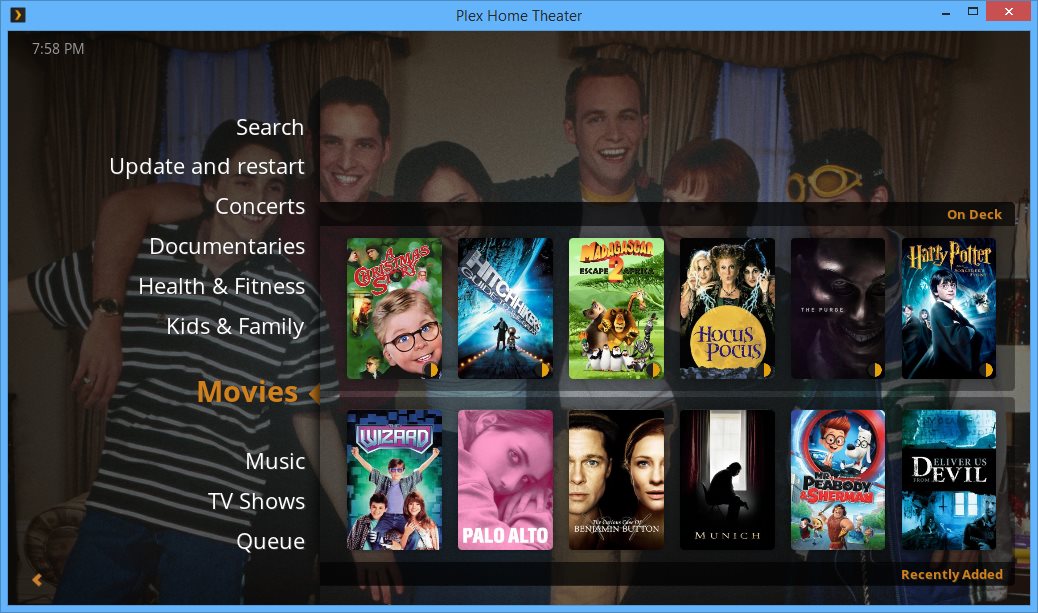 Compared to the Plex mobile and device clients, which we’ll discuss next, PHT offers two primary advantages. First, it can be customized with a number of skins, giving the software a unique look and feel. It’s important to note, however, that skin support for Plex Home Theater version 1.0+, which debuted earlier this year, is still relatively limited compared to older editions, thanks to a major code overhaul.

The second advantage of PHT is that it supports “direct play.” We’ll talk about direct play again later on but, in short, it means that PHT is the only Plex client that supports the full, non-transcoded playback of all files. This is particularly important for users ripping lossless copies of their Blu-ray collections. If you’re going to store all that extra data, you likely want to actually watch the full quality version of the film, and not risk losing any detail via unnecessary transcoding.

But PHT has its shortcomings, too. You’ll need dedicated hardware to run the software, and it lacks robust mouse support that makes navigating large databases easier. These caveats make one of the mobile clients, or Plex/Web (which we’ll get to in a moment), often a better choice for getting up and running with Plex quickly.

Once confined to Macs, Plex has exploded in recent years to cover a huge range of devices and electronics. These clients are occasionally limited to basic media playback, and many of them aren’t free (charging for mobile clients is one of the ways that the Plex team is able to offer the server and desktop client for free), but they’re easy to set up and offer great convenience for enjoying your content on the go. Here’s a rundown of many of the Plex clients as of the date of this article (items with asterisks require a PlexPass subscription):

Each app is a little different in terms of look and feel, but they all offer full access to your server’s media library. With a free Plex account, you can also set up remote streaming without having to worry about static IPs, port forwarding, or firewalls. It’s a simple process of merely creating an account at the Plex website and logging into that account on both your server and your mobile device. The server negotiates the connection and, boom, you’re watching your own personal Netflix-style video library from a hotel on the opposite side of the country.

Plex Web (PW) is an HTML5-based web client that aims to bridge the gap between PHT and the mobile clients. Available for free, PW lets users browse and play back their Plex library, as well as manage it, from anywhere. This gives Plex users who don’t want to shell out for a paid mobile app the opportunity to watch their content from any modern Web browser. Just as with the mobile clients, the magic of remote access is handled by your Plex account. 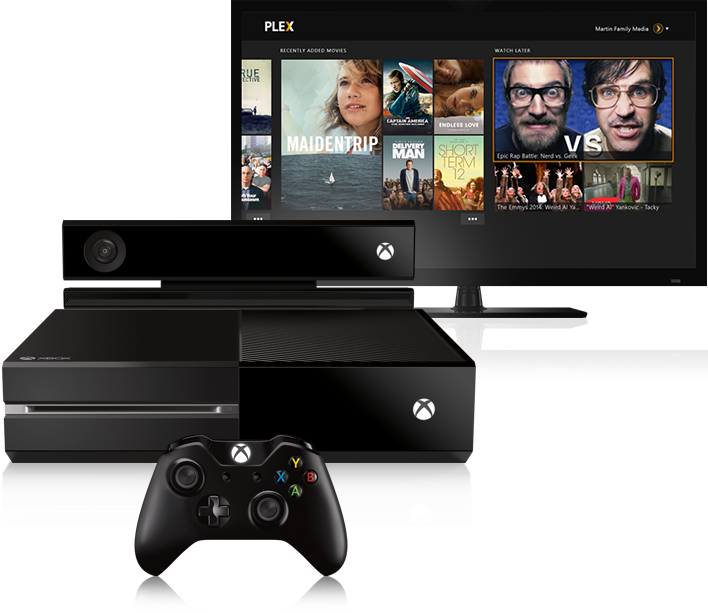 Just about everything sent to Plex Web needs to be transcoded, so keep that in mind as you plan your server build, which we’ll get to in the next section. The Plex Web interface also now allows users to manage their PMS libraries, which means the ability to scan for new content, edit metadata, and organize media from anywhere.

Mobile apps and hardware aside, you can create a great Plex experience without spending a penny. But if you want access to a bit more functionality, early software releases, and the satisfaction of supporting the hardworking Plex team, you can sign up for a PlexPass.

Introduced in August 2012, PlexPass is a paid premium tier ($4.99 per month, $39.99 per year, or $149.99 lifetime) that gives members some pretty slick exclusive features, including a cloud-based automatic camera upload function for mobile devices, the ability to sync select media to cloud providers for faster remote streaming, a multi-user option, and, just added, integrated movie trailers and extras.

PlexPass definitely isn’t required, and I recommend that you give the software and service a thorough look before deciding. But if you love Plex, and want the most out of it, I’d recommend you consider a PlexPass to ensure the best experience.

Crysis arrives … across the pond