Your Plex server is built and humming along, and your clients are standing by to receive content. Now you just have to figure out how to manage your existing media, and any files you’ll be adding going forward. Below are some tips that I’ve found helpful over the years.

Plex Media Server is pretty good at interpreting a variety of file naming conventions for your TV shows and movies, but I’ve found that sticking to the following strategy produces the best results with the least amount of errors and misidentifications.

For the best experience, organize all of your movies into individual subfolders with the movie’s name followed by release year in parentheses. Some movies have potential variations in their spelling, such as the 1995 sci-fi thriller 12 Monkeys. Or is it Twelve Monkeys? To reconcile these disputes, head over to the Internet Movie Database and search for the film in question. Even if you prefer to use an alternate spelling, name your video files and folders the exact same way as IMDB. Returning to our example, we see that IMDB has the film listed as Twelve Monkeys, so we’ll name the corresponding video file “Twelve Monkeys (1995)” and put the file in a subfolder of the same name. 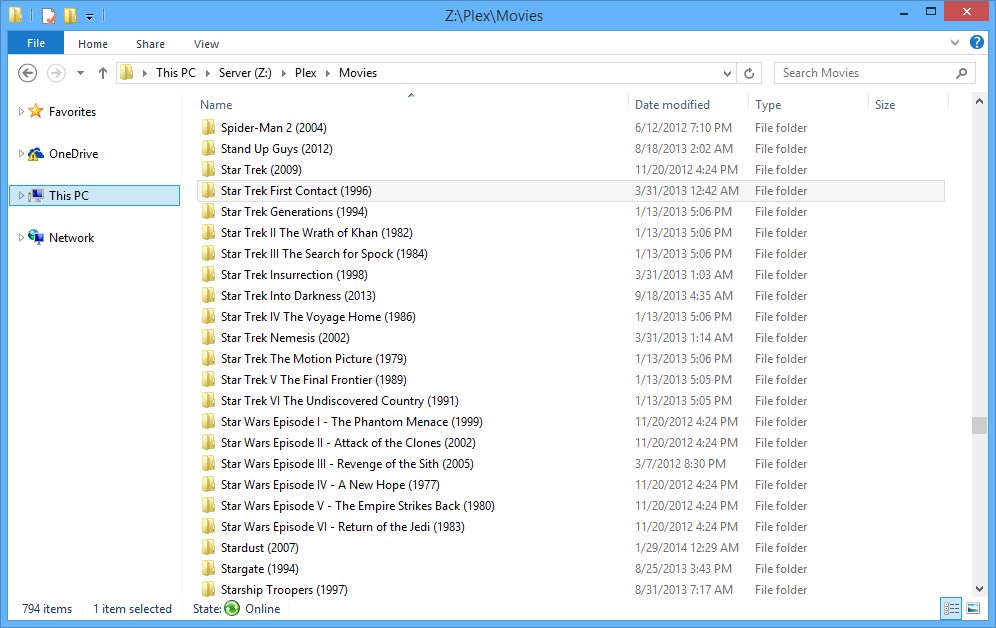 Let’s visualize this with a screenshot. Here’s a sample of my Plex media files. I have one main folder on my NAS titled “Plex” with a subfolder for “Movies.” I then have it further divided by subfolders for each and every movie, with the movie’s name and year in parentheses. Inside each folder is usually a single file, the movie itself, with the same naming convention: IMDB Title (Year).extension.

Once your movies are scanned and identified by PMS, you can go in and manually correct any titles that are, in your opinion, misspelled or improperly stylized. We’ll discuss this more in the ‘Metadata’ section later on.

TV shows follow a similar pattern to films, although with special consideration to season and episode numbers. First, though, you’ll want to create a separate subfolder for each TV show, named Show (Year), with ‘year’ corresponding to the date the show first aired. Follow this step by creating additional subfolders for each season, named simply Season [number]. Like we did with movies, you’ll want to defer to an online database to reconcile any show naming conflicts. Unlike movies, however, Plex scans TV shows via TheTVDatabase (TheTVDB.com), so be sure to check the site out if you’re unsure on any names. 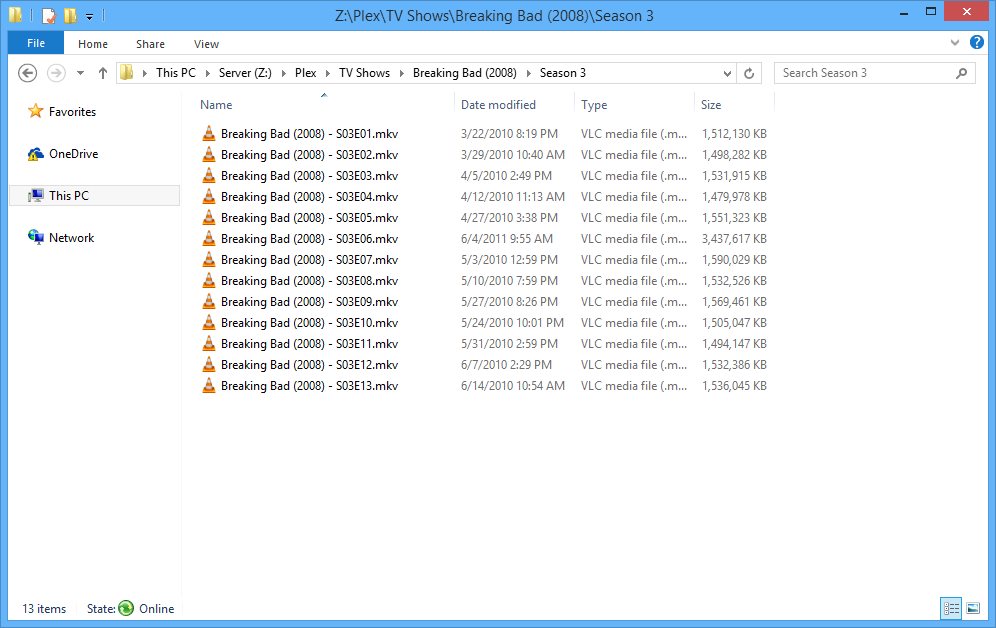 When it comes to individual episode files, Plex will generally pick up different episode ordering schemes, but I’ve found the following format to be the most successful: Show (Year) – S[season number]E[episode number]. That’s a little confusing but we can clear it up with a specific example.

Let’s say I’ve just ripped the third season DVD set of Breaking Bad and I want to import episode 4, “Green Light.” Once I’ve ripped and encoded the video for that episode, I’ll name the file: Breaking Bad (2008) – S03E04. Note once again that I’m using the year that the show first aired (2008) and not the year the episode aired (2010).

Plex can automatically read your iTunes music library without any special setup. But if you rely on manually managed music files, you’ll want to stick with the following naming strategy: Artist/Album/[Track Number]-[Track Title].

Giving this method a specific example, the first track of Aerosmith’s 1989 album Pump should be stored as Aerosmith/Pump/01-Young Lust. Notice that, unlike movies and TV shows, we’re not using an album year in the file or folder names here. This is my own personal recommendation based on some quirky behavior with album identification that I’ve witnessed over the years. Plex will correctly scan most albums that contain a year in their file path, but will occasionally misidentify an album, mixing it up with another similarly named album from that year. In every case where this occurred, removing the year from the file path immediately cleared up the confusion, and PMS was able to correctly identify the song or album on the first try.

So if you’re starting from scratch, I recommended omitting the year from the album folder unless the year is explicitly part of the album’s title, like Vault: Def Leppard Greatest Hits (1980-1995). If, however, you already have a vast collection of music organized in a way that incorporates an album’s release year, you’ll likely be fine leaving the naming convention as is. Just be on the lookout for misidentifications while PMS scans your media into its database.

This may be the shortest section of this article, because let me tell you the good news, friends. Plex supports just about every file format and codec under the sun with only one, slightly disappointing exception: disc images.

That’s right, Plex can handle mkv, mov, m4v, avi, mp3, aac, ogg, flv, and countless other formats, but it won’t work with image files (IMG, ISO) or full disc directories (VIDEO_TS, BDMV). This means, of course, that you can’t rip a complete copy of your movie and play it back with menus, extras, etc. (this is how the ultra-expensive Kaleidescape servers work). The Plex team explains this omission by arguing that the philosophy behind Plex is that a user should be able to select a video file and launch it immediately without any intermediate steps. Ripping an entire disc and having to go through both the Plex interface and disc menu runs counter to that philosophy. Not having the option to rip everything together is a bit of a bummer, but users can always rip a disc’s extra features individually and add them to their database manually or, if they’re a PlexPass user, Plex now offers select trailers and extras for some movies.

Once upon a time, not so long ago, the ability to edit your media files’ metadata in Plex (and its cousin, XBMC/Kodi) was greatly limited. The software scanned your files and scraped metadata from various online databases, but if you wanted to edit or change that data, you were stuck modifying esoteric XML files. But, behold! Those days are thankfully long gone.

Plex Media Server now features a relatively robust editor that lets users customize titles, synopses, genres, sort titles, production studios, and more. A few things are missing, such as the ability to edit a film’s list of actors, but most users will be happy with the included editing features. 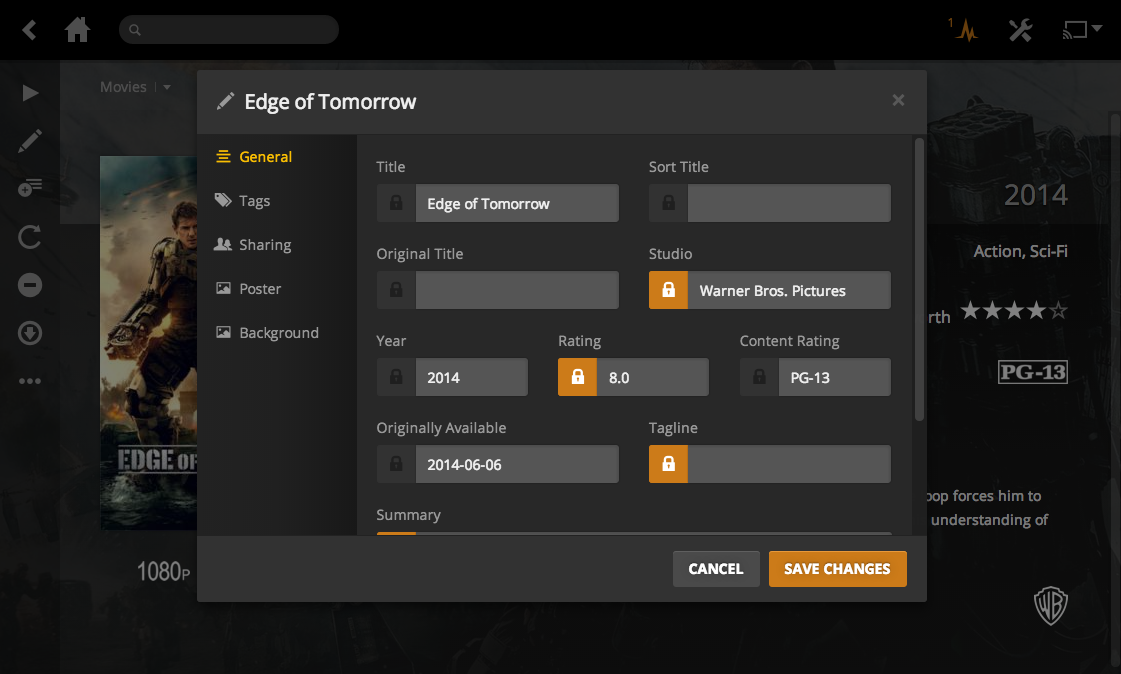 Metadata editing also used to require direct access to the server running PMS. Now, thanks to Plex Web, users can log into their server from anywhere in the world and add, edit, or remove content from their libraries. 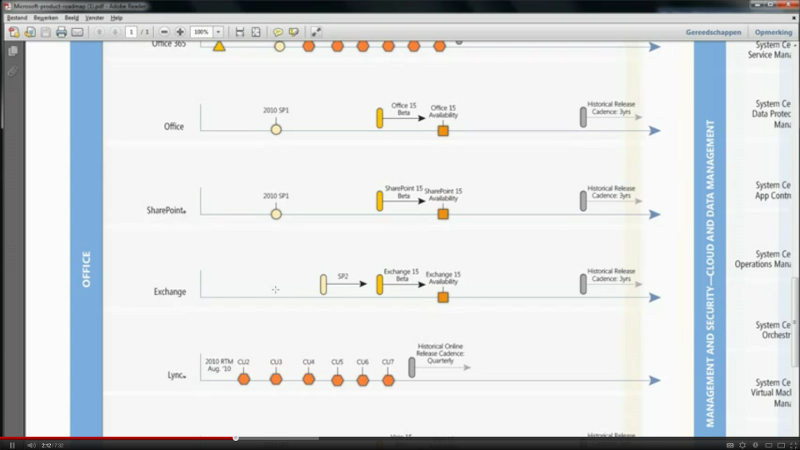