Sporting a complete redesign and the fastest mobile GPU in existence, this thing is for real. 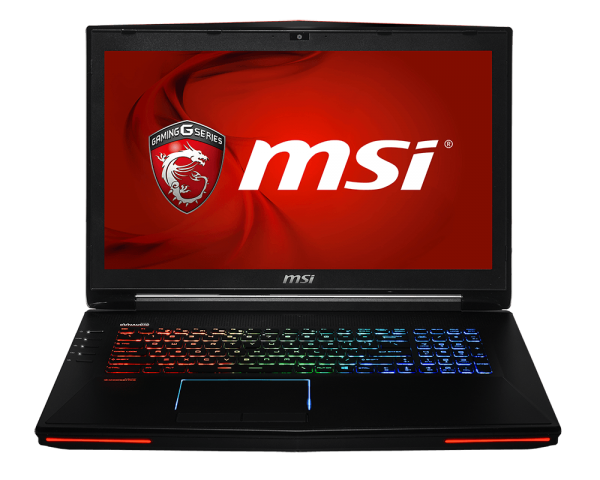 MSI’s unapologetically large GT70 “Dominator Pro” series of machines knows its audience well: for every gripe about the notebooks’ hulking sizes, a snicker and a shrug are returned by the community, who rarely value such items as portability as highly as the critics who are hired to judge based on them.  These machines are built for power, first and foremost.  While featherweight construction and manageable dimensions matter to those regularly tossing machines into their bags, by contrast, MSI’s desktop replacements recognize the meaning of their classification: the flexibility of merely moving around the house with one’s gaming rig is reason enough to consider investing in one.

So its priorities are arguably well in line.  But if you want to keep on dominating, regular updates are a necessity, too.  And with the GT72 2QE, MSI takes it all up yet another notch: our review unit (GT72 2QE-208US) packs four SSDs in a RAID-0 array (as opposed to the GT70’s three), plus a completely redesigned case which manages to address some of our biggest complaints.  Oh yeah, and an NVIDIA GTX 980M GPU with 8 GB GDDR5 RAM—the fastest mobile GPU ever.  (You can find much more information and analysis on this GPU specifically in Ryan’s ever-comprehensive review.) 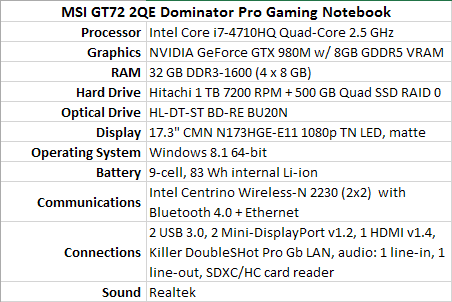 Of course, these state-of-the-art innards come at no small price: $2,999 as configured (around a $2,900 street price), or a few hundred bucks less with storage or RAM sacrifices—a reasonable trade-off considering the marginal benefits one gains from a quad-SSD array or 32 GB of RAM. 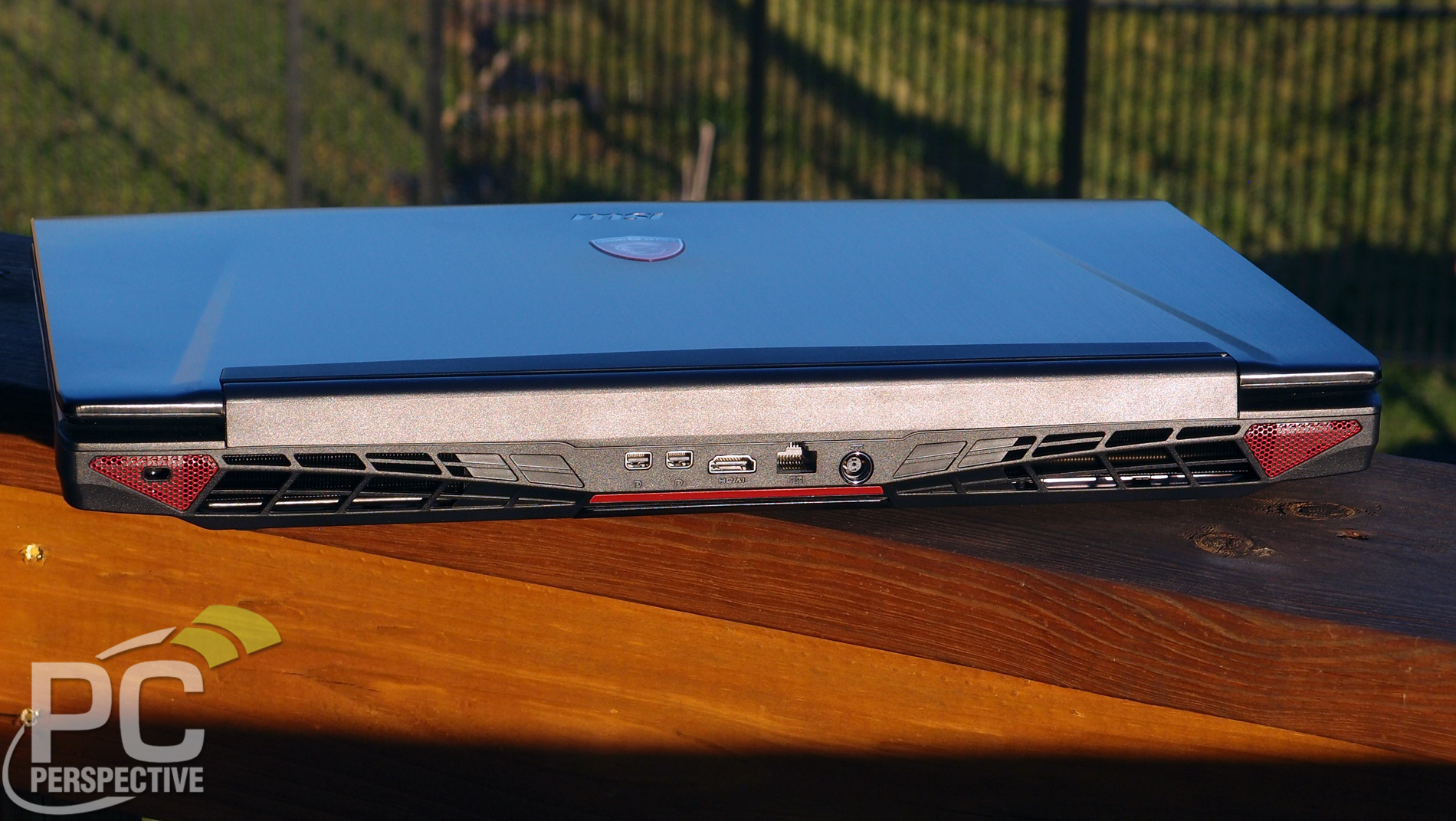 Yes, it’s big, which should be no surprise to anyone in the market for a 17-inch gaming notebook.  The GT72’s dimensions are very close to that of its predecessor, with just slightly less thickness overall in the new case.  It weighs in at right around 8.43 pounds (versus the GT70’s 8.35 pounds)—so it’s squarely in the category of desktop replacements, even though it is still considerably lighter than Dell’s Alienware 17 (9.15 lbs.).  By comparison, the ASUS ROG G751 is nearly the same weight at around 8.4 lbs. 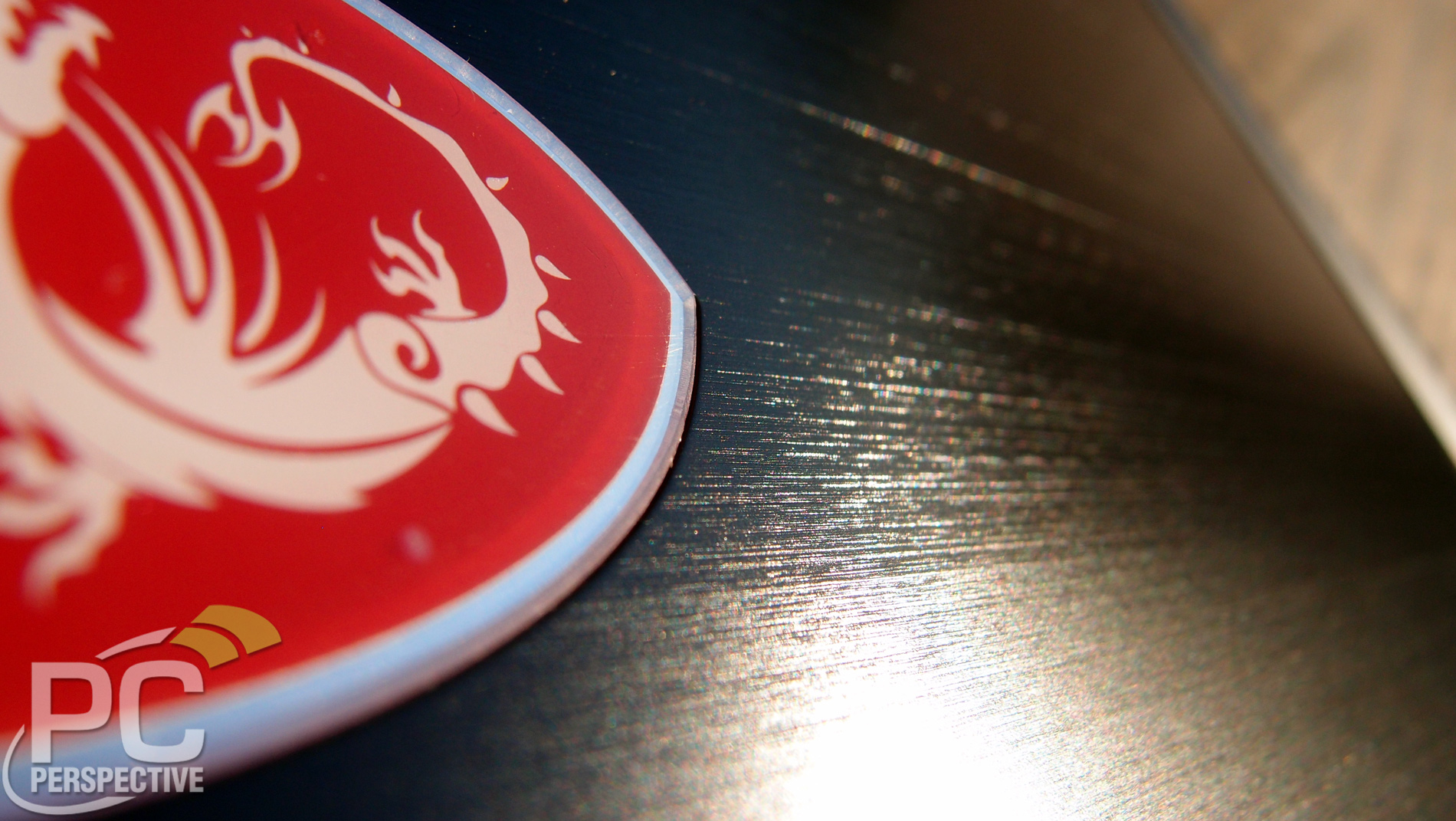 In spite of its heavyweight design, the materials used to construct it are actually only minimally comprised of metal.  The display lid is coated with a black brushed aluminum which exudes a high-quality appearance, but which only manages a reasonable degree of torsion resistance: with a small bit of effort, the lid will twist, and moderate pressure from the back results in visible distortions on the screen.  The rest of the lid is actually plastic, including the shiny plastic bezel. 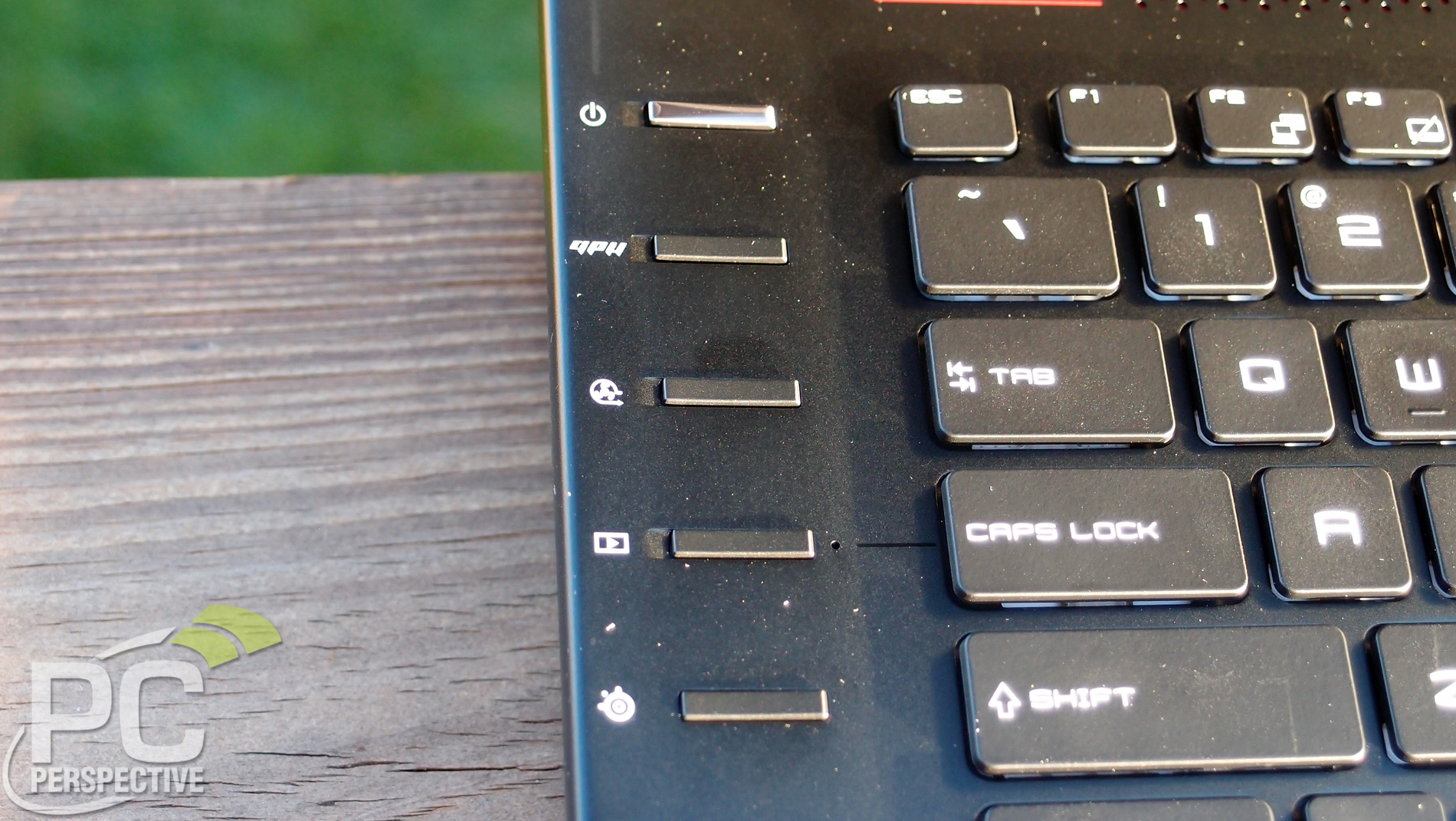 The base unit, meanwhile, features a metal top cover and comfortable rubberized polymer palmrest, both of which lend superior ergonomics as compared to the GT70 we reviewed back in June.  The entire rest of the unit is plastic, though in most areas this approach seems to get the job done: the base unit feels very stable on a surface, flexing almost imperceptibly across the board.  Other upgrades include a near-complete eradication of glossy surfaces (save for the screen bezel outer border) and a migration of the control center to the left side of the notebook (from above the keyboard previously)—complete with new physical buttons to replace the awful capacitive ones on the GT70.  The general feel of the machine is far closer to that of an ASUS ROG or Dell Alienware offering than anything we’ve seen in MSI’s GT60/70 series in the past.  It’s a big step forward in terms of design for the notebook manufacturer, and one which leaves us with even fewer reservations as we recommend our top choices to discerning gamers. 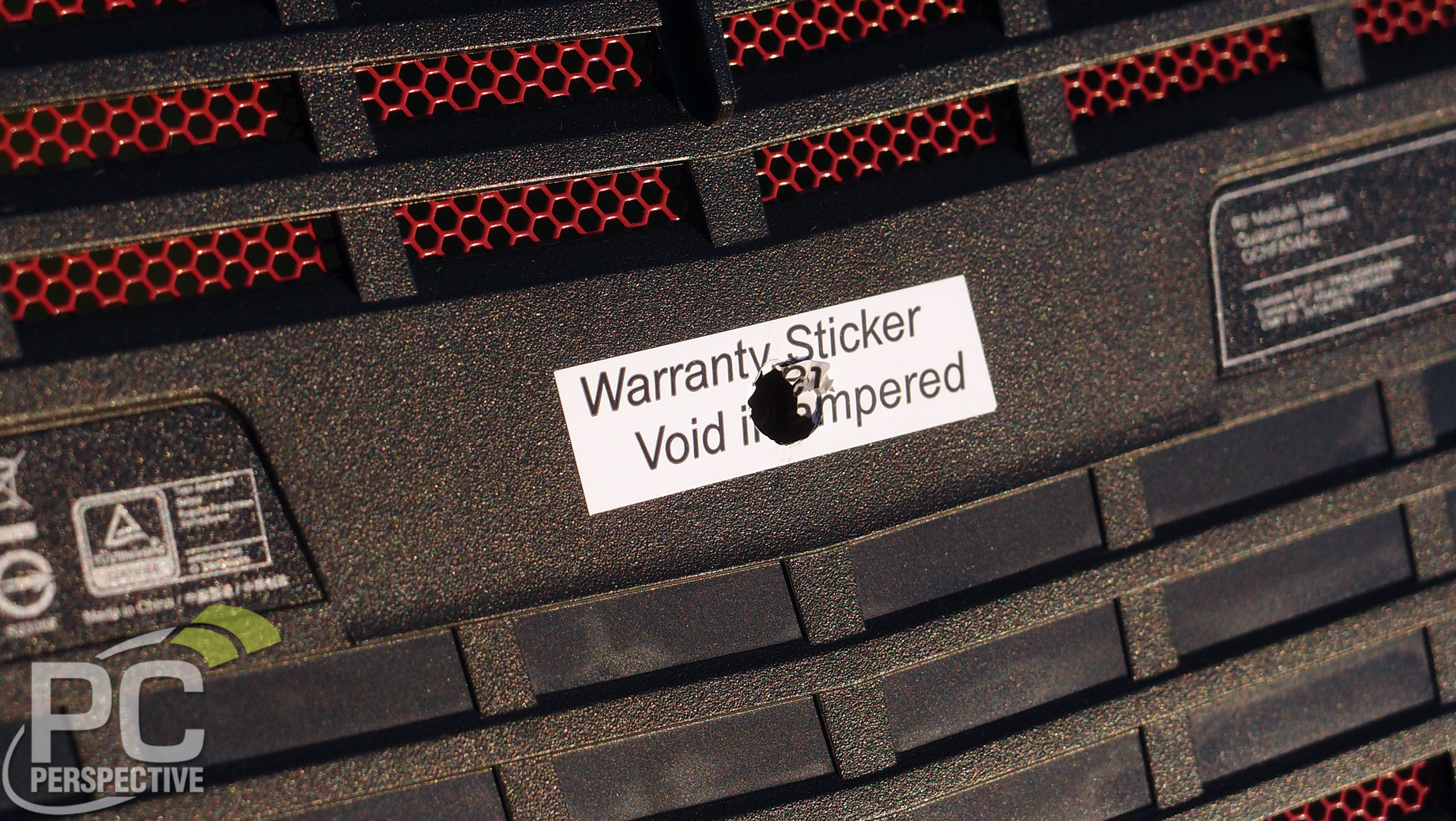 The very bottom of the unit features a single panel—also plastic—which is secured to the unit by seven phillips-head screws, one of which rests beneath the ever-controversial Warranty Void if Tampered sticker (pictured).  This panel features a massive array of cutouts for ample ventilation of the internals.  Almost half of the bottom of the machine is comprised of these vents, in fact—though their clever placement in the center quadrant of the unit and outward angle (to match that of one’s legs while the notebook is resting on the lap) provide for more comfortable lap-based gaming. 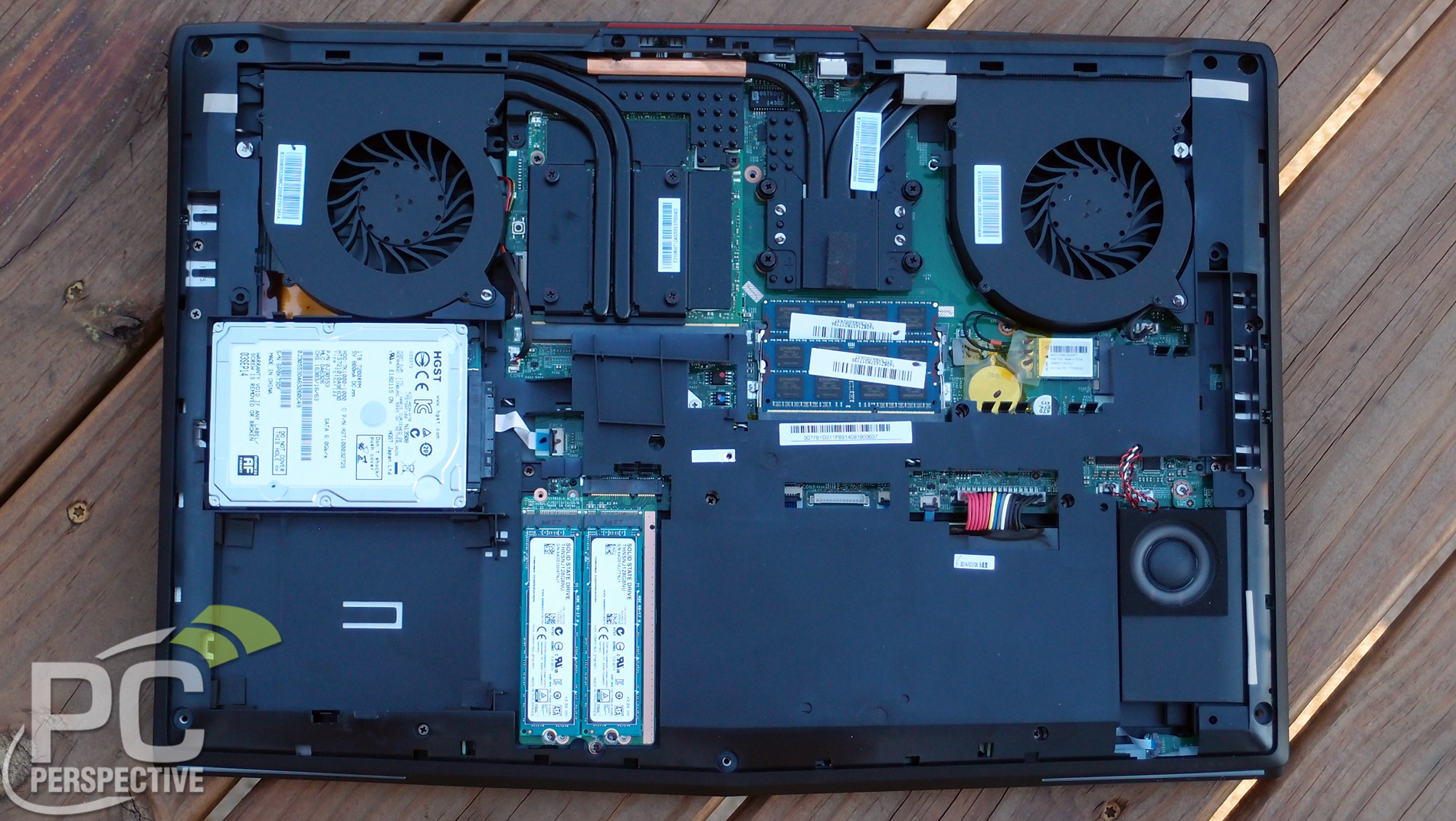 Getting into the unit to replace parts, provided you aren’t deterred by the aforementioned sticker, is easy—and inside, you’ll find access to nearly all major components, including the (two) hard drive bays, M.2 SSD array, two RAM slots, the cooling fans, the WLAN adapter, and the CMOS battery.  MSI even boasts a replaceable GPU by way of a special kit available direct from the manufacturer.  In spite of this commendable level of repairability, however, one major item is forgotten: the integrated battery, which is curiously obscured by a solid piece of plastic and thus which cannot be replaced without considerable disassembly.

The GT72 ships with a comfortable array of “value-added” stuff, and fortunately, most of it is actually pretty useful.  On the unlikely-to-please end is Symantec Norton Internet Security, which is merely a trial and which will likely be removed by most gamers.  But that’s a quick and painless process, so it’s hard to fault a manufacturer for supplementing their income as such.

Most of the rest of the selections are likely to remain, including the expected MSI software to help manage the keyboard backlight and related items, SteelSeries Engine 3 customization software, and a six-month trial of the XSplit Gamecaster streaming software (which allows broadcasting to Twitch, YouTube, UStream, and other services).  Of course, you’ll also find the device driver-specific packages, which include the aforementioned GeForce Experience, Sound Blaster Cinema 2, and so on.

The machine features a 2-year hardware warranty, which is a great bonus only blemished by the omnipresent warranty void if tampered sticker on the bottom. 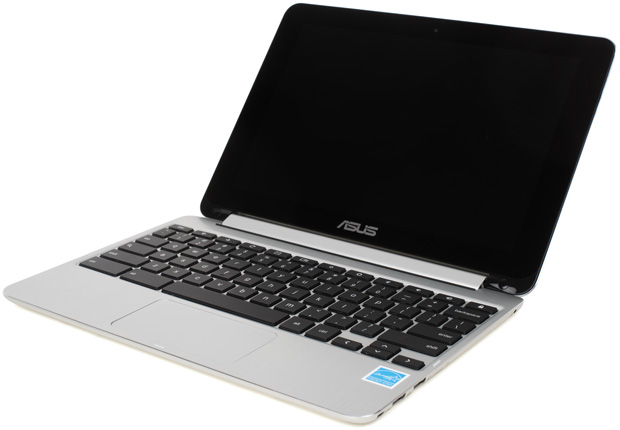