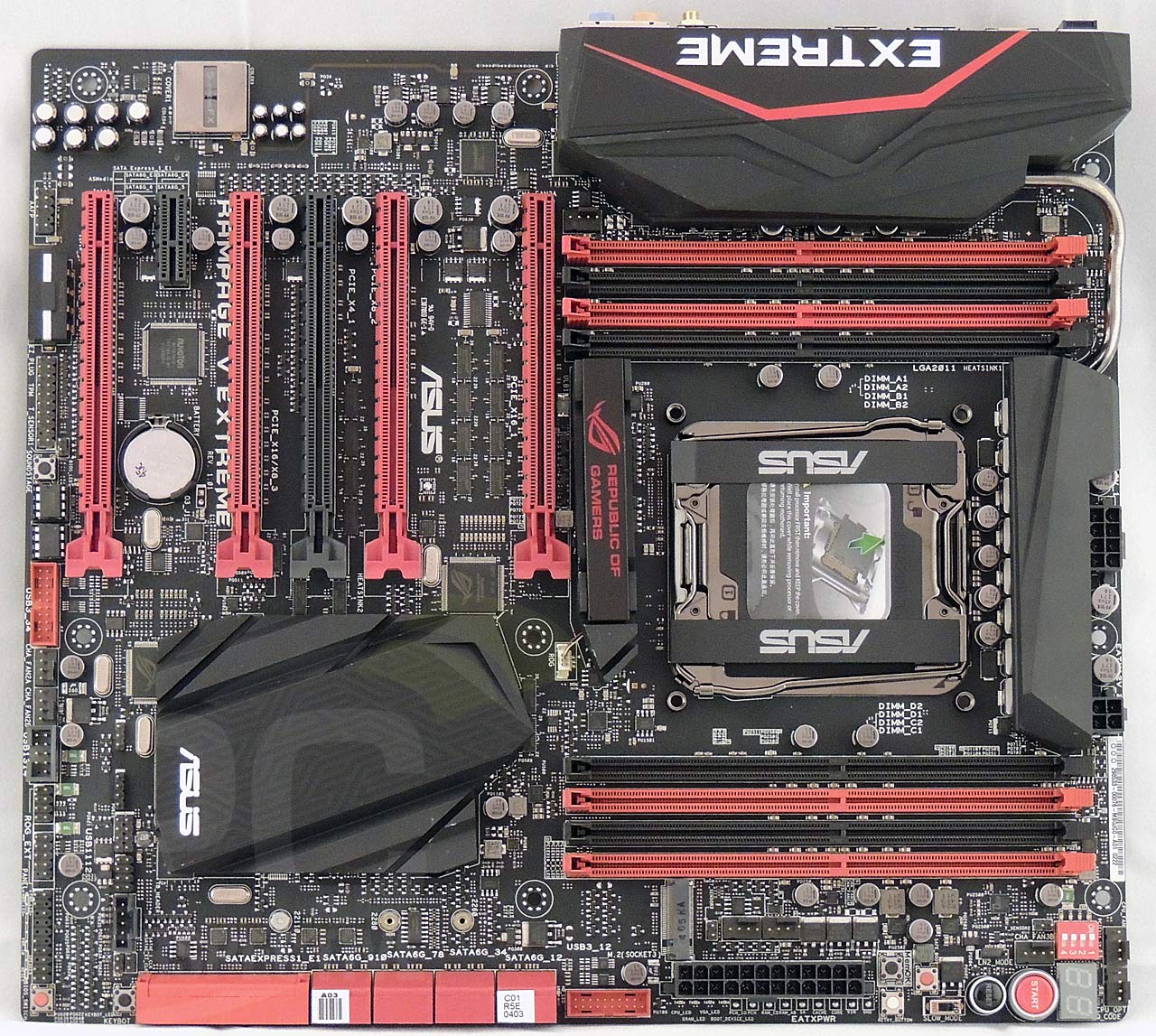 The ASUS Rampage V Extreme motherboard was designed with a ROG-themed aesthetic – black base color with red highlights on the integrated ports, giving it a sleek and powerful appearance. The ROG logo (embedded in the sink to the left of the CPU) , as well as the audio PCB separator line, both glow red to blend nicely with the board aesthetics. The additional room granted from the use of an EATX form factor allowed ASUS to pack all the features into the Rampage V Extreme board without inhibiting easy use of the board's features and ports. 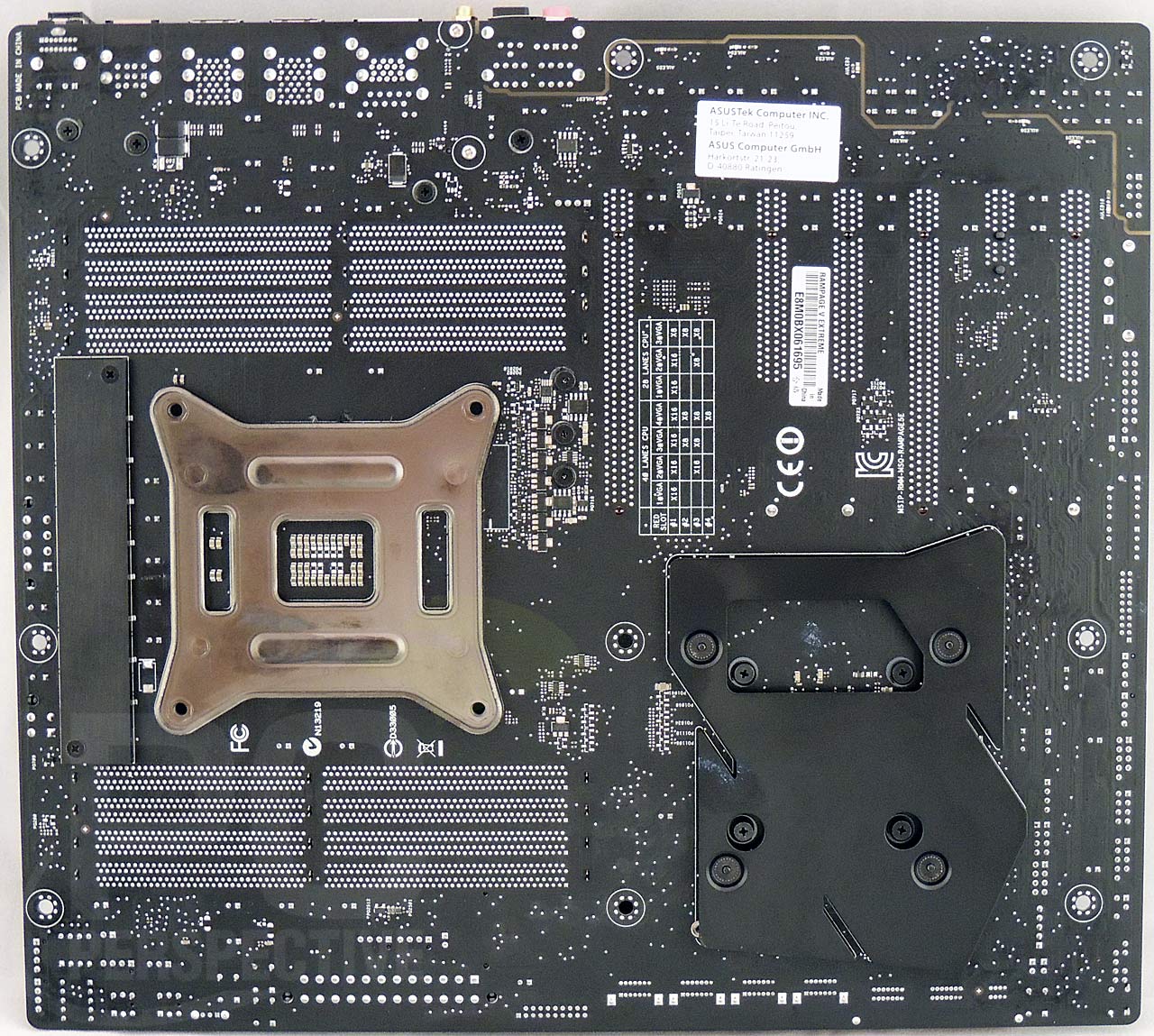 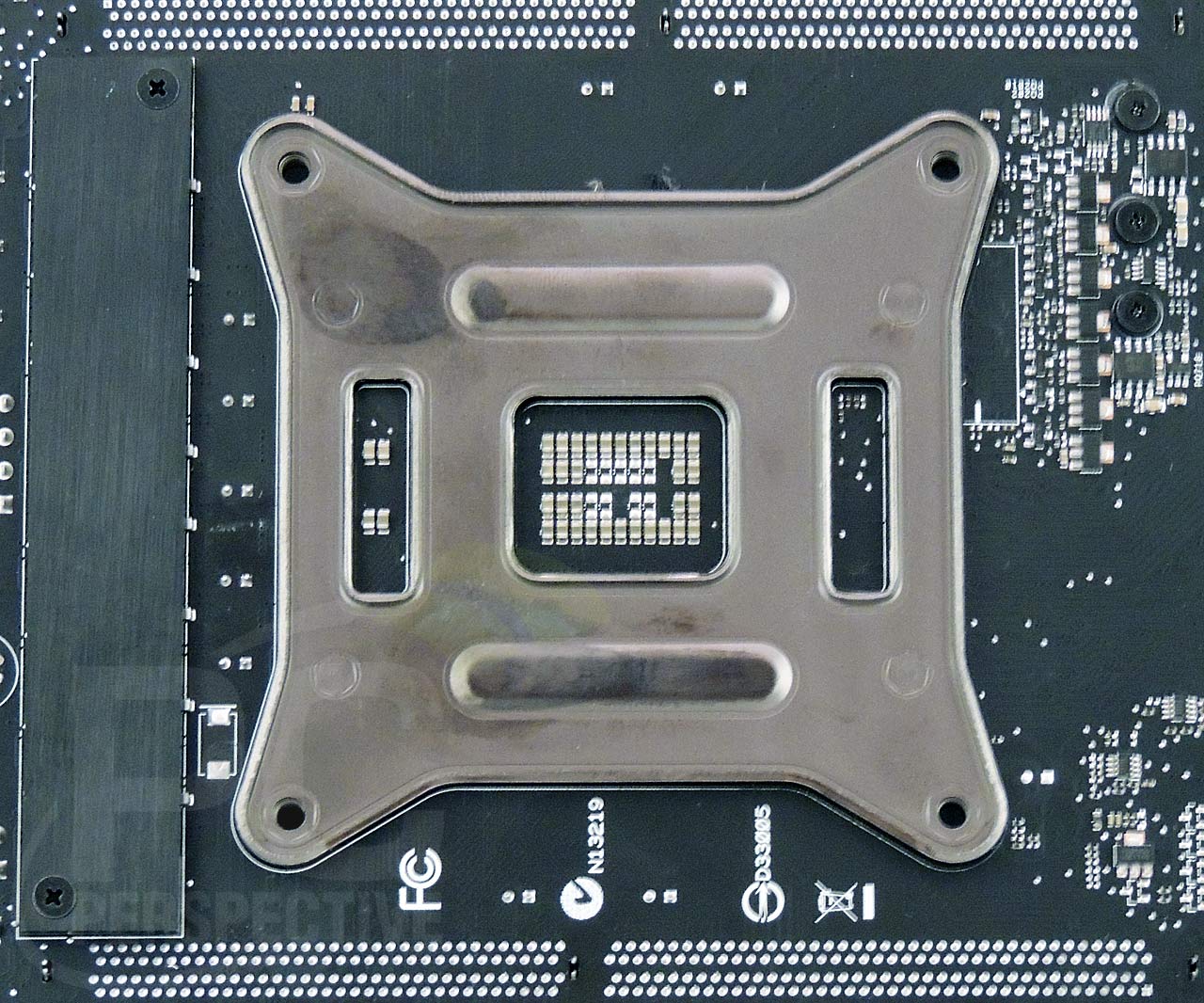 The backside of the X99 Gaming G1 motherboard is mostly component free, including the areas surrounding the CPU. The area directly underneath the CPU power phases is covered by an aluminum heat spreader offering additional cooling as well as protection to the ICs located there.  An additional aluminum heat spreader was placed over the area behind the Intel X99 chipset to provide a secondary cooling path as well.

ASUS added an armor-type overlay covering the rear panel as well as the VRM heat sink directly below the rear panel assembly. This gives the board a much more professional and uniform appearance, perfect for use in a windowed case. The Rampage V Extreme features the following port integrated into its rear panel assembly: a PS/2 keyboard/mouse port, two USB 2.0 ports, 10 USB 3.0 ports, one RJ-45 port tied to the Intel I218-V controller, three WiFi antenna ports with support for 802.11AC, a BIOS reset button (upper button to left of USB 2.0 ports), a dual purpose BIOS FlashBack / ROG Connect button (lower button to left of USB 2.0 ports), an optical audio port, and five analogue audio ports.

The USB BIOS Flashback button can be used to re-flash the BIOS without having to boot the system into the UEFI BIOS interface or DOS. Simply plug in a USB drive containing the proper BIOS file in the root of the drive into the bottom USB 2.0 port (to the lower right of the button) and press the button for 3 seconds until the integrated LED begins to flash. As the BIOS is updated, the LED flashing frequency increases. Once the LED goes out, the flash operation is completed and the board can be booted. Note that if the BIOS Flashback LED flashes for 5 seconds and then glows solid, it means that something went wrong with the flashback operation. Check the USB drive for the the BIOS file in the root and make sure that the BIOS file is named correctly. BIOS Flashback looks for a specific filename and file format when attempting to replace the on-board BIOS. According to the user manual, the BIOS file in the root of the flash drive must be named R5E.CAP for the BIOS Flashback applet to successfully re-flash the board's BIOS. 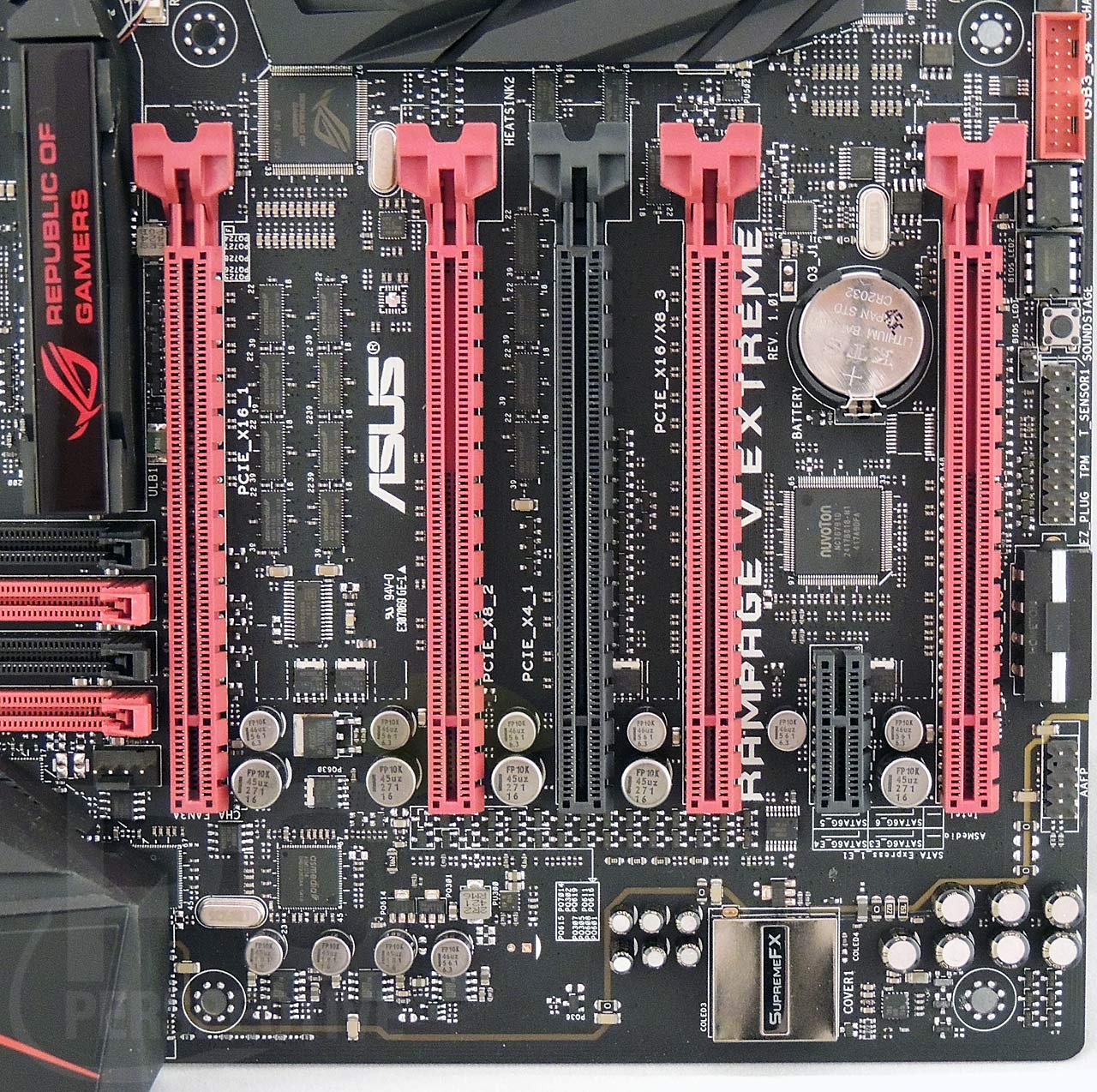 Common practice for high-end board design, ASUS integrated the SupremeFX 2014 audio subsystem into an isolated PCB to ensure audio clarity and fidelity and minimize line-noise and distortion. The PCB separator line glows red along its length when the board is powered, making for a nice effect in-line with the board's ROG-centric color scheme. The Realtek-based audio chipset is capped with a gold-plated heat sink with embedded SupremeFX logo, located in the upper left corner of the board and capped for signal shielding purposes. The front panel audio header is located the upper left corner of the audio PCB, to the left of the audio chipset. 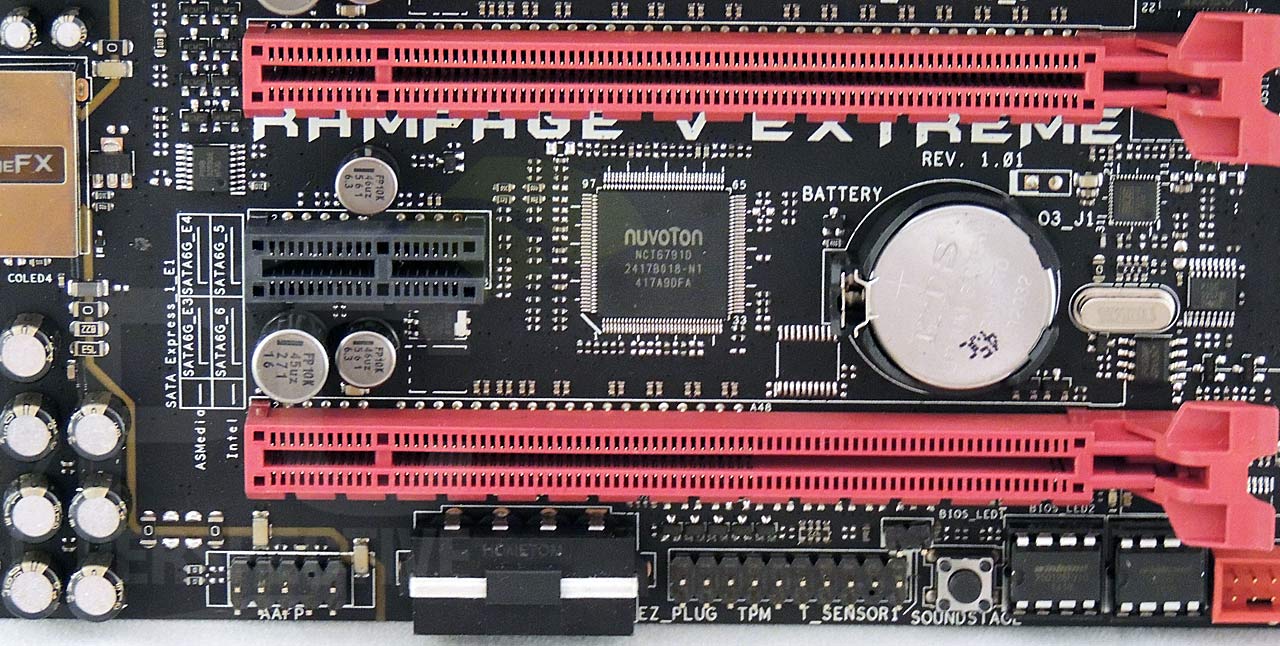 In the upper left corner of the board (and along the outer edge of the fourth red PCIe x16 slot) are the front panel audio header, the EZ Plug power connector, the trusted module port header, a temperature sensor header, the Sonic Soundstage button, and the dual BIOS chips. The CMOS battery sits just below the PCIe x1 slot, in between the third and fourth red PCIe x16 slots. The EZ Plug power connector can be used to provide extra power to the PCI-Express bus when multiple video cards are seated in the board. Simply plug in a MOLEX-style power connector from your PSU. The Sonic SoundStage button activates preset sound profiles or user created sound profiles for headphones attached to the front panel audio header. The active profile momentarily displays on the debug LED when the button is pressed. 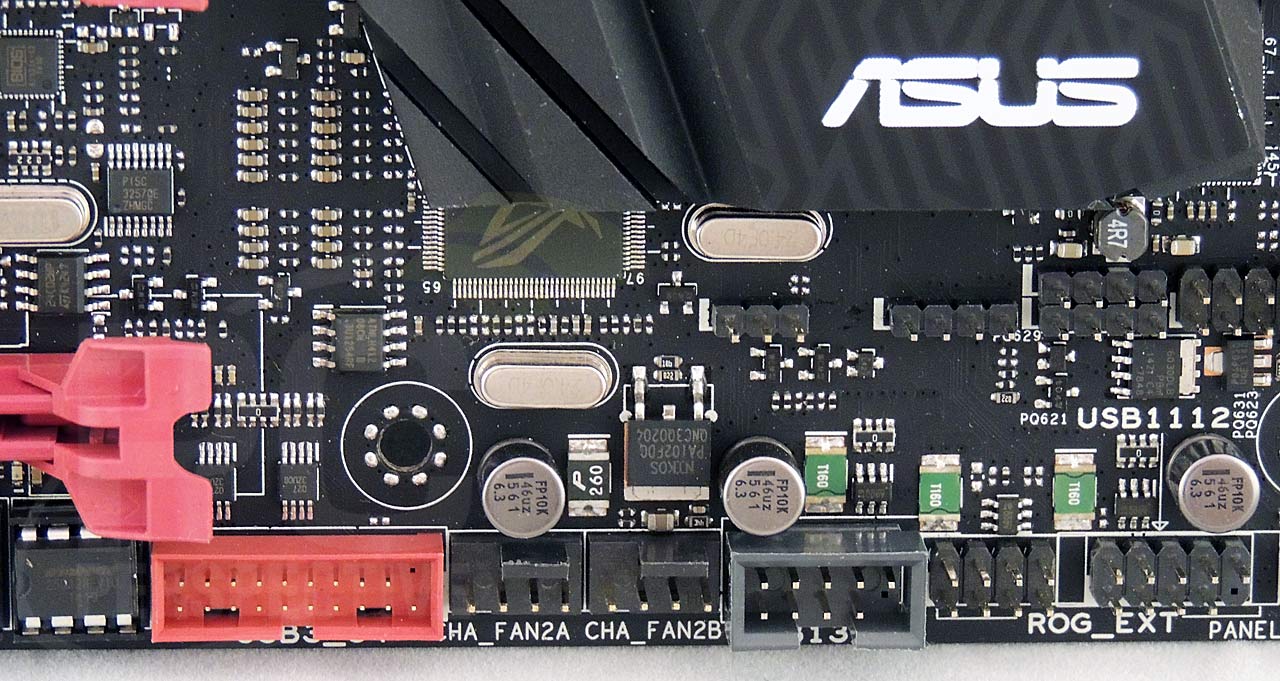 Along the lower edge of the fourth red PCIe x16 slot are one of the on board USB 3.0 headers, two 4-pin chassis fan headers, a USB 2.0 header, and the ROG OC Panel device headers (labeled ROG_EXT). The lower header in the ROG_EXT group can be used for two additional USB 2.0 ports if the OC Panel is not connected to the system. The OC Panel cable connects to the ROG_EXT ports, allowing the ROG OC Panel device to interact with the board. 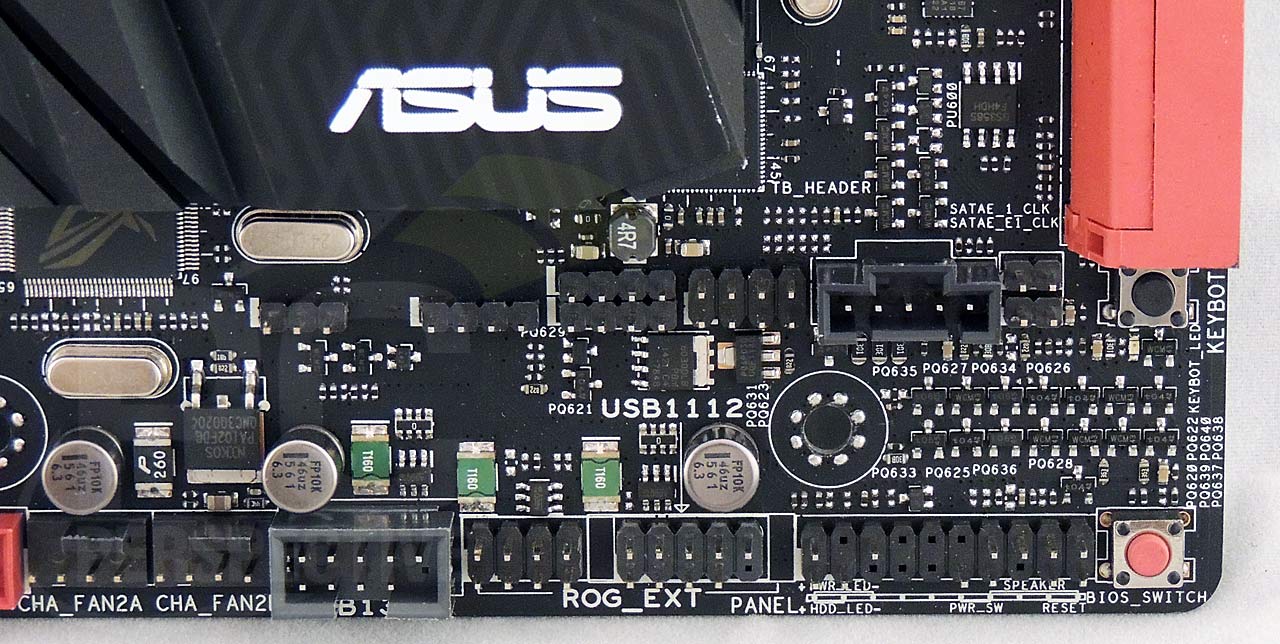 The USB 2.0 headers, ROG OC Panel device headers (labeled ROG_EXT), the Thunderbolt header, front panel header, the BIOS Switch button, and the Keybot button are located in the lower left corner of the board. The unlabeled headers just above the USB 2.0 headers are debug headers used for internal testing and verification by ASUS. The Thunderbolt header is used to connect to the optional ThunderboltEX II PCIe board using the included board adapter and USB extension cables. The KeyBot button activates KeyBot functionality for a keyboard attached to the upper USB 2.0 port in the rear panel. In conjunction with the KeyBot Windows software, the user to program in-game macros based on programmed key combinations. The BIOS Switch button can be used to switch between the primary and secondary BIOS chips. THe BIOS LED shows which BIOS chip is currently active. 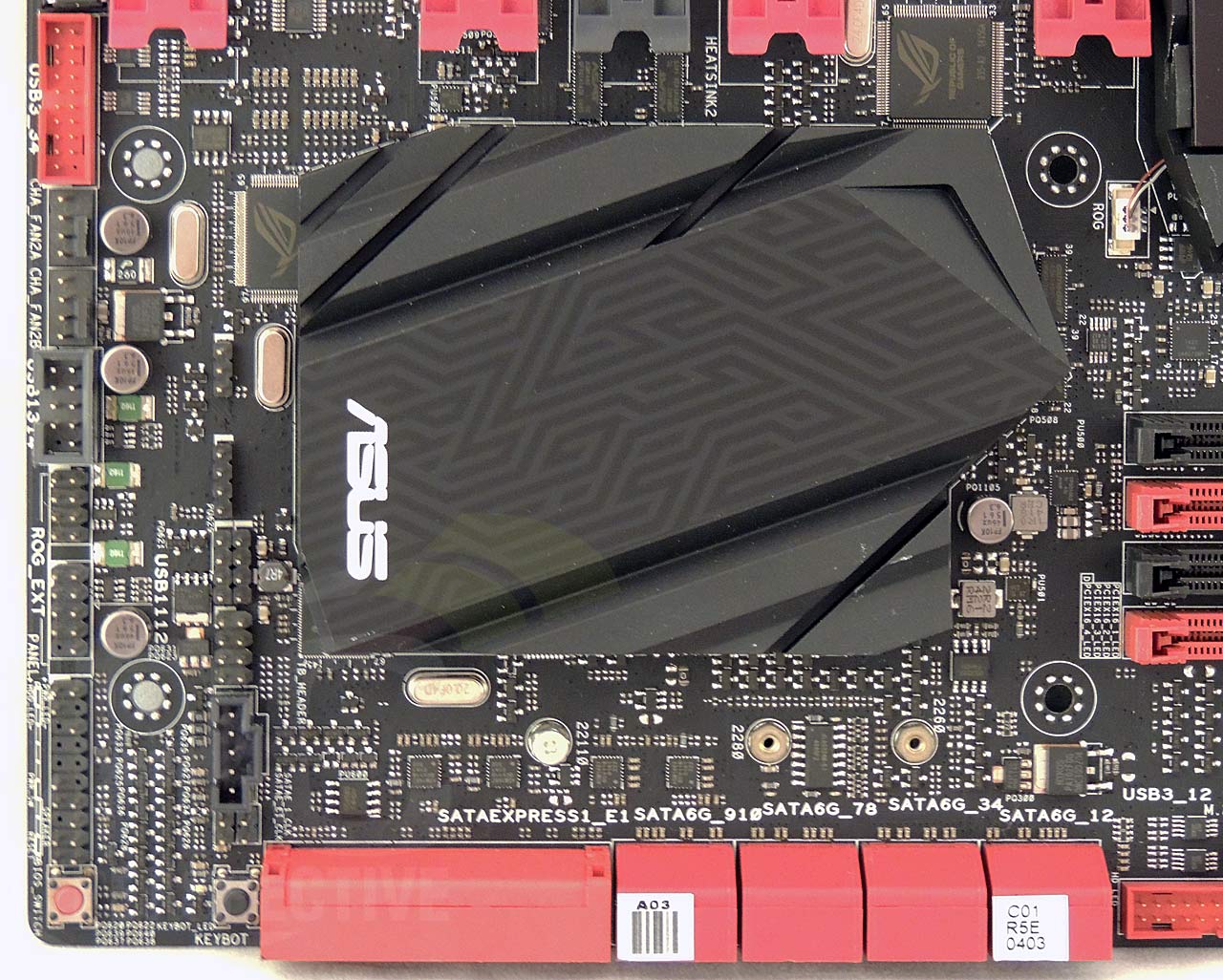 The Intel X99 chipset is covered by a large low-profile, aluminum heat sink with the ASUS corporate logo embedded in white lettering on its surface. 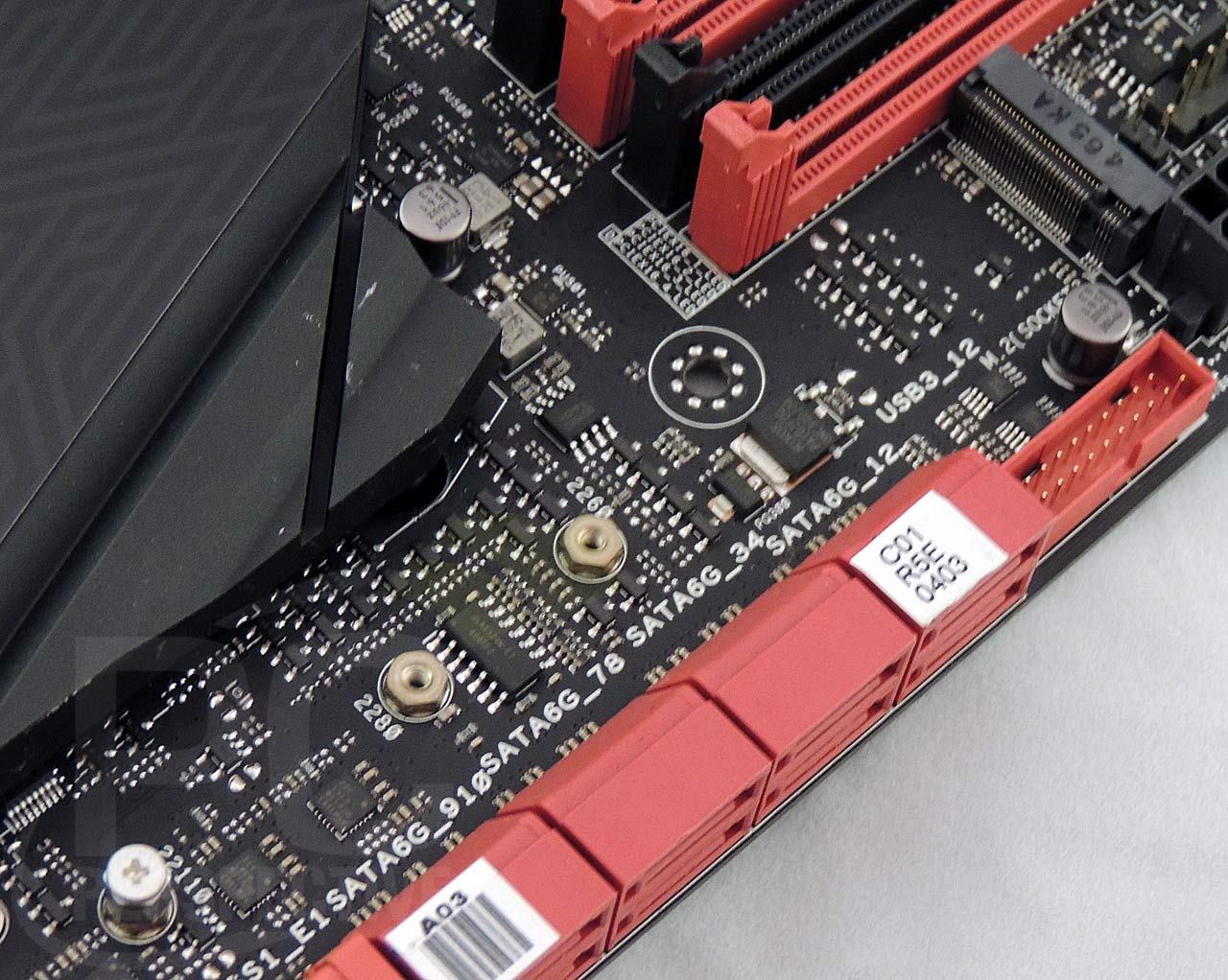 The M.2 PCIe x4 port is located to the upper right of the SATA port block, sandwiched in between the SATA ports, X99 chipset heat sink, and the lower set of DIMM slots. The board supports M.2 PCIe SSDs up to 80mm in length. Note that the M.2 and the fourth red PCIe x16 slot share bandwidth and are designed to be mutually exclusive. 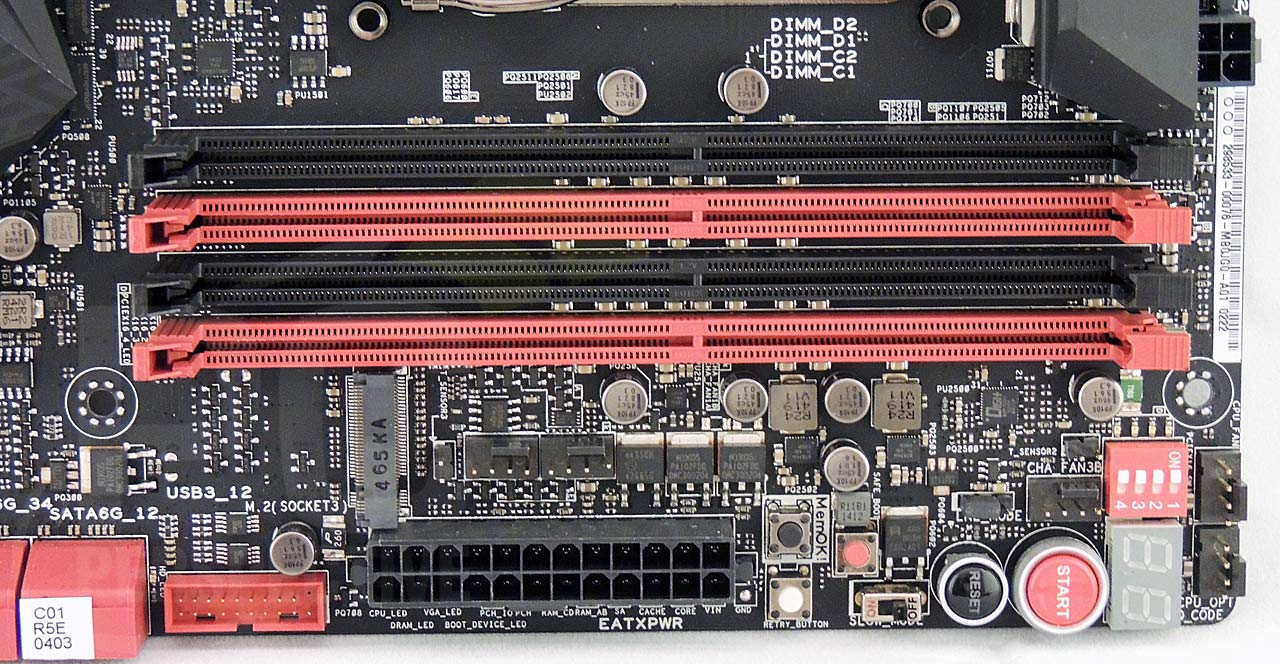 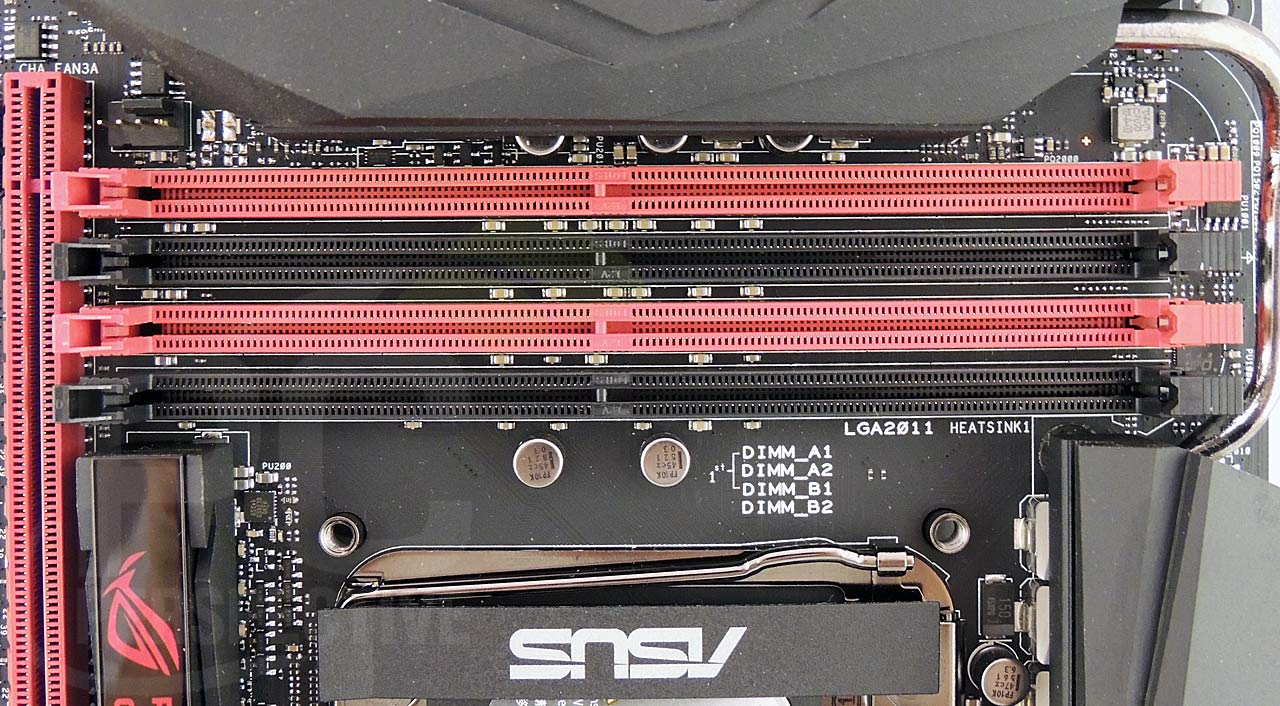 The eight on board DDR4 memory slots are located directly above and below the CPU socket with support of up to 128GB of memory across all slots. Quad Channel memory mode is enabled with memory modules seated in like colored slots. The primary memory slots are the red colored slots in both the top and bottom slot sets. Note that memory speeds above 2133MHz are considered overclocked speeds and are outside of the official Intel stock memory speed specifications. 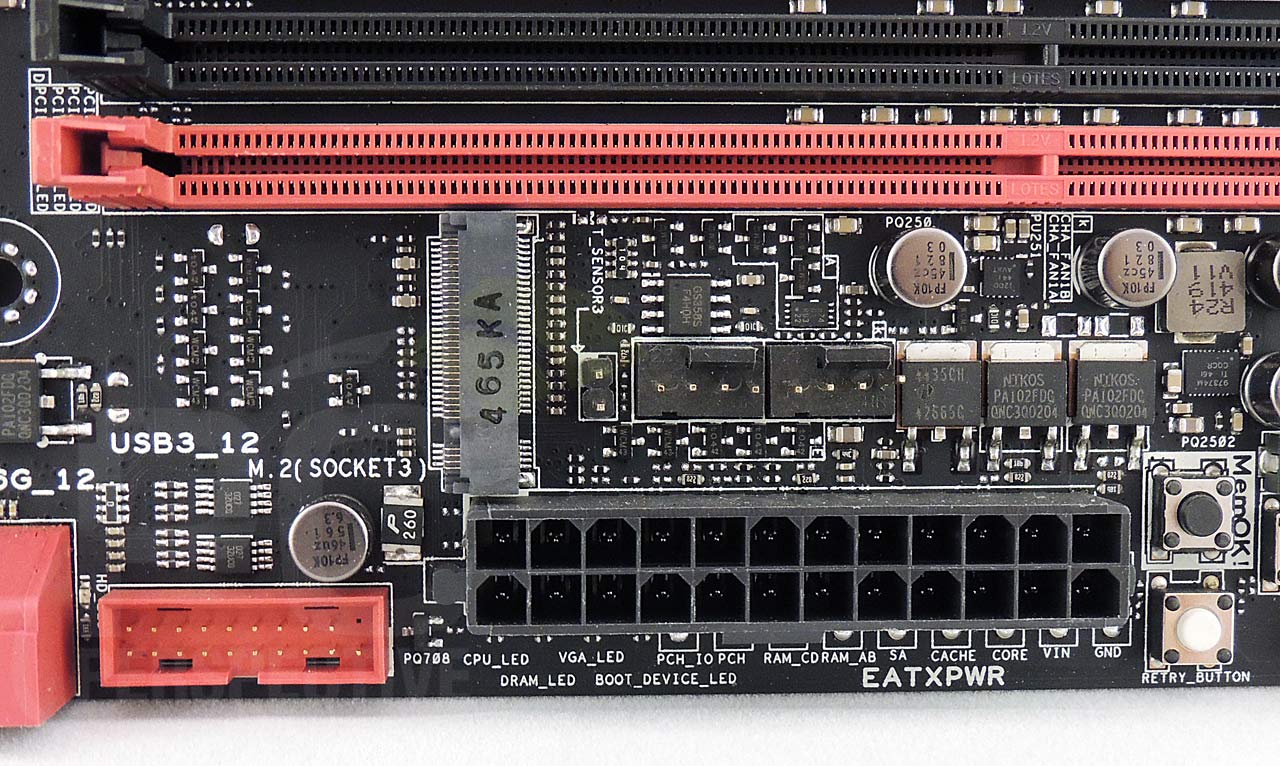 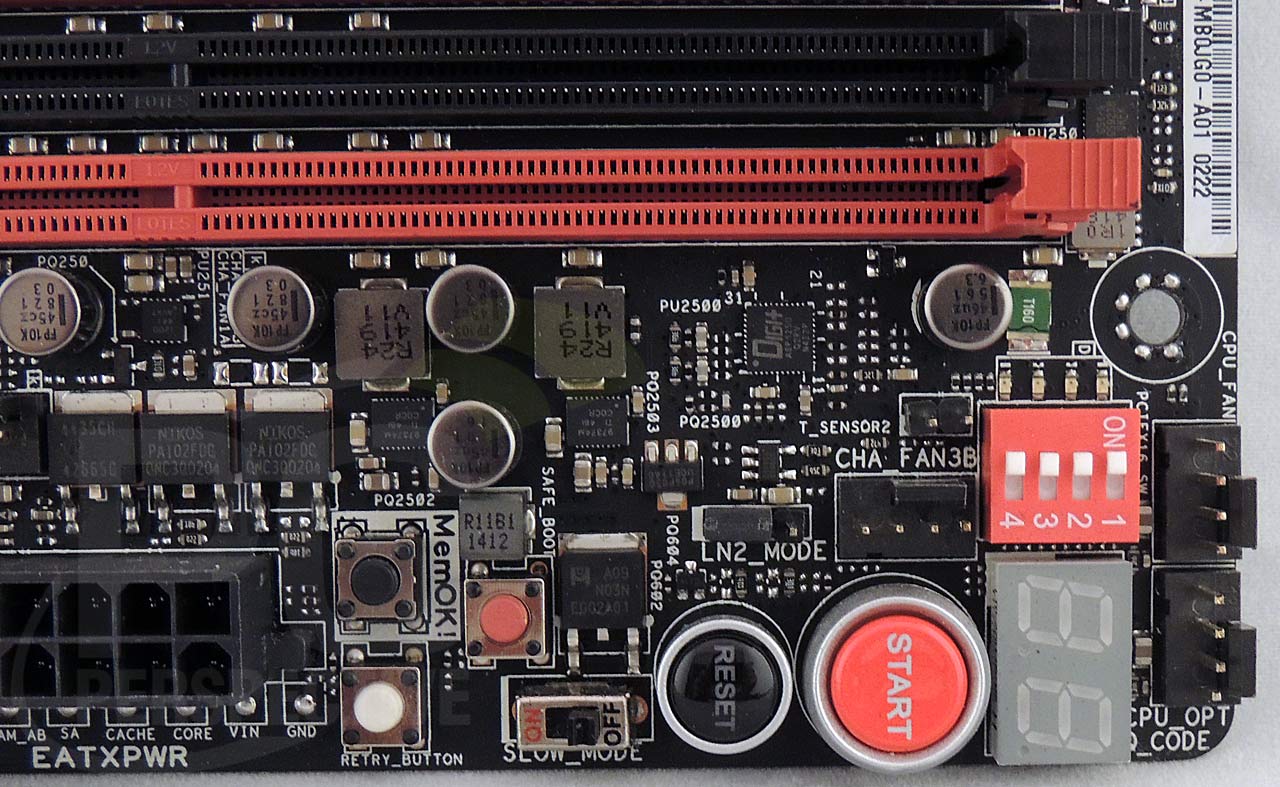 To the lower right of the lower set of DIMM slots are a 4-pin system fan header, a temperature sensor header, the power, reset, MemOK!, ReTry, and Safe Boot buttons, the PCIe lane switch block, the 2-digit diagnostic display, the LN2 Mode jumper, the Slow Mode switch, and dual CPU fan headers. The 2-digit diagnostic display can be used for debugging system issues during system initialization. The displayed debug codes can be decoded using the table from the motherboard manual. The ReTry button can be used to attempt system reboot that locked up during the initialization process, while retaining the previously set UEFI settings. The Safe Boot button forces a system reboot, enacting a direct to UEFI boot using factory set "safe" settings while retaining the previous settings in the UEFI pages for modification. The MemOK! button can be used to reset memory-related BIOS settings to defaults, useful when the system doesn't boot because of memory options set over-aggressively.

For sub-zero enthusiasts, ASUS integrated key functions into the board's design to aid in getting the best performance possible. The LN2 Mode jumper enables a cold bug fix that can be encountered when attempting to boot a CPU at sub-zero temperatures. The Slow Mode switch can be used to automatically slow the system boot process and CPU frequency to help prevent system crashing at extreme cooling speeds. The PCIe lane switch block can be used to individually disable the PCI-Express x16 slots. 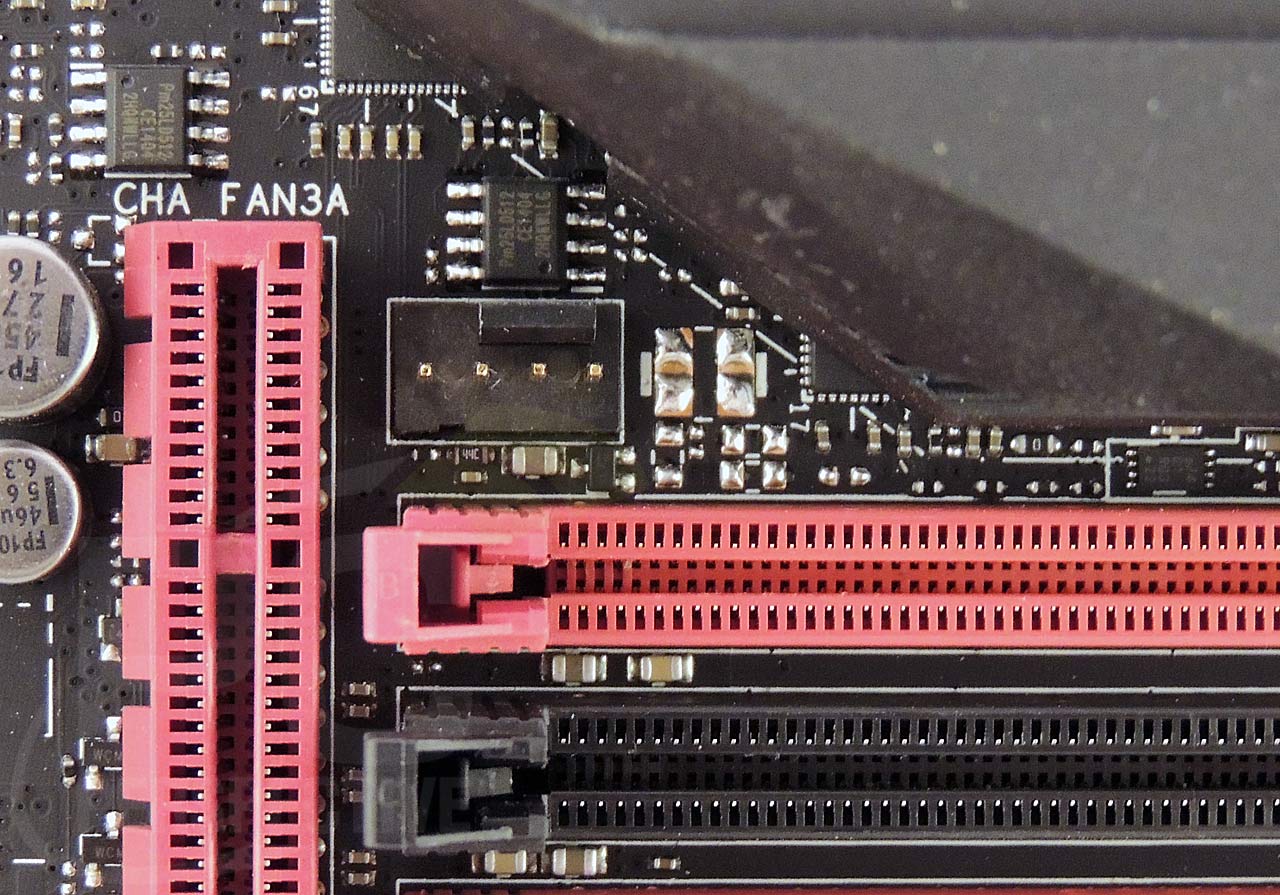 To the upper left of the upper set of DIMM slots are a 4-pin system fan header. 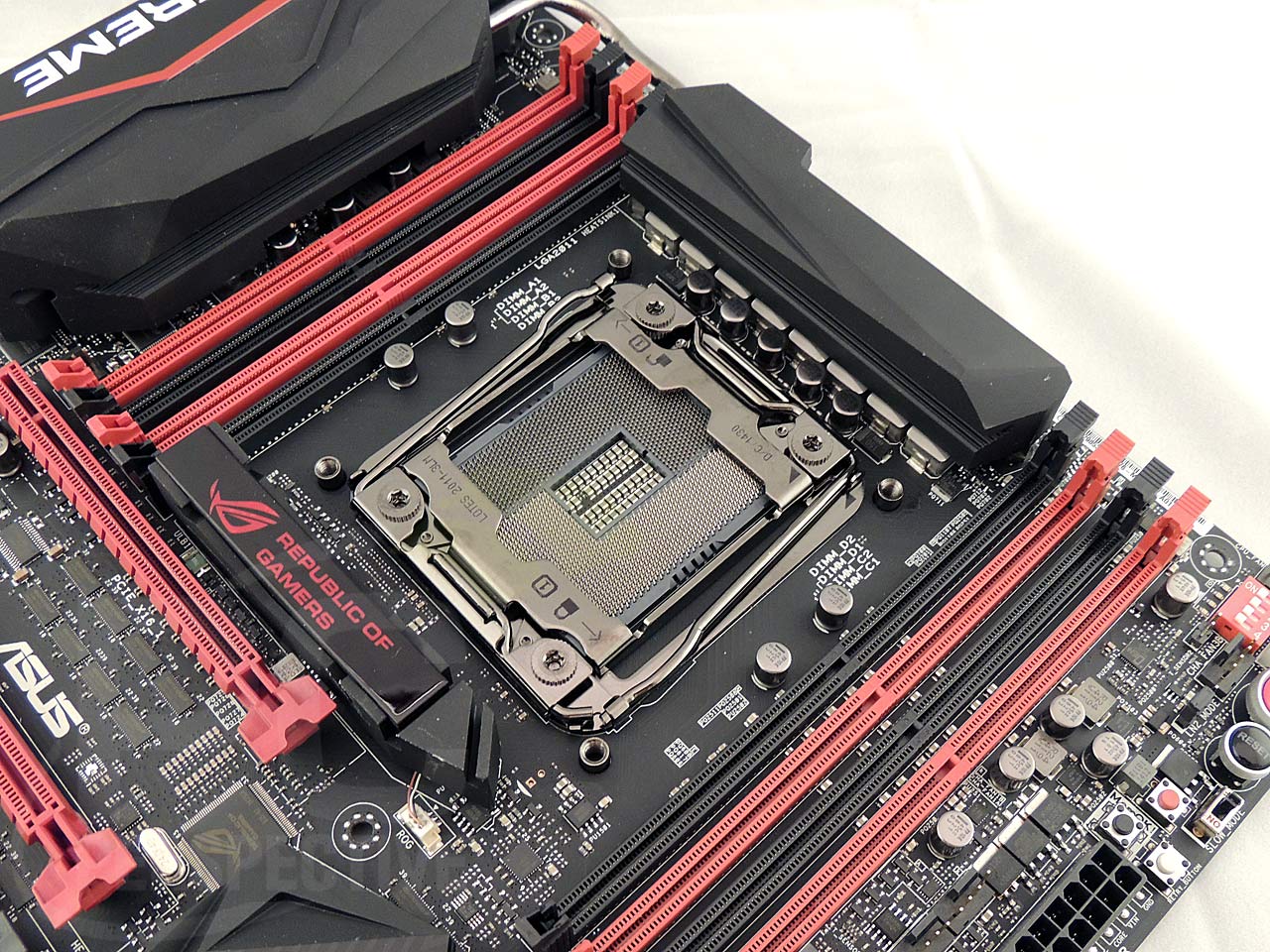 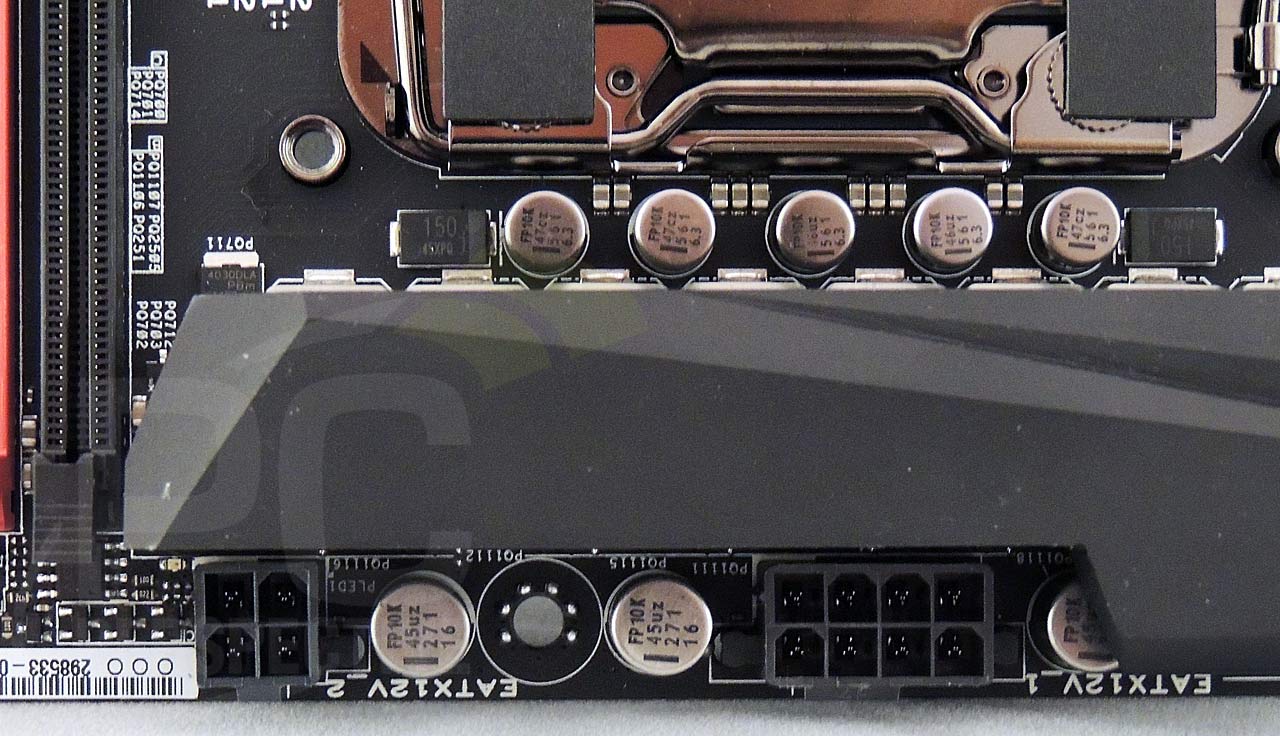