We finally come to the area where this particular board excels.  Maxwell was built from the ground up to be the most efficient architecture on the market in terms of power to performance.  When we take into consideration the performance of this card and its sub 75 watt TDP, it is keeping up with the competition while running on about half the power.  This most certainly is not a power user card, but it is extremely cool running and power efficient. 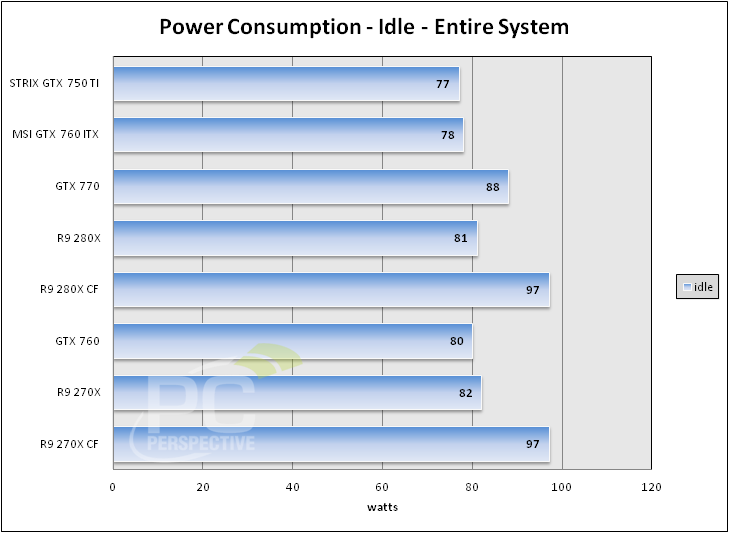 Idle draw is pretty similar for all of the boards.  Both AMD and NVIDIA have done very well in getting idle power down to extremely low levels for most desktop usage. 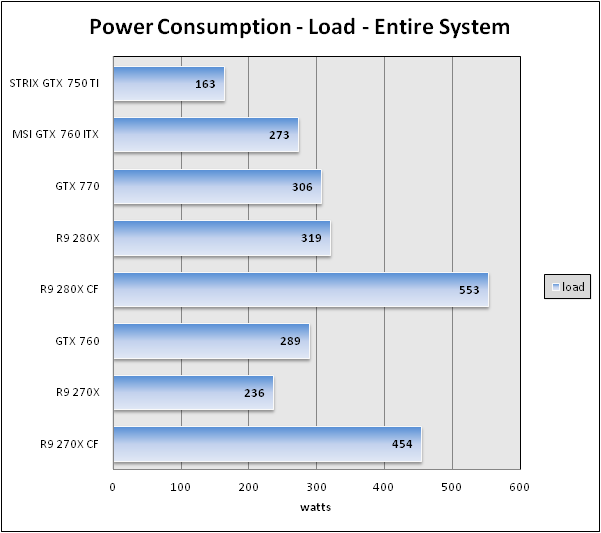 When we crank things up a bit, the landscape changes dramatically.  The STRIX card is by far the lowest power part of the group, and is an impressive 70 watts lower than the competing R9 270X.  It is also a full 100 watts less than the GTX 760 that is based on the Kepler architecture, which is the most suprising aspect to me.

The STRIX design is aimed at providing a good cooling solution that makes very little sound.  Fan noise is not an issue with this card, even when overclocked and running in a warm room.  The lowest possible temperatures are not the aim here.  While Asus wants to keep the design under 90C at all times, it is not going for the lowest absolute temperatures with this card. 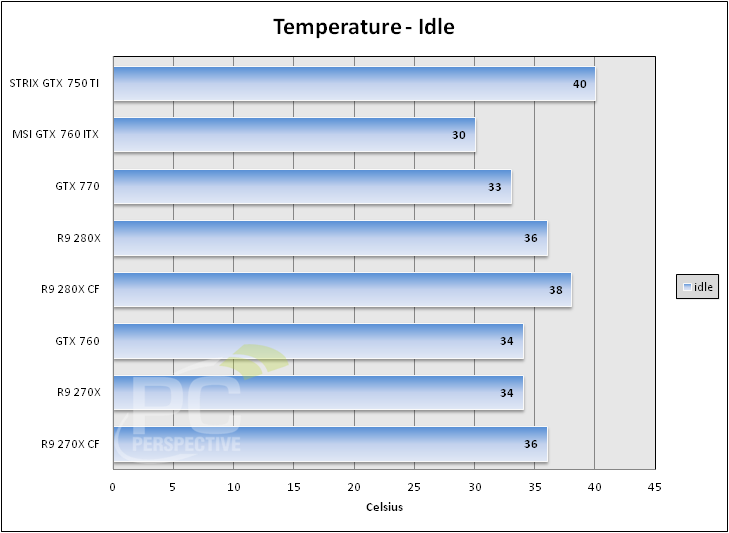 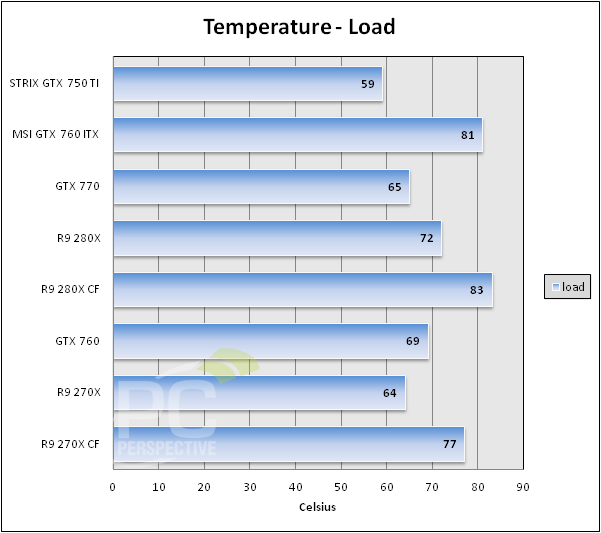 This particular exercise with the latest NVIDIA cards can be a little frustrating due to the card to card variance we see in base clocks.  The STRIX GTX 750 Ti is specified for an 1124 MHz base with a 1202 MHz boost speed.  In reality I saw boost hit 1267 MHz consistently.  I used the Asus GPU Tweak utility to further overclock this card.

Without pushing the voltage up, I was able to get the card to 1402 MHz.  That was as far as the utility would allow me to overclock.  This is a pretty hefty OC for no change in voltage, but it does not really result in a big boost in performance.  Users will get a handful of extra fps by overclocking to this level.  What surprised me most is that the fan still never became audible even when overclocked.

The memory’s stock speed is 5400 MHz effective.  I took the memory slider as far over as it could go and it was able to run without an issue at 5600 MHz.  This is obviously not a very big overclock and it results in a couple extra GB/sec of bandwidth.  The chip is not exactly bandwidth starved due to the inclusion of a much larger L2 cache than the previous Kepler generation had, but memory access is still a hurdle for the card to render above 1080P and be playable.

I tested the overclock with a couple of runs of the Valley benchmark.  It did not crash or show any corruption.  I did see the average frame rate go up from 45.2 to 48.4 fps at 1920 x 1200.  This is less than 10% of an increase in actual performance.  Free performance is nice, but the GTX 750 Ti does not gain all that much when it is overclocked.