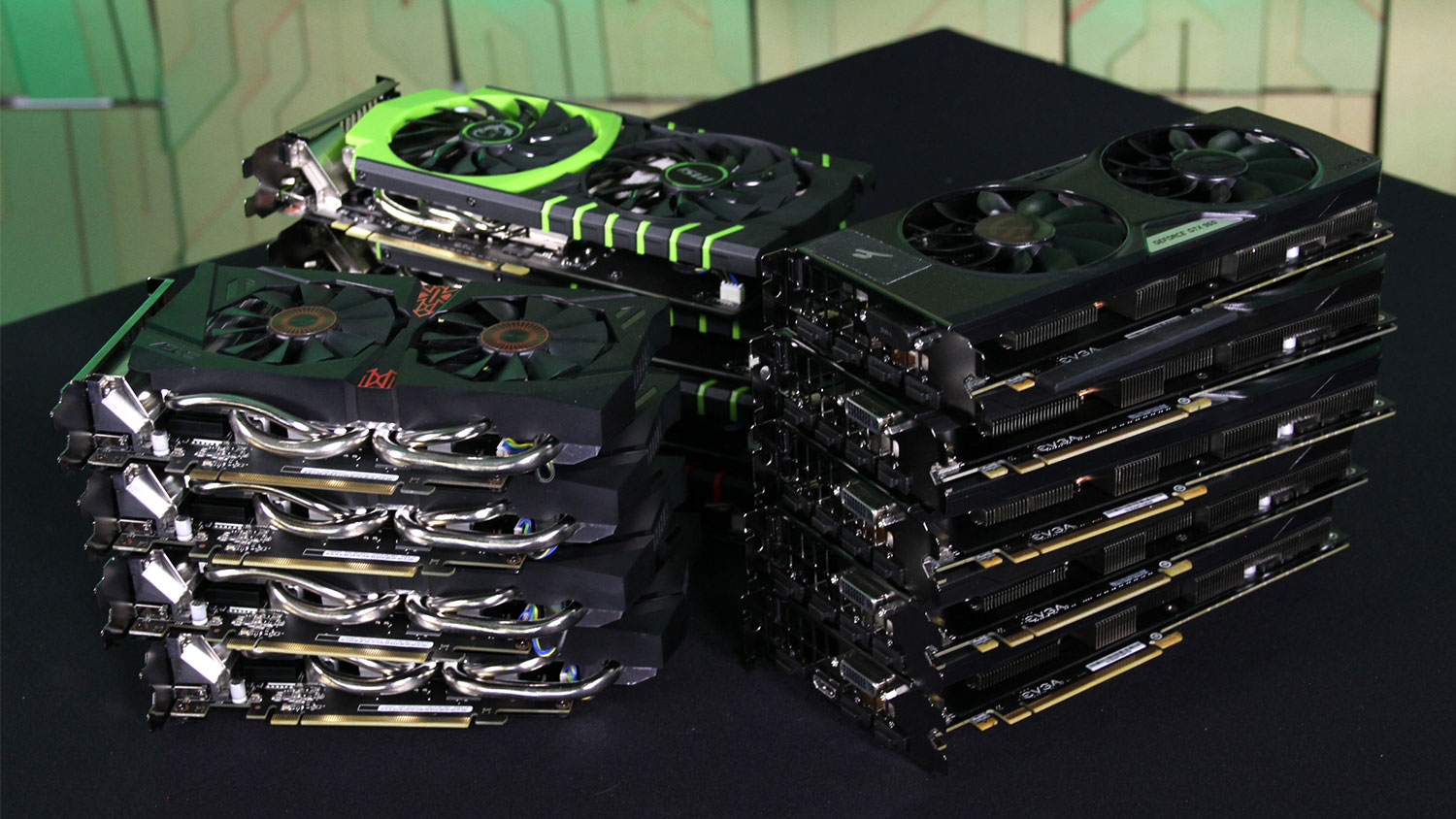 When you have this kind of hardware on hand, you might as well overclock it.

Back on the launch day of the GeForce GTX 960, we hosted NVIDIA's Tom Petersen for a live stream. During the event, NVIDIA and its partners provided ten GTX 960 cards for our live viewers to win which we handed out through about an hour and a half. An interesting idea was proposed during the event – what would happen if we tried to overclock all of the product NVIDIA had brought along to see what the distribution of results looked like? After notifying all the winners of their prizes and asking for permission from each, we started the arduous process of testing and overclocking a total of 13 (10 prizes plus our 3 retail units already in the office) different GTX 960 cards.

Hopefully we will be able to provide a solid base of knowledge for buyers of the GTX 960 that we don't normally have the opportunity to offer: what is the range of overclocking you can expect and what is the average or median result. I think you will find the data interesting.

Our collection of thirteen GTX 960 cards includes a handful from ASUS, EVGA and MSI. The ASUS models are all STRIX models, the EVGA cards are of the SSC variety, and the MSI cards include a single Gaming model and three 100ME. (The only difference between the Gaming and 100ME MSI cards is the color of the cooler.) 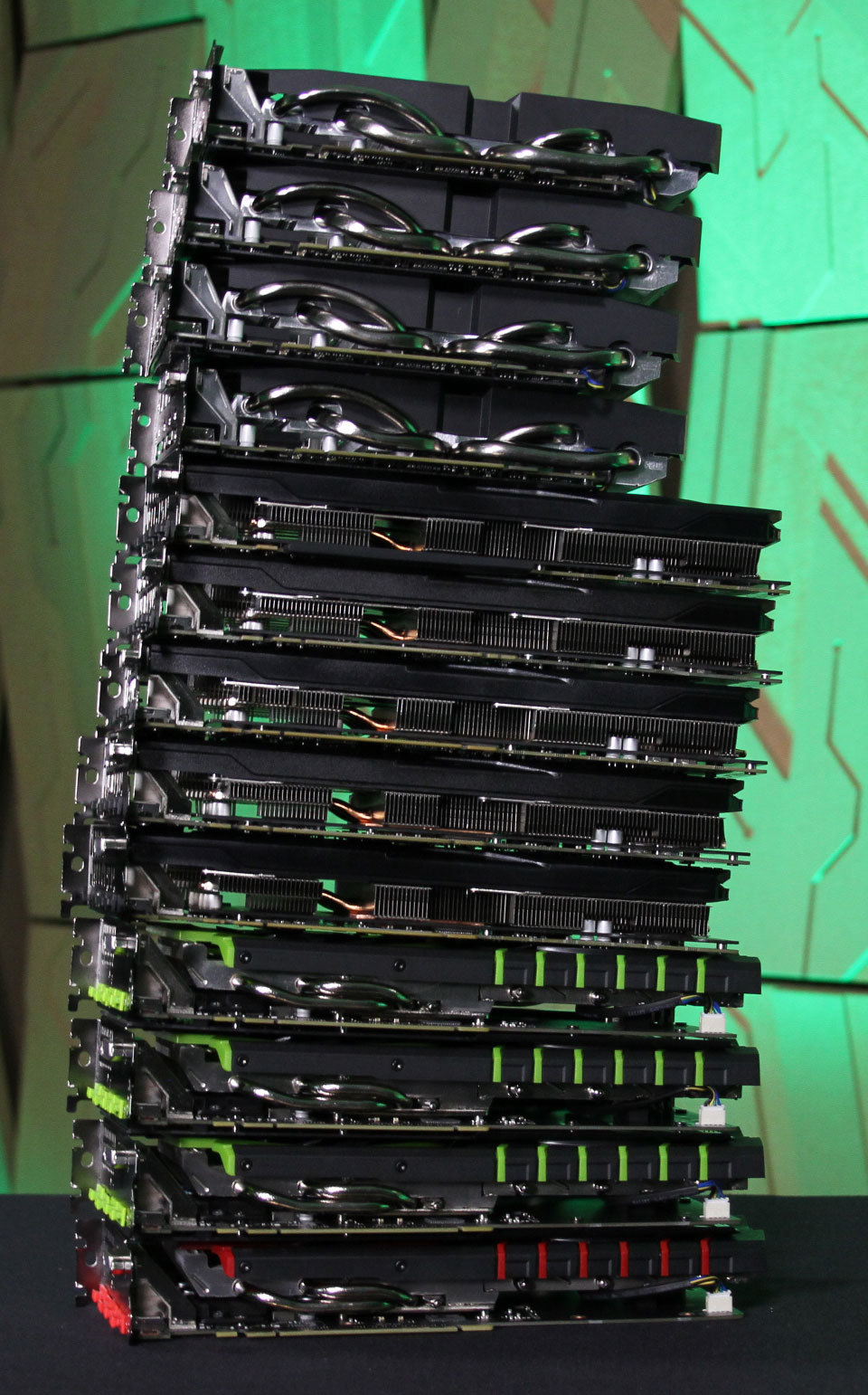 To be fair to the prize winners, I actually assigned each of them a specific graphics card before opening them up and testing them. I didn't want to be accused of favoritism by giving the best overclockers to the best readers!

Our overclocking process was identical for each card. We used EVGA's Precision X to overclock each card to avoid any conflicting issues with different software packages, but we were also assured by all parties (NVIDIA, EVGA, ASUS, MSI) that our software selection should have no effect on the results. In other words, ASUS cards don't necessarily overclock better or worse with ASUS software (and so forth). 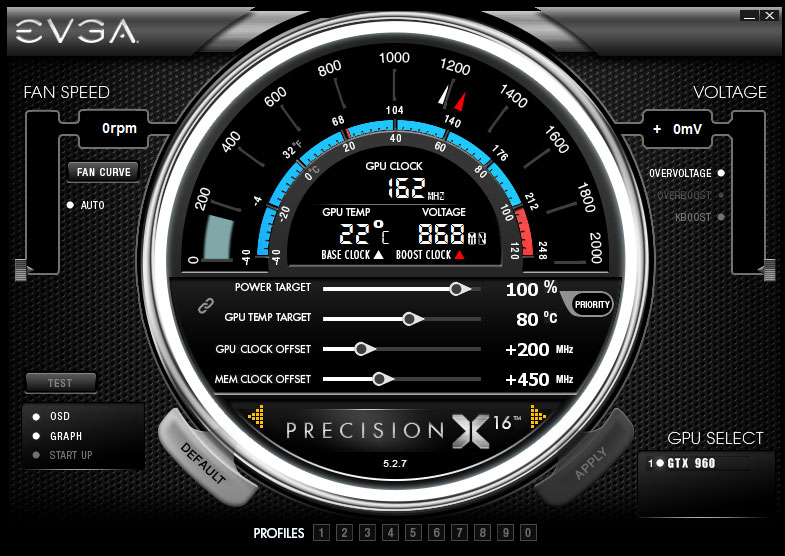 My step by step methods are pretty simple: install the card, starting turning GPU clock up until instability occurs, starting turning memory clock up until instability occurs. Interestingly, because of the power efficiency of the GM206 GPU there was no need to adjust or modify either the power target or GPU temperature target – we never got close to maximizing those in our overclocking at all. Of course I also maximized the memory voltage offset in Precision X as well. (Note that both the EVGA and MSI cards allowed for +100 mV offset while the ASUS STRIX cards only allowed +50 mV.) 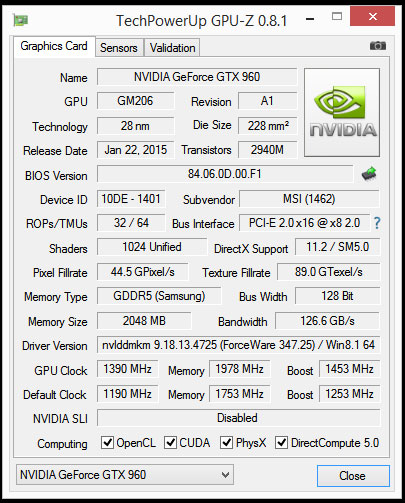 Rather than reporting GPU or memory offset results, our graphs will show the peak frequency that was reached as a result of the offset. Because the three different GTX 960 options have different starting base and Boost clocks, our offsets ranged from +210 MHz down to +140 MHz, though the resulting clock rates are very close. In my testing the GPUs were able to maintain their peak clock rate in perpetuity – they don't seem to waver or bounce around in the way we are used to seeing cards like the GTX 780 do. Hence, we are only reporting a single maximum GPU and memory clock speed for each card.

Our stability testing was done with Metro: Last Light, a demanding PC game that quickly allows us to enter a repeating benchmark mode. To be deemed "stable", the test run had to complete five complete iterations, which is equivalent to about 15 minutes of game time. Obviously, to be 100% sure of the stability of any overclock, you should burn-in each card for a longer period of time, but the task of getting through 13 cards forced us to lower it down to something more reasonable.

After many hours of testing, the results are shown in the two graphs below. First up is the GPU clock rate, sorted by lowest to highest peak overclock. There is a secondary blue line that is overlaid, which shows the peak temperature of the GPU during that overclocked period (with a scale on the right side of the graph). 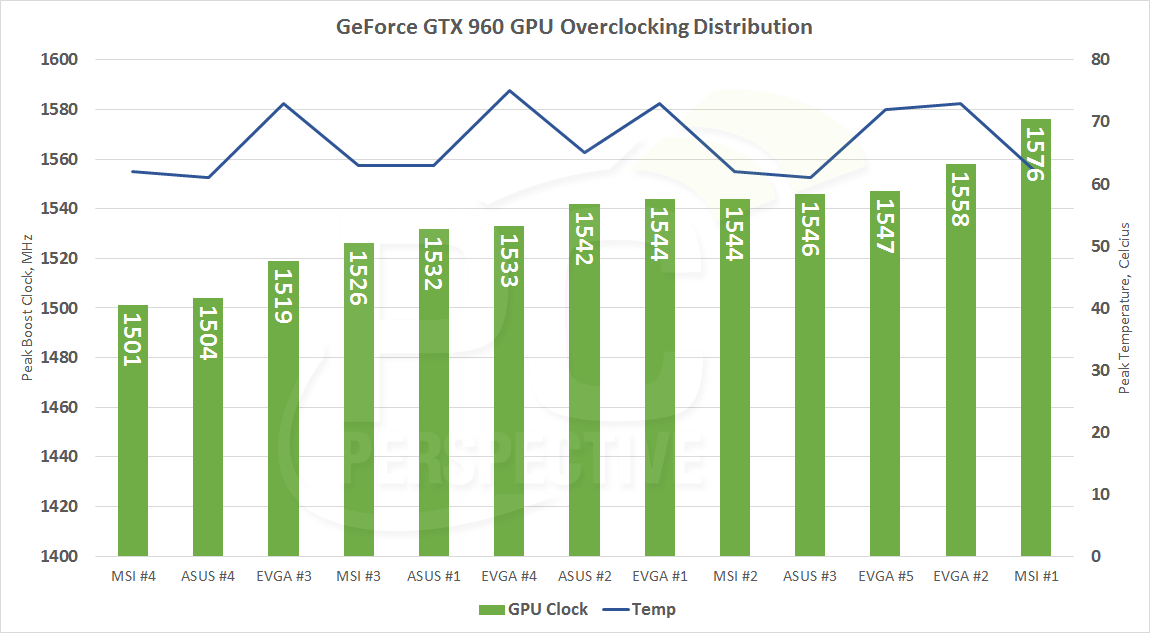 Remember that the reference base clock of the GTX 960 is 1127 MHz and the reference Boost clock is 1178 MHz – that should help put these overclocks in perspective. The worst result in our overclocking testing game with one of the four MSI GTX 960 100ME/Gaming graphics cards, hitting just 1501 MHz. The best result was a 1576 MHz overclock, also from an MSI card, which should show you right away that picking a particular hardware vendor with the hopes of getting the "best" overclocker just isn't the way to think about it.

The 1576 MHz result is also the biggest outlier – it differs from its immediate neighbor by 18 MHz. The next largest gap we see in consecutive results is 15 MHz, going from 1504 MHz to 1519 MHz on the far left. The median result is 1542 MHz.

Temperatures on the overclocked cards ranged from 61C to 75C with the EVGA SSC card the only one to get above the 70C mark. The coolers from ASUS and MSI are definitely doing a better job of keeping the GPU cool, but there is absolutely nothing wrong with the 75C level that EVGA reaches. That temperature is a good margin away from the 80C target that NVIDIA defaults to. 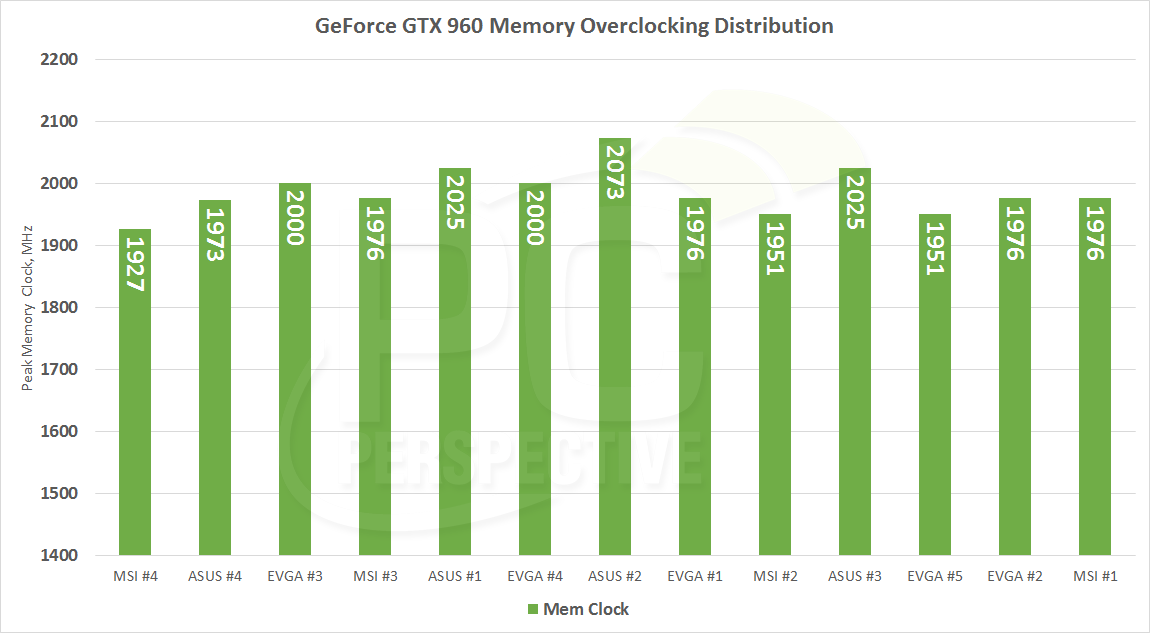 Our memory results aren't sorted independently but, instead, follow the exact same ordering as the GPU results above. This allows you to see if there is any correlation between maximum GPU clock and maximum memory clock – and the answer is clearly no. Our highest memory overclock is 2073 MHz, or actually 8.292 GHz effective rate! That's well above the 7.0 GHz reference rate but the card that achieved that was only able to hit the 1542 MHz GPU clock. On the other hand, the top GPU clock card, MSI #1, only hit 1976 MHz for memory speeds.

How does this kind of overclocking change the gaming experience of using the GeForce GTX 960? To find out we compared our top overclocked card at 1576 MHz peak GPU clock and 1976 MHz peak memory clock to the retail ASUS GTX 960 card that is already pre-overclocked out of the box. Without changing settings, the ASUS STRIX card hits a peak GPU clock of 1404 MHz and a peak memory clock of 1800 MHz. 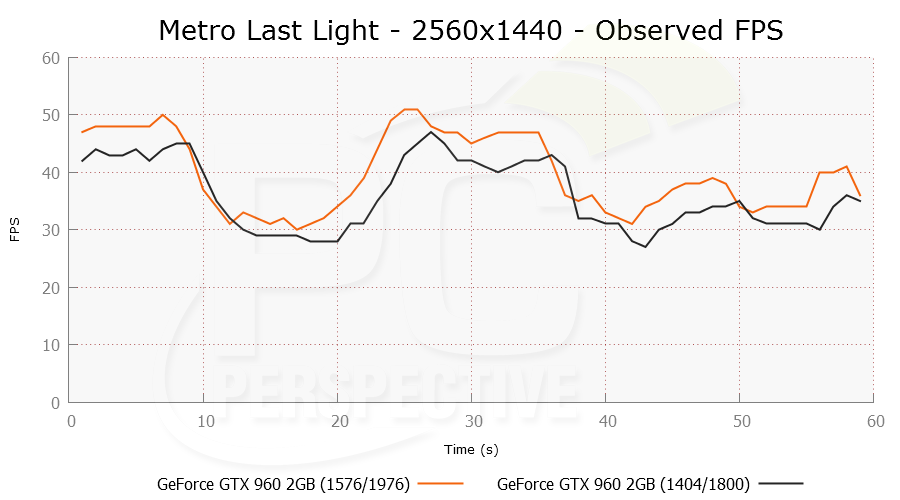 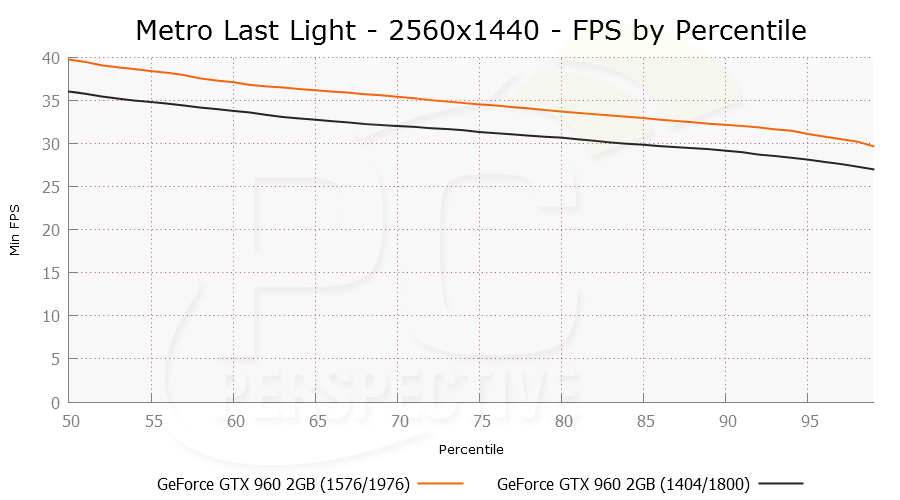 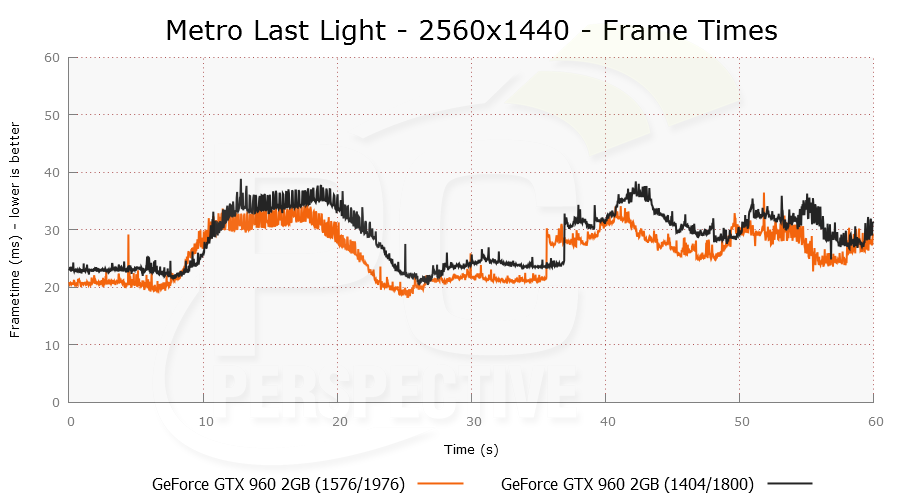 Though our testing group is only 13 different GTX 960 cards, it is likely a bigger sample size than just about any other outside source, excluding companies like NVIDIA, ASUS, EVGA and MSI. My findings indicate that there is as pretty wide margin of overclocking capability in the GM206 GPU, ranging from 1501 MHz to 1576 MHz sustained Boost clock. That gap of 75 MHz is approximately 5% of the median clock speed of 1542 MHz. How that compares to other graphics cards, like the GTX 980 or GTX 970, is hard to say as we didn't have nearly the quantity of those products to test. 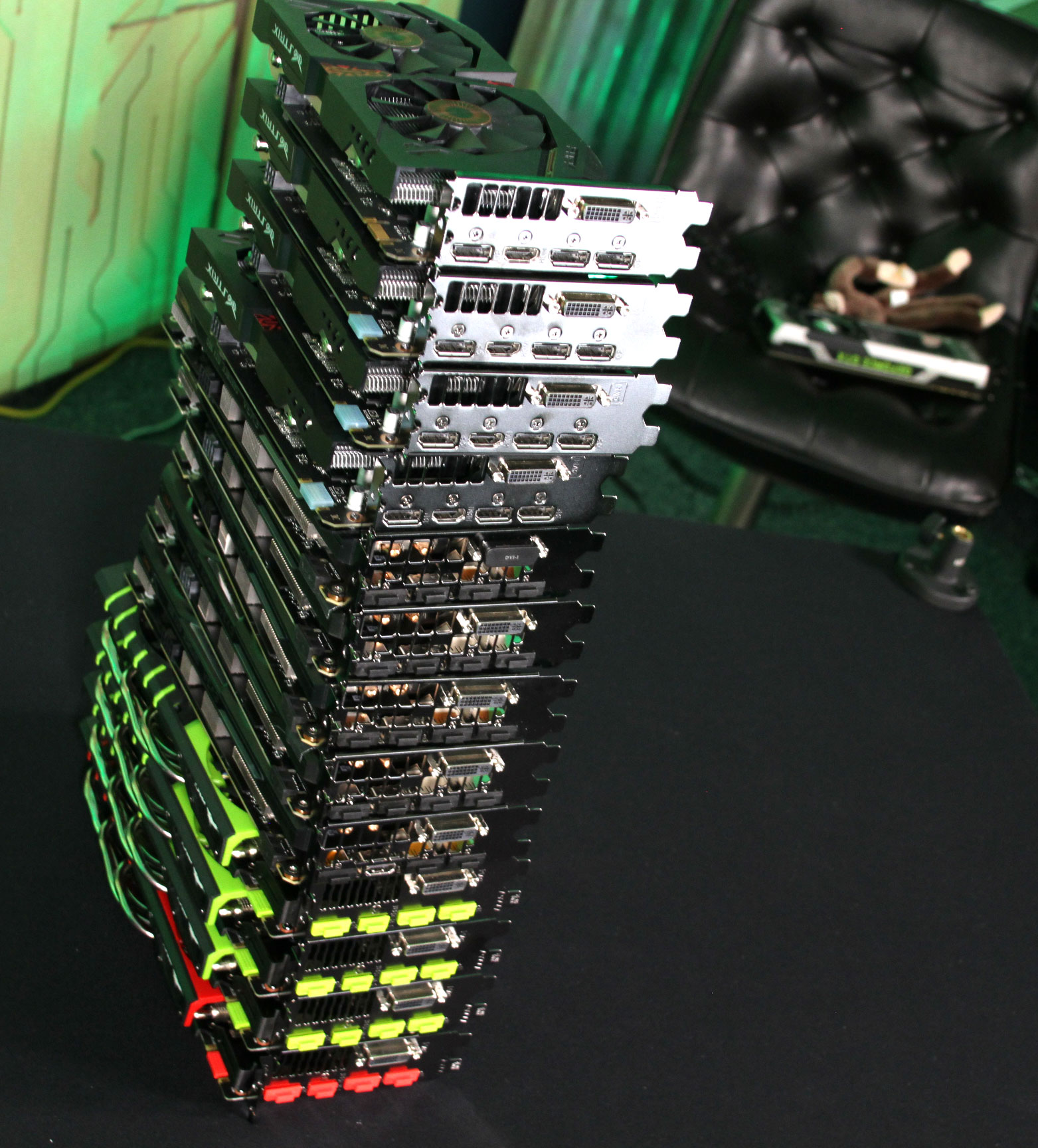 Woot monkey supervises from the chair

As is always the case, overclocking capability is never guaranteed by the card vendor. Just because you get a product that is only hitting around 1500 MHz does not make it a warranty concern. But at least now you know where your own GTX 960 card sits based on our days of testing.

There are also a couple of interesting closing facts for you to consider. First, the 1576 MHz maximum Boost clock is 33.7% faster than the "typical" Boost clock of 1178 MHz on the reference GTX 960 specifications. That is really impressive but, at the same time, makes me wonder why NVIDIA would consistently leave that much performance on the table. Ostensibly, it is to allow board partners to differentiate in coolers and performance, but it might have benefited NVIDIA in the initial comparison to AMD's Radeon R9 285.

Second, I did notice an interesting phenomenon around the GPU clock offset and chip to chip clock results. Even from the exact same graphics card models, setting a specific GPU clock offset does not result in similar frequencies. For example, with our five different EVGA GTX 960 SSC cards, with a GPU offset of +90 MHz, the resulting peak Boost clock speeds were 1544 MHz, 1558 MHz, 1519 MHz, 1533 MHz and 1507 MHz. But that did not indicate where the final stable overclocked speed would sit. One card would reach as high as 1547 MHz (with a +130 MHz offset) while others would find the +90 mark to be their limit. Essentially, the GPU offset is a rather useless metric for comparing card clock rates, even among identical products.

I hope you find these GTX 960 overclocking results interesting. Maybe, we'll be able to use this story to show manufacturers the benefits of getting a large collection of identical products going forward. This might be the first time I have been able to show overclocking output I can be confident about – single CPU or GPU results are far less useful.