Low power consumption is not as crucial of a feature in a small form factor PC, which is always plugged in, as it would be for a new notebook based on Broadwell. Still, it is interesting to look at (if only to compare architectures). 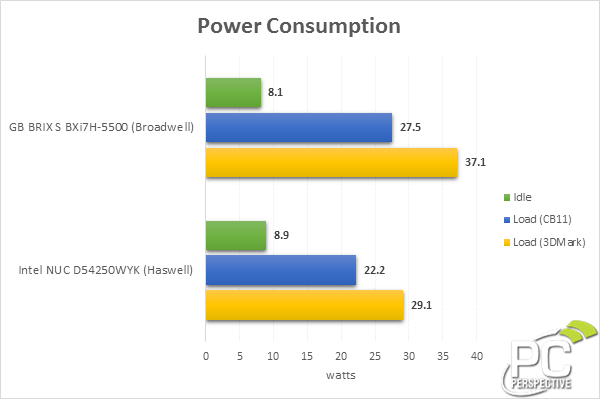 It's not overly surprising that the Broadwell-based Gigabyte BRIX S is using more power than the Intel NUC based on Haswell. On the last page, we saw that the BRIX held a significant lead in performance, and that needs to come from somewhere. At idle, the BRIX uses 0.8 watts less power but, under both our CPU load test and our GPU load test, it consumes 5-8 watts more. That's a considerable amount actually, based on the 15 watt TDP of both processors, but I will be waiting for our Broadwell Intel NUC to make a definite statement on power consumption.

For now, let's assume that the BRIX uses a bit more power than the Haswell-based SFF boxes we have in-house today.

Unlike the BRIX Pro that I tested last year, the BRIX S powered by Broadwell is pretty damn quiet – the small blower fan inside the system was never more than slightly audible even sitting on the desk right next to me. I am also speaking of running some gaming tests that stress both the CPU and GPU portion of the chip. I see no reason why you wouldn't be able to keep this box on your desk next to your monitor in a standard office or home environment.

The Broadwell architecture and the Core i7-5500U inside our tested Gigabyte BRIX S proved to be very competent performers in both our CPU-based and GPU-based testing. In both single threaded and multi-threaded applications and testing, our results show an advantage ranging from 10% to 40% depending on the application. The average result is somewhere in the 25-30% range, which is a sizeable increase over the Haswell Intel NUC from late 2013. If you found the performance of previous hardware combinations somewhat lacking for certain tasks, like photo editing or even very large Excel files, then I think the Broadwell swap will make things noticeably peppier.

Graphics performance is solid as well. The Intel HD Graphics 5500 hardware is able to power through our 3DMark suite of tests and it is not only better than the Haswell parts, but it is also on par with the 2012 Trinity APU that has an 85 watt higher TDP! Of course we threw on some games like Portal 2, DOTA 2, and League of Legends, and they played without any issues. Trying to get into something like Crysis 3 or Metro: Last Light is going to be a stretch though; integrated graphics still struggle with today's triple-A gaming titles.

The retail price for the new Gigabyte BXi7H-5500 bare bones unit is $509, a bit higher than I would have expected but not entirely out of line with the previous generations that ranged from $400-500. The BRIX Pro with Iris graphics from the Haswell generation is still currently available, and it sells for $650.

Here is the pricing breakdown for our entire assembled test system:

It continues to be the case that these NUC-sized, small form factor designs are NOT a bargain user's dream. Despite the small size, these PCs can get quite expensive, especially if you combine a larger mSATA SSD with a standard hard drive in the 2.5-in bay for a larger storage options. At just under $800 for our configuration, you could build a decent standard ATX size computer for a similar amount that would offer better overall performance and include a discrete GPU to enable 1080p gaming as well.

But device like the Gigabyte BRIX S aren't competing directly with those configurations, or at least they aren't yet. Instead, they target a user that wants to put a full-power PC in an area that offers very little physical space. Multi-user work environments, dorms, home theaters, on VESA mounts - these are the real targets of the Gigabyte's mini-PC platform.

UPDATE 2/5/15: Gigabyte informed me that due to delays typical with Chinese New Year, the new Broadwell based versions of the BRIX will be available in retail in late February / early March.

Despite the cost concerns, I definitely think that small PCs like the Gigabyte BRIX and the Intel NUC are catching on with consumers that just need a machine for everyday computing. Fitting a complete PC in the palm of your hand, with I/O connectivity to enable a nearly seamless PC-like experience, is impressive technologically. It has also enabled a new kind of development and user integration options that have only been possible with lower performance hardware. It is now possible to take the latest 14nm Intel architecture and mount to the back of your monitor, creating your own all-in-one design while having easier access to hardware and upgrading options.

The BRIX S that I tested in this review has a lot to offer as well. The performance is fantastic, as I discussed above, and it should be able to address nearly any usage model save for video editing and gaming. Intel's new Broadwell architecture is responsible for a lot of that but Gigabyte deserves credit for including the key input and output features like USB 3.0 and HDMI/DisplayPort. Form factor changes are minimal from previous years - I'd like to see someone take some chances in that regard to make something other than just cube-shaped chassis.

I'm eager to see both what Intel's own NUC offers in relation to this BRIX S, and I would also like to see what Gigabyte might do with Maxwell discrete mobile graphics as well. With the lower power consumption and improved energy efficiency of that GPU architecture, it is possible that they might actually be able to build a small form factor gaming machine that doesn't have the issues that previous models endured. 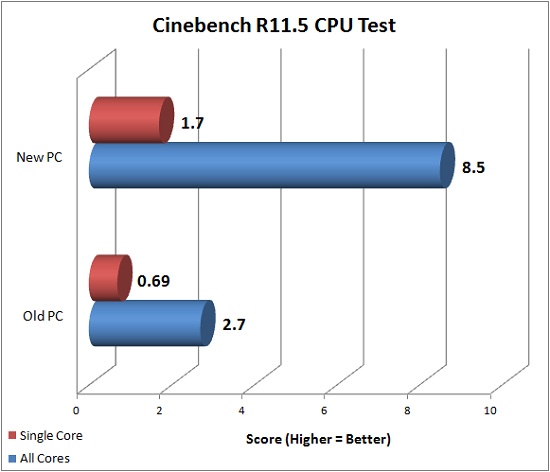 Going from Kentsfield to Haswell, can you see the difference?