If you want to talk about first impressions, nothing beats the first time you look at the display on the Dell Venue 8 7000. With a 2560×1600 resolution on an OLED screen that just oozes color, you first look at this tablet is going to be positive. The default home screen is a good mix of light and dark colors, featuring a long exposure photo of a bridge at night, the high contrast values are immediately apparent.

Though more expensive, the benefits of OLED screens are dramatic and immediate to anyone that used them. First, OLED screens can be built thinner and lighter than traditional LCD screens thanks to the lack of a necessary backlight. This also means that blacks and dark colors appear exceptionally dark as the pixels are completely “off” when not lit. As a result, OLED screens have much higher contrast ratios (difference between white and black colors) than current LCDs, regardless of which kind of backlight they use. 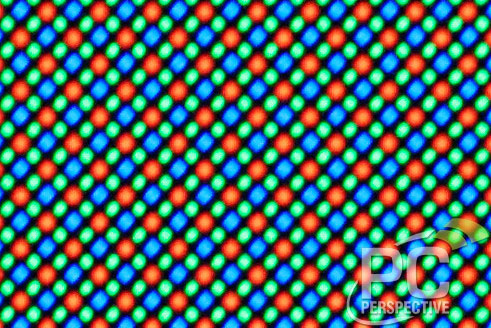 We were able to nab this extreme close up of the subpixel pattern on the Dell Venue 8 7000 which clearly shows the unique traits of this OLED implementation. There are twice as many green dots as red or blue, which actually matches up with the color reproduction data we are showing you below and my own experiences of extremely vibrant greens. This is done for several reasons including lifetime equalization of the subpixels (blue tends to deteriorate first). 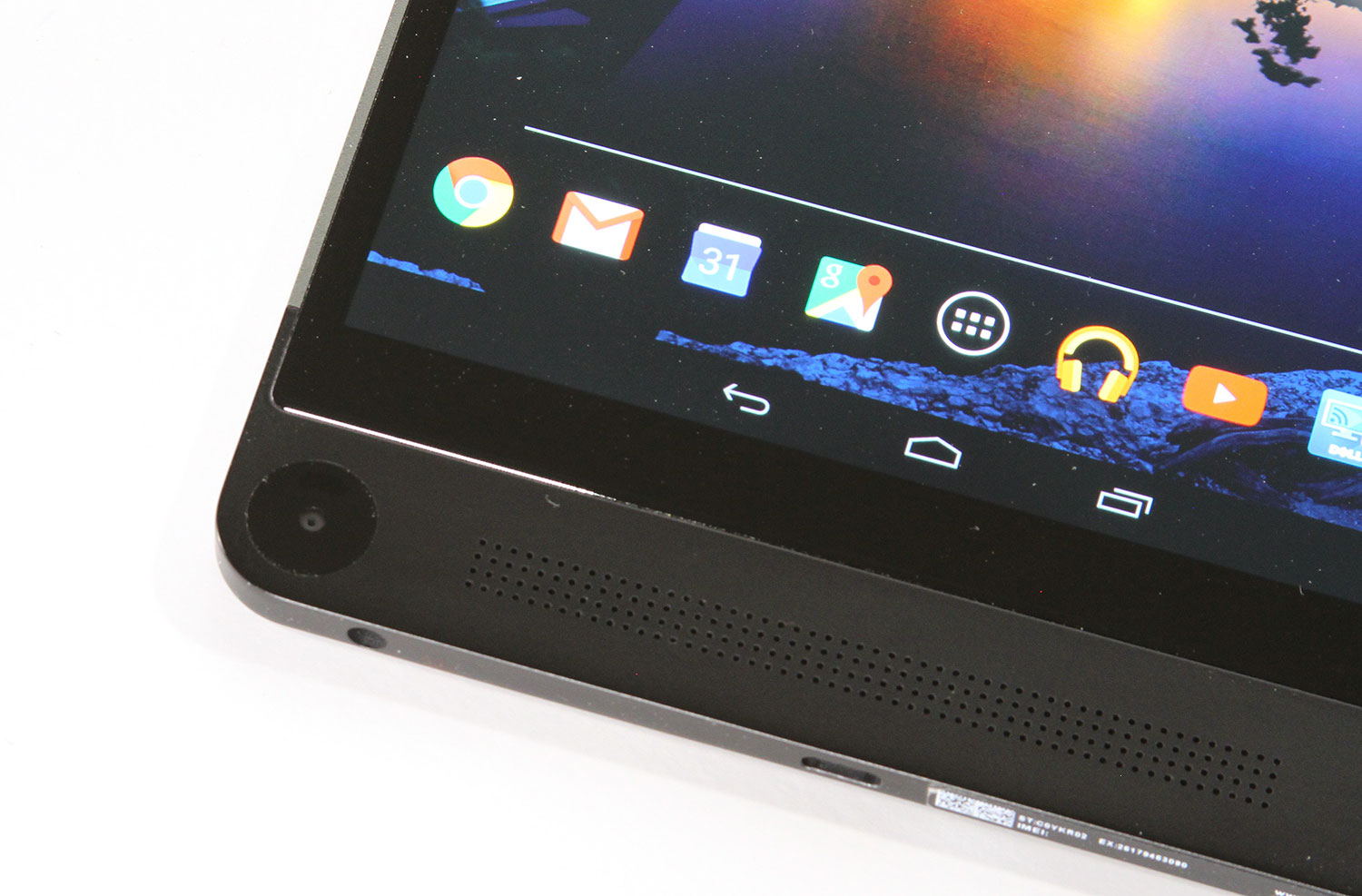 Color reproduction on this OLED screen is outstanding, extending past the sRGB standard in all direction.

Our screen testing was done with HCFR and a Spyder 4 colorimeter, with all displays standardized at 180 lux brightness.

There are some users and those in the professional community that will correctly claim that going above the sRGB spec can cause accuracy issues with some visuals and that is 100% true. But the screen on the Venue 8 7000 extends color range without adding any kind of blown-out or candy-coated look to games, photos or video. If anything, the colors look brighter and more vibrant than any other display I have looked at. That includes TVs, desktop monitors, etc.

The 2560x1660 resolution of the screen presents both positive and negative attributes. For viewing of online content, reading text and watching video, the Dell Venue 8 7000 shows text in an incredibly sharp format and you’ll be able to view the desktop versions of most websites without visual anomaly. Even 1080p YouTube videos scaled up 25x16 are sharp and clear – the video processing is excellent on the Atom Z3580. However, that resolution also means that the PowerVR G6430 graphics core has to handle more than 4 million pixels and for gaming that is a lot of overhead to deal with. Games that are strenuous on mobile GPUs like Hearthstone or Goat Simulator will see reduced performance because of the resolution being rendered. Still, even with the aforementioned Goat Simulator, we were able to produce average frame rates of 34 FPS during an extended play session. Most Android games will still play well on the Atom Z3580 processor, but it is worth keeping in mind the tradeoff that had to be made to get this screen implemented.

Many tablet users (as well as phone and notebook users) are concerned about the maximum brightness of the embedded screens. Thanks to the OLED screen on the Dell Venue 8 7000 you can expect to find very bright light colors and incredibly dim dark colors. 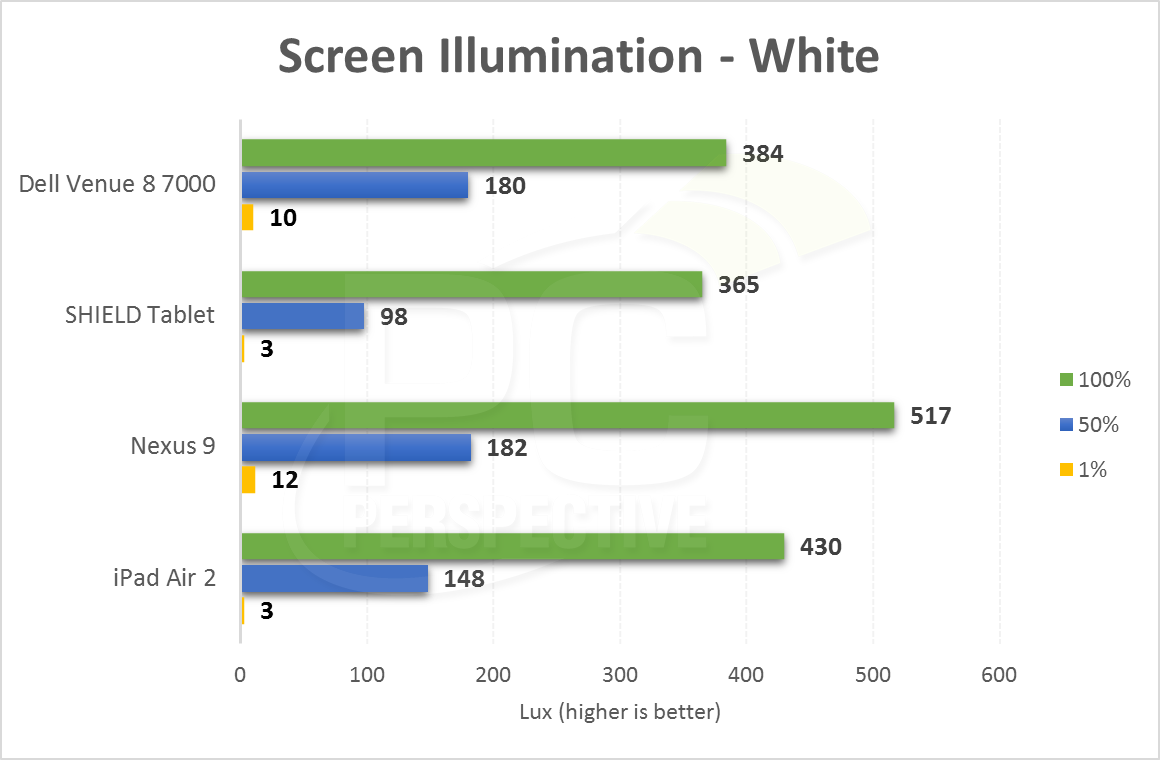 To get the measurements above we used our light meter and tested the four tablets at 100% brightness settings, 50% brightness and the minimum brightness we are calling 1%. For the white levels we used a screen testing application with a full white image. The Dell Venue is able to produce 384 lux of illuminance, bested by the Nexus 9 screen capable of an astounding 517 lux (!) and the iPad Air 2 at 430 lux. The SHIELD Tablet isn't far behind at 365 lux at maximum brightness. At 50% brightness it looks like the Dell tablet is scaling output nearly linearly, producing 180 lux while the SHIELD Tablet drops from 365 lux to 98 lux, a 3.7x drop.

At the minimum brightness setting we did find the Dell Venue 8 7000 outputs the most light at 10 lux; that could be considered a positive for viewing capability at low power settings. 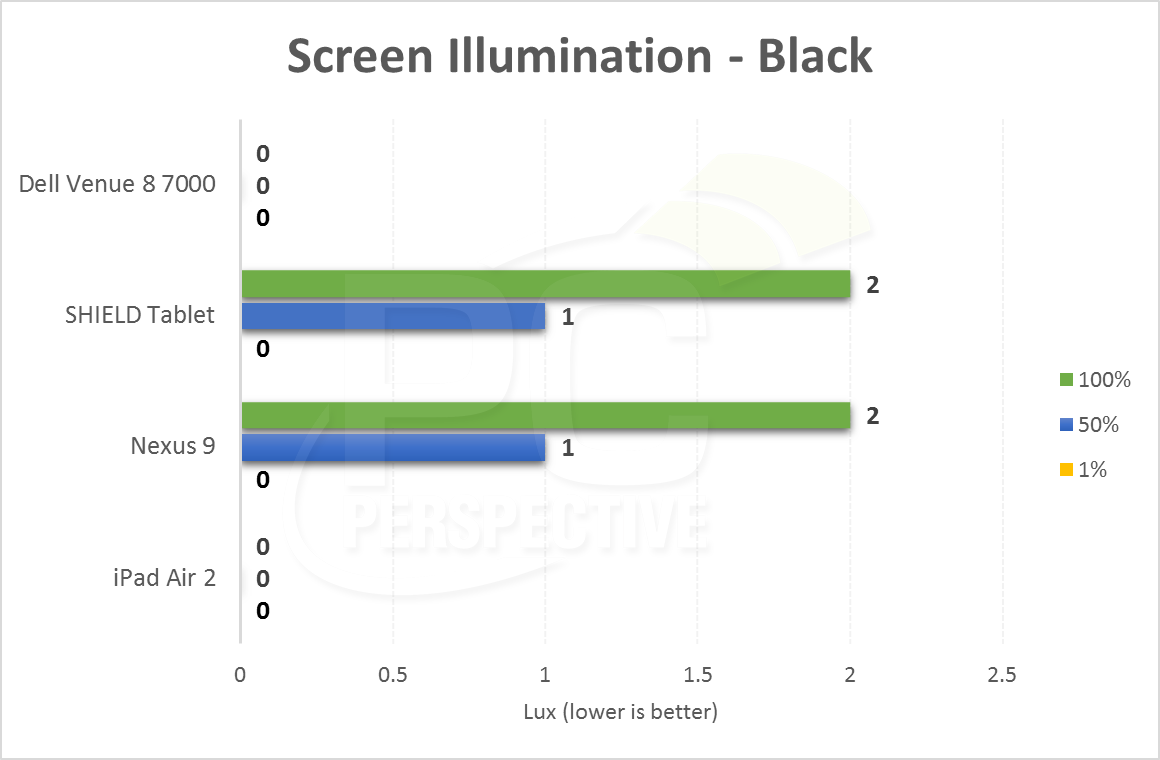 On the opposite side of things is the measurement of light on a full black image. Ideally, you want this to be as low as possible which will result in darker blacks. Both the Dell Venue 8 7000 and the iPad Air 2 output 0 lux of illuminance even at 100% brightness settings. That's damned impressive and Dell should be proud to match a company that brags about its screens on a regular basis. Both the SHIELD Tablet and the Nexus 9 output 2 lux at 100%, 1 lux at 50% and 0 lux at 1% brightness and while a gap of 0-2 lux at 100% might not seem like much the difference is incredibly noticeable. Take your phone today and go to the minimum brightness setting, then just barely tweak it forward - that same change is similar to what we saw comparing the Dell to the SHIELD, for example.

Viewing angles on this screen are pretty good, though we did find an oddity. 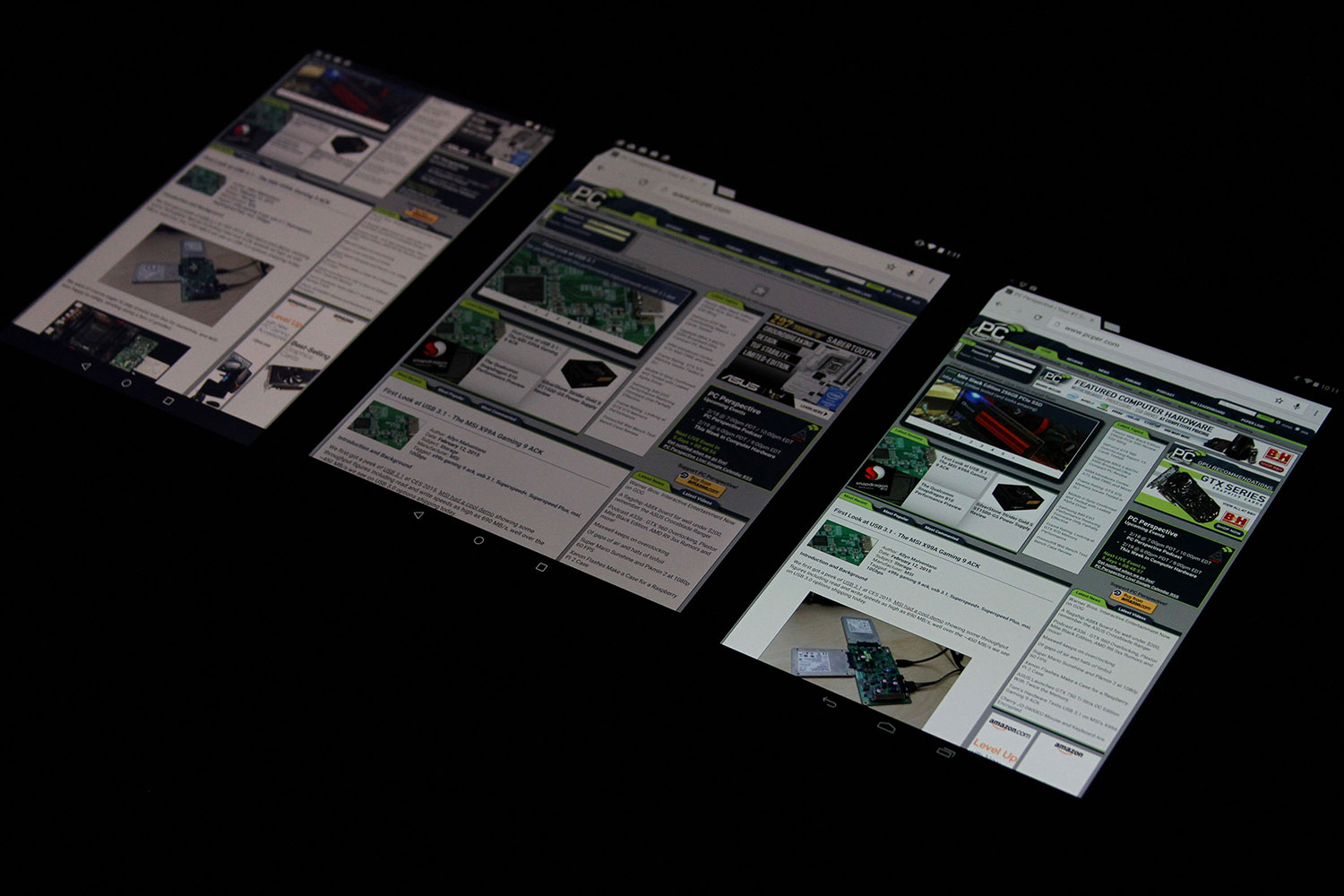 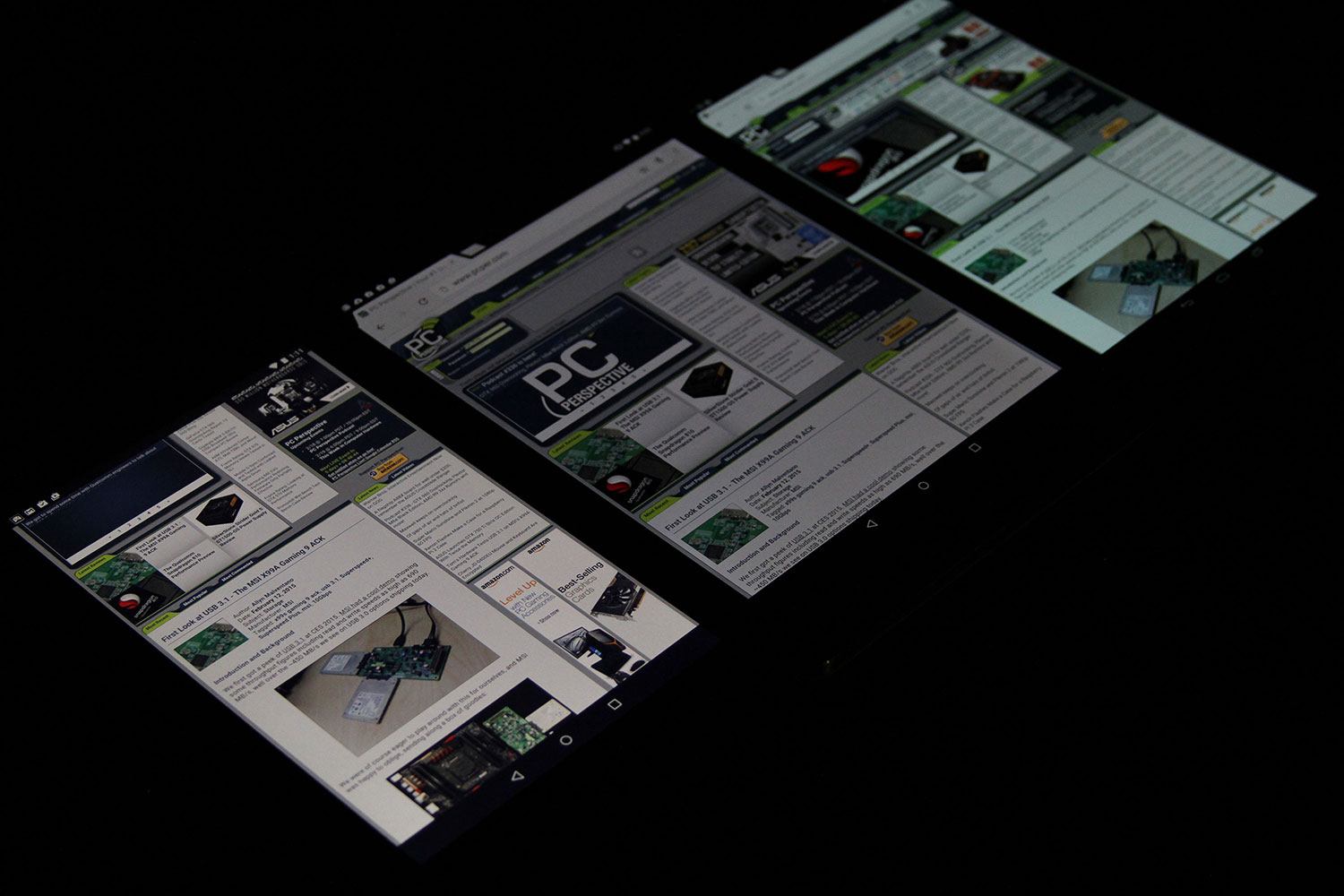 All three displays look pretty good from both angles with very little brightness change or color shifting. The only note worthy thing is the slightly darker tone to the Nexus 9 in the center.

Looking at a very steep bottom angle on the screen the OLED of the Dell Venue 8 7000 shows a color shift towards yellow. It is very unlikely that you will be using a tablet in this position but its worth noting.

To say that I was impressed with the Dell Venue 8 7000’s screen would be a dramatic understatement, clearly. All other tablets will have an uphill battle competing with what now I can call the best mobile screen to grace our offices.