At the end of the day, Qualcomm allowed me some time with the Snapdragon 810 reference platforms – a pair of devices built around the SD 810 SoC to demonstrate the performance features the processor can offer. One of the units was a tablet while the other was a phone, though quite a bit larger to make room for debugging and monitoring hardware connections. The results that I will be presenting here today are from the tablet device, though I did run benchmarks on both units. As it turned out, the scores from the phone and the tablet hardware were essentially identical so doubling up the scores in our graphs was useless.

Qualcomm has several flagship smartphone design wins for the Snapdragon 810, but I was of course wary of comparing the performance numbers from an 810 tablet to those from currently shipping smartphones that have a much smaller space for cooling and heat dissipation. In theory, a larger device should have more space for a heatsink and could scaling to higher clock speeds for longer periods of time than would possible in a phone. Qualcomm has assured me that the devices were configured exactly as if they were integrated into a phone but you should keep that difference in mind as we walk through the next couple of pages.

I will be comparing the Snapdragon 810 to some of the most recently flagship phones and tablets from the Android market and Apple devices. We have the iPad Air 2 and the iPhone 6 to represent the latest from Apple’s A8 processor line, the international Samsung Note 4 with the Exynos octa-core SoC, a couple of Tegra devices and phones using the Snapdragon 805 and 801 parts. 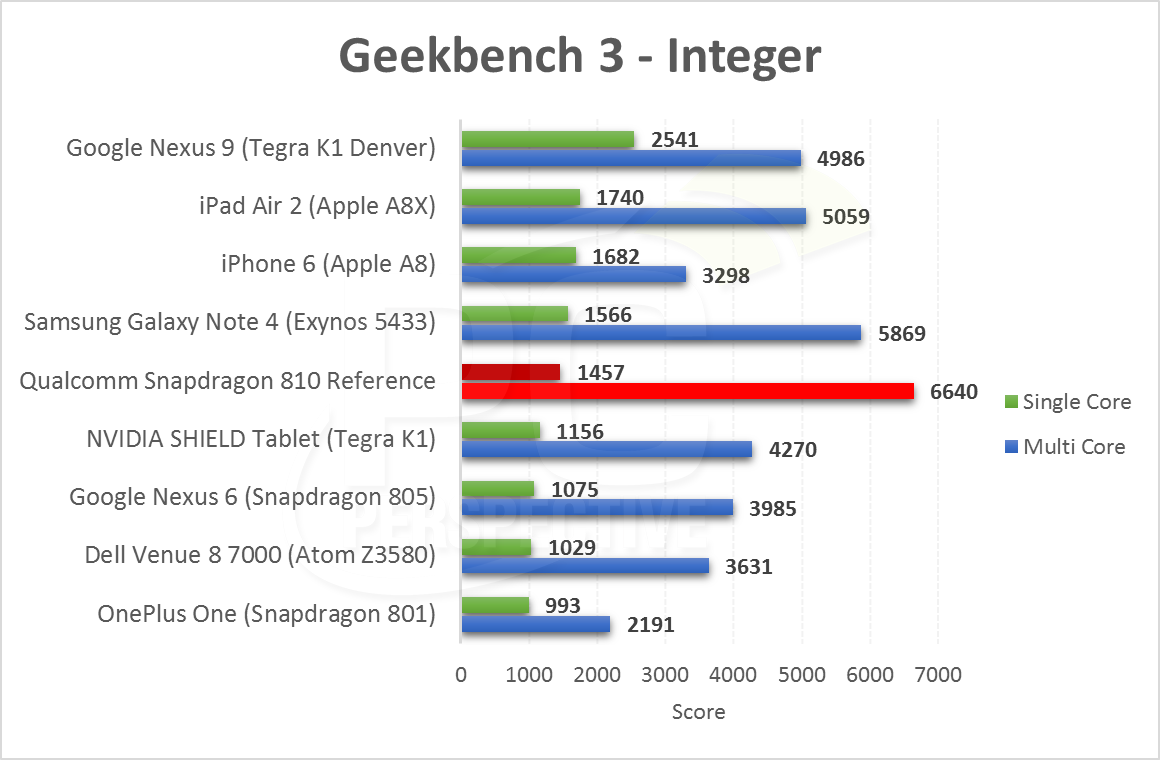 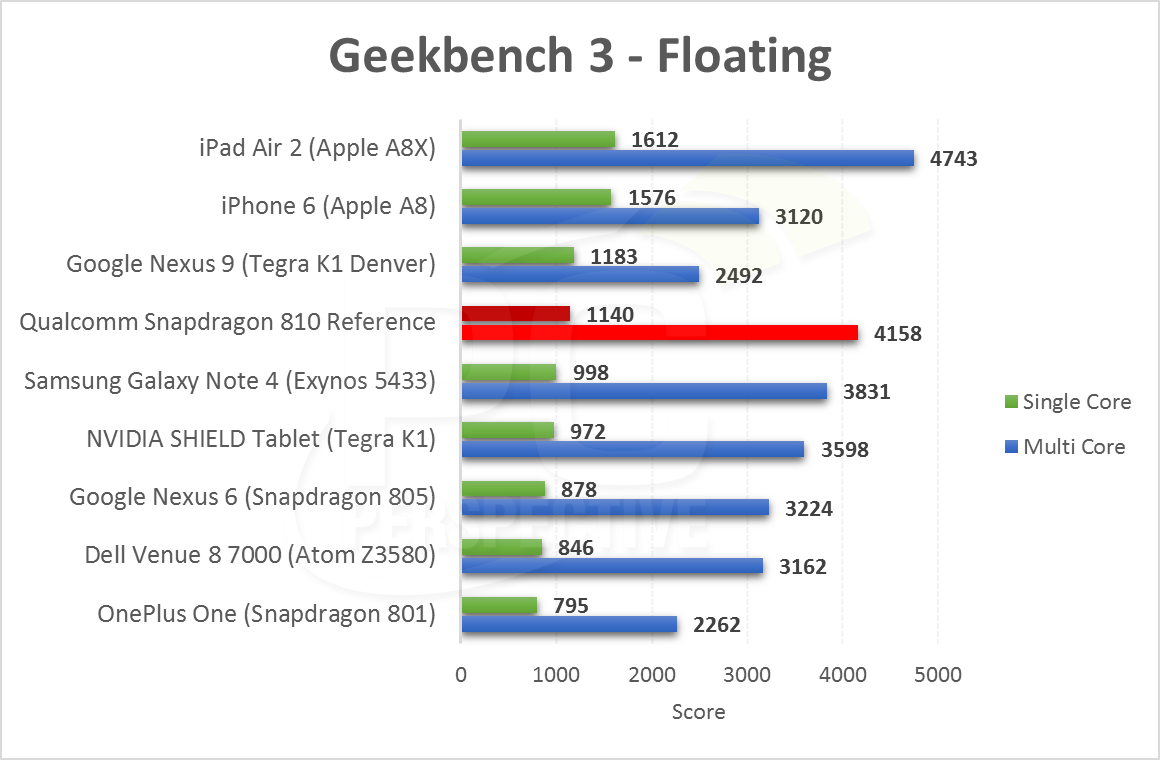 In floating point testing the Snapdragon 810 jumps over the Samsung SoC in both single threaded and multi-threaded results, but still sits behind the Apple A8X, A8 and Tegra K1 Denver. In multi-threaded floating point performance, the A8X comes out ahead even though it only has 3-cores going against the 8-cores of the Snapdragon 810 and Exynos 5433. 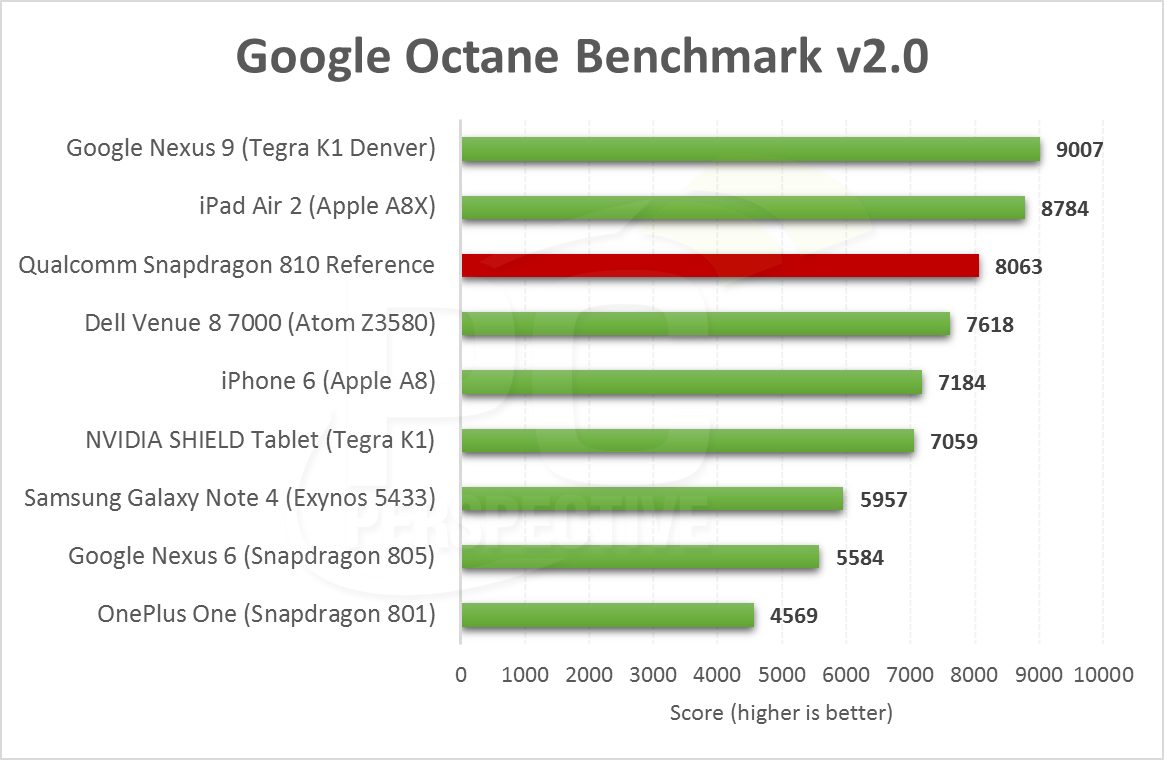 Qualcomm’s Snapdragon 810 performs well in this first of our three browser-based tests with a score of 8063, falling behind on the Apple A8X and the Tegra K1 Denver processors. Interestingly the Galaxy Note 4, with a very similar A57+A53 core design is 35% slower.

Our testing with Mozilla Kraken was done exclusively on the latest version of the Chrome browser on Android. and Safari on iOS. 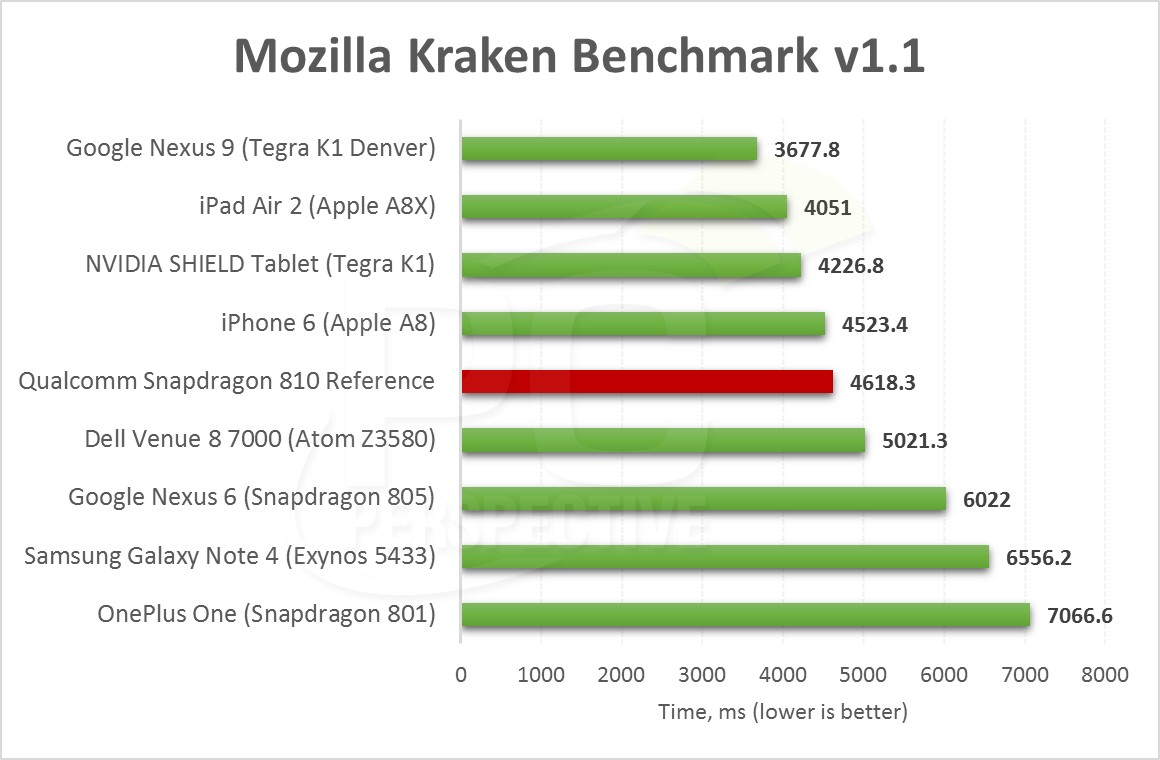 The SD 810 does well in this test too but has a couple more devices best its score of 4618.3ms. Both of the Apple A8 and A8X devices processed the Javascript in less time, as did both of NVIDIA’s Tegra K1 tablets. Notice the large performance jump over both the SD 801 and 805 processors – clearly 810 is going to improve experiences for users. 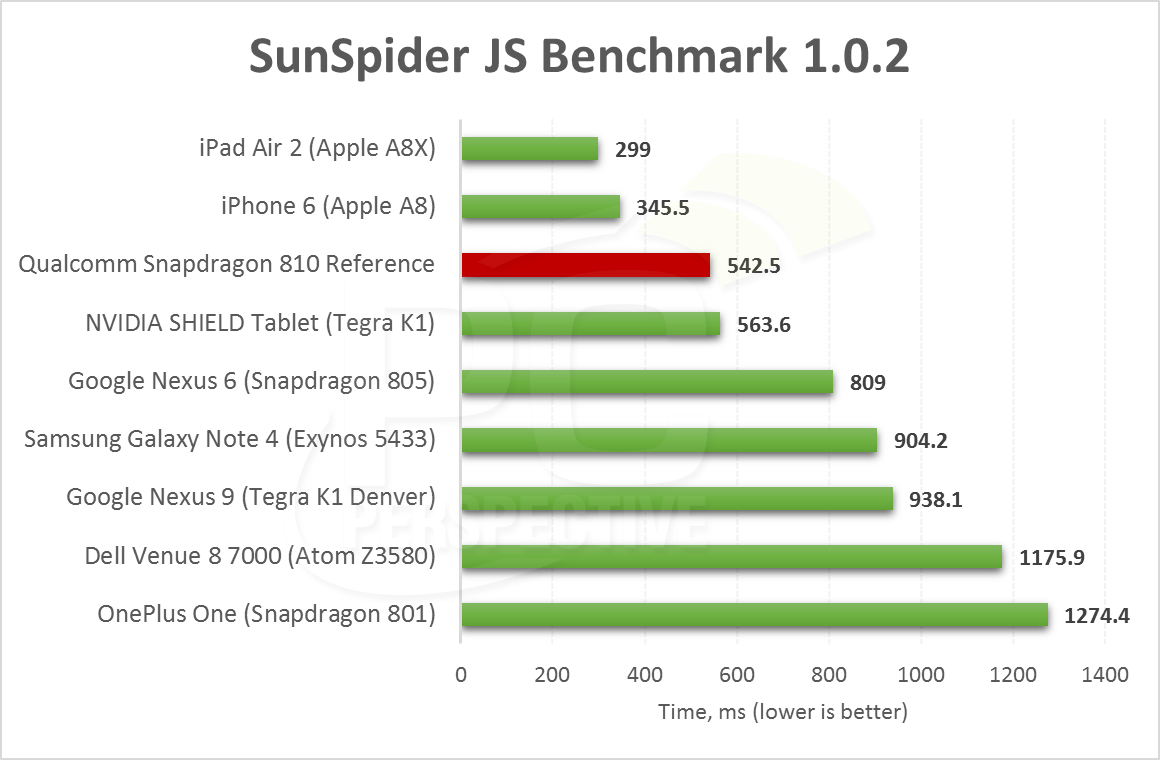 The Snapdragon 810 scores incredibly well here once again with a time of 542.5ms, beating all of the other Android devices in our suite including the Tegra K1 and Exynos 5433. Only the Apple A8 and A8X are faster but they have the advantage of VERY specific optimizations of Safari for the CPUs.

(Note: the graphs will say 3.0 but 3.1 was run on all setups.) This test is Android-only, so the Apple iPad Air 2 and iPhone 6 results will be ignored. 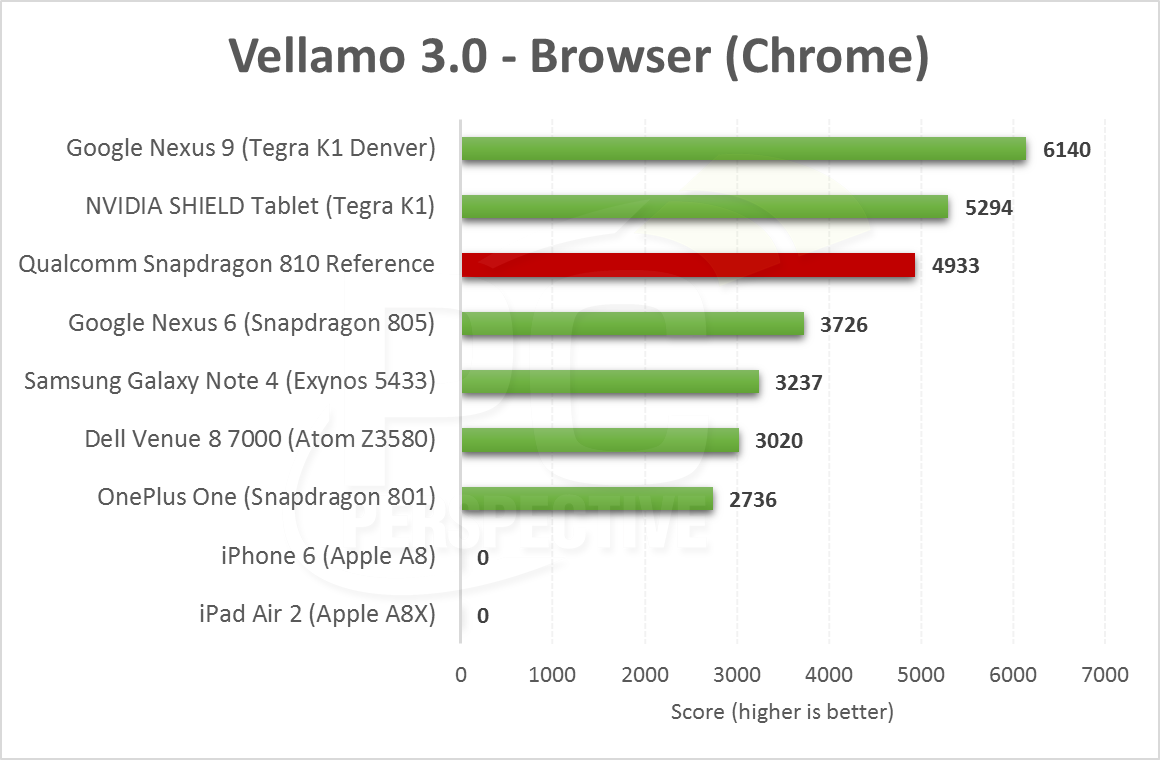 The first Vellamo test uses Chrome and looks at overall browser performance where the Snapdragon 810 result is 32% faster than SD 805 and 80% faster than SD 801! It still runs slower than the Tegra K1 and Tegra K1 Denver SoCs, but those are significantly higher TDP parts. 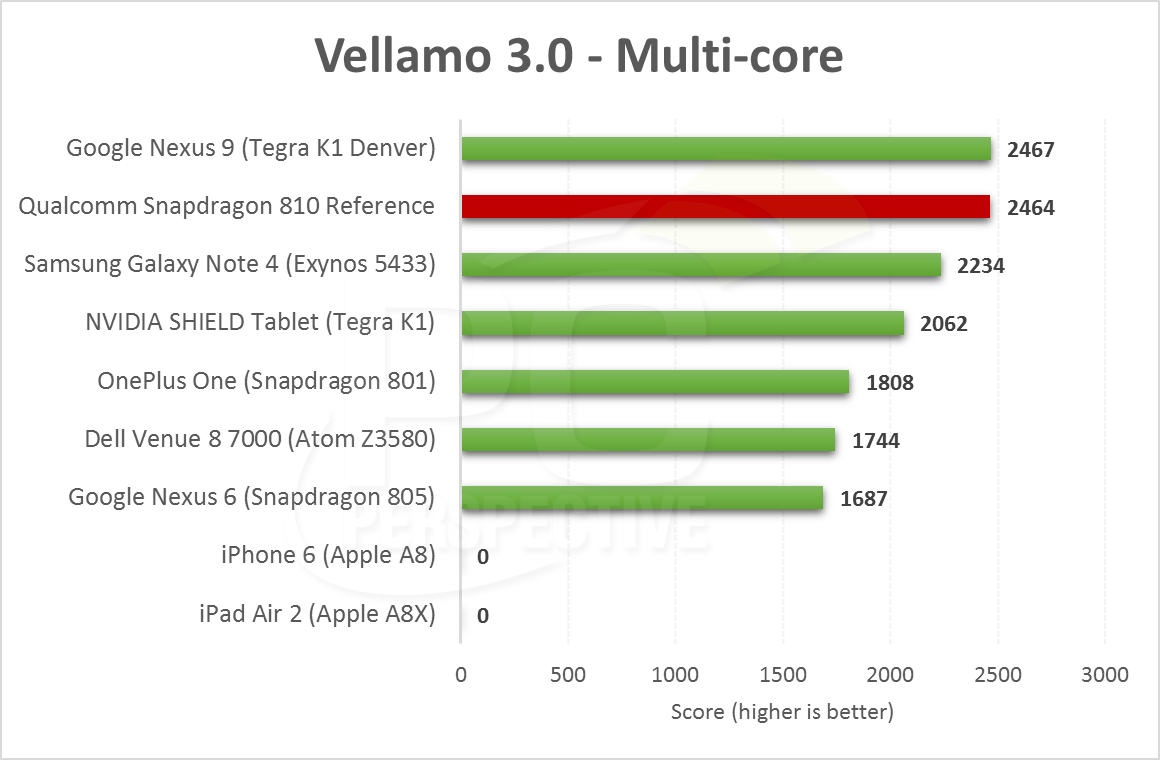 Multi-core results attempt to measure how well the different cores can work together to complete computing tasks, and the SD 810 matches the performance of the K1 Denver-based Nexus 9. 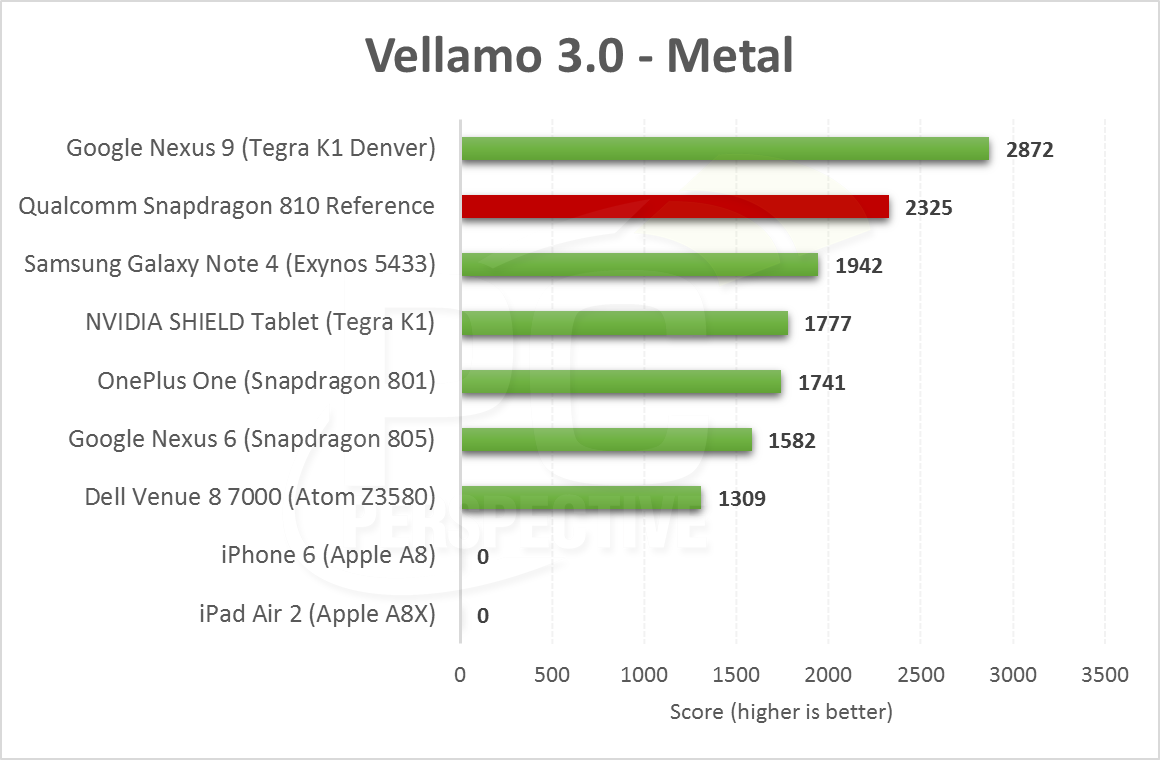 Metal is essentially a single-core test and the 810 reference platform pulls a score of 2325, 33% faster than the previous generation Snapdragon.