Update 2: Outside sources have confirmed to PC Perspective that this driver contains DirectX 12 as well as WDDM 2.0. They also claim that Intel and AMD have DirectX 12 drivers available through Windows Update as well. After enabling iGPU graphics on my i7-4790K, the Intel HD 4600 received a driver update, which also reports as WDDM 2.0 in DXDIAG. I do not have a compatible AMD GPU to test against (just a couple of old Windows 7 laptops) but the source is probably right and some AMD GPUs will be updated to DX12 too.

So it turns out that if your motherboard dies during a Windows Update reboot, then you are going to be spending several hours reinstalling software and patches, but that is not important. What is interesting is the installed version number for NVIDIA's GeForce Drivers when Windows Update was finished with its patching: 349.65. These are not available on NVIDIA's website, and the Driver Model reports WDDM 2.0.

It looks like Microsoft pushed out NVIDIA's DirectX 12 drivers through Windows Update. Update 1 Pt. 1: The "Runtime" reporting 11.0 is confusing though, perhaps this is just DX11 with WDDM 2.0? 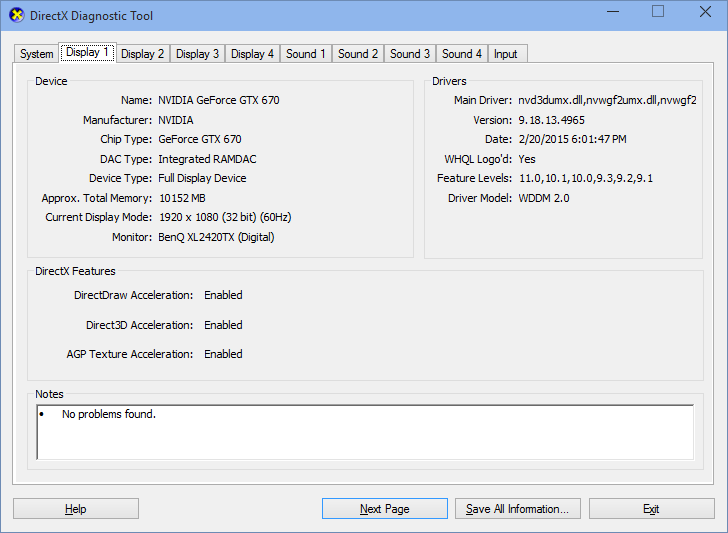 I am hearing online that these drivers support the GeForce 600 series and later GPUs, and that there are later, non-public drivers available (such as 349.72 whose release notes were leaked online). NVIDIA has already announced that DirectX 12 will be supported on GeForce 400-series and later graphics cards, so Fermi drivers will be coming at some point. For now, it's apparently Kepler-and-later, though.

So with OS support and, now, released graphics drivers, all that we are waiting on is software and an SDK (plus any NDAs that may still be in effect). With Game Developers Conference (GDC 2015) coming up in a little over a week, I expect that we will get each of these very soon.