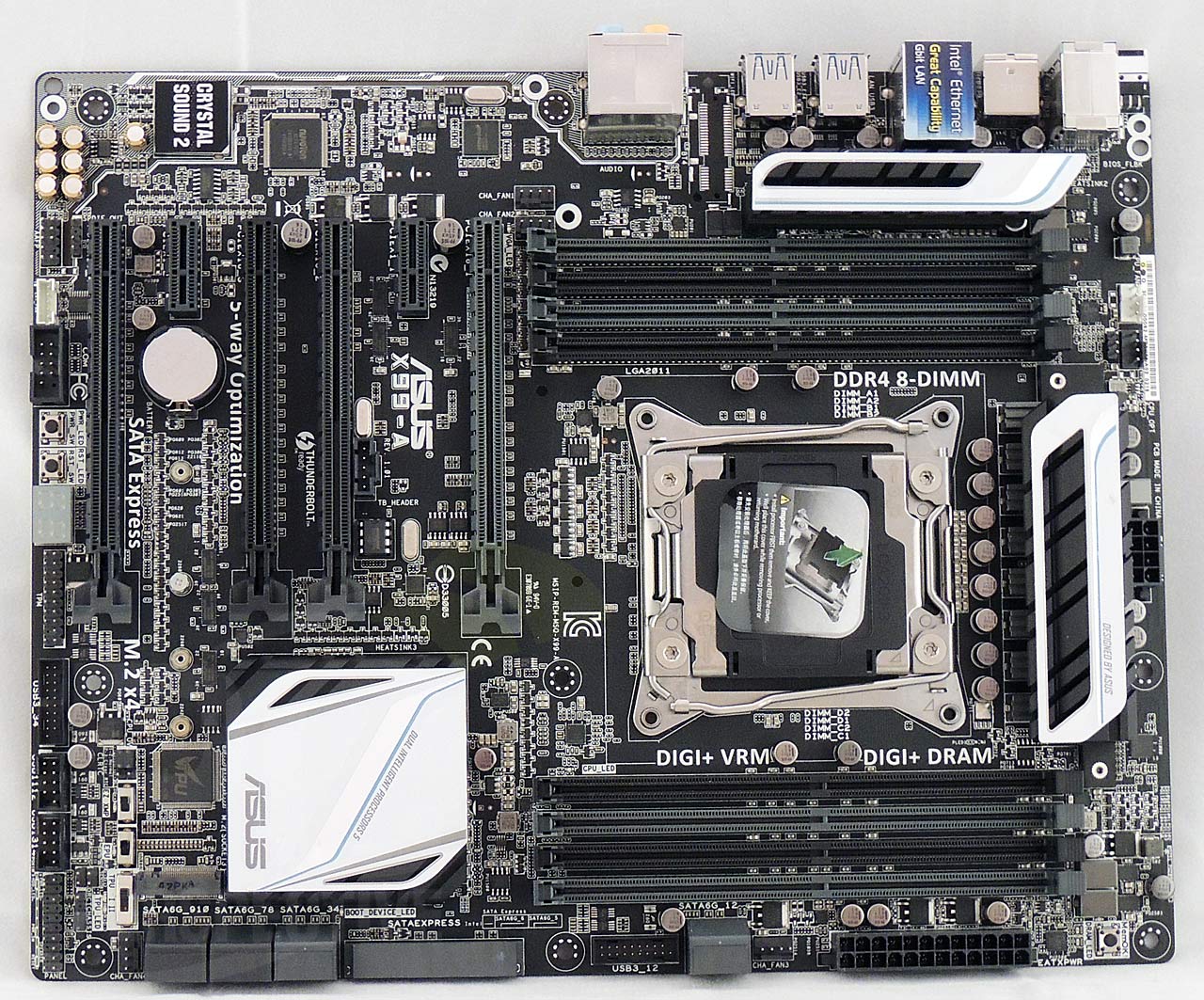 The ASUS X99-A motherboard features the black and white theme common to their channel line of X99 boards. The white heat sink covers give the board a clean and uniform appearance, giving the board a good aesthetic. The audio separator line glows white when the board is powered in line with the board's look. With some creative component placement, ASUS was able to fit all the integrated components into a standard ATX form factor. 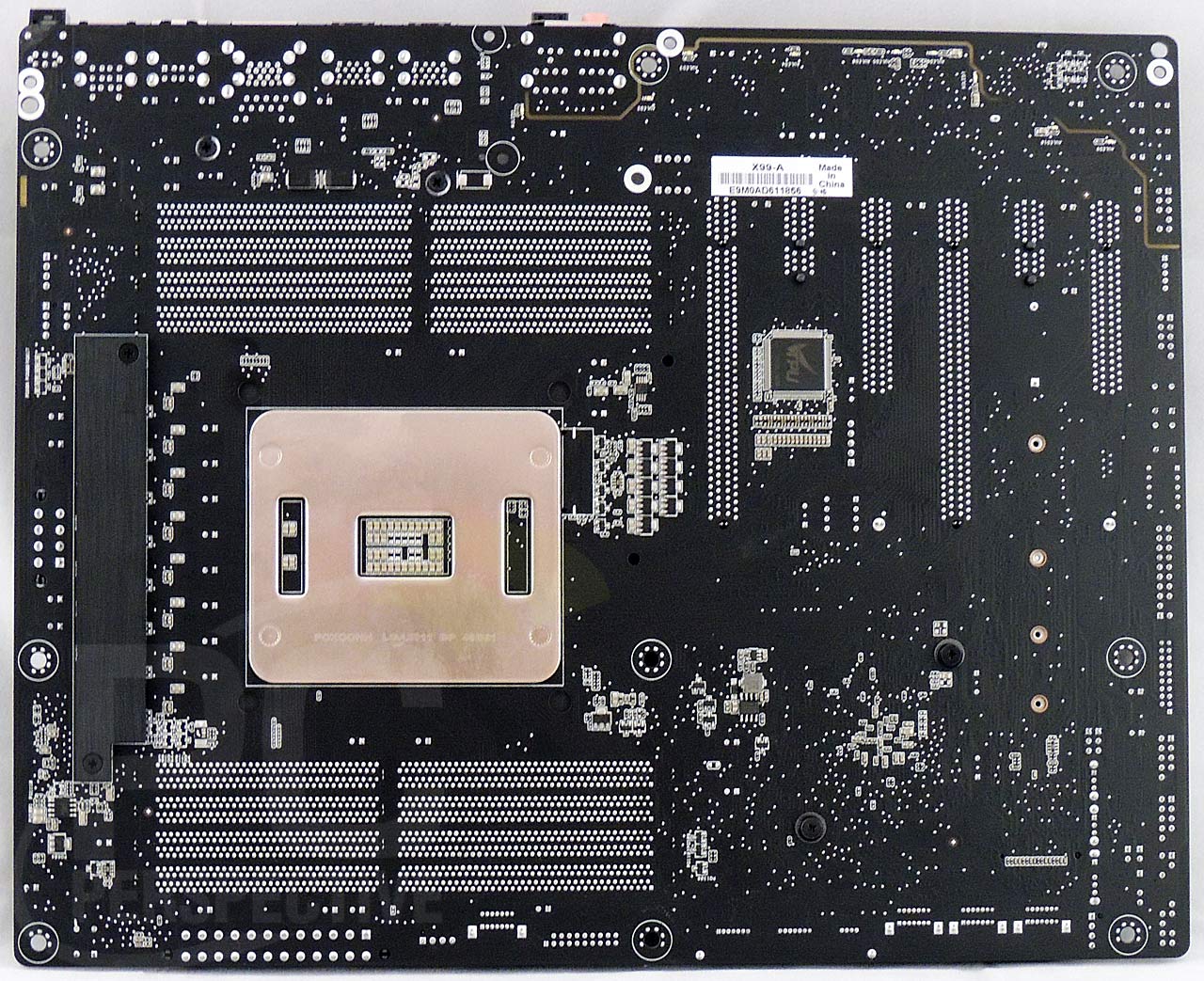 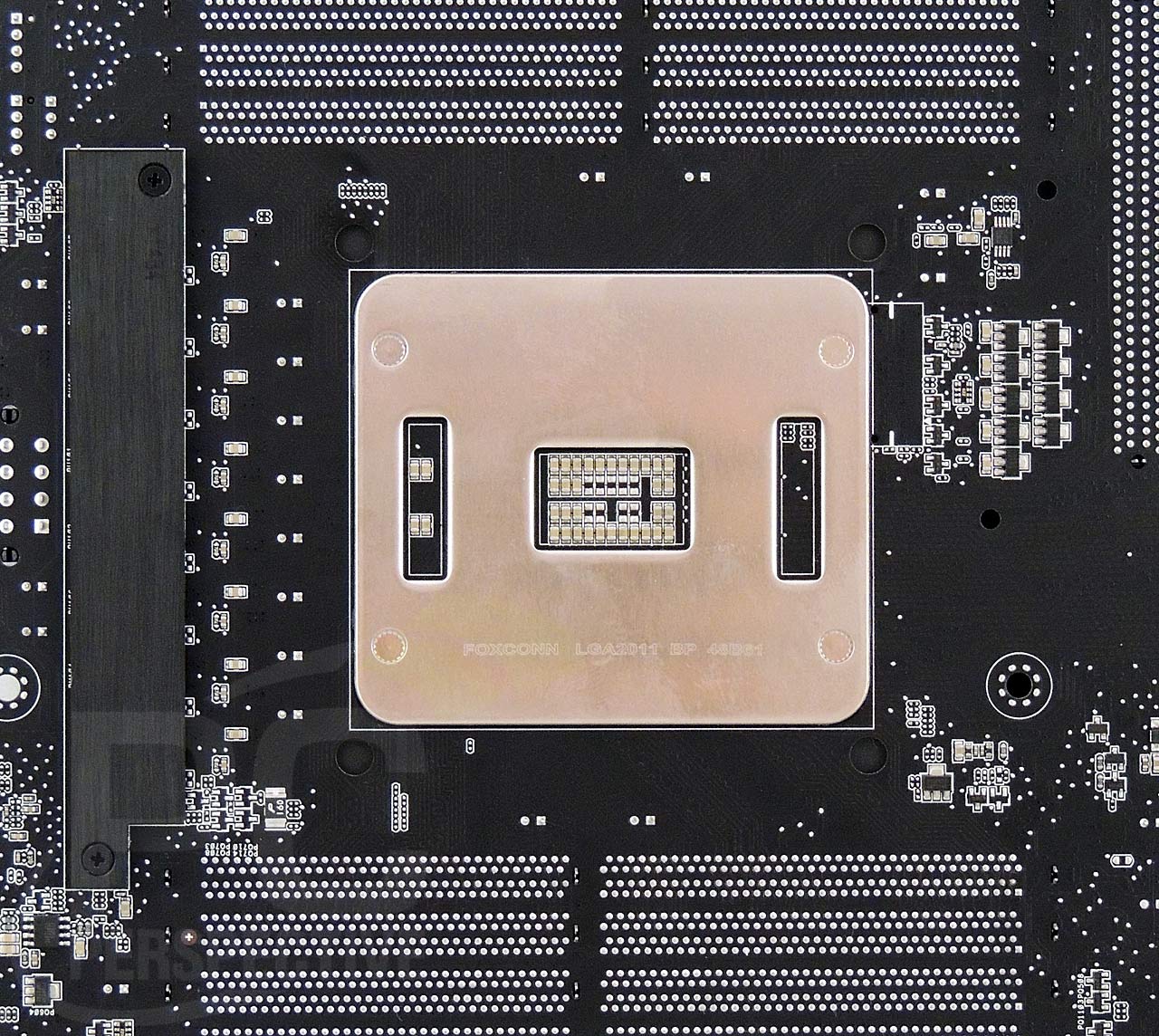 The back of the X99-A board has a light peppering of components spread around its surface with the largest exposed chip being the ASUS EPU chipset underneath the PCIe slots. The CPU VRM circuity is covered by an aluminum heat spreader, offering protection as well as a secondary cooling path for those components.

The USB BIOS Flashback button can be used to re-flash the BIOS without having to boot the system into the UEFI BIOS interface or DOS. Simply plug in a USB drive containing the proper BIOS file in the root of the drive into the lower USB 3.0 port located to the left of the audio port upright and press the button for 3 seconds until the integrated LED begins to flash. As the BIOS is updated, the LED flashing frequency increases. Once the LED goes out, the flash operation is completed and the board can be booted. Note that if the BIOS Flashback LED flashes for 5 seconds and then glows solid, it means that something went wrong with the flashback operation. Check the USB drive for the the BIOS file in the root and make sure that the BIOS file is named correctly. BIOS Flashback looks for a specific filename and file format when attempting to replace the on-board BIOS. According to the user manual, the BIOS file in the root of the flash drive must be named X99A.CAP for the BIOS Flashback applet to successfully re-flash the board's BIOS. 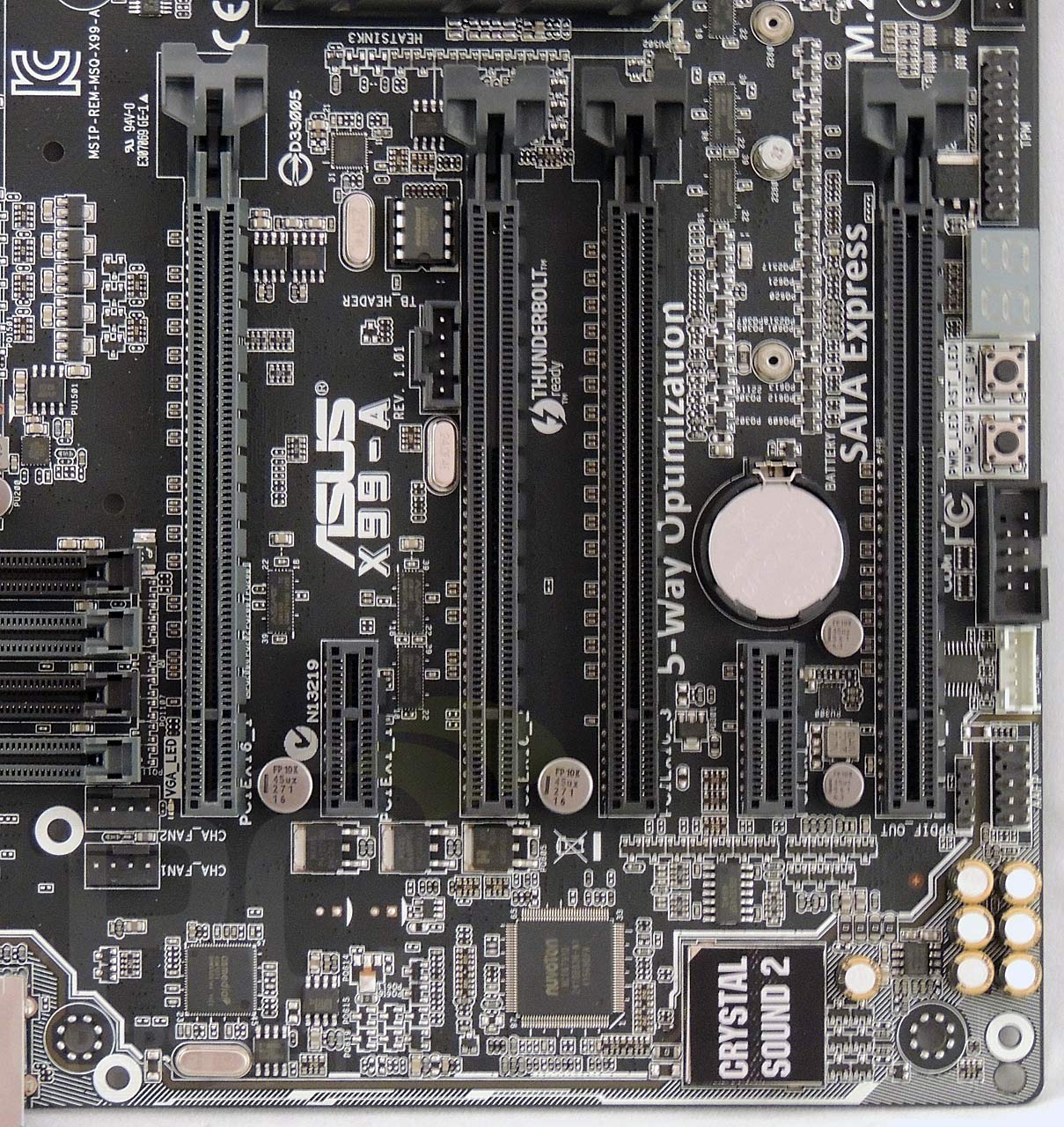 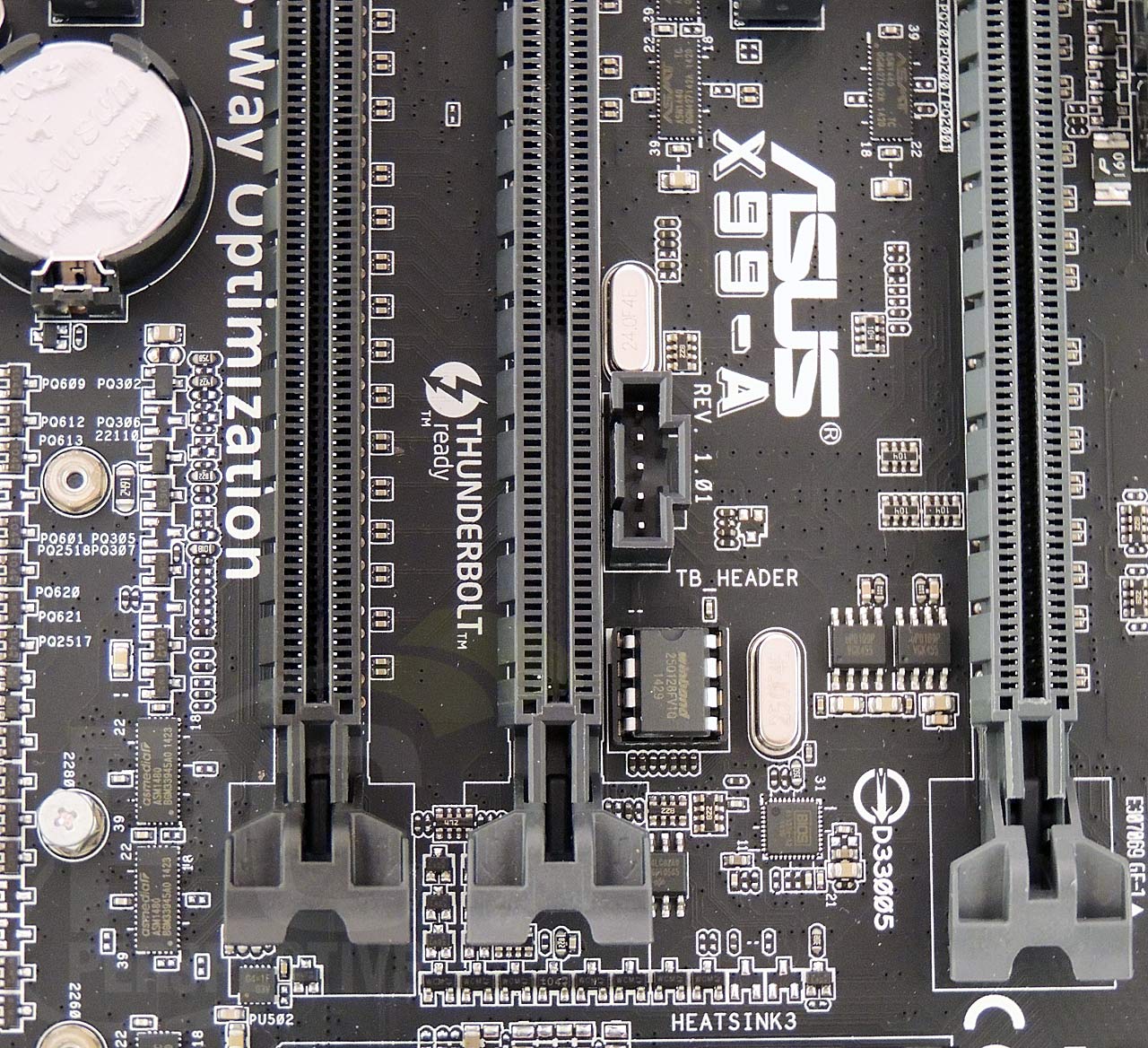 The integrated Thunderbolt device header is located to the lower left of the secondary PCIe x16 slot. The Thunderbolt header is used to connect to the optional ThunderboltEX II PCIe card using the USB extension cables bundled with the card.

For the X99-A's audio needs, ASUS integrated their Crystal Sound 2 audio subsystem into the board's design on an isolated PCB to ensure to minimize line-noise and distortion from other integrated components. The PCB separator line glows white along its length when the board is powered, keeping to the board's black and white color scheme. The front panel audio and S/PDIF output headers are located in the upper left corner of the audio PCB, to the left of the audio chipset. 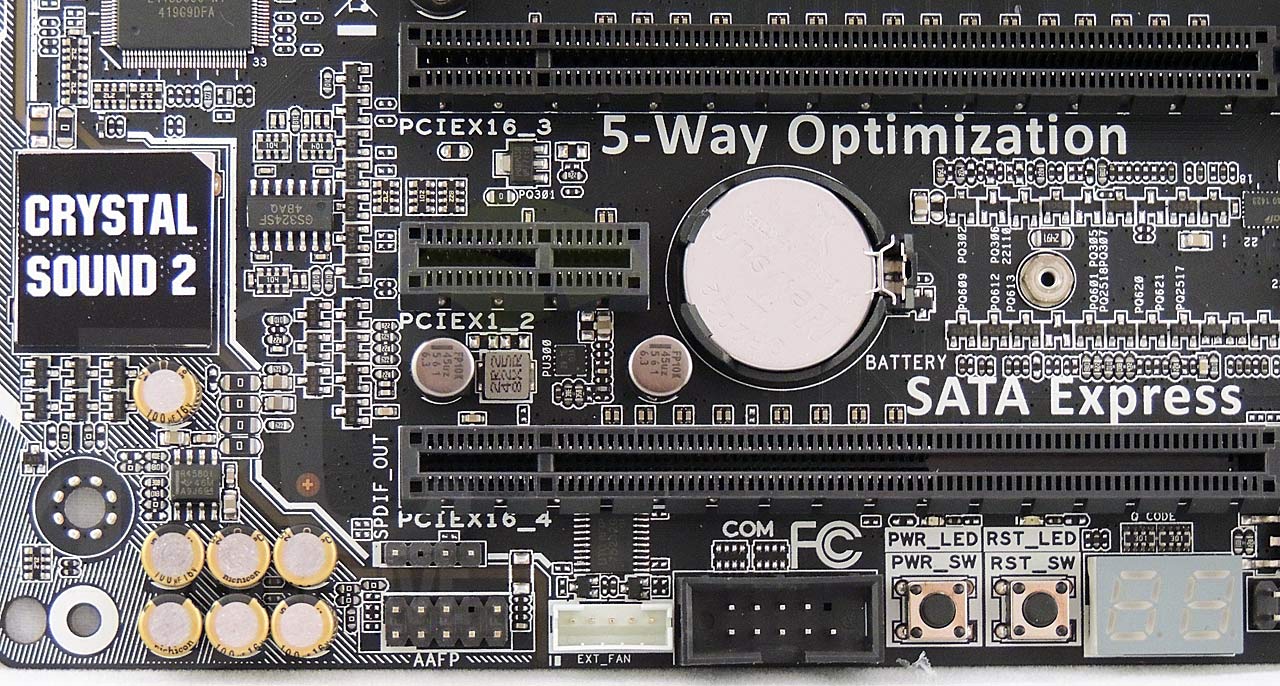 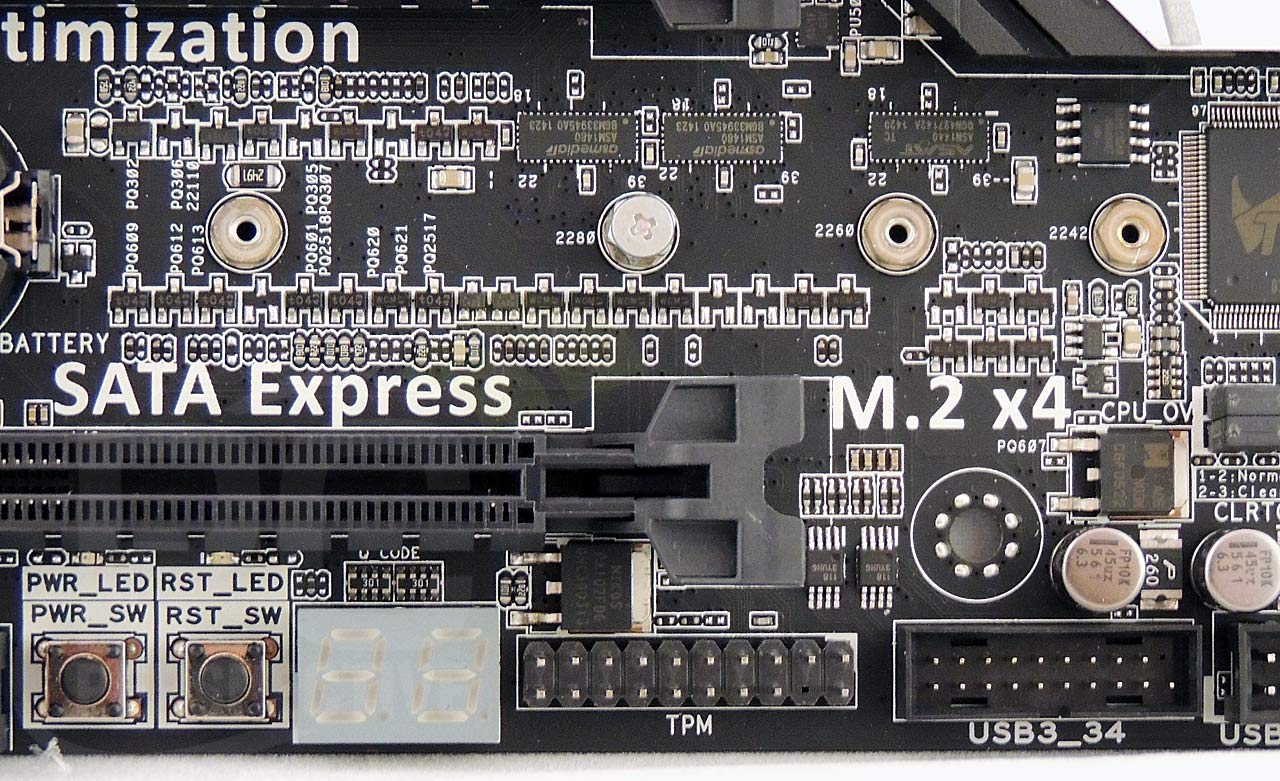 In the upper left quadrant of the board (and along the outer edge of the fourth PCIe x16 slot) are the front panel audio header, the S/PDIF output header, the external fan header, a serial port header, the power and reset buttons, the 2-digit diagnostic LED, the trusted module port header, and a USB 3.0 header controlled by the Intel X99 chipset. The CMOS battery sits just below the secondary PCIe x1 slot, in between the third and fourth PCIe x16 slots. The 2-digit diagnostic display can be used for debugging system issues during system initialization. The displayed debug codes can be decoded using the table from the motherboard manual. The external fan header can be used to connect to the external Fan Extension card, adding additional fan headers and temperature sensor ports to the board. 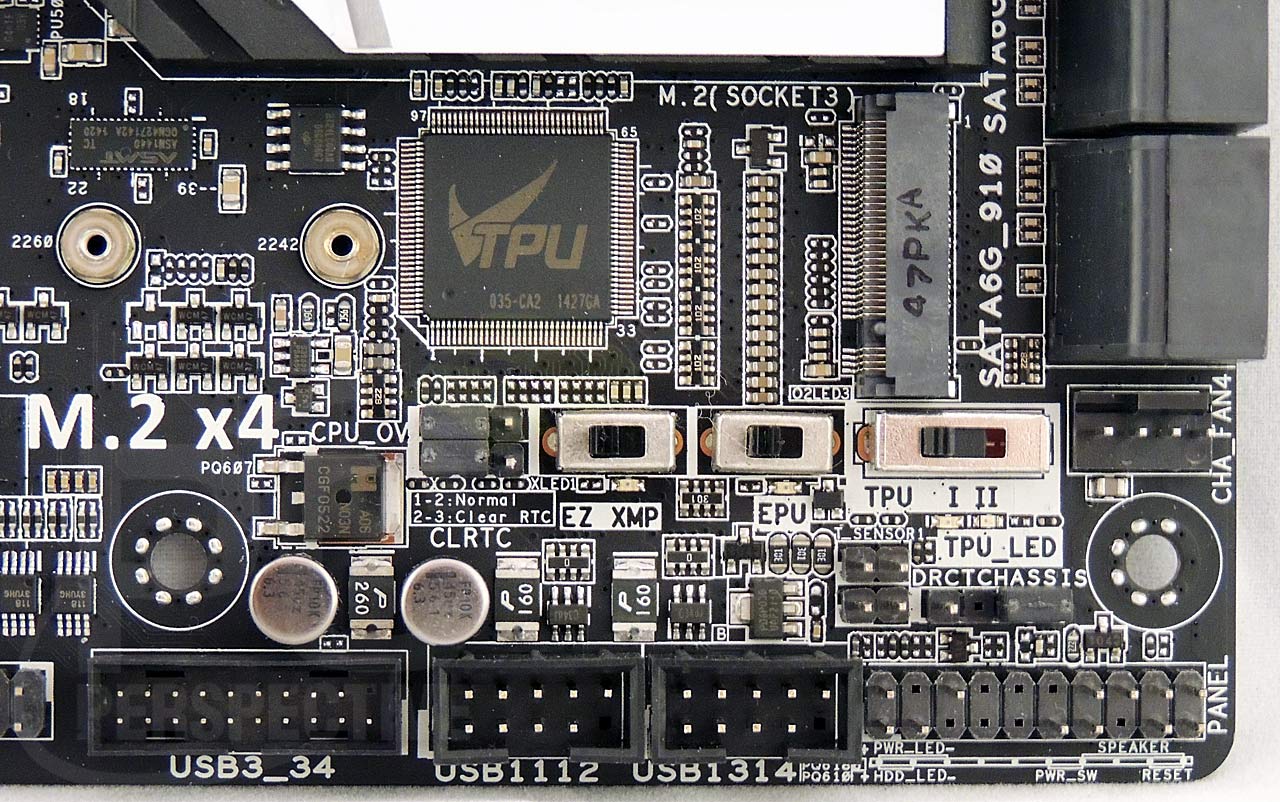 The USB 3.0 header, USB 2.0 headers, front panel header, the CPU overvolt and CMOS clear jumpers, EZ XMP, EPU, and TPU switches, temperature sensor header, Direct Key header, and chassis intrusion header are located in the lower left corner of the board. The DirectKey header can be connected to a case button, triggering direct board boot in to the UEFI BIOS on next reboot. The EZ XMP switch allows you to activate the memory XMP speed and setting specifications when enabled, overriding any current active BIOS settings. The EPU switch enables BIOS controlled power consumption optimization. The TPU switch enables BIOS assisted overclocking with two modes available. In mode 1, only the CPU ratio is changed. In mode 2, both the CPU ratio and the base clock value are changed. 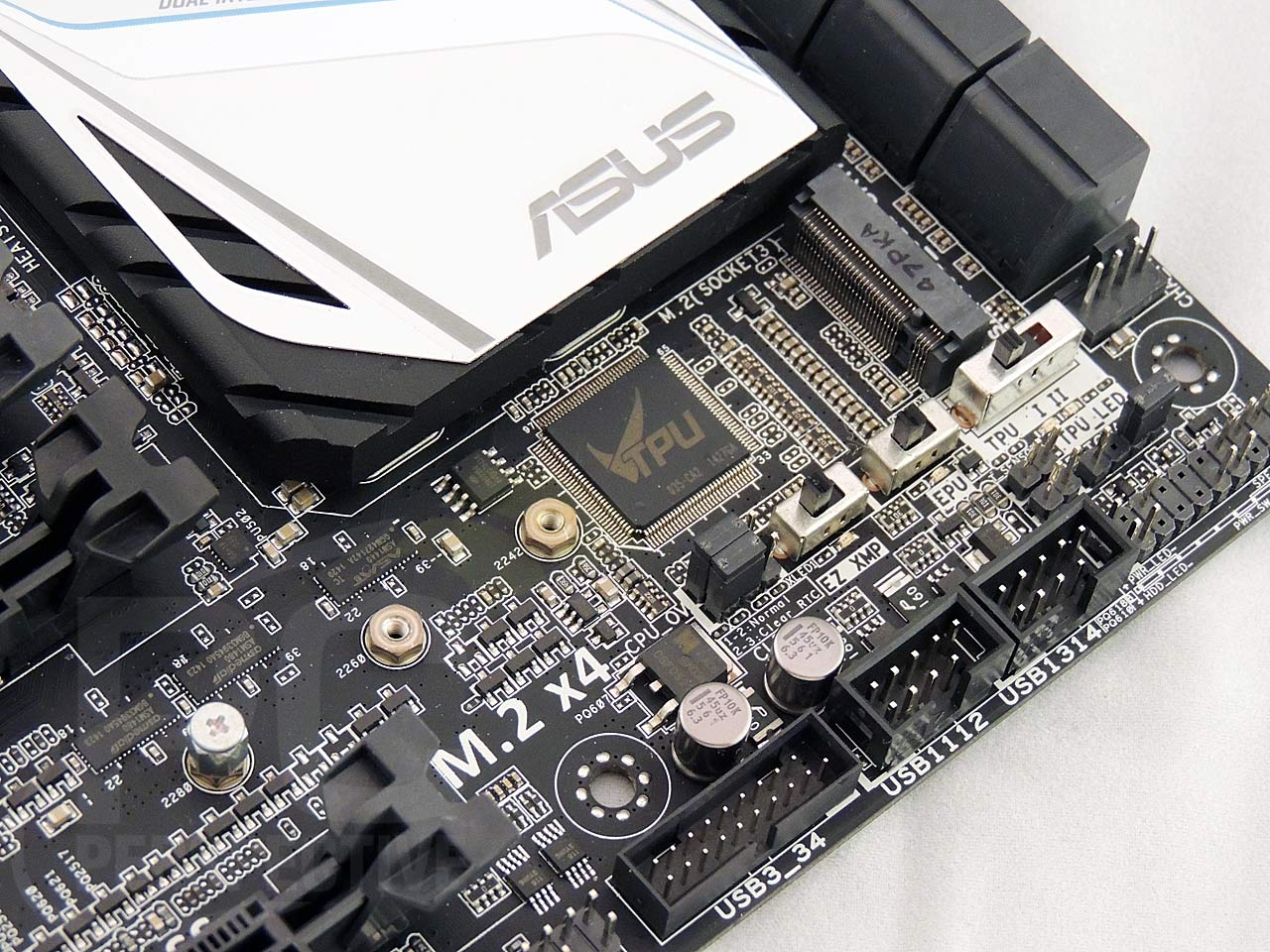 The M.2 PCIe x4 port is located to the upper left of the SATA port block, to the left of the X99 chipset heat sink. The board supports M.2 PCIe SSDs up to 80mm in length. Note that the M.2 and the fourth PCIe x16 slot share bandwidth and are designed to be mutually exclusive. 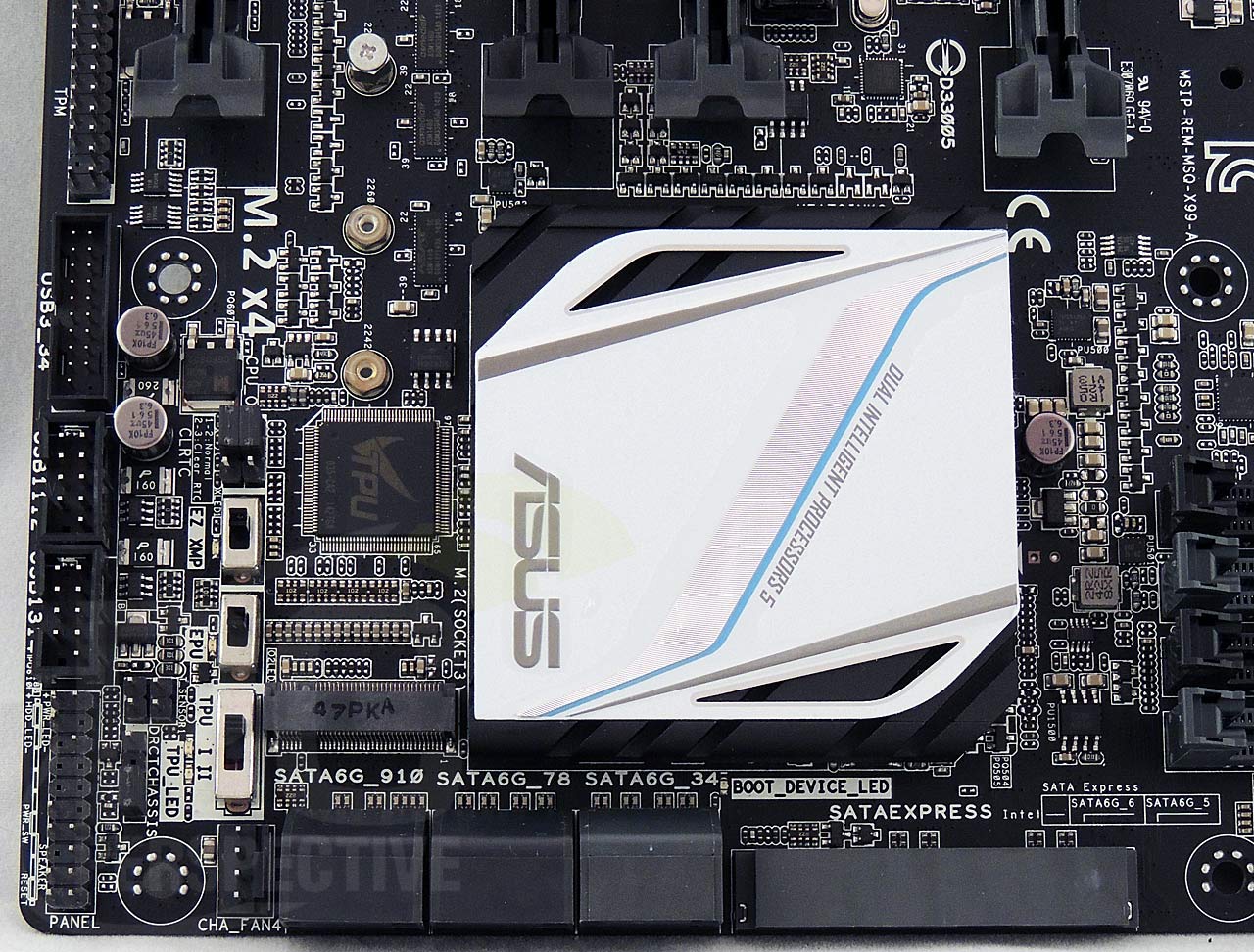 The Intel X99 chipset is covered by a large white colored, low-profile, aluminum heat sink with the ASUS corporate logo emblazoned across its surface.

The eight integrated DDR4 memory slots are located directly above and below the CPU socket with support for up to 64GB of memory across all slots. Quad Channel memory mode is enabled with memory modules seated in like colored slots. The primary memory slots are the grey colored slots in both the top and bottom sets. Note that memory speeds above 2133MHz are considered overclocked speeds and are outside of the official Intel stock memory speed specifications. 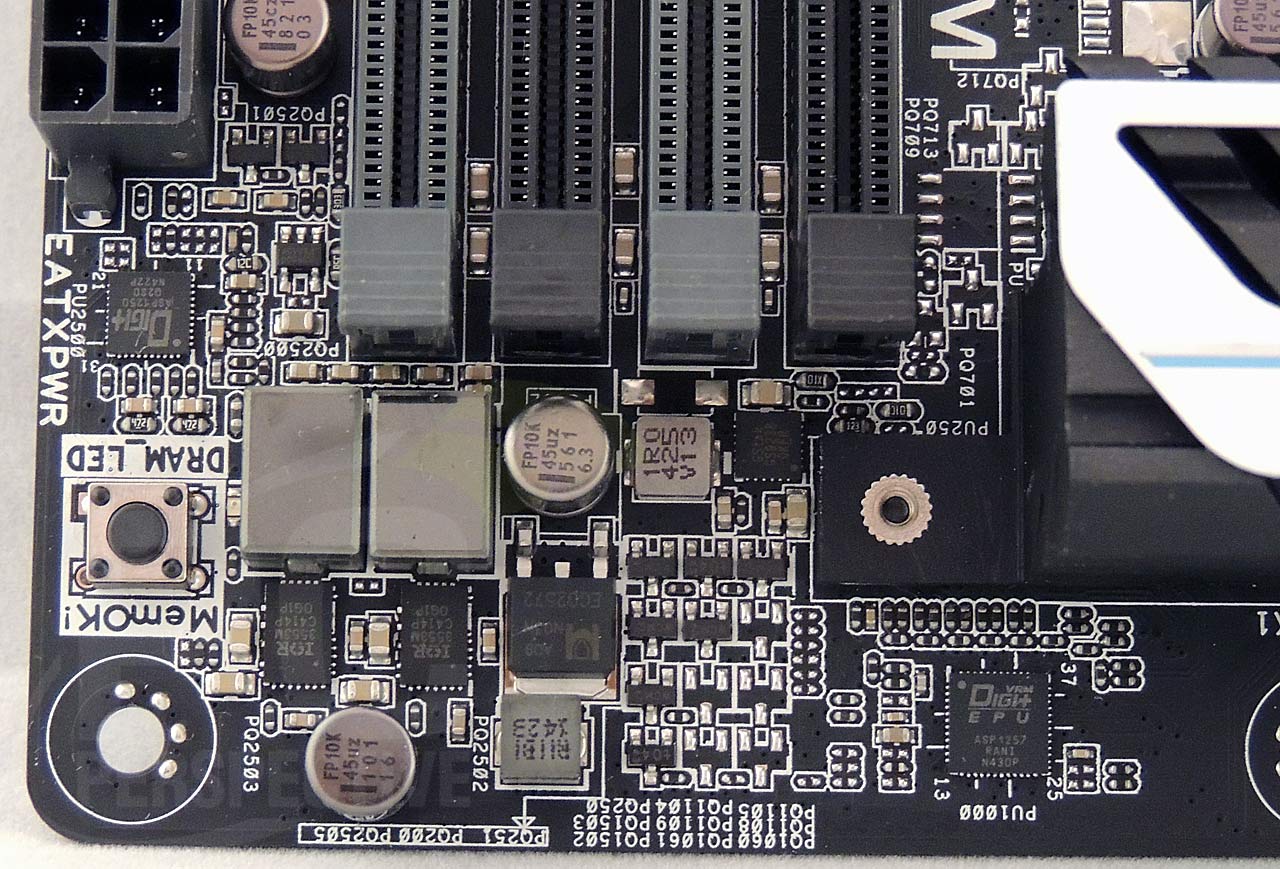 To the lower left of the lower set of DIMM slots are an Intel X99 controlled USB 3.0 header, two SATA 6 Gb/s ports, and a chassis fan header. To the lower right of the DIMM slots are the 24-pin power connector and the MemOK! button. The MemOK! button can be used to reset memory-related BIOS settings to defaults, useful when the system doesn't boot because of memory options set over-aggressively. 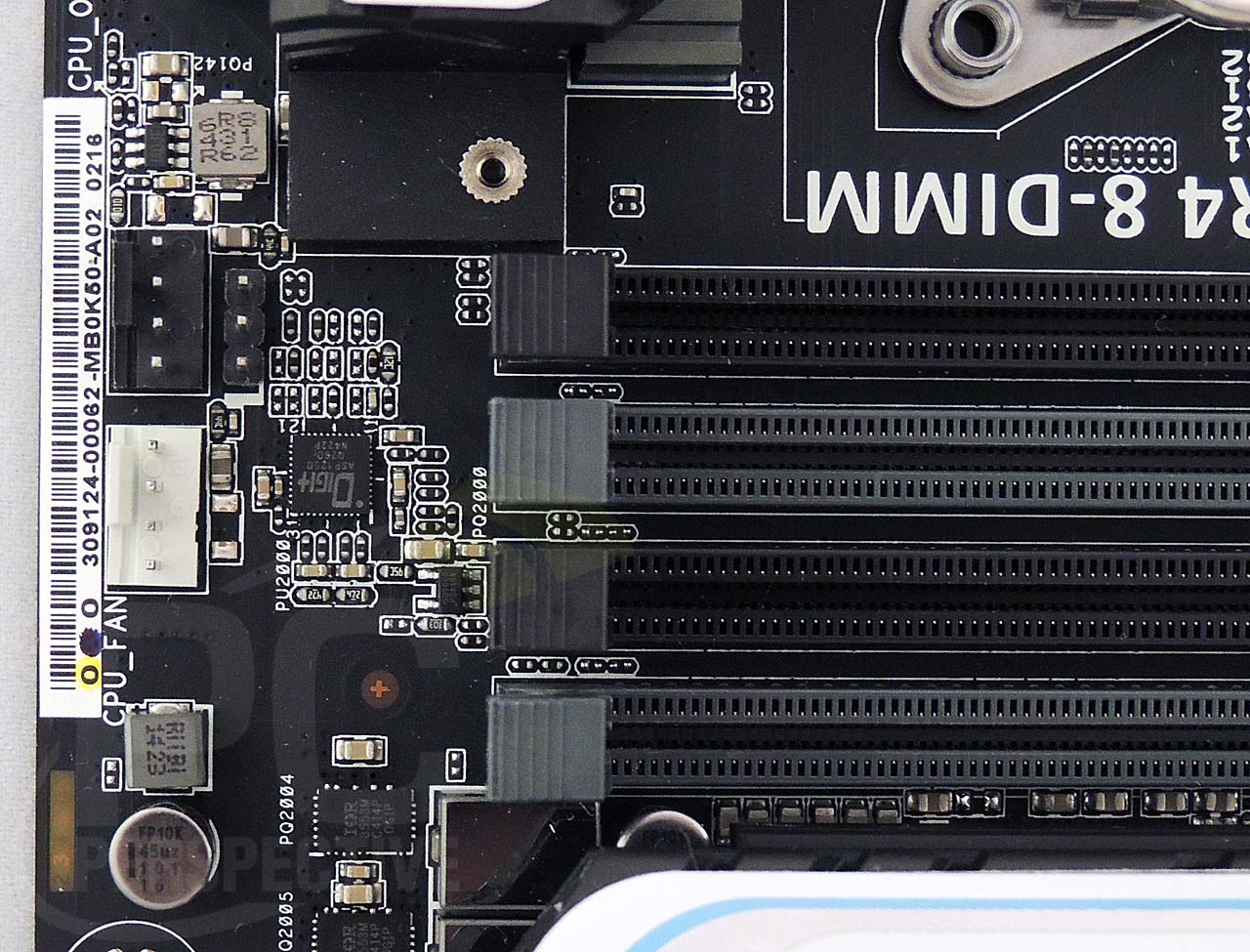 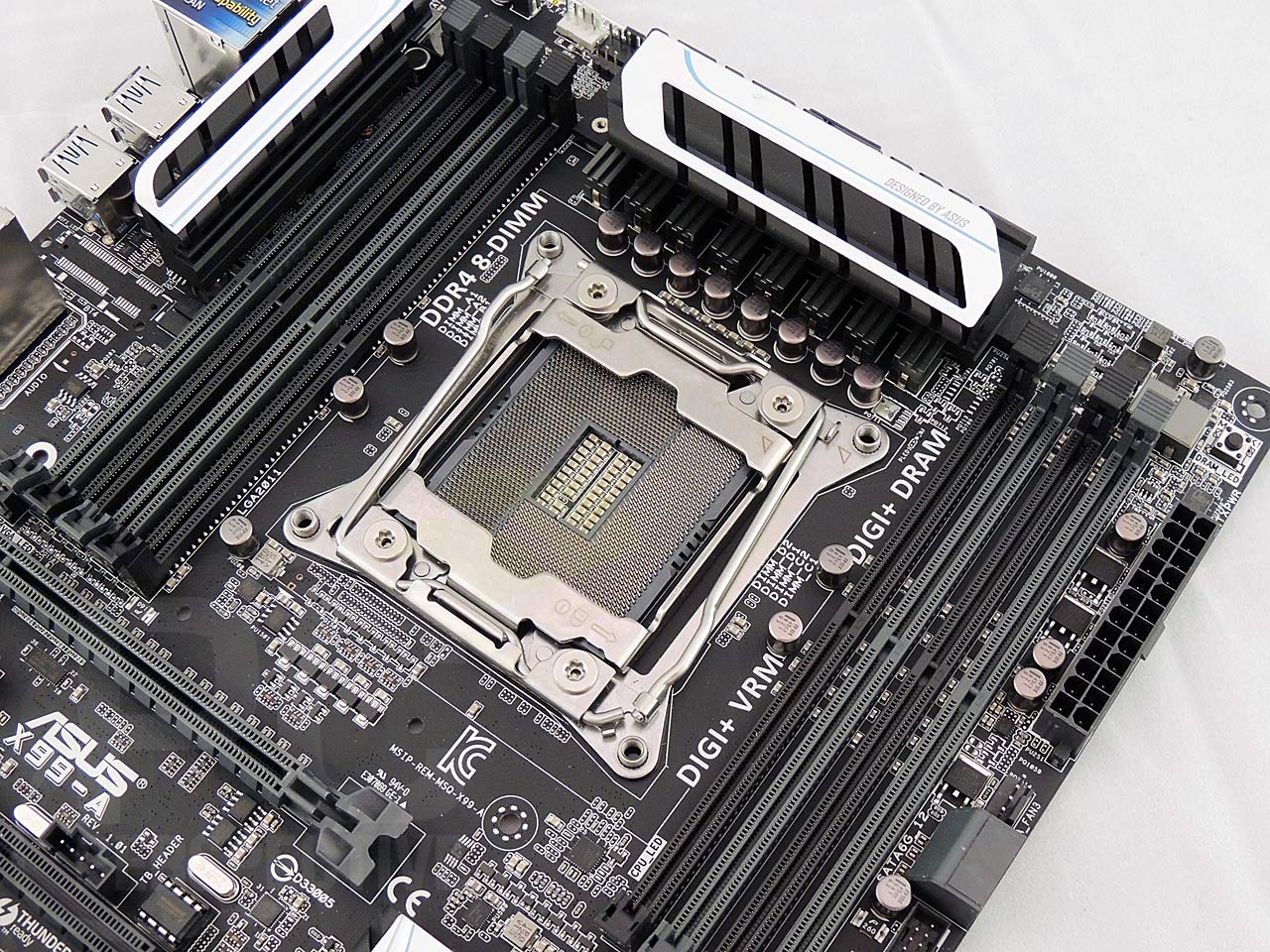 The CPU socket area is clear of obstructions even with the coolers along both sides of the socket. There is nothing to impeded cooler to CPU surface mating to the right of the socket and the heat sink covering the power circuitry to the left of the socket is of a lower profile variety to minimize space conflicts. 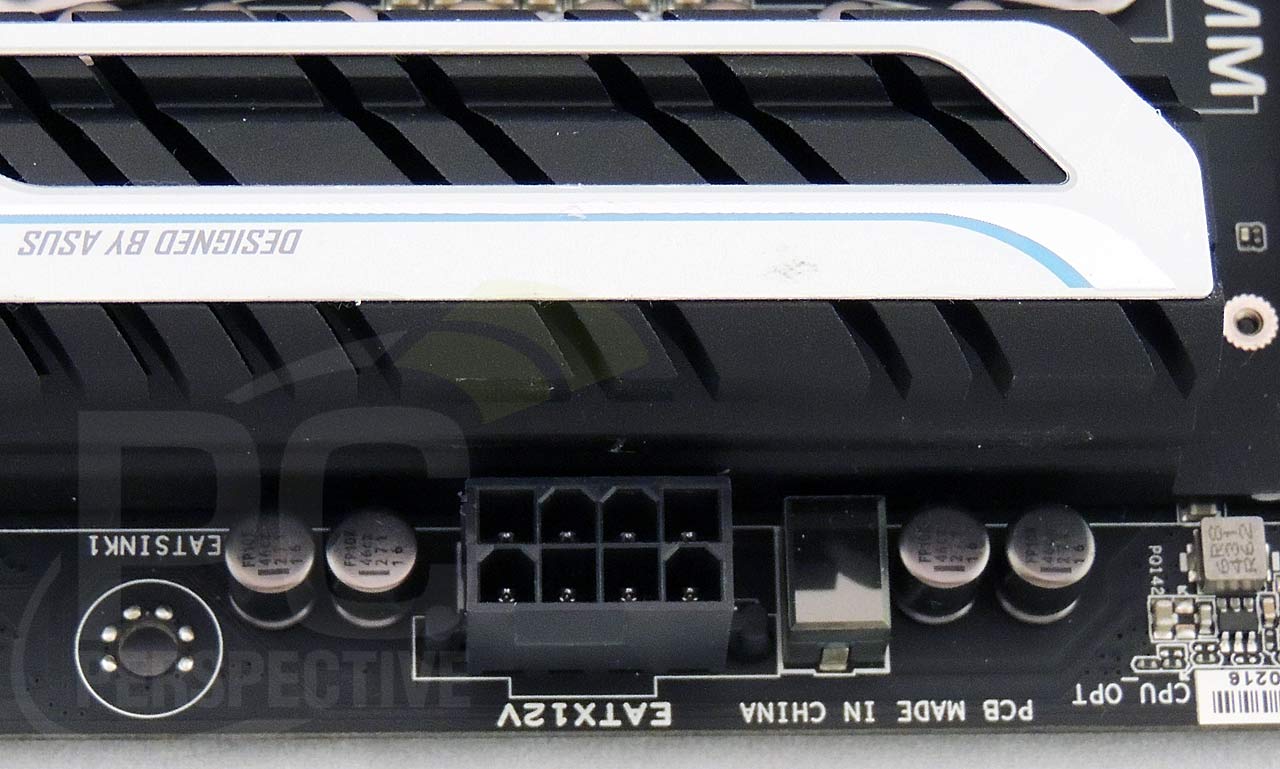