The ThinkPad W540 features a Chiclet-style keyboard which is nearly identical to that of the T440s.  That also, by extension, means that it is excellent—one of the better keyboards we’ve had the pleasure to use on a laptop, in fact (though which is truly the very best is a highly subjective matter).  The smooth-surfaced, backlit keys are tightly-affixed, feature good travel and feedback, and a reasonable actuation force which isn’t too demanding on the user.  They’re also relatively quiet, which is nice for a business environment.  Finally, seeing as we’re dealing with a 15.6-inch form factor, there’s the ever-useful number pad to the right of the keyboard. 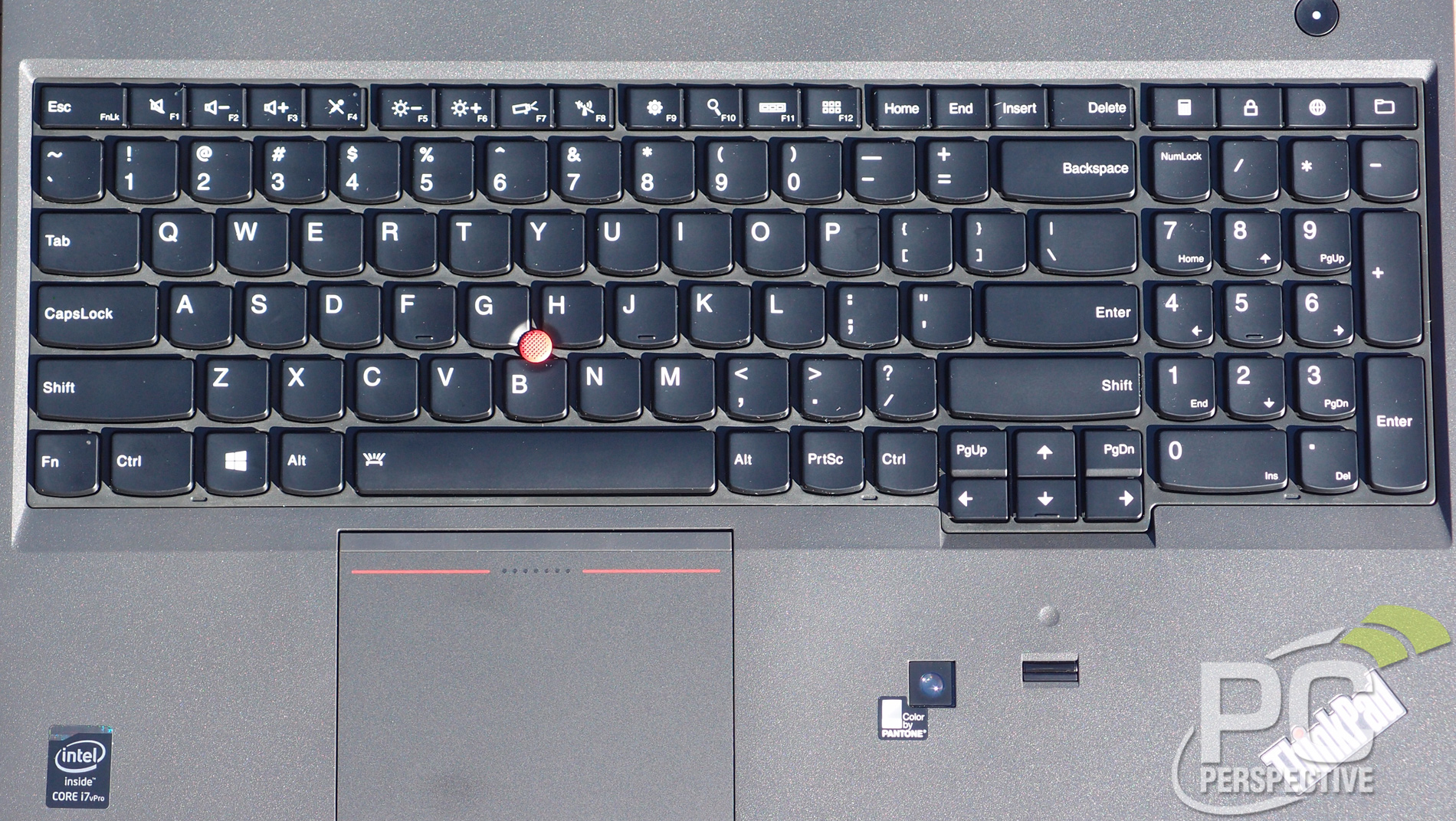 We’ve said quite enough about this generation of ThinkPad touchpads most likely, but to summarize: while they’re accurate for pointing and comfortably large, the full-depression pad surface not only requires more energy to physically “click” than a conventional set of buttons, but it also results in pointer movement upon some clicks which just plain drives us mad.  We would love to have a set of physical buttons back, or at the very least, a clickpad that functions a bit more conventionally.

In fact, Lenovo has partially rectified this problem already at the time of publication. A minor update to the W540 we reviewed is now available in the W541, which still doesn't have dedicated touchpad buttons, but it does have dedicated Trackpoint buttons (which can electively be used with the touchpad in lieu of the full click operation). 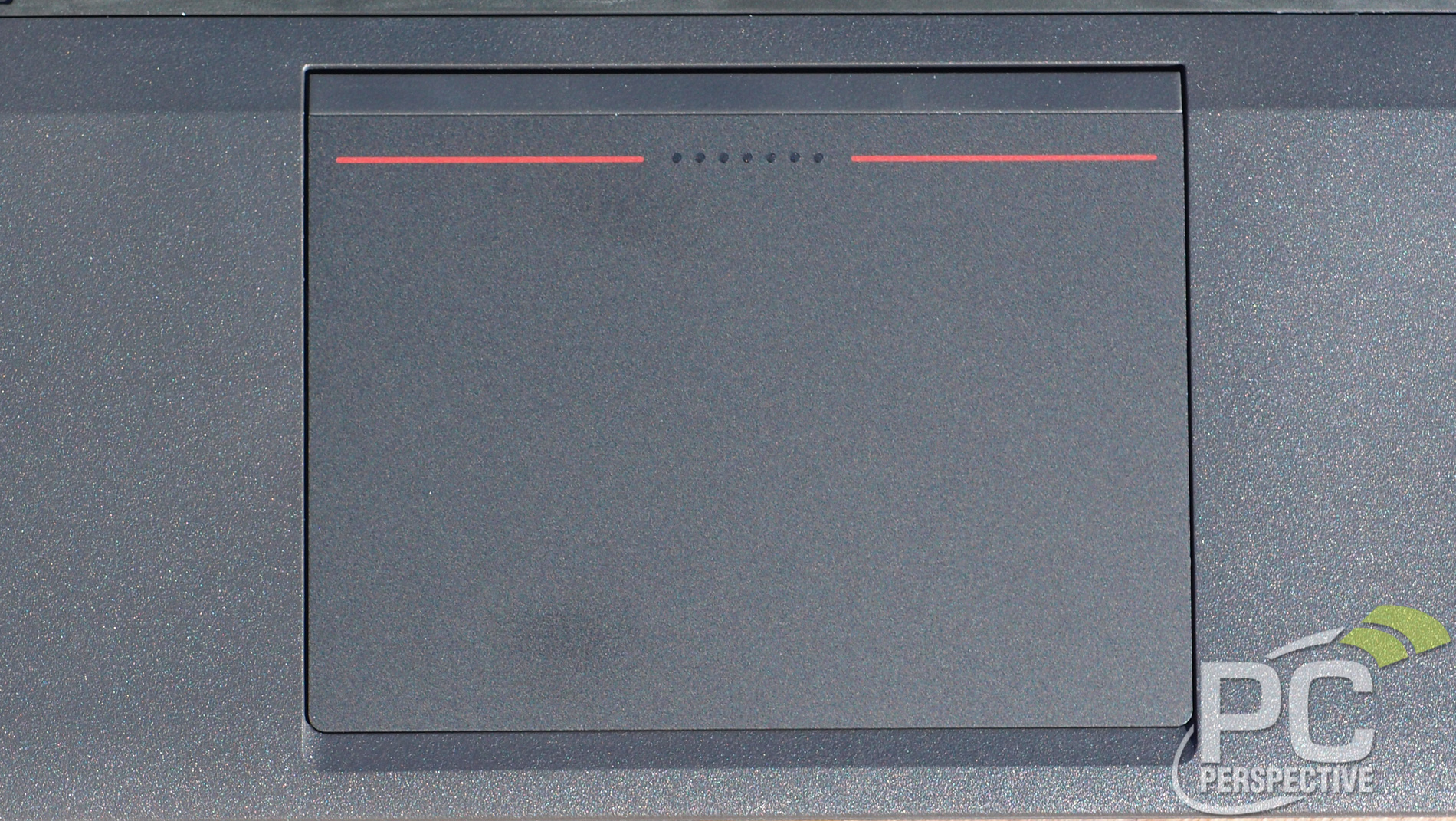 One strange omission on this unit is that of any sort of indicator LEDs, such as those to show charging status, Caps Lock, and disk activity.  This isn’t always a problem, but when you need indicator lights, you need indicator lights.  Relying on the screen not only is suboptimal for sake of usability, but also, it provides no insight into what the disk is up to.  Normally with a solid-state drive this isn’t too much of a problem, but it’s still a puzzling oversight.

Although it’s possible to configure the ThinkPad W540 with a lower-end 1080p TN panel, our review unit arrived equipped with a 15.6-inch 3K (2880×1620) IPS display, which is advantageous not only due to the obviously higher resolution, but also thanks to the fact that it’s an IPS panel.  Naturally, that yields far better viewing angles, and as an added bonus, the nicer panel also apparently features better brightness (Lenovo quotes 350 cd/m²) and color reproduction (which we found to be pleasant and vivid). 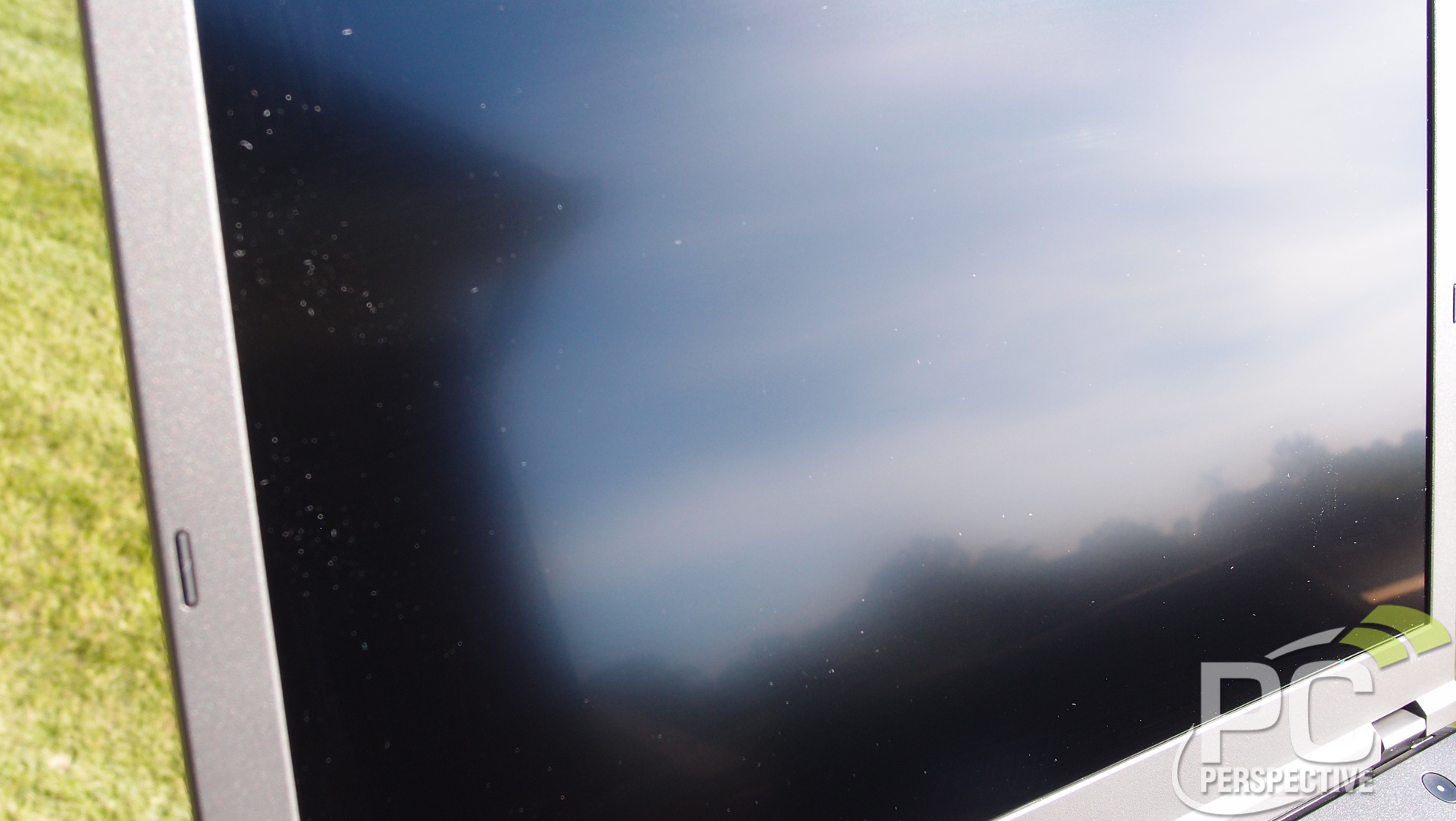 The panel finish is matte, though it does have a slight bit of a sheen to it—similar to that of many modern LCD televisions, which are really more of a semi-matte finish.  The reflectivity of the W540’s panel sort of reminds us of the ThinkPad Yoga, which had a touchscreen with a semi-matte filter covering it.  Coupled with the very good brightness, it’s enough to render the machine comfortable for outdoor use (especially in the shade), so that’s good enough for us. 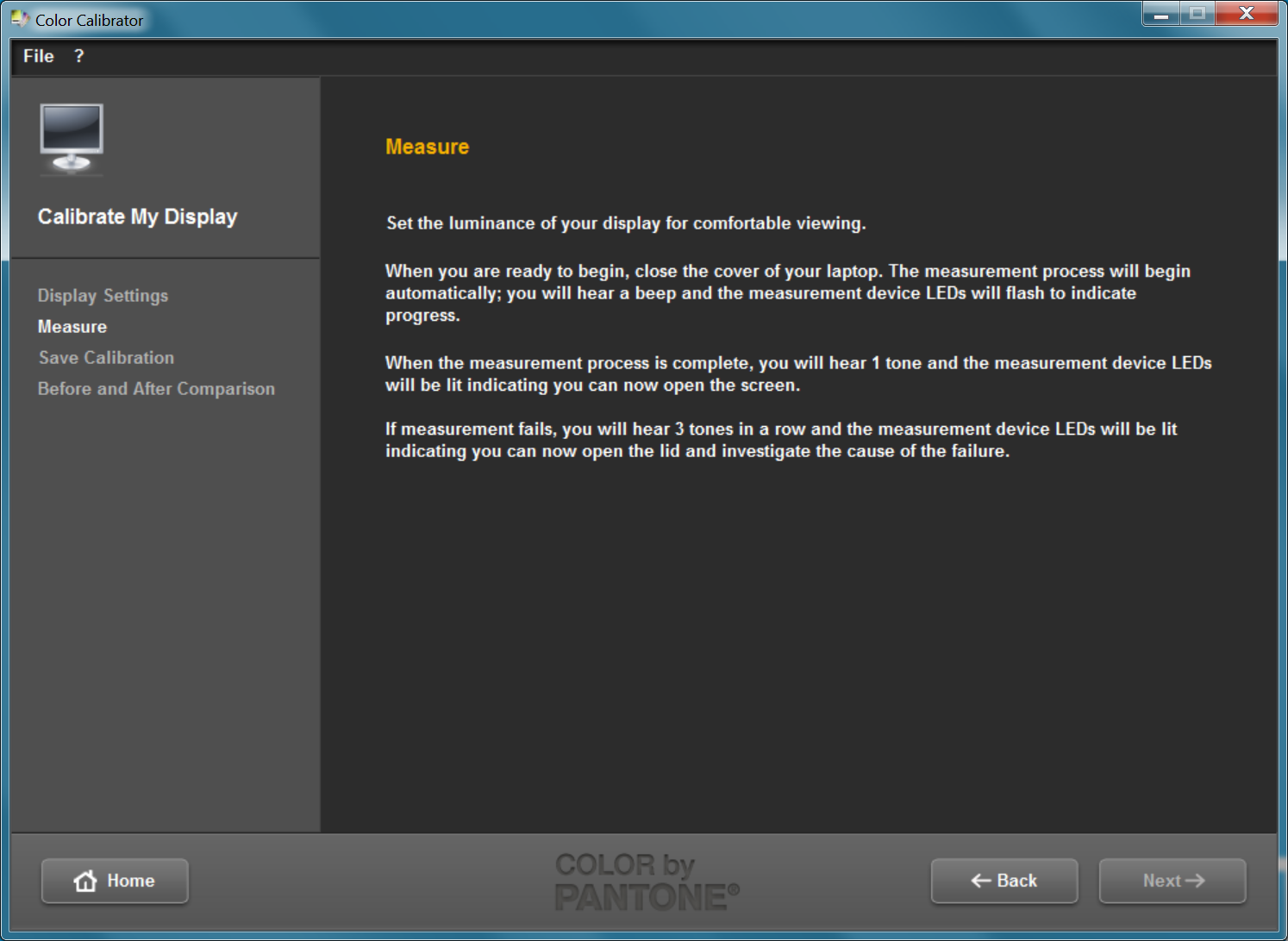 The built-in color calibrator (optional) is a nice tool to have even if it likely cannot rival far pricier standalone professional tools: at the very least, you can calibrate the white point and gamma using it, and it requires absolutely zero expertise to do so. 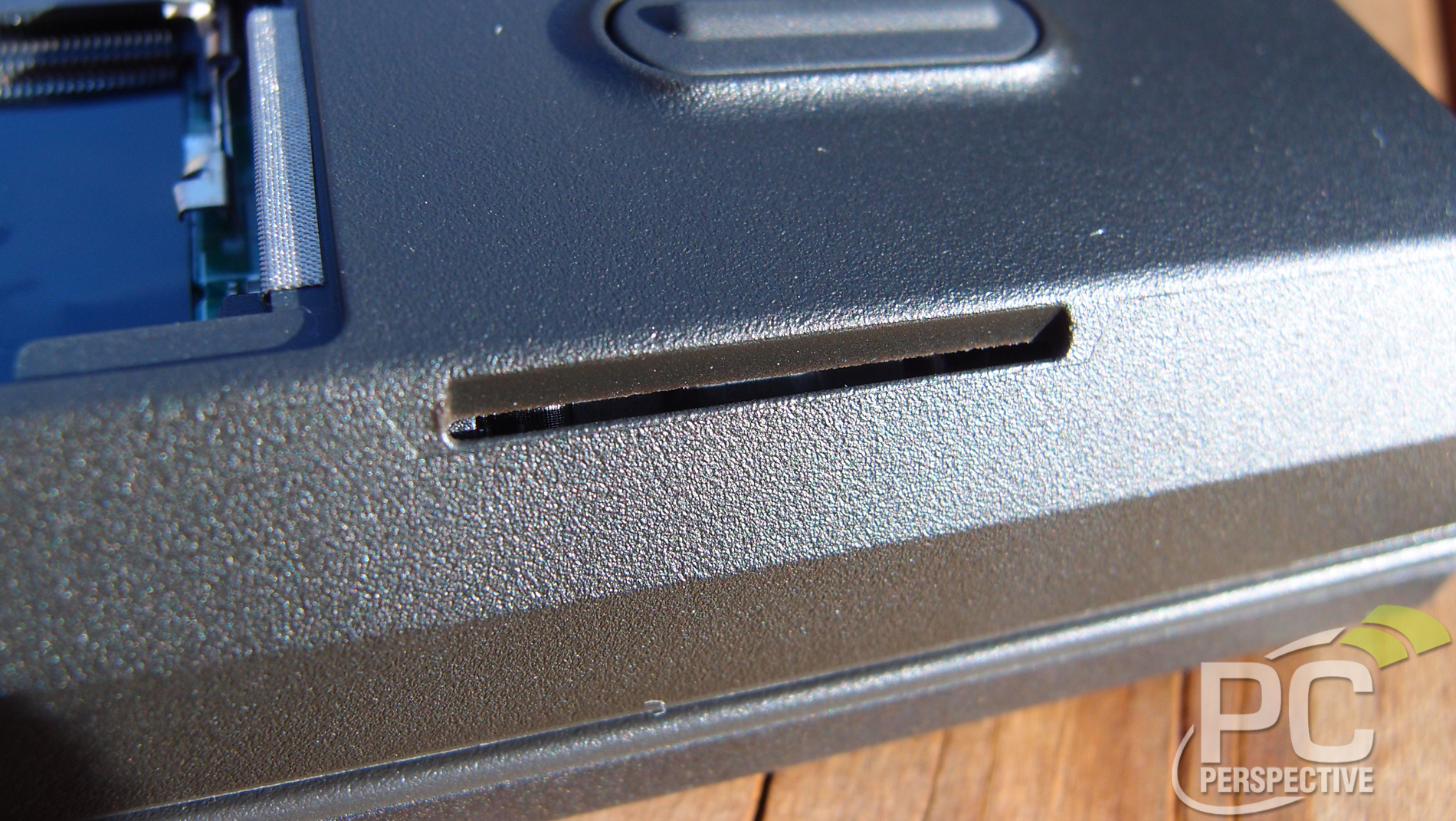 The speakers are found at the bottom front of the notebook, where they fire downward onto the surface below.  The result is a clear and relatively loud sound with a surprisingly full-bodied profile that sounds better than that of most business notebooks.

The W540 can be configured with either an NVIDIA Quadro K1100M or K2100M, both with 2 GB of memory.  Ours shipped with the K2100M, which inherently generates more heat due to a higher TGP (55W versus 45W).  Of course, this is only a problem under load; the machine switches via Optimus as well to leverage the lower-powered Intel HD Graphics 4600 where a discrete GPU is not warranted.

What’s interesting is that the machine remains quiet throughout nearly all operation.  During typical use, it’s practically inaudible, with the fan running at very low RPMs and with merely a faint whir at that.  As load increases, the fan becomes audible, but it isn’t even really all that bothersome at its top-end speed during heavy stress. 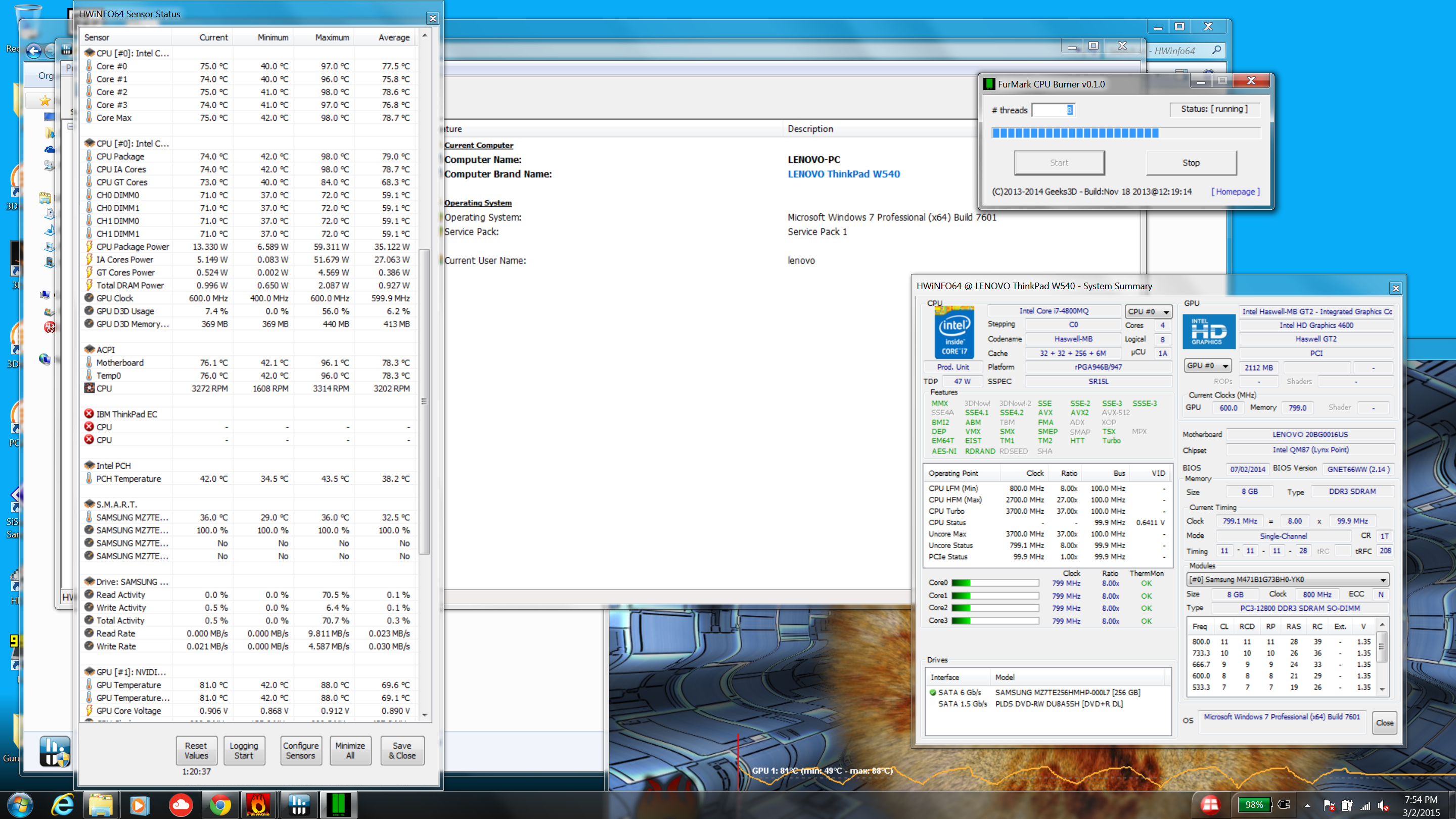 Check out the temperatures under full system stress

What makes that less interesting is how hot it gets.  The right side of the unit hardly changes temperature at all, but the left side heats up considerably, quickly to the point of discomfort—even on the top at the palm rest (which at one point during our testing was almost too hot to touch).  The result is a sweaty, hot left hand (and leg) and a right hand/leg that feels perfectly normal.  It’s terribly annoying even when sitting on a flat surface.

Our temperature readings corroborate these findings.  Under CPU and GPU stress, internal temperatures (of the CPU and GPU respectively) eventually reach 88 °C and 71 °C.  The CPU manages max Turbo frequencies still under these conditions, which is fortunate, as that’s a fairly high CPU reading—but it’s nothing compared to what happens under full stress.  With both CPU and GPU receiving heavy loads, we measured up to 98 °C CPU and 88 °C–and predictably, throttling ensued.  It’s unlikely that such situations will be encountered in everyday use, but these very real thermal limitations—and the uncomfortable surface temperatures that result from them—raise some questions about the thermal management of the W540.

Even with its more efficient chipset and large 99 Wh battery, the ThinkPad W540 isn’t going to score you a lot of runtime unplugged in most scenarios—at least, not with the 3K screen and Quadro K2100M that our configuration boasts.  As always, all of our battery tests are run on medium brightness (approximately 200 cd/m²) and with all wireless radios on. 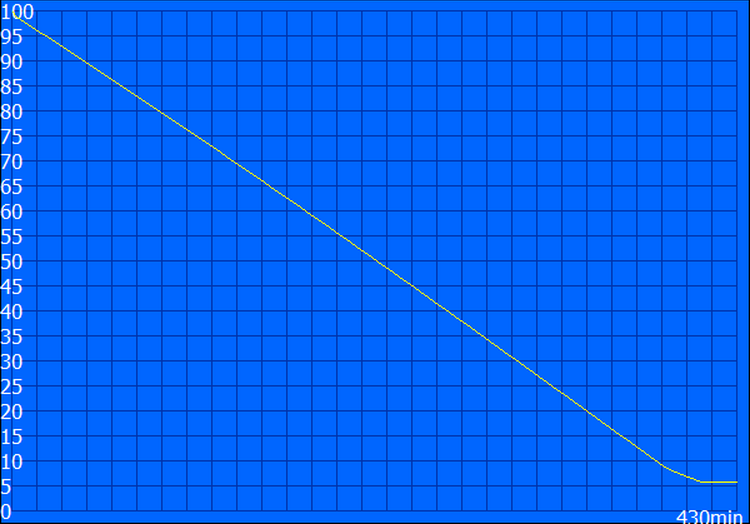 Here, the machine manages just 7:10 total, which is passable, but not great.  To help put it in context, the T440s (which features a low-voltage chipset and integrated graphics only) equipped with its total of 6 cells of battery (3 internal + 3 external) still made off with 9:36, over two hours longer.  Of course, these machines have totally different purposes—so again, viewing the W540 as more of a business-grade gaming machine is a fairer way of approaching the comparison. 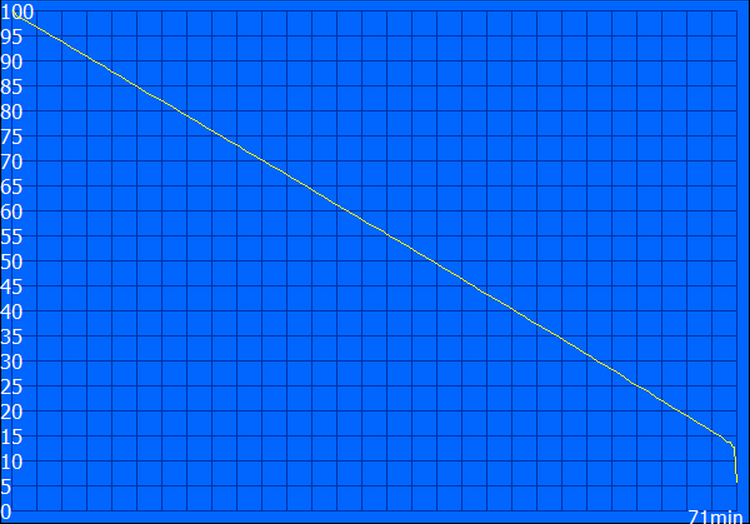 For an idea of what would be closer to maximal load, the Classic Test lasted for just 1:11 on our W540.  Considering the 99 Wh battery, that’s a pretty weak result—but again, it’s what you’re signing up for with a 3K screen, quad-core 35 W TDP CPU, and hefty discrete Quadro GPU.

It’s also worth mentioning as a footnote that, logically speaking, one ought to be able to expect considerably better runtimes with a “standard” 1080p screen.  The option exists, and if battery life means more to you than screen density and quality, it’s an easy choice in our opinion.

We wrap up this section with our comparisons for context: 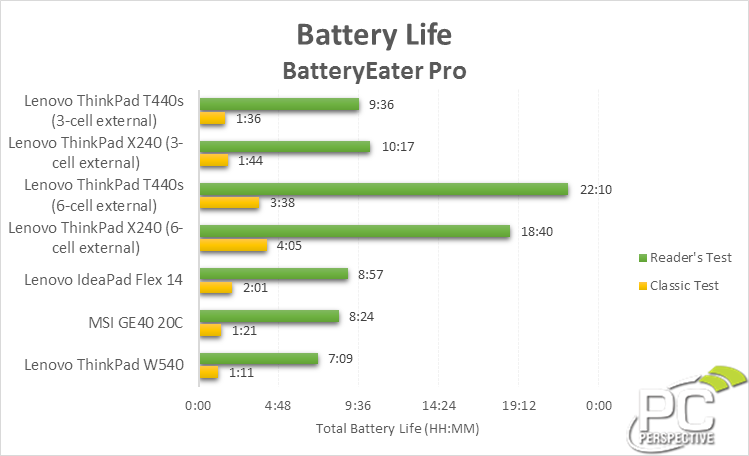 LG offers a laptop for those on a budget