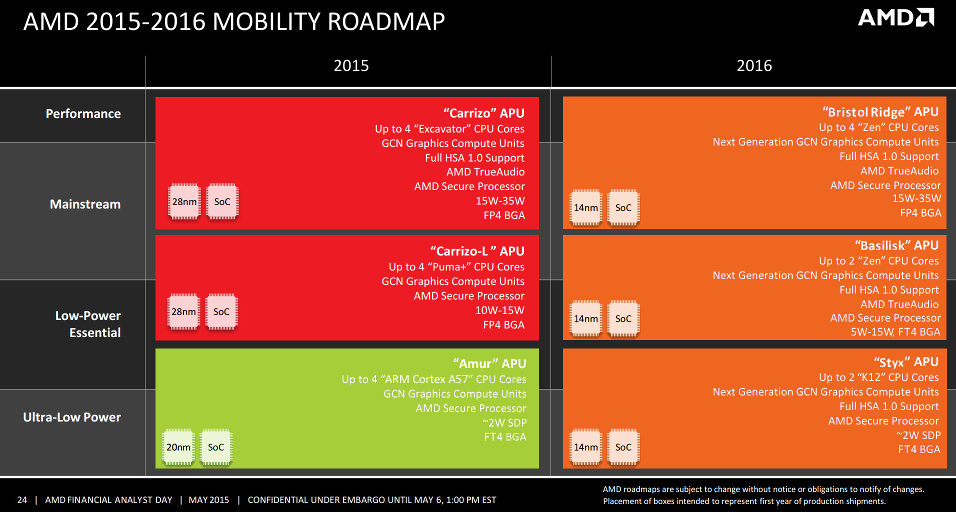 EDIT 2015-05-07: A day after the AMD analyst meeting we now know that the roadmaps delivered here are not legitimate.  While some of the information is likely correct on the roadmaps, they were not leaked by AMD.  There is no FM3 socket, rather AMD is going with AM4.  AMD will be providing more information throughout this quarter about their roadmaps, but for now take all of this information as "not legit".

SH SOTN has some eagle eyes and spotted the latest leaked roadmap for AMD.  These roadmaps cover both mobile and desktop, from 2015 through 2016.  There are obviously quite a few interesting tidbits of information here.

On the mobility roadmap we see the upcoming release of Carrizo, which we have been talking about since before CES.  This will be the very first HSA 1.0 compliant part to hit the market, and AMD has done some really interesting things with the design in terms of performance, power efficiency, and die size optimizations.  Carrizo will span the market from 15 watts to 35 watts TDP.  This is a mobile only part, but indications point to it being pretty competent overall.  This is a true SOC that will support all traditional I/O functions of older standalone southbridges.  Most believe that this part will be manufactured by GLOBALFOUNDIRES on their 28 nm HKMG process that is more tuned to AMD's APU needs.

Carrizo-L will be based on the Puma+ architecture and will go from 10 watts to 15 watts TDP.  This will use the same FP4 BGA connection as the big Carrizo APU.  This should make these parts more palatable for OEMs as they do not have to differentiate the motherboard infrastructure.  Making things easier for OEMs will give more reasons for these folks to offer products based on Carrizo and Carrizo-L APUs.  The other big reason will be the GCN graphics compute units.  Puma+ is a very solid processor architecture for low power products, but these parts are still limited to the older 28 nm HKMG process from TSMC.

One interesting addition here is that AMD will be introducing their "Amur" APU for the low power and ultra-low power markets.  These will be comprised of four Cortex-A57 CPUs combined with AMD's GCN graphics units.  This will be the first time we see this combination, and the first time AMD has integrated with ARM since ATI spun off their mobile graphics to Qualcomm under the "Adreno" branding (anagram for "Radeon").  What is most interesting here is that this APU will be a 20 nm part most likely fabricated by TSMC.  This is not to say that Samsung or GLOBALFOUNDRIES might be producing it, but those companies are expending their energy on the 14 nm FinFET process that will be their bread and butter for years to come.  This will be a welcome addition to the mobile market (tablets and handhelds) and could be a nice profit center for AMD if they are able to release this in a timely manner.

2016 is when things get very interesting.  The Zen x86 design will dominate the upper 2/3 of the roadmap.  I had talked about Zen when we had some new diagram leaks yesterday, but now we get to see the first potential products based off of this architecture.  In mobile it will span from 5 watts to 35 watts TDP.  The performance and mainstream offerings will be the "Bristol Ridge" APU which will feature 4 Zen cores (or one Zen module) combined with the next gen GCN architecture.  This will be a 14nm part, and the assumption is that it will be GLOBALFOUNDRIES using 14nm FinFET LPP (Low Power Plus) that will be more tuned for larger APUs.  This will also be a full SOC.

The next APU will be codenamed "Basilisk" that will span the 5 watt to 15 watt range.  It will be comprised of 2 Zen cores (1/2 of a Zen module) and likely feature 2 to 4 MB of L3 cache, depending on power requirements.  This looks to be the first Skybridge set of APUs that will share the same infrastructure as the ARM based Amur SOC.  FT4 BGA is the basis for both the 2015 Amur and 2016 Basilisk SOCs.

Finally we have the first iteration of AMD's first ground up implementation of ARM's ARMv8-A ISA.  The "Styx" APU features the new K12 CPU cores that AMD has designed from scratch.  It too will feature the next generation GCN units as well as share the same FT4 BGA connection.  Many are anxiously watching this space to see if AMD can build a better mousetrap when it comes to licensing the ARM ISA (as have Qualcomm, NVIDIA, and others).

2015 shows no difference in the performance desktop space, as it is still serviced by the now venerable Piledriver based FX parts on AM3+.  The only change we expect to see here is that there will be a handful of new motherboard offerings from the usual suspects that will include the new USB 3.1 functionality derived from a 3rd party controller. 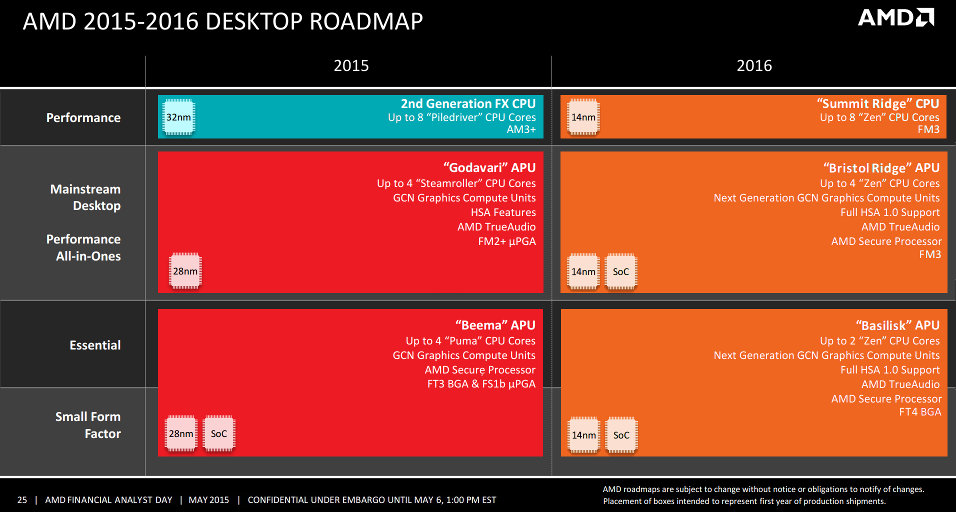 Mainstream and Performance will utilize the upcoming Godavari APUs.  These are power and speed optimized APUs that are still based on the current Kaveri design.  These look to be a simple refresh/rebadge with a slight performance tweak.  Not exciting, but needs to happen for OEMs.

Low power will continue to be addressed by Beema based APUs.  These are regular Puma based cores (not Puma+).  AMD likely does not have the numbers to justify a new product in this rather small market.

2016 is when things get interesting again.  We see the release of the FM3 socket (final proof that AM3+ is dead) that will house the latest Zen based APUs.  At the top end we see "Summit Ridge" which will be composed of 8 Zen cores (or 2 Zen modules).  This will have 4 MB of L2 cache and 16 MB of L3 cache if our other leaks are correct.  These will be manufactured on 14nm FinFET LPE (the more appropriate process product for larger, more performance oriented parts).  These will not be SOCs.  We can expect these to be the basis of new Opterons as well, but there is obviously no confirmation of that on these particular slides.  This will be the first new product in some years from AMD that has the chance to compete with higher end desktop SKUs from Intel.

From there we have the lower power Bristol Ridge and Basilisk APUs that we already covered in the mobile discussion.  These look to be significant upgrades from the current Kaveri (and upcoming Godavari) APUs.  New graphics cores, new CPU cores, and new SOC implementations where necessary.

AMD will really be shaking up the game in 2016.  At the very least they will have proven that they can still change up their game and release higher end (and hopefully competitive) products.  AMD has enough revenue and cash on hand to survive through 2016 and 2017 at the rate they are going now.  We can only hope that this widescale change will allow AMD to make some significant inroads with OEMs on all levels.  Otherwise Intel is free to do what they want and what price they want across multiple markets.