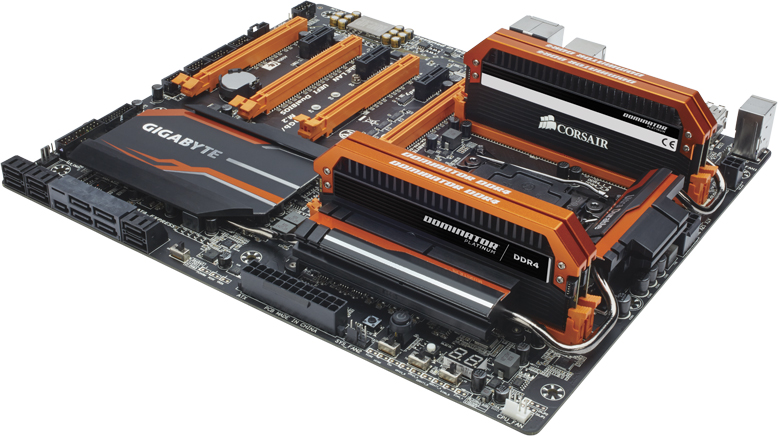 The Corsair Dominator Platinum memory modules come standard with the Dominator DMX-style heat spreader, consisting of a black aluminum plate of both sides of the module, capped with a black passive sink and an orange colored clip. The front of the modules feature the Dominator Platinum series logo and rated speed, while the back shows the memory specifications, including voltage, timing, and speed ratings. The included memory modules are DDR4 modules with 288 gold plated connection pins. 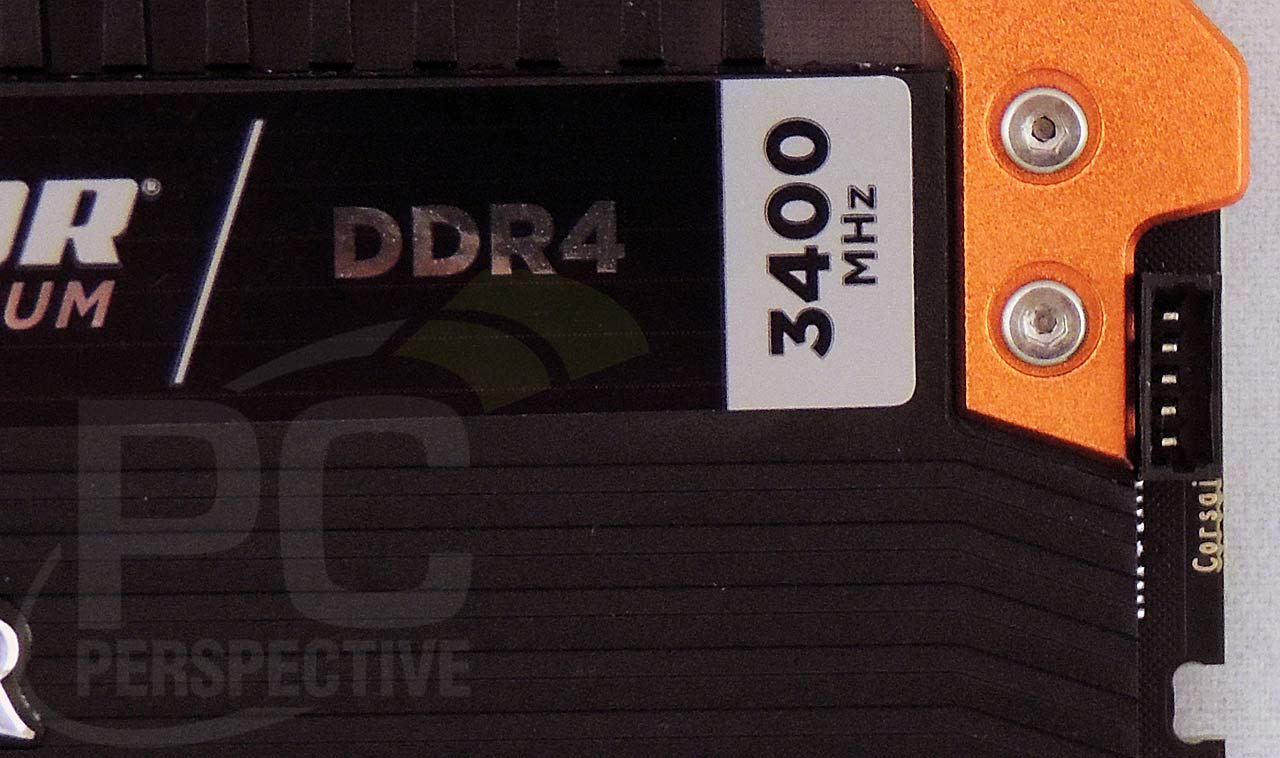 The top of the orange clip is branded with the module series and type (Dominator DDR4). The clip sits directly over the upper heat sink, forming an air channel and holding it in place. Along the upper right front of the module is a Corsair Link Interface port, which can be used to monitor module temperature and voltage when connected to the optional Corsair Link module. 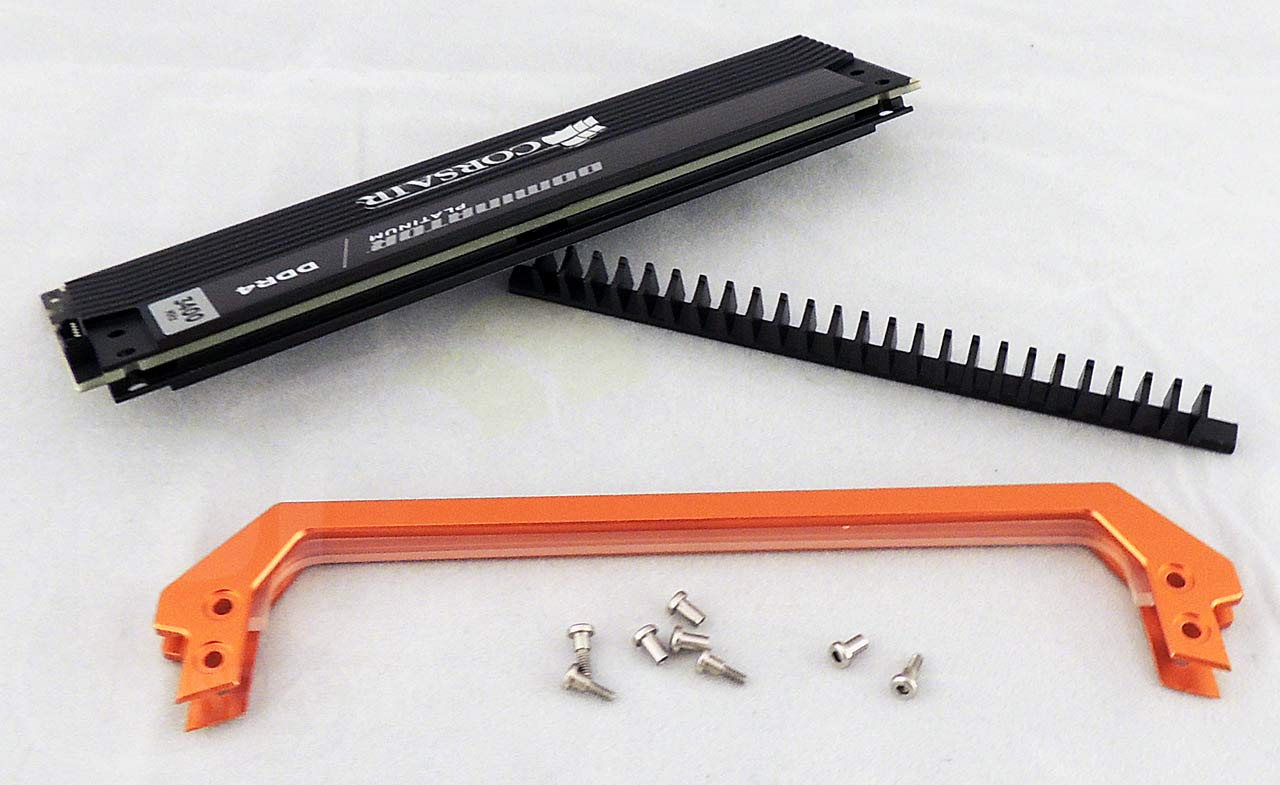 The module's top clip is held in place by four sets of screws with a threaded shaft on one side and hole on the other. The clip fixes the side plates in place, as well as the light bar and the upper heat sink. With the screws removed, the module separates into four part in total – the module itself, the upper heat sink, the aluminum clip, and the light bar (clear bar shown sitting inside of the clip). The light bar sits on top of LEDs integrated into the upper right and left sides of the module, providing an under-lighting effect to the clip. The heat spreader plates on the sides of the module were fixed in place very well, to the point that I was unable to remove them using my vast array of iFixIt tools. 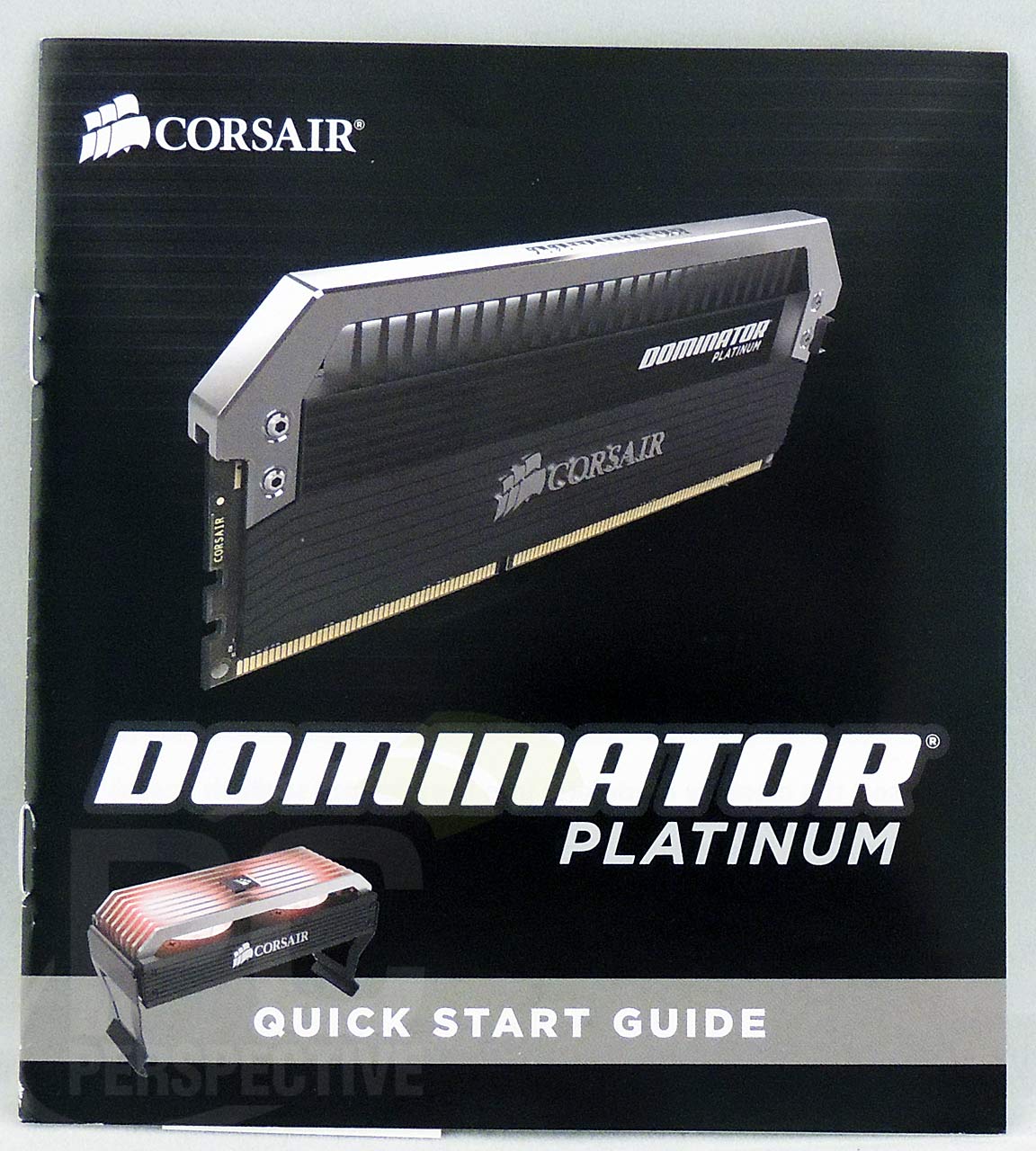 Corsair includes a comprehensive manual with the kit, describing how to construct and install the included fan units as well as instructions for installing and using the memory modules. 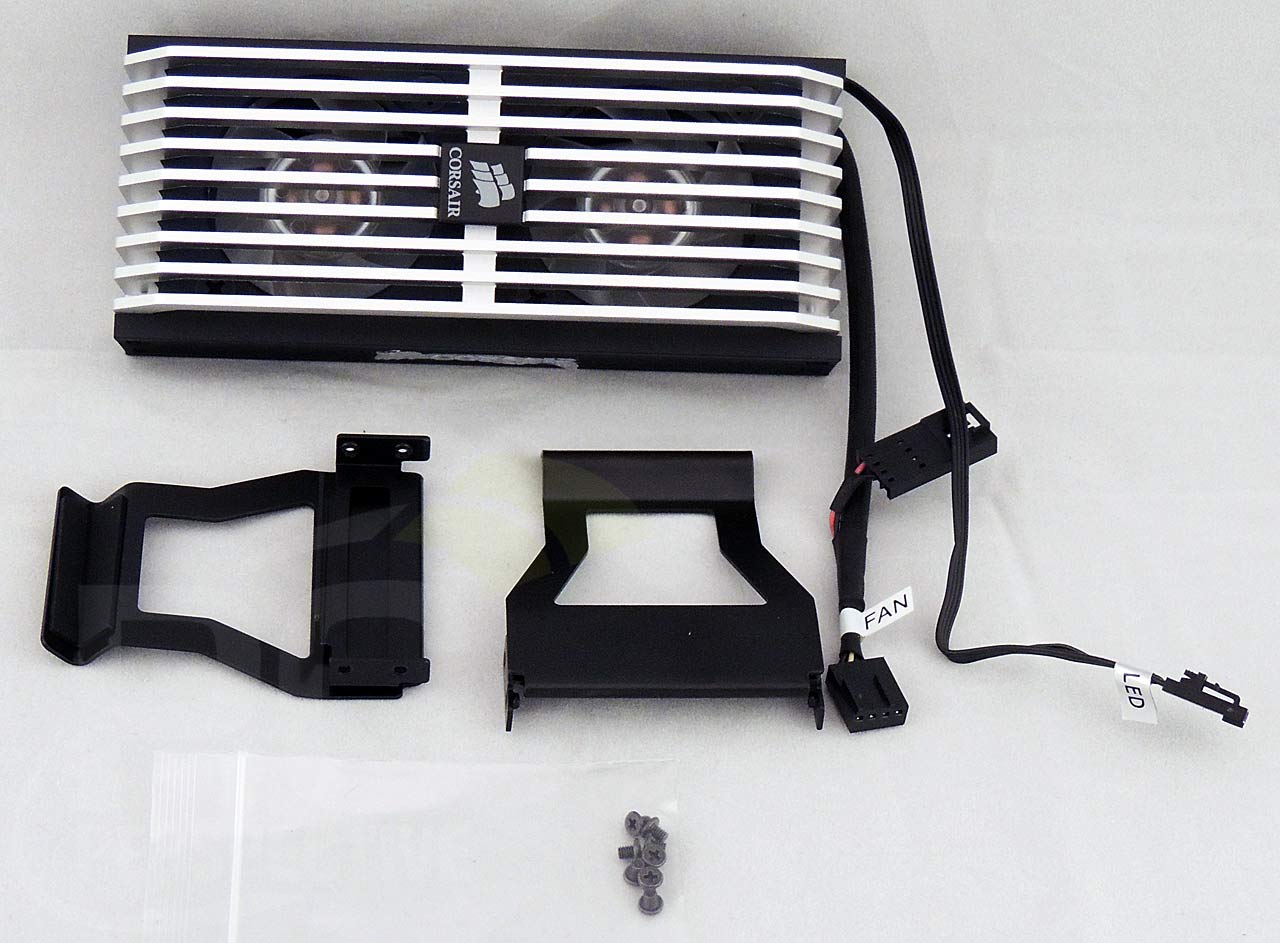 The Dominator Platinum Memory Fan kits include the body unit, two aluminum clips, and the screws used in the unit's construction. The unit itself is colored silver and black, a neutral color combination sure to blend well with your system's aesthetics. 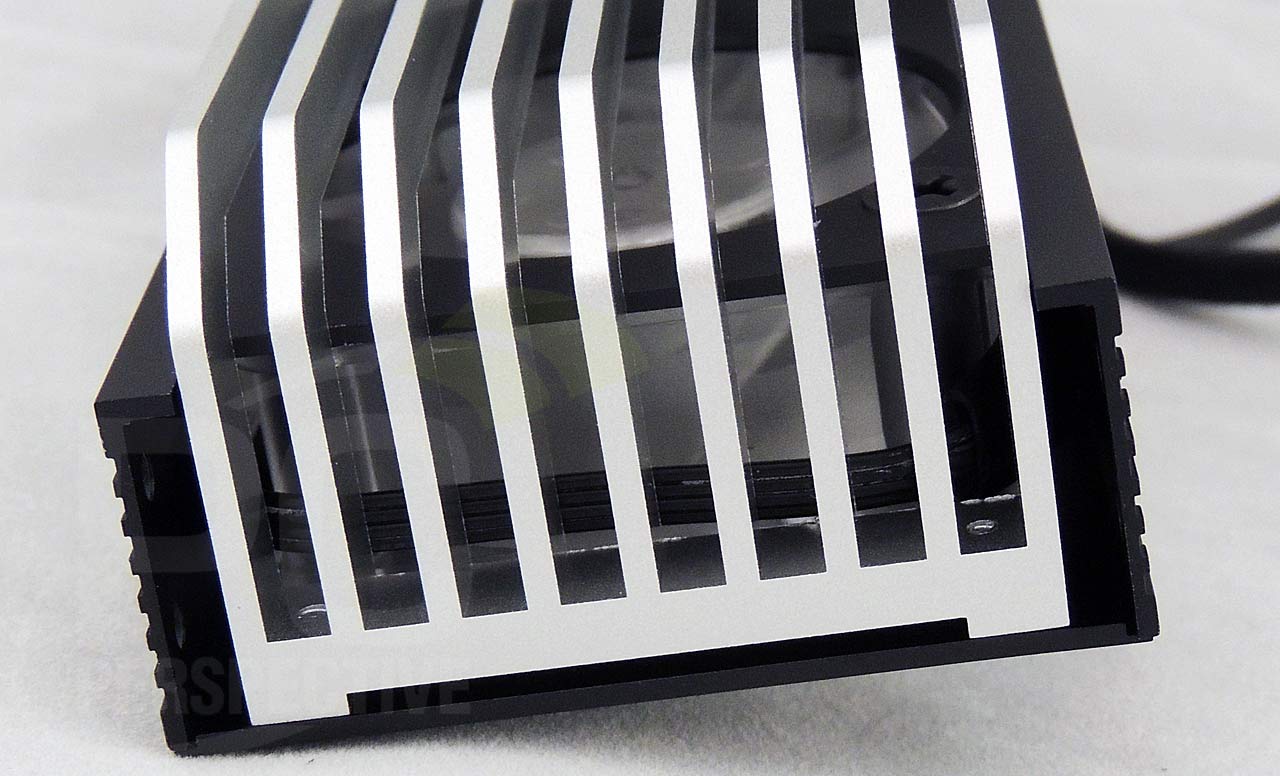 The body of the fan kit houses two 50mm fans, oriented to pull air in through the top of the unit and blow the air down across the memory modules. The fans are LED type fan, housing orange colored LEDs to match the orange coloration of the module upper clips. Silver fan guards sit over the fans with a Corsair corporate logo sitting int the top center of the grill and along the unit's side. The fan guards arch around the side of the unit to expose the clear sides of the fan, further adding to ambient illumination from the fan LEDs. 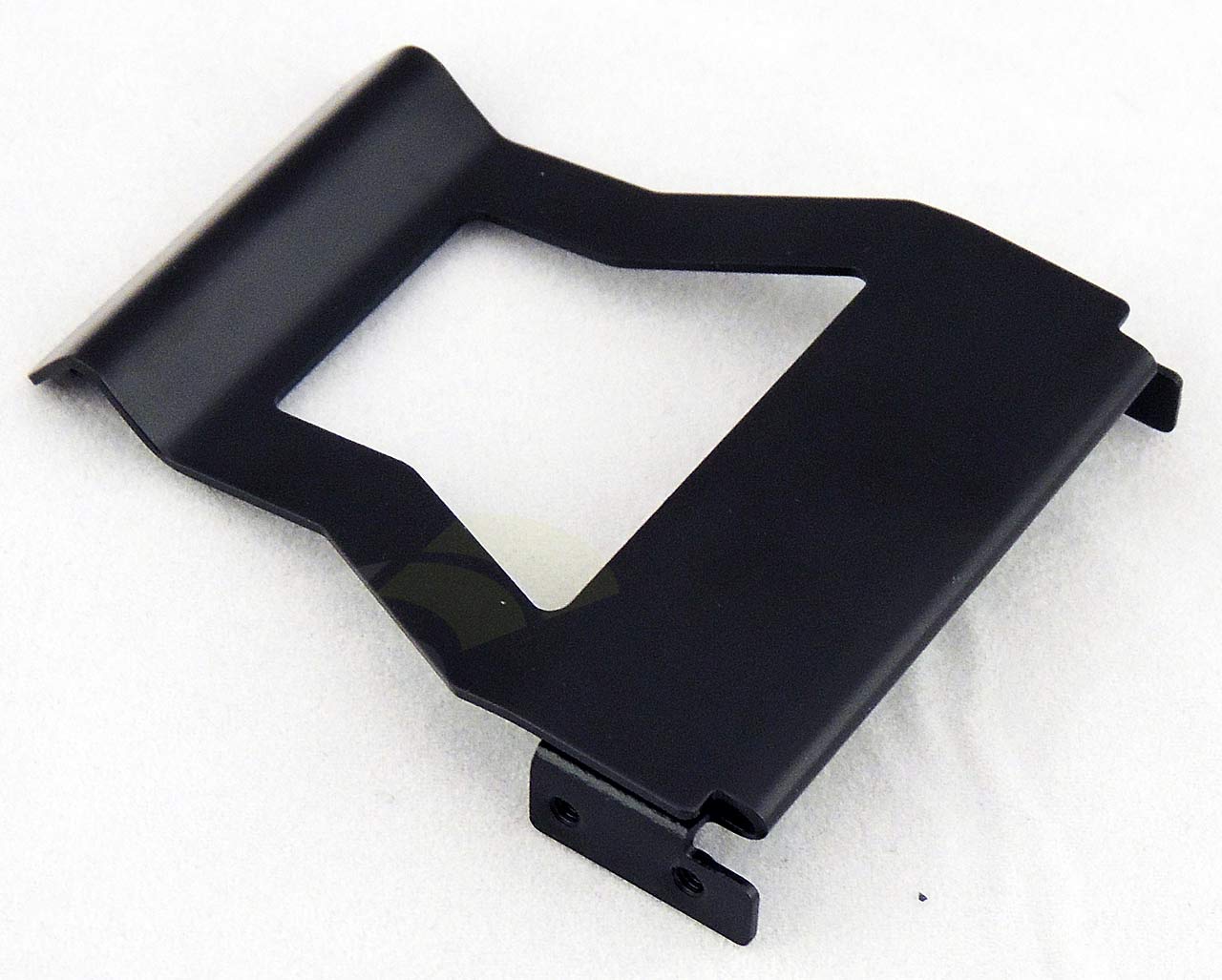 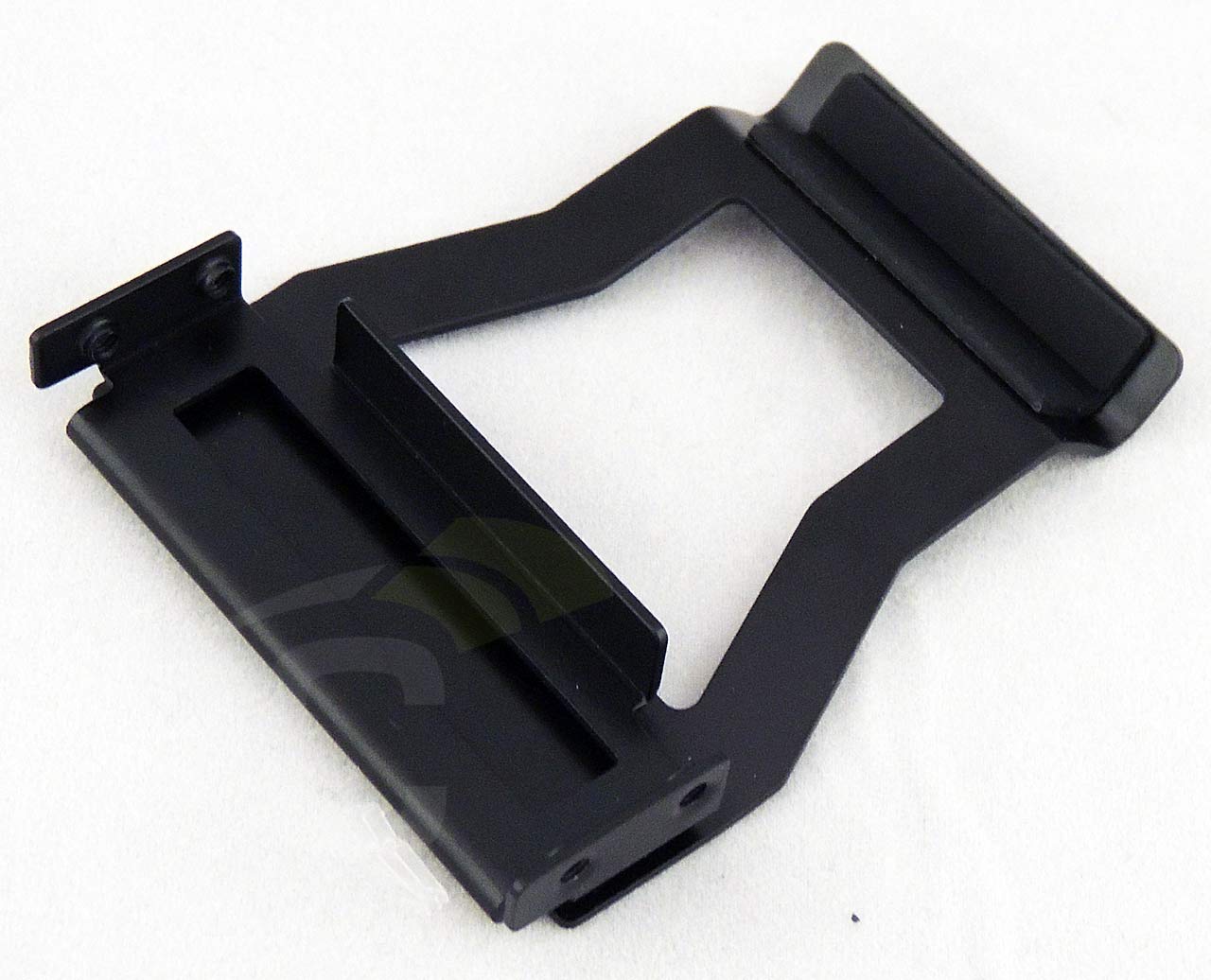 The included clips are colored black to match the module heat spreader coloration. The aluminum side clips fit into the sides of the base unit fitting the horizontal tongue in the top of the clip into a lower side groove, the vertical tabs fitting into vertical groves, and held in place with four screws through the base wall and into tabs on the sides of the clip. The inside bottom of the clip is V-shaped and padded to fit over the board's memory slot clips. 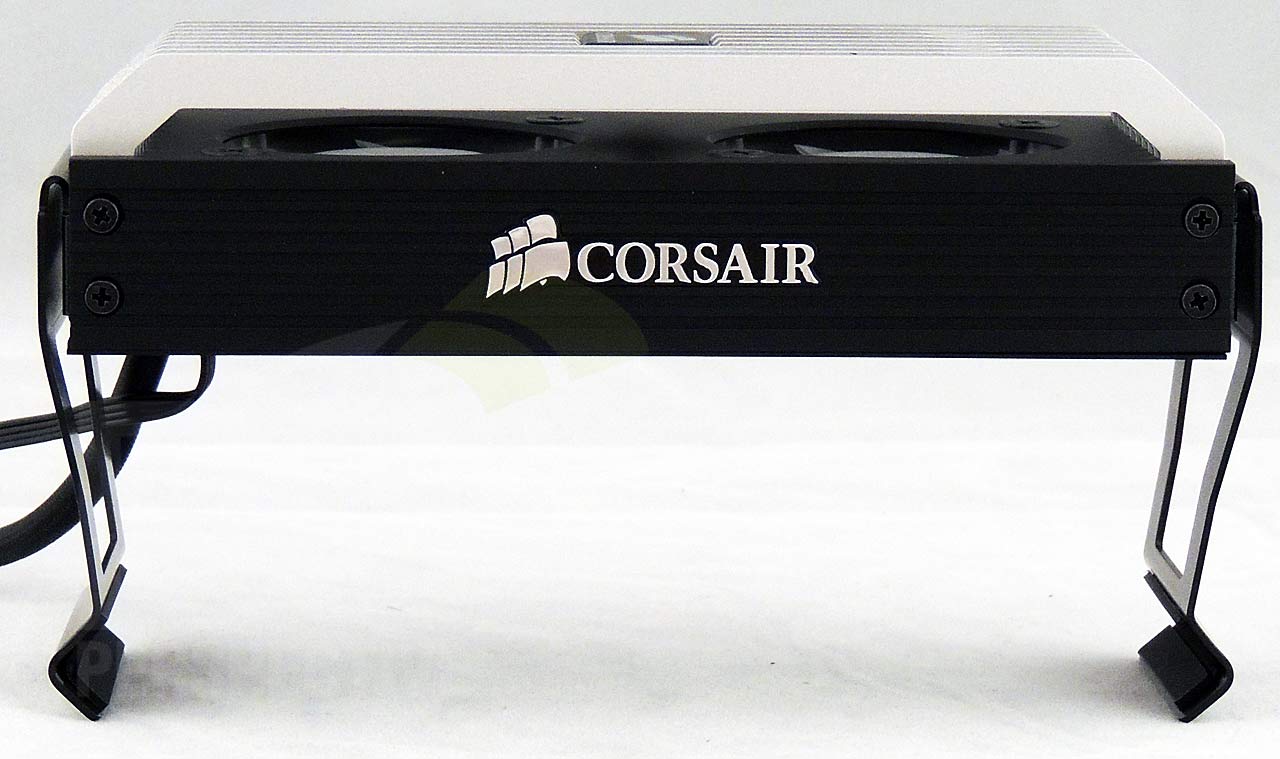 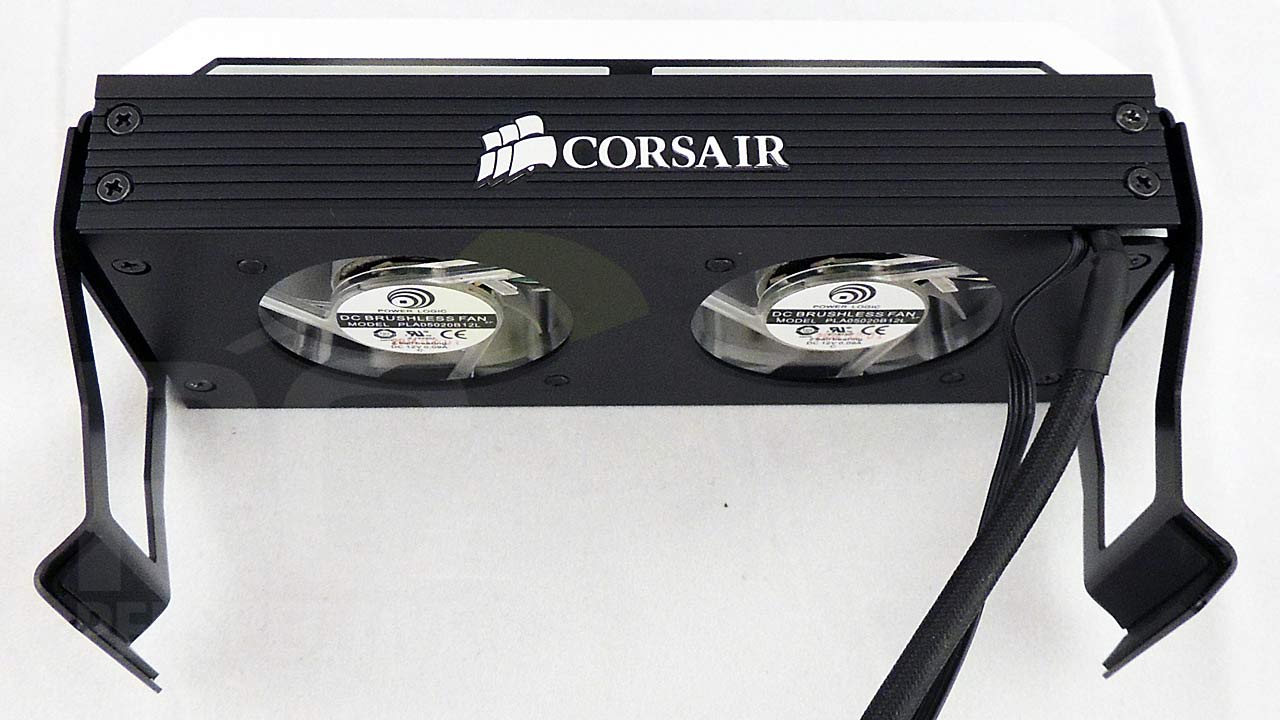 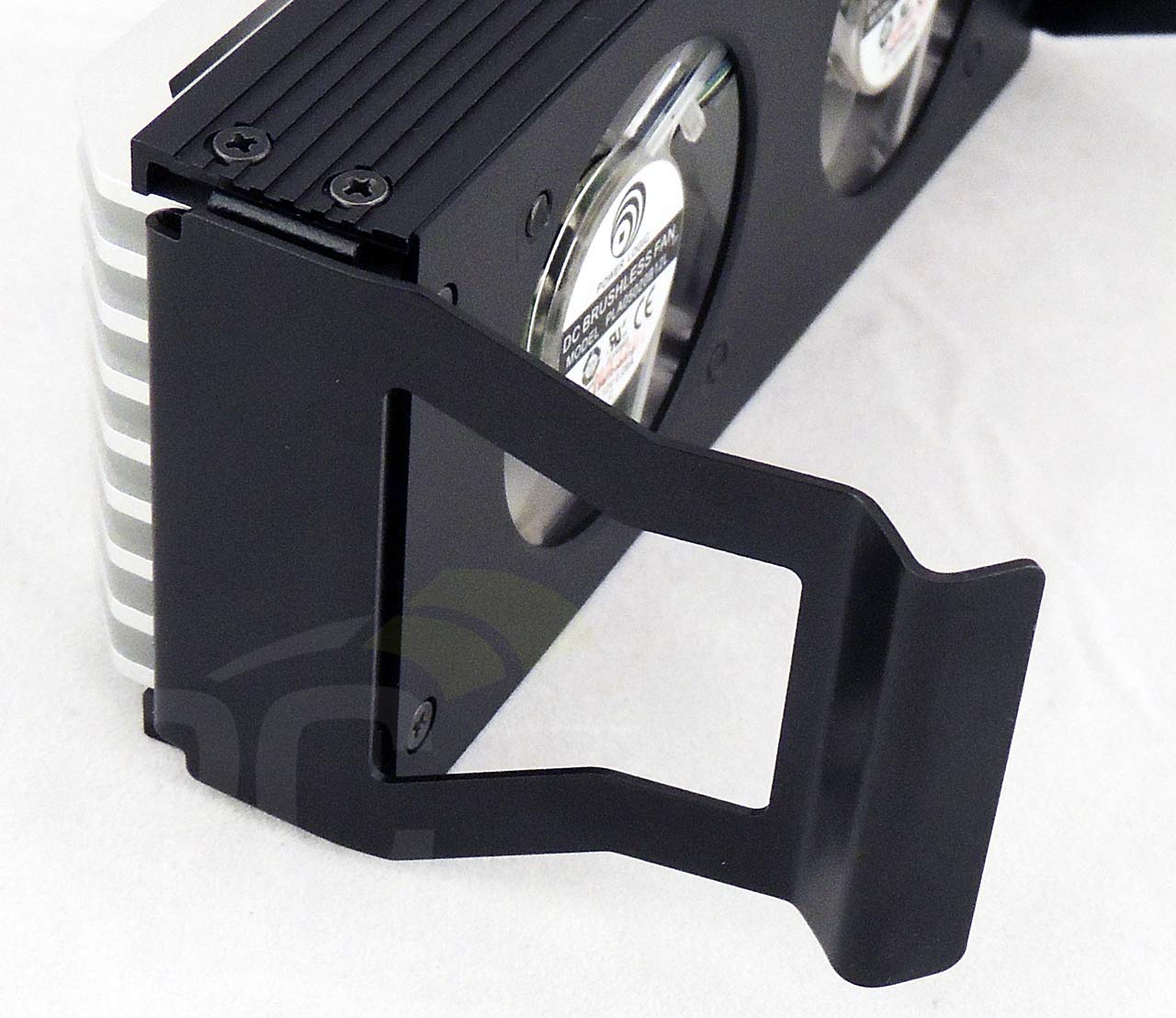 The fan kits assemble by fixing the clips in place on the body using the provided screws. The top of the clips fit into grooved built into the sides of the body with the padded V-shaped ends oriented away from the body. The unit stands upright with the unprotected side of the fans facing downward towards the memory modules. 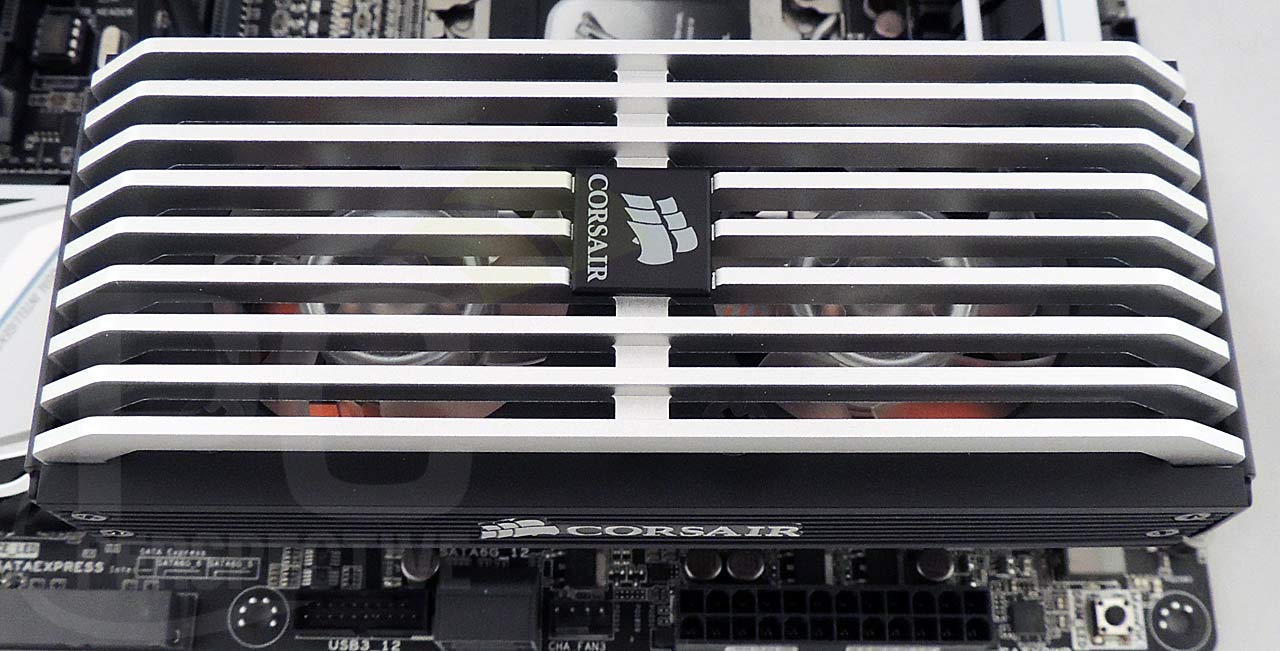 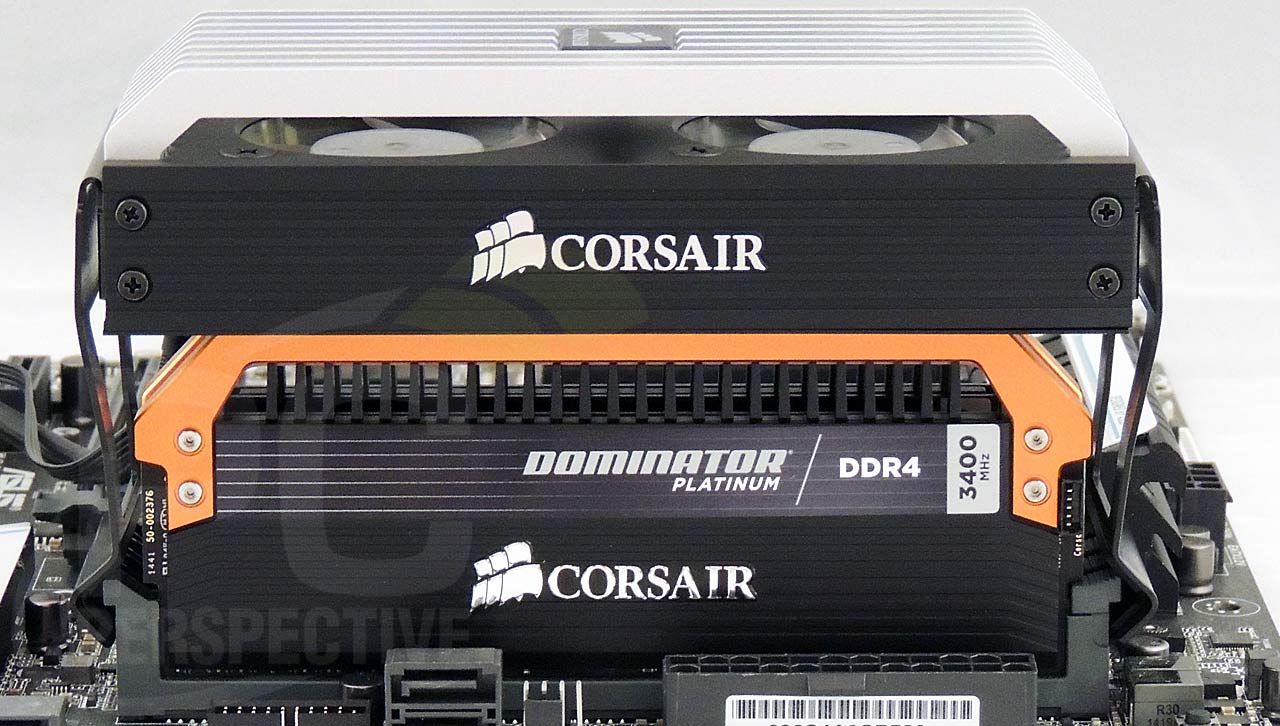 One thing to keep in mind when mounting these modules in the board is that they are very tall because of the integrated upper heat sink and clip. Using the included Dominator Platinum Memory Fan kits to cool the modules adds further to the height of the assembly. However, the fan kit sits almost flush with the top of the module, ensuring minimal wasted vertical space and optimal cooling effects. 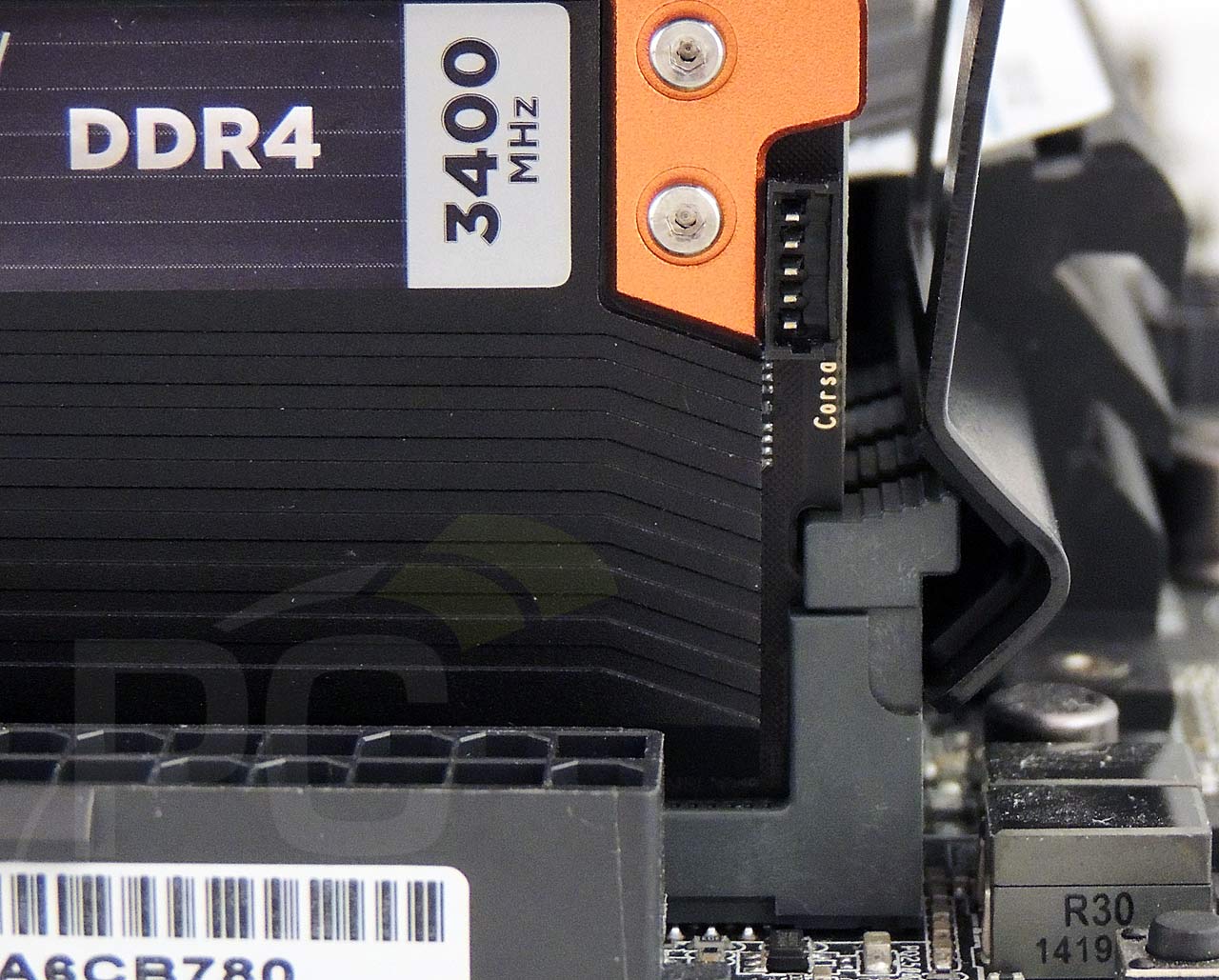 As shown in the installation pic, the Corsair Link Interface port sits high enough so that it does not interfere with module insertion into the board slots nor so the slots inhibit the ports use. However, it may be tricky to use the port where the port is sandwiched in between inserted memory sticks.

If you could overclock them, they would be too easily spotted 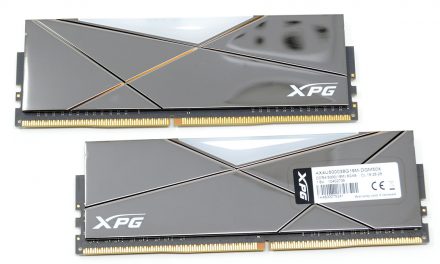