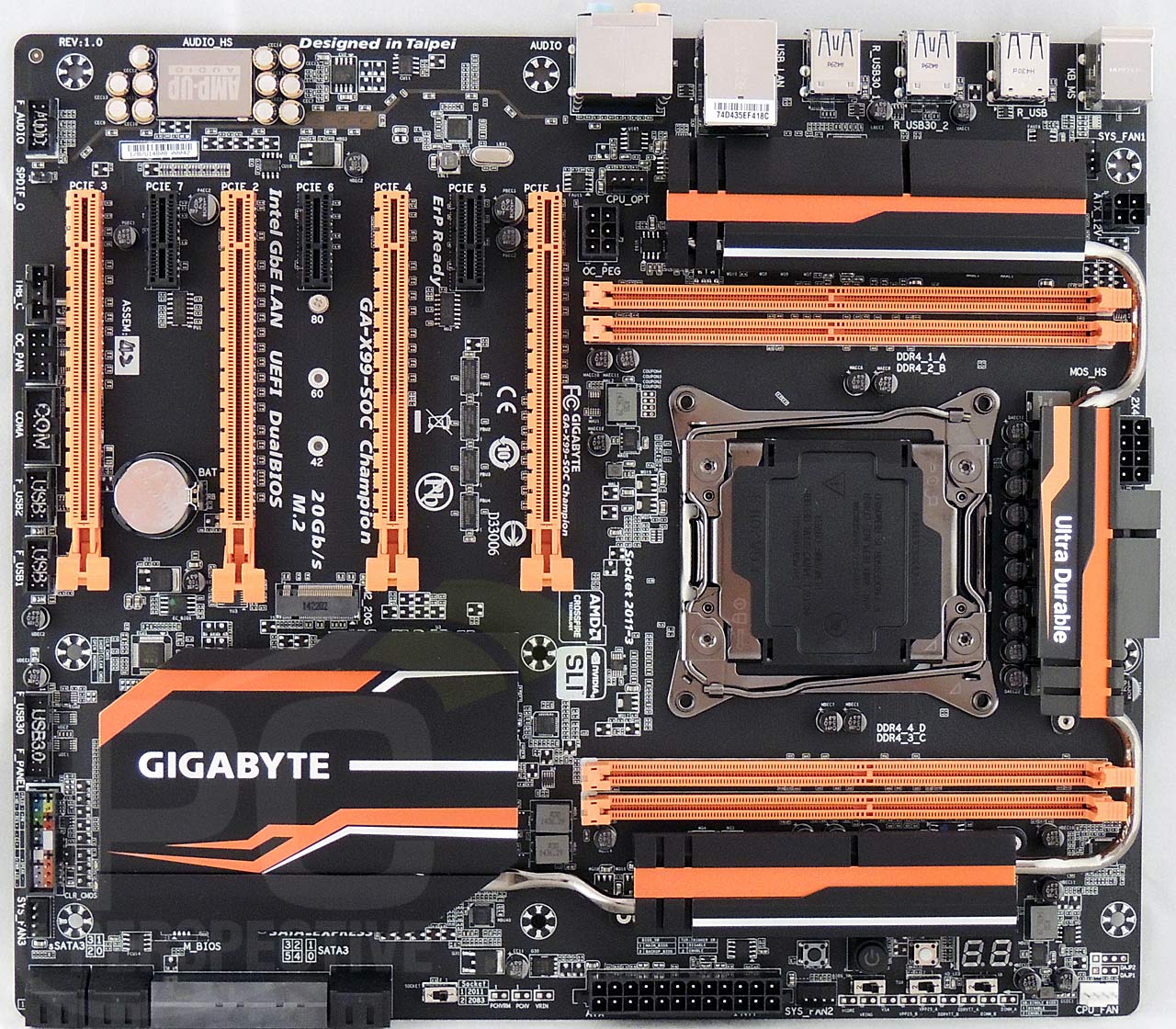 As part of the GIGABYTE Overclocking series, the X99-SOC Champion motherboard features a black and orange theme. The heat sinks are black colored with orange accents and the audio PCB divider line glows bright orange as well. In addition, the audio divider line contains an embedded SOC logo that glows with the board powered. The board's EATX form factor and cut-down feature set gives all the integrated features and components more than enough breathing room, making the board easy to work on. 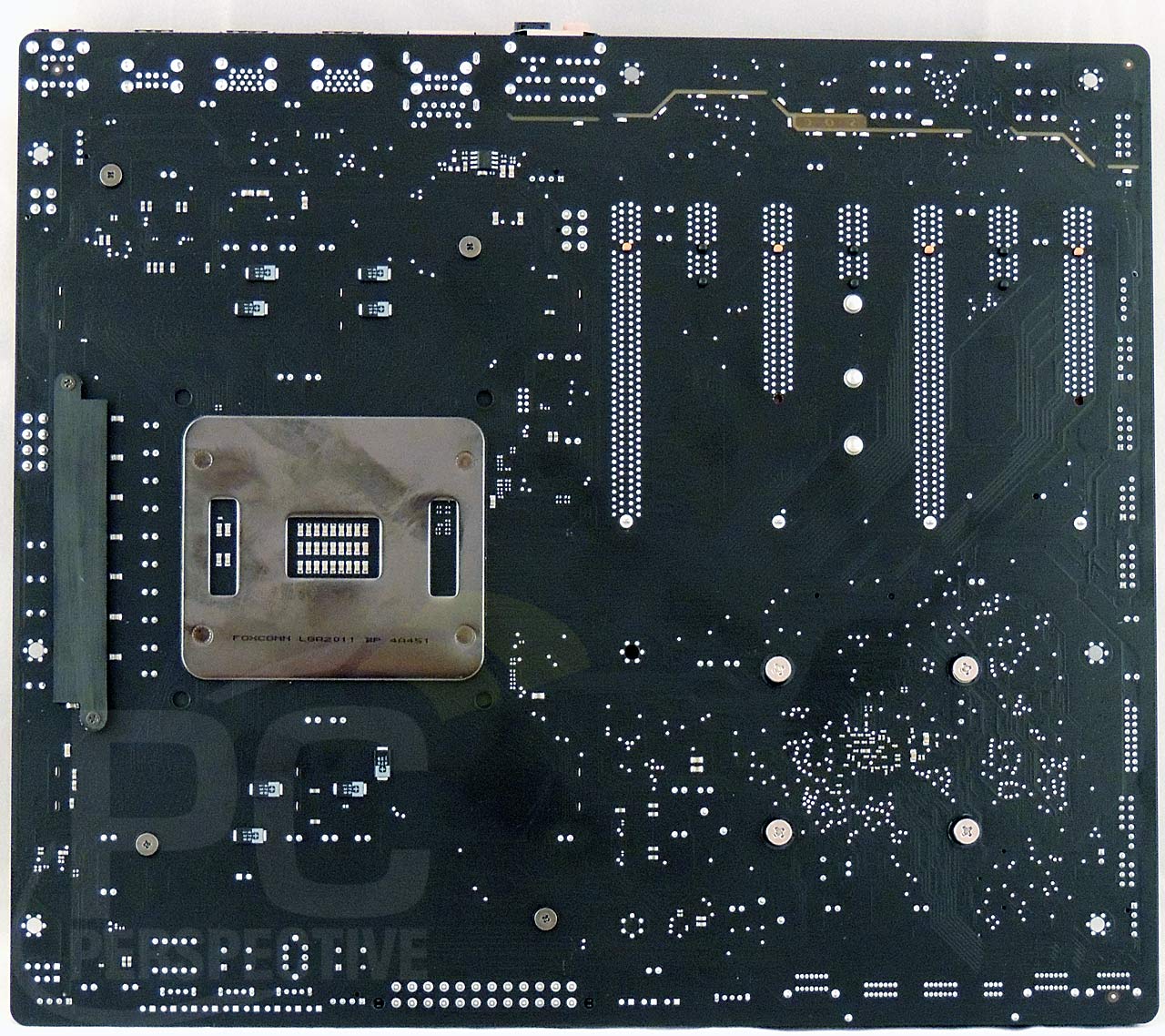 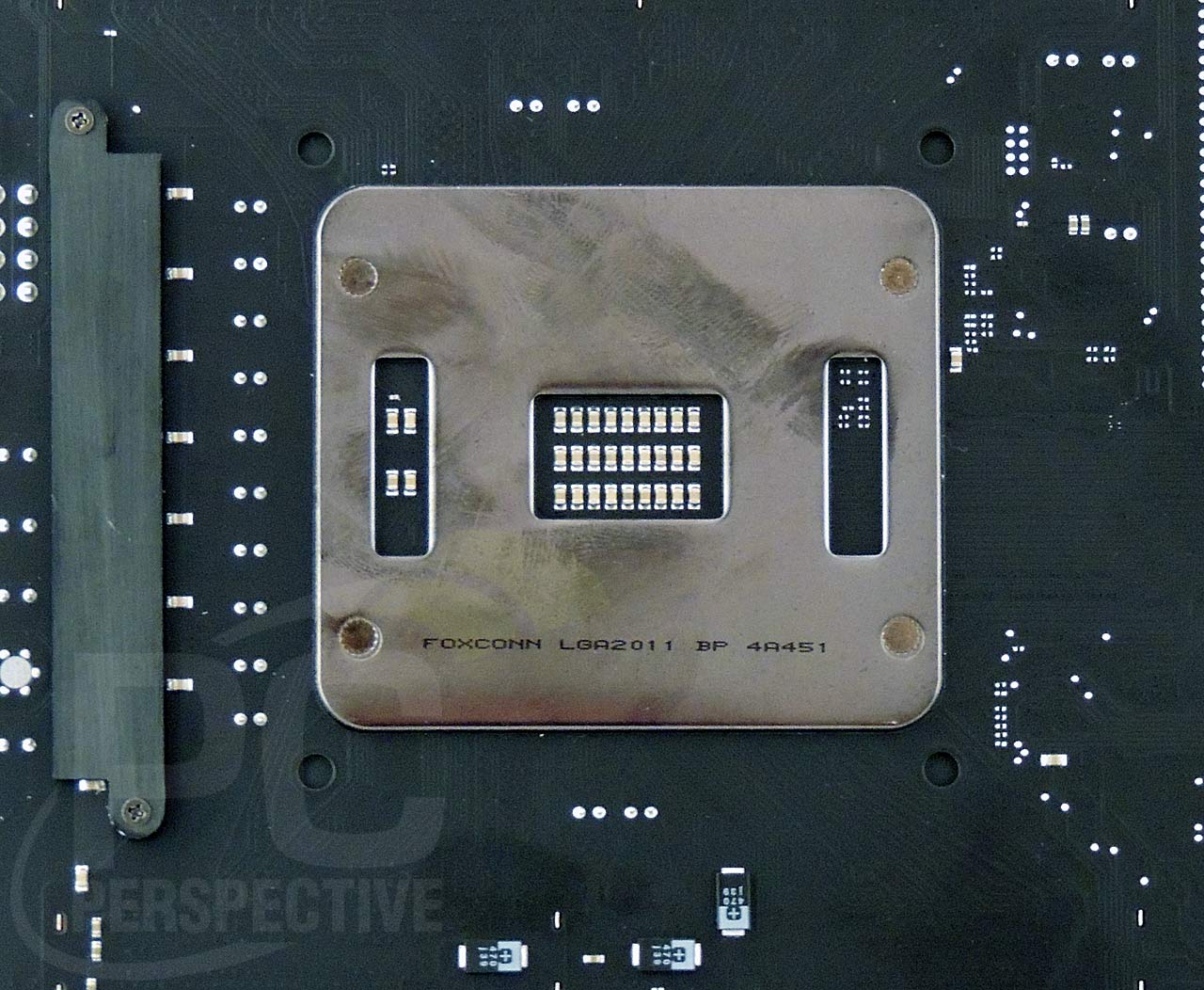 The backside of the X99-SOC Champion is almost entirely free of unprotected components with a few capacitors above and below the CPU socket area (well away from the CPU socket though). The area located directly beneath the CPU power phases is covered by an aluminum heat spreader offering a secondary cooling path as well as protection to those sensitive components. 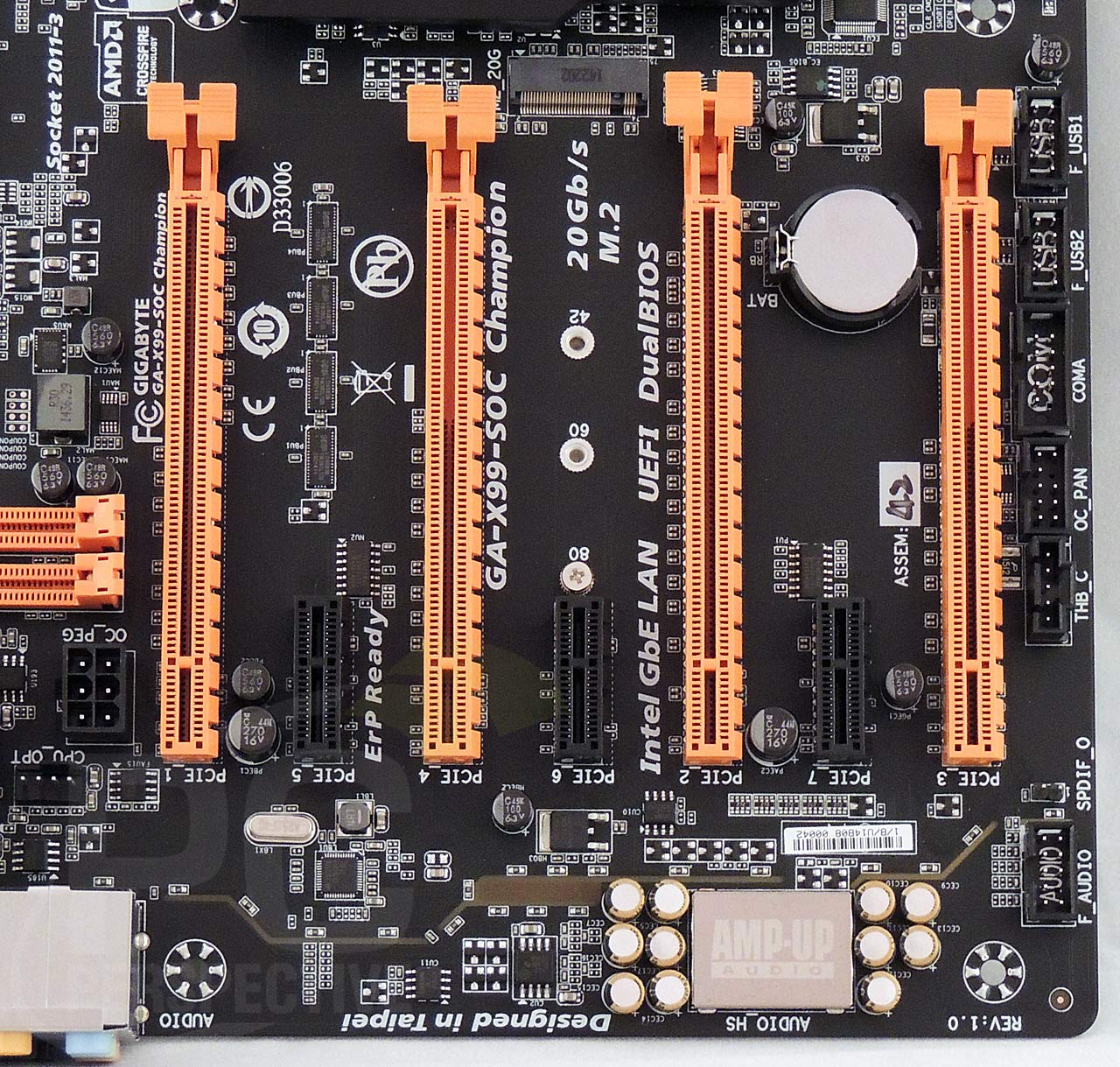 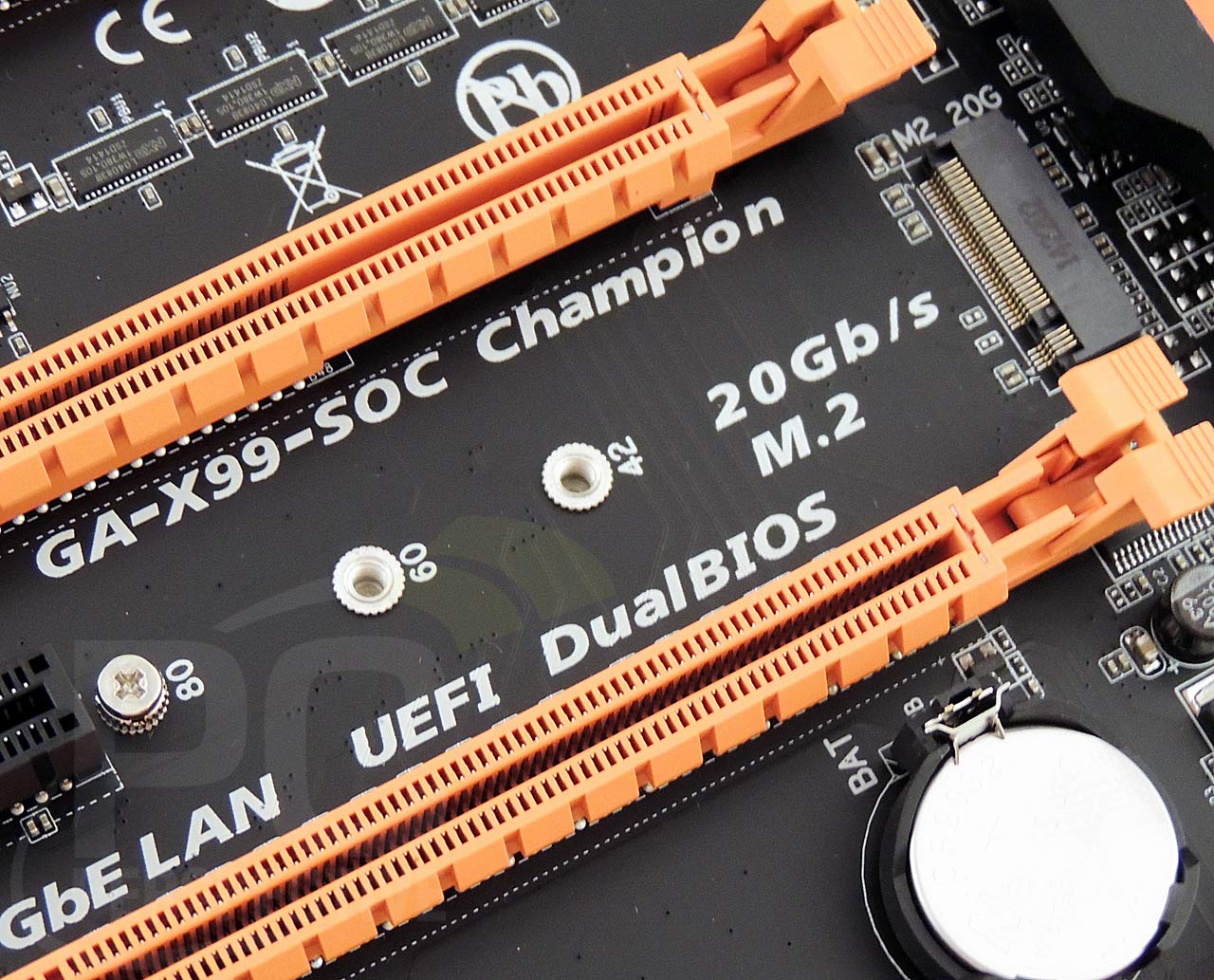 The integrated M.2 PCIe x4 port is located in between the lower portions of PCIe slots 2 and three. The CMOS battery is located in between the bottom of PCIe x16 slots 3 and 4. The board supports M.2 PCIe SSDs up to 80mm in length. Note that the M.2 and the SATA Express port share bandwidth and are designed to be mutually exclusive. However, SATA ports 4 and 5 can be used individually (just not in SATA-Express mode) with an M.2 device installed in the board.

GIGABYTE designed the audio subsystem on a separate PCB to ensure audio clarity and fidelity. The PCB separator line glows orange along its length when the board is powered, making for a nice effect in-line with the board's color scheme. In the middle of the PCB line is an embedded SOC logo that glows as well, making for a nice add-on. The Realtek audio chipset is capped with a metal heat sink located in the upper left corner of the board for signal shielding purposes. The front panel audio and S/PDIF output headers are located the upper left corner of the audio PCB, to the left of the audio chipset. 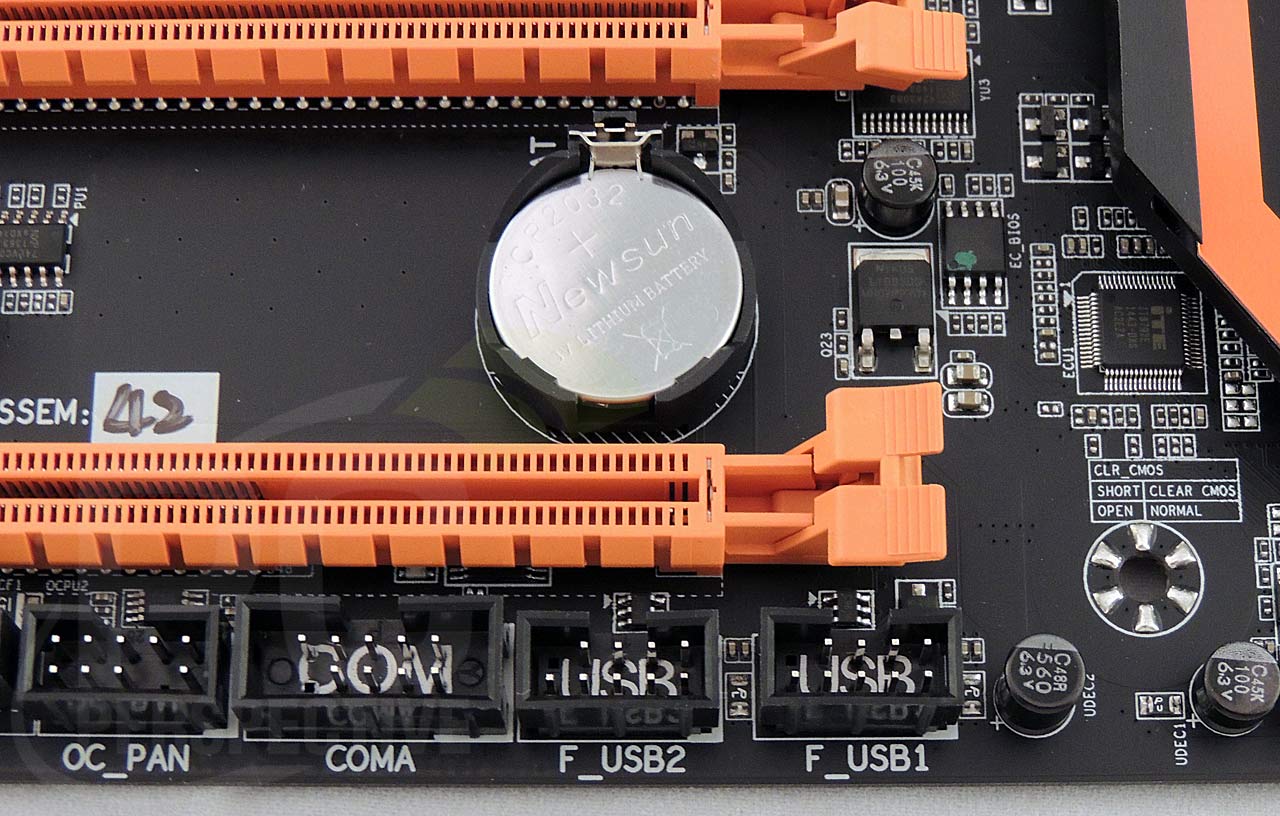 The serial port header and integrated USB 2.0 headers are located along the lower outside edge of PCIe x16 slot 4. The CMOS battery is located in between the lower portions of PCIe X16 slots 3 and 4, to the right of the USB 2.0 headers.

The USB 3.0 header, CMOS clear jumper, front panel header, and a system fan header are located in the lower left corner of the board. 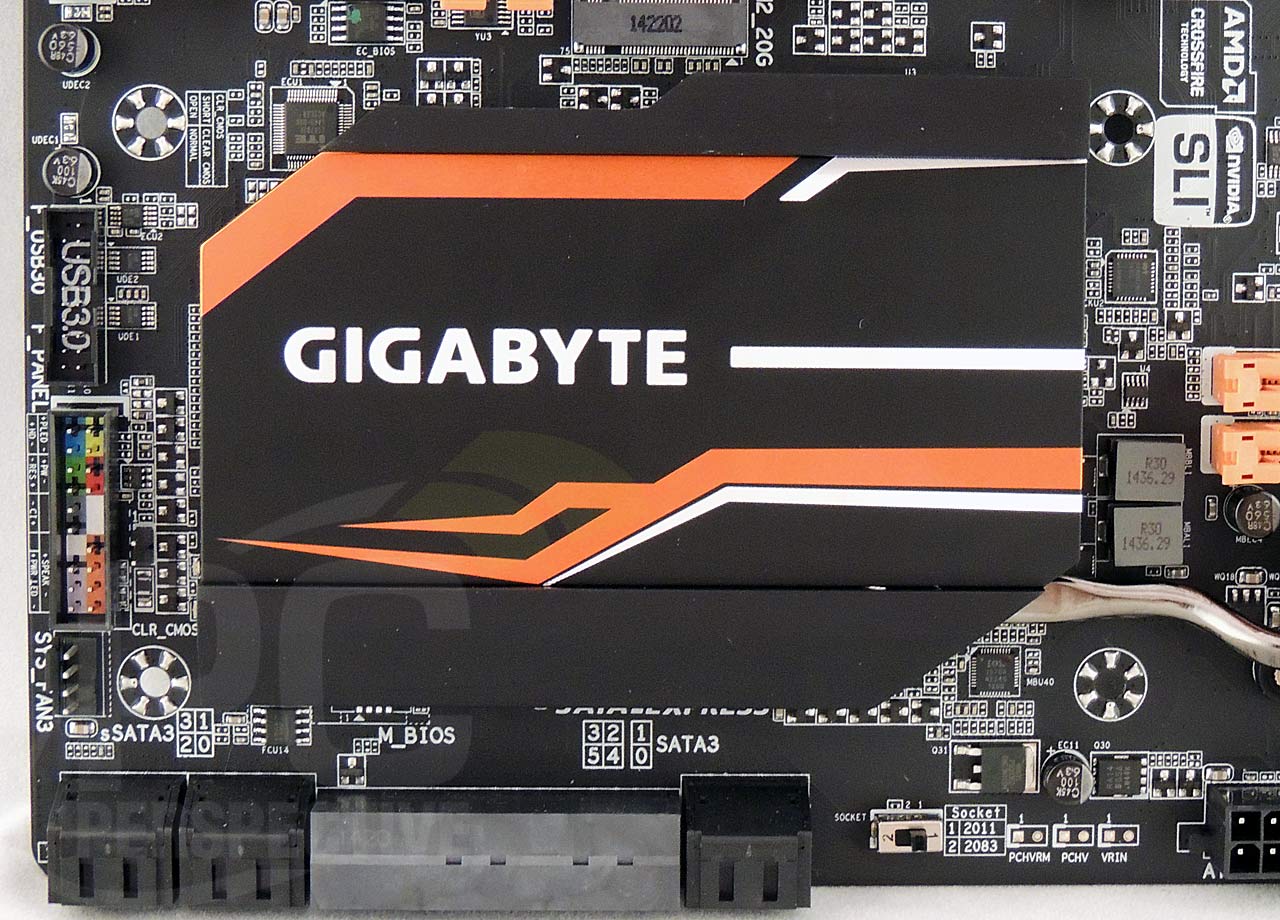 The Intel X99 chipset is covered by a large aluminum heat sink with the GIGABYTE corporate logo embedded into its surface. The heat sink is low profile and acts as a terminating end for the heat pipe connecting the board's various heat sinks. 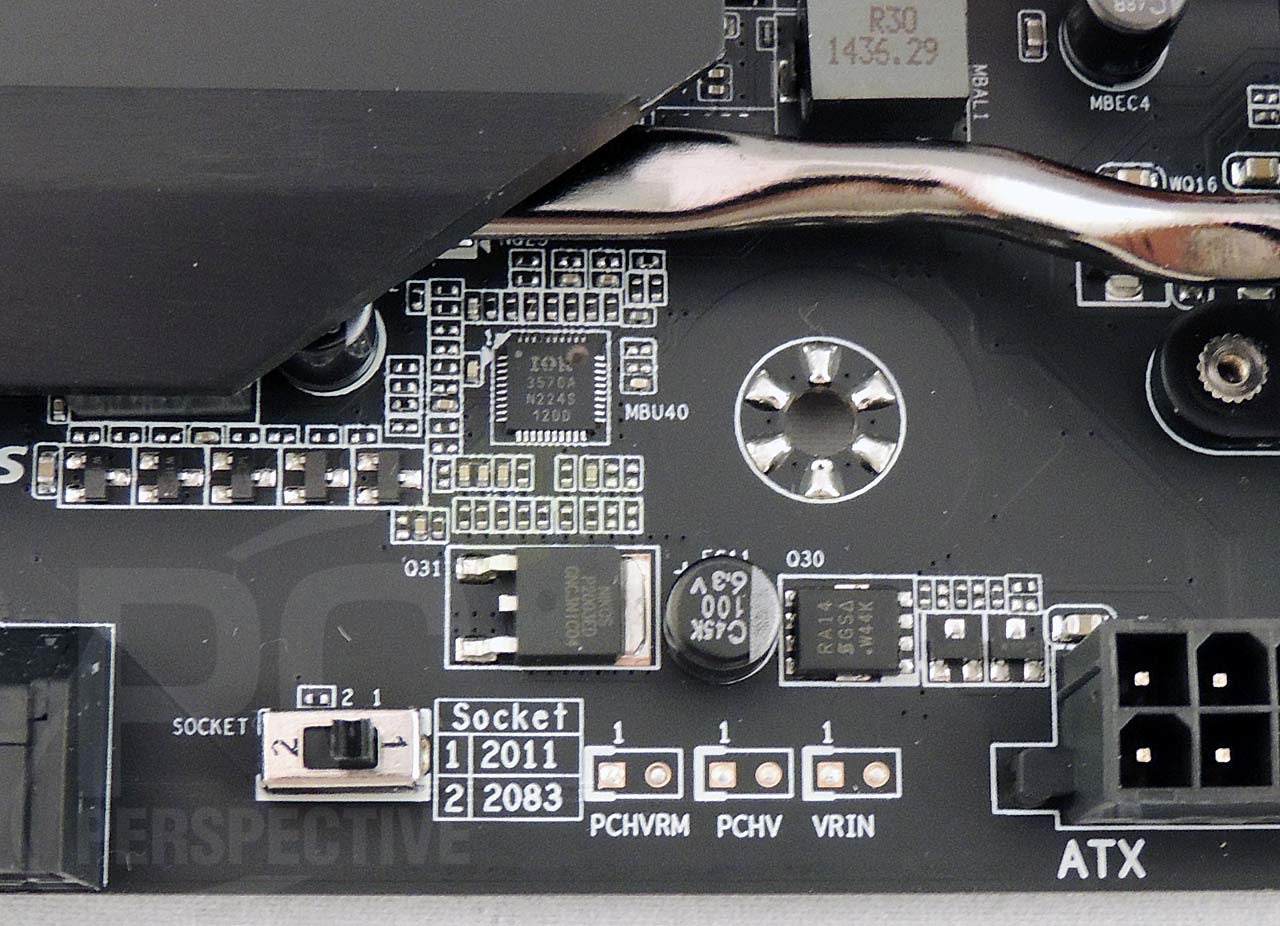 The CPU Mode switch and chipset and voltage regulator voltage measurement points are located to the lower right of the Intel X99 chipset cooler. The CPU Mode switch activates the extra overclocking pins in the CPU socket when enabled (set to the 2 position to the left).

GIGABYTE designed the X99-SOC Champion board with a total of eight SATA 6 Gb/s ports and one SATA-Express 10 Gb/s port. The SATA-Express port house two SATA 6 Gb/s ports that can be used as stand alone ports as well. TNote that the M.2 and the SATA Express ports share bandwidth and are designed to be mutually exclusive. However, the SATA ports 4 and 5 ports can be used individually with the M.2 port in use. 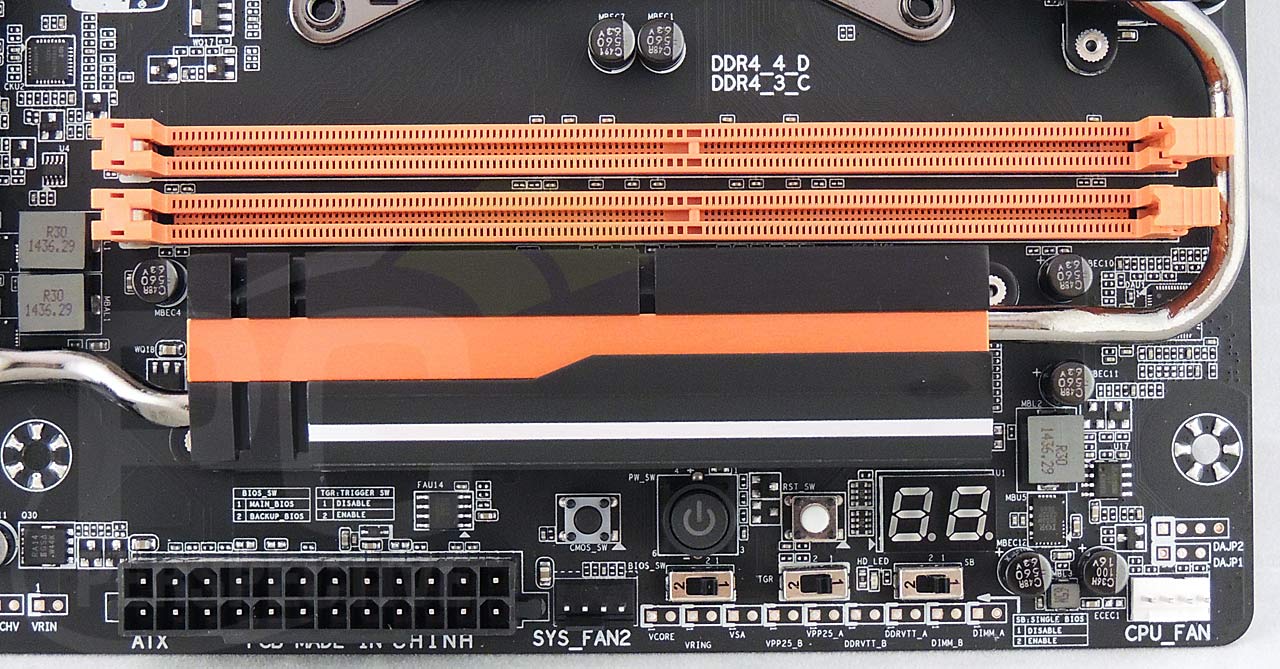 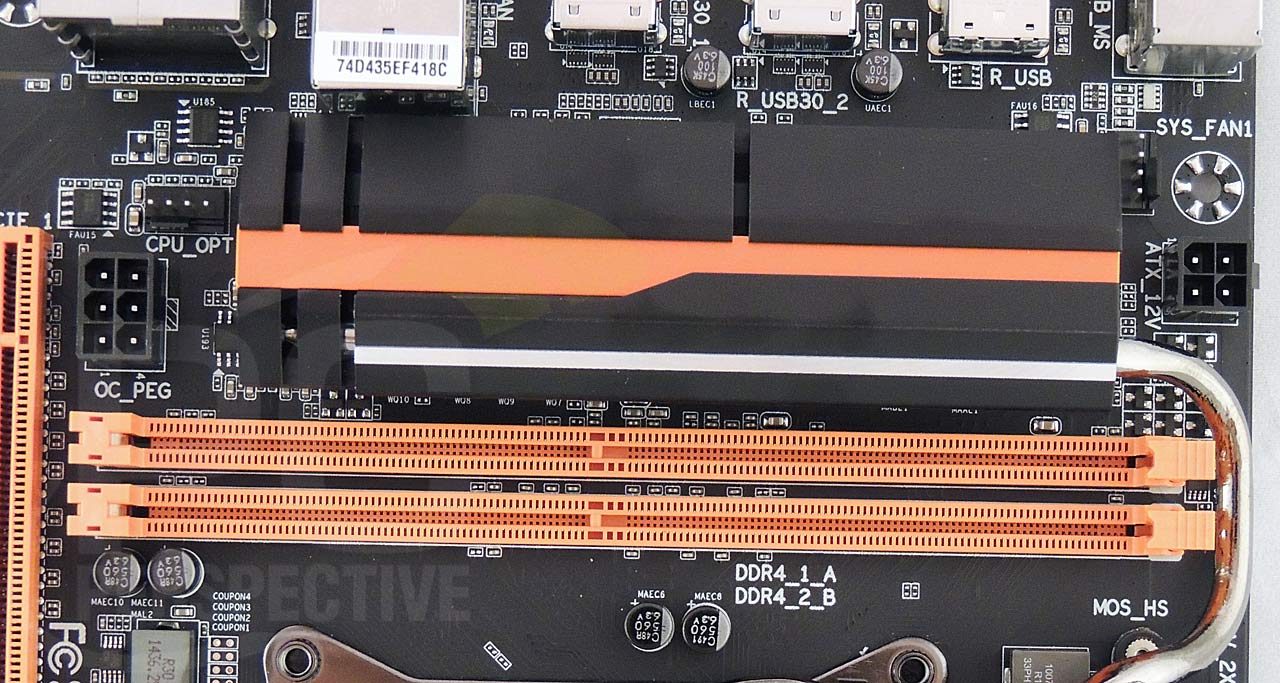 One of the big optimizations GIGABYTE designed into the X99-SOC Champion board was with the DDR4 memory slots. They included only four slots and placed them closer in proximity to the CPU socket then seen on other Intel X99 based boards. This opens up some on board space, but also makes for shorter electrical routes between the CPU, it's integrated memory controller, and the memory modules. Further, GIGABYTE designed the board with highly optimized trace paths to allow for insane memory overclocking potential (such as that seen with the specially designed Corsair Dominator Platinum DDR4-3400 memory kit). Quad Channel memory mode is enabled with memory modules seated in all four integrated memory slots. Note that memory speeds above 2133MHz are considered overclocked speeds and are outside of the official Intel stock memory speed specifications. The 24-pin ATX power port is located to the lower left of the lower DIMM slot set. 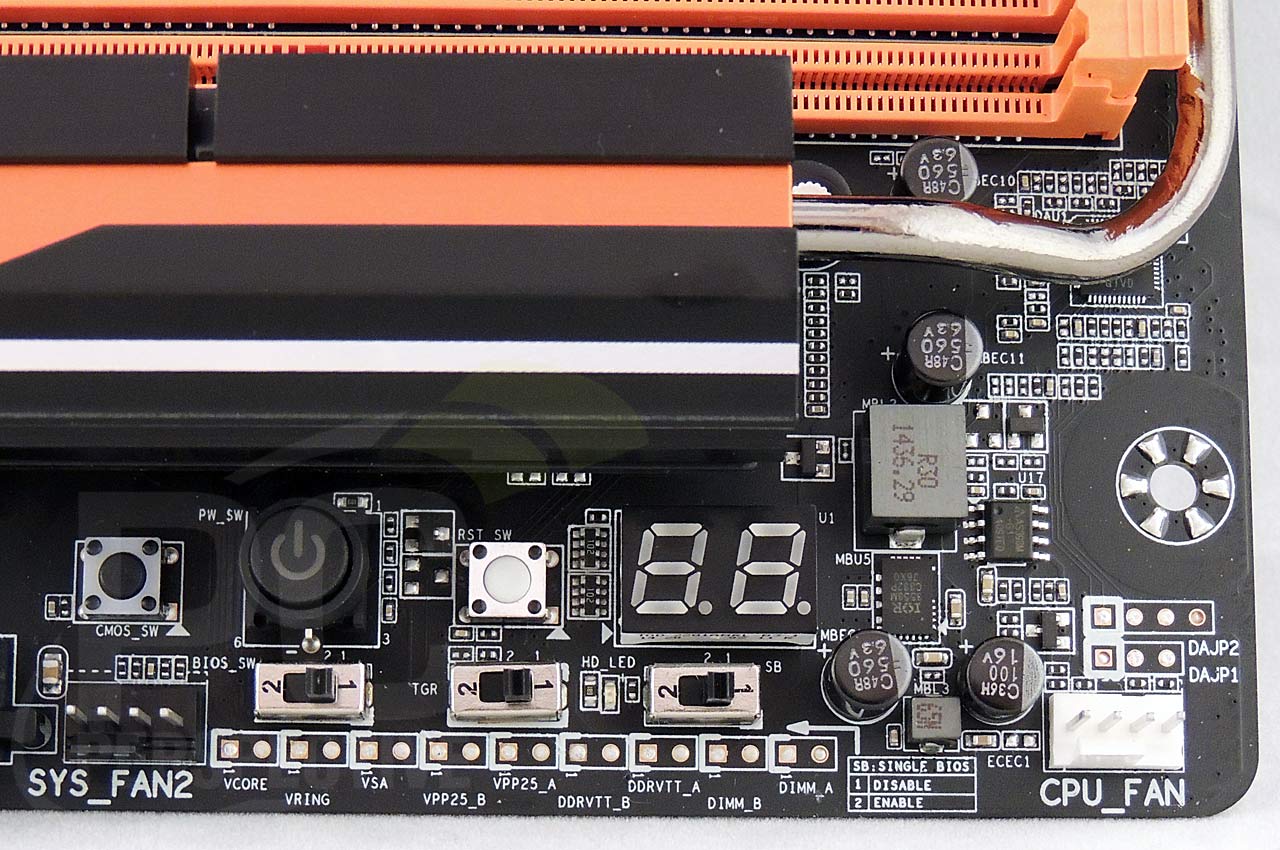 To the lower right of the lower set of DIMM slots are the 2-digit diagnostic LED display, the power, reset, Direct to BIOS, and CMOS clear buttons, on-board voltage measurement points, the Dual BIOS switch (SB), the active BIOS switch (BIOS_SW), and a 4-pin CPU fan header. The diagnostic LED display can be used in conjunction with the table provided in the user manual to identify and troubleshoot board boot-related issues. The voltage measurement points allow for direct board voltage measurement using a volt meter. The active BIOS switch is used to switch between the primary and backup BIOS. With the switch set to the 1 position (default), the main BIOS is active. In the 2 position, the backup BIOS is activated. The Dual BIOS Switch is set to enabled (the 1 position) by default. Dual BIOS is disabled with the switch in the 2 position. The OC Trigger switch forces the board into safe mode when set to the 2 position (right) with BIOS or application regulated settings enforced in default mode (left). In safe mode, the board reverts to the lowest processor ratio available (actual value depends on the CPU in use) and base clock settings, regardless of the active BIOS settings. 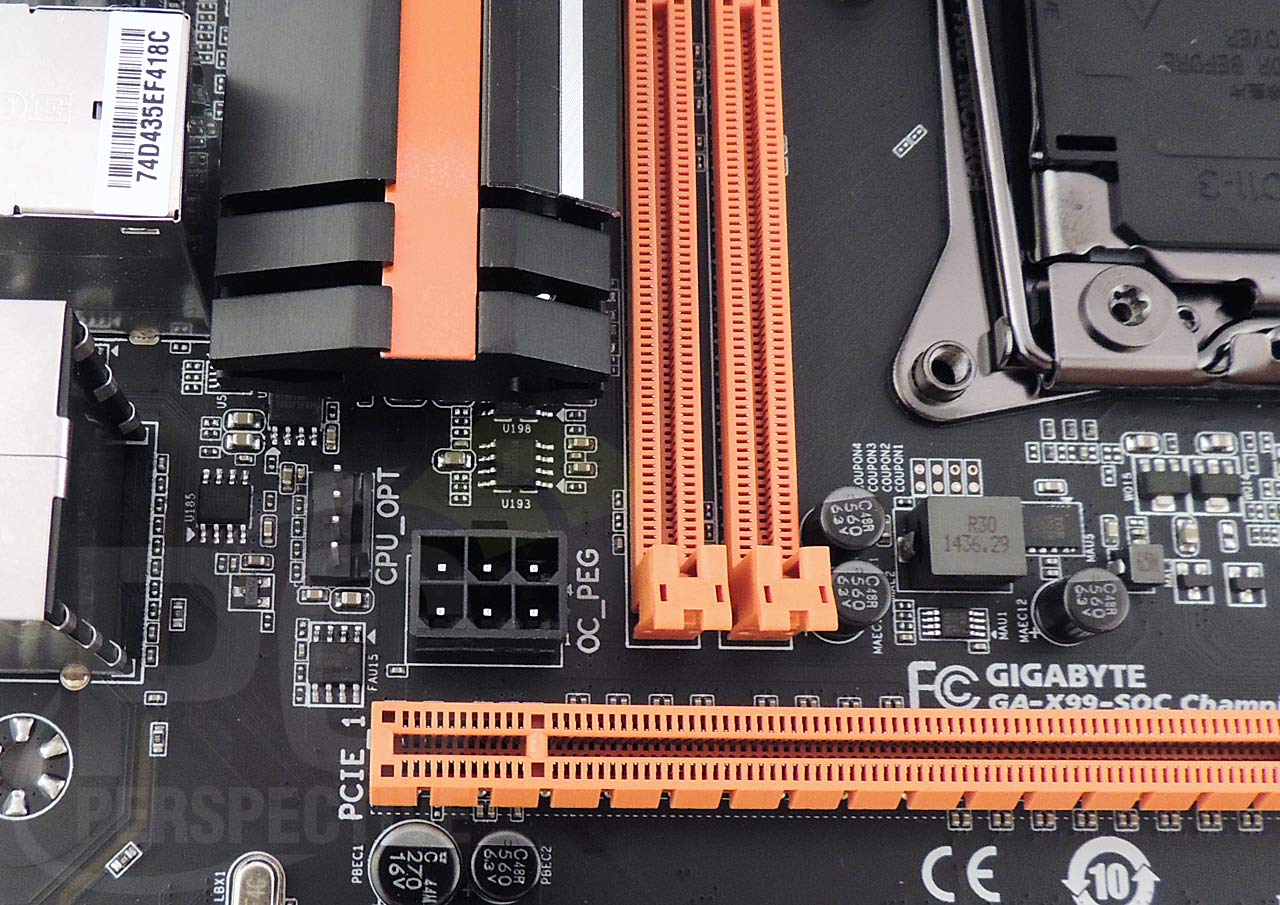 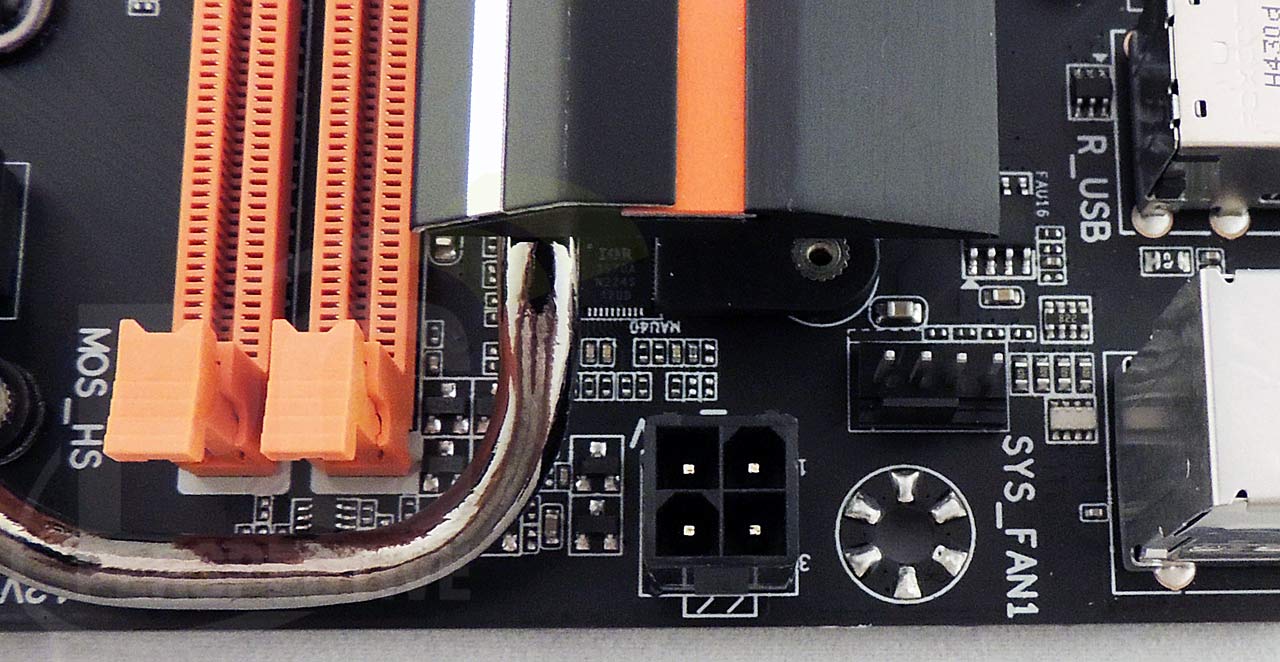 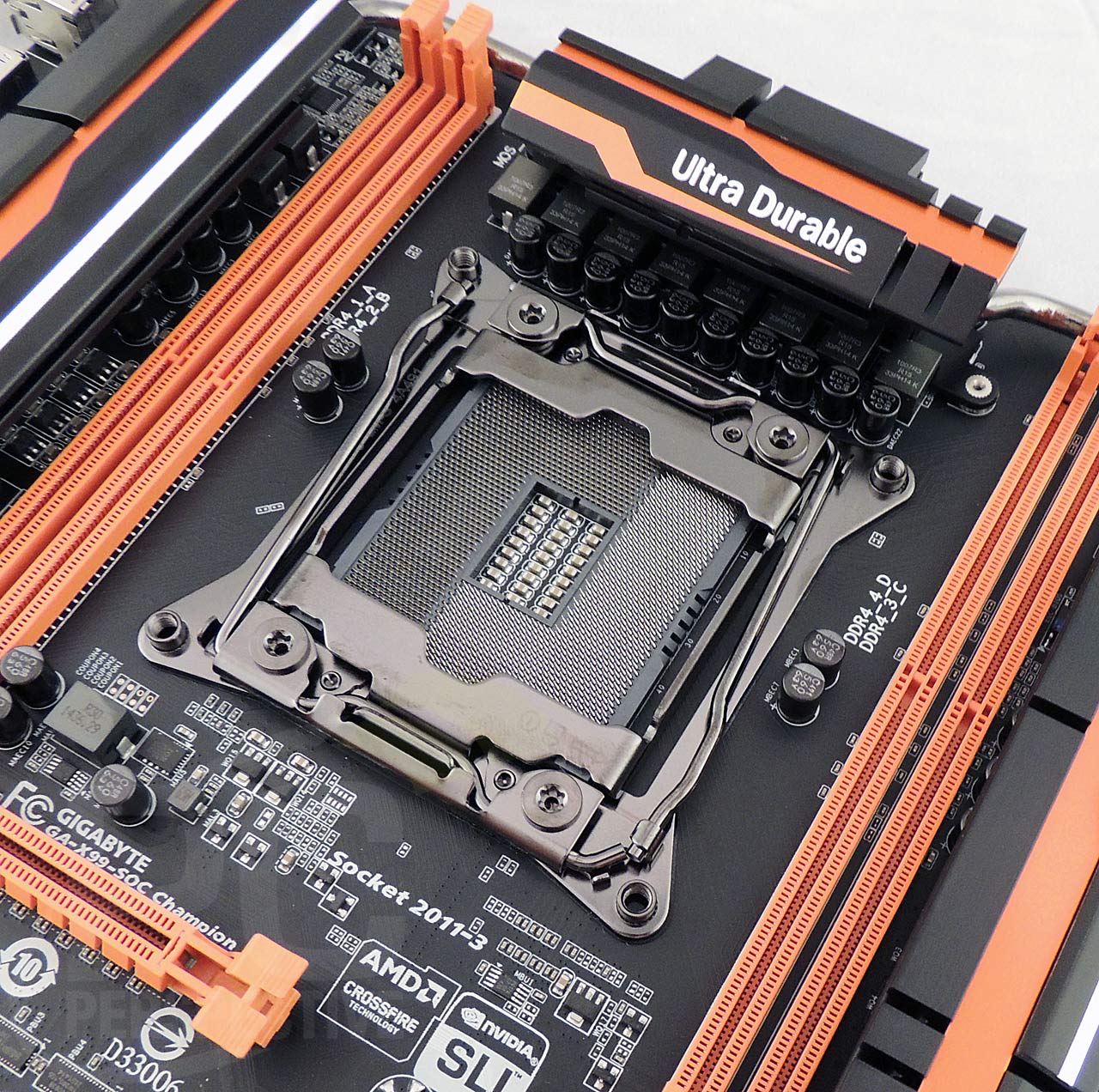 The CPU socket area is clear of obstructions. Even with the DIMM slots closer in proximity to the CPU socket than normal, we found no issues with using air or water coolers with the board. Notice how GIGABYTE connected all the board coolers via heat pipes unobtrusively routed, to better flow along the board's natural lines and hide them in plain sight. 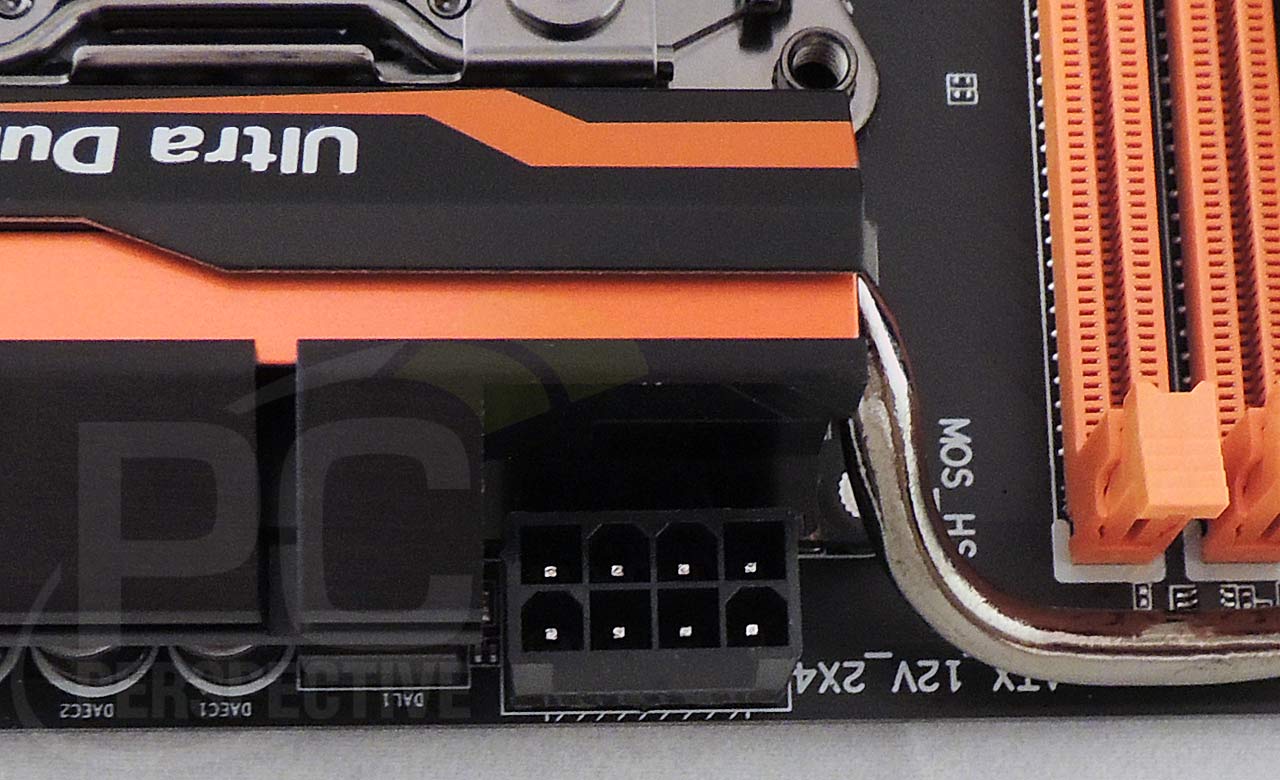