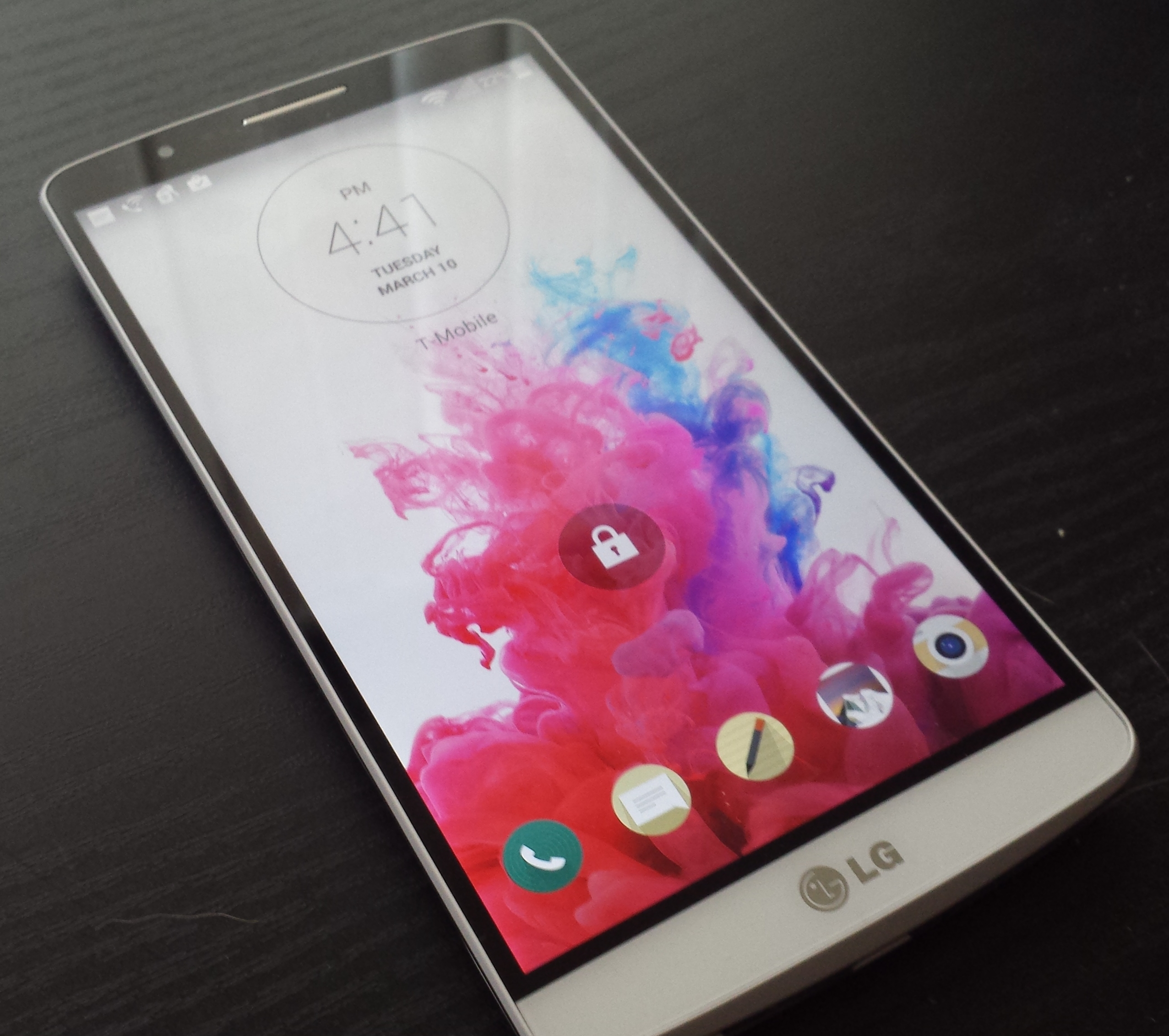 Find the LG G3 on Amazon!

Last week I stopped by the T-Mobile store in the mall, handed over two old phones, and ported over two lines from Verizon. I walked out with a cheaper contract with unlimited data (versus 4GB on Verizon) and a shiny new (to me, it's been out for awhile) LG G3. Which brings me to this post.

First off, the LG G3 is huge. This is the smallest tablet largest smartphone I have ever owned. Measuring 146.3 x 74.6 x 8.9 mm, the 149g smartphone is slightly smaller than the Apple iPhone 6 Plus and a bit chunkier at its thickest point. It is however easier to hold and operate (especially one handed) than the iDevice. The  is dominated by a large 5.5-inch Quad HD IPS display (2560 x 1440 resolution) and features round edges and a curved back. I chose the white version, but it also comes in black, blue, gold, red, and purple (the international versions). Except for the top bezel that holds the webcam, light sensor, and speaker, and that bit of empty space below the display with the LG logo, the G3 has super thin bezels. In fact, the phone is not much larger than the display (certainly width wise).

The LG G3's display looks amazing with sharp text and extremely detailed videos (the included 4k content is great). It is highly reflective and I had to crank the brightness all the way up to be able to read it under direct sunlight (my S4 was similar in this respect). In other lighting situations, it worked really well. 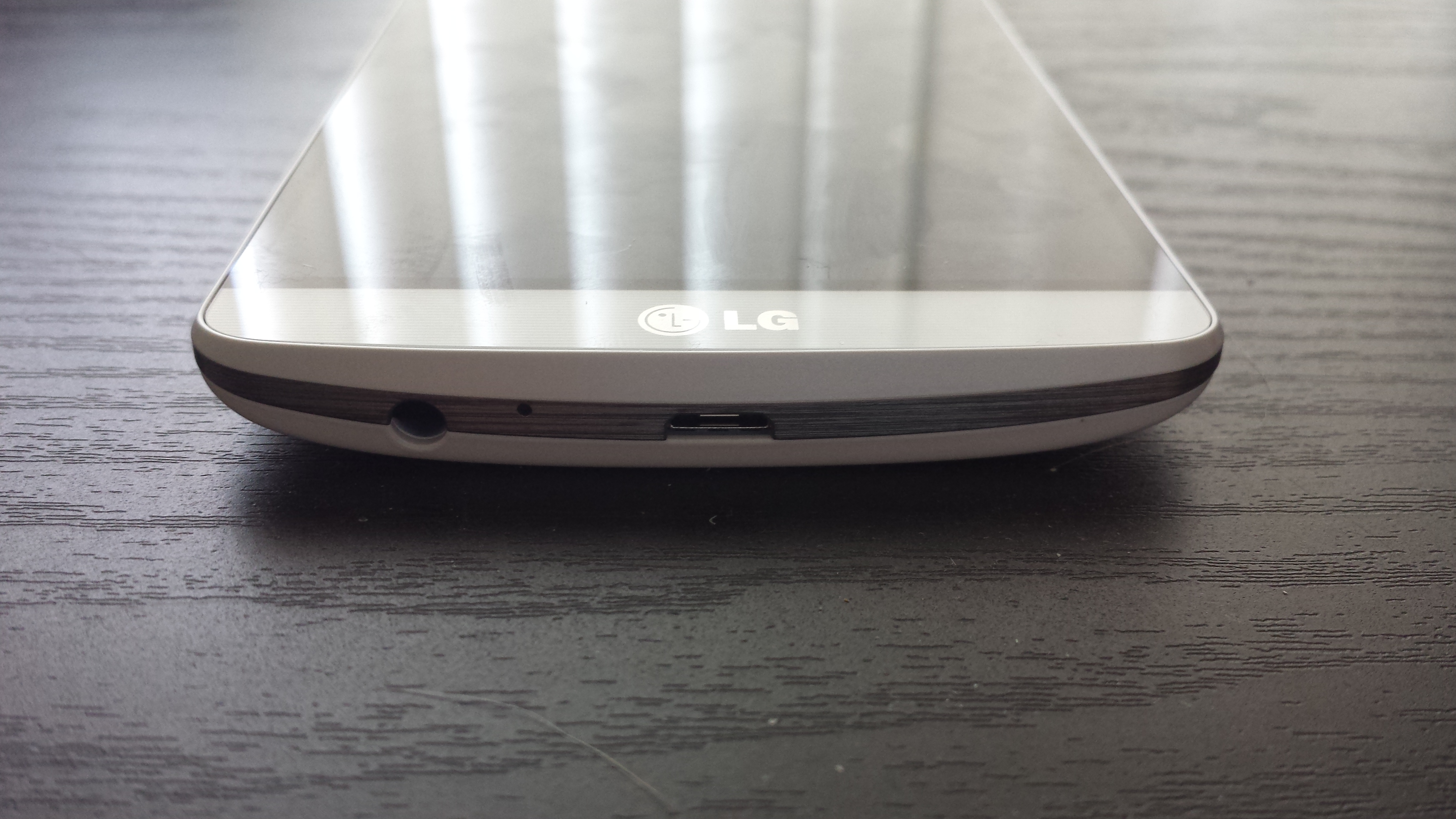 An infrared transmitter, microphone, micro USB port, and 3.5mm audio jack are placed along the top and bottom edges of the phone. Like its predecessor (the G2), LG has placed the power and volume buttons on the back of the device rather than the sides (Update: I am generally liking this setup now). The recessed buttons sit beneath the camera lens and are easier to find and use than I expected them to be. Now that I am getting used to them, I think LG is onto something (good) with this button placement. There is also a 1-watt speaker in the lower left corner of the back cover for media playback and speakerphone calls. For a smartphone speaker it can get fairly loud and does what it is supposed to. It is not spectacular but it is also not bad. I mostly use headphones but it's nice to know that I have a decent speaker should I want to share my music. 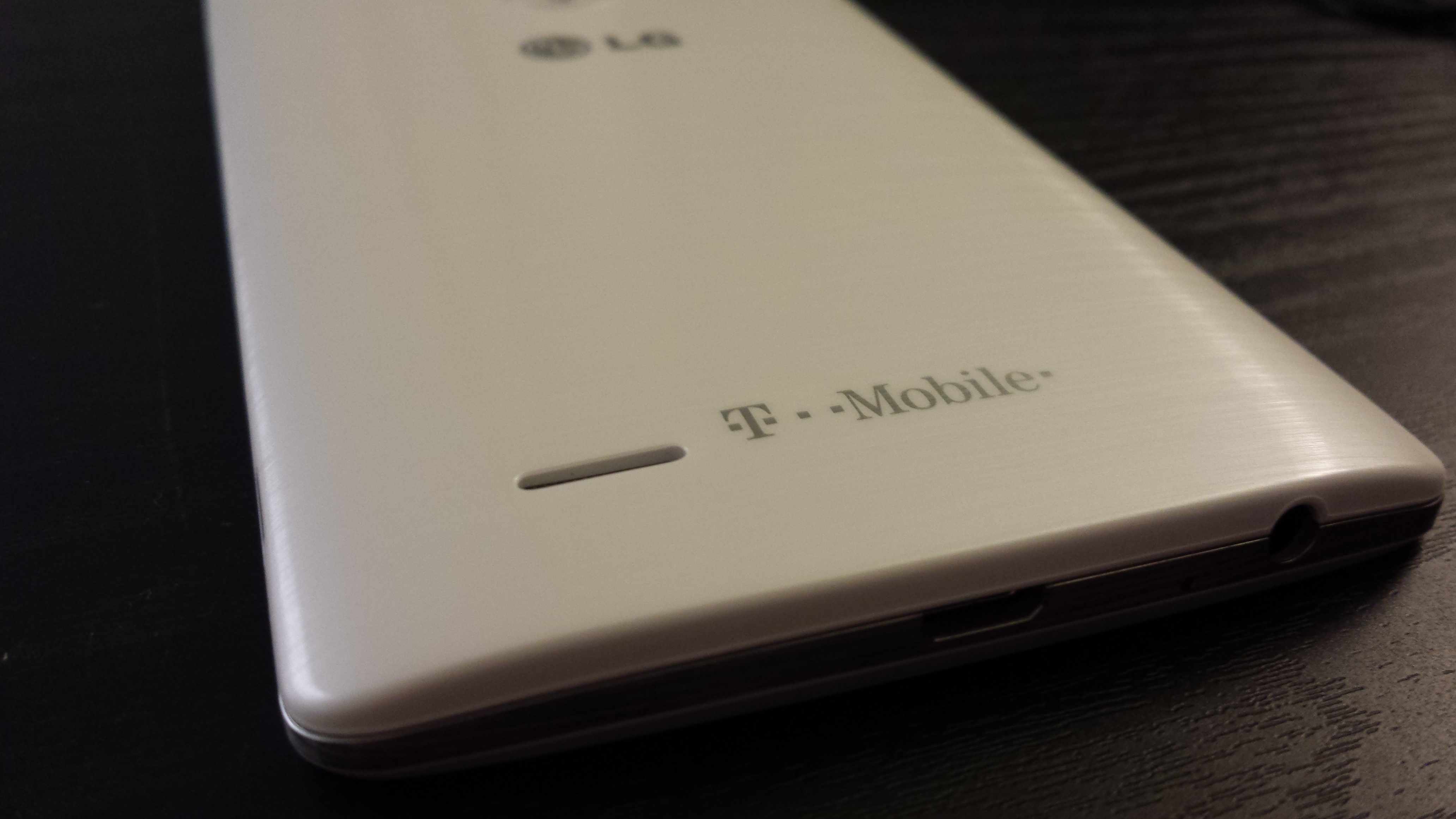 The curved back cover makes it easy to hold in one hand (even if I can't hit all the on-screen buttons without a longer thumb heh) and I feel like it will be dropped less frequently than my previous phone (the Galaxy S4) as a result of the form factor. One big change with the G3, for me, is the lack of buttons below the display (capacitive or physical), but I am slowly getting used to the on-screen navigation on Android (especially once I figured out I could long press the recent apps button to regain the menu button I miss from my S4). 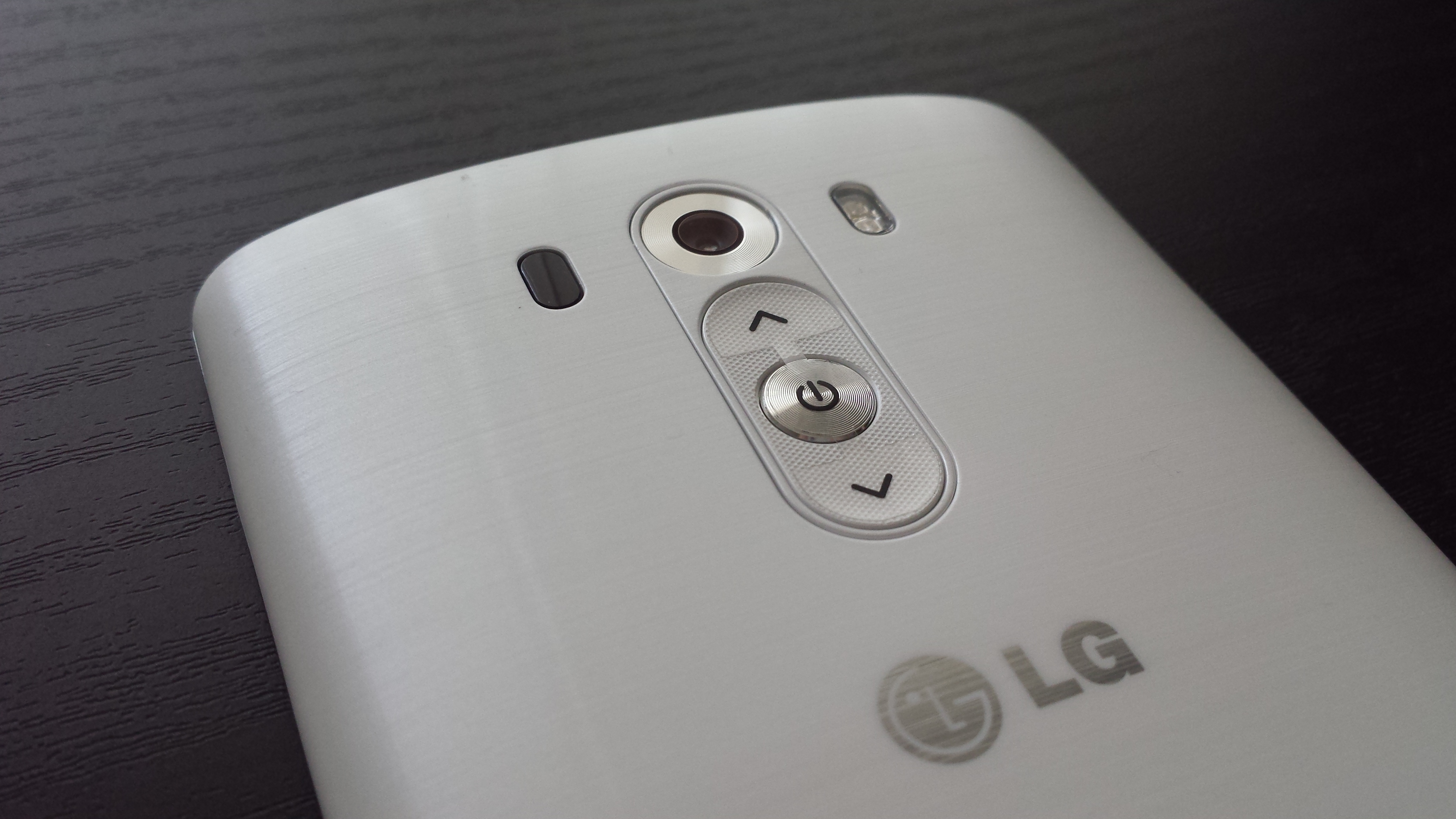 Aside from the display, the G3 features a 2.1MP front facing camera and a 13MP rear camera. The rear camera is where things get interesting because it is paired with a dual LED flash, laser focus, and optical image stabilization (OIS) technology. Outdoor shots were excellent and indoor shots with enough lighting were great. In low light situations, the camera left something to be desired, and I was kind of disappointed. Using the flash does help and it is quite bright. However, I tend to not like using the flash unless I have to as photos always look less natural. For as small as the camera is though (the lens and sensor are tiny), it does pretty well. In good lighting conditions it is trounces my S4 but the (upgrade) is much less noticeable with less light (the G3 does have a much brighter flash).

The laser focus is a really cool feature that works as advertised. The camera focuses extremely quickly (even in low light) allowing me a much better chance to capture the moment. It also refocuses (tap to focus) quickly.

The camera software is not as full featured as other smartphones I have used, however. I was put off by this at first as someone that likes to tinker with these things but at the end of the day it does what it is supposed to and it does it well (which is to take photos). You can swipe to switch between the front and back cameras, choose from a couple preset modes, and adjust basic settings like resolution, voice controls, HDR, and shutter timer. For "selfie" fans, LG has a feature where you can make a fist in the air and it will start a countdown timer. While I have not tried the voice commands, I did try the gesture and it does work well. 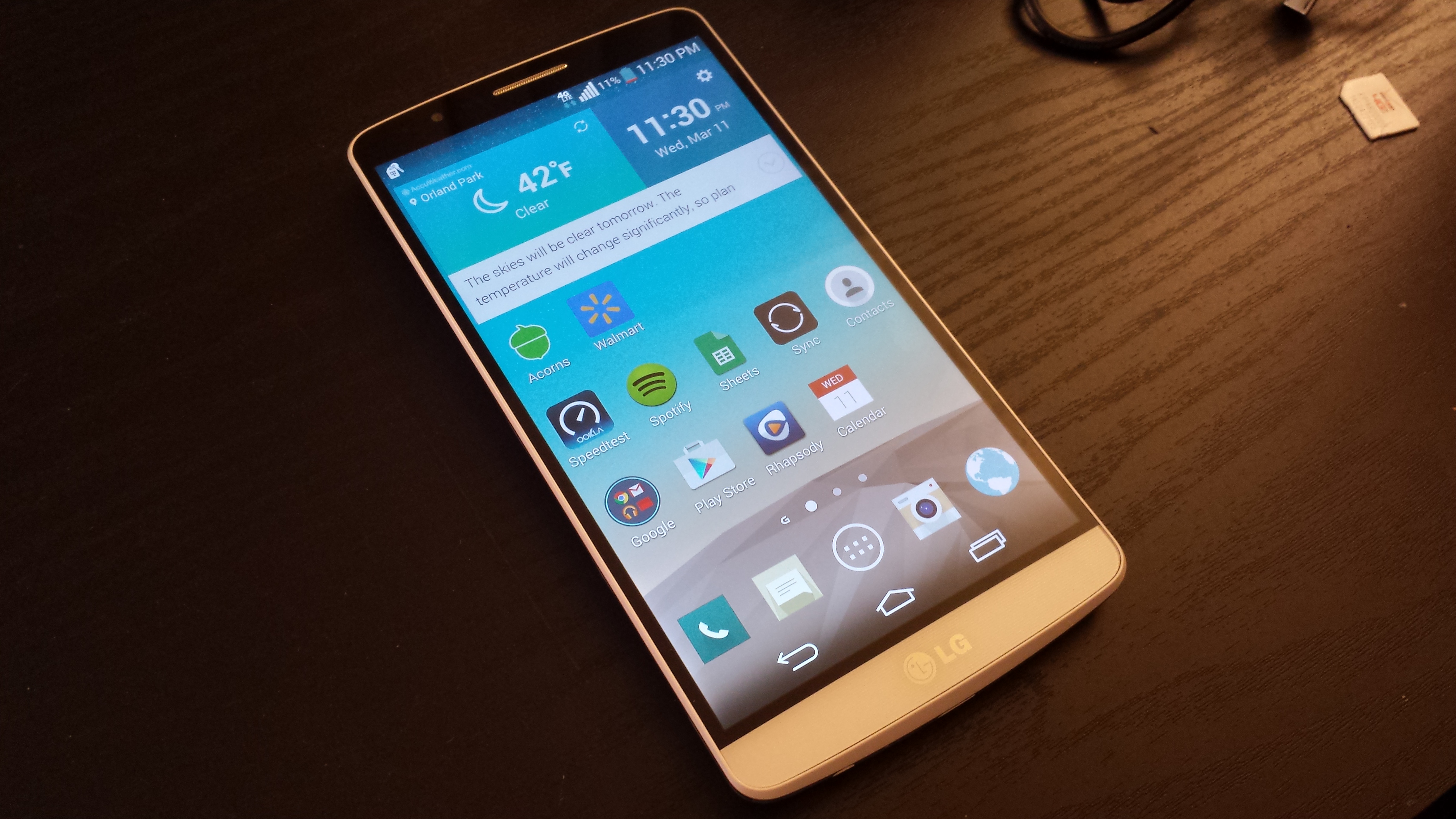 Anyways, before this turns into a full review (heh), it might help to know what's under the hood as well. The G3 is powered by a Qualcomm Snapdragon 801 SoC which pairs four Krait 400 CPU cores clocked at 2.5 GHz with an Adreno 330 GPU. The phone comes with either 16GB internal storage and 2GB of RAM or 32GB internal storage and 3GB RAM. I chose the higher end model to get the extra RAM just in case as I plan to have this phone for a long time. It supports 4G LTE, 802.11ac Wi-Fi, Bluetooth 4.0, GPS, and NFC (Near Field Communication). You can also use it with Qi-enabled wireless chargers if you purchase a supporting back cover. The G3 is running Android 4.4.2 on T-Mobile but it does support Android 5.0 and some carriers have already pushed out updates.

The G3 comes with a 3,000 mAh battery and a 1.8 amp USB charger. It does take awhile to charge this thing (my 2.1 amp Samsung charger is a bit faster), but once it is fully charged it will easily last all day including listening to streaming music and audiobooks, text messaging, and web browsing. (Update: I don't have specific battery life numbers yet, but I generally only need to charge it once a day so long as I keep the display brightness around half. If I crank the brightness all the way up I can almost feel the battery draining by the second heh.)

Like Samsung, LG has a battery saving feature that will kick in at 30% to conserve battery but turning down the screen brightness, turning off radios that are not active, and a few other configurable battery drainers (haptic feedback, notification lights, and account syncing). I do like their battery settings page as it will estimate the time needed to charge and the time remaining as it discharges along with a nice graph of battery percentages over time. Other Android phones have something similar but LG has fleshed it out a bit more. 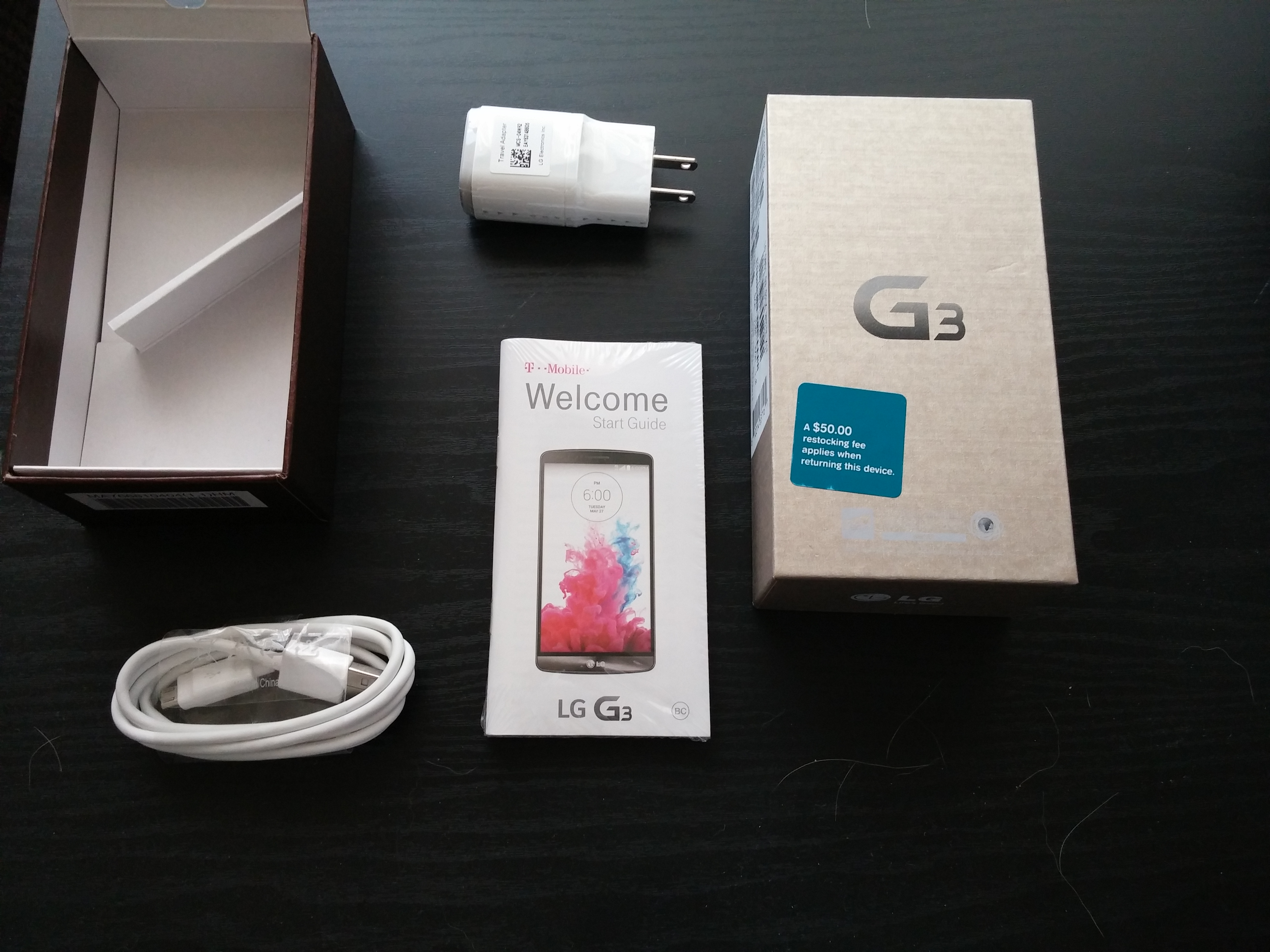 LG packs light with only the smartphone, USB cable, USB charger, and a quck start guide included in the box. No headphones or extra accessories here.

In all, so far so good with the LG G3. I am very happy with my purchase and would recommend checking it out if you are in the market for a large display-packing smartphone that's not an iPhone 6 Plus or Galaxy Note 4 (which Ryan recently reviewed). If you want the latest and greatest Android phone and can afford the premium (about $300 more in my case when I compared them), grab the Note 4. On the other hand, if you are looking for a Android smartphone with a large display, good battery life, and decent hardware specifications, the LG G3 is a respectible choice that delivers and doesn't break the bank.

Have you tried out the G3? What do you think about the trend for larger and thinner smartphones? This is hardly an exhaustive review and there are things I didn't get into here. After all, I'm still checking out my G3. With that said, from first impressions and about a week of usage it seems like a really solid device. I've since fitted it with a screen protector and a case so as to not break it – especially that hi-res display!

Update: Some photos that I've taken with the G3's camera can be found here. They aren't particularly interesting photos, but I tried to get some in various lighting conditions. Overall, I like the camera, but I stick by my initial impressions. 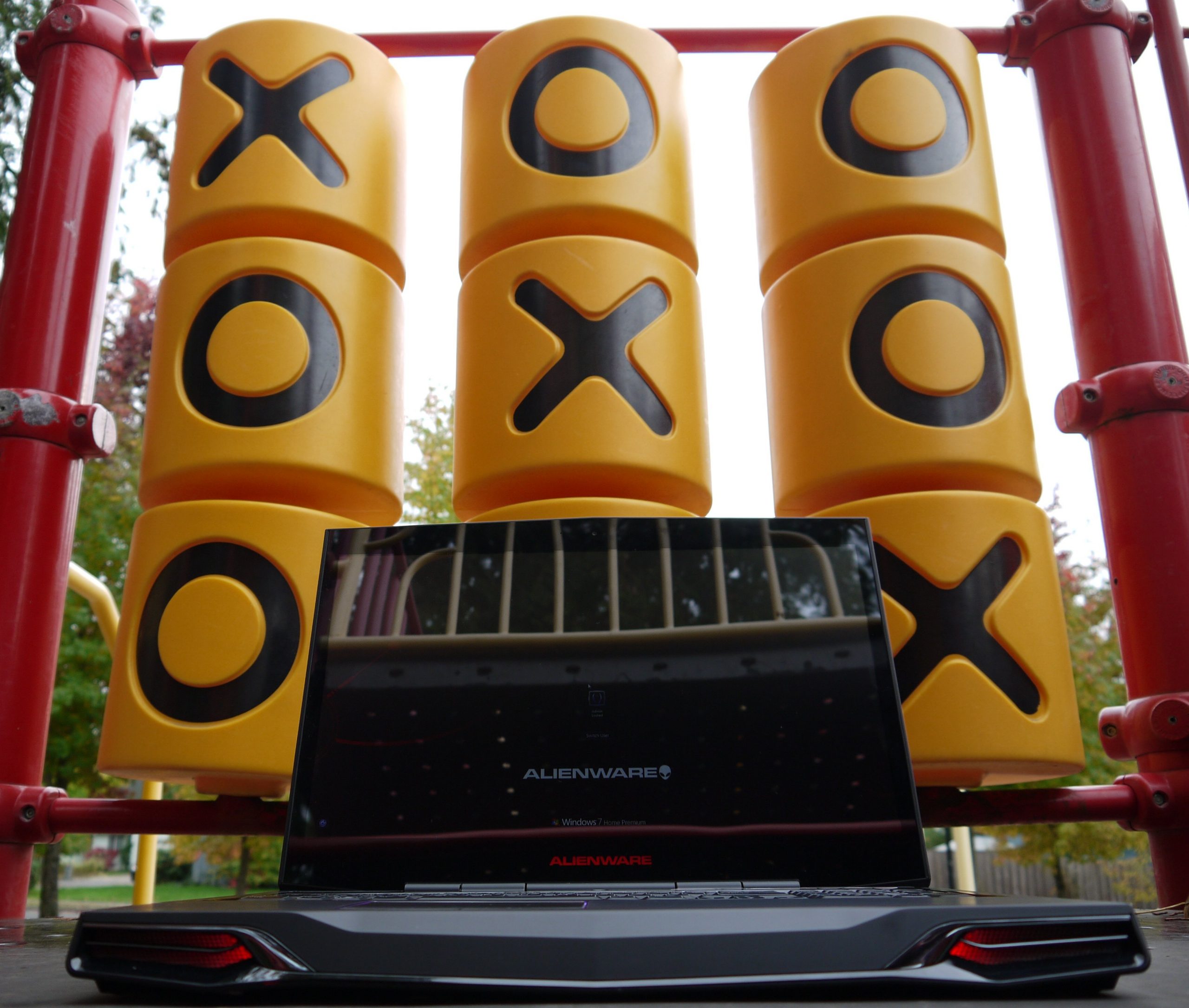