Motorola has released an updated version of their low-cost Moto E smartphone for 2015, adding faster hardware and LTE support to an unlocked device with an unsubsidized retail of just $149. In this review we'll examine this new phone to find out if there are any significant limitations given its bargain price. 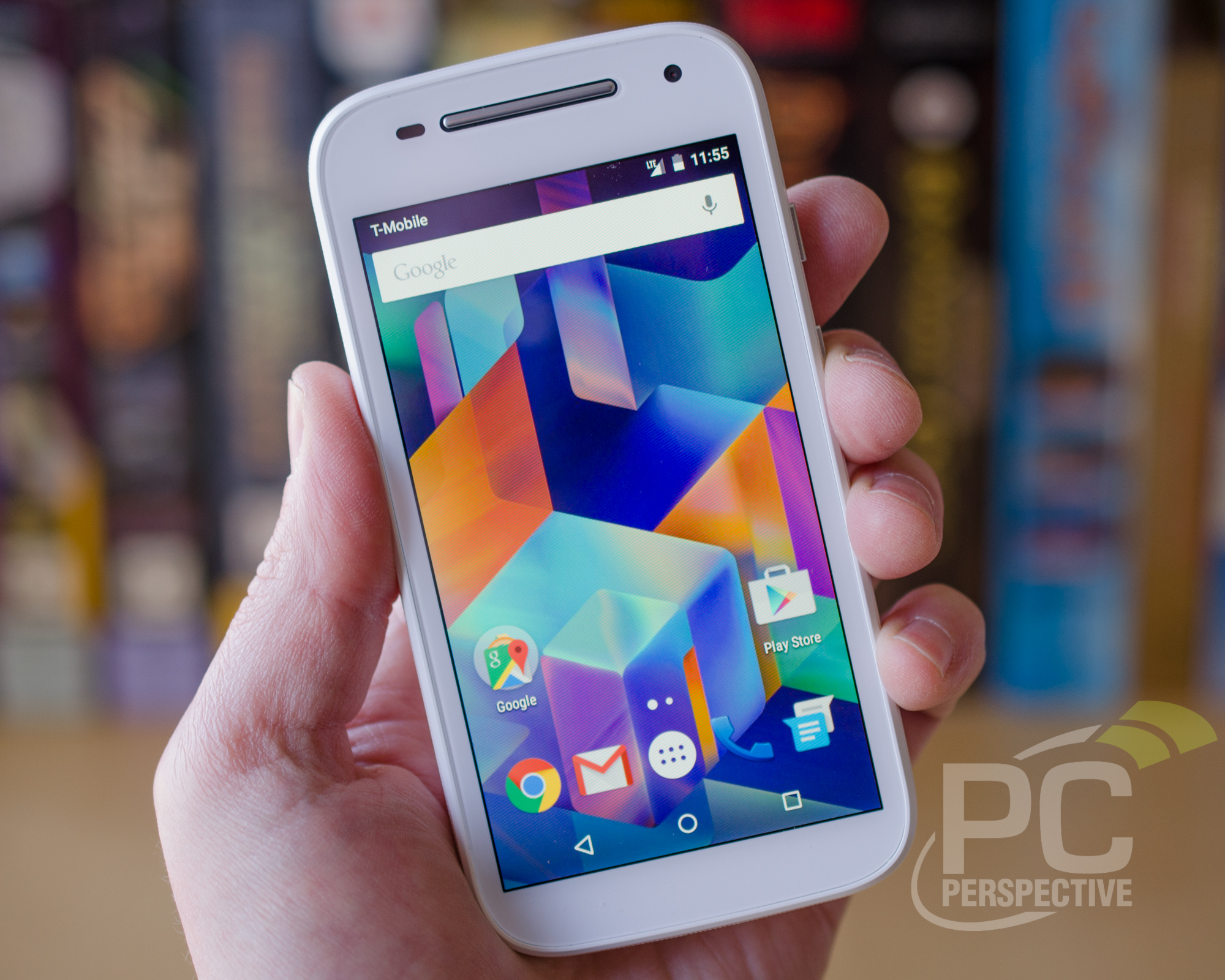 There has been a trend toward affordability with smartphone pricing that accelerated in 2014 and has continued its pace to start this year. Of course expensive flagships still exist at their $500+ unsubsidized retail prices, but is the advantage of such a device worth the price premium? In most cases a customer in a retail space would be naturally drawn to the more expensive phones on display with their large, sharp screens and thin designs that just look better by comparison. To get the latest and greatest the longstanding $500 – $700 unsubsidized cost of popular smartphones have made 2-year contract pricing a part of life for many, with contract offers and programs allowing users to lease or finance phones positioned as attractive alternatives to the high initial price. And while these high-end options can certainly reward the additional cost, there are rapidly diminishing returns on investment once we venture past the $200 mark with a mobile device. So it’s this bottom $200 of the full-price phone market which is so interesting not just to myself, but to the future of smartphones as they become the commodity devices that the so-called “feature phones” once were.

One of the companies at the forefront of a lower-cost approach to smartphones is Motorola, now independent from Google after Motorola Mobility was sold to Lenovo in October of 2014. A year before the sale Motorola had released a low-cost smartphone called the Moto G, an interesting product which ran stock Android for a fraction of the cost of a Google Play edition or even Nexus device; though it was underpowered with decidedly low-end specs. After a redesign in 2014, however, the 2nd edition Moto G became a much more compelling option, offering a unique combination of low price, respectable hardware, a stock Android experience, and Motorola’s now trademark design language, to a market drowning in bloated MSRPs. There was just one problem: while the 2014 Moto G had solid performance and had (quite importantly) moved larger 5-inch screen with a higher 720×1280 resolution IPS panel, there was still no LTE support. Selling without a contract for just $179 unlocked made the lack of LTE at least understandable, but as carrier technology has matured the prevalence of LTE has made it an essential part of future devices – especially in 2015. Admittedly 3G data speeds are fast enough for many people, but the structure of the modern mobile data plan  often leaves that extra speed on the table if one’s device doesn’t support LTE.

The overall experience with a smartphone is a culmination of every aspect of its hardware and software, and it’s what makes assessing and recommending mobile devices so difficult. While the design of the Moto E isn’t flashy, the 2015 version is elegant in its simplicity. It has a functional design that also ergonomic, making it easy to hold and use with one hand, particularly given its 4.5-inch size. The industrial design is reminiscent of the other phones in the current Moto family, as Motorola has adopted a design language that is consistent across their product line. This cohesiveness makes each model in the series similar to use, and has primarily differentiated them based on screen size and hardware specifications rather than outward appearance. The 2015 Moto E certainly seem a bit more polished compared to what we are often used to seeing in the entry level space, and if not for its thickness it could be easily mistaken for a more expensive device.

The Moto E has a fully plastic construction (save the Gorilla Glass screen), and in hand it's lightweight while still feeling solid. There is an immediate and tangible difference when comparing this phone to a more premium device side-by-side, as it isn’t made with the same materials or sleek dimensions as a flagship phone, but it is a respectable alternative. This 2015 Moto E does have enough of the DNA of the Moto X to give it some style, but the thickness of the phone if nothing else would make it pretty obvious to anyone that this isn’t the same device.

Now we'll check out the full specifications for this LTE version of the 2015 Moto E from Motorola (US GSM model XT1527):

Upon removing the Moto E from the no-frills packaging you'll be presented with the standard Android welcome screen, and (in addition to the phone) the box simply includes a wall charger and some basic documentation. 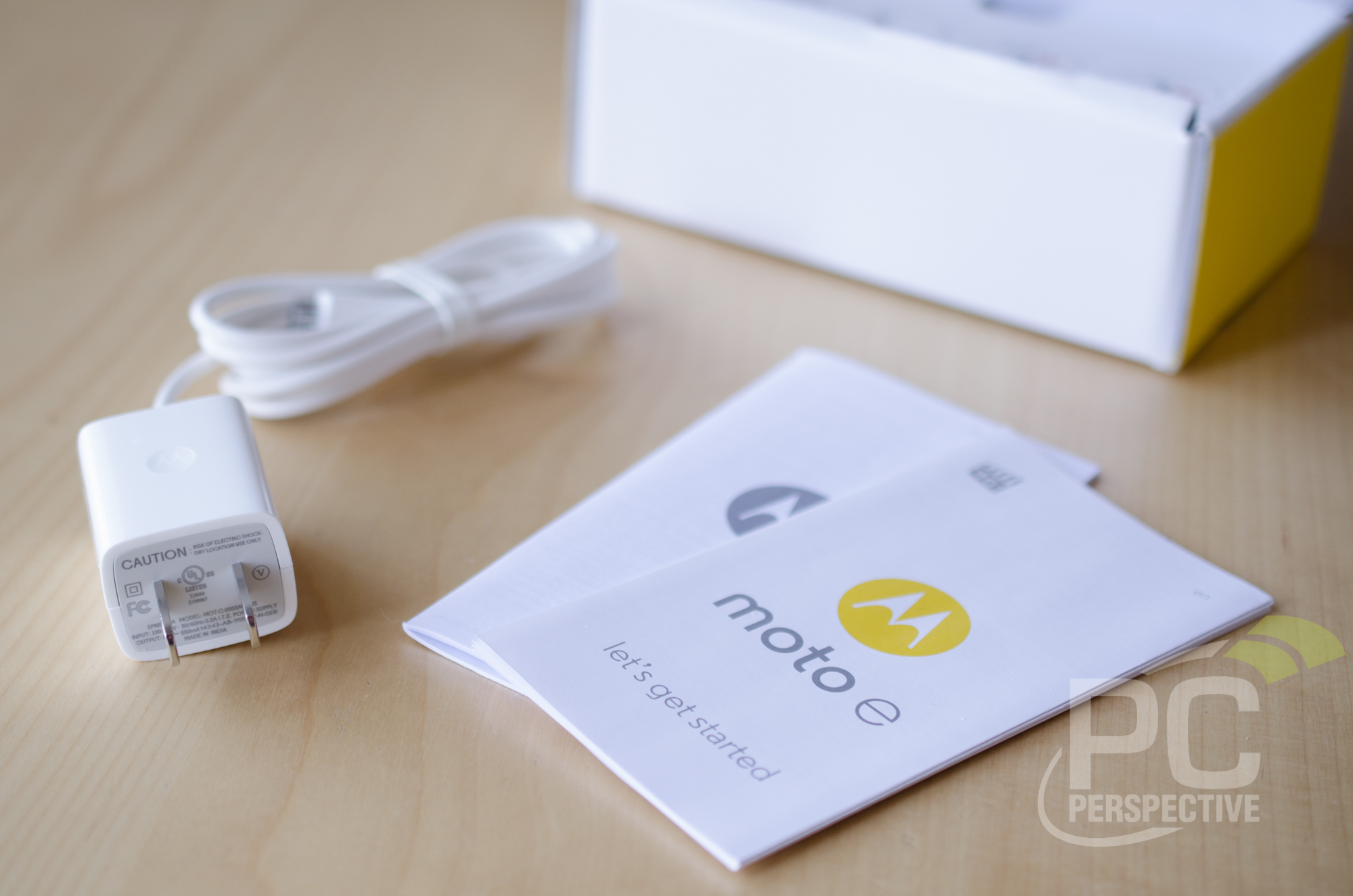 Next we'll take a closer look at the design and display of the 2015 Moto E.