It would be crazy to consider the MSI GS30 Shadow's combination of hardware without at least looking at the performance of the notebook alone. How does the GS30, with it's Core i7-4870HQ processor and Iris Pro graphics, compare to some of the other recently released Ultrabooks and thin-and-lights? 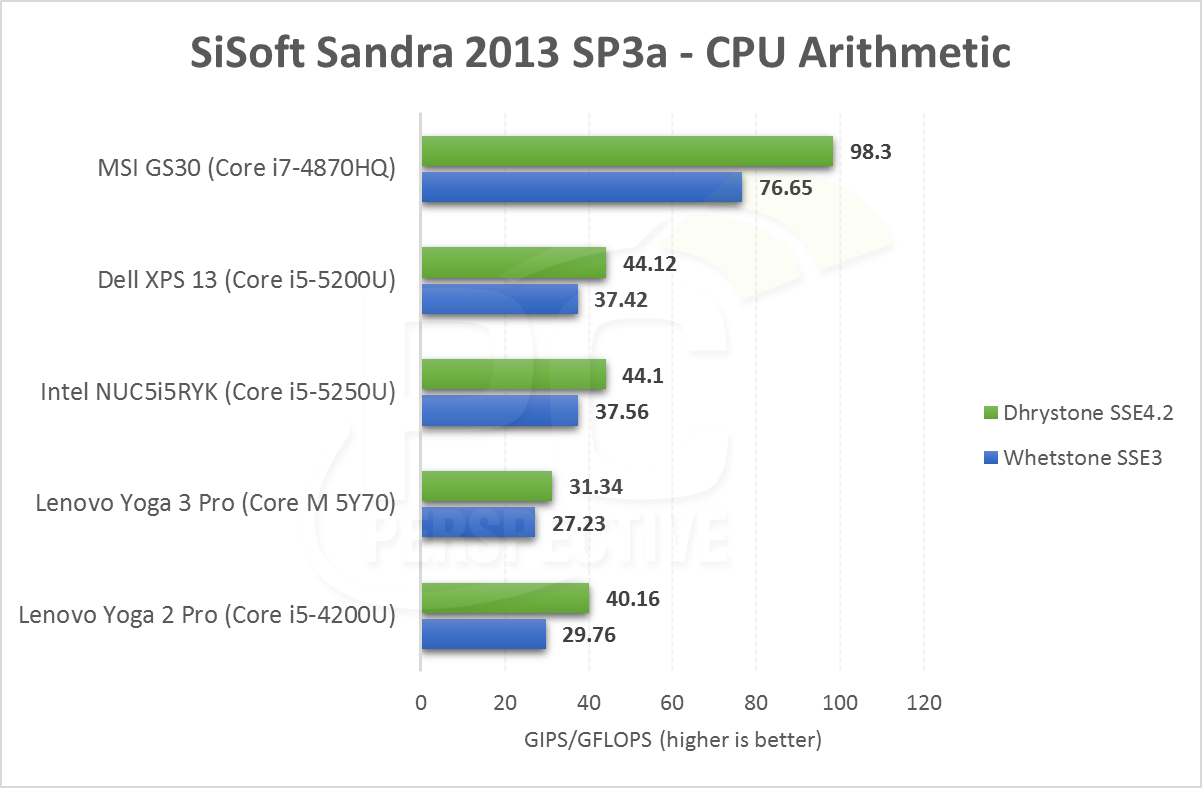 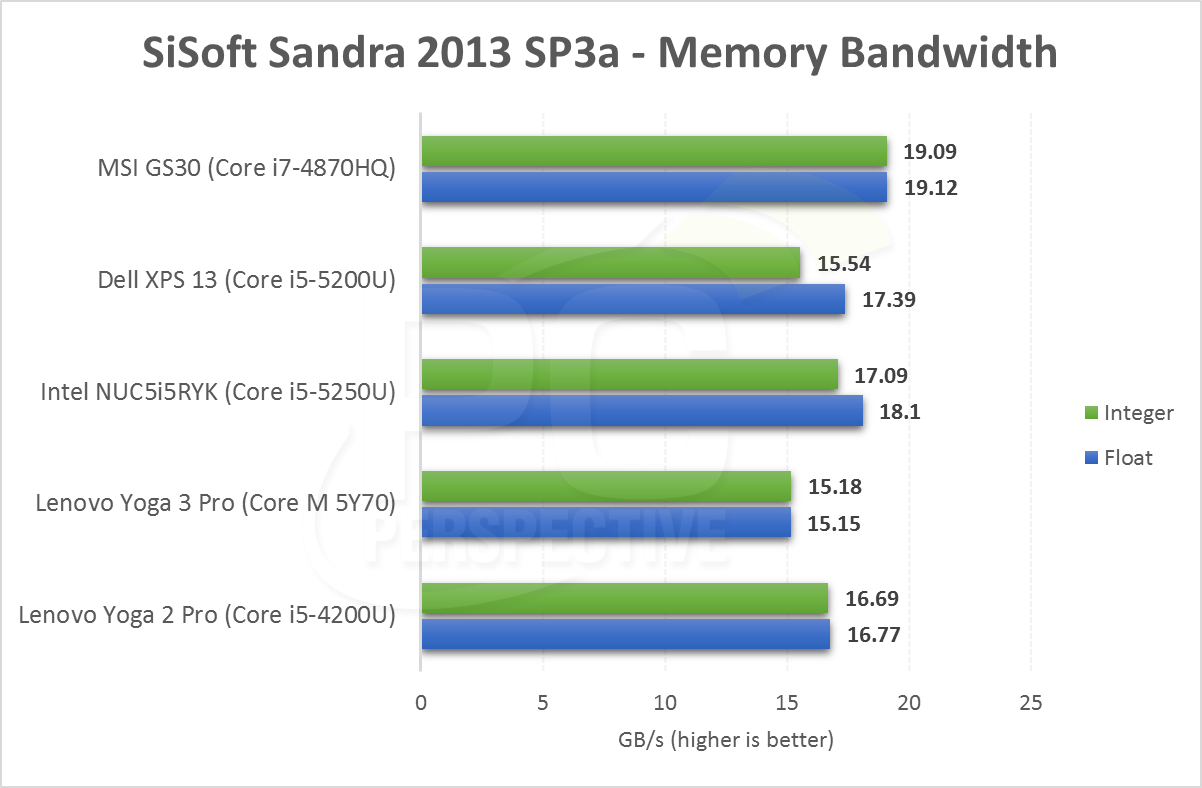 Well, clearly, the Core i7-4870HQ is a different kind of beast than the other processors found in the Dell XPS 13. Yes, the 4870HQ is a Haswell based processor, rather than Broadwell that is making the rounds today, but SiSoft Sandra loves the high clock speeds and the quad-core, HyperThreaded capability of this part. That combination results in a 2.2x increase on the integer score and 2.04x increase on the floating point processing score.

Memory performance is higher (~10%), but doesn't see the increase that you saw on the synthetic testing. 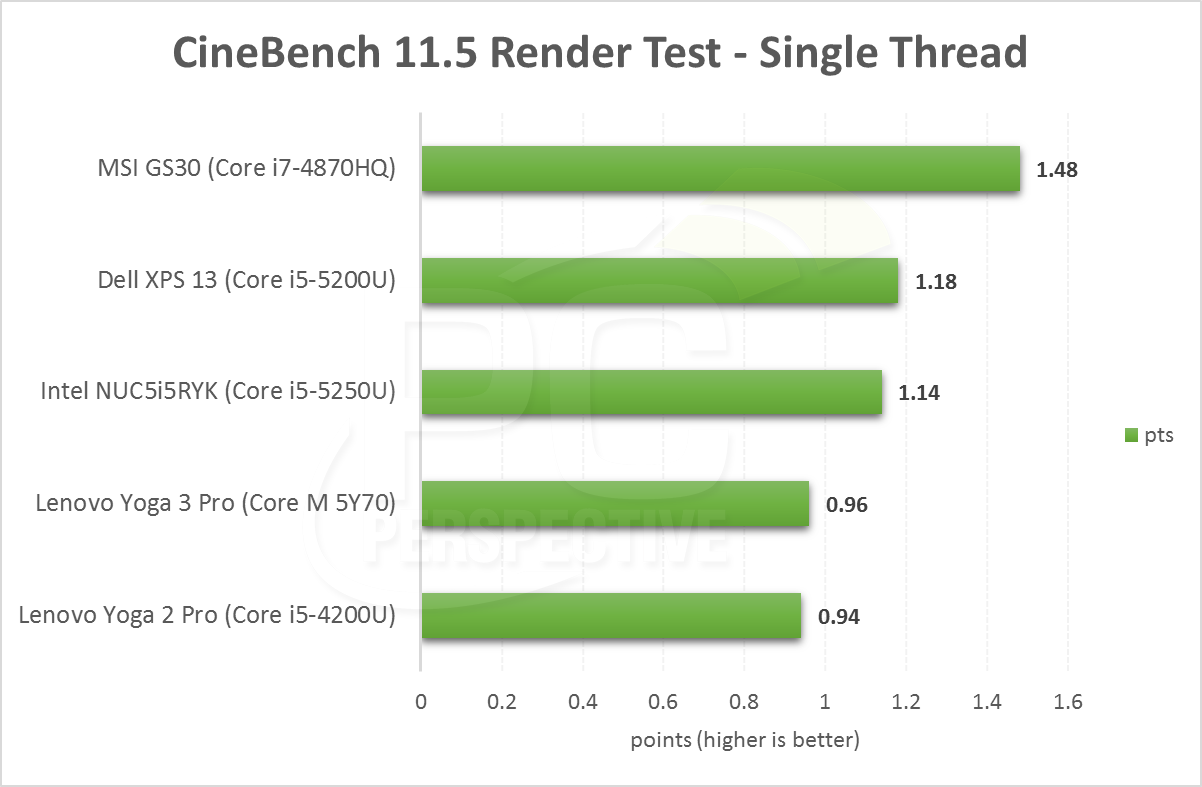 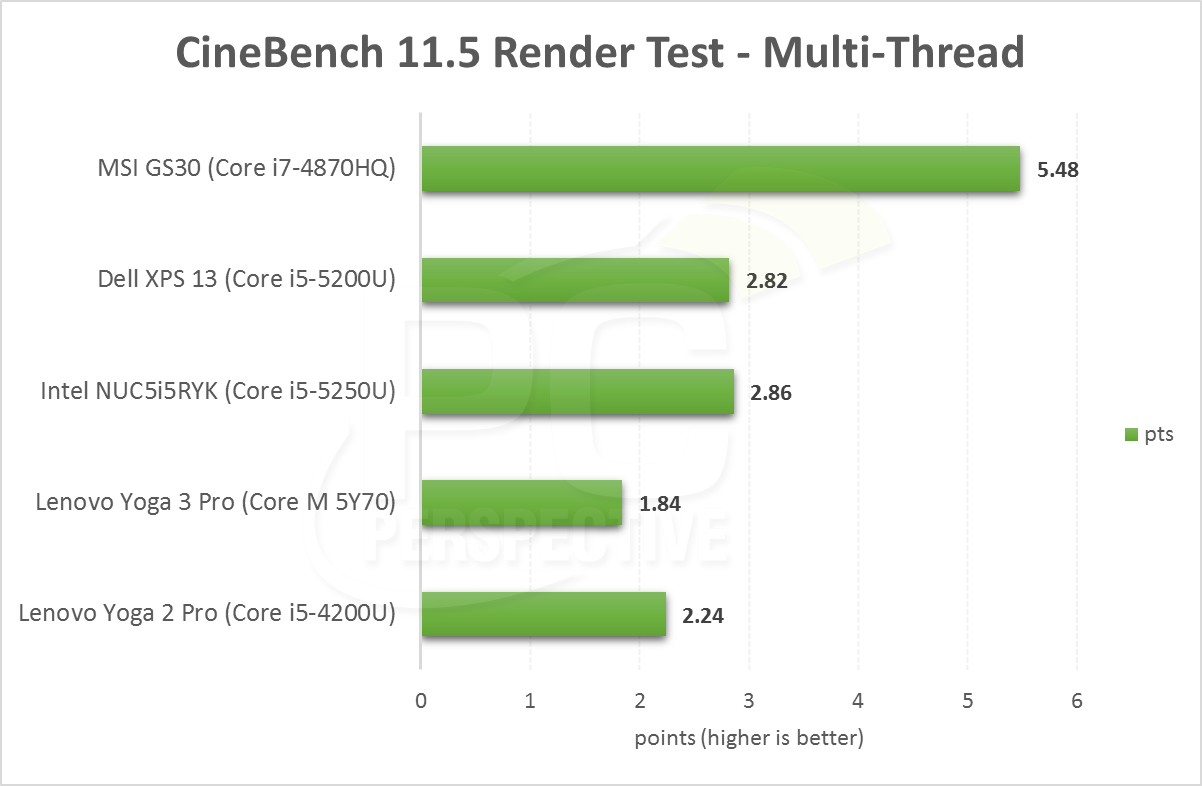 CineBench is another test we frequently use to measure raw CPU performance. In the single threaded result, the Core i7-4870HQ is already a solid 25% faster than the Core i5-5200U Broadwell CPU found in the Dell XPS 13. Under a multi-threaded workload, the CPU takes another steep jump, running 94% faster than the Core i5 Broadwell option. That makes sense when we compare the 4870HQ and its four cores to the 5200U and its two cores. 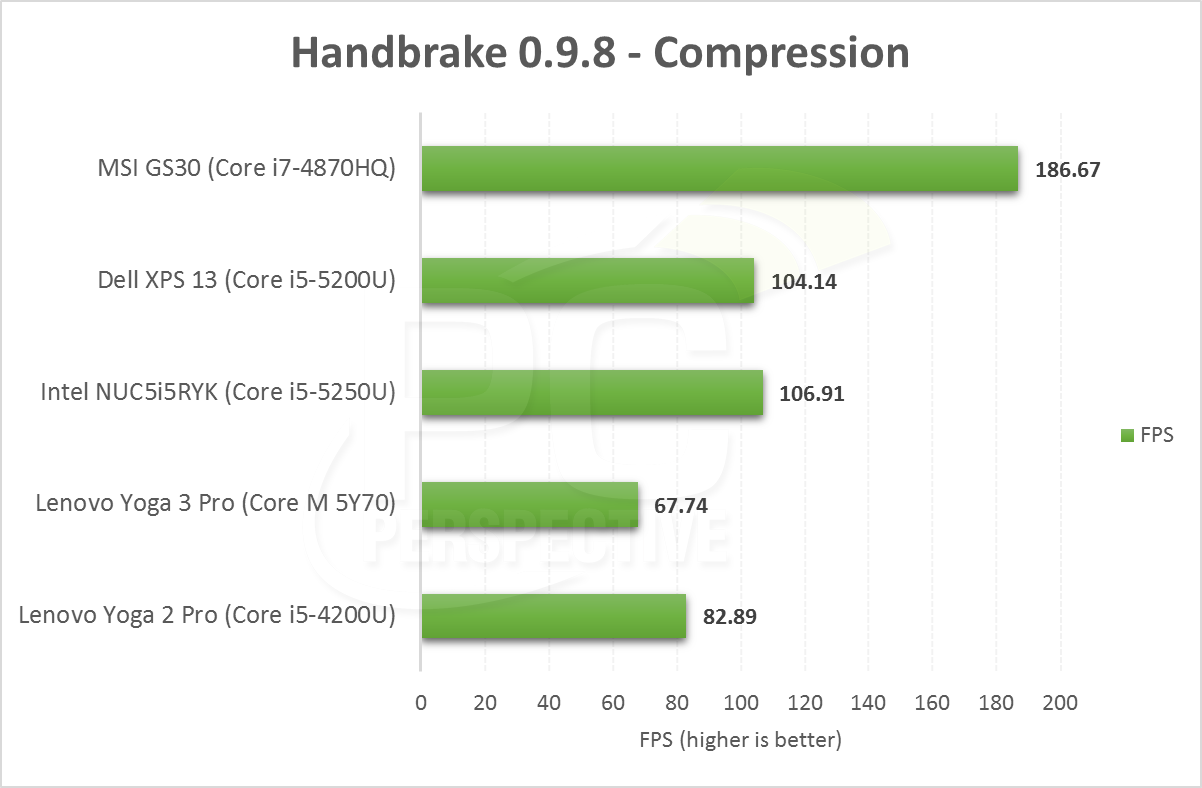 With a score of over 186 FPS, the Handbrake conversion process runs 74% faster on the MSI GS30 than on the Dell XPS 13. 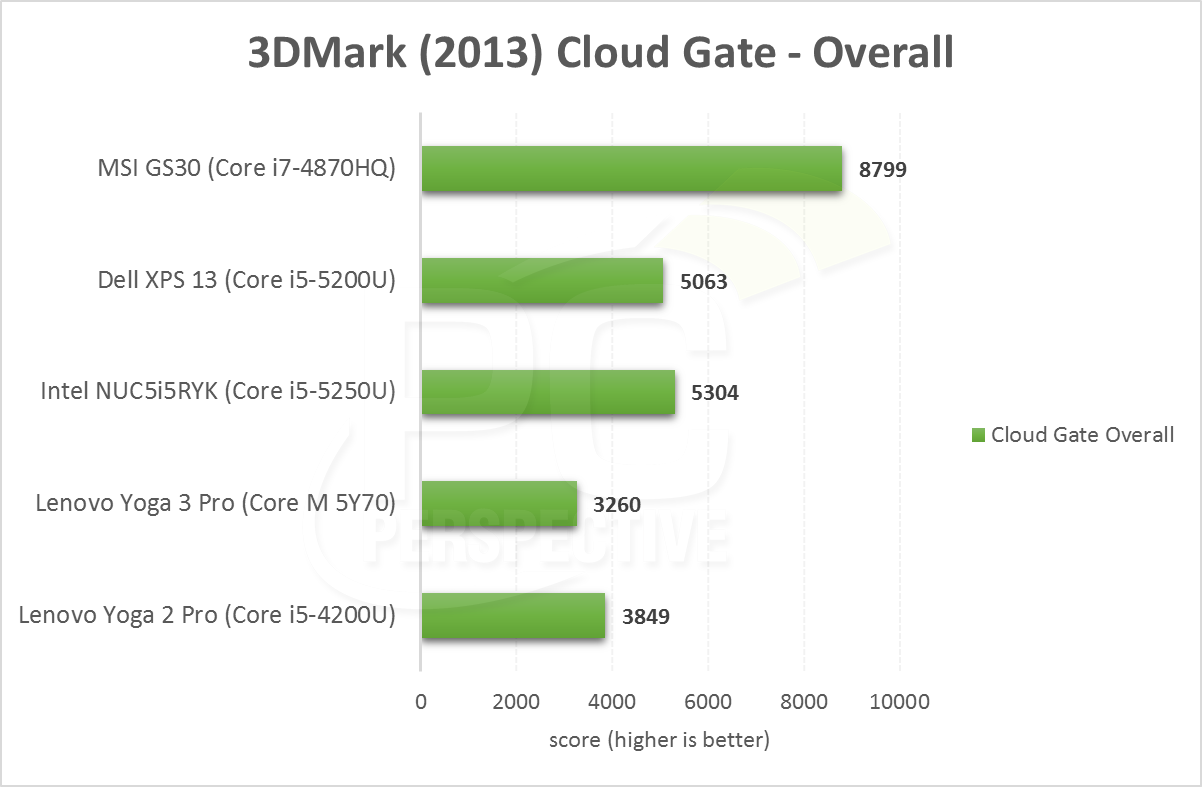 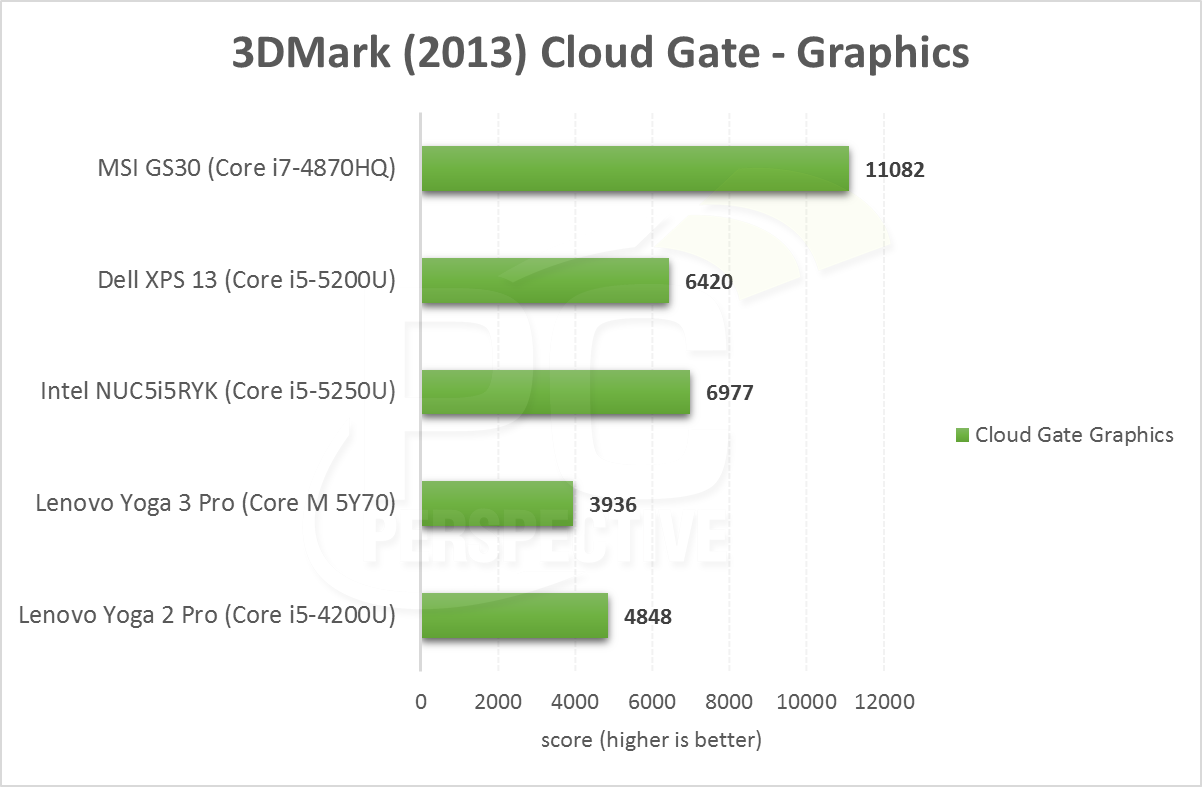 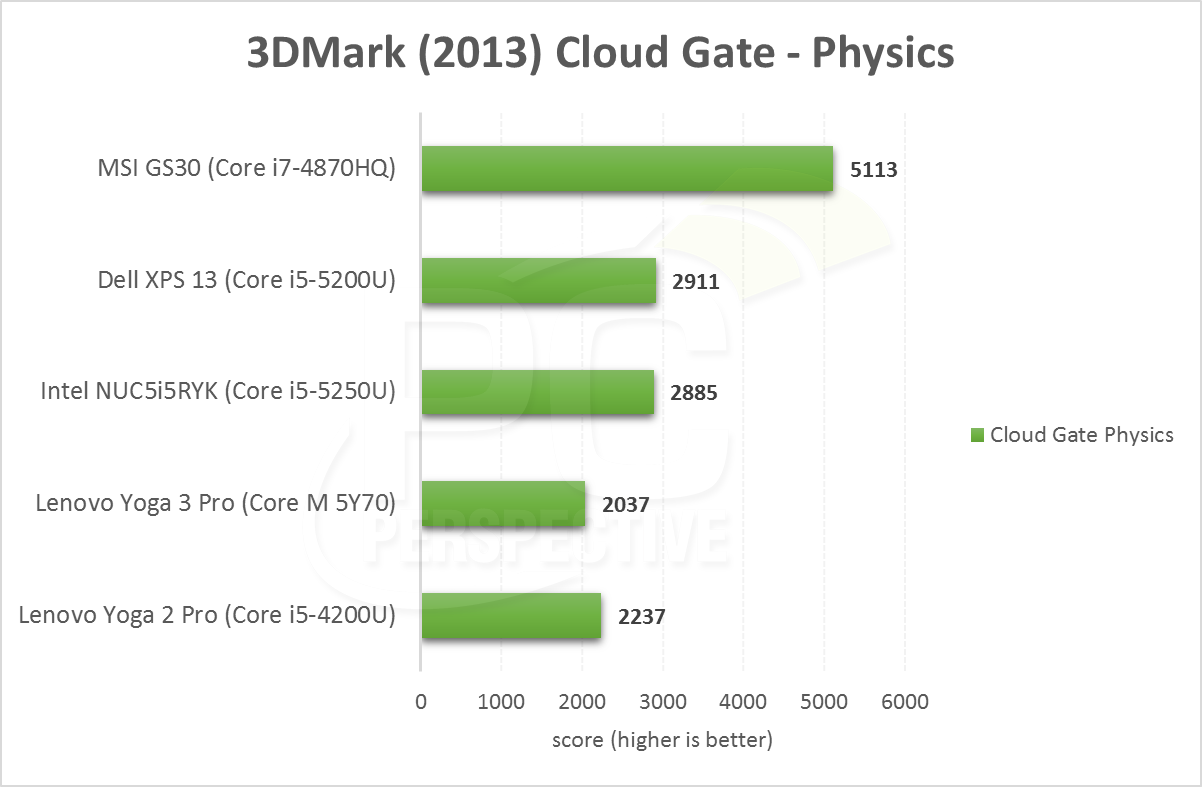 The first bit of graphics testing comes from 3DMark and the Cloud Mark test. The overall result is 65% faster on the Core i7-4870HQ than on the Intel NUC5i5RYK using Broadwell Core i5-5200U. On the graphics specific test, the Iris Pro Graphics 5200 scores >52% higher than two Broadwell systems we are tested. 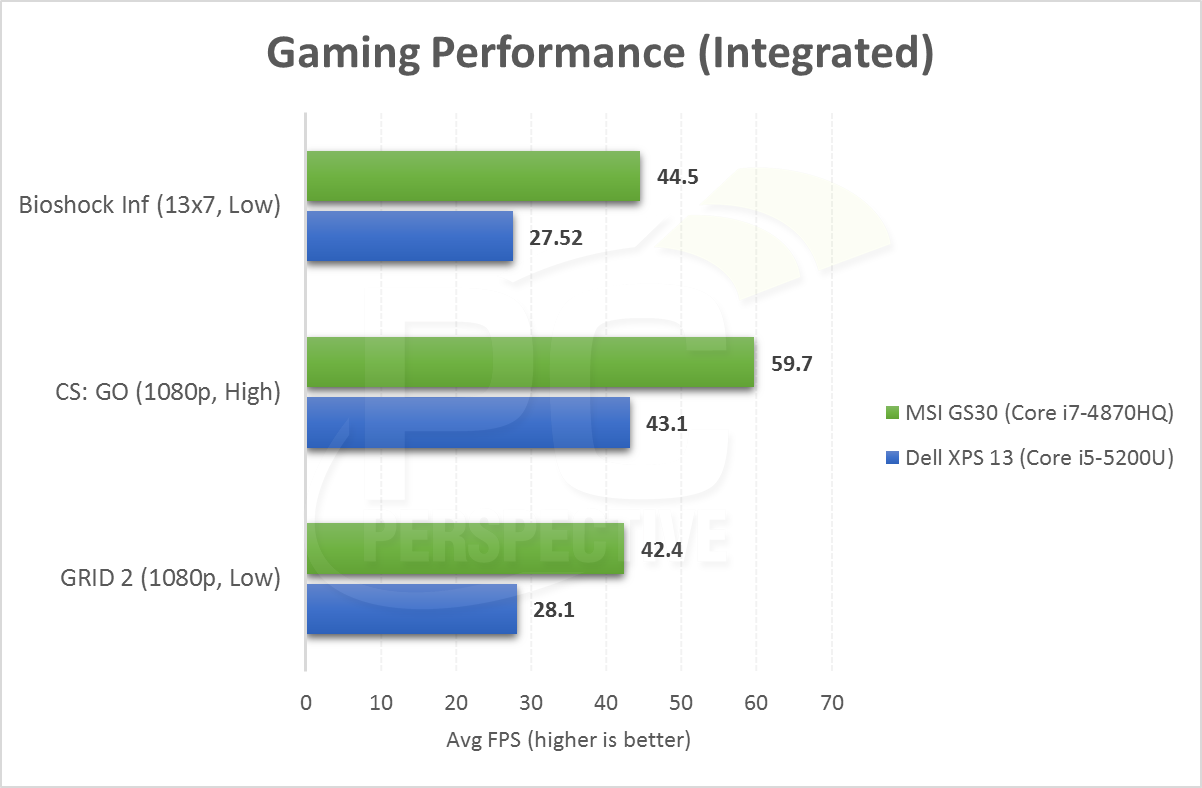 Finally, just to give us some real-world context to the gaming performance of the GS30 (again, without a docked, discrete graphics card), I ran a few games on it and compared it to the Dell XPS 13. In Bioshock Infinite the Core i7-4870HQ is 61% faster than the Core i5-5200U, Counter-Strike: GO is 38% faster on the GS30 and GRID 2 runs 50% faster. These are impressive numbers, but again, at the cost of heat and noise (and battery life).