Power is always an interesting result considering how everything seems to be more optimized for low power consumption anymore.  This is a good thing!  Until of course we get that whole Skunkworks Fusion Reactor going.  AMD did talk quite a bit about how the R9 285 does pull down less power than previous products.  Interestingly enough, the 285 does have a higher transistor count by about 700 million or so as compared to Tahiti which powers the R9 280X.  The 280X is higher clocked, so take that into account when looking at results. 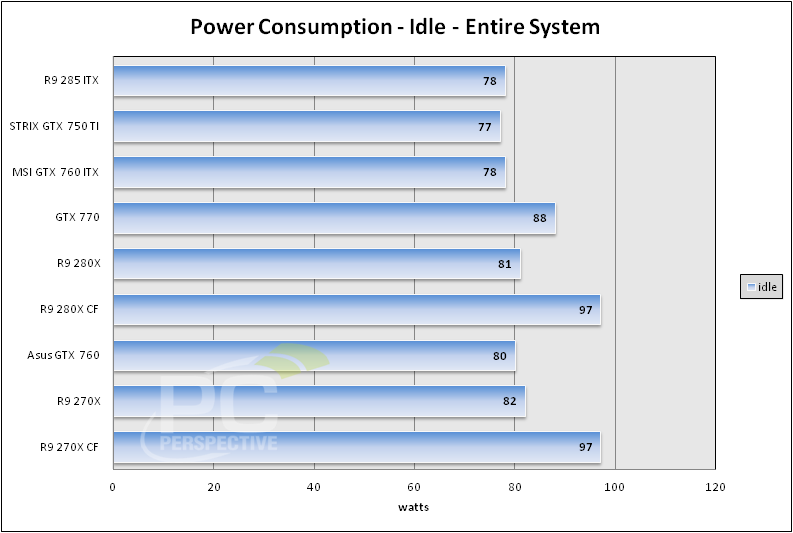 At idle all of the single GPU cards are pretty close together.  The older GTX 770 is leading the rest of the pack with 88 watts at the wall.  Not a huge difference between them all, but that was the only real outlier in single GPU testing.  The R9 285 is among the lowest of the group. 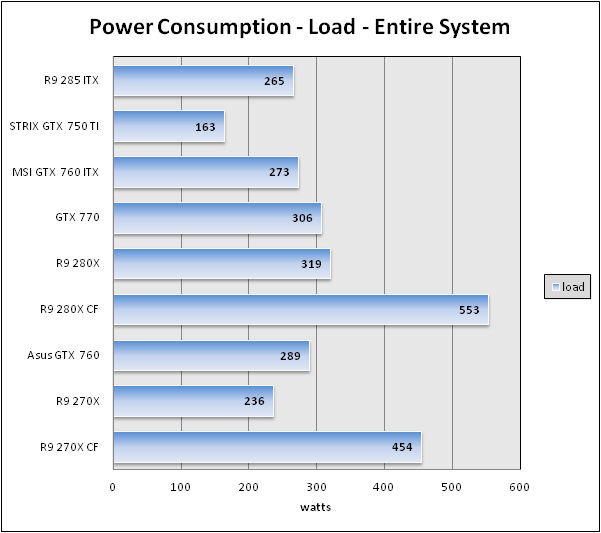 At load we see some really interesting results.  Of course the 750 Ti based on Maxwell is the lowest power part, but it is also the slowest.  Still, in terms of power/performance it is among the best in the group.  The R9 285 does pretty well here.  Not as low power as the R9 270X, but it stays around the GTX 760 area.  What is nice is that it does, on the whole, perform faster than that older Kepler based part.  At times, it is even as fast as the R9 280X which is some 55 watts higher than the 285.  Overall it is a good showing for the R9 285 ITX.  It is pretty efficient on the AMD side and beats out the previous Kepler based products by a decent amount.

The problem with small cards that still sport a full size GPU with a TDP range above 150 watts is that it gets a lot harder to remove that heat with a smaller sized heatsink.  Some serious common sense there, I know.  There are obviously designs that an engineer can use to pack as much aluminum fin surface area in there to help dissipate heat.  These include tightly packed fins, heatpipes for better heat spread and transfer, as well as enough airflow to keep everything in check.  Sapphire has utilized all of these things with a pretty large, but relatively slow moving fan. 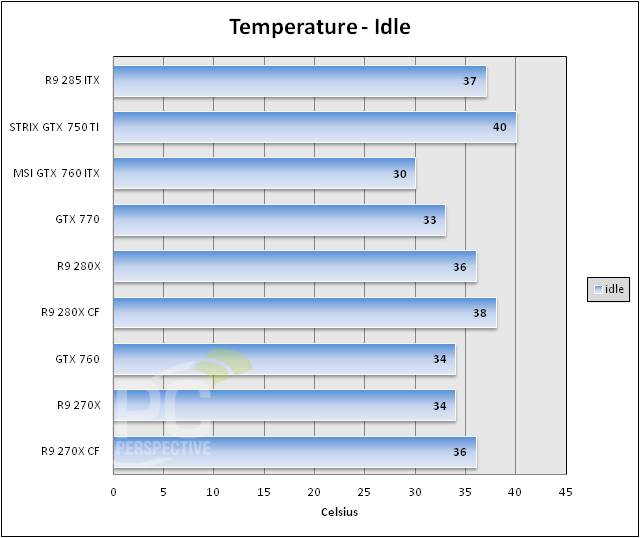 At idle we see a little separation between the contestants.  The R9 285 is one of the higher results, but it is certainly not burning a hole in the carpet.  The Strix 750 Ti gets that result by not spinning the fans at all at idle.  All of these solutions keep temperatures at a minimum. 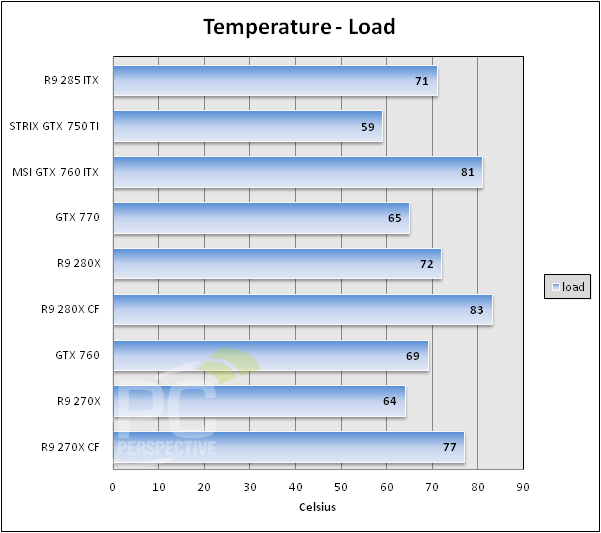 At load we see some separation between the cards.  The Sapphire R9 285 ITX is not the coolest card, but considering how it fares against the MSI GTX 760 ITX it does very well.  A full 10C separates the two and the Sapphire card keeps slightly quieter throughout operation.  It is 12C warmer than the STRIX 750 Ti, but that particular part is a sub 75 watt TDP card.  Not exactly a hard chip to cool.  What is interesting is that it compares well to the Asus R9 280X with a dual fan, large cooler setup.

The R9 285 has a reputation of being a pretty easy overclock.  Clockspeeds do not reach stratospheric heights, but it is quite easy to get them to the limit of the chip.  Power was set to 120% and the speeds were increased until the GPU became unstable.  I then knocked it down 5 MHz and then started with the memory overclocking. 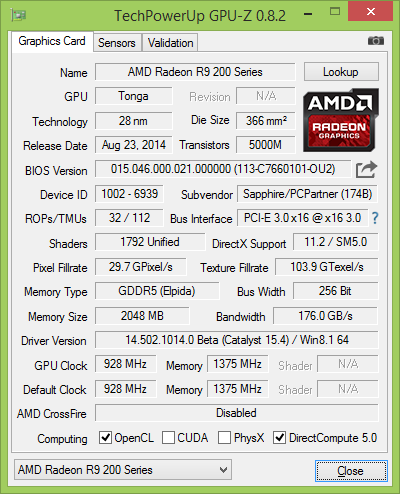 At stock speeds the card is not really pushing any boundaries.  The older Tahiti chip was singing along at 1 GHz months after its release (remember the GHz Edition?).  928 MHz is a slight overclock from 918 MHz standard, but obviously the chip had some legs.  Considering that the cooling is actually quite impressive for a card this size, I expected quite a few more MHz than what 928 would give us. 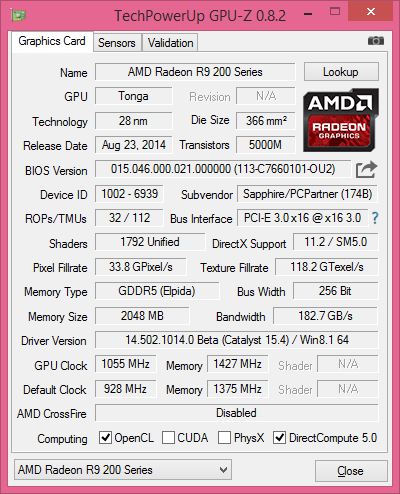