The board does not have a huge amount of real estate, so this necessitates the use of a single 8 pin PCI-E power connection to deliver around 150 watts to the board.  The main PEG connection also supplies 75 watts.  The Tonga GPU is rated for around 190 watts TDP, so the 225 watts delivered to the board should be more than adequate for general usage with a good amount of space for overclocking.  The power VRMs are cooled directly from the large 85 mm fan (you can look through the aluminum fins under the fan and see the power components directly underneath).  The card is slightly overclocked to 928 MHz core with the memory at 5500 MHz effective.  This is obviously not a huge overclock, but it is a nice perk for such a card. 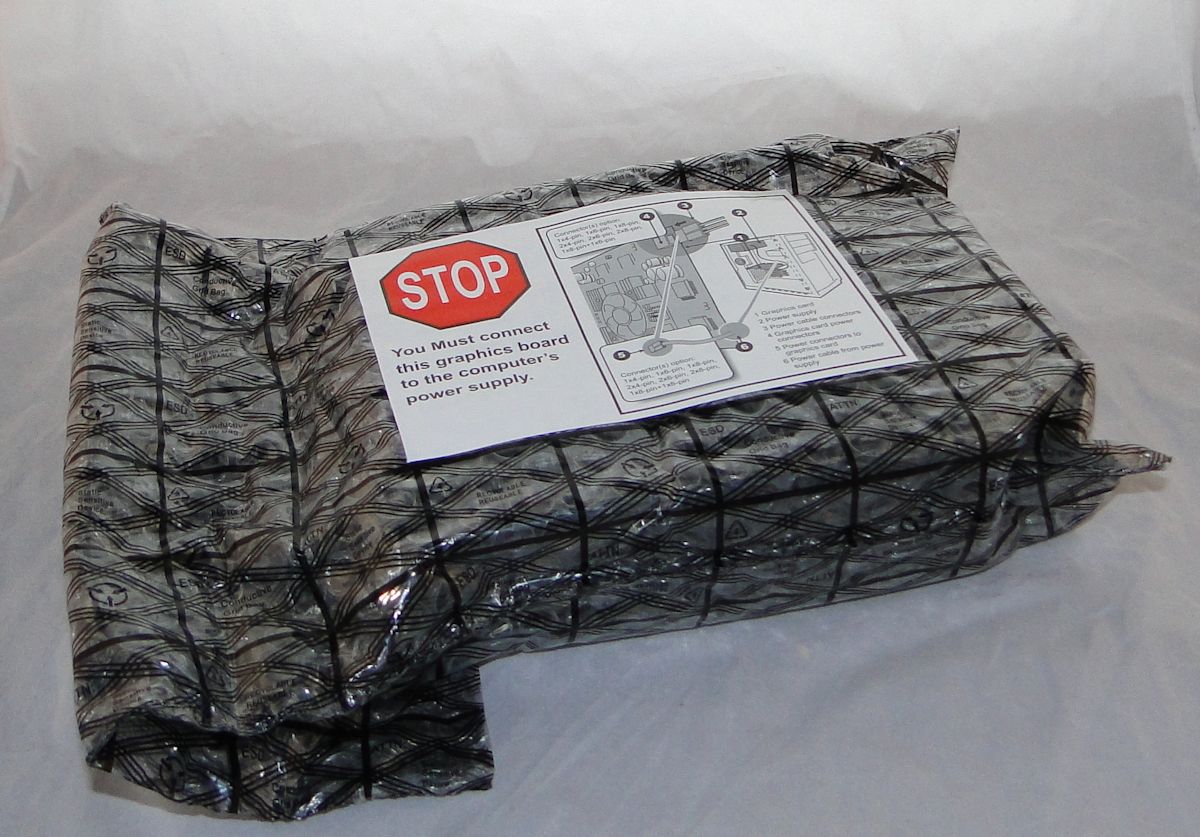 The sleeve around the card is again nicely padded and protects from ESD. Now if it could protect from EMP…

This particular unit comes with 2 GB of GDDR-5.  The GPU can actually handle 4 GB of memory, but as of this generation of parts (or at least naming schemes) 2 GB is the maximum amount for this particular product.  2 GB is fine for most applications at 1080P, but becomes a bit of a squeeze with later titles running at 2560×1600 and above.  4K is right out not only because of the memory pool, but also that the R9 285 simply doesn’t have the horsepower to push that particular resolution. 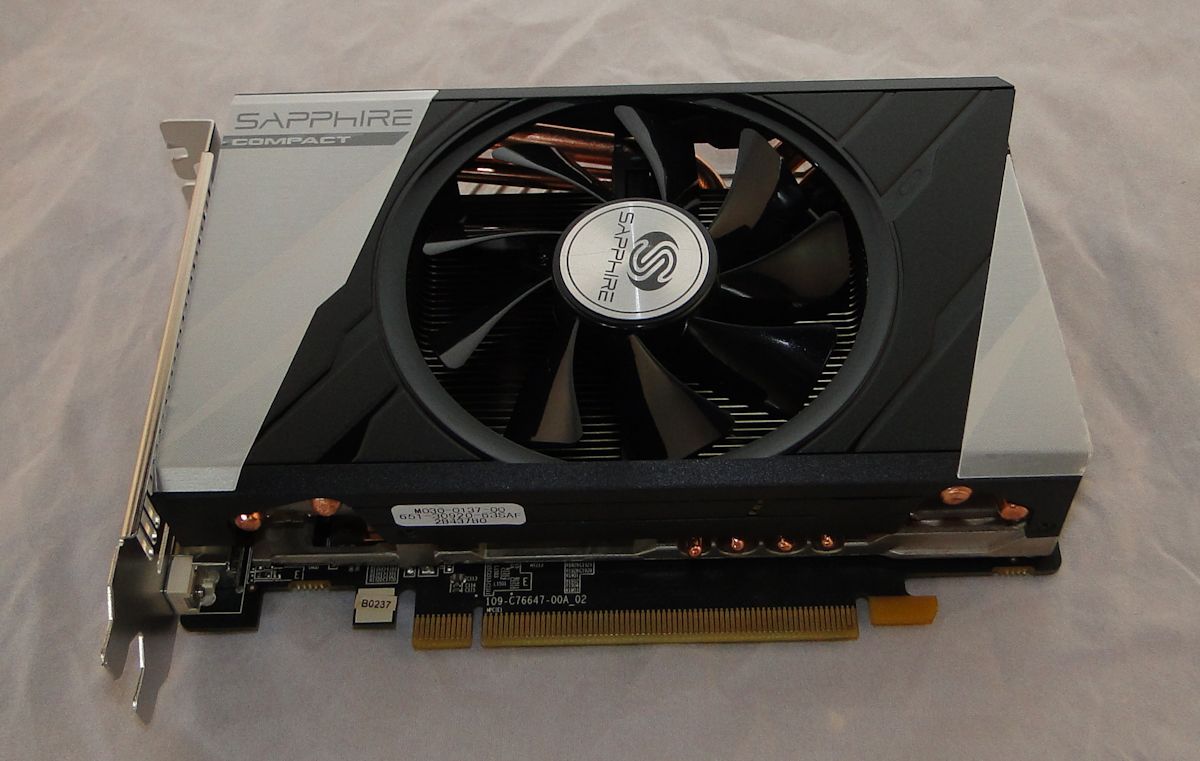 The card is clean and attractive.  Nothing looks askew and the aesthetics are nicely done.

Outputs for the board include Dual Link DVI-I, 2 x DisplayPort 1.2a, and HDMI 1.4a.  This card supports FreeSync without any issue through the DP 1.2a ports.  Some were disappointed to see that it also did not support HDMI 2.0.  The outputs are plentiful enough to drive a 3 x Eyefinity setup.  CrossFire is achieved without the over-the-top connector due to the xDMA connection that communicates through the PCI-E bus that the graphics cards are plugged into.  xDMA allows transfers without having to go through the CPU or main memory to achieve the necessary performance to do high resolution CrossFire.  As of this time AMD has not offered a driver that will support CrossFire and FreeSync at the same time.

Sapphire usually produces a pretty solid bundle in a well protected box.  This is no exception.  The box is not overly large, but it is well padded within using a recycled cardboard form.  The card is placed in a static resistant padded bag and nestled very snugly in the box.  The box itself has a significant number of accessories, which is becoming rarer throughout the years.  There is the now ancient DVI to VGA adapter, an HDMI extension cable, a mini-DP to DP adapter, and a 4 pin molex to 8 pin PCI-E power adapter.  It of course comes with the installation CD, installation manual, and product warranty.

The manual is not terribly informative about the individual card.  One piece of information that was not covered anywhere on or in the box was which position the S button needed to be in to activate the UEFI firmware.  I eventually found that information on the Sapphire website, but was buried deep within the product description on the webpage.

The CD has some older drivers as well as an older version of the TriXX software.  TriXX is Sapphire’s overclocking utility, which is supposed to be on par with products from MSI, EVGA, and Asus.  It should allow a user to set the power limit and overvolt the card.  TriXX should allow as high of an overclock as the card and cooling system can handle.  I installed the latest version and it did not allow the adjustment of voltage.  It had limited bands of how high it could clock.  In fact, as the screenshot below shows, it really is a bit buggy in terms of actually getting a good idea where you are at in overclocking.  The MSI and Asus applications might be a better idea here if a user wants to overclock. 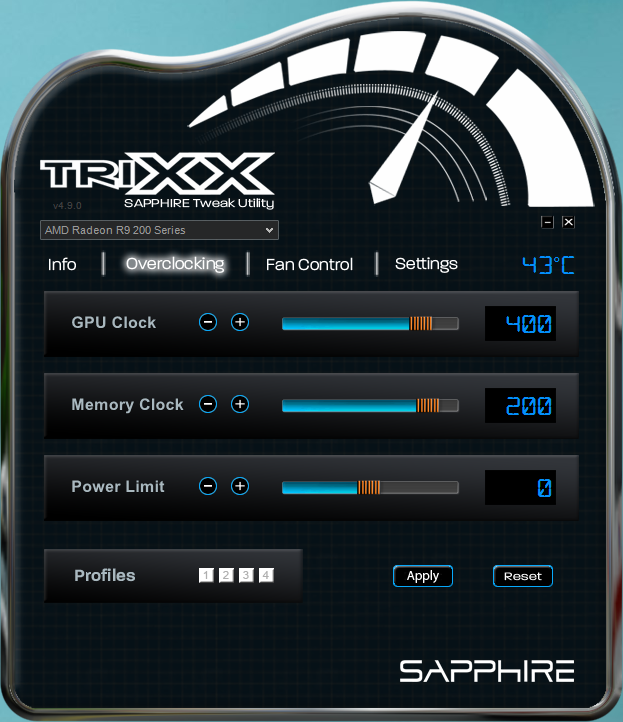 The build quality of the card seems very good.  The heatsink and fan assembly are pretty heavy and everything is attached very tightly to the card.  About the only problem that I see is that there are two larger SMT parts that are taller than the screws that attach the heatsink to the PCB.  If a user drops or places the card onto a hard surface, there is a possibility of dislodging or cracking those parts.  This is likely quite an uncommon occurrence, so it is essentially nit-picky.

Installation was simple and straightforward.  The single 8 pin power connection is easy to reach and access.  Having a single cable is actually nice as compared to having to plug in 2 x 6 pins, but that is again a stretch in terms of it being a positive.  Booting into Win 8.1 was fast, even with the Legacy firmware setting enabled.  Drivers were applied successfully and we were a go.

The card is actually very quiet.  At idle speeds around 40% the fan is whisper quiet.  Even at full load I never saw the fan reach 50%.  At the slightly higher revolutions I could start to hear the fan as long as there was not any other ambient noise around.  The fan sound was very muted and not annoying in the least.  When gaming with speakers I could not hear the fan at all over the game audio.

I had absolutely no problems during testing with this particular card.  All tests ran as expected and I received no crashes or errors during use.  A variety of overclocking applications work perfectly fine with the card as well.  Due to time constraints I was unable to test the card in CrossFire.

GeForce Experience 3.6 Has Vulkan and OpenGL