At under $1,500, this is one enticing package. We break it all down for you in our review.

With the introduction of the ASUS G751JT-CH71, we’ve now got our first look at the newest ROG notebook design revision.  The celebrated design language remains the same, and the machine’s lineage is immediately discernible.  However, unlike the $2,000 G750JX-DB71 unit we reviewed a year and a half ago, this particular G751JT configuration is 25% less expensive at just $1,500.  So first off, what’s changed on the inside? 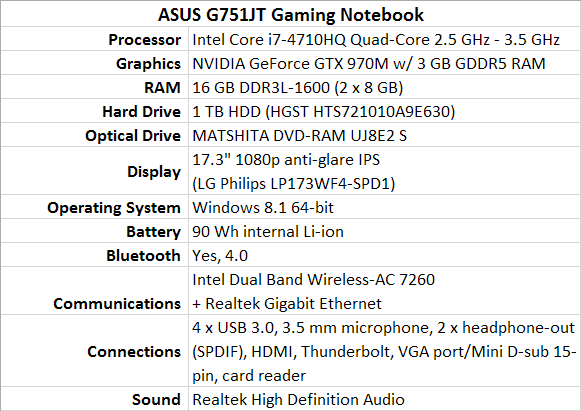 (Editor's Note: This is NOT the recent G-Sync version of the ASUS G751 notebook that was announced at Computex. This is the previously released version, one that I am told will continue to sell for the foreseeable future and one that will come at a lower overall price than the G-Sync enabled model. Expect a review on the G-Sync derivative very soon!)

Quite a lot, as it turns out.  For starters, we’ve moved all the way from the 700M series to the 900M series—a leap which clearly ought to pay off in spades in terms of GPU performance.  The CPU and RAM remain virtually equivalent, while the battery has migrated from external to internal and enjoyed a 100 mAh bump in the process (from 5900 to 6000 mAh).  So what’s with the lower price then?  Well, apart from the age difference, it’s the storage: the G750JX featured both a 1 TB storage drive and a 256 GB SSD, while the G751JT-CH71 drops the SSD.  That’s a small sacrifice in our book, especially when an SSD is so easily added thereafter.  By the way, if you’d rather simply have ASUS handle that part of the equation for you, you can score a virtually equivalent configuration (chipset and design evolutions notwithstanding) in the G751JT-DH72 for $1750—still $250 less than the G750JX we reviewed. 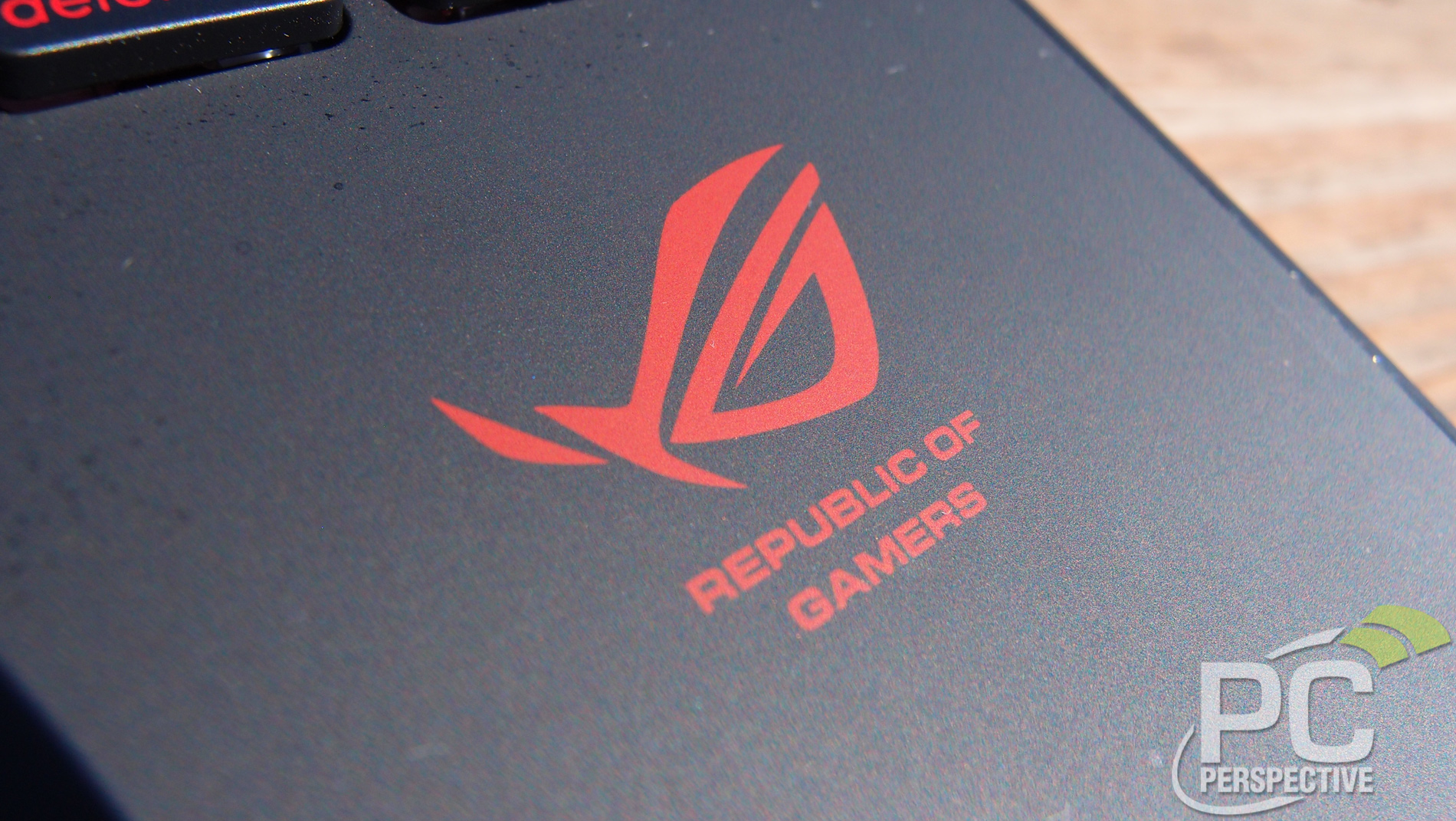 The G751JT’s design retains the popular F-22 Raptor-inspired appearance, but swaps out materials in various places to spruce up the lid a bit while simultaneously cleaning up the base unit.  The new color scheme is an attractive black with red accents, not unlike that of the Alienware machines.  Fortunately a lack of shiny, reflective surfaces is implied, and the G751JT features none of them—a great way to make a first impression in our book. 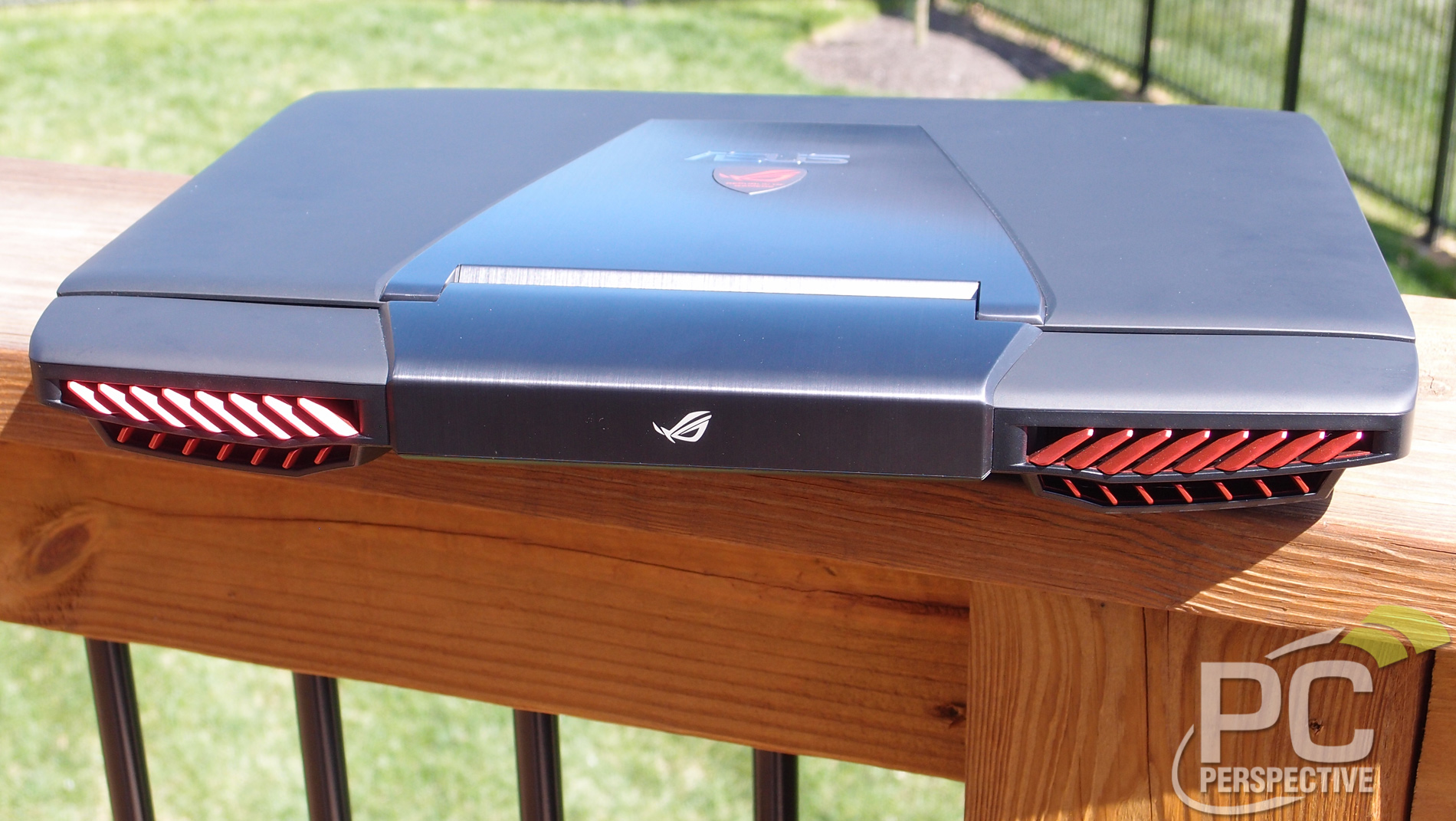 The lid is similar in concept, with a single central hinge attaching visibly from the back.  The hinge has shrunk some, and this does result in notably easier twisting near the base of the display—but in practice this is unlikely to prove detrimental.  Returning is the ledge behind the screen which serves as a handy grip point while the unit is being moved—fortunate in light of its considerable weight.  The lid does twist somewhat more easily than we might have hoped, but pressure from the back produces zero artifacts on the LCD panel.  In terms of weight, the machine posts a significant 8.4 lbs.—pretty hefty to be sure, but then again, who’s buying a gaming notebook for extreme portability? 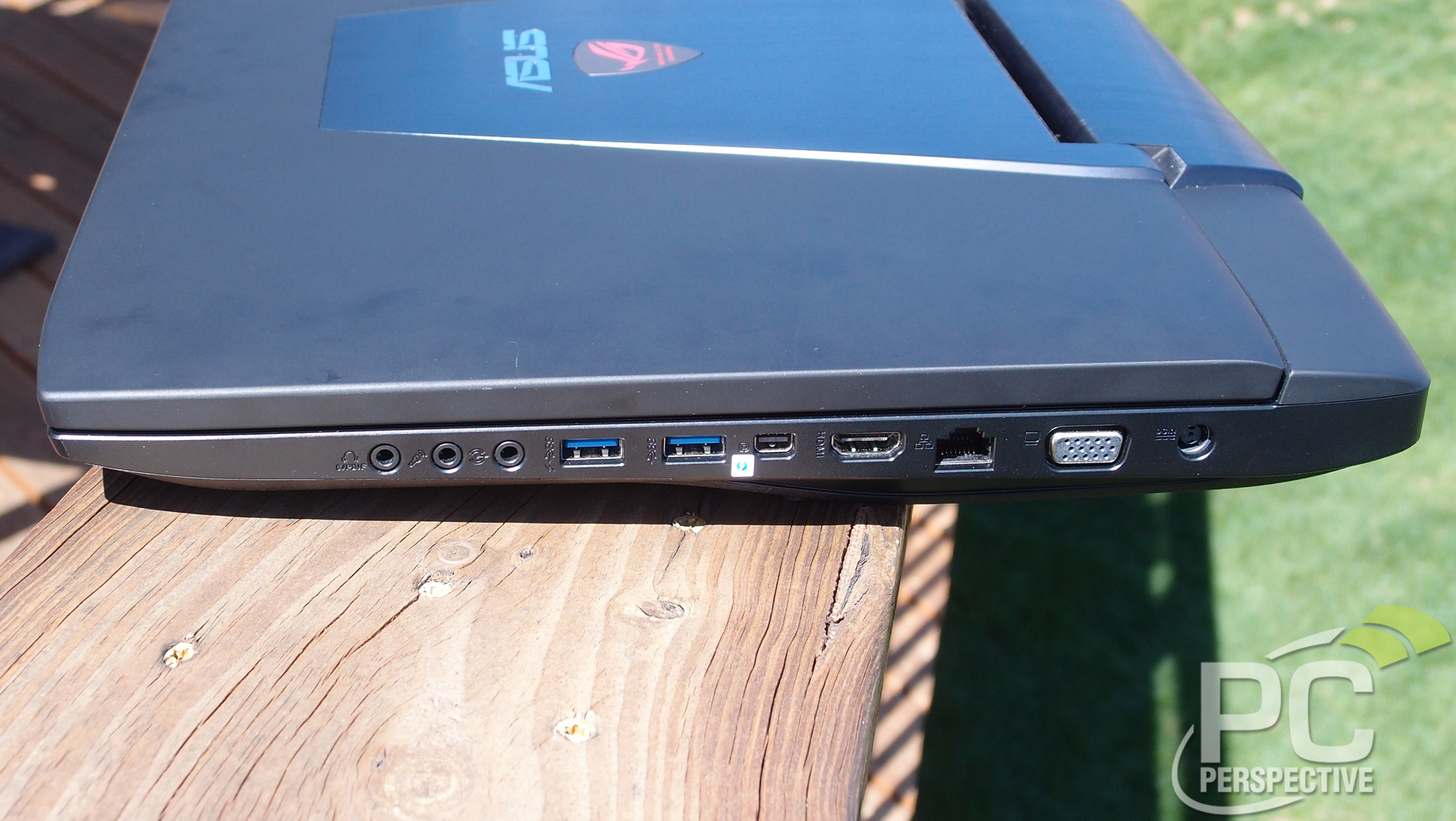 Opening up to the base unit, we find that the sleek brushed aluminum has been replaced by a matte, soft-touch material that seems comparably sturdy but which is notably more subdued.  Aesthetically this change is preferable by our judgment, however it should be noted that fingerprints and smudges are now more of an issue than they ever were on the G750.  Of course, a mildly damp paper towel can clean it up with relative ease, but it still amasses and visibly preserves the skin’s oils to an alarming degree. 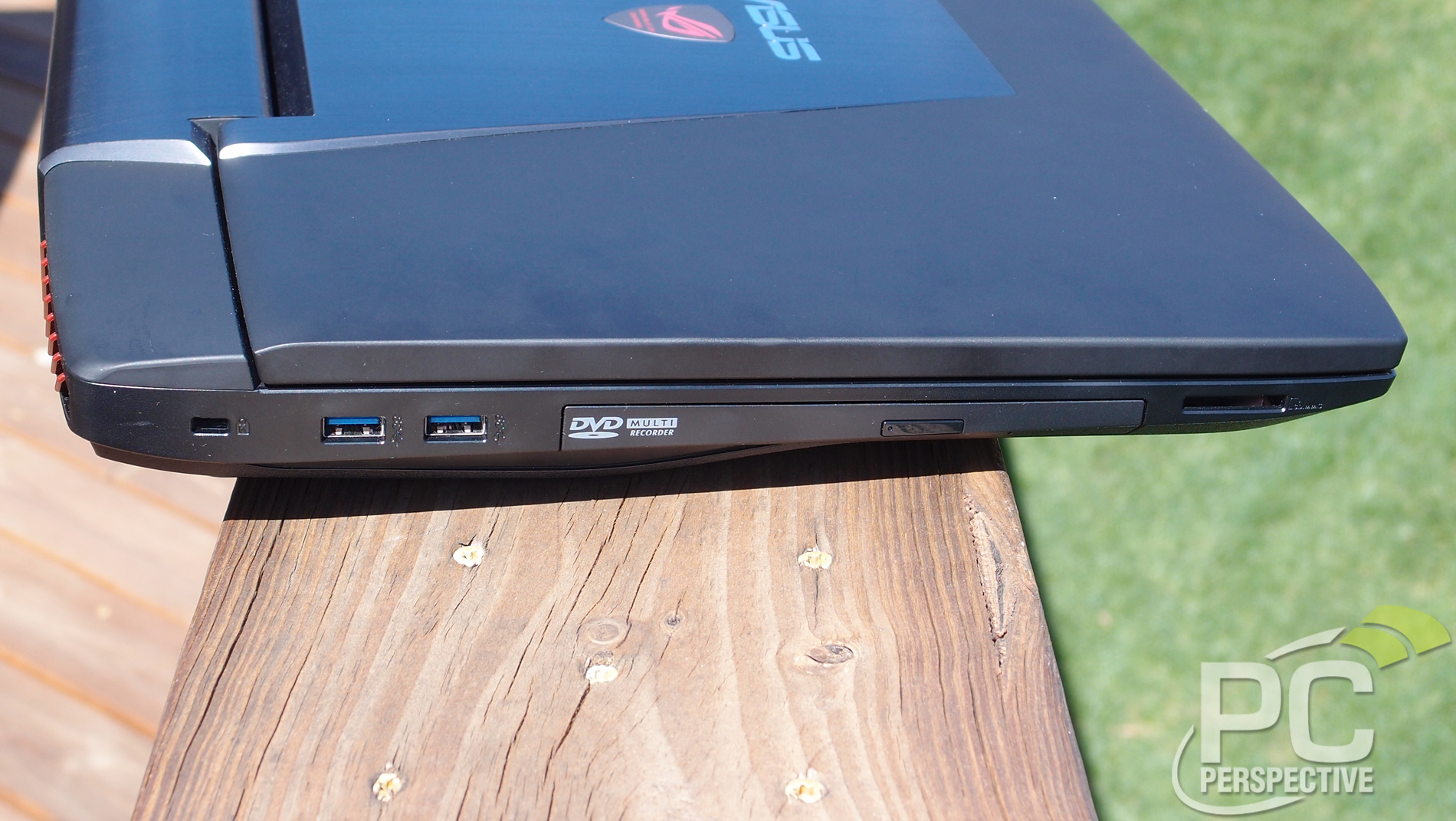 In terms of ports, literally nothing has changed from the G750J to the G751J—and that’s not a bad thing.  You’ll find a total of four USB 3.0 ports alongside VGA, HDMI, and mini-DisplayPort (doubling as Thunderbolt) for video output, as well as Gigabit Ethernet and a card reader.  The addition of one audio port—a line-out—to accompany the existing headphone and microphone ports is nice.  Apart from that, no surprises here. 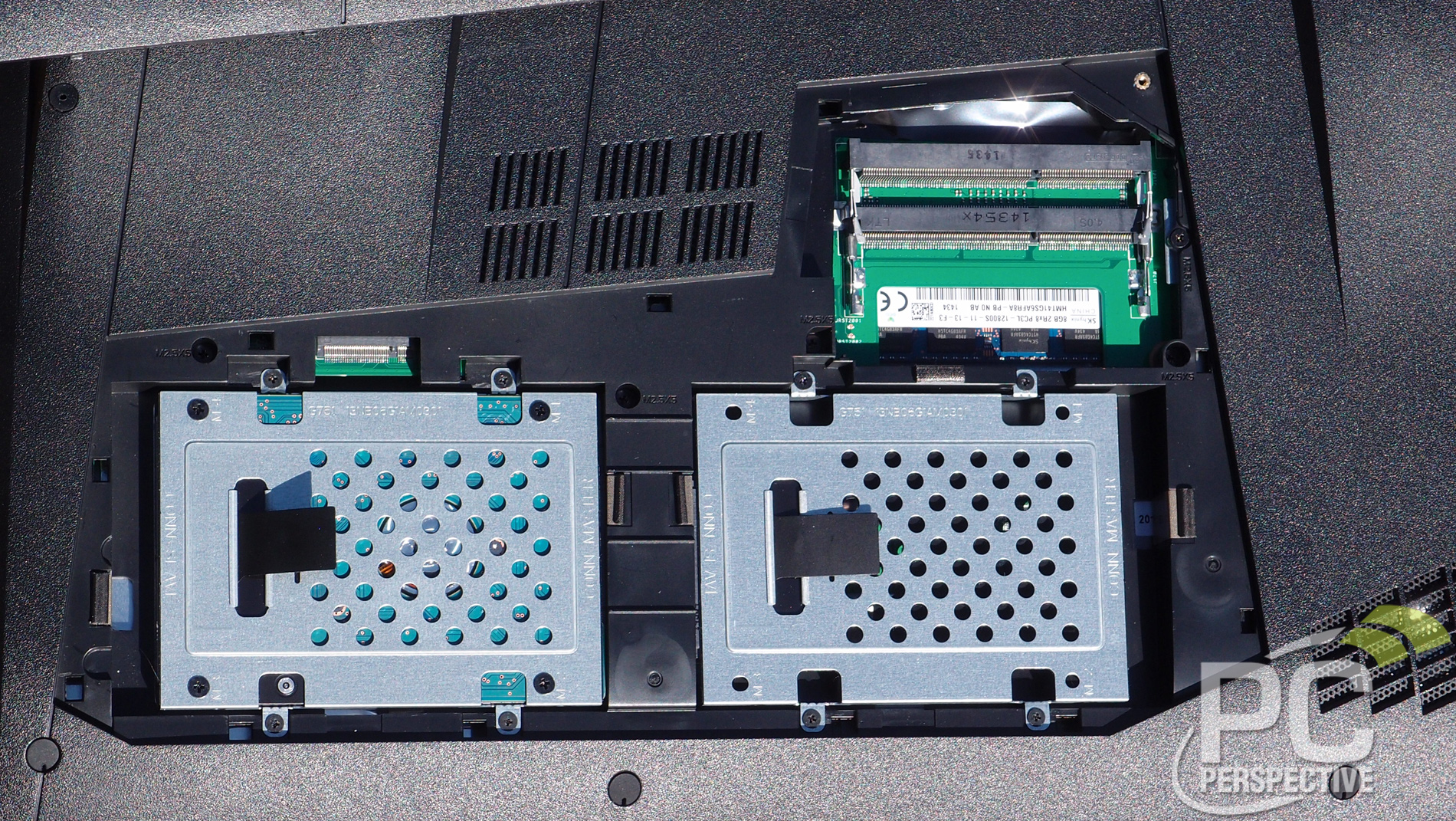 Maintenance is also identical to that of its predecessor.  A single panel on the bottom is secured by a single Phillips-head screw.  Beneath it, you’ll find two of the four RAM slots (the other two are on the opposite side of the system board), along with both 2.5” (9.5 mm) hard drive bays.  We were pleased to discover that in spite of our unit’s lack of a second storage drive, the bracket was still installed and ready to accept an SSD of our choosing, making aftermarket upgrades a breeze.