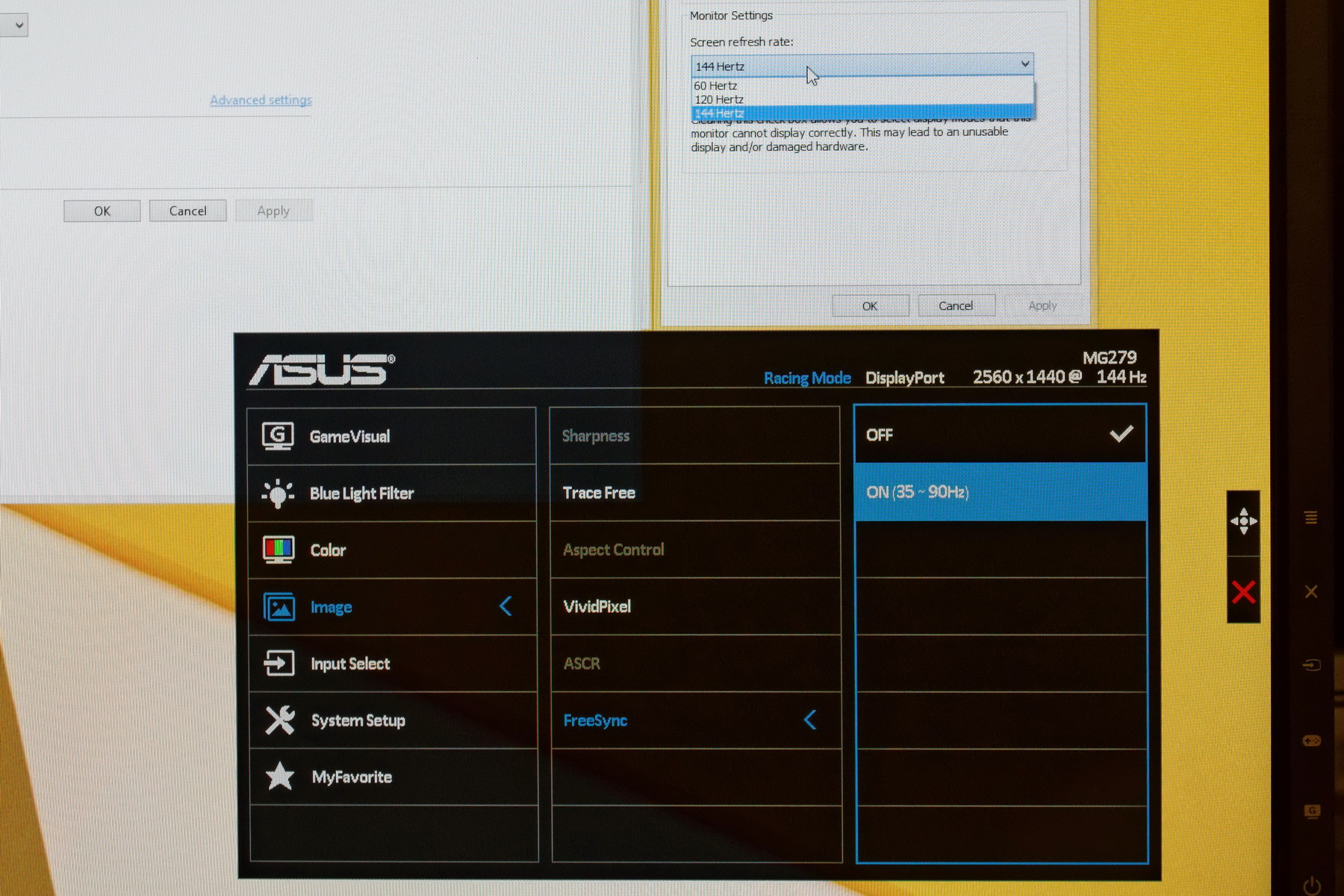 First thing's first. When we connected this display, we were not greeted with the familiar 'FreeSync panel detected' pop-up. We also did not see any options available in the AMD driver. This is because you must specifically enable FreeSync mode through the OSD. Why the need for a difference from the other FreeSync panels available? This is the first display where its maximum refresh rate (144Hz) is *not* the same maximum available when in VRR mode (35-90Hz). The reason for this inconsistency is likely down to a choice in how VRR ranges relate with the hardware limits and timings of a given LCD panel. ASUS could have likely opted for a 144Hz maximum in VRR mode, but that may have come with a 40Hz minimum. FreeSync panels have come under fire lately partially due to this limit being on the high side, so instead we have the MG279Q running with the 35-90Hz range we see today.

Looking closer at the above screen, you'll note that the available refresh rates prior to enabling FreeSync mode are 60, 120, and 144Hz. Once enabled, the display reinitializes (Windows sees it as a disconnect / reconnect) and upon return a 90Hz option is added to that list. 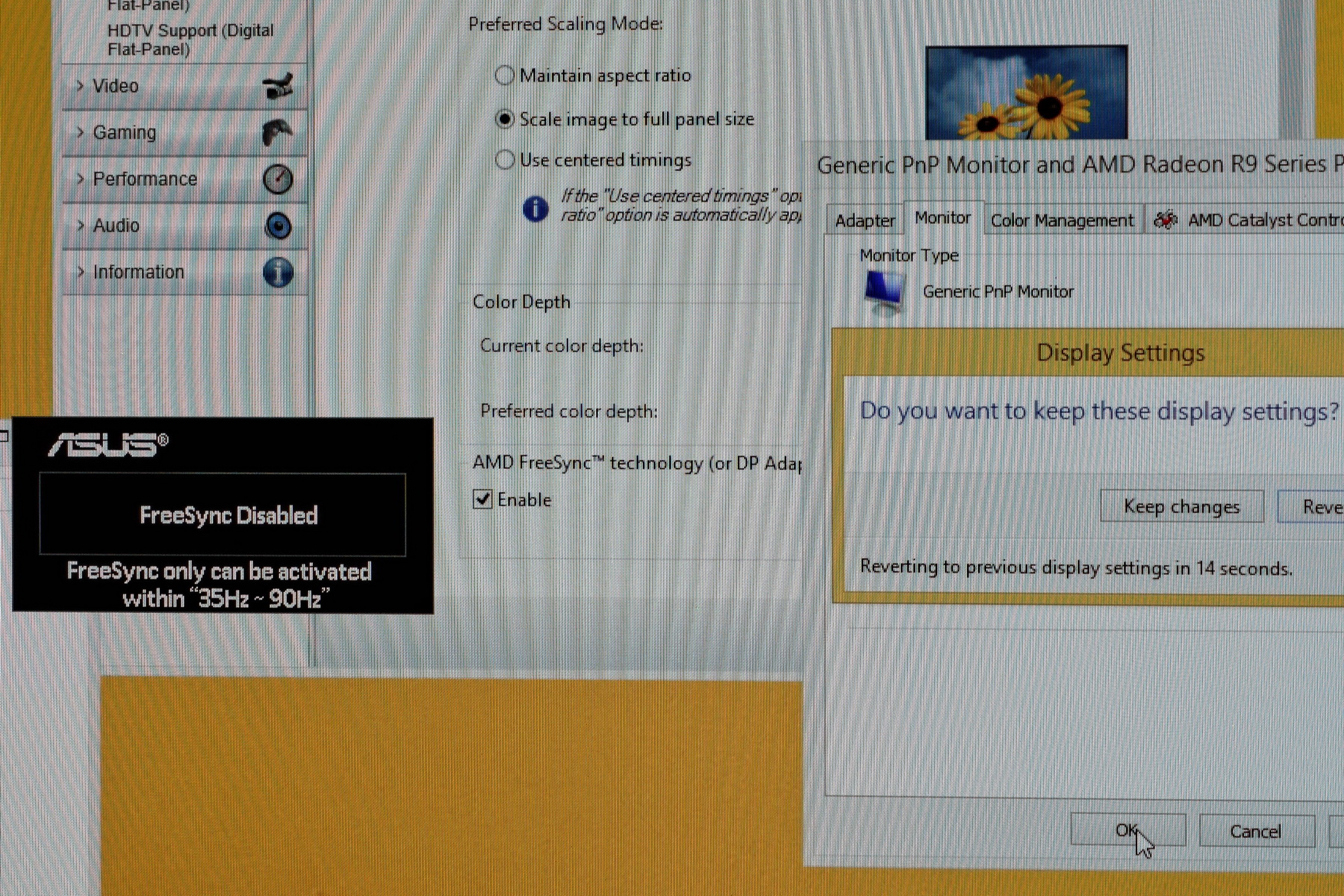 With FreeSync enabled in the AMD driver and on the display OSD, switching Windows to 120 or 144Hz results in the above image. The display hard-disables FreeSync mode as its timings can't handle the 35-90Hz range at such a high draw rate/speed. 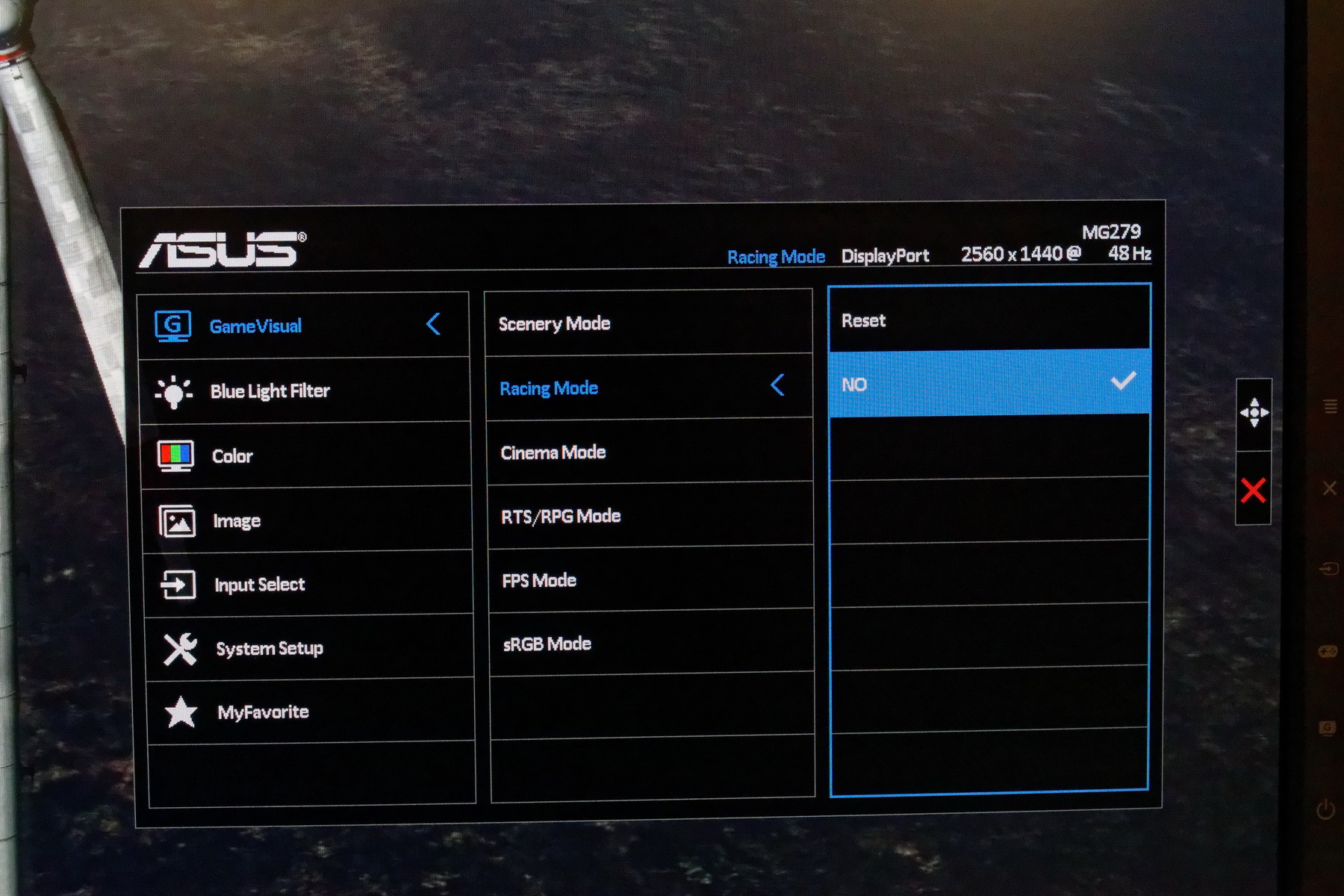 Before moving onto overdrive I wanted to make a quick mention of the 'GameVisual' modes. First was the slightly confusing typo in the selection box, where the display tried to suggest that every mode, when selected, was "NO" as opposed to what we can only guess was "ON". Also of note to those desiring to calibrate this display, the sRGB mode may seem the logical choice, but that mode disables many of the options you would need to calibration (even brightness is disabled). Ironically, the most customization options are only available in 'Racing Mode' (the factory default). Odd naming aside, it appears to be the mode that comes closest to a good base for calibration purposes and overall general use.

Our experiences at the various refresh rates were consistent with the results seen by TFTCentral in their review of this same display, but things changed when we entered an actual gaming mode that employed variable refresh rates. With our display set at 90Hz and FreeSync enabled, we fired up the AMD FreeSync demo. With the display set at the 'Trace Free' value of 60, which was optimal for the desktop, we immediately saw a much different story in this demo: 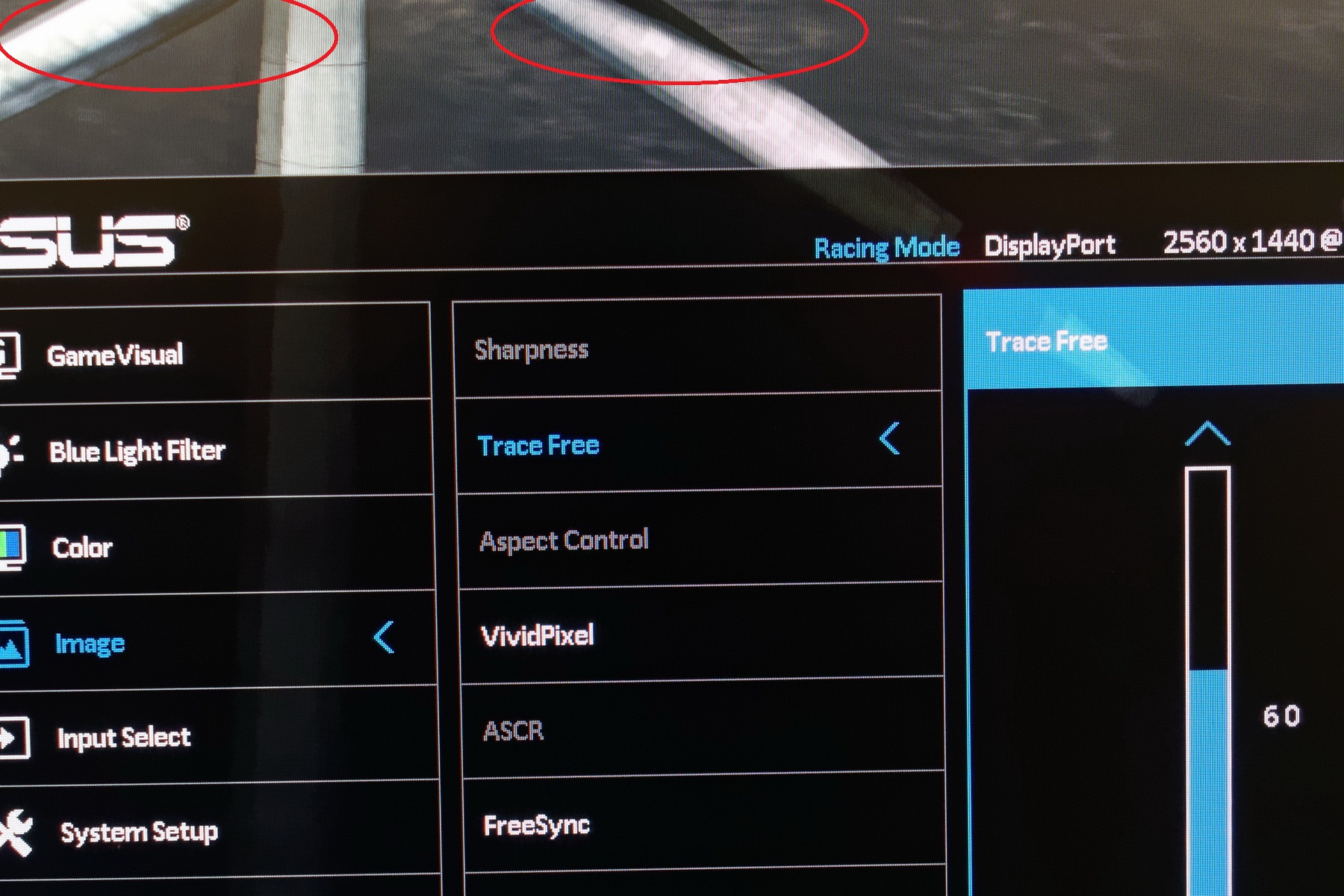 As you can see above, we saw severe negative ghosting in this demo at that setting. We had to move the overdrive (Trace Free) setting far from the optimal desktop (constant refresh) setting to get rid of the negative ghosting, but since we had to move it so far, we were basically turning down the overdrive to the point where we had it nearly disabled, and in that case we were venturing into (positive) ghosting levels nearing what we saw in the first round of FreeSync panels – the ones that had non-functional overdrive. The Trace Free setting adjusts in increments of 20. Above you saw 60. Here is a zoom in on 20: 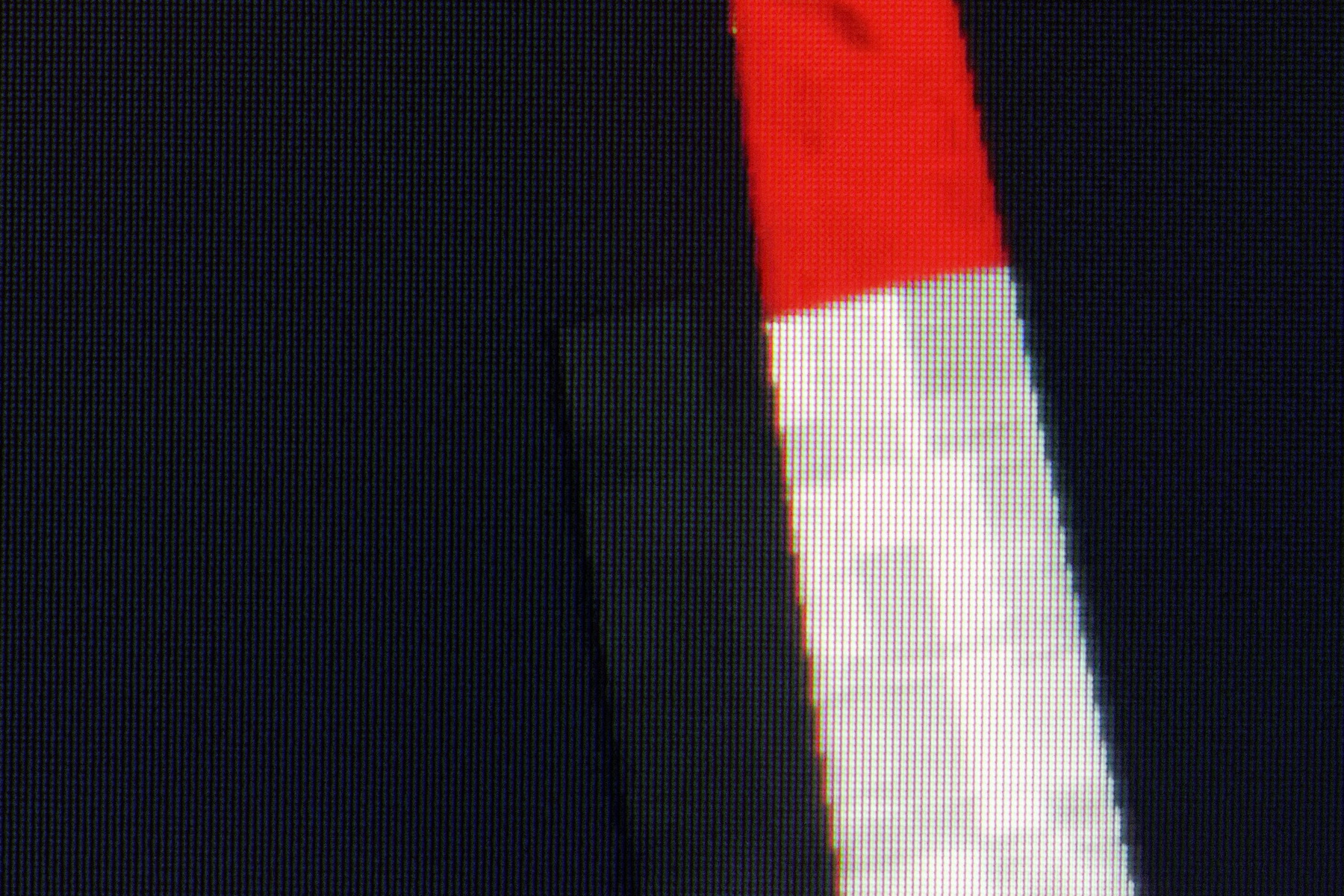 This was the closest to perfect we could get it in the Windmill demo, but you'll notice there is a slight ghost in the trail of the blade. If you look closer though, you'll see a negative ghost around the outer edge of the blade. No setting we tried got rid of both effects. Here is the setting at 0: 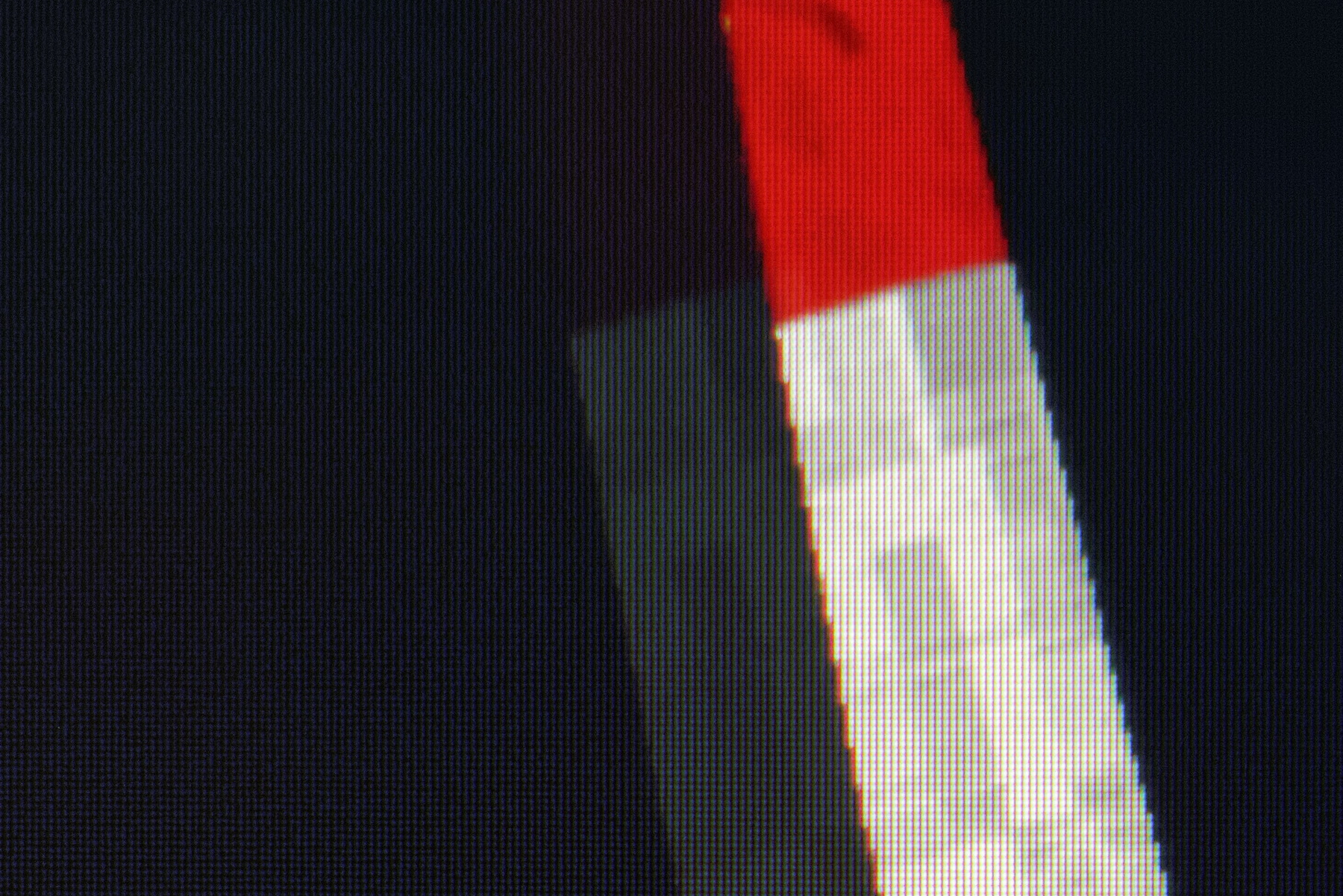 With Trace Free set to 0, the negative ghost is eliminated, but we are ether not overdriving at all or it is very weak, leaving an obvious one frame trail of the blade. This was not as bad as the LG we previously tested (also IPS but apparently a slower response time panel), and seemed on-par with the BenQ (a TN panel). Here is the old image showing ghosting of those panels for comparison: 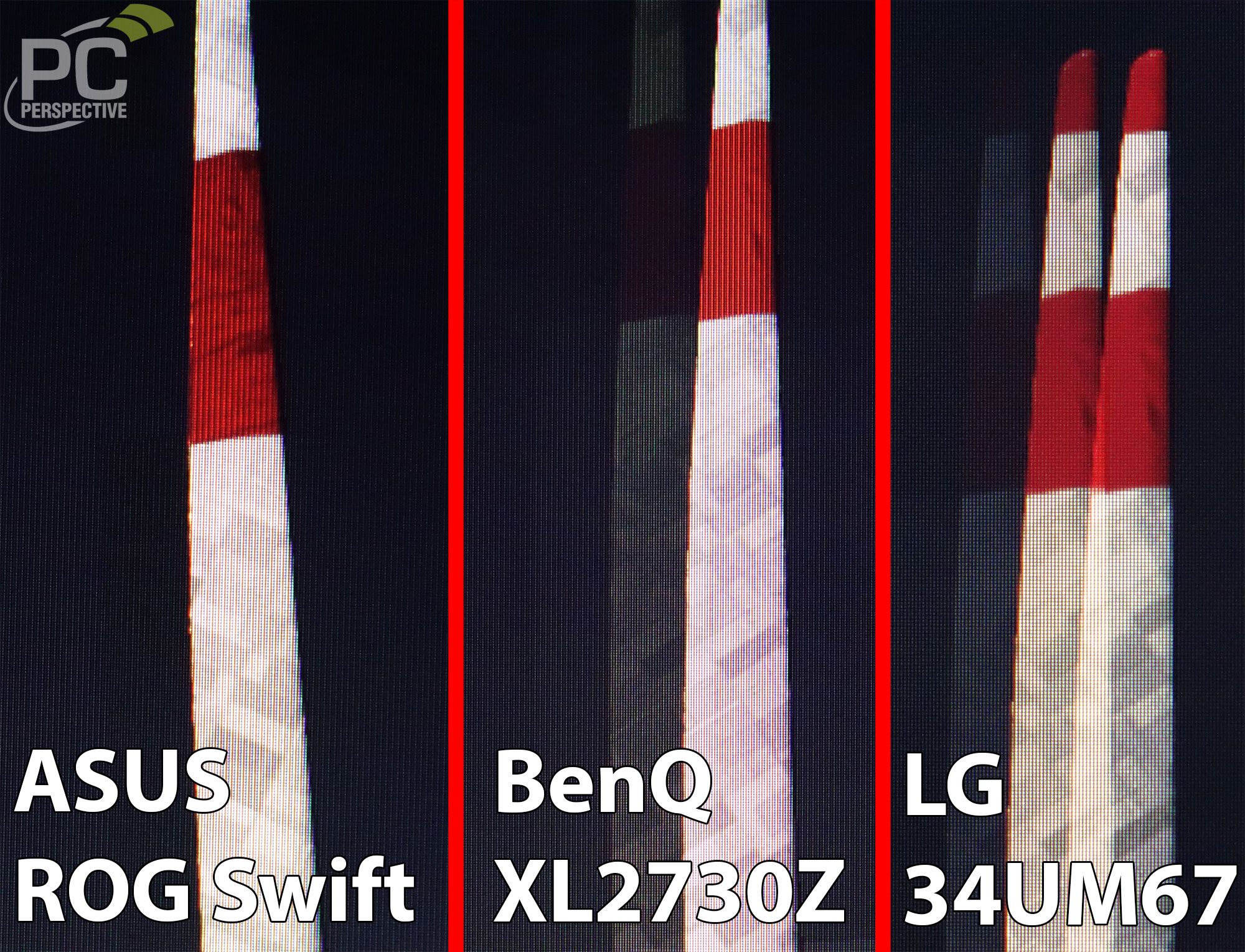 and now the same capture from the Acer Predator G-Sync panel: 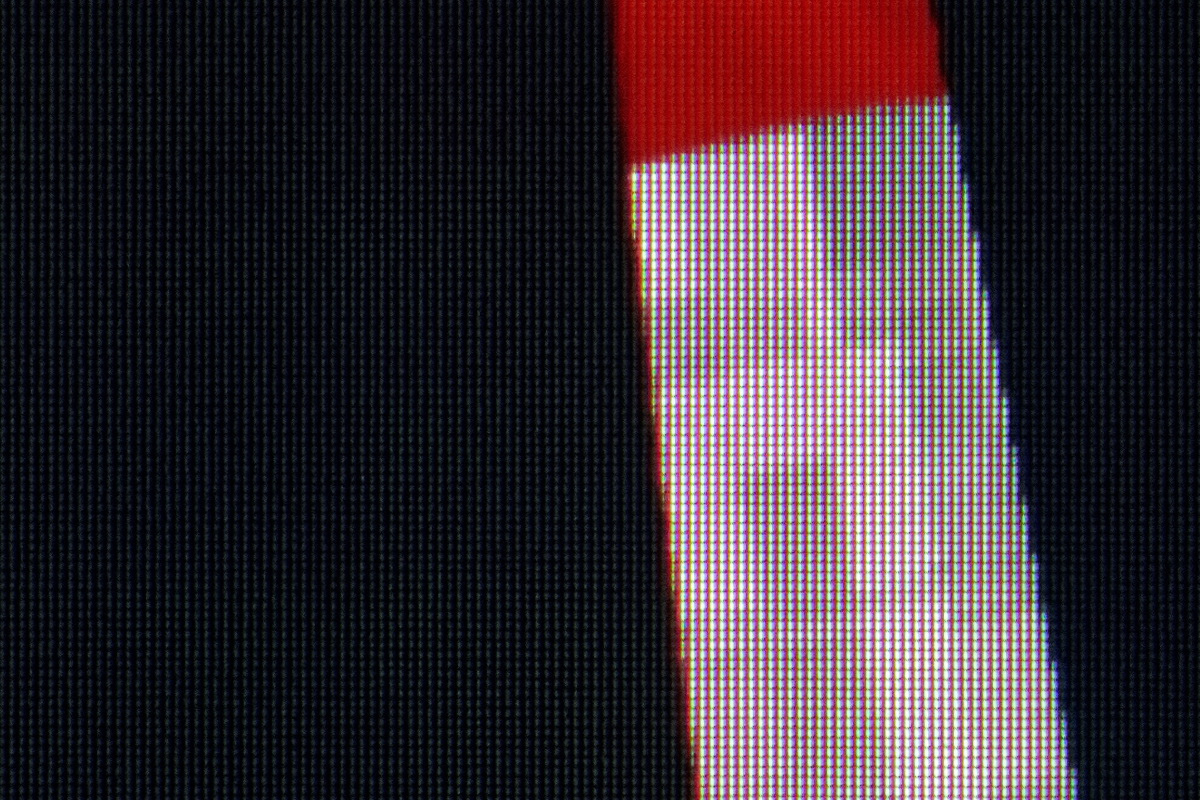 So with that we can say that while overdrive is functional on the ASUS MG279Q, it is not as effective in actual VRR gaming as we would have liked to see. I suspect the possible cause is that the scaler employed in this panel is not as intelligent about its overdrive calculations as is required for 'correct' VRR-based overdrive. Nvidia had a recent slide showing the non-linear effects of overdrive calculations when operating at variable refresh rates: 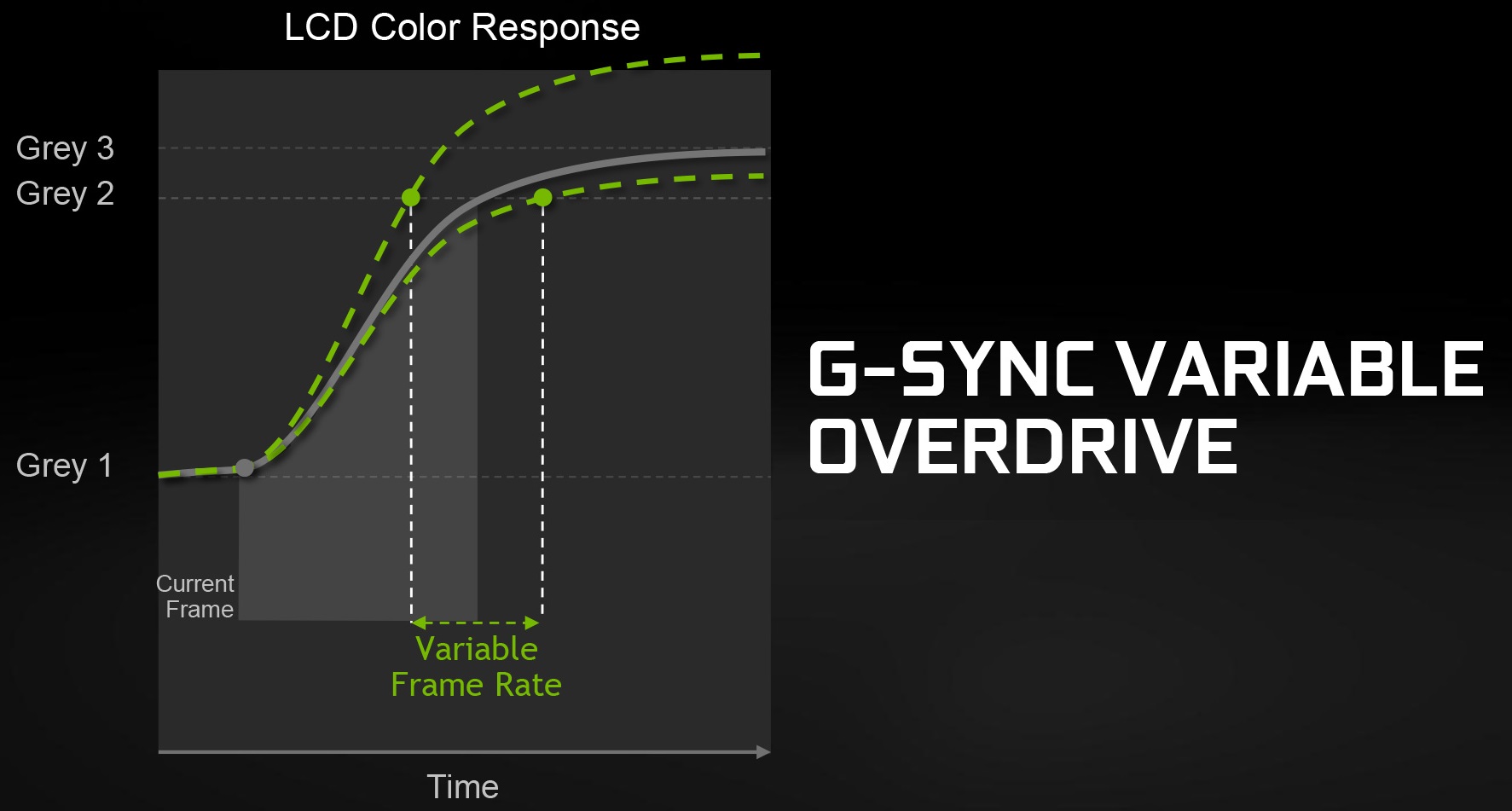 Obviously this is a tricky thing to tune and get right, and at the moment it seems FreeSync panels are getting there, but have not gotten the variabel refresh math nailed down just yet.

Some ASUS ROG Swift owners have reported an odd artifact related to overdrive. Where there is fast motion in a scene to the point where a range of pixels must change brightness dramatically from one frame to the next, the pixel sections experiencing those rapid changes also contain an artifact in the form of colored bands. One easily noticeable scenario is the muzzle flashes in an FPS. Since the muzzle flash was not present in the prior frame, pixels that are rapidly transitioning to white will tend to do so with alternating red-blue-green striping. In the above windmill blade shots you'll notice the absence of any 'rainbow effects' resulting from overdrive. These appear to be specific TN panel technology and have not presented in any IPS panels tested.

We confirmed that the MG279Q exhibits the same dot inversion related artifact that we have seen in other recent panels. Patterns that are the same color alternated every other pixel may cause visual banding or color change across that entire row of pixels. The test pages over at Techmind.org can be used to test your own display. Bear in mind that this test is supposed to only produce a flicker, not a complete change in color as the window is stretched horizontally wider across the display. Observe: 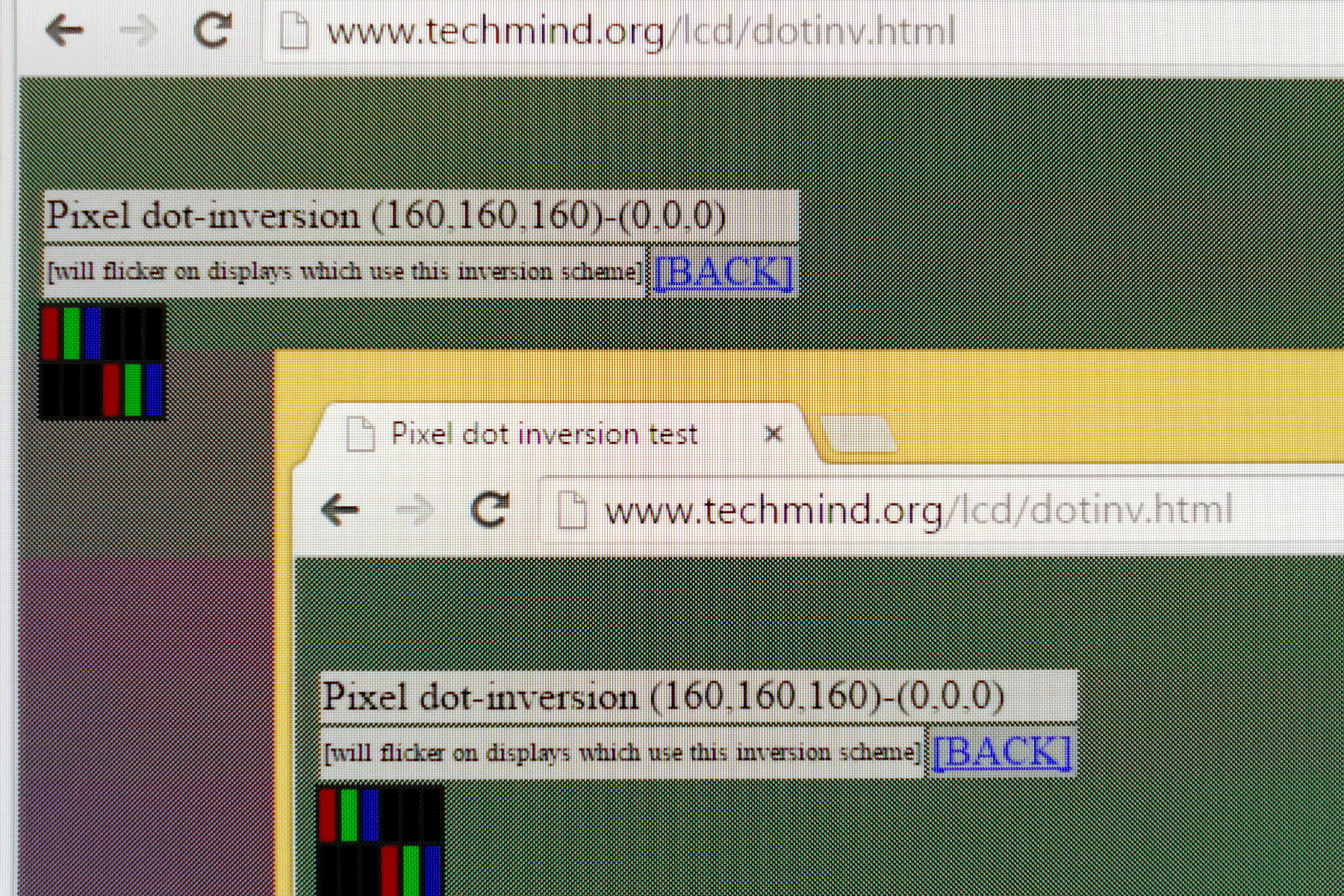 (The resized version of this image may appear 'odd' in your browser. Click to view an enlarged version)

The checkered pattern should appear grey in the above image, but here we can see that it has turned green where the pattern has been drawn on a wider portion of the screen.

It should be noted that this is a TCON (timing controller) issue. It is not specific to FreeSync or G-Sync and seems to be the most apparent in the TCON design that drives 2560×1440 LCD panels. We noted this issue presents identically in the following displays:

This is not an all inclusive list, as we only sampled a few displays from around the office, but many panels have a hard time with this test. Even the high end ASUS PQ321Q 31.5" 4K LCD exhibits it to some degree (though in a different manner than the 1440P panels listed above).

While this may seem to be a significant issue, it is limited to that specific type of pattern being drawn. We never saw this effect present itself in typical desktop or gaming usage.