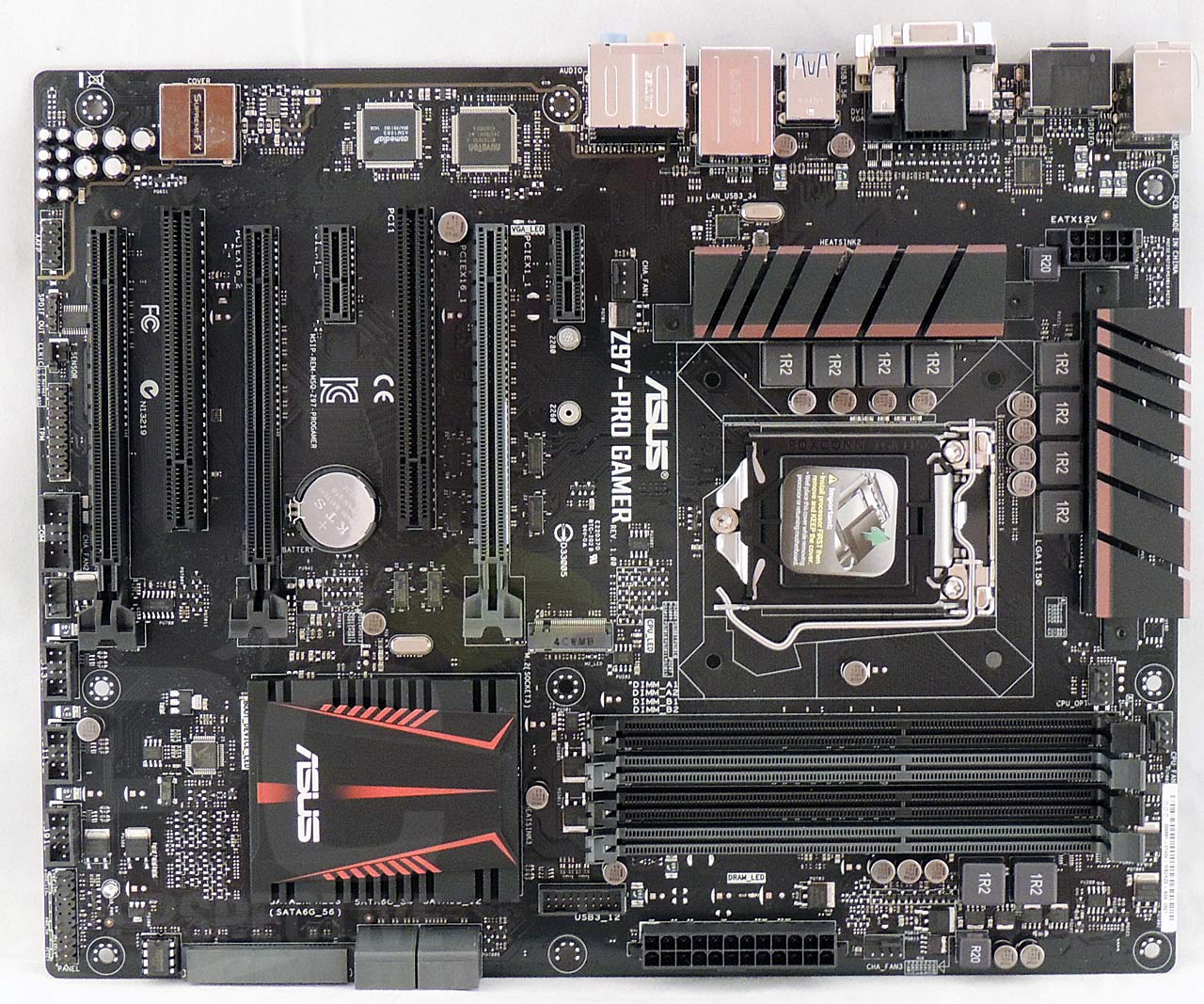 ASUS designed with Z97-Pro Gamer with a gamer appealing black and red aesthetic, a black PCB and black colored PCI-Express x16 slots, DIMM slots, and SATA ports with red highlights on the VRM and chipset heat sinks. Additionally, the audio PCB divider line glows red when powered, making for a nice effect in-line with the board's color scheme. ASUS designed the board with a clean look and more than enough room between components for easy use and access. 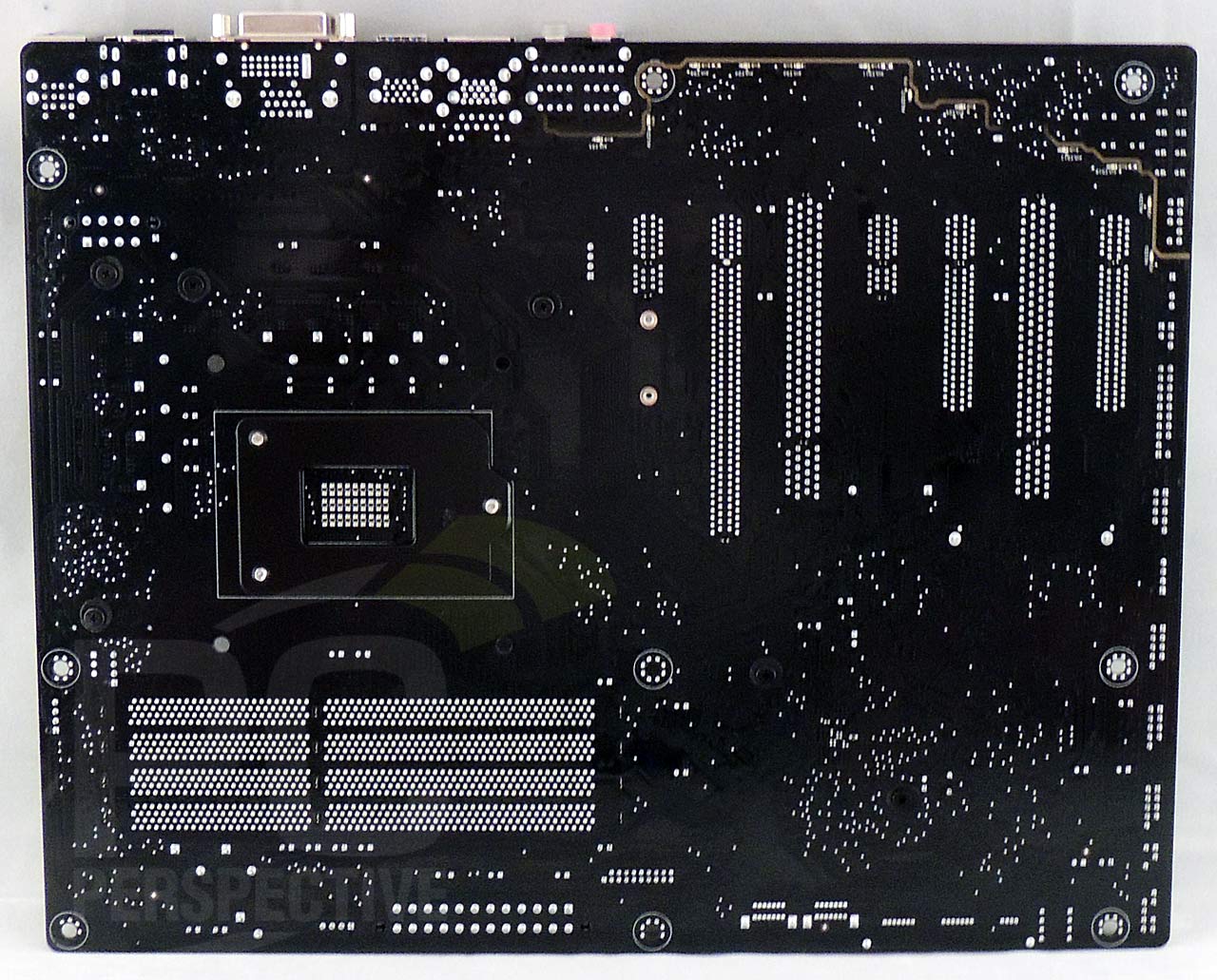 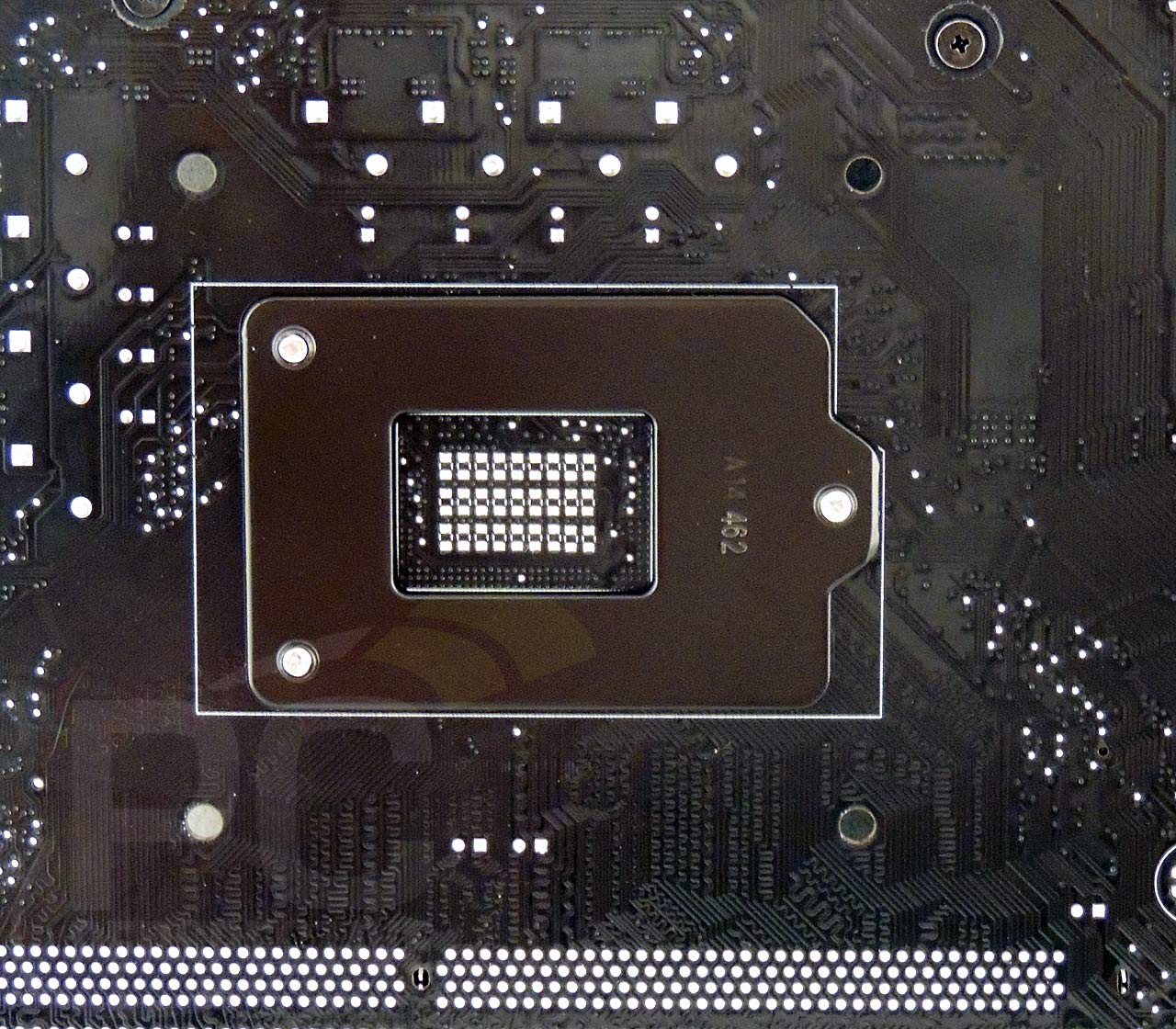 Aside from the normal traces and solder joints, the back of the board is completely devoid of any components or chips, minimize the possibility of board damage during install or use. The area behind the CPU socket is completely component-free, with no risk of damaging the board using your favorite CPU cooler with the board. 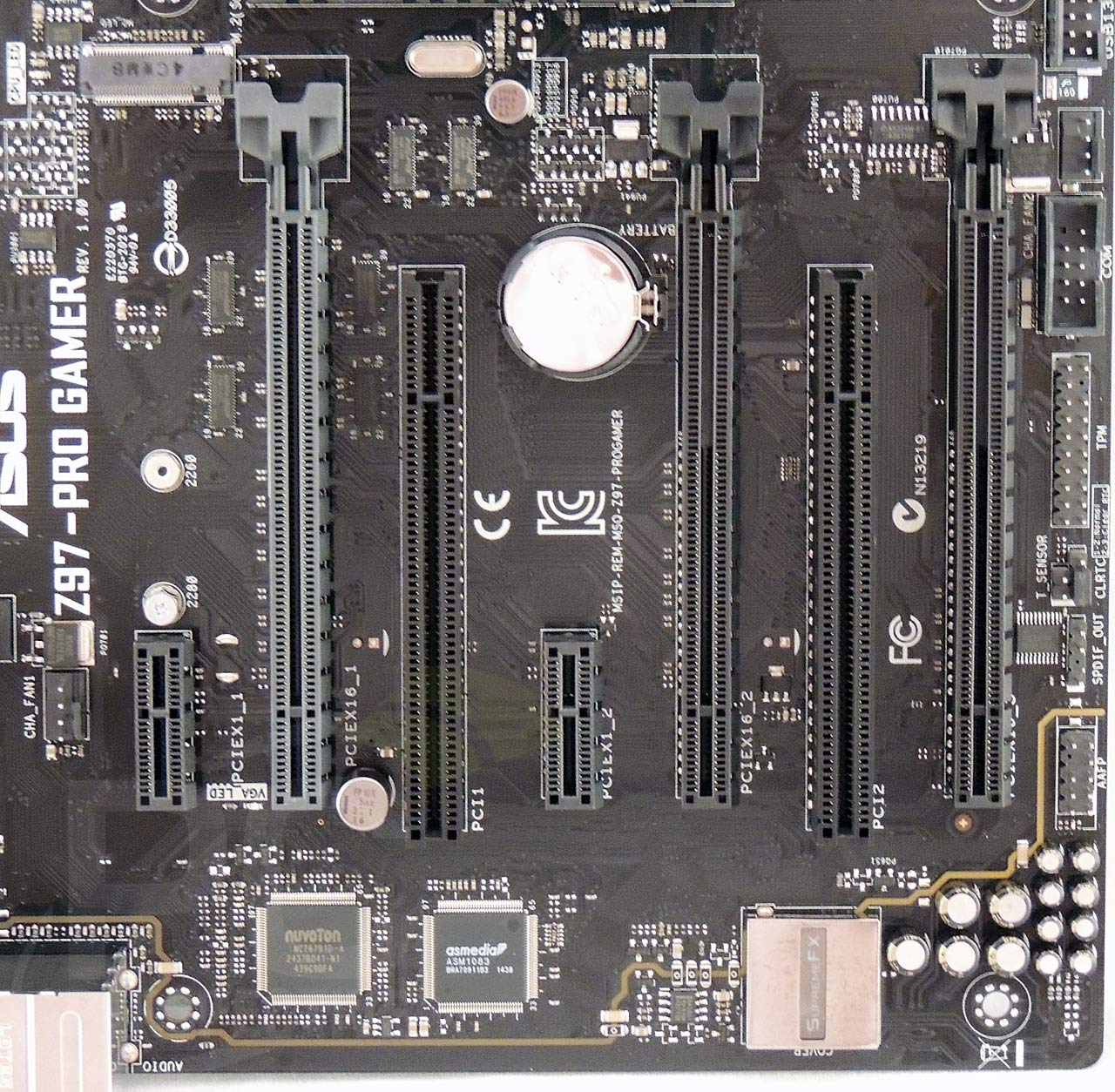 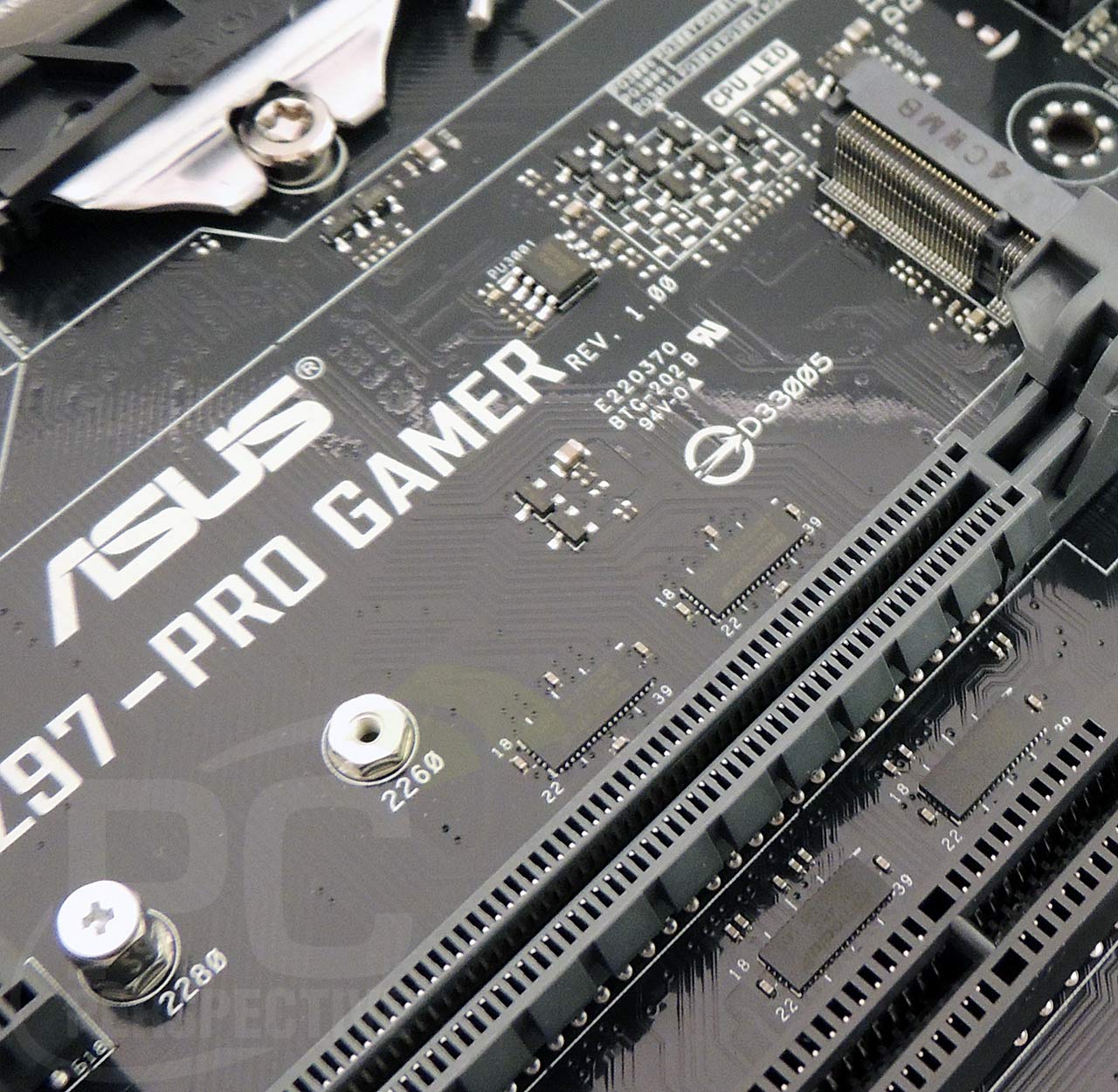 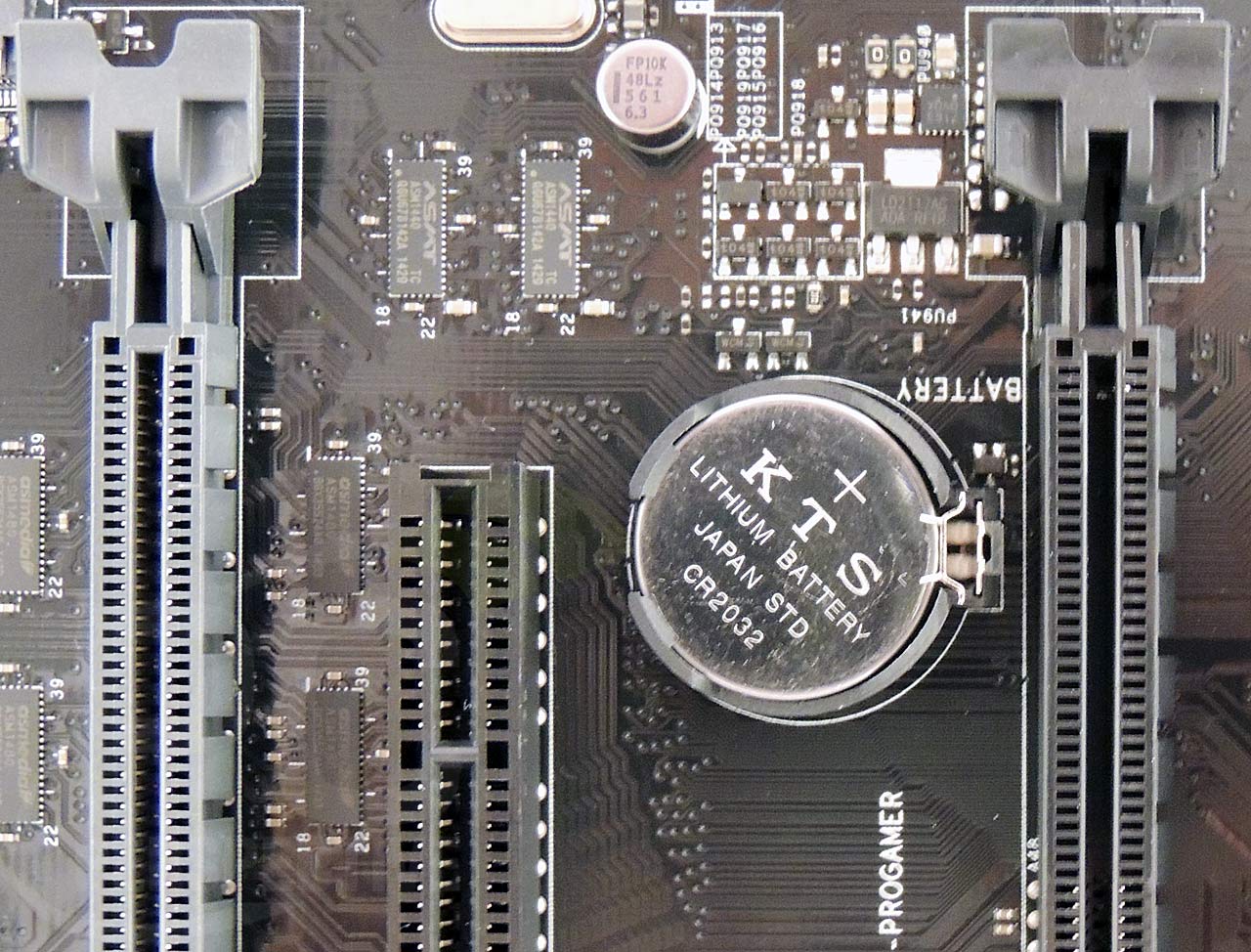 The integrated M.2 slot is located just below the primary PCIe x1 slot. The slot supports both SATA 6G and PCIe type devices, as well as M.2 cards up to 80mm in length. The CMOS battery is located to the lower right of the secondary PCIe x16 slot.

ASUS integrated the latest version of their SupremeFX audio subsystem into the Z97-Pro Gamer, placing the audio components on a physically separate PCB to minimize noise and crosstalk from other integrated components. The PCB separation line glows red when the board is actively powered. The front panel audio header is located just below the audio subsystem's capacitor bank in the upper left corner of the board. 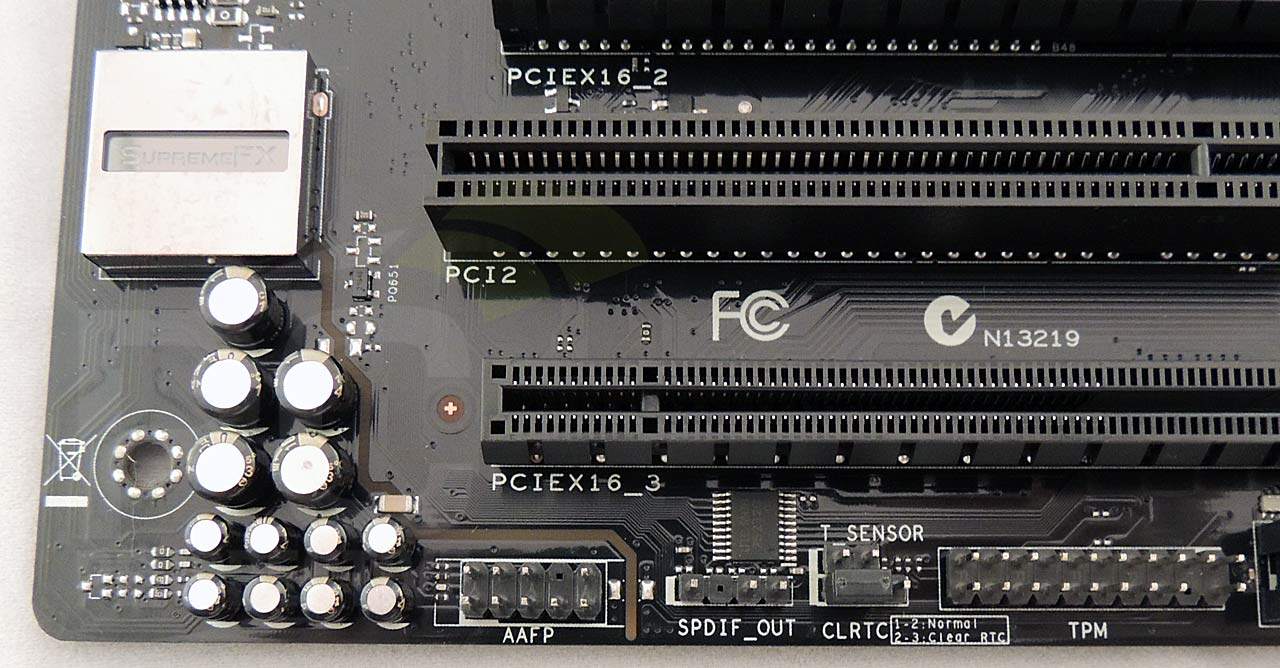 In the upper left corner of the board are the the front panel audio header, and S/PDIF output header, the CMOS clear jumper, a temperature sensor header, and a trusted platform module header.

Along the lower left of the tertiary PCI-Express x16 slot are the serial port header, a 4-pin system fan header, and the USB 2.0 headers.

The USB 2.0 headers and the front panel header are located in the lower left corner of the board. 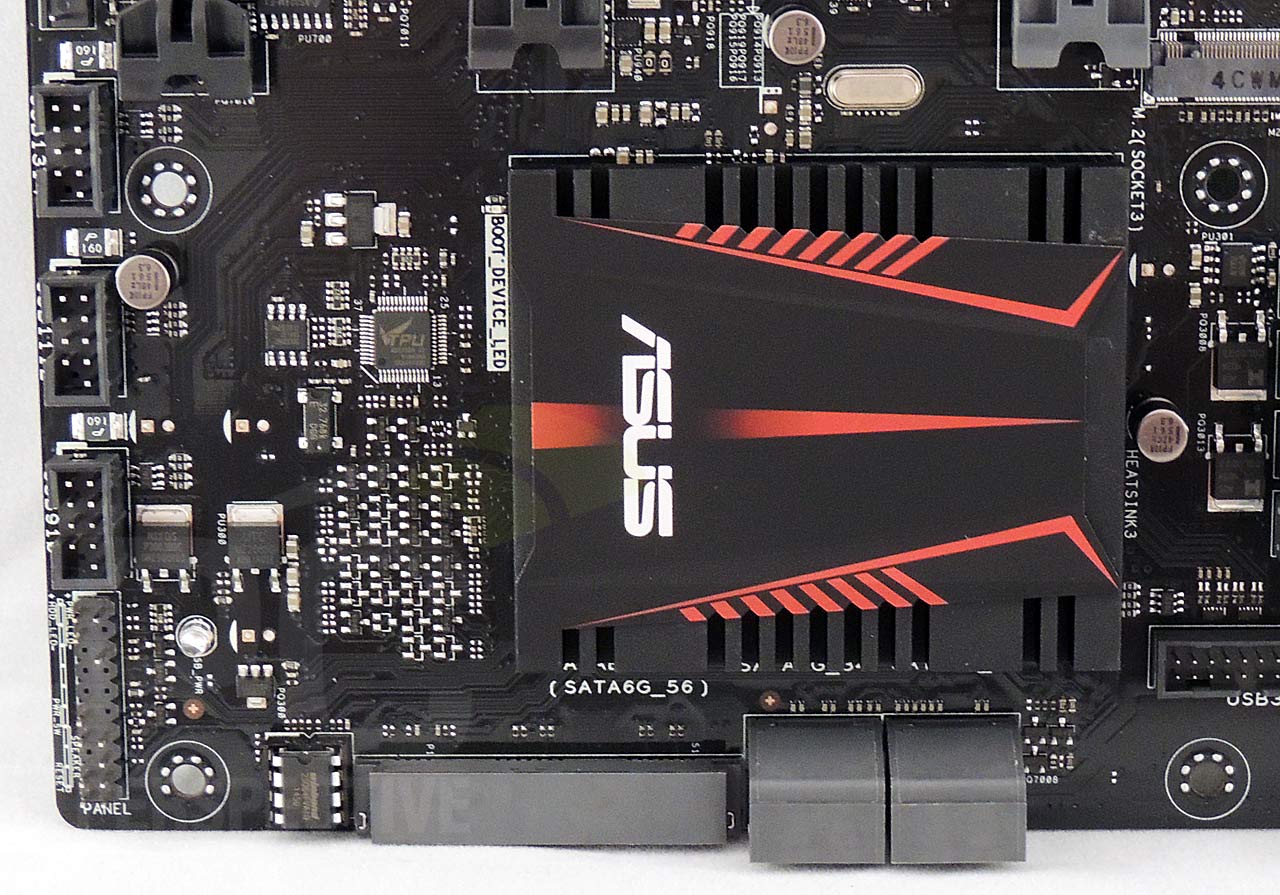 The Intel Z97 Express chipset is covered by a large aluminum, low profile heat sink just below the PCIe x16 slots. The heat sink is flat black in color with red highlights and an ASUS logo.

ASUS includes a total of four on-board SATA 6Gb/s ports and one SATA-Express 10 Gb/s port located just under the chipset cooler. All ports are controlled by the Intel Z97 chipset controller. 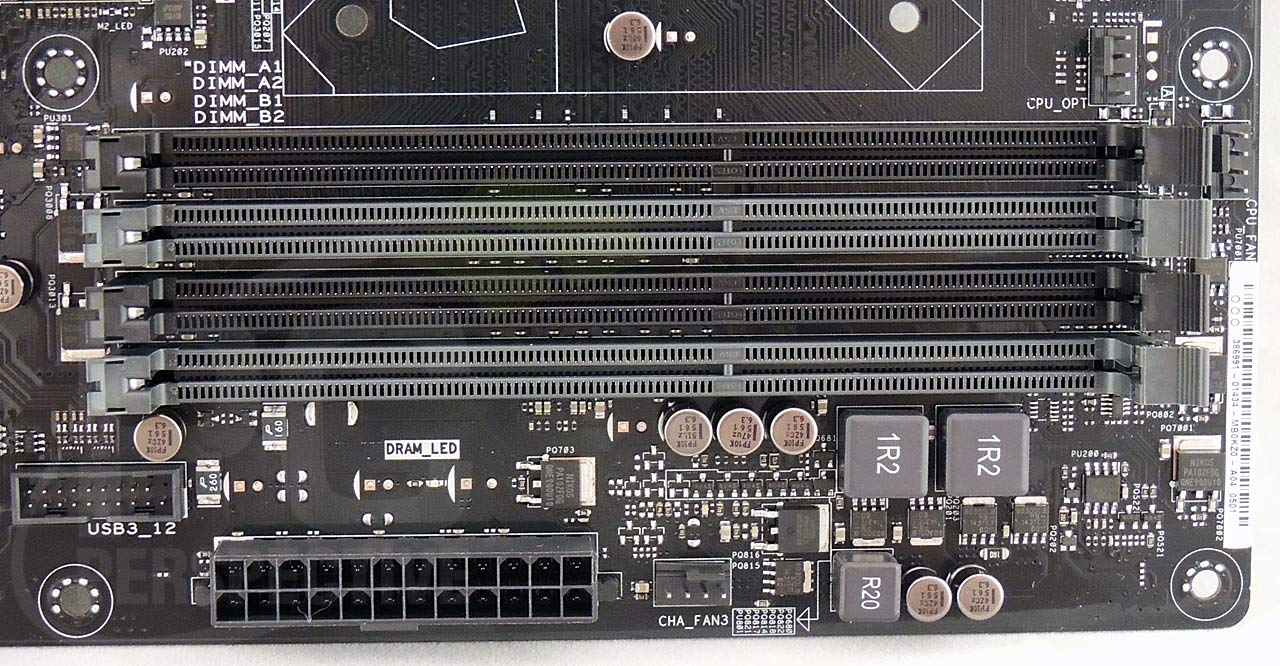 The on-board DDR3 memory slots are located just below the CPU socket in the lower right section of the board. Dual Channel memory mode is enabled by seating memory modules in like colored slots with slots 2 and 4 (the grey colored slots) being the primary memory slots. The board supports up to 32GB of memory running at a maximum speed of 3200MHz. Note that memory speeds above 1600MHz are considered overclocked speeds and are outside of the official Intel stock memory speed specifications. To the lower left of the memory slots are the Intel Z97 chipset controlled USB 3.0 header, and the 24-pin ATX power connector. 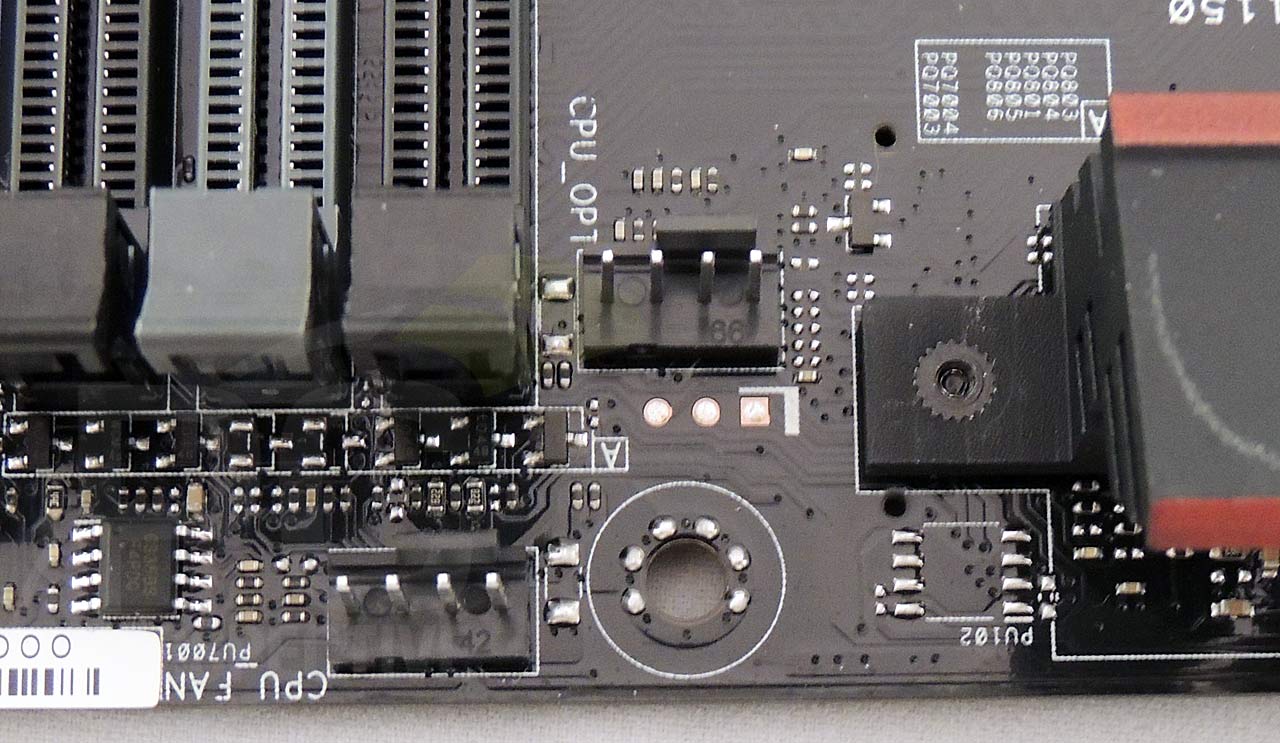 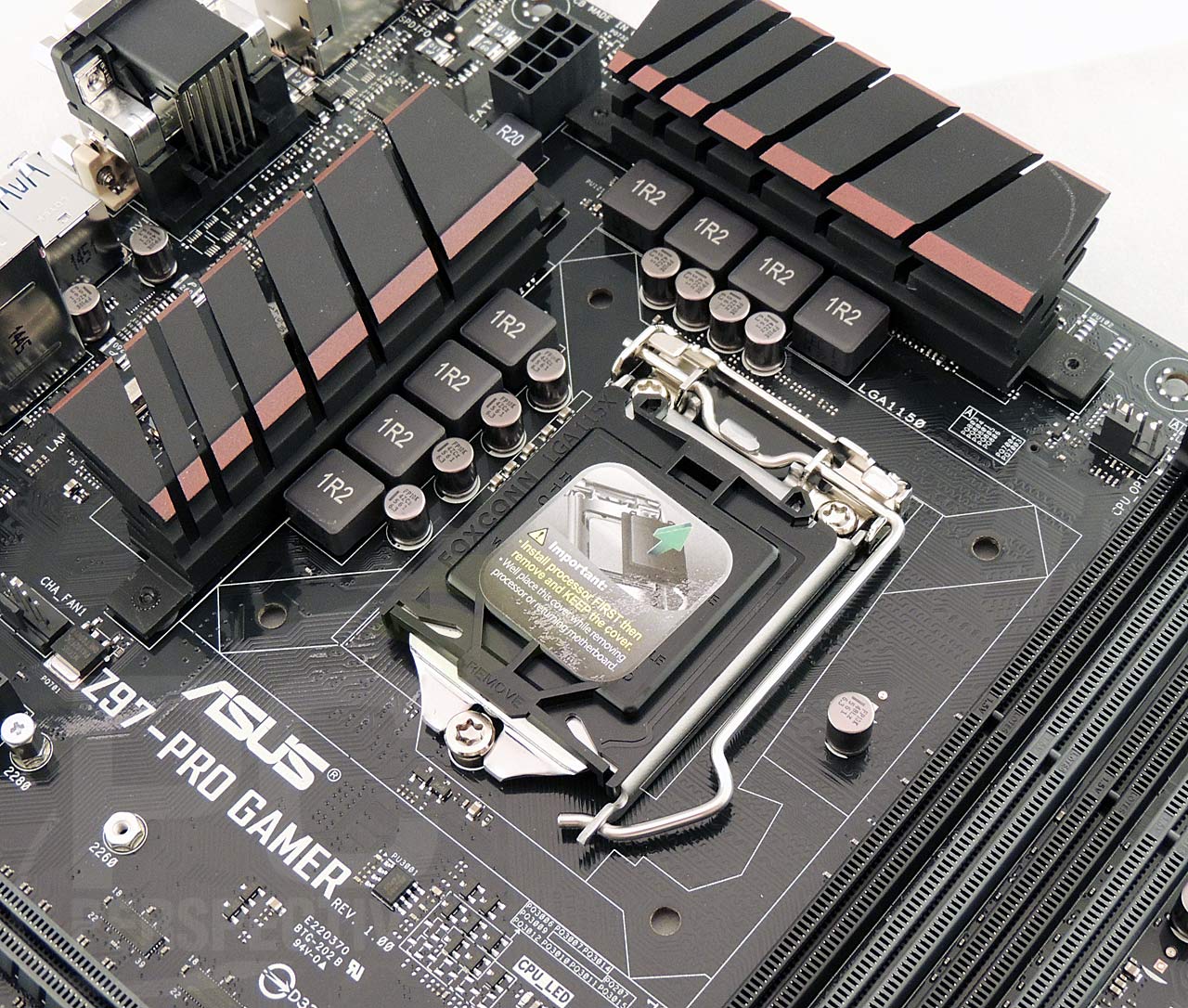 The CPU socket is clear of obstructions with the power circuitry and VRM hybrid cooler located above and to the right of the socket. The VRM coolers are simple passive heat sinks designed for maximum compatibility with CPU coolers. ASUS designed the area around the socket carefully to avoid unnecessary obstructions with lower profile components used for those in close proximity to the socket. 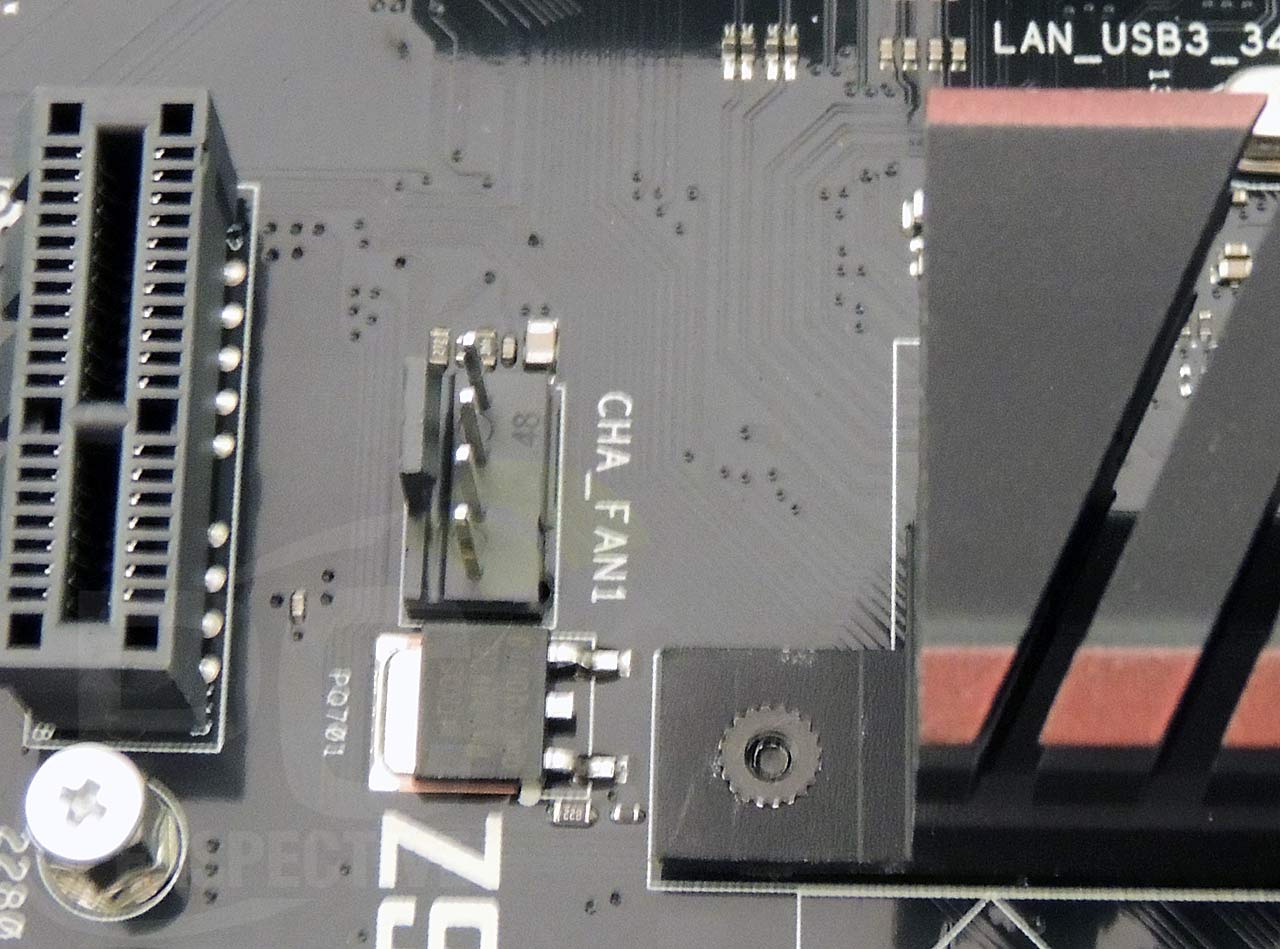 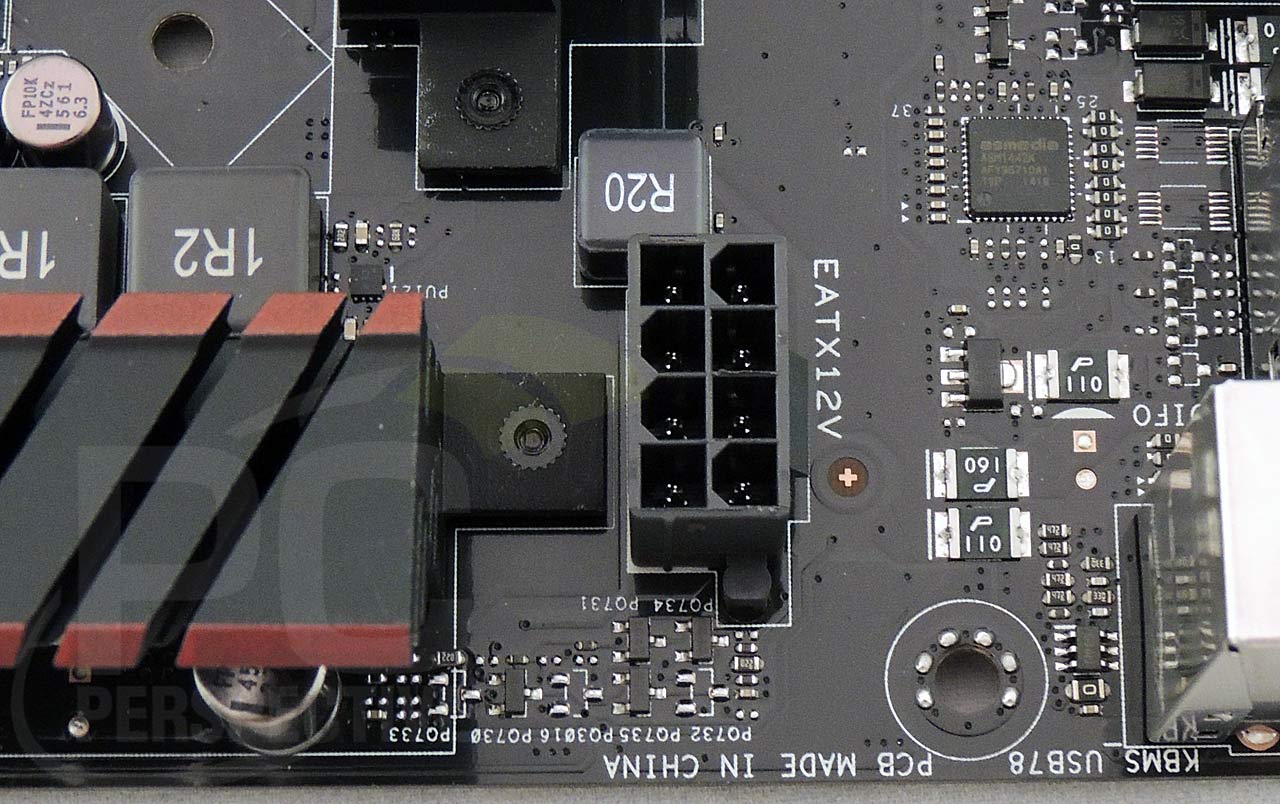 The integrated 8-pin ATX12V power connector is located to the upper left of the CPU socket, in between the two VRM heat sinks.