Much of the hype and excitement about the launch of the AMD Fury X was lifted last week. At the E3 conference, the company officially showed the card for the first time and, before that, several leaks had conspired to really give us a nearly completely picture of the flagship AMD graphics card before today's review. Still, the design that AMD and its engineering team have implemented is excellent. Though everyone's opinion and style differs, I think you'd be crazy not to think that the Fury X is an improvement over anything AMD has done in the past. 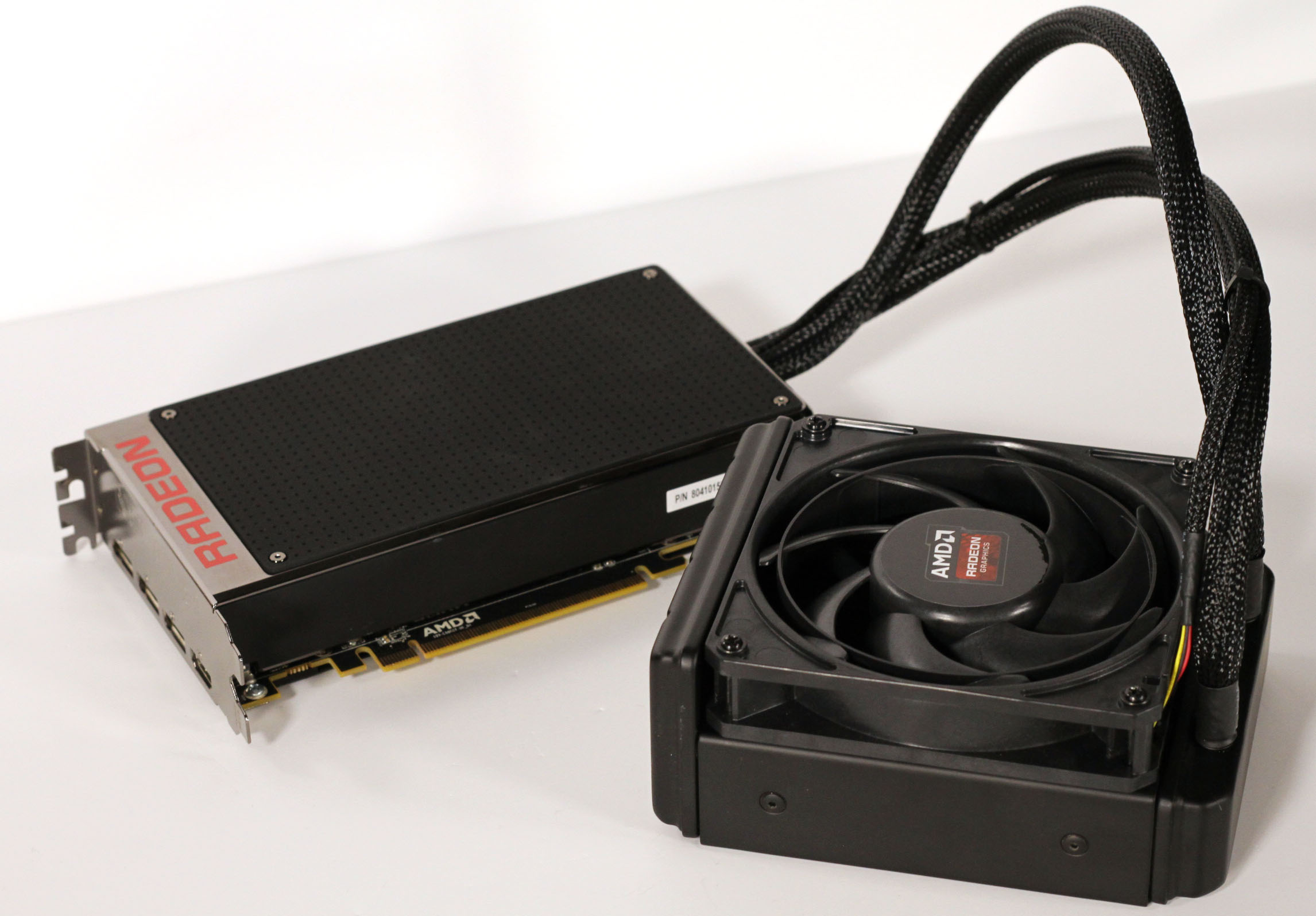 Two things stand out immediately if this is your first time looking at the AMD Radeon R9 Fury X graphics card. First, it's small. Second, it has a water cooler.

AMD has gone with a self contained water cooler for the design on the Fury X, a decision made likely due to power consumption and thermal constraints, but one that pays dividends in other areas. The radiator is a 120mm mount, but it is thicker than the standard "single" cooler you see used on CPUs. The fan is incredibly quiet in my testing and is actually inset some on the radiator design, making the fan and rad combination appear as a single unit.

The tubing from the card to the rad is sleeved and actually pretty long, allowing for more options when it comes time to install the card in your system. Because you will require a spot to mount the 120mm radiator and fan, you should be able to reach the top of your case, the standard back exhaust location and probably even the front intake as well. For users that already have (or plan to use) a self-contained cooler for the CPU in their rig, you will have to find a second location for the Fury X cooler. It's definitely an extra step for installation, but users that are buying a $650 graphics card will likely be more than willing to go the extra step for the card they fall in love with. 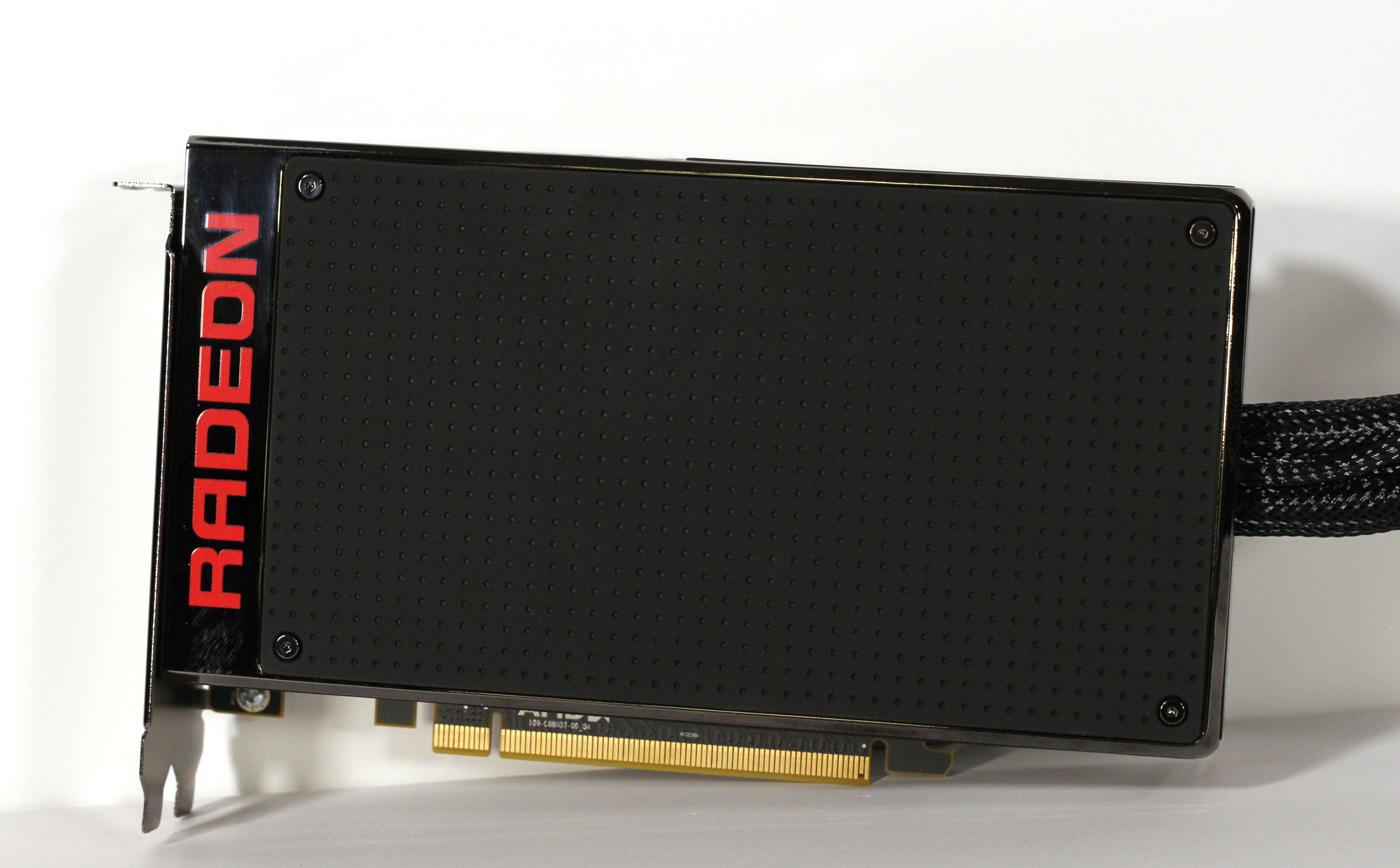 The second thing I mentioned above was size: the card and its PCB itself are quite small. Measuring about 6.5-inches long, the Fury X is four full inches shorter than the GeForce GTX 980 Ti. Of course, you have to include the radiator as part of the design, so that's not completely accurate but it helps when comparing the technical capability of design.

From a build quality stand point, the R9 Fury X is, again, a huge step beyond anything AMD has done before. Built out of several pieces of aluminum and then being coated in a soft-touch plastic in many areas, the card looks both elegant and high tech. It doesn't have the sharp lines and angles that would insinuate aggression, a trope that many enthusiast companies adhere to, and I can really appreciate it. It's clean, understated, and above all else, unique. You aren't going to mistake this card for a Radeon R9 290, that's for sure. 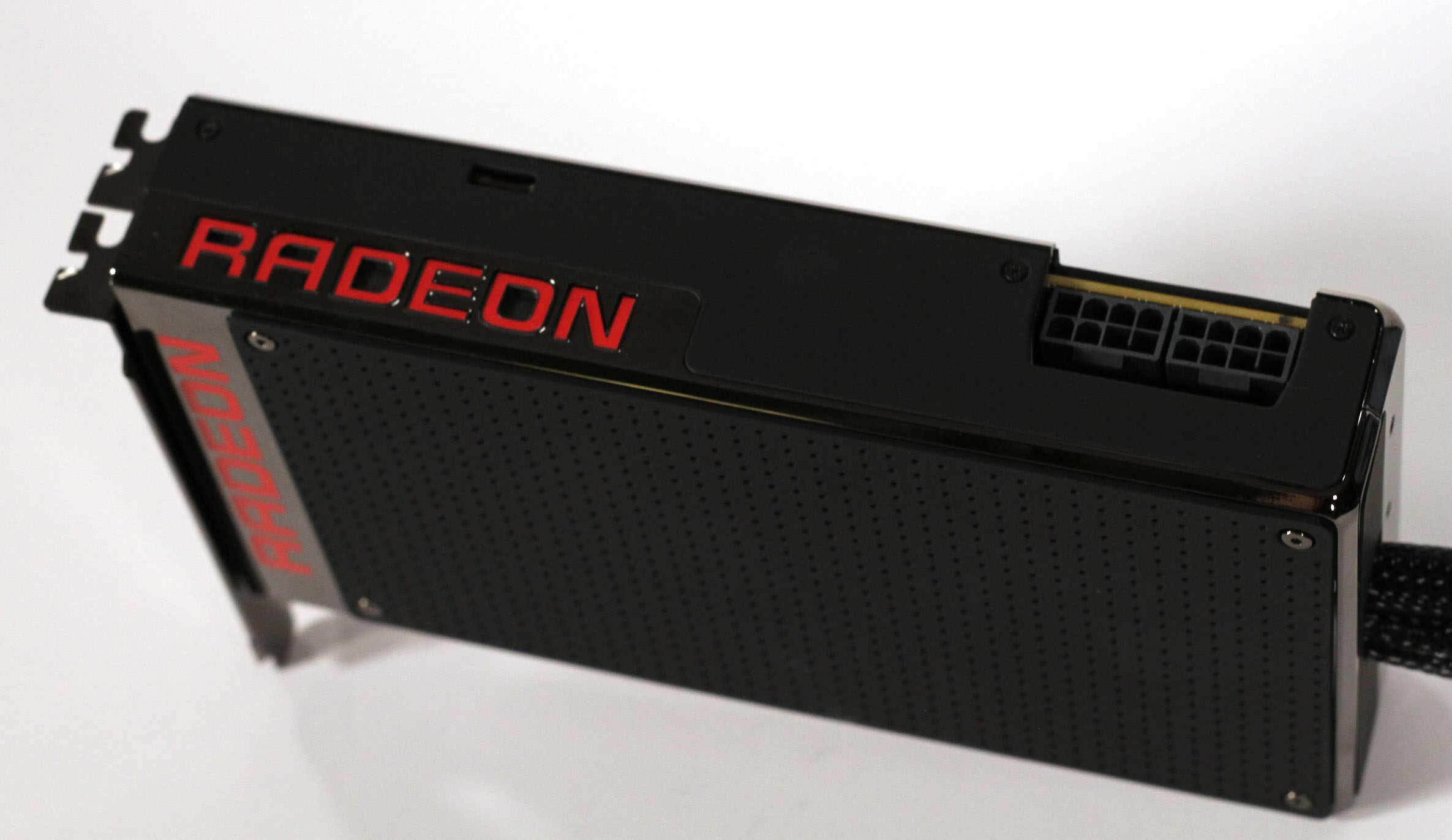 The Radeon logo up top illuminates in a bright red and will stand out immediately in any case with a side window. A pair of 8-pin power connectors is visible up top.

Right above the "E" in Radeon there is an opening that has a single dipswitch used to change between the default VBIOS and a write-protected BIOS in case you… well, screw it all up. There are no other changes other than that though so don't expect any kind of "uber" mode or high voltage settings when moving that switch around. 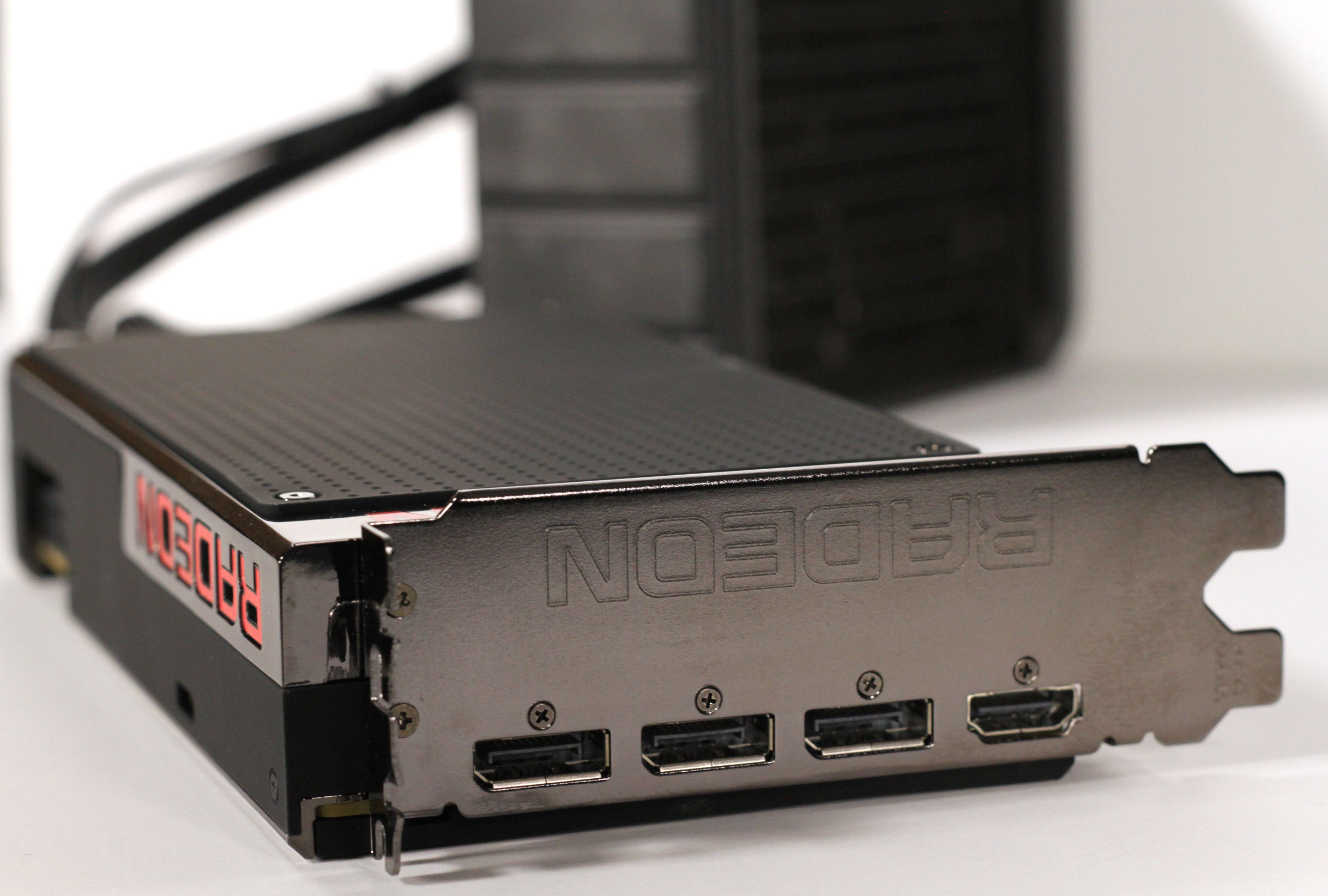 Display connectivity requires some attention. The Fury X includes three full-size DisplayPort 1.2a connections and a single HDMI 1.4a port.  That's right, not HDMI 2.0. That's a big let down in my eyes as being able to support HDMI 2.0 and the 4K / 60 Hz resolutions that many TVs are shipping with today means the Fury X is not going to be ideal for a home theater PC for gamers. Sure, you can still run HDMI 1.4a and get 30 Hz on 4K resolution panels (no thanks) or run with 1080p / 60 Hz, and that might be enough for many users' current TV setup. As Fury X sells through 2015 though it might become a stronger knock against the Fiji GPU.

Also worth noting: there are no DVI ports on this card! Be prepared to use those HDMI to DVI  adaptors for 1080p monitors or getting a DisplayPort to dual-link DVI adapter for those of you with 2560×1600 / 2560×1440 legacy monitors. 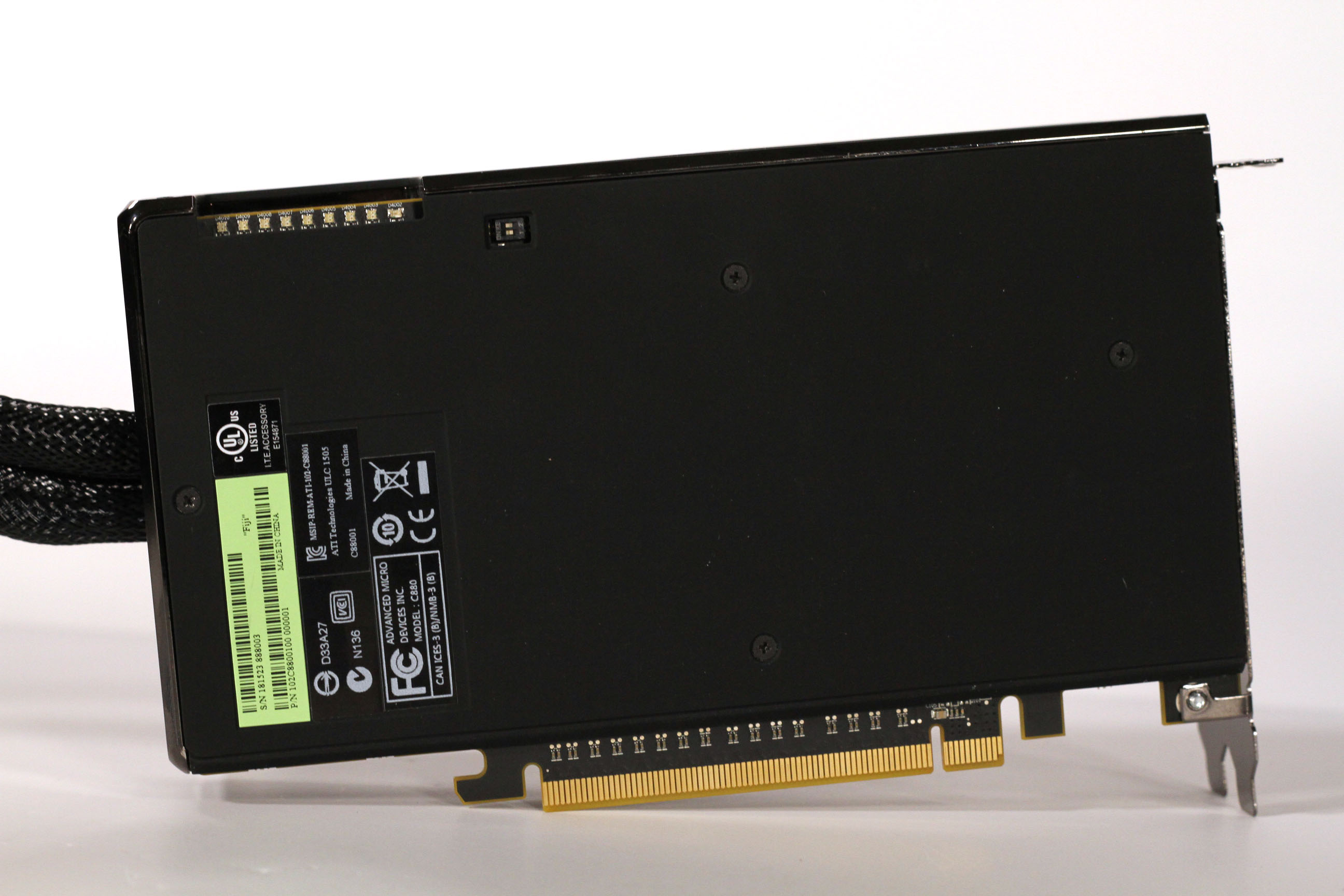 The back of the Fury X is covered by a back plate with a lining of soft-touch plastic. It would have been nice to see some kind of design on this section for windowed PCs but I am sure most gamers are just glad to see AMD included the plate at all. 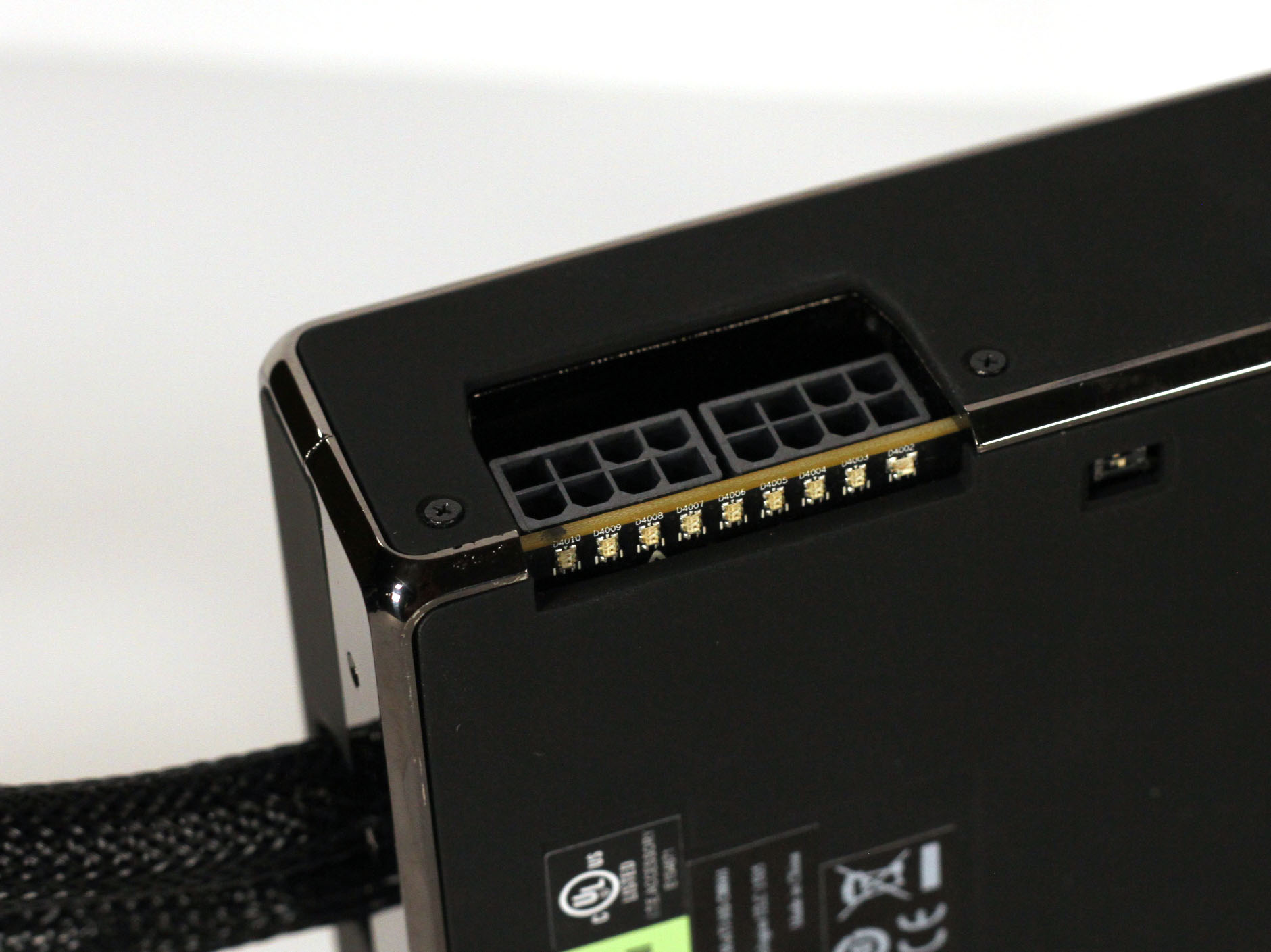 Let's look again at the pair of 8-pin power connectors on the Fury X. Even though the card has a TDP of just 275 watts, the power connections can support 375 watts without breaking specification so users, in theory at least, have a lot of headroom for overclocking and power draw. Overclocking wasn't very successful in my tests though, so I am not sure how that advantage will pan out.

Under the power connections are a set of LED lights that are used to indicate the GPU load, dubbed GPU Tach by AMD. The more load the GPU is under, the more lights will illuminate. In my testing though, only during level loading did they start to drop below full usage. The lights can actually be either red, blue or red and blue, depending on your selection on the two smaller dipswitches on the right hand side. One singular light will illuminate green when the card enters ZeroPower mode – idle at Windows. 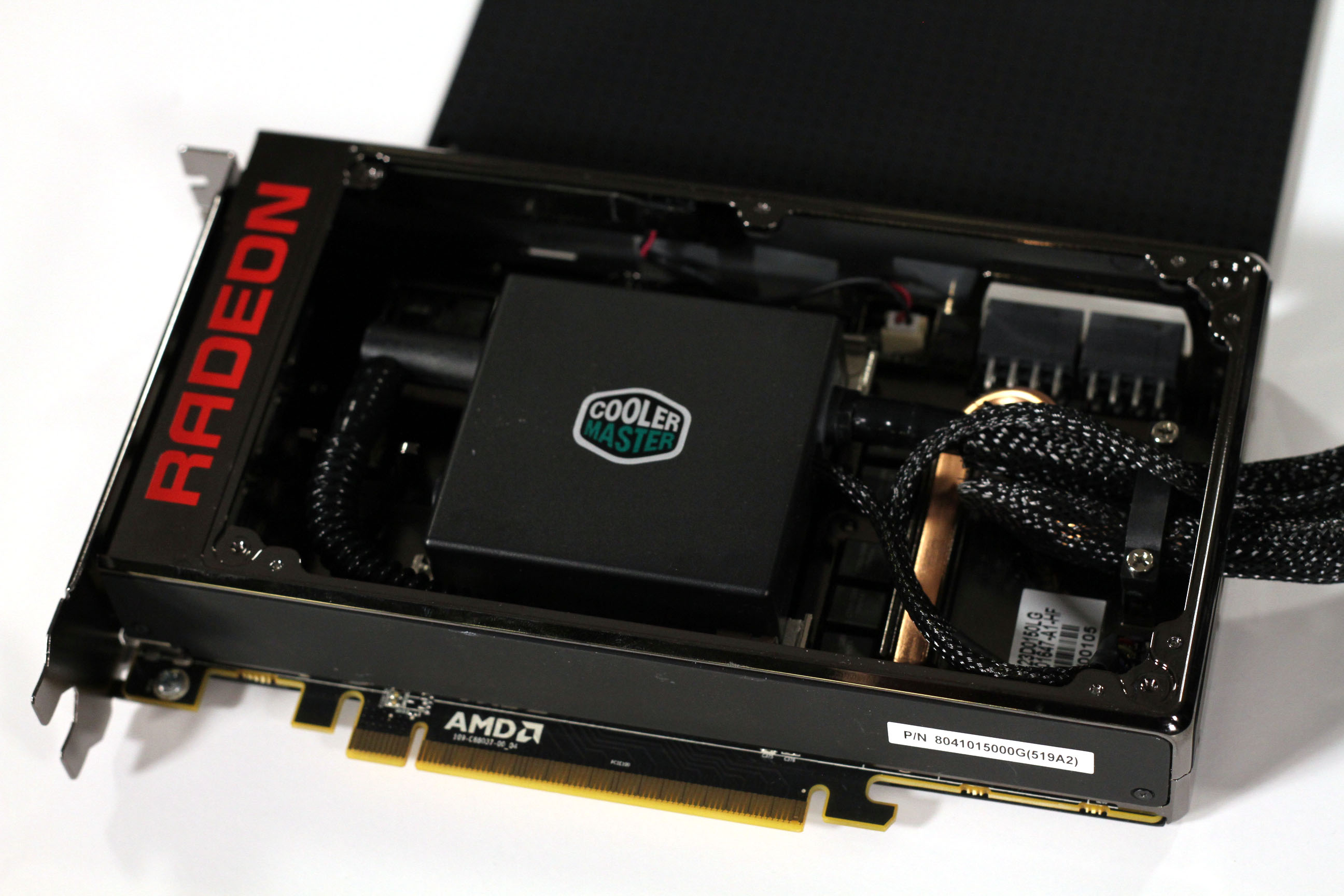 The top cover of the Fury X can be removed to reveal the cooling inside, powered by Cooler Master. This water cooler is not just cooling the GPU ASIC itself – both the memory, which is co-resident with the GPU on the interposer setup, and the VRM hardware is being cooled by water as well. This is why AMD can get away with not having any air heatsink at all on the card itself, unlike the Radeon R9 295X2 from last generation that needed both the water cooler and an on-board fan.

I know opinions will differ on the overall design of the Fury X, but I came away from this story really liking the industrial design, the build quality, and even the little touches like the GPU Tach and soft touch plastic insets. But enough about how it looks, how does it perform?