A substantial upgrade for Thunderbolt

Thunderbolt 3 is more than just a speed upgrade. This time Intel has added support for USB 3.1 and the new USB-C connector!

Today at Computex, Intel took the wraps off of the latest iteration of Thunderbolt, a technology that I am guessing many of you thought was dead in the water. It turns out that's not the case, and this new set of features that Thunderbolt 3 offers may in fact push it over the crest and give it the momentum needed to become a useable and widespread standard.

First, Thunderbolt 3 starts with a new piece of silicon, code named Alpine Ridge. Not only does Alpine Ridge increase the available Thunderbolt bandwidth to 40 Gbps but it also adds a native USB 3.1 host controller on the chip itself. And, as mobile users will be glad to see, Intel is going to start utilizing the new USB Type-C (USB-C) connector as the standard port rather than mini DisplayPort. 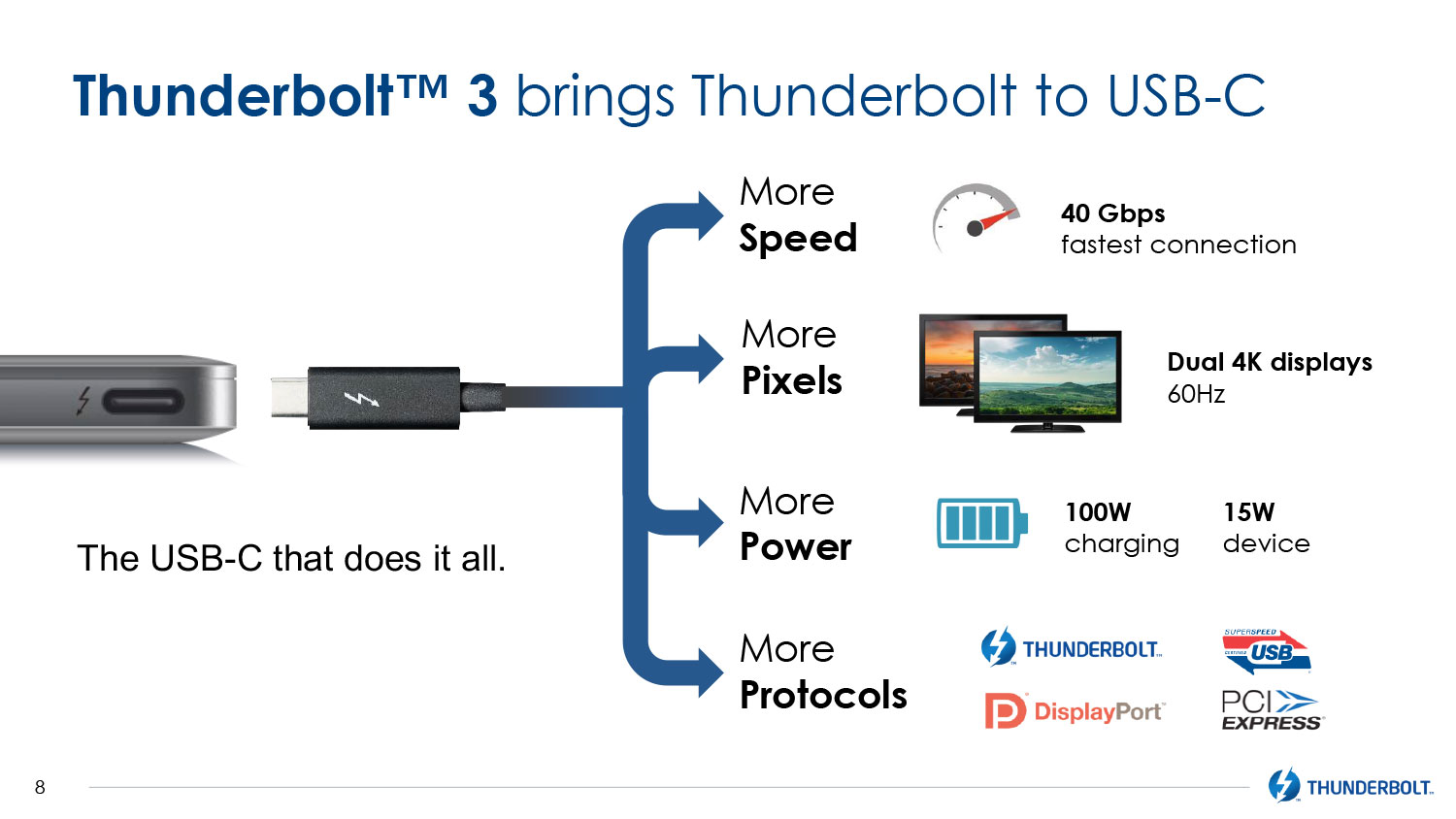 This new connector type, that was already a favorite among PC Perspective staff because of its size and its reversibility, will now be the way connectivity and speed increases this generation with Thunderbolt. This slide does a good job of summarizing the key take away from the TB3 announcement: 40 Gbps, support for two 4K 60 Hz displays, 100 watt (bi-directional) charging capability, 15 watt device power and support for four protocols including Thunderbolt, DisplayPort, USB and PCI Express. 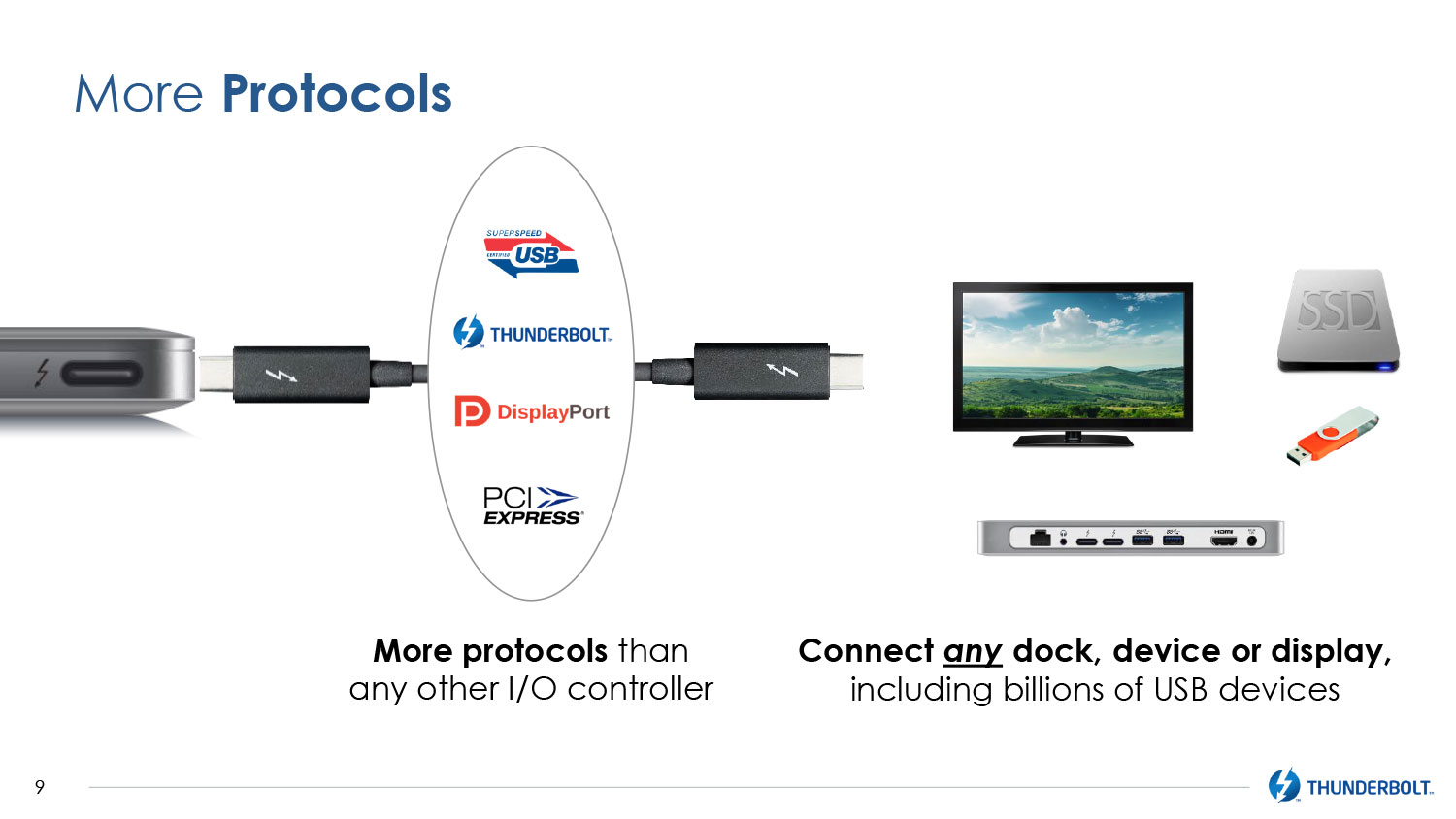 Protocol support is important and Thunderbolt 3 over USB-C will be able to connect directly to a DisplayPort monitor, to an external USB 3.1 storage drive, an old thumb drive or a new Thunderbolt 3 docking station. This is truly unrivaled flexibility from a single connector. The USB 3.1 controller is backward compatible as well: feel free to connect any USB device to it that you can adapt to the Type-C connection. 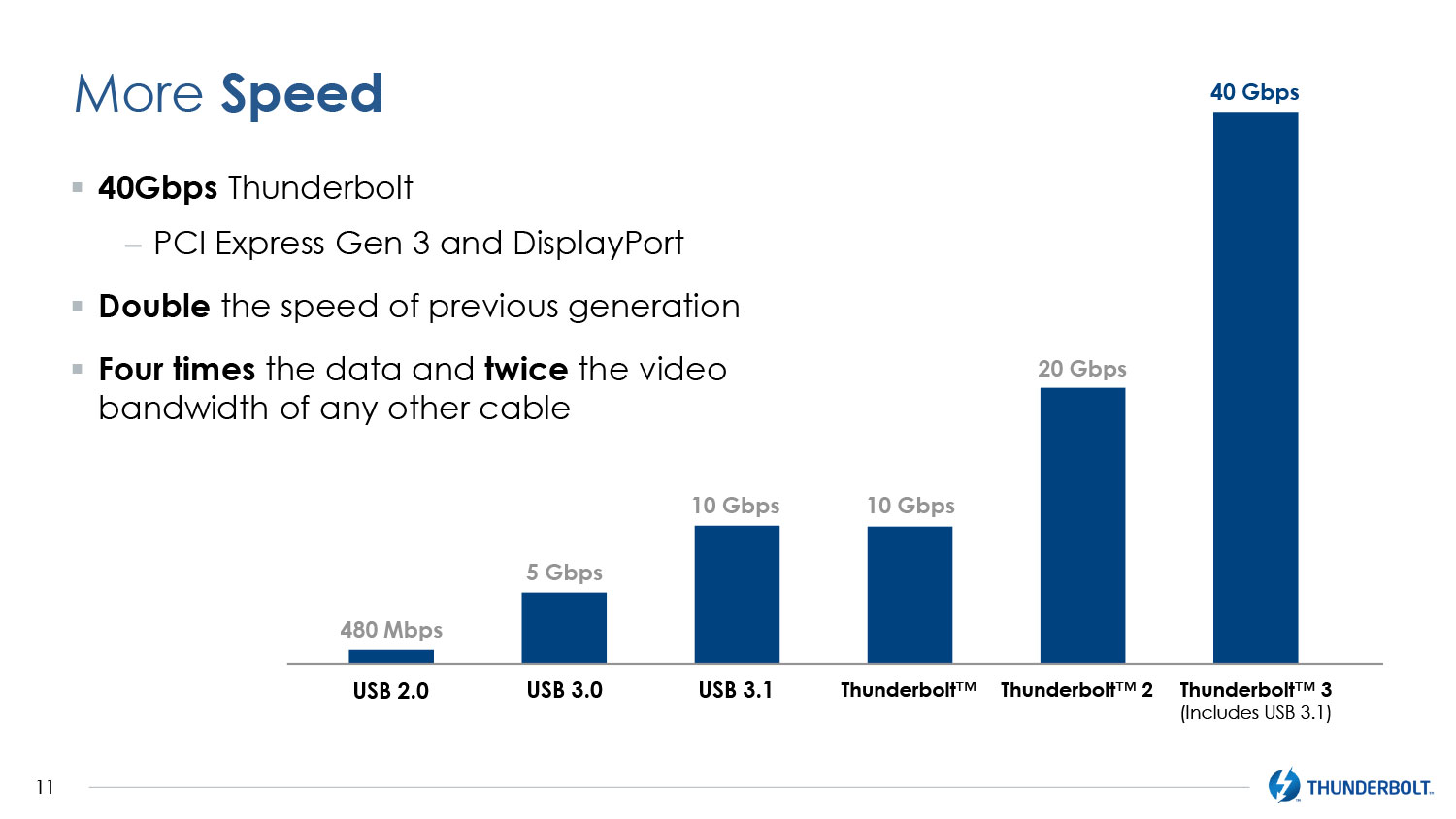 From a raw performance perspective Thunderbolt 3 offers a total of 40 Gbps of bi-directional bandwidth, twice that of Thunderbolt 2 and 4x what we get with USB 3.1. That offers users the ability to combine many different devices, multiple displays and network connections and have plenty of headroom. 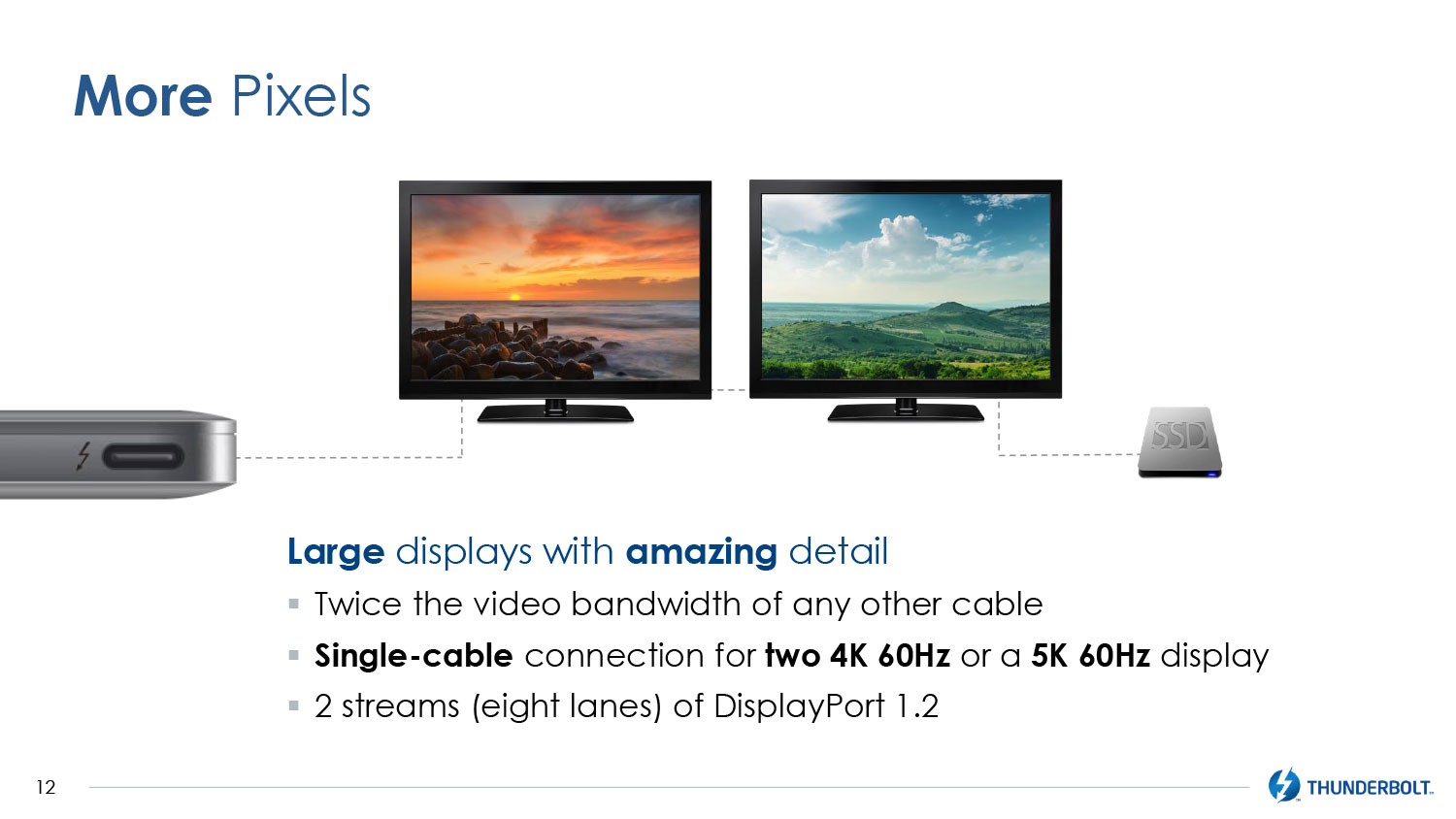 With Thunderbolt 3 you get twice as much raw video bandwidth, two DP 1.2 streams, allowing you to run not just a single 4K display at 60 Hz but two of them, all over a single TB3 cable. If you want to connect a 5K display though, you will be limited to just one of them. 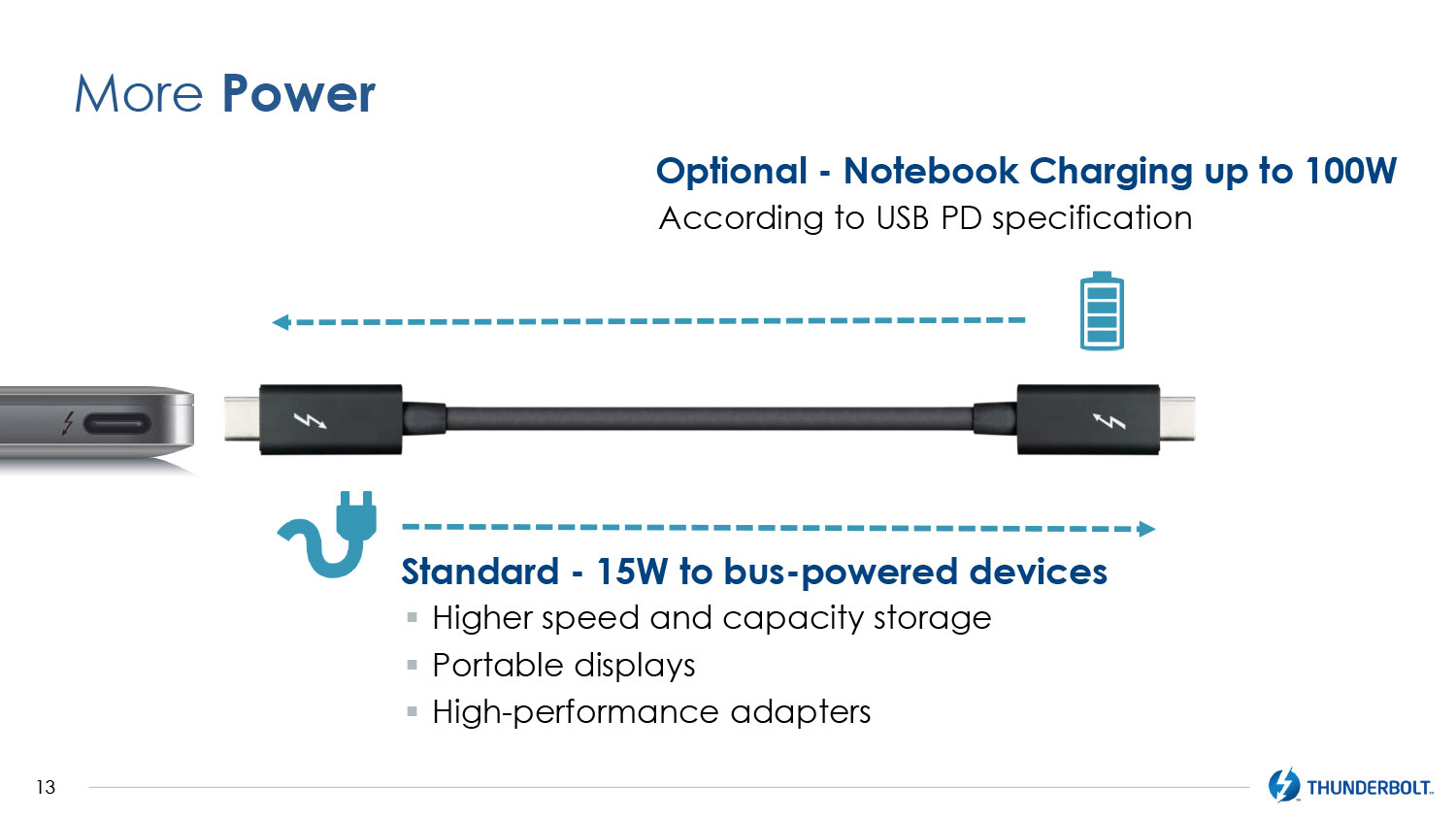 For mobile users, which I think is the area where Thunderbolt 3 will be the most effective, the addition of USB 3.1 allows for charging capability up to 100 watts. This is in addition to the 15 watts of power that Thunderbolt provides to devices directly – think external storage, small hubs/docks, etc. 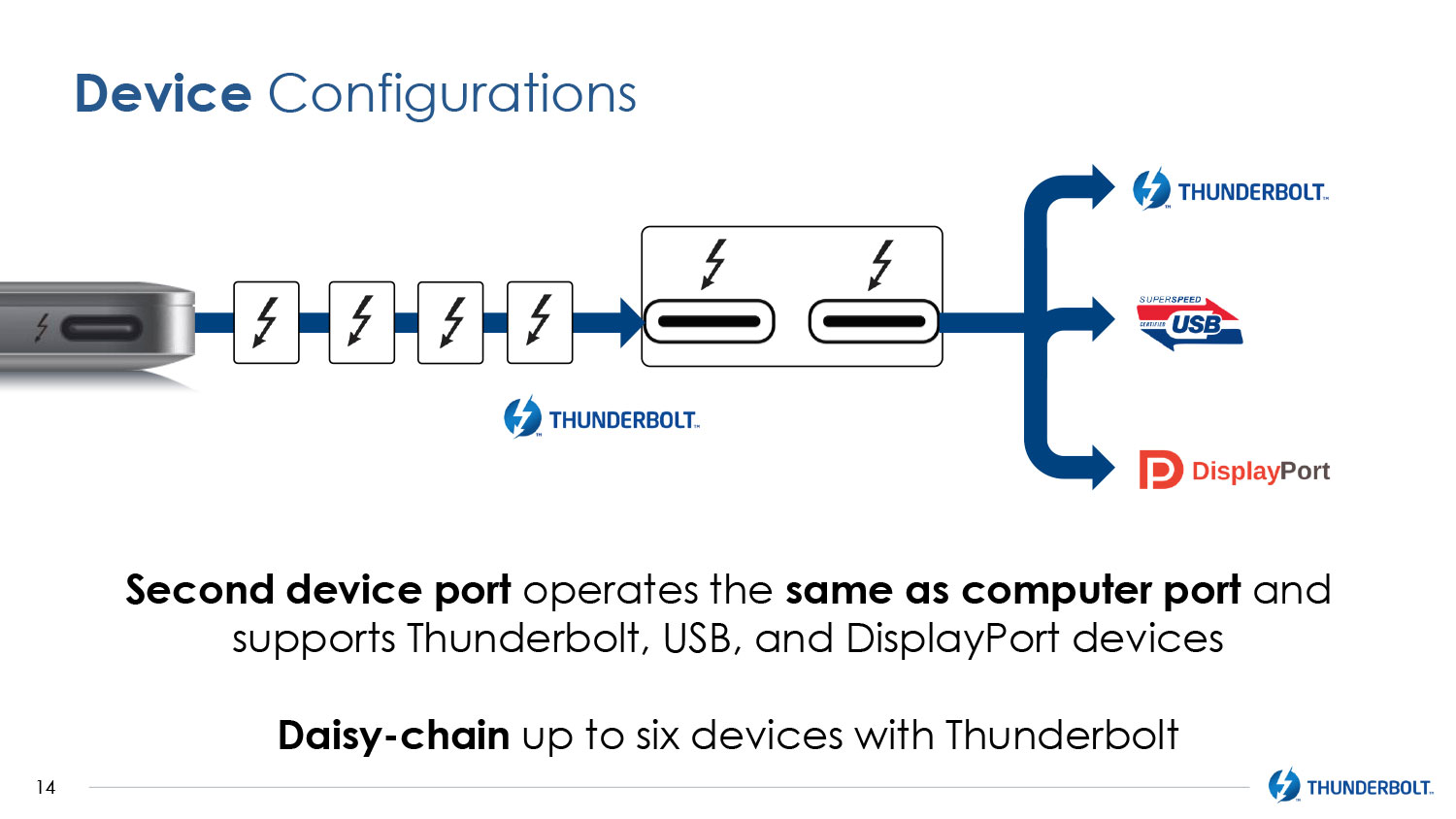 That protocol capability will extend to the other devices as well in the Thunderbolt chain as long as they are integrating Intel's Alpine Ridge controller. This means if you buy a monitor with a USB-C Thunderbolt 3 pass through connection then you will have the ability to connect a USB device, a DisplayPort device or another Thunderbolt device to it. Connecting a USB 3.1 SSD to a monitor would actually utilize the monitor as the host device, passing the data back to the PCs via PCIe.

One interesting note about the physical connectivity: the USB 3.1 and the Thunderbolt connections will utilize the same physical wires. This means that a TB3 port will only be able to run as either a Thunderbolt 3 or a USB 3.1 connection, not both. That is why a USB 3.1 device must be installed after the last daisy chained Thunderbolt device. USB 2.0 has its own dedicated wires in the cable though so you can run USB 2.0 devices off of a Thunderbolt device but still pass Thunderbolt on to the next product in the chain.

(Note: an exception to this scenario above is if a TB3 device implemented a separate USB 3.1 controller itself and thus could offer that capability passed through PCIe directly.) 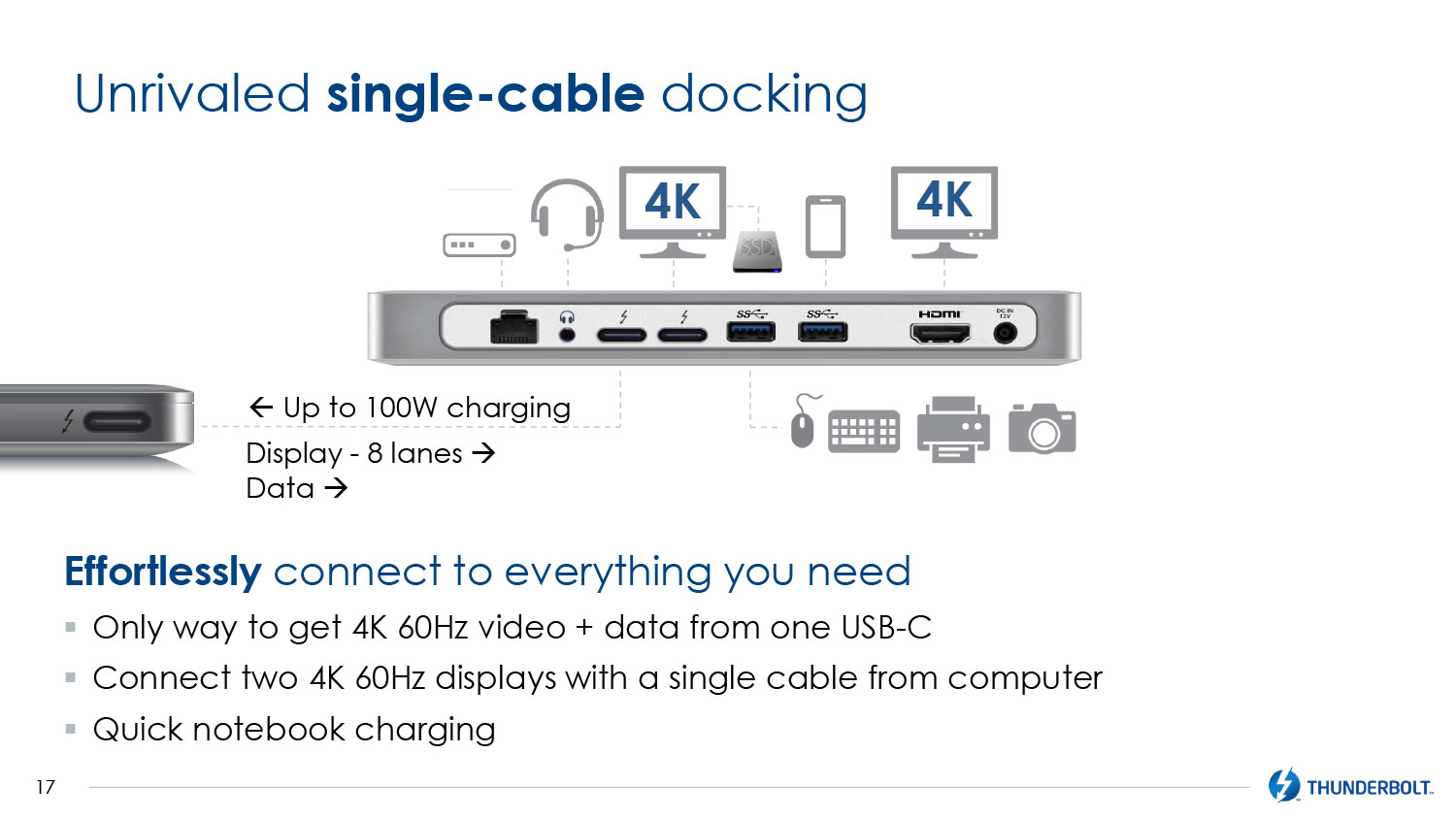 Possibly the most important utilization of Thunderbolt 3 will be in single-cable docking stations. With one connection from your notebook to a dock you can add Gigabit Ethernet, multiple 4K display connections, keyboards, mic, external storage and more. This single connection from your dock to the notebook will not only pass the data back and forth but will also allow up to 100 watts of power for charging said notebook. This would basically mean a powered docking station on your desk would need a single cable for power and all accessory connections. 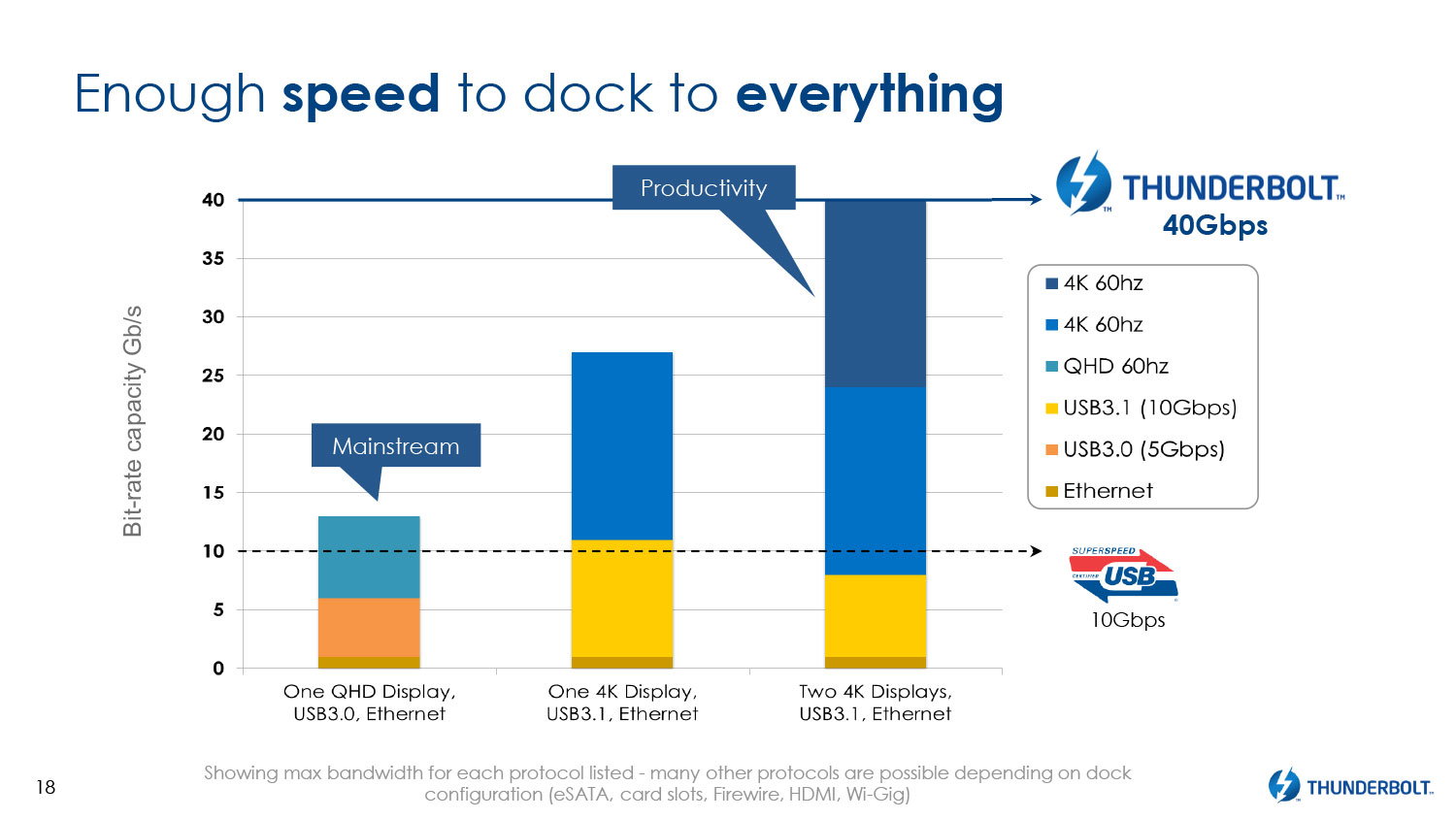 You might think that 40 Gbps is overkill for the device connectivity you use, and you may be right. But the example on the right in the slide above shows a user with two 4K displays, a USB 3.1 storage device, some USB 3.0 hardware and a Gigabit Ethernet connection, just coming in at the peak 40 Gbps capability of TB3. But even a user with a single 4K display and USB 3.1 storage device could exceed the bandwidth available in Thunderbolt 2, giving credence to the need for this upgrade. 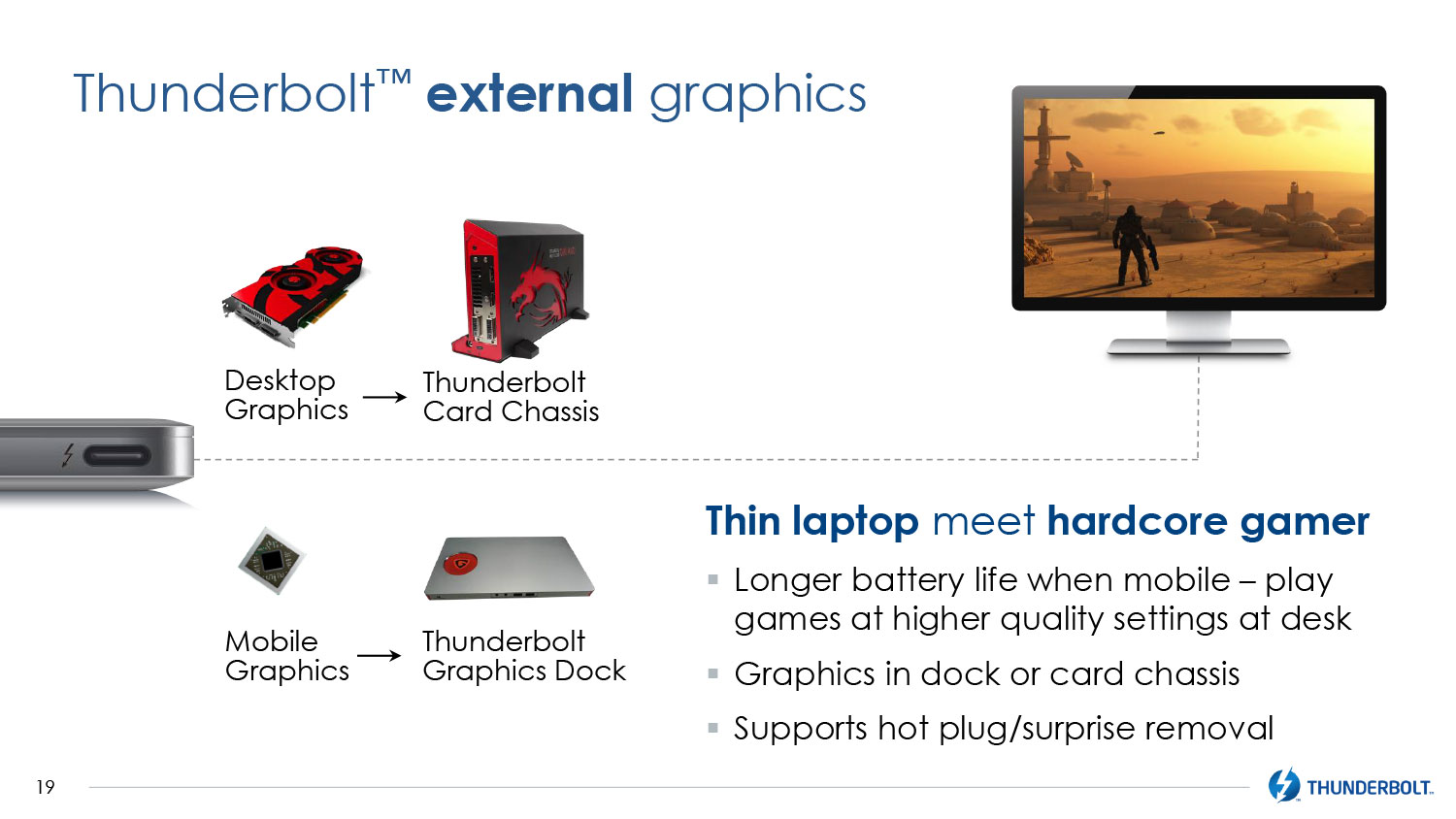 Oh here we go again: the holy grail for enthusiasts. External graphics. Intel is promoting the idea and helping with validation this time so I have a lot more confidence that it will work, mentioning specifically that it is working with AMD to make sure that hot plug capability is working without random blue screens of your device. (Sorry, no mention of NVIDIA support quite yet.) Look, this is something we have all wanted for a long time – the ability to have a thin and light notebook that we dock and play games on without having to settle for sub-par graphics performance or requiring two machines. TB3 offers more bandwidth, more flexibility and has Intel's backing in support for external graphics; I'm much more hopeful than I have been before. 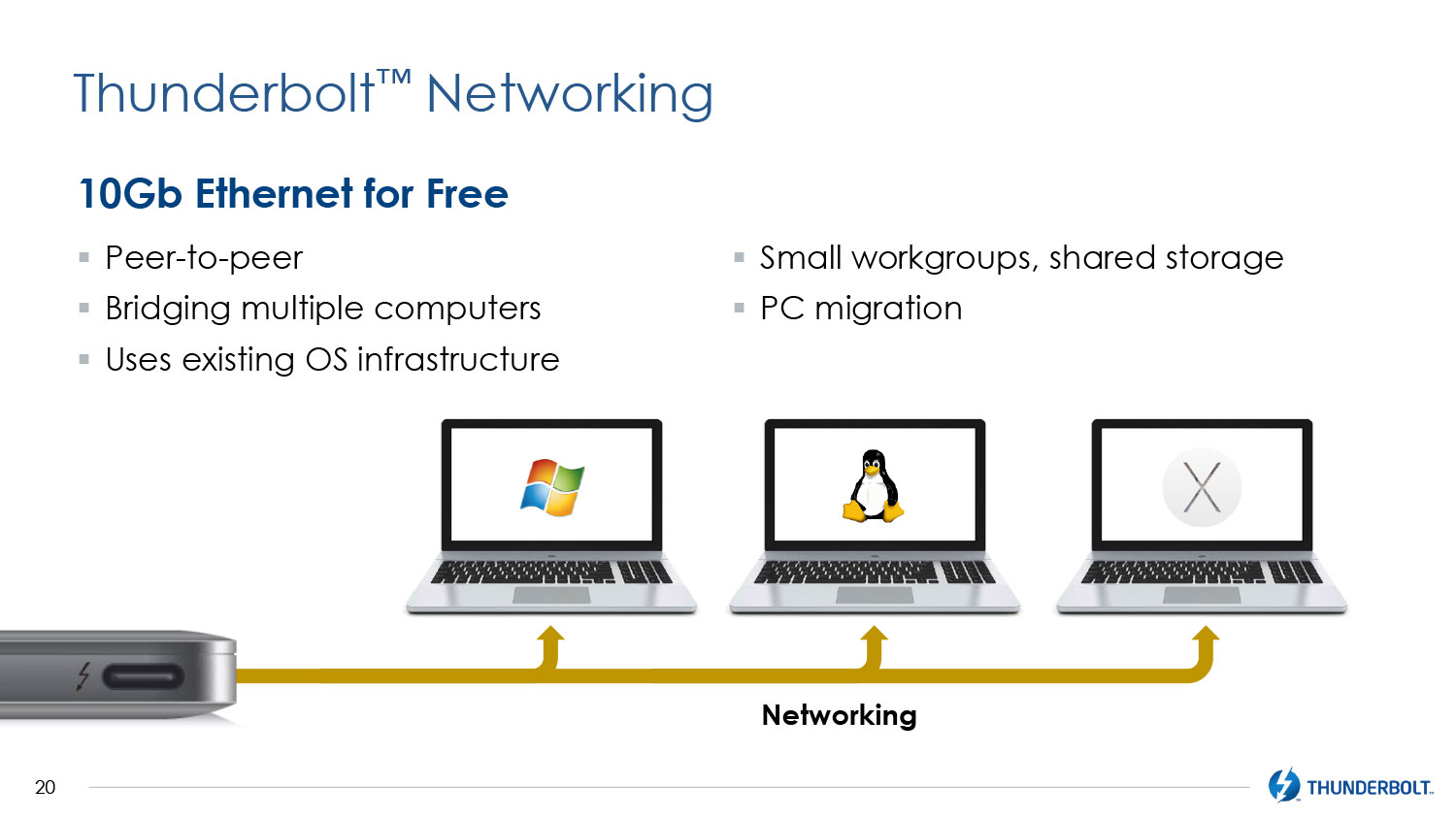 One thing we saw announced last year that never really picked up steam was Thunderbolt networking. The idea of "free" peer to peer networking at 10 GigE speeds with multi-OS support for large data transfers and small workgroups is compelling. 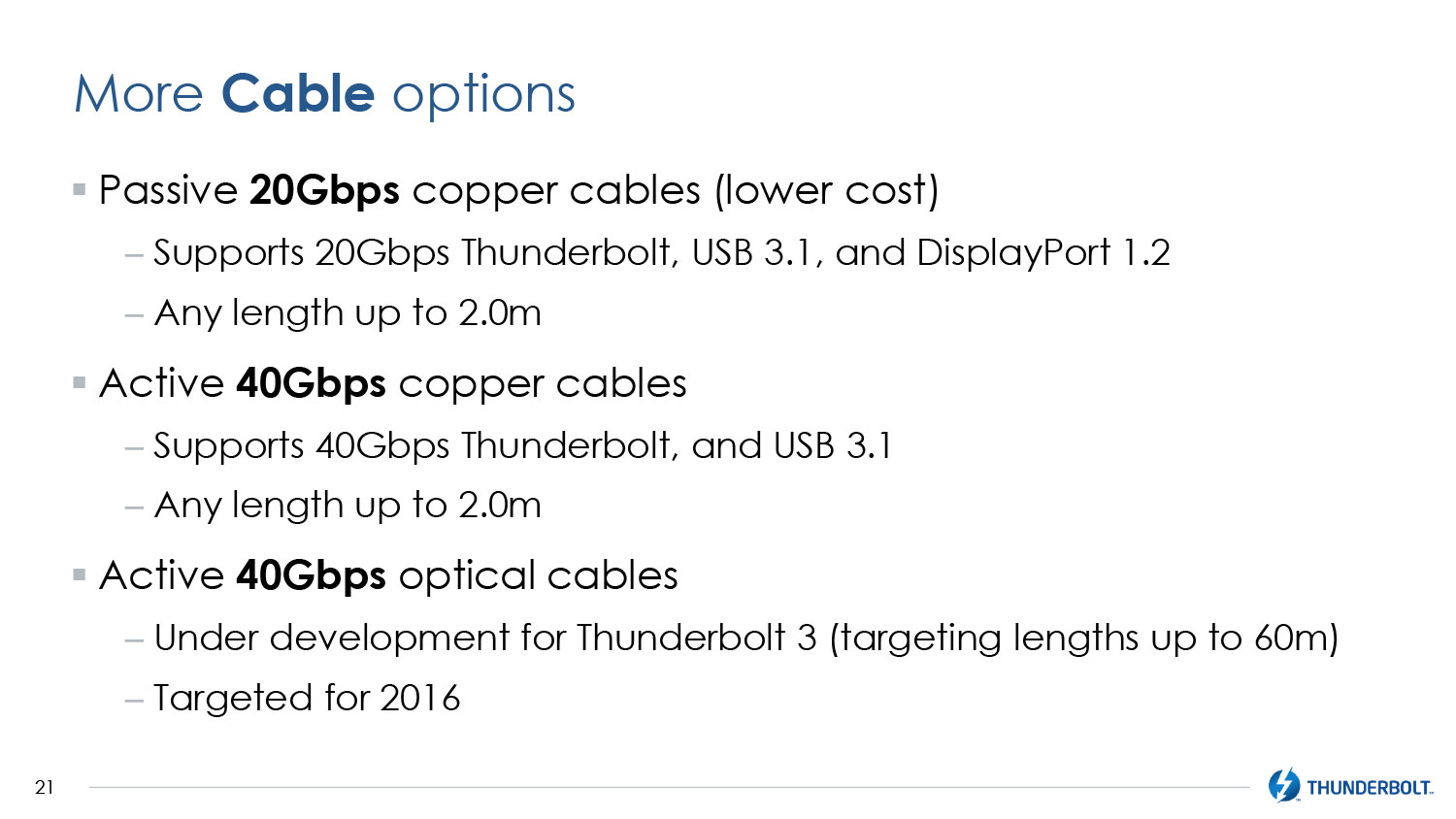 In terms of cabling, there are a few different options. First, the passive cable speed limit will be 20 Gbps and will be the lowest cost option you can get. It will still support USB 3.1 and DisplayPort 1.2 in addition to Thunderbolt but it will be limited to the Thunderbolt 2 speeds. You'll have to step up to an active copper cable to get 40 Gbps but you do lose the integrated DP 1.2 support. Also, cable length will be limited to 6 ft or so, about the same length we are used to today.

Most interesting are the active 40 Gbps optical cables that are still in development and targeted for 2016. Running at lengths up to 60 meters, expect these cables to be quite a bit more expensive but to offer the full flexibility of Thunderbolt 3. 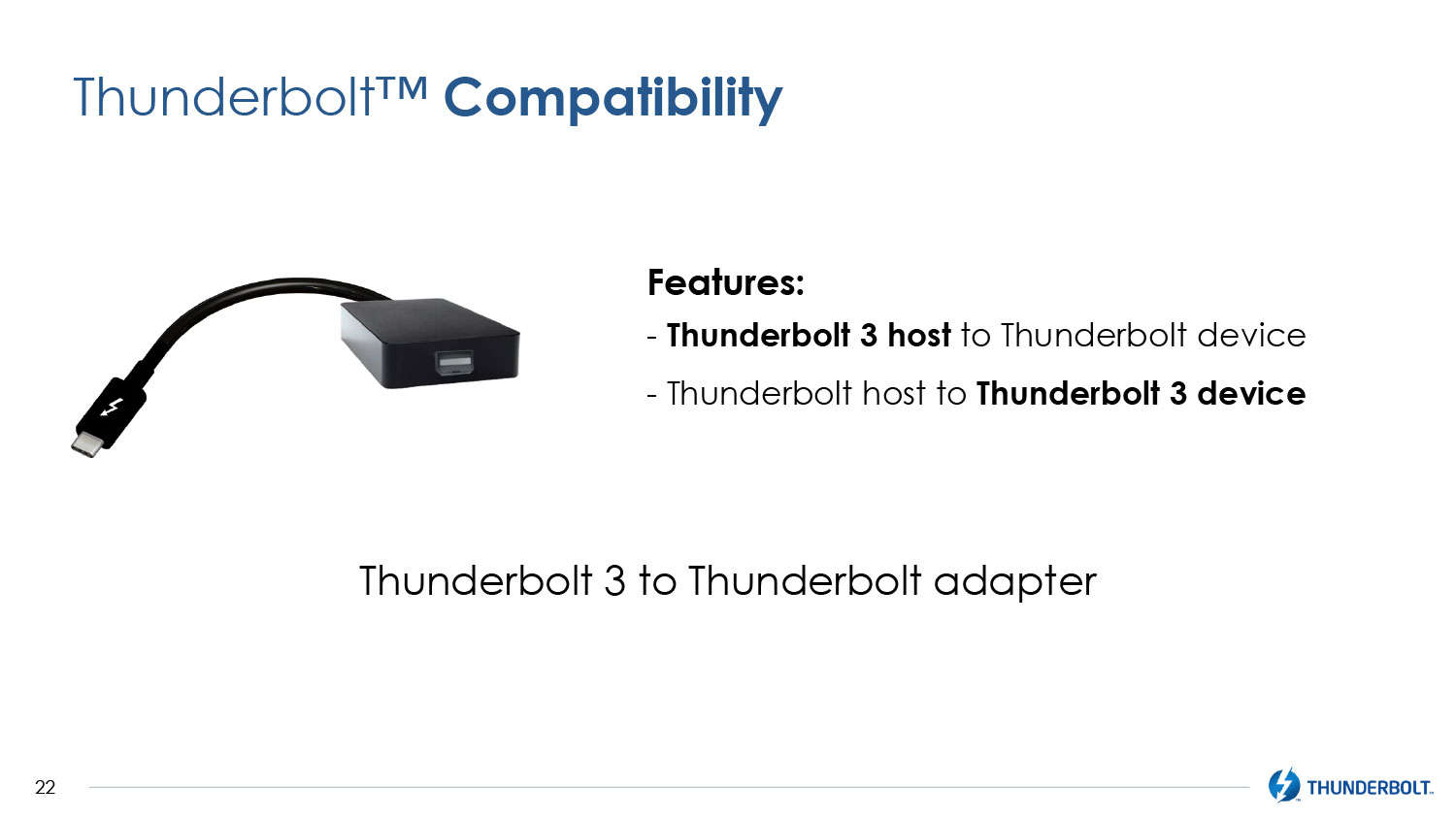 For backwards compatibility Intel is going to offer an adapter that can function both ways you might want it to: from TB3 host to a current TB device AND from a current TB host to a TB 3 device.  No word on pricing or availability of such an adapter but we are glad to see Intel thinking ahead of it.

My take away from our Thunderbolt 3 briefing is basically that Thunderbolt keeps getting better, even if I can't seem to convince people to really use it. Hopefully with the functionality of TB3 expanding to support USB 3.1, and thus not forcing system builders and users to selectively choose between the two standards, will broaden its adoption. Having a single connection that can now handle PCI Express, Thunderbolt devices, DisplayPort 1.2 4K displays and even USB 3.1 while providing up to 100 watts of charging power really is a best-of-all-worlds solution.

Thunderbolt 3 devices will start shipping this year though they won't ramp up until 2016 according to Intel. When asked about pricing for the Alpine Ridge controller Intel didn't offer any numbers, but if adoption is to increase at a clip that I want to see, costs had better drop from where they were over the previous two generations. A standard connection interface like this can only be great if it actually utilized by consumers.

What do you guys think? Are ready for this third iteration of Thunderbolt?