While this laptop is obviously geared towards gaming the inclusion of a new 5th-Gen Intel Core i7-5700HQ warrants a quick look at CPU performance. I ran a couple of processor benchmarks to see just how much better Broadwell might do in a market filled with Haswell parts. 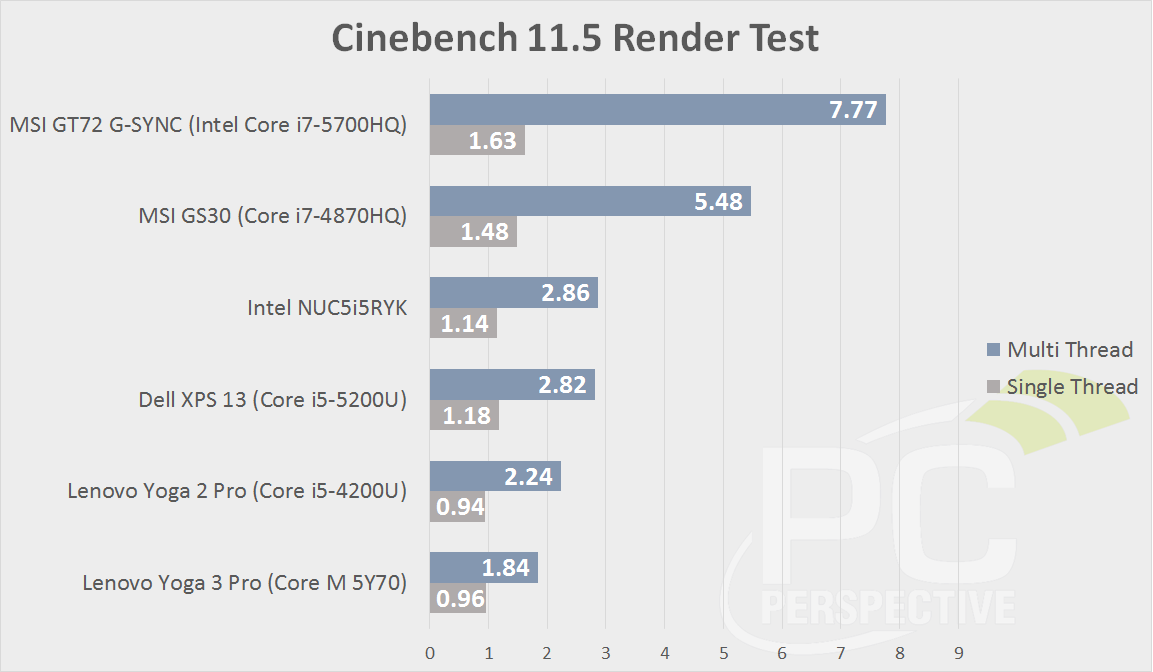 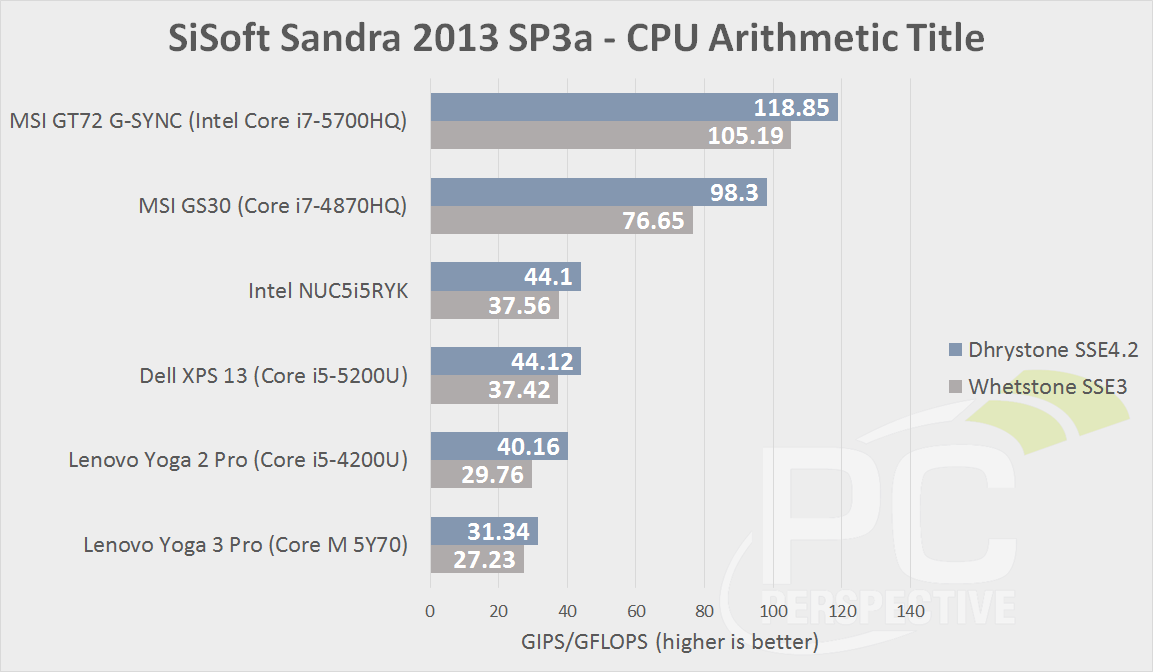 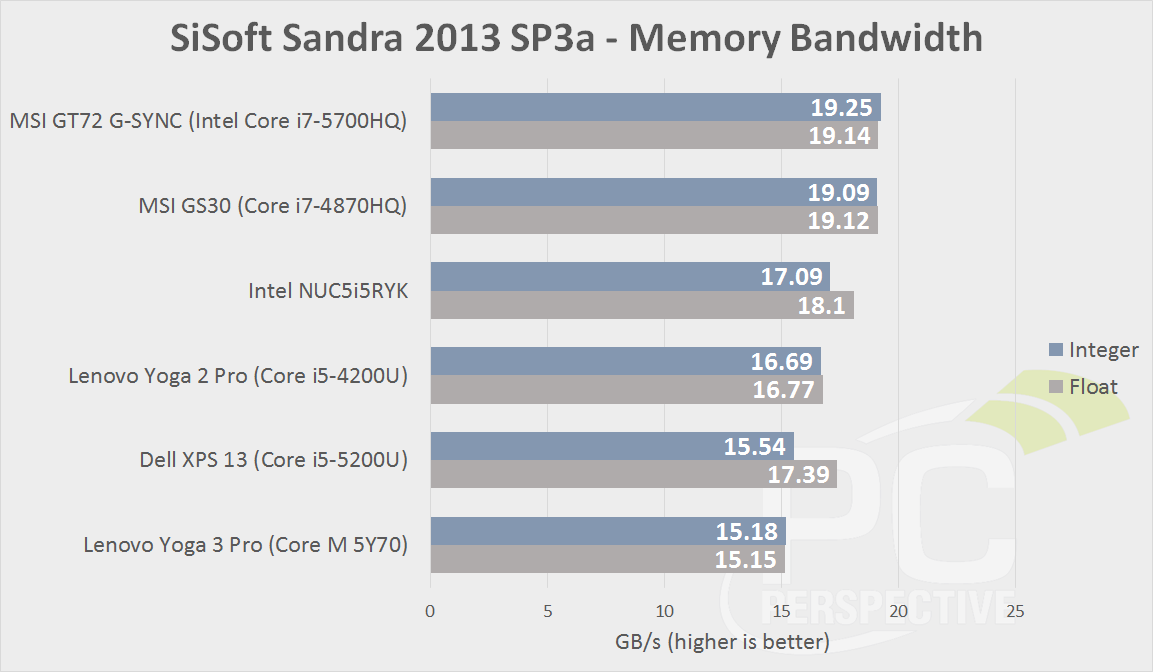 The closest results come against the Core i7-4870HQ, a 2.5 GHz Haswell part with a 3.7 GHz max turbo. The Broadwell Core i7-5700HQ has a higher base clock speed of 2.7 GHz, but has a slower turbo of up to 3.5 GHz. Even with lower top clock speeds the i7-5700HQ was faster across the board. Very impressive results, and these great numbers owe something to the outstanding cooling of this GT72 Dominator Pro G laptop as well, which allowed all cores to run at nearly the full 3.5 GHz during these tests.

After loading up a few games I quickly discovered that this Dominator Pro laptop was at least as powerful as a mid-range gaming desktop PC, so I thought it would interesting to compare its performance to the benchmarks from some of the builds from our recent quad-core gaming roundup. (Granted a midrange PC would cost about a third of this laptop's price to build, but that's a discussion for another place.) Since the GTX 980M is very close to a GTX 770 desktop card (both have a 1536 CUDA core count and similar top core clocks), I selected results using that card and the desktop version of the GTX 980, choosing the results with both Core i5 and Core i7 desktop processors to go against the laptop's new Intel Broadwell Core i7-5700HQ.

Note: The results with the MSI GT72 G-SYNC laptop were produced using the latest NVIDIA WHQL driver, 353.30, while the results for the desktop systems were all recorded using the 347.25 driver from back in January. As I can't currently go back and test all of the same hardware again with the new driver, please consider these results as an idea of what kind of performance to expect in relation to a recent desktop gaming PC.

First we'll look at a couple of synthetic benchmarks. 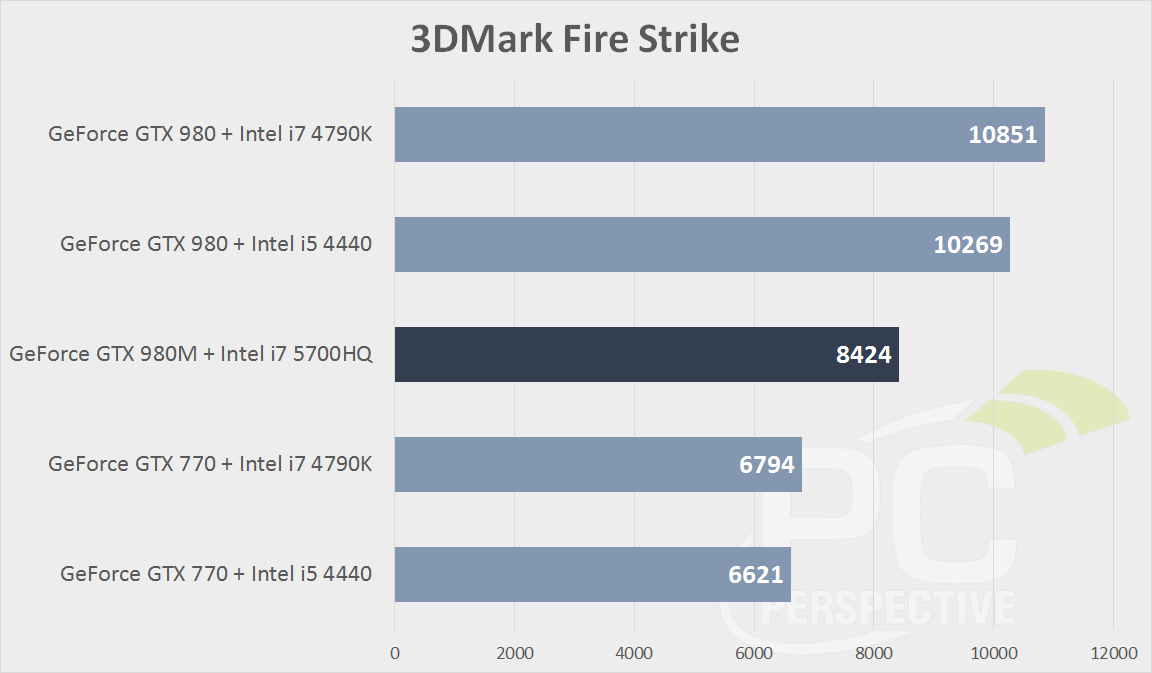 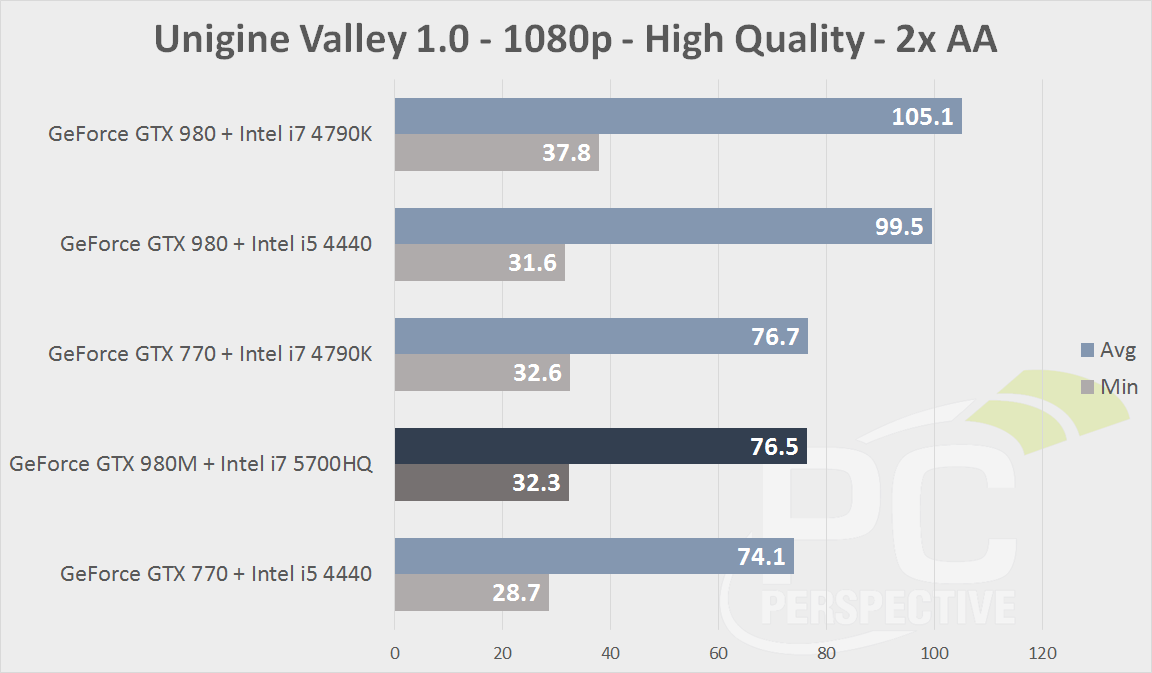 As you can see the performance of the GTX 980M + i7-5700HQ combo sits right in between the desktop GTX 770 and GTX 980 results. This is very impressive performance from a laptop!

Next we'll look at a few in-game benchmark results. 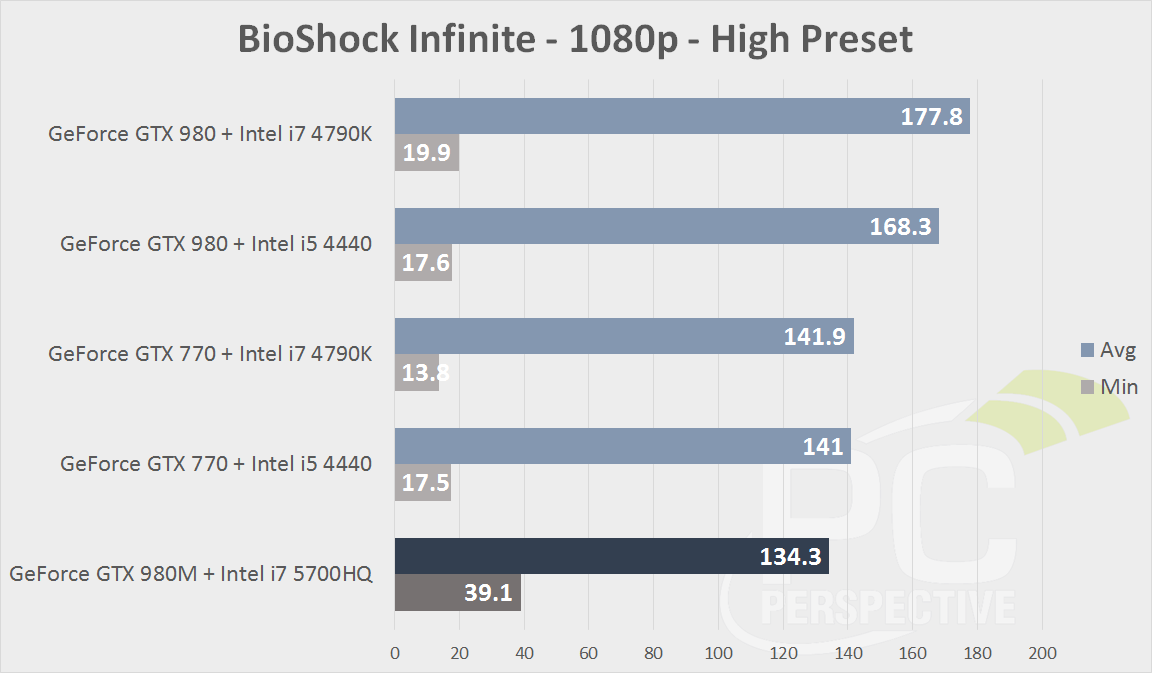 BioShock Infinite clearly shows improved minimum framerates with the latest NVIDIA drivers on the GT72 Dominator Pro G, though the average FPS numbers were lower here than the other games tested. Still, average FPS this close the desktop GTX 770 system with full-fledged Core i5 and Core i7 is very good. 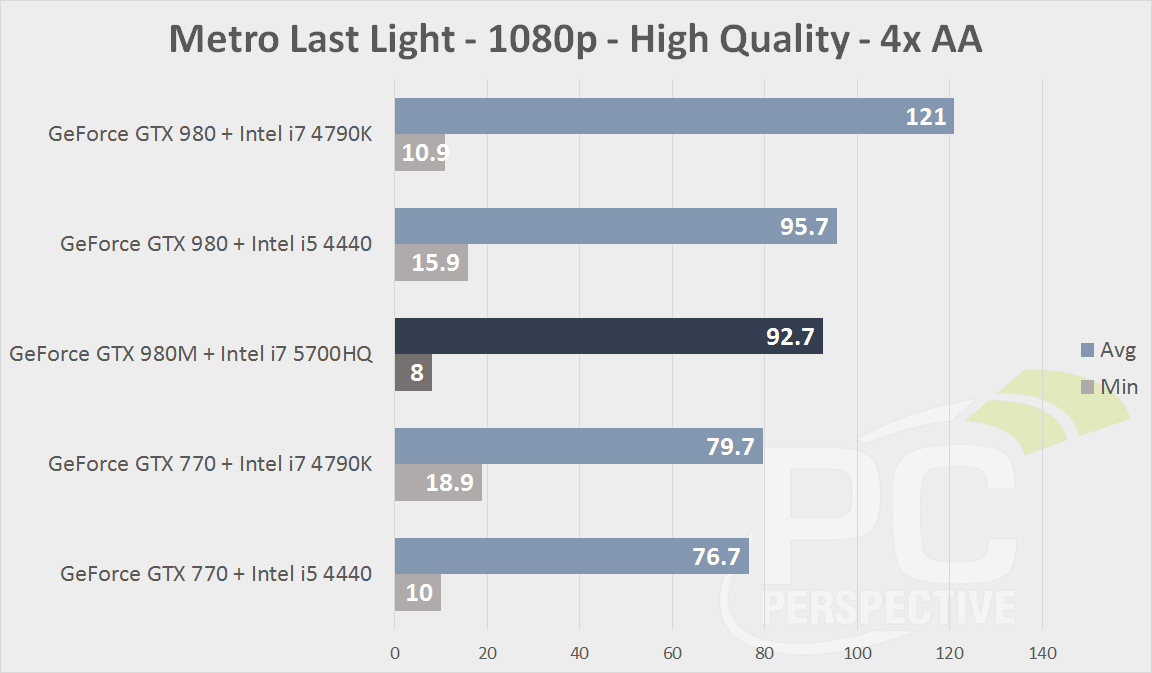 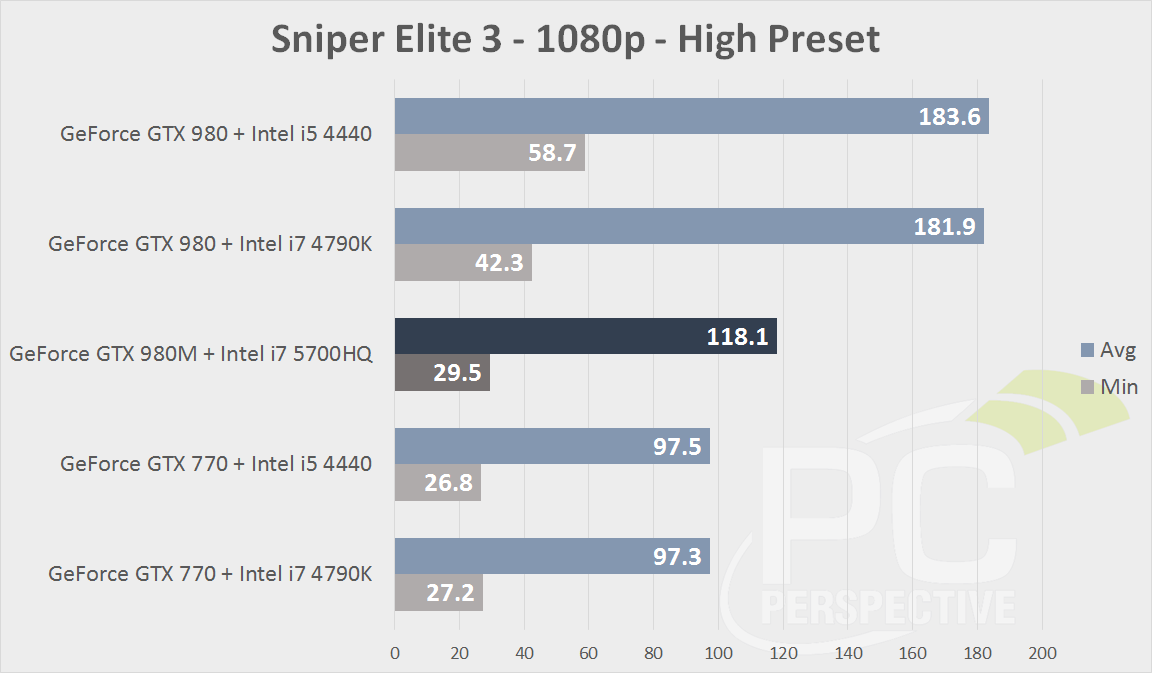 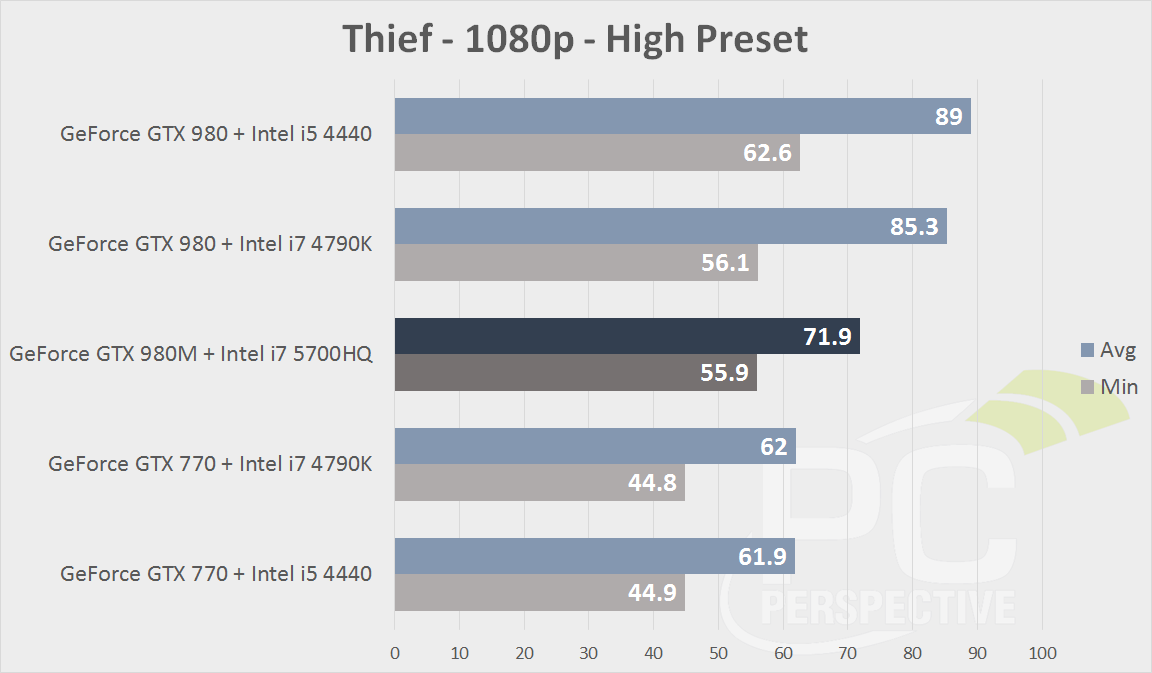 The story was pretty much identical with the last three game benchmarks, with the GT72 Dominator Pro G sitting in between the desktop results. Everything I saw with this laptop when gaming convinced me that I could actually replace a gaming PC with it, and not miss the desktop all – and that's before I even tried G-SYNC on this 75 Hz IPS panel!

For a true test of G-SYNC I needed to test out some more challenging material. High settings in recent games still resulted in average frame rates well over the minimum to allow for smooth gameplay with VSYNC enabled, and it's really when the FPS numbers drop below the panel's native refresh rate that variable refresh has a real advantage. Rather than turning up the settings in the games previously tested, I was able to test G-SYNC performance for myself using two of the hottest games out right now, Witcher 3 and Grand Theft Auto 5. 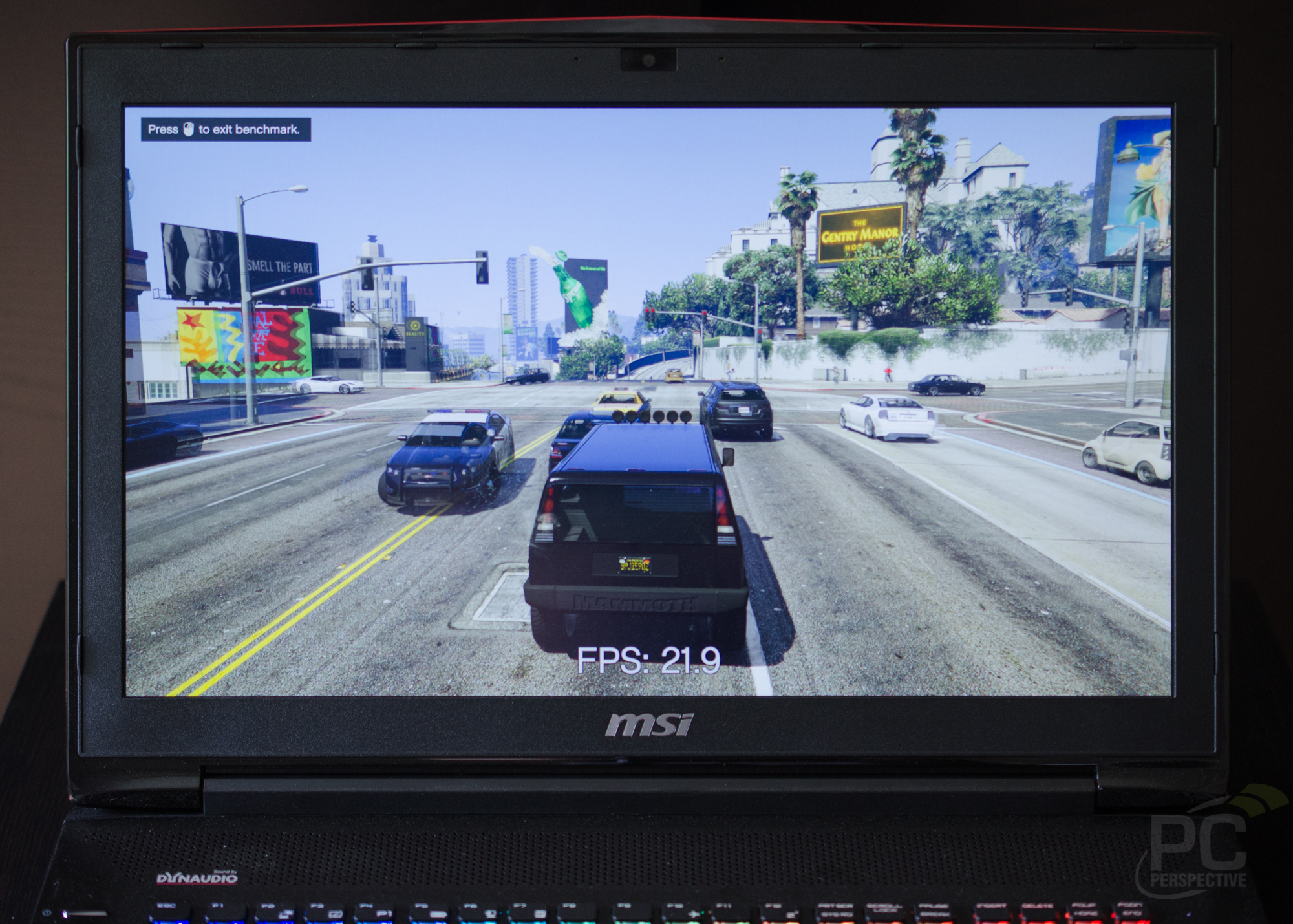 I manually turned every option up to its highest value in GTA5 (and I mean everything), and promptly received a warning that I had exceeded the recommendations for the graphics card. Naturally I disabled this warning and pressed on with these insanely high settings and ran the built-in benchmark. I did this with and without G-SYNC enabled, and the results were immediately noticeable. I averaged 39.8 FPS in the game, which as you might expect was still not exactly smooth looking on a 75 Hz panel. It wasn't bad by any means, but still had characteristic tearing, particularly with the drops in framerate during the run-throughs (minimum FPS was 21 FPS across all of my benchmark runs). This is basically an ideal situation to test out G-SYNC, as the game was consistently dropping to a low minimum frame rate and looking pretty bad in those moments.

Enter variable refresh, which transforms this 75 Hz panel into something that actually looks native at these lower framerates. Well, actually it is native at these lower frame rates. This is a weird phenomenon if you're seeing it for the first time – but in a very good way! I repeated the test a few times and really noticed the difference with G-SYNC at these unreasonably high-for-a-laptop settings, and there's no way I would have attempted to play like this (Ultra quality with 8x MSAA? Really?) if I didn't have a panel that could adjust for what was pretty low FPS gaming for the most part.

As good as GTA5 looked I couldn't wait to try out another graphically-intense new game with this laptop: The Witcher 3: Wild Hunt. 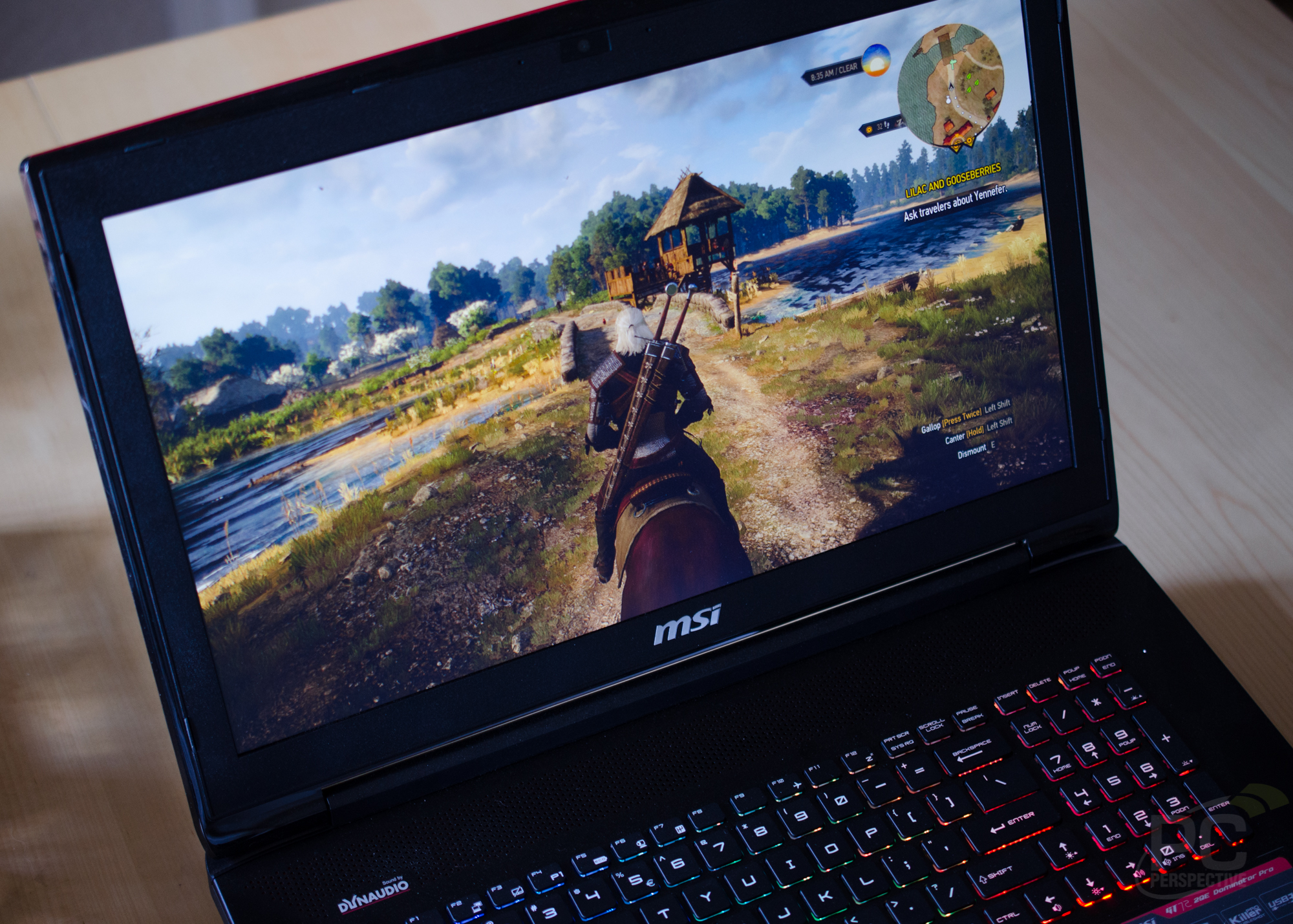 With all settings turned to their maximum values I did a quick run from the pub in the first level. Mounting the horse and encountering NPCs and environmental characters in this lush world I managed 33 to 34 FPS average. When running without G-SYNC I experienced the usual tearing and unrealistic judder when moving around at these settings, which makes perfect sense as this is a 75 Hz panel and I'm no where near an integer of that at 33.5 FPS average. Here's where the variable refresh from G-SYNC makes such a big difference; at the same settings I performed the exact same run-through, but this time it had that buttery effect when you hit the native refresh on a panel (or a situation like 30 FPS on a 60 Hz panel) with VSYNC enabled, but here I was only averaging 33 to 34 FPS.

What I took away from my first G-SYNC experience was that smoothness of gameplay can be attained at lower average frame rates, which has the added benefit of allowing much higher detail settings in the same games. While a similar effect can be had on this laptop if you simply turn down the detail settings until you can average over 75 FPS consistently, and then enable VSYNC, this is hardly ideal. If I didn't have G-SYNC as an option I would have to reduce quality in most newer games, but having the ability to play at ultra quality is kind of a big deal if you're spending over $2000 on a gaming system! With G-SYNC both of these new titles played smoothly and looked incredible, and while the same detail quality would be achievable on a system without G-SYNC, the experience was not enjoyable with judder and tearing.

I'm in complete agreement with NVIDIA in pushing GTX-powered gaming laptops to include the G-SYNC feature going forward, and (as you've probably heard all along) it's a difference that really needs to be seen in person to appreciate. It made the games literally appear to be running at higher frame rates with the same hardware. I don't know of a better way to describe the effect.

Next we'll look at thermal performance and battery life, and then I'll cover some final thoughts on the Dominator Pro G.

ASUS Looking to Launch S101 rather than Eee

The fresh smell of ASUS