It was fascinating to go over all of these benchmarks 6 months into what had become a daily task, and see what kind of performance differences there were with the various CPUs. In writing this piece I had to accept that I have become essentially a curator of data, as there are so many angles to approach this information. One of the most obvious is the price/performance ratio, which I've covered with a similar CPU/GPU roundup here. The AMD parts, GPU and CPU, are less expensive than their NVIDIA and Intel brethren, and I'll leave it to the reader to decide if one should be chosen over the other. It's certainly interesting to see just how close some of the results were even with sometimes disparate price tags – and that's a great thing for the PC gamer trying to get the biggest bang for their buck. 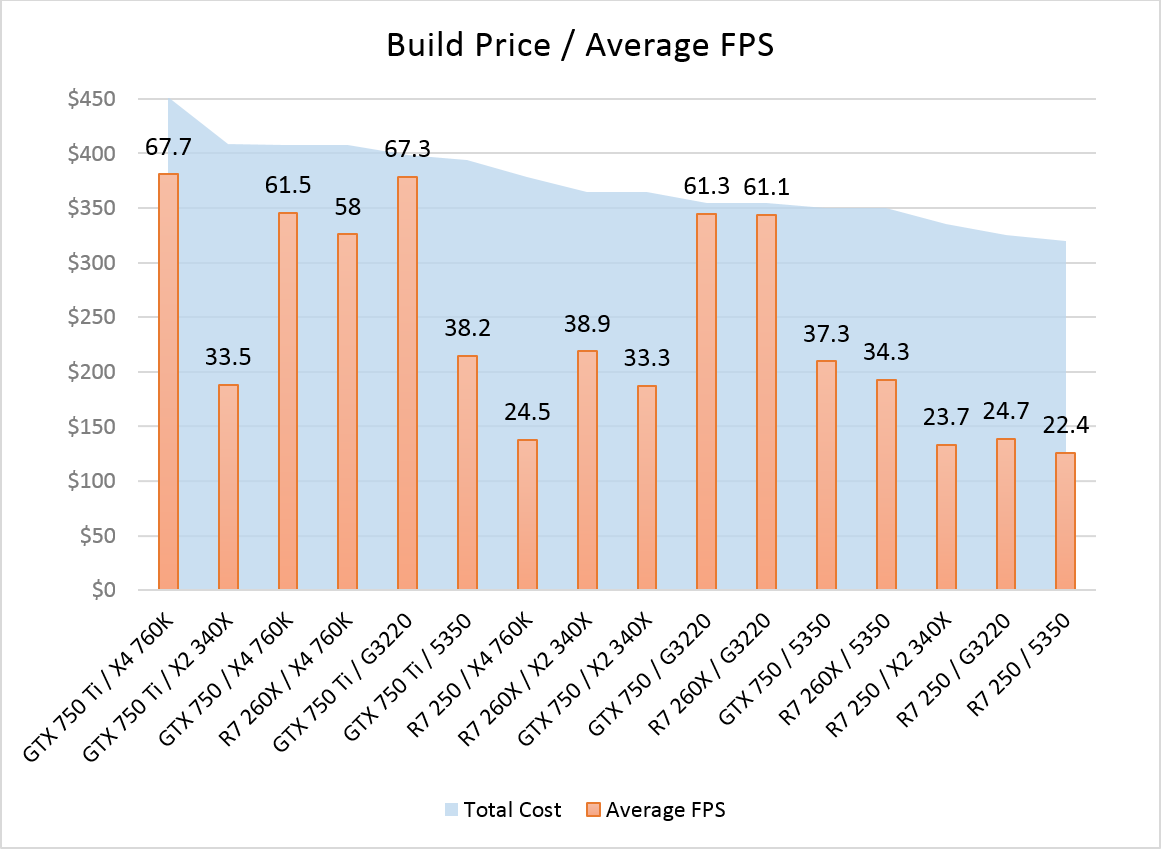 Ah, the days of testing only 16 systems (price/performance from the prior roundup)

Ultimately this experiment was about gaming in the era of a quad-core minimum spec, and with some very affordable options from AMD on the market (such as the staff favorite Athlon X4 860K) it was fair to ask if a GPU would perform any differently with more powerful (and more expensive) CPU. As you have seen from these results in most cases the answer is yes, but this primarily matters if your GPU is at least a "mid-range" card. Lower-end GPUs will bottleneck performance before the CPU will, but even on the high end there is certainly a point where squeezing out those last few FPS isn't worth the added expense. For example I found that even the $339 Intel Core i7-4790K didn't perform much differently than a simple $185 i5-4440 in most games.

While I did not conclude that an $80 part like the X4 860K was "just as good" as any Intel CPU for gaming, the Athlon's bigger relative on the AM3 side – the FX 8350 – performed quite well and is very reasonable at $165, just under the base price of a Core i5. I can't really recommend the FX 9590, however, even if $259 nets you the CPU and an AIO liquid CPU cooler. The Core i5-4440 provided better performance in most cases and does it for more than 100W less power – and the stock Intel cooler would actually work just fine if you're on a tight budget.

To address calls from the readers before I ever get them, I'll briefly cover the things I didn't test here. So, should I have included parts like the FX 6300, a 6-core CPU that sells for $99 and is rightfully popular with budget gamers? Of course! Along with countless other components I didn't have – and never would have been able to test anyway. As-is, this experiment took 6 months to complete, and became a study in what could be accomplished by one enthusiast working alone in their spare time at home. There's a reason 36 systems aren't tested like this very often!

As much as I feel like I left a lot of deserving hardware out of the mix (R9 285, GTX 960, etc. – not to mention the new 300-series parts from AMD that weren't available yet) there were so many more games I would have loved to have tested. But as the article grew in scope there would have been no way to add even one more game benchmark, especially as I rigidly stuck to a consistent method of running each test with identical software and three identical runs for each CPU, GPU, resolution, and, when applicable, API (hint: this is very time consuming!). 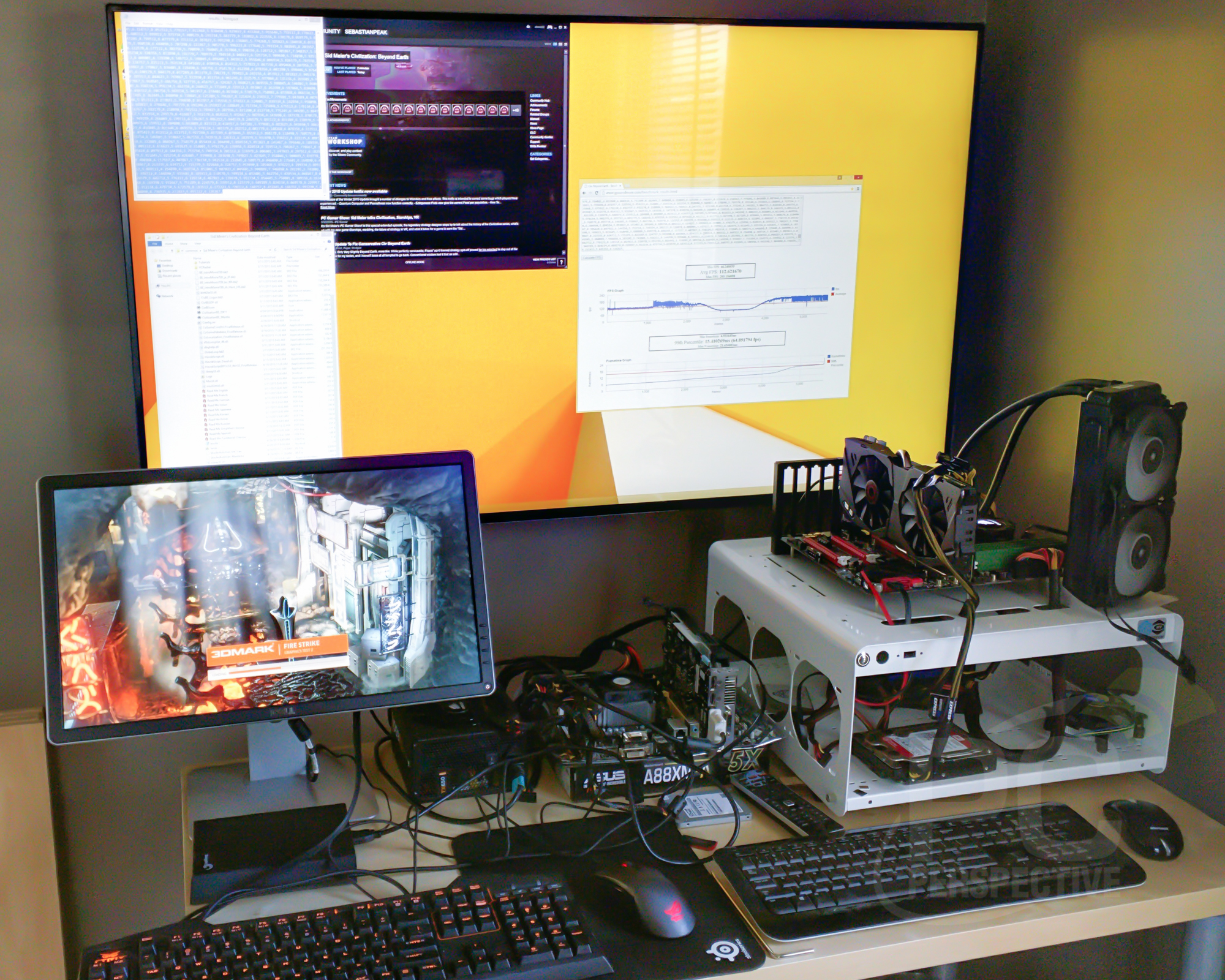 The benchmarking station in full effect!

I will let the reader of this massive experiment draw his or her own conclusions from the data presented in this article. I hope it can be used as a reference to assist in a CPU or GPU purchase, or simply provide an interesting look at how hardware changes can affect performance with the same software. If I had to pick a couple of standouts they would be the Radeon R9 290X and Intel Core i5-4440, which managed to essentially match the performance of much more costly parts in many of the tests. I'll add that as of this article's writing the prices R9 290X cards have crept up to the $400-range after spending quite some time around $330, where they had such an advantage in the price/performance category. Still, cards like the $399 MSI 290X Gaming (and of course the new R9 300-series) provide excellent price/performance for a gaming GPU.

Going forward the budget CPU/GPU landscape might look much different once games are commonly running on DirectX 12, as the Mantle results here provided plenty of evidence that game performance can be dramatically better with lower system overhead. There will soon be a new version of Windows, a new standard graphics API, and hopefully a lot of great things for us PC gamers in the year ahead. I'm excited to revisit this subject matter again to find out what's changed. Untimately it's all about having fun playing games on the one platform that offers total control over the hardware experience, but half the fun of PC gaming is building up the system (for me, anyway). I hope this article helped answer at least some questions, even if it may have left so many more unanswered.

A new home for HTPCs