We finally have the ability to tell you about the new AMD Radeon R9 Fury graphics cards. Do these air-cooled options improve AMD’s stance?

Last month was a big one for AMD. At E3 the company hosted its own press conference to announce the Radeon R9 300-series of graphics as well as the new family of products based on the Fiji GPU. It started with the Fury X, a flagship $650 graphics card with an integrated water cooler that was well received.  It wasn't perfect by any means, but it was a necessary move for AMD to compete with NVIDIA on the high end of the discrete graphics market.

At the event AMD also talked about the Radeon R9 Fury (without the X) as the version of Fiji that would be taken by board partners to add custom coolers and even PCB designs. (They also talked about the R9 Nano and a dual-GPU version of Fiji, but nothing new is available on those products yet.) The Fury, priced $100 lower than the Fury X at $549, is going back to a more classic GPU design. There is no "reference" product though, so cooler and PCB designs are going to vary from card to card. We already have two different cards in our hands that differ dramatically from one another.

The Fury cuts down the Fiji GPU a bit with fewer stream processors and texture units, but keeps most other specs the same. This includes the 4GB of HBM (high bandwidth memory), 64 ROP count and even the TDP / board power. Performance is great and it creates an interesting comparison between itself and the GeForce GTX 980 cards on the market. Let's dive into this review!

Every new graphics card review should start with a little analysis of the GPU itself. Obviously the architecture improvements and capabilities of the cut-down Fiji GPU on the AMD Fury are identical to those found in the Fury X, so if you need that information I would ask that you check back into our story from last month that go over those changes in great detail.

The Fiji Pro GPU differs from the Fiji XT found on the original Fury X in a couple of important ways. First and foremost, the stream processor count drops from 4096 down to 3584, a loss of 512 or 14%. That means AMD's Fury card will include 56 compute units compared to the 64 compute units found in the Fury X and along with the stream processor change comes a decrease in associated texture unit count as well. That drops from 256 to 224, the same 14%.

The "up to" rated clock speed on the Fury GPU is 1000 MHz though we already know of some overclocked models that are shipping on day of release (which is July 16th). Those overclocks appear to be minimal (~40-50 MHz) so don't expect a lot of variance quite yet. That 1000 MHz reference speed is just 50 MHz shy of where the Fury X ran with the water cooler integration; I know that some users will be surprised that there aren't more performance gains and headroom found in that original Fury X product. 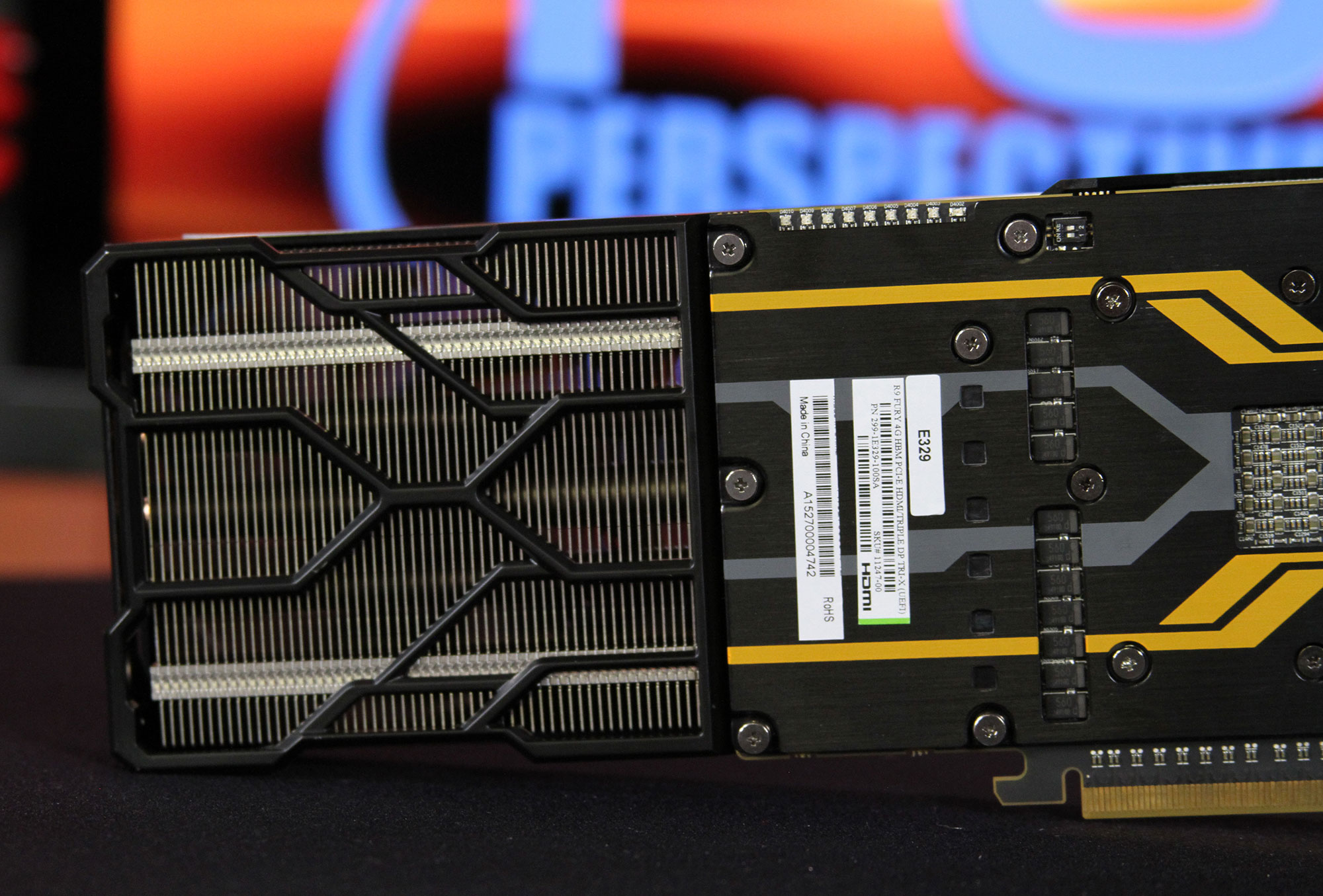 The memory sub-system remains unchanged on the Fury from the Fury X. We are still using the stacked memory with interposer combination dubbed HBM, high bandwidth memory. This is another pretty complex topic that if you are unfamiliar with is worth reading up on. We have an editorial on the dramatic changes that HBM offers for GPUs that you should comb over. The memory clock speed of just 500 MHz remains over the 4096-bit memory interface, resulting in 512 GB/s of total memory bandwidth, the same as on the Fury X. Also, there are still 64 ROPs / raster operators on Fury, the same number that ships on Fury X.

Interestingly, the TDP of the Fury is identical to that of the Fury X, despite that fact that we are running at a slightly lower clock speed and with 14% fewer stream processors in operation. We are likely seeing the result of AMD's Fiji GPU binning to get the best GPUs on the flagship Fury X product. That improved silicon will often run at lower voltage thresholds for the same performance level and thus the "slightly worse" GPUs that make their way into the retail Fury cards need a bit more juice to get the 3,584 SPs up and running stable. In our real world testing this is echoed as well, where the Sapphire R9 Fury card uses just 6-7 watts less power than the Fury X sample.

Peak theoretical performance drops from 8.6 TFLOPS down to 7.2 TFLOPS with the decrease in clock speed and shader count, but that is still a number that exceeds the highest rated GM200 GPU. But as we know from our previous Fury X review, TFLOPS ratings do not correlate to actual gaming performance all the time.

So now we know what is the same – what is different? It's all in the implementation.