We don’t have benchmarks yet, but we do have pictures and specifications. That’s worth something, right?

Way back on June 16th, AMD held a live stream event during E3 to announce a host of new products. In that group was the AMD Radeon R9 Fury X, R9 Fury and the R9 Nano. Of the three, the Nano was the most intriguing to most of the online press as it was the one we knew the least about. AMD promised a full Fiji GPU in a package with a 6-in PCB and a 175 watt TDP. Well today, AMD is, uh, re-announcing (??) the AMD Radeon R9 Nano with more details on specifications, performance and availability.

First, let’s get this out of the way: AMD is making this announcement today because they publicly promised the R9 Nano for August. And with the final days of summer creeping up on them, rather than answer questions about another delay, AMD is instead going the route of a paper launch, but one with a known end date. We will apparently get our samples of the hardware in early September with reviews and the on-sale date following shortly thereafter. (Update: AMD claims the R9 Nano will be on store shelves on September 10th and should have "critical mass" of availability.)

Now let’s get to the details that you are really here for. And rather than start with the marketing spin on the specifications that AMD presented to the media, let’s dive into the gory details right now. 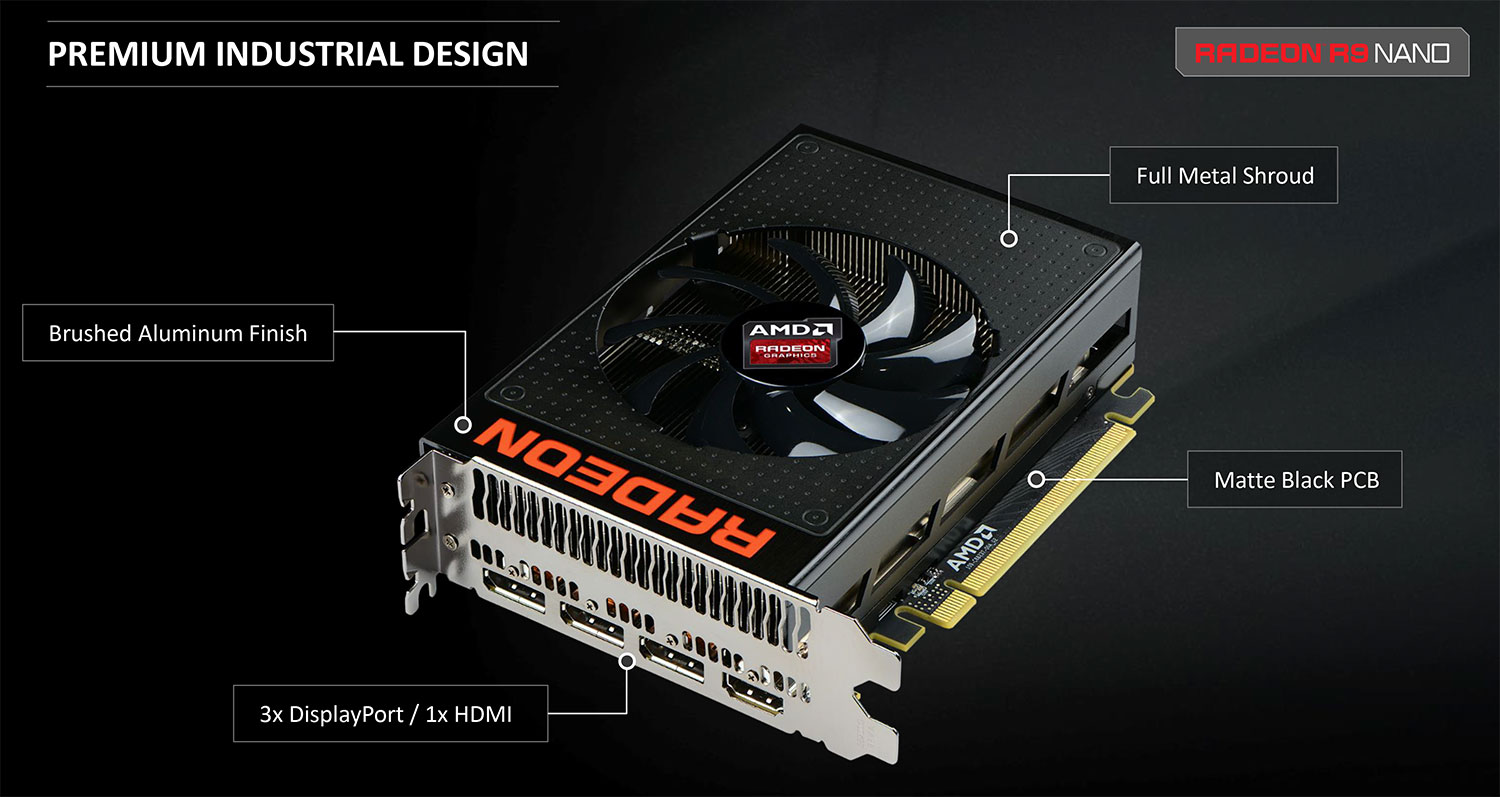 There is one very big difference that we have to point out though: The R9 Nano is rated with a 175 watt TDP, the Fury X at 275 watts. That is a difference in power consumption that we just haven’t seen in any other card to card variance when based on the same GPU. It almost seems impossible and until we have a card in our hands to test, I’m going to continue to have my doubts.

As I see it there are only two ways that AMD can make this magic happen. The first is that they have been binning the Fiji GPUs for the release of the R9 Nano since day one, saving any GPU that shows incredible power efficiency for this launch; knowing that meeting that 100 watt difference goal was going to be a top priority. Finding a GPU that could run at 1000 MHz at a lower voltage would save AMD a lot in the thermal dissipation department since we know that voltage and frequency do not scale linearly.

The second option is that AMD has built the R9 Nano with an “up to” clock speed of 1.0 GHz but that it doesn’t hit that as often as you might expect. If you test a Fury X or even an AMD Fury today (or even the R9 390/390X cards) you will see that even though the cards all list “up to” clock speeds, you almost never see frequencies drop below that level. That is a very different experience than using NVIDIA’s GeForce cards with GPU Boost technology – NVIDIA specifies a base clock speed and a “typical” boost frequency know that the majority of the time its hardware will be above even that number. That keeps everyone honest and makes sure there aren’t undue expectations placed on the clock rate over time in real-world gaming scenarios. When we get our hands on the hardware this will obviously be one of the key things we look for – does the Fiji GPU on the R9 Nano throttle in an open-air or small form factor chassis?

Update: Just before press time I got some additional information from AMD on this topic. Depending the workload (dependent on the game) AMD claims that the R9 Nano GPU clock will "settle" on an average somewhere between 800 MHz and 1000 MHz, always picking the most power efficient operating point. That means that the GPU will be downclocked in order to keep the card at the 175 watt TDP level it is advertised. AMD claims that the GPU will not be thermally constrained until it hits 85C and clocks wouldn't be throttled until that point. 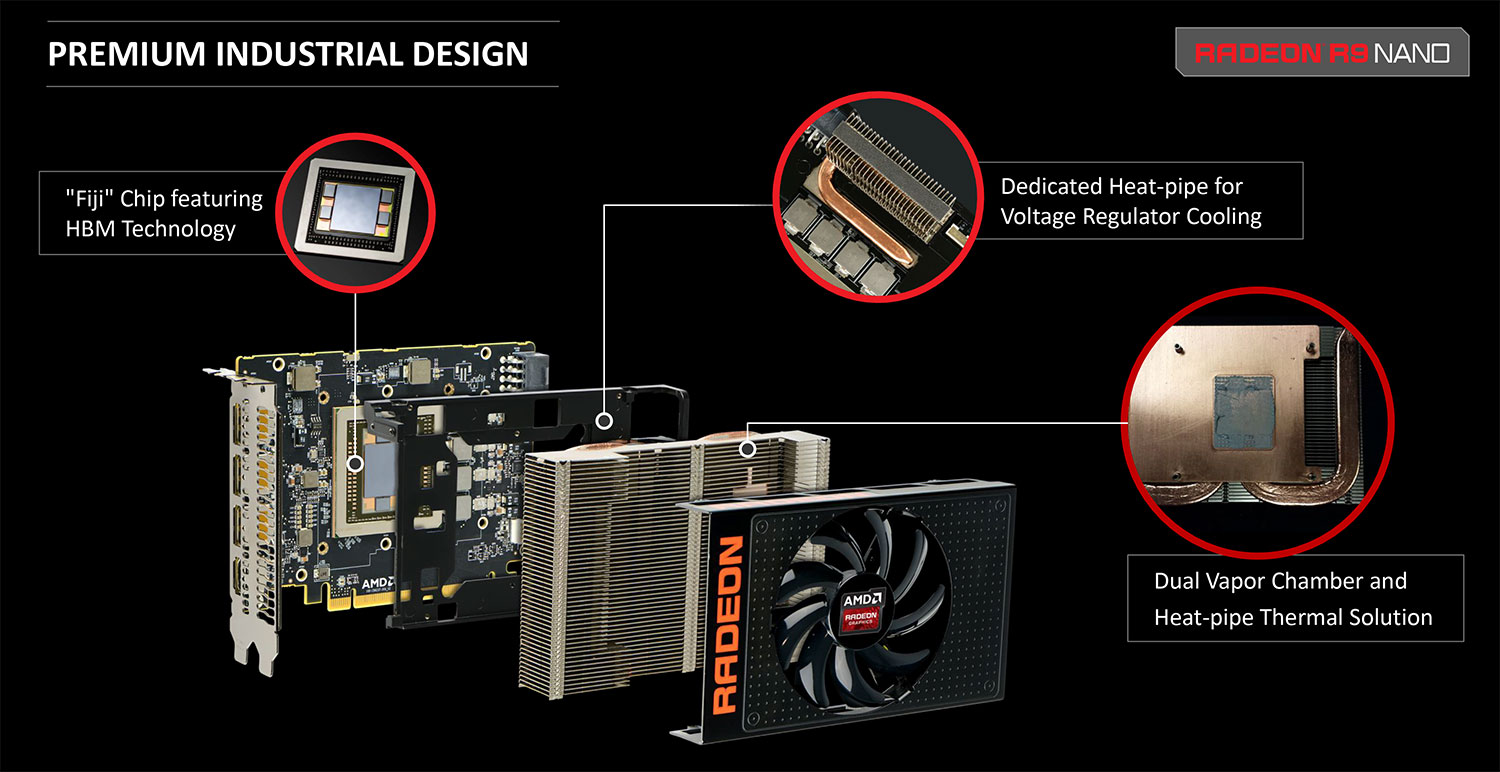 It's important to note that even though AMD says the GPU is not thermally constrained, all aspects of the ASIC performance come into play during use. Efficiency is defined as the ability to run at certain performance level and clock speed within a set TDP (which AMD has already defined at 175 watts). So if a particular game plays with a heavy GPU workload and attempts to draw more power than the 175 watts allowed, AMD's Fiji implementation will downclock until it arrives a voltage that hits ~175 watts draw. That will be different for all different kinds of software so its something we will pay particular attention to in our review.

For users that want to tweak things you will be able to adjust the power limit in the AMD Catalyst Control Center, thus decreasing efficiency, but pushing you closer to that 1.0 GHz frequency regardless of the GPU workload. This obviously takes AMD's new R9 Nano outside the range that it wanted to be able to claim for this product, and what it could guarantee in tight quarters that might be more thermally constrained, but gamers will have that flexibility if they wish, gaining as much as 10% in graphics performance based on AMD's quotes. Once you hit that 1000 MHz mark, however, you revert to the more standard overclocking models that we have already seen aren't spectacular with Fiji GPUs.

The R9 Nano isn't going to be cheap: AMD will be setting the MSRP of the card at the same level as the Fury X: $649. That's a lot to pay for a card that is performing slightly lower than the $549 R9 Fury but it has some characteristics that you just can't find in another high end GPU product. I'll await final decision on the value of the R9 Nano after I put it through its paces in a week or so.

AMD is adamantly painting the R9 Nano into a unique position in the market, and deservedly so. Spoiler alert: you can't get more performance in a smaller package anywhere else. But in order to set that up we have to have some kind of initial comparison point. For that purpose, AMD is comparing the R9 Nano to the R9 290X, the original Hawaii GPU released in October of 2013 and the basis for the R9 390X released this past June.

Here are the primary claims AMD makes about the Radeon R9 Nano:

All of that adds up to a piece of GPU hardware that has up to 2x the performance per watt and 2x the performance density (in terms of card length) compared to the R9 290X from AMD’s previous portfolio. What that means for gamers will really be determined by the hard numbers and how close in performance the Nano is to the likes of the Fury. And of course pricing; that usually matters too.

Now, let’s talk about the potential benefits to the R9 Nano form factor that AMD is touting for today’s re-announcement.

The Nano is small, damned small, even when compared to the likes of a Mini ITX system build as demonstrated in the image above. The Mini ITX form factor designates a 6.7-in square motherboard platform and with only a 6-in board length, the AMD R9 Nano fits within that easily, even considering standard PCIe plug lengths.

There are quite a few cases on the market, with more coming all the time, that have very cramped quarters for the graphics card when it comes to length. Take these three designs shown above, with card length maximums ranging from 8.66-in down to as little as 7.09-in! Clearly there several thousand times as many cases that can handle the full run of available graphics cards on the market, but this trend of smaller cases and smaller PCs is growing as more and more PC gamers get older and want to continue gaming in a domesticated environment.

Though this slide is exaggerated slightly with the case selections, the truth is that as recently as 1-2 years ago if you were going to game on a 4K monitor you would need a dual-GPU configuration and thus a standard ATX capable chassis. The Corsair 900D shown on the left is one the largest cases you can buy today, so…sure. The middle chassis could also easily hold a second R9 290X card for 4K gaming but instead it shows the installation of a single AMD Fury X card. (Also, not sure that June/July releases count as “early” 2015.) Finally, on the right, is one of the smaller Lian Li mini ITX cases with the R9 Nano resting comfortably inside.

When AMD began talking about the size benefits of integrating HBM in this generation of products, this is exactly the kind of form factor implications it was pointing towards.  From NVIDIA though, the options are a bit more tame.

The highest performing Mini ITX friendly graphics card on the market with a GeForce GPU is the ASUS GTX 970 Mini ITX (that we have in for testing already). As you can guess based on the generic metrics listed above for the R9 Nano, it seems very likely that this ASUS card will be drastically outclassed by the new smaller Fiji-based option. Pricing will still have a lot to do with this battle in the market but it would seem that for enthusiasts that care about sizing and space, the R9 Nano is going to be king of that hill for some time.

Here is a little preview of performance, as tested by AMD of course, to see what I mean. My “measure with my fingers on my laptop screen math” shows in Shadows of Mordor the R9 Nano gets around 50 FPS while the GTX 970 Mini ITX card gets something around ~35 FPS. That would be a difference of about 40% if it holds up.

Finally, AMD surprised me by telling me that it would be opening up the R9 Nano design to partners and we will likely see custom variants of the Nano later in the year.

So there you have it, you now know as much as about the Radeon R9 Nano as I do. Cards should be incoming to reviewers in the near future and I am looking forward to pitting this card against the claims that AMD made here with today’s re-announcement of the product. I’d be shocked if NVIDIA and its partners didn’t already have some kind of response in development but without the benefit of HBM (High Bandwidth Memory) I don’t know if it’s possible for Maxwell to get to the same form factor and performance / power levels that Fiji is showing us today.

As we await precise performance results, AMD’s Radeon R9 Nano looks like it might be the most interesting graphics card release so far this year.