We spend some time with the retail R9 Fury option from the ASUS, the Strix Fury.

AMD is in an interesting spot right now. The general consensus is that both the AMD Radeon R9 Fury X and the R9 Fury graphics cards had successful launches into the enthusiast community. We found that the performance of the Fury X was slightly under that of the GTX 980 Ti from NVIDIA, but also that the noise levels and power draw were so improved on Fiji over Hawaii that many users would dive head first into the new flagship from the red team.

The launch of the non-X AMD Fury card was even more interesting – here was a card with a GPU performing better than the competition in a price point that NVIDIA didn’t have an exact answer. The performance gap between the GTX 980 and GTX 980 Ti resulted in a $550 graphics card that AMD had a victory with. Add in the third Fiji-based product due out in a few short weeks, the R9 Nano, and you have a robust family of products that don’t exactly dominate the market but do put AMD in a positive position unlike any it has seen in recent years. 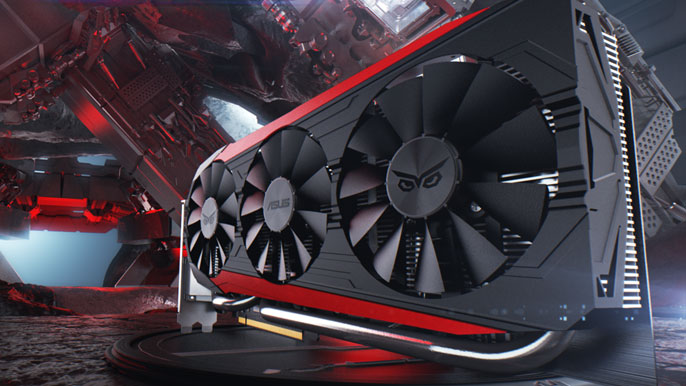 But there are some problems. First and foremost for AMD, continuing drops in market share. With the most recent reports from multiple source claiming that AMD’s Q2 2015 share has dropped to 18%, an all-time low in the last decade or so, AMD needs some growth and they need it now. Here’s the catch: AMD can’t make enough of the Fiji chip to affect that number at all. The Fury X, Fury and Nano are going to be hard to find for the foreseeable future thanks to production limits on the HBM (high bandwidth memory) integration; that same feature that helps make Fiji the compelling product it is. I have been keeping an eye on the stock of the Fury and Fury X products and found that it often can’t be found anywhere in the US for purchase. Maybe even more damning is the fact that the Radeon R9 Fury, the card that is supposed to be the model customizable by AMD board partners, still only has two options available: the Sapphire, which we reviewed when it launched, and the ASUS Strix R9 Fury that we are reviewing today.

AMD’s product and financial issues aside, the fact is that the Radeon R9 Fury 4GB and the ASUS Strix iteration of it are damned good products. ASUS has done its usual job of improving on the design of the reference PCB and cooler, added in some great features and packaged it up a price that is competitive and well worth the investment for enthusiast gamers. Our review today will only lightly touch on out-of-box performance of the Strix card mostly because it is so similar to that of the initial Fury review we posted in July. Instead I will look at the changes to the positioning of the AMD Fury product (if any) and how the cooler and design of the Strix product helps it stand out. Overclocking, power consumption and noise will all be evaluated as well.

If you recall back to our original AMD Fury review using the Sapphire model, the PCB design on that card used the same shortened length as the Fury X, obviously making little to no changes in the engineering and putting time to market and cost at the forefront. The ASUS Strix R9 Fury model doesn’t do this and, although there are definitely some oddities when it comes to the board design, this AMD Fury card looks and feels much more like your traditional high-end gaming card. 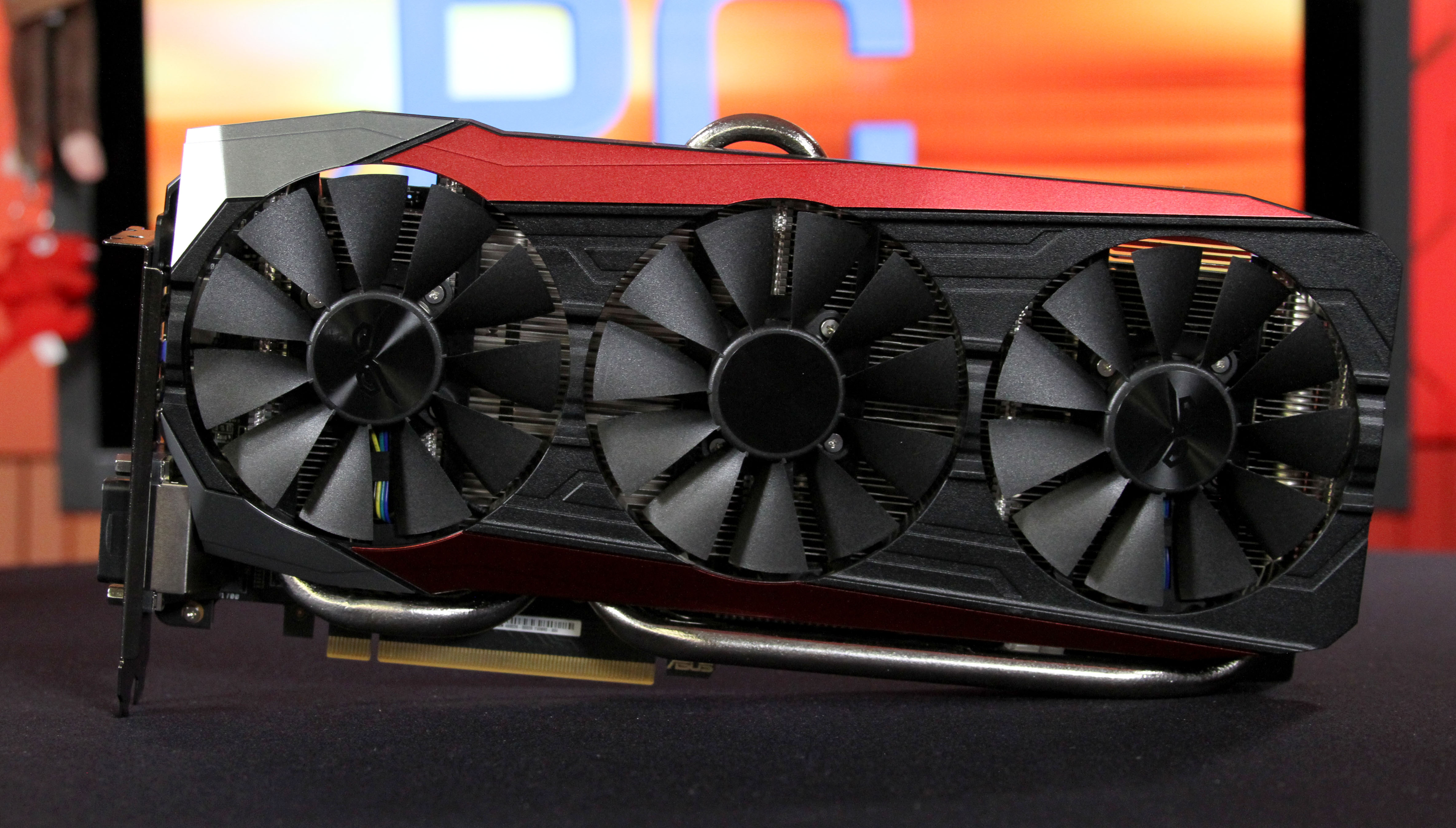 From the front, the ASUS Strix R9 Fury looks like the other recent Strix-class products in the same price range, sporting a set of three fans on a large, heatpipe DirectCU III cooler design that is clearly meant to keep temperatures on the GPU low. Just from this angle you can see one heatpipe coming from the top of the GPU cooler block and two more exiting from the bottom helping to spread the thermals from the GPU core itself out to the fins of the heatsink.

The fans on the Strix design continue to including the ASUS “0db operating” mode that allows the card to run without the fan spinning at all if the GPU temperature is kept at ~65C or below. While that doesn’t happen for most of our gaming scenario, if you happen to play some MOBA titles and enable VSync or turn on a frame rate limiter, you can definitely take advantage of that capability. However, even when spinning up while playing a beast of a PC title like GTA V, the noise levels generated by the Strix are surprisingly low. 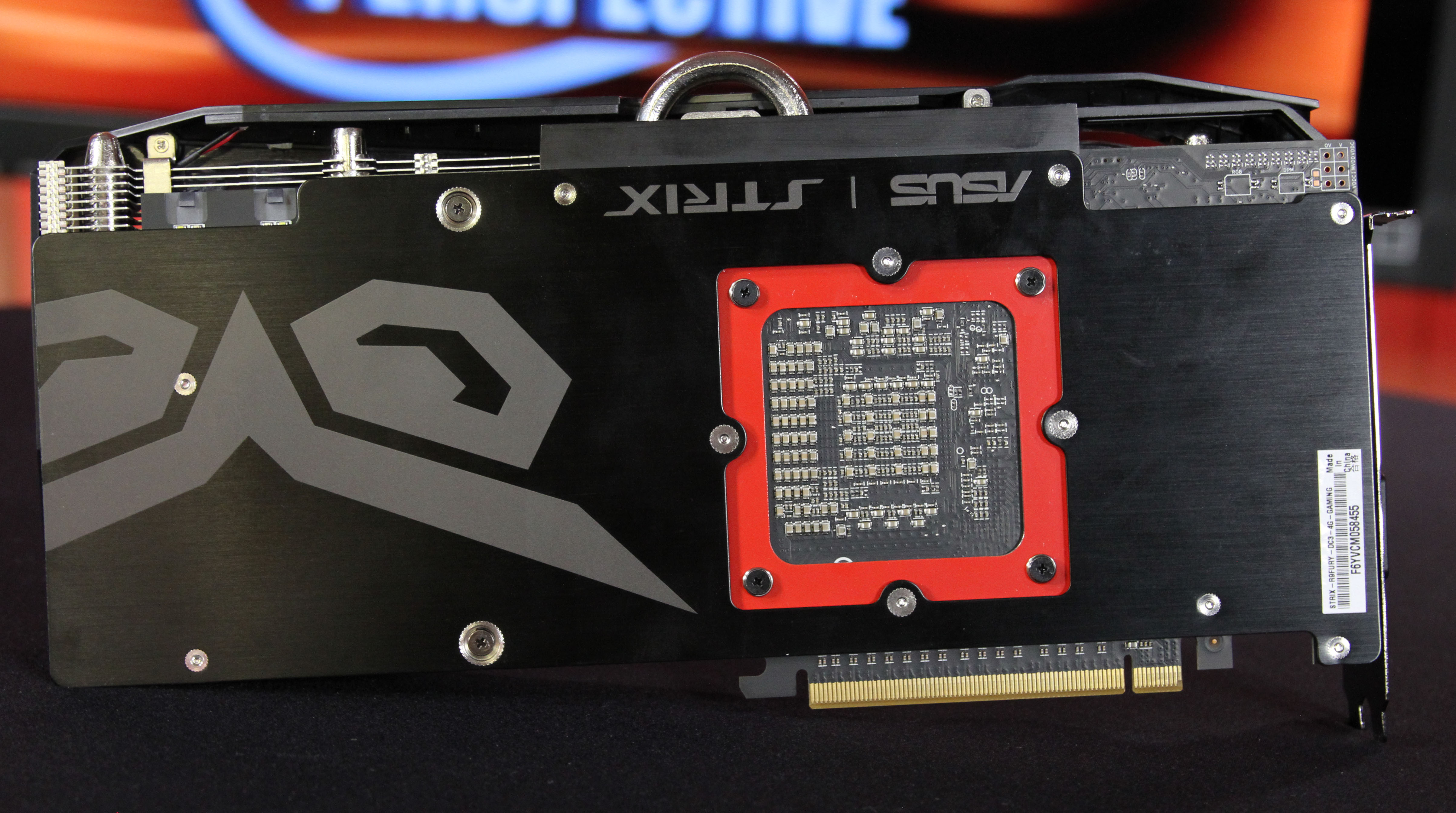 Turning the card over shows the longer PCB that ASUS has built for its iteration of the AMD Fury product. The back plate included helps protect the components on the card while also presenting an interesting style for users that happen to have windows on their cases. Notice the large cutout surrounded by the red plate – that is additional support supplied to the PCB where the GPU is mounted (on the reverse side). Because the GPU is so large with the inclusion of an interposer and HBM chips, this kind of support is definitely welcome but damn… that opening is HUGE compared to the implementation of this feature on the GeForce-based Strix GTX 980 Ti!

Along the top of the card you’ll find an illuminated Strix logo that happens to match up well with the AMD Radeon branding by default. The pair of 8-pin PCIe power connections are located on the end of the board and are reverse facing, making installation and removal a bit easier with the high profile heatsink in the way. Speaking of the heatsink you can definitely tell ASUS left no corner of the design unused – the heatsink fins expand and stretch down into every area possible on the Fury Strix, wrapping around the PCIe power connections and capacitors like a glove.

For display output connectivity ASUS has included the output configuration that matches the GeForce GTX 900-series of products that we have come to appreciate. That means you have a single dual-link DVI connection, three full-size DisplayPort connections and a full-size HDMI port. This gives users the ability to attach quite a few modern displays though does require adapters if you are still looking to attach a pair of older monitors with DVI inputs. 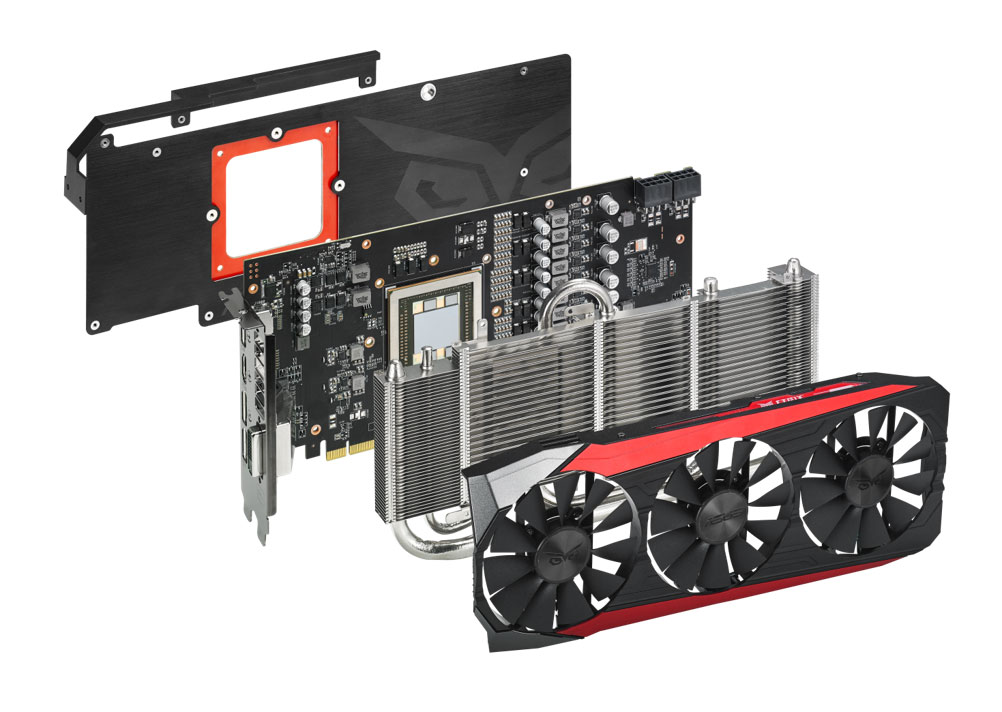 This exploded view of the card, provided by ASUS, shows off many of the features the company is particularly proud of with the design. That back plate shown above doubles as a reinforcement frame and holds the red GPU-Fortifier in place to help prevent PCB warping over time with many hot/cold cycles. The DirectCU III cooler hosts a pair of 10mm heatpipes to keep that GPU running efficiently. 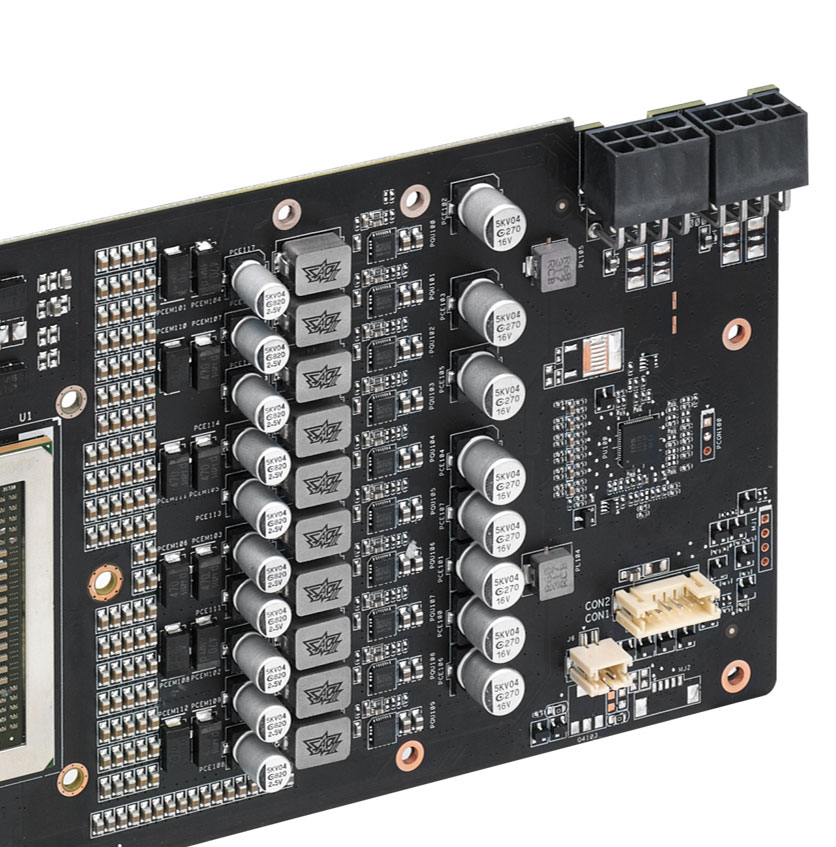 The ASUS Strix R9 Fury is built on a 12-phase Super Alloy Power II design with capacitors that 2.5x the lifespan of traditional caps and MOSFETs built to keep temperatures down and increase power efficiency across the board. ASUS is also keen to avoid the coil whine issues by using “concrete” / filled alloy chokes as part of the Super Alloy Power II branding. 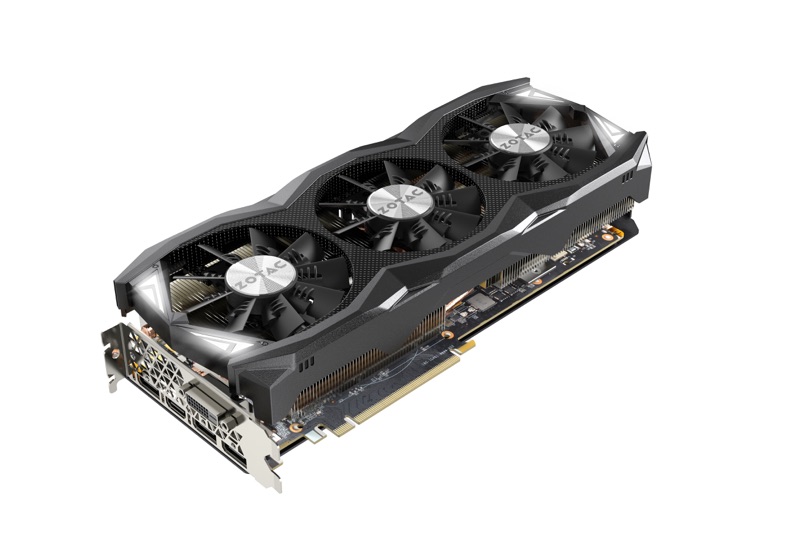 Get it before it’s gone