ASUS bundled the Z170-A motherboard with the latest version of the ASUS UEFI (Unified Extensible Firmware Interface) implementation, a customized version of the AMI baseline UEFI BIOS replacement. The UEFI offers full keyboard and mouse support while using the BIOS pages. ASUS changed the way mouse right-click functions in the new UEFI implementation with right-click having no impact on the screen. By default, the user sees the EZ mode screen when entering the UEFI with the Advanced mode screens accessible via the Exit/Advanced Mode button at the upper right corner of the screen. Advanced mode screens can be set for the default user interface via the UEFI Boot menu as well.

As we've stated in previous reviews, the ASUS UEFI implementation remains among the best out there. The UEFI is very responsive to both keyboard and mouse input with almost no lag or questionable click-space evident anywhere. However, at times the interface seemed too responsive and sensitive to the merest mouse click and movement. The UEFI is designed in an intuitive manner so that both novice and advance BIOS users can quickly find what they are looking for. The EZ Mode screen lays out everything in a highly readable format, while the Advanced Mode tabbed layout displays as you would expect from a traditional BIOS. ASUS also gives you the ability to taken screen captures from within the BIOS by pressing the F12 key with those screen-caps saved in a 1024×768 bitmap format to an attached USB device. From the Tools menu, ASUS houses their collection of of BIOS-related tools and applets, ranging from an UEFI-based updater (EZ Flash3) to their full UEFI profile load and save utility.

With the Z170-A, ASUS integrated the features and changes introduced with their UEFI from the Intel Z97 line, enhancing several features as well as exposing several new features specific to the Skylake-S processor lines. They revised their EZ Mode page with added utility, integrating a customizable My Favorites tab into the Advance mode menu, Shortcut screen, a graphical fan tuning interface, a graphical EZ Tuning Wizard interface, support for display in nine different languages, and a Quick Note interface for adding persistent notes for later use. 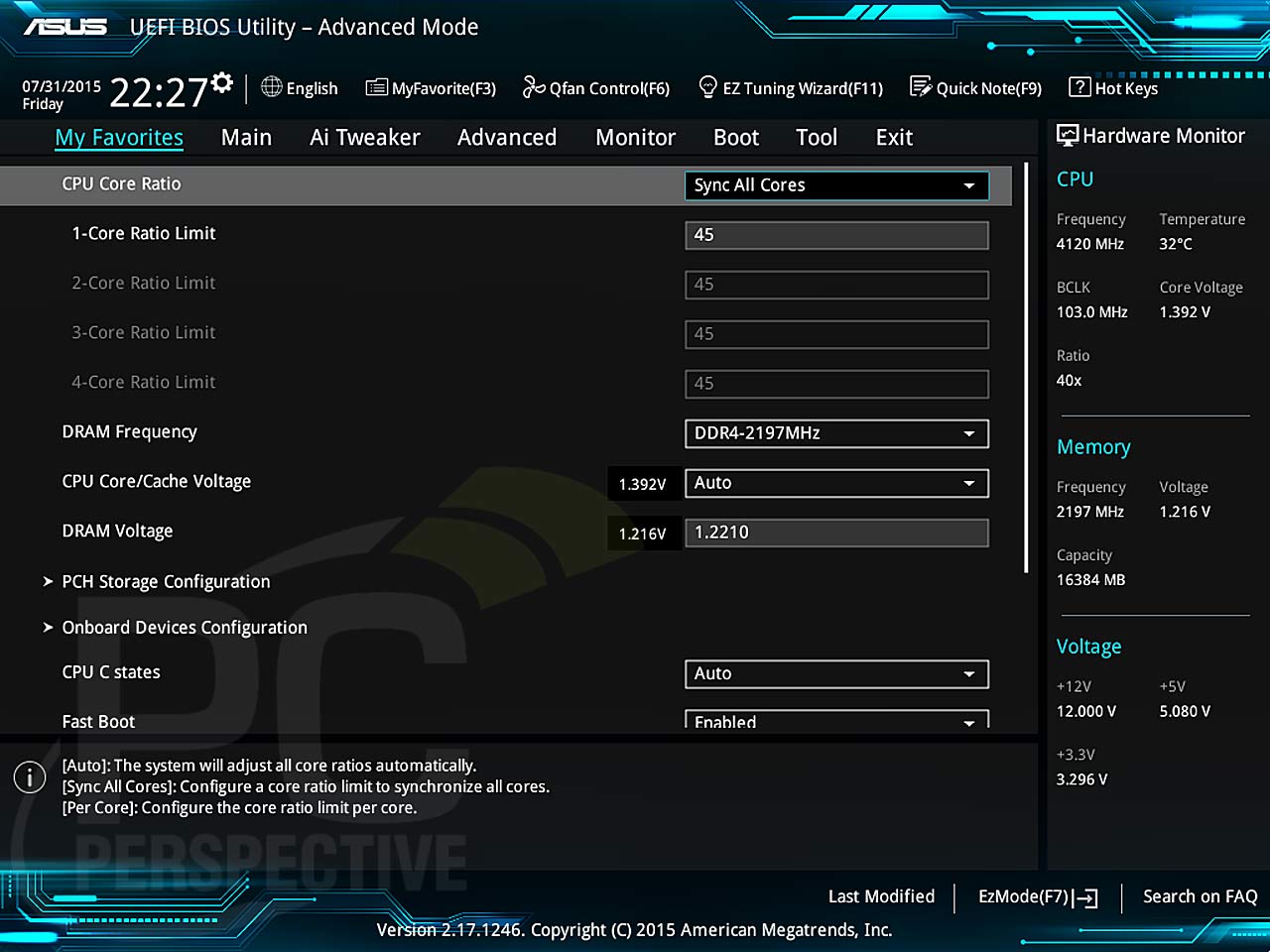 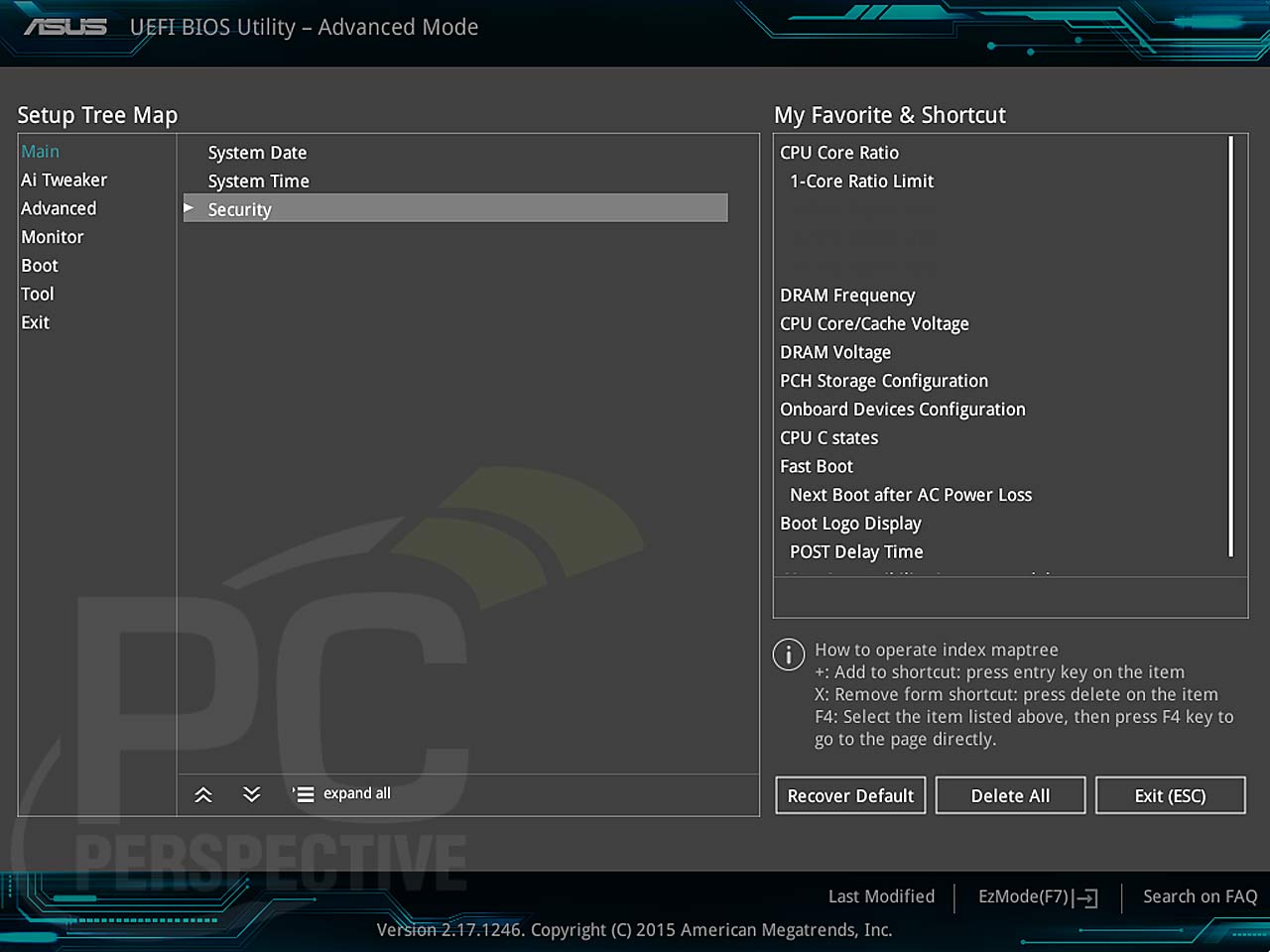 The My Favorites tab houses user selected settings for access to these from a centralized location. To access, select the My Favorites tab from within the Advanced Mode interface. Note that if a menu or sub-menu is added to this page, all fields on that page will be added. The real strength in this My Favorites tab implementation comes with the ability to mix and match commonly used options in a central location, rather than having to hunt them down through multiple sub-levels of menus. 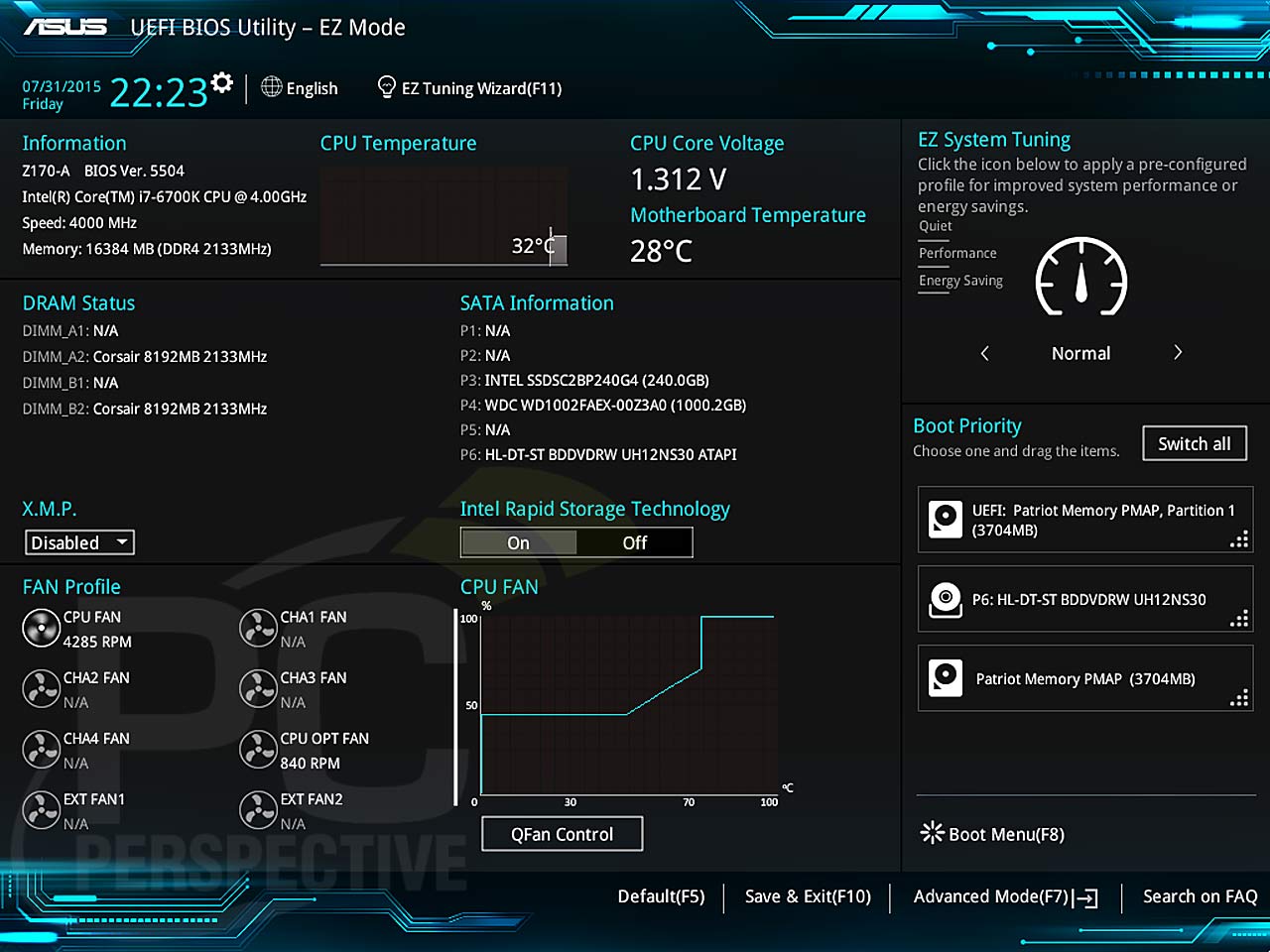 The EZ Mode page presents information organized into sections in an easy-to-read manner for those users who do not want to be bothered with the labyrinth of the Advanced Mode settings. 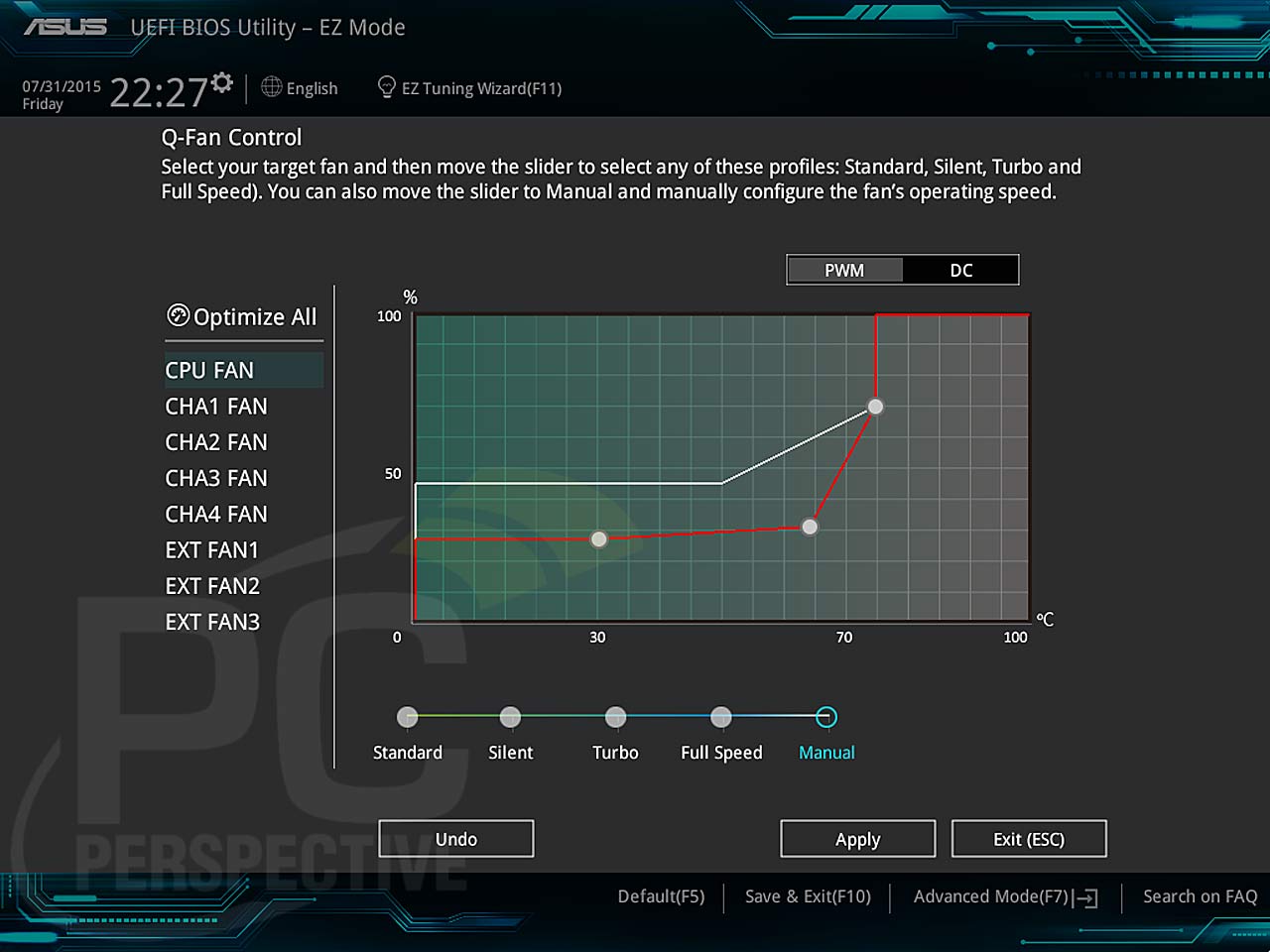 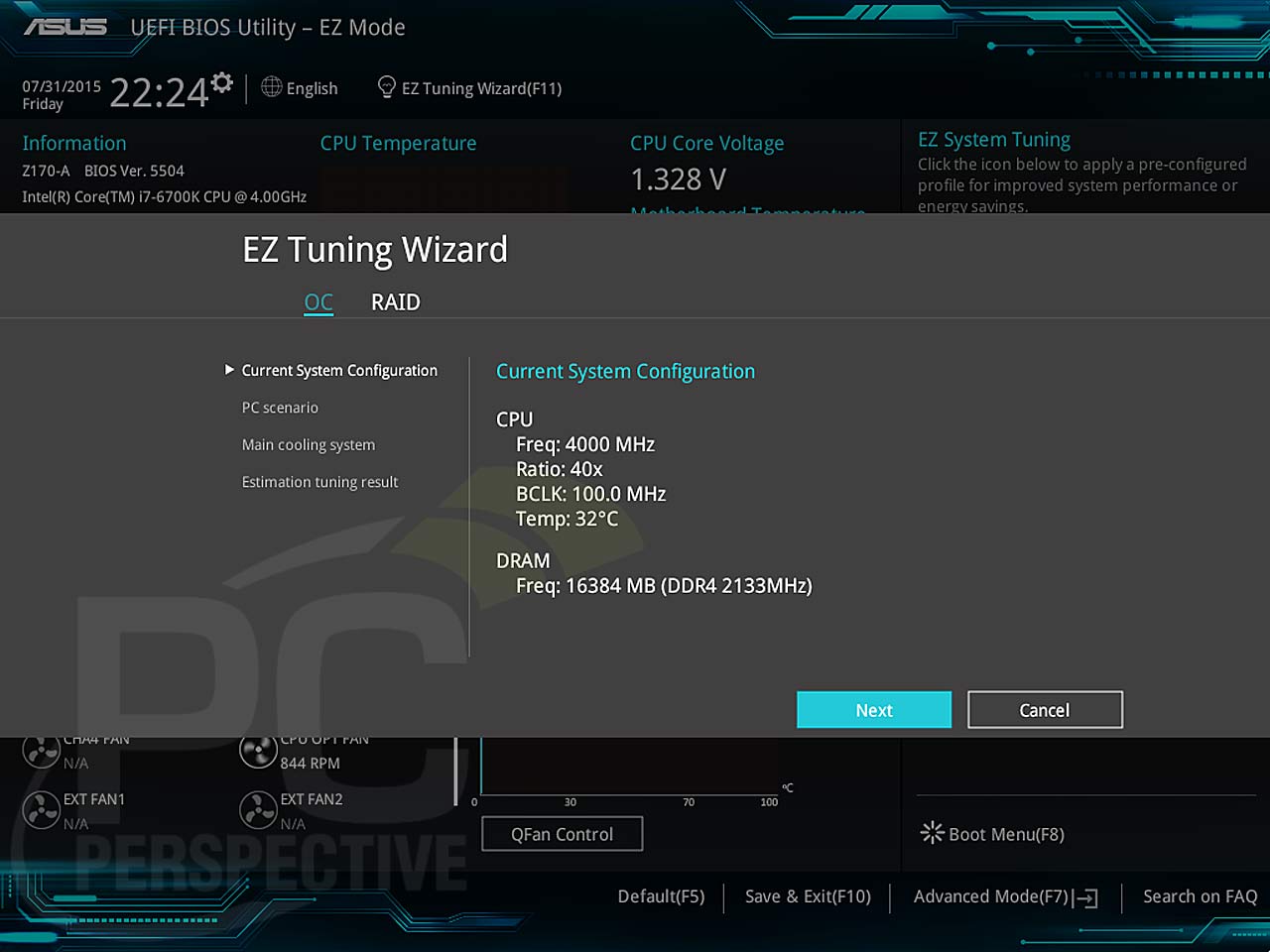 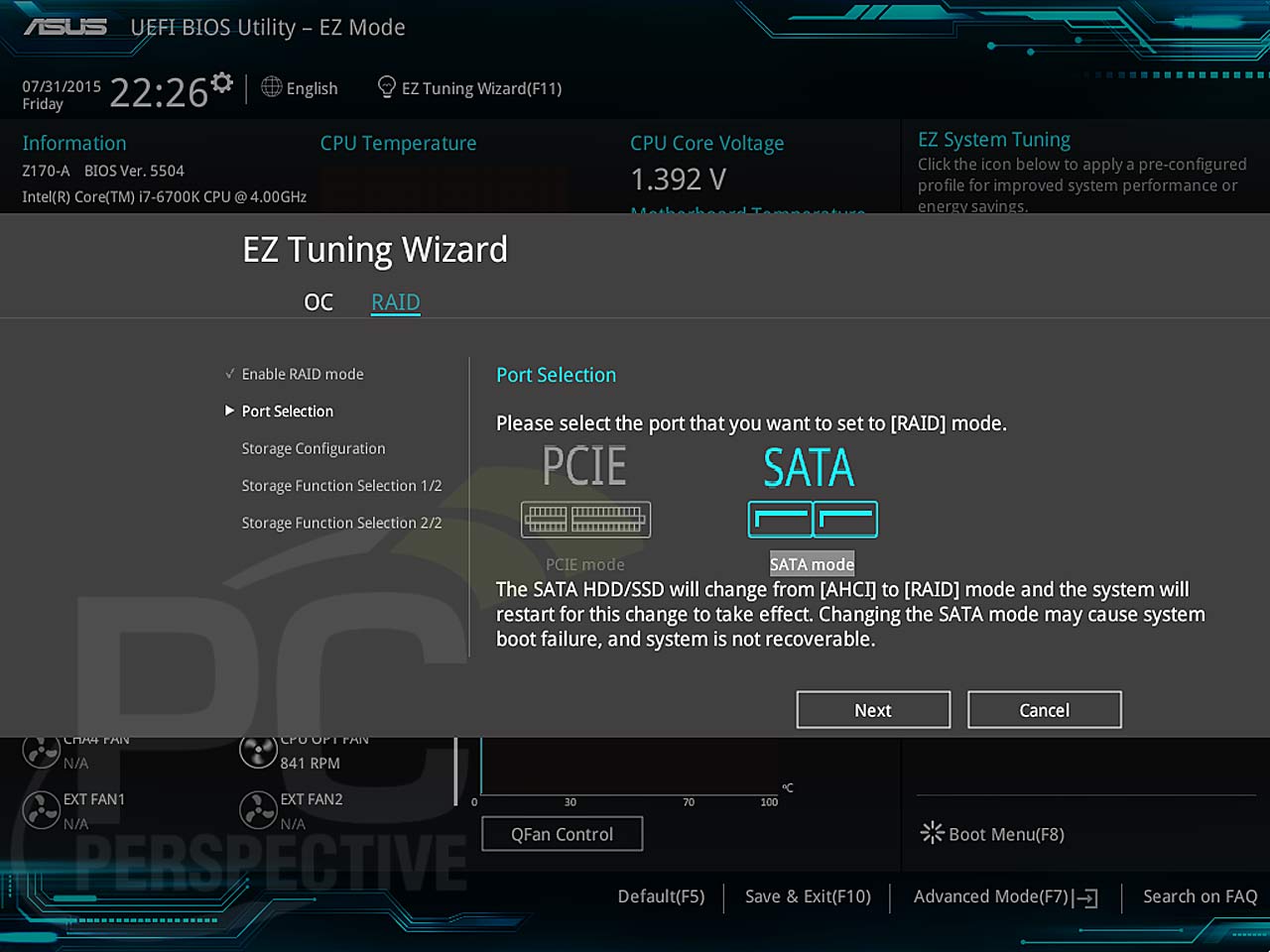 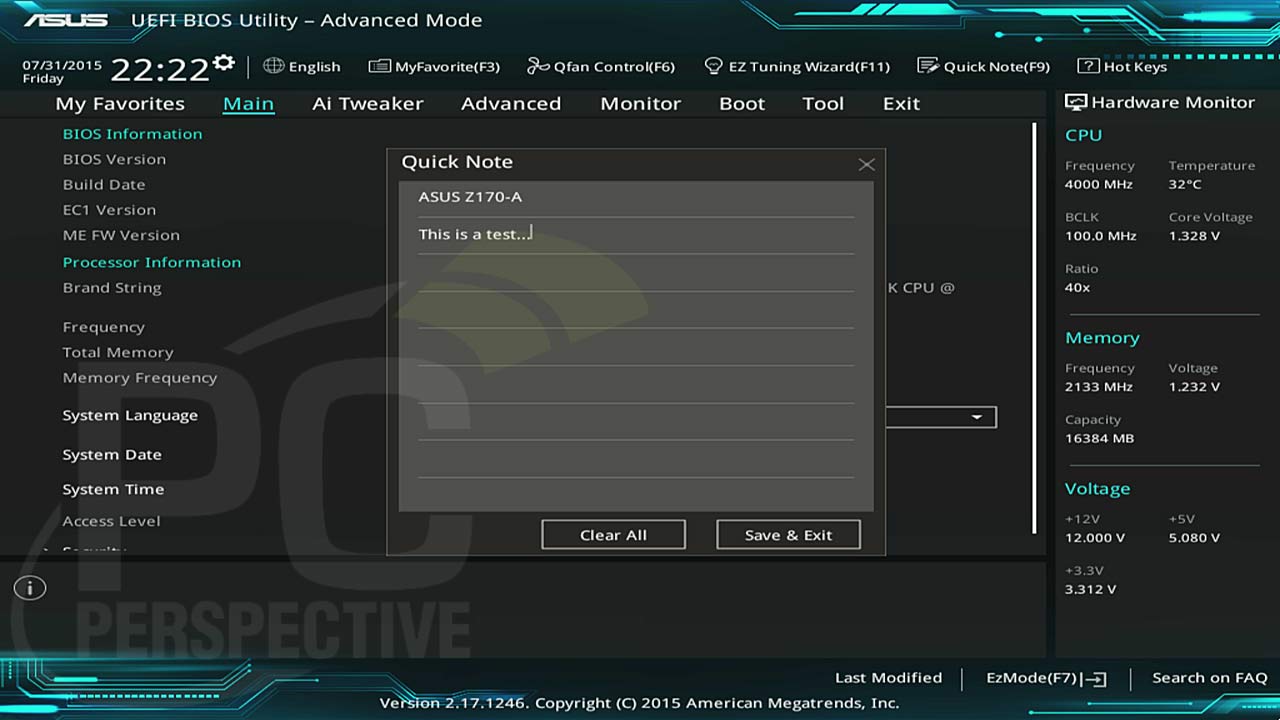 The Quick Note window is accessed by clicking the Quick Note field in the top menu bar or hit the F9 function key. From this window, you can enter notes that remain persistent between BIOS sessions. This functionality is only available from the Advanced Mode interface. 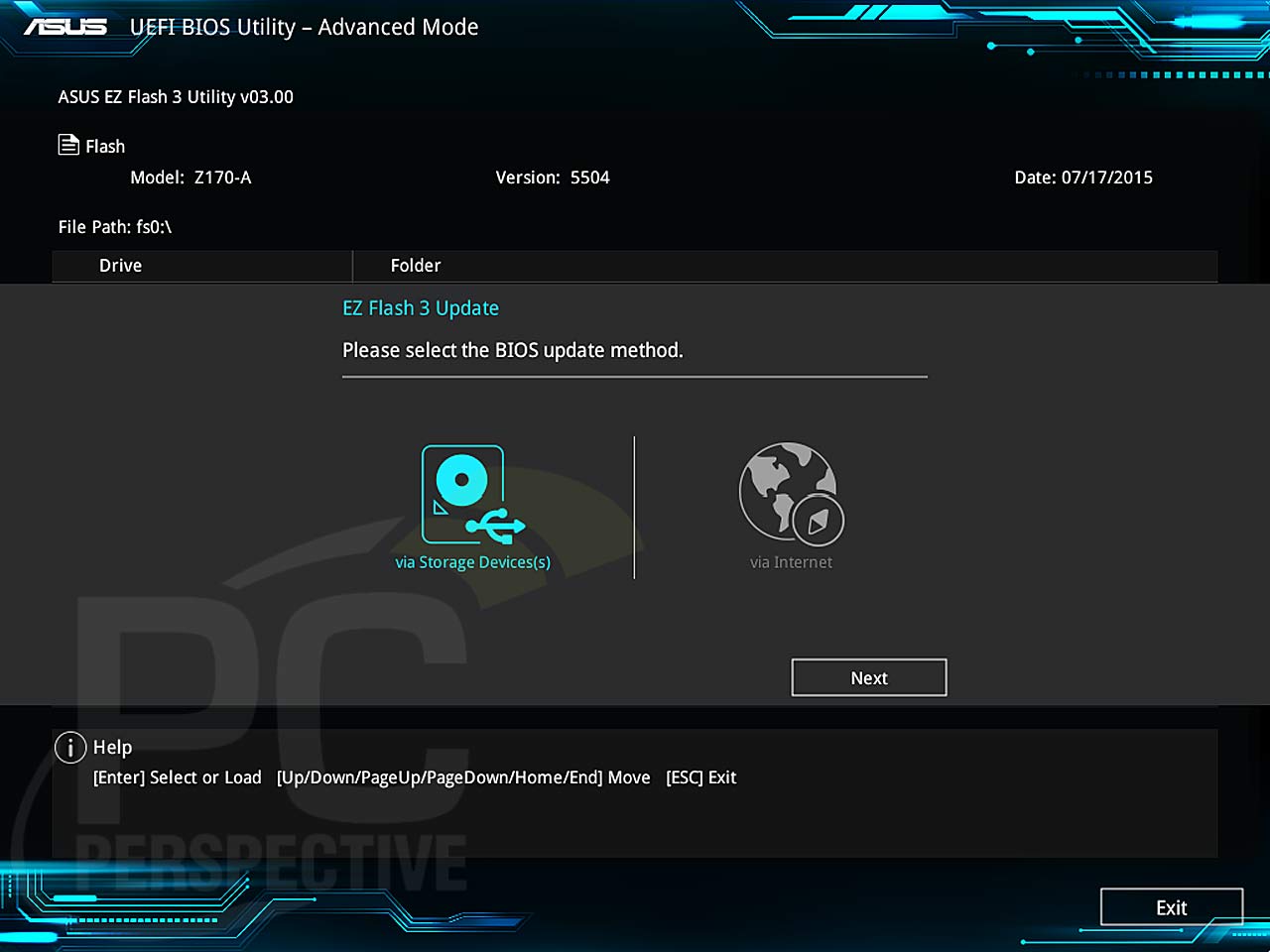 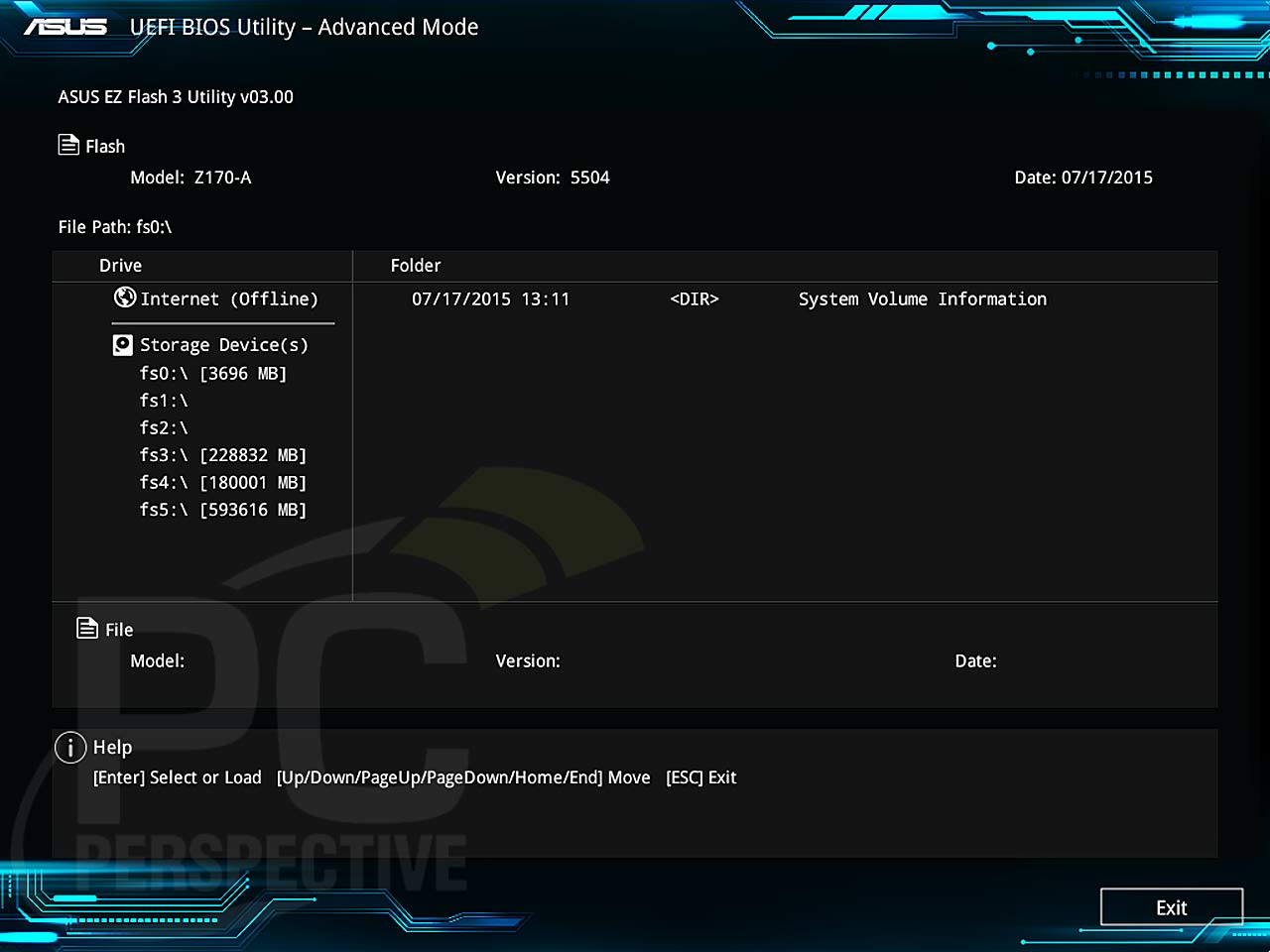 The ASUS EZ Flash 3 utility was updated, allowing for BIOS update via an attached drive or through a network connection. When selecting the network update method, the utility launches a network connection wizard for getting the most up to date BIOS file from the ASUS servers. 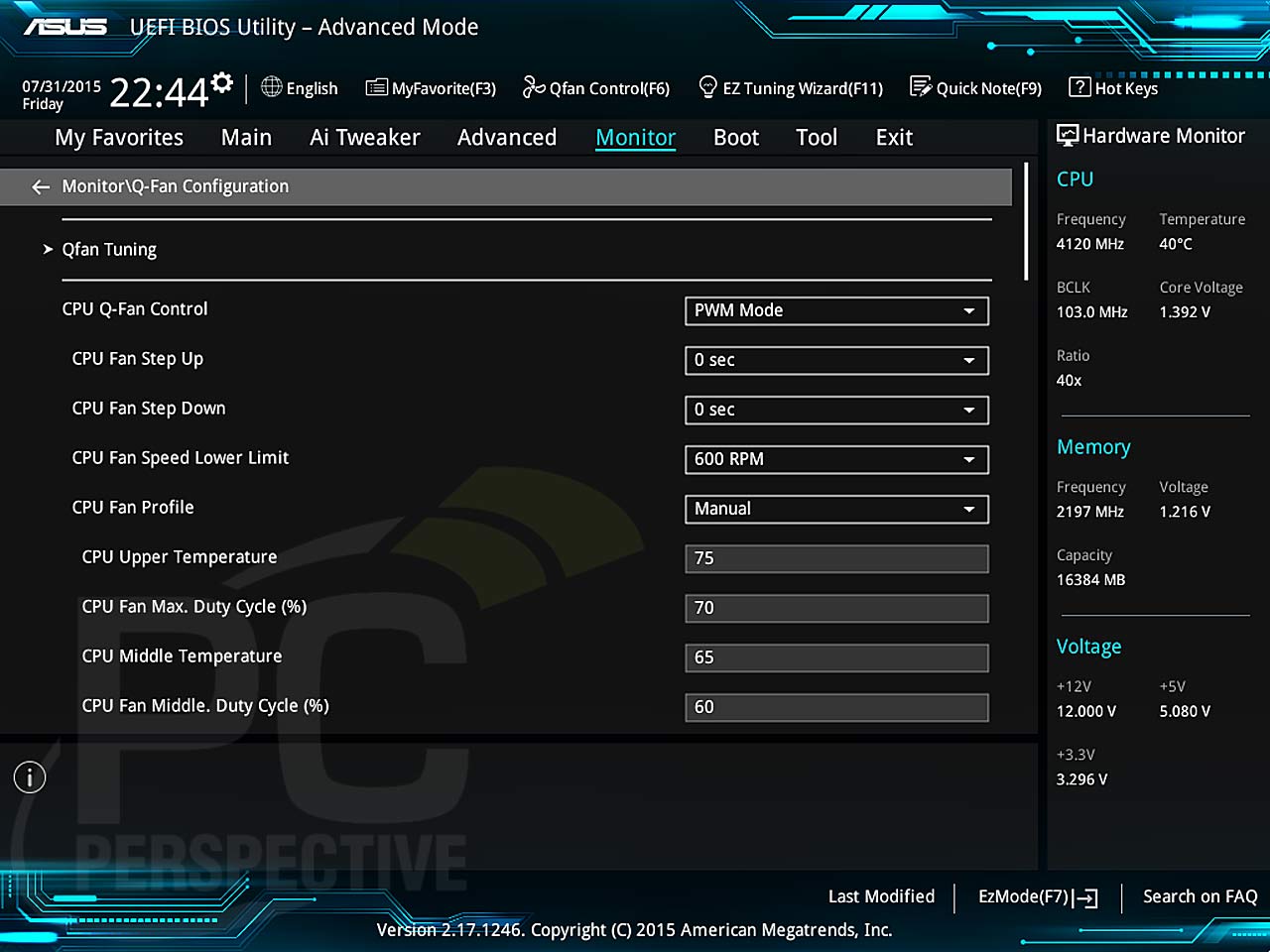 ASUS enhanced their Q-Fan control capabilities in their latest UEFI version, allowing for user configurable pauses in between when the BIOS detects a change in threshold temperature and when the BIOS increases the header fan speed. As with previous version of the UEFI, the user is able to set temperature thresholds and fan speeds (based on percentage run speed) for the board's fan headers. 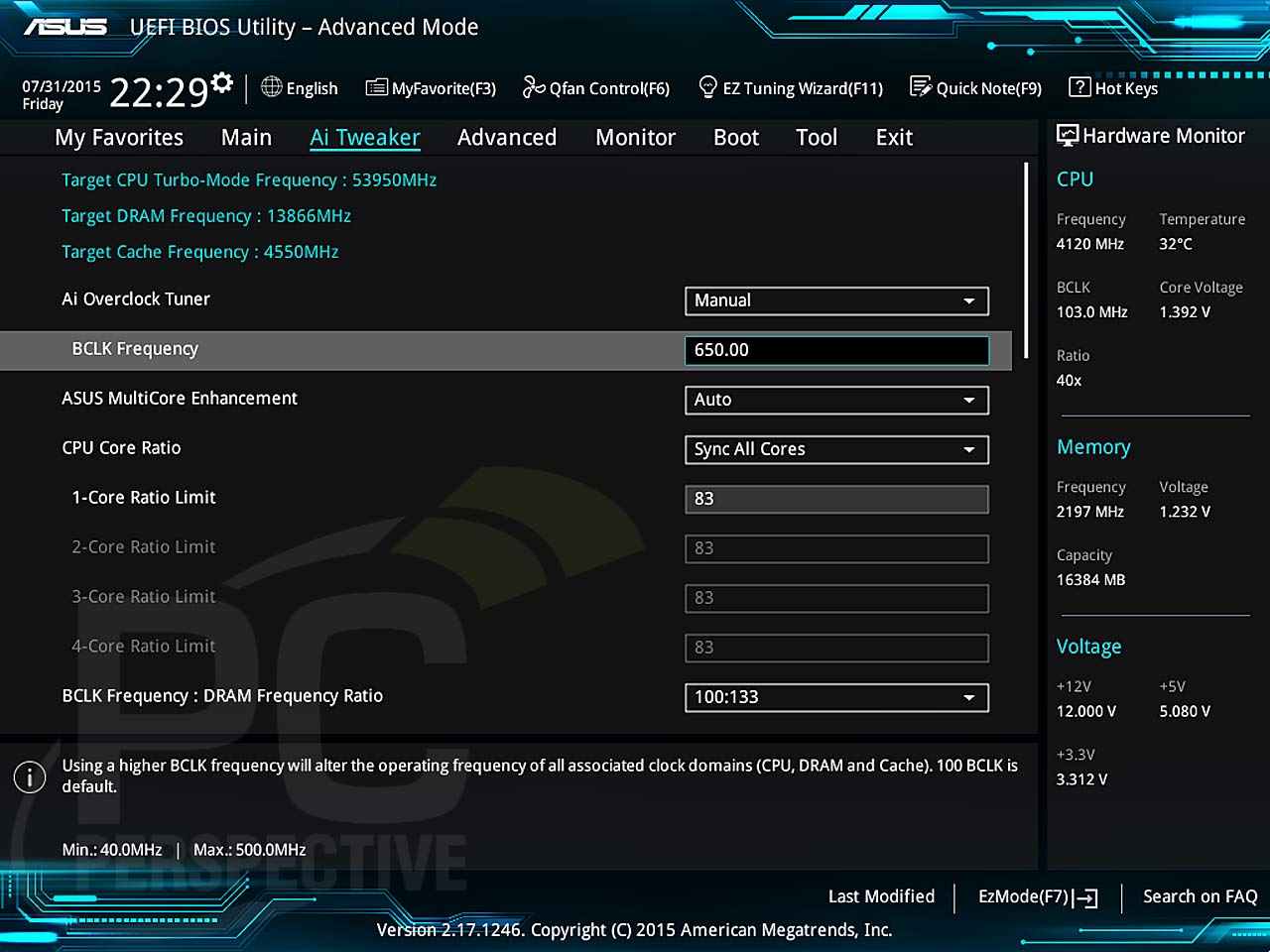 For the Z170 Express boards, ASUS opened up the CPU back clock settings with user capable settings up to 650MHz. This is because of the decoupling of the PCI and DMI bus from the base clock with the Intel Skylake processors. 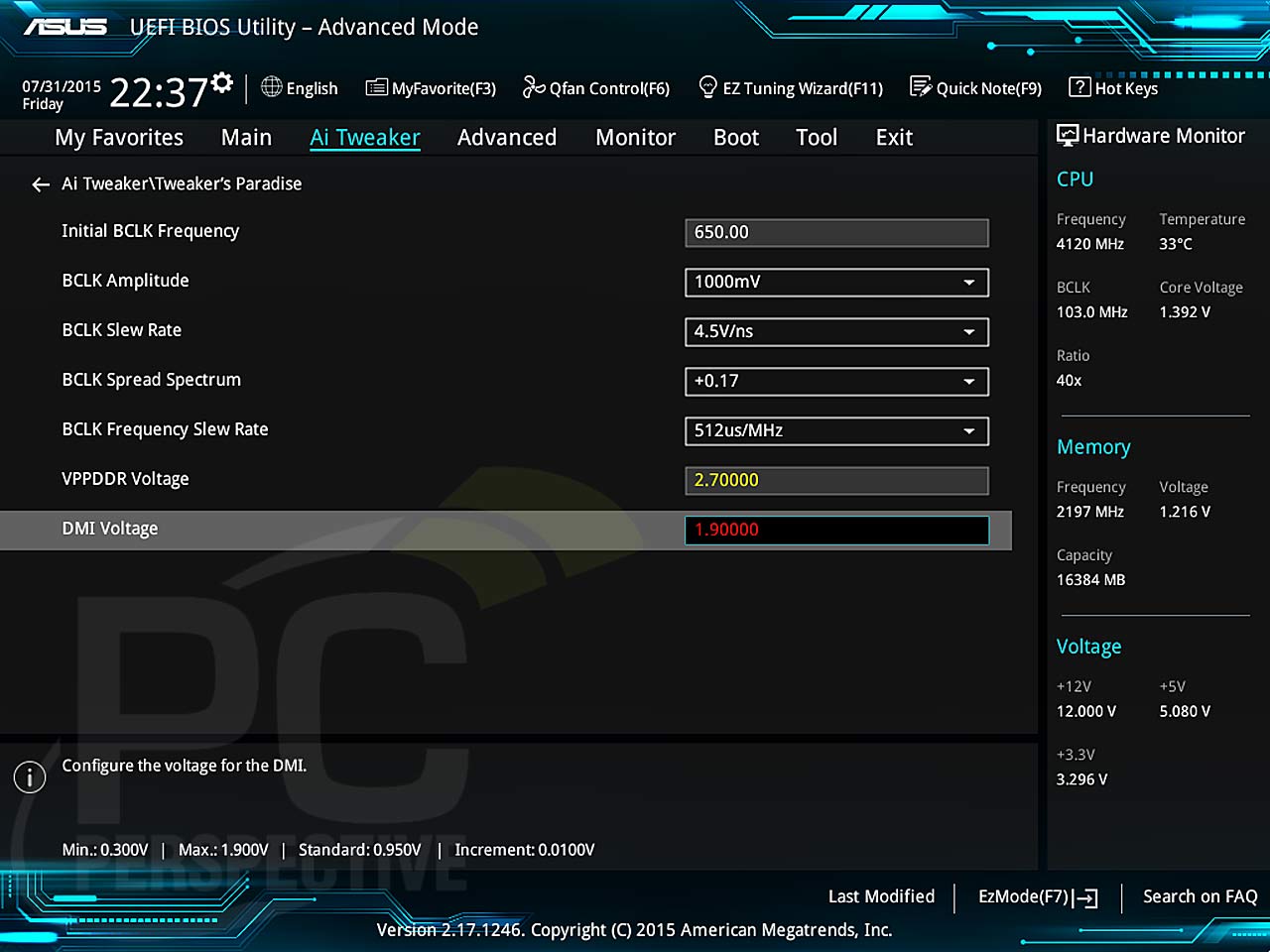